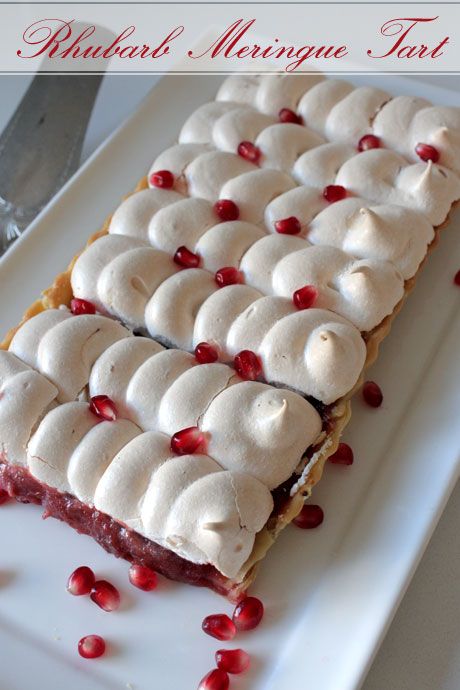 I'm pretty good when it comes to shopping now. However a few years ago it was an entirely different matter and I was firmly involved in the concept of retail therapy. When I worked in the corporate sector I absolutely loathed my boss and to compensate I used to shop like a demon buying things in every colour, stopping only when my arms were too tired to carry the shopping bags (I am living proof that it is possible to get rope burn from those fancy shopping bags if you are carrying a dozen of them). Buried under the weight of shoes, handbags and clothes I would collapse into a taxi and head back home. I know it was wasteful but I loved the boxed, tissue paper wrapped goodies and fancy bags and opening them up would be like opening up a present (albeit one that I had myself paid for).

Now I'm a much cannier shopper. Gone are those days (and I do miss them in a way) and whilst I still buy these things I don't buy one in every colour or blow thousands in a day. I weigh up my options and wonder "Will I really get any use out of this?". Shoes are the exception as are bags (I'm sticking with the investment theory ;) ) but clothes are always judged based on the number of wears and versatility -hats of course are not included, they're my indulgence. 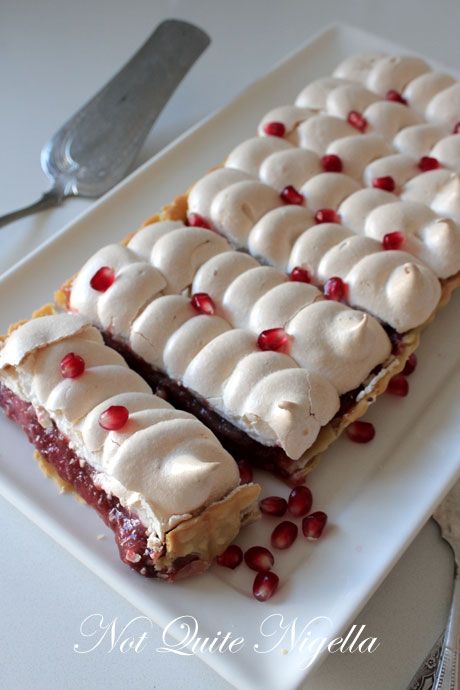 And as my collections grow, my kitchen cupboard space shrinks and I need to apply the same rule ruthlessly to kitchen equipment. Each potential purchase is weighed up and if it's a single use item then I don't buy it (which is why I don't have a friand tray). One thing that slipped through the cracks is this rectangular tray that I've only used twice for a white chocolate and raspberry tart and a leek and cheese flan. So I thought that I would find a recipe where I could use it and this version of a lemon meringue tart using rhubarb seemed right in order. 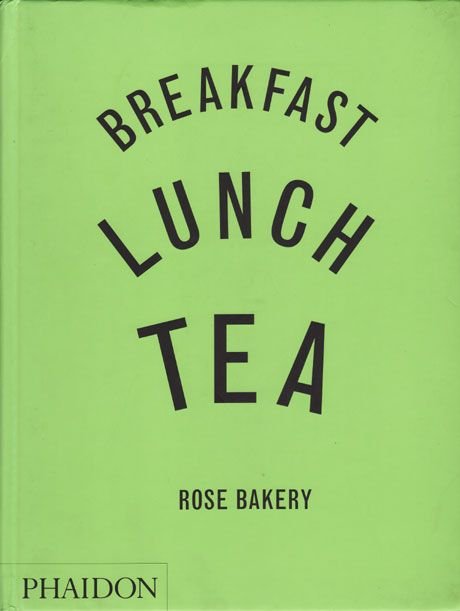 This recipe is from the Breakfast, Lunch and Tea cookbook by Rose Bakery that Phaidon publishers sent to me a while back and was originally given as a tartlet recipe. The Rose Bakery is a famous bakery in Paris in Rue des Martyrs (what a great name for a street!). Rather oddly, it is a British inspired bakery that does a roaring trade in Paris.The husband Jean-Charles is French and the wife Rose is British and I'm sure it's a brave move to open up a bakery in the land of baked goods and pastry. Would the French even want carrot cakes or Eton Mess when they have a plethora of pastries and cakes? Apparently they do and now they sell out of everything that they make and recently catered for Commes Des Garcons at Paris Fashion Week (Rei Kawakubo is a relative). 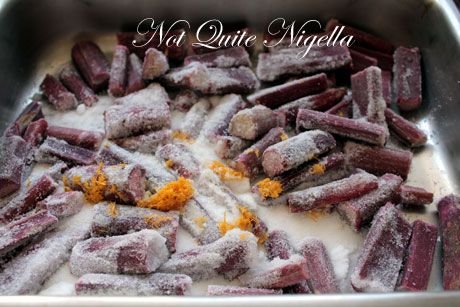 I reduced the amount of sugar from the original recipe as I wanted it to be slightly tart in comparison to the sweet meringue. I also found that I didn't need anywhere near as much meringue as specified given how I piped it however if you want a giant cloud of meringue of course feel free to go the whole 6 egg whites and double the rest of the meringue ingredients (and don't forget to swap around your oven racks to accommodate the huge meringue cloud). I also used a bought shortcrust pastry as I didn't have time to make my own and rest it. I dressed it simply with some Royal Pom pomegranate seeds to give it a jewel like quality.

So tell me Dear Reader, are you a good shopper or a spendthrift?

Adapted from the Rose Bakery cookbook 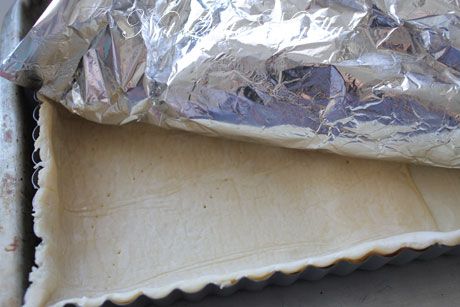 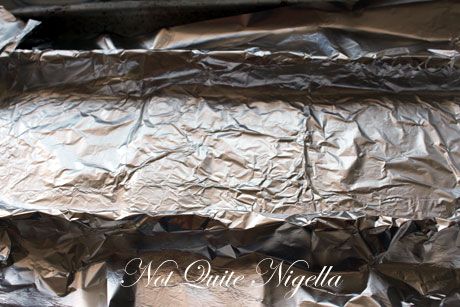 Step 1 - Preheat the oven to 180C/350F/ Gas mark 4. Place the pastry in the baking tin and lightly prick all over with a fork including sides  and line with foil. Place ceramic beads of dried beans or rice on the foil and place in fridge. 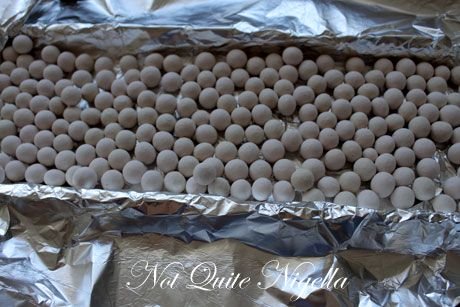 Step 2 - Meanwhile, place the rhubarb, sugar and zest in a baking dish and cover with foil. Bake for 20-30 minutes until it is soft and a syrup is formed. Remove from oven, mash and cool. 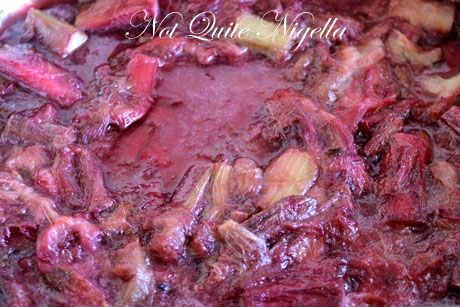 Step 3 - Increase heat to 200C/400F. Take out the baking tin from the fridge and bake in the oven for 15-20 minutes until it is partially baked. Remove the weights and foil.

Step 4 - While it is baking, whip egg whites until soft peaks form and then add caster sugar one tablespoon at a time until shiny stiff peaks are formed and you can tip the bowl upside down without it moving. Fold in cream of tartar and white vinegar well. 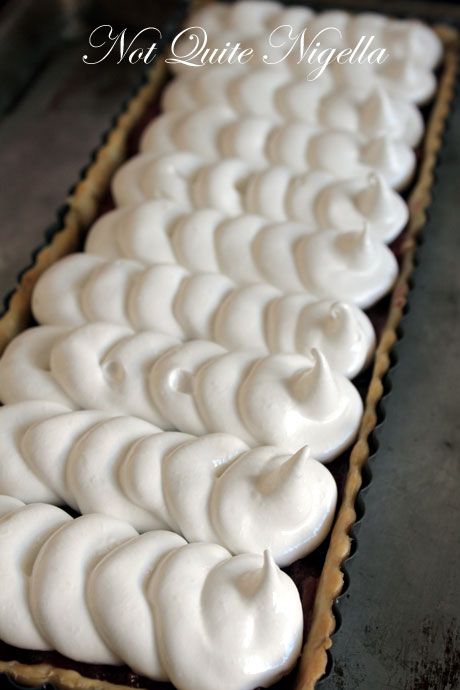 Step 5 - Spoon the rhubarb mixture into the baked case and then fill a piping bag with the egg white meringue mixture with a plain 1 cm nozzle (or you can use a star tip too) and pipe in swirls-I did this pattern so that it would be easy to portion out but you can do whatever pattern you like or you don't even have to use a piping bag and you can use a spatula and make pretty hedgehog patterns.

Step 6 - Bake for 20-25 minutes until the meringue turns a light brown and is slightly crisp. 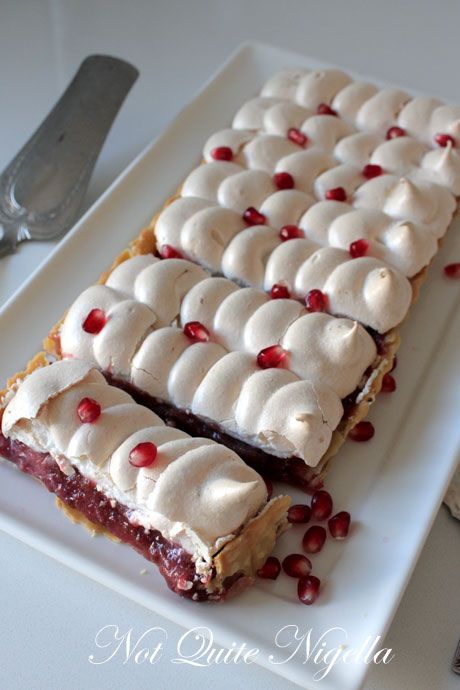