How To Cook The Perfect Steak! 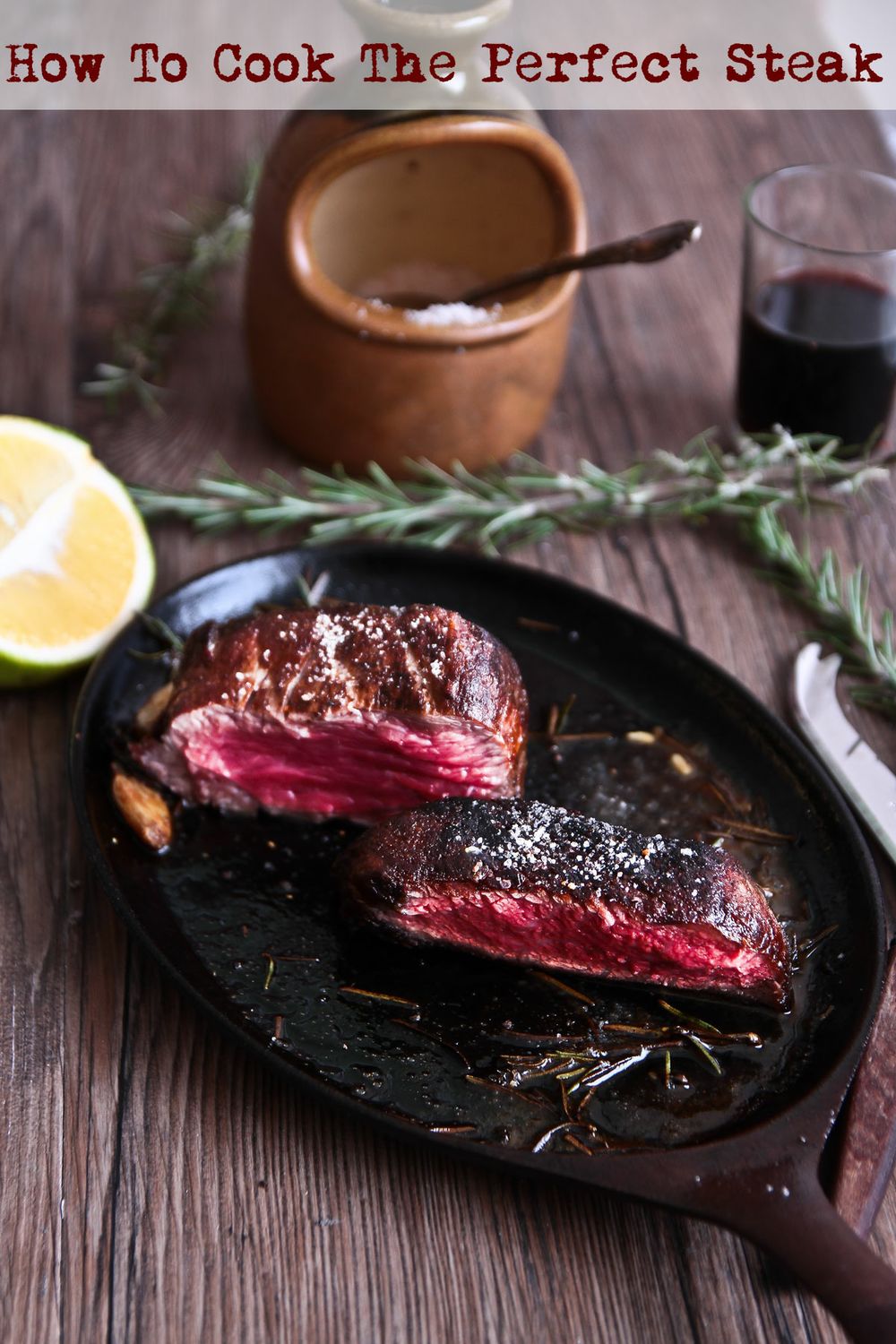 I had just joined a conversation at a party. The three other people  were discussing someone animatedly. It took me  a few minutes to realise that the person that they were talking about was indeed a friend of mine because from the way they described her, she sounded like a bit of a pain in the bottom.

"She swans around and does nothing and spends her husband's money and she lives such a perfect life it makes me sick" one said.

"I know, I bet those kids of her don't even misbehave. I'm sure there's a nanny there that looks after them if she needs to go shopping anyway."

"And she just bought another new car, why did she need the new one? What was wrong with the old one? Ugh!" one of them said dramatically with a hand gesture that suggested gagging. 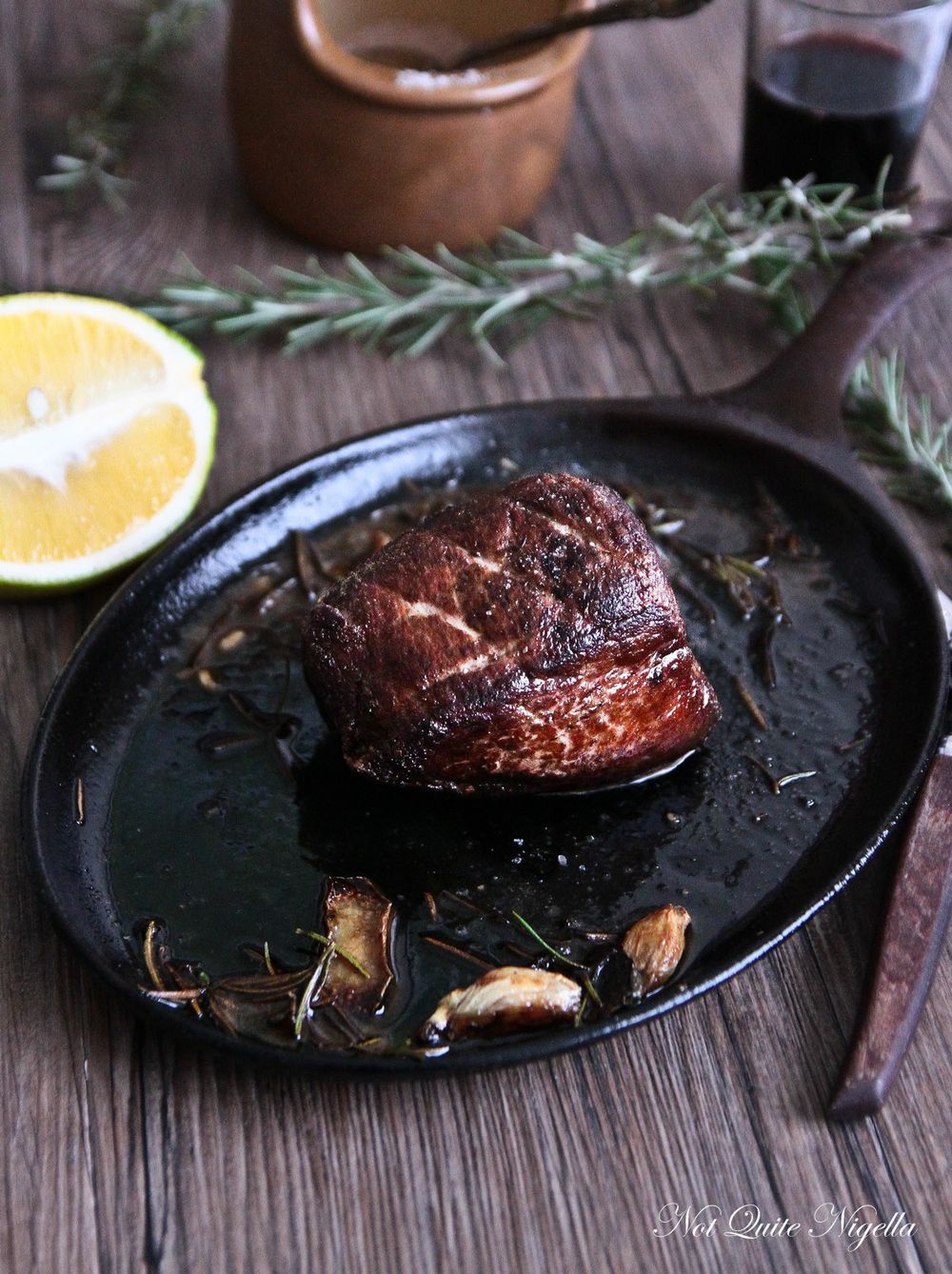 After a few minutes, I realised that they were talking about a friend of mine. She certainly wouldn't class her life as perfect and I know her well and I know that it isn't. She's polished but her house is as chaotic as mine and her life is about as topsy turvy as mine. She's has had as many challenges as most of us in her life (eating disorder, crazy family and career stalling). Being polished is just her way. Her mum is polished and her grandmother is polished. There is no such thing as having a perfect life. In fact, someone I know once told me that they thought that I was a housewife that had a filthy rich husband and that I wrote the blog as a hobby. Picking up my jaw off the ground I had no other reaction but to laugh at the absurdity of it all. If only! 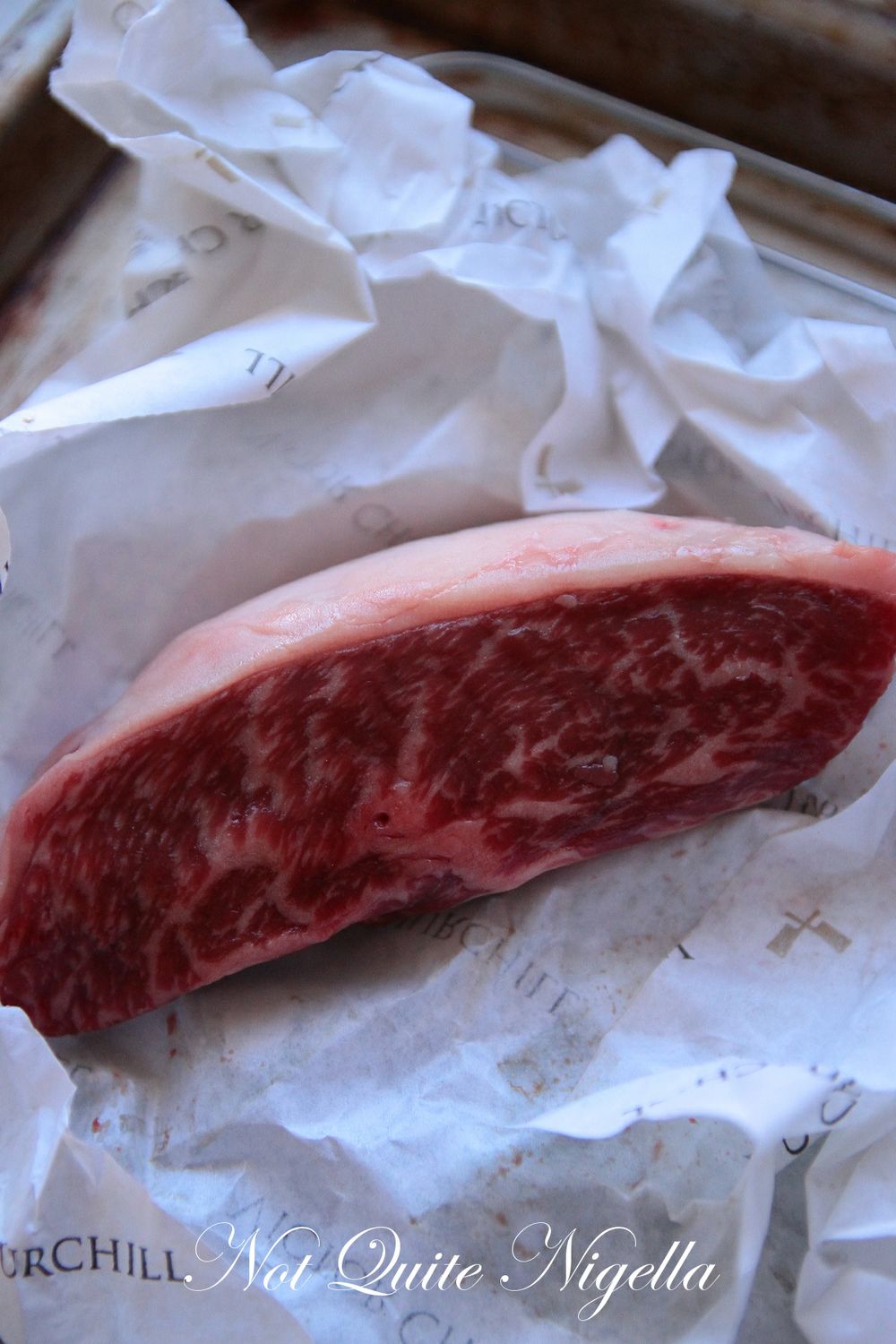 Perfection doesn't exist in food either although when you eat something, you can feel that you come pretty close. A couple of months ago, I had a steak in Buenos Aires and it was one of the best steaks that I've ever had. They cooked it the Heston Blumenthal way from How To Cook Like Heston which flies in the face of how we are traditionally taught to cook steak. You first age the steak in your fridge which just means that it sits uncovered on a wire rack for two days in the fridge. You then heat the pan to high and make sure that it is as hot as you can get it (after removing the smoke alarm batteries-I learned that from experience!). Pour a little oil into the pan, salt the steaks and then cook them turning them every 15-20 seconds. This produces a reaction called the Maillard reaction where the proteins and sugar react and form a crunchy crust on the outside and the meat remains tender and soft inside. 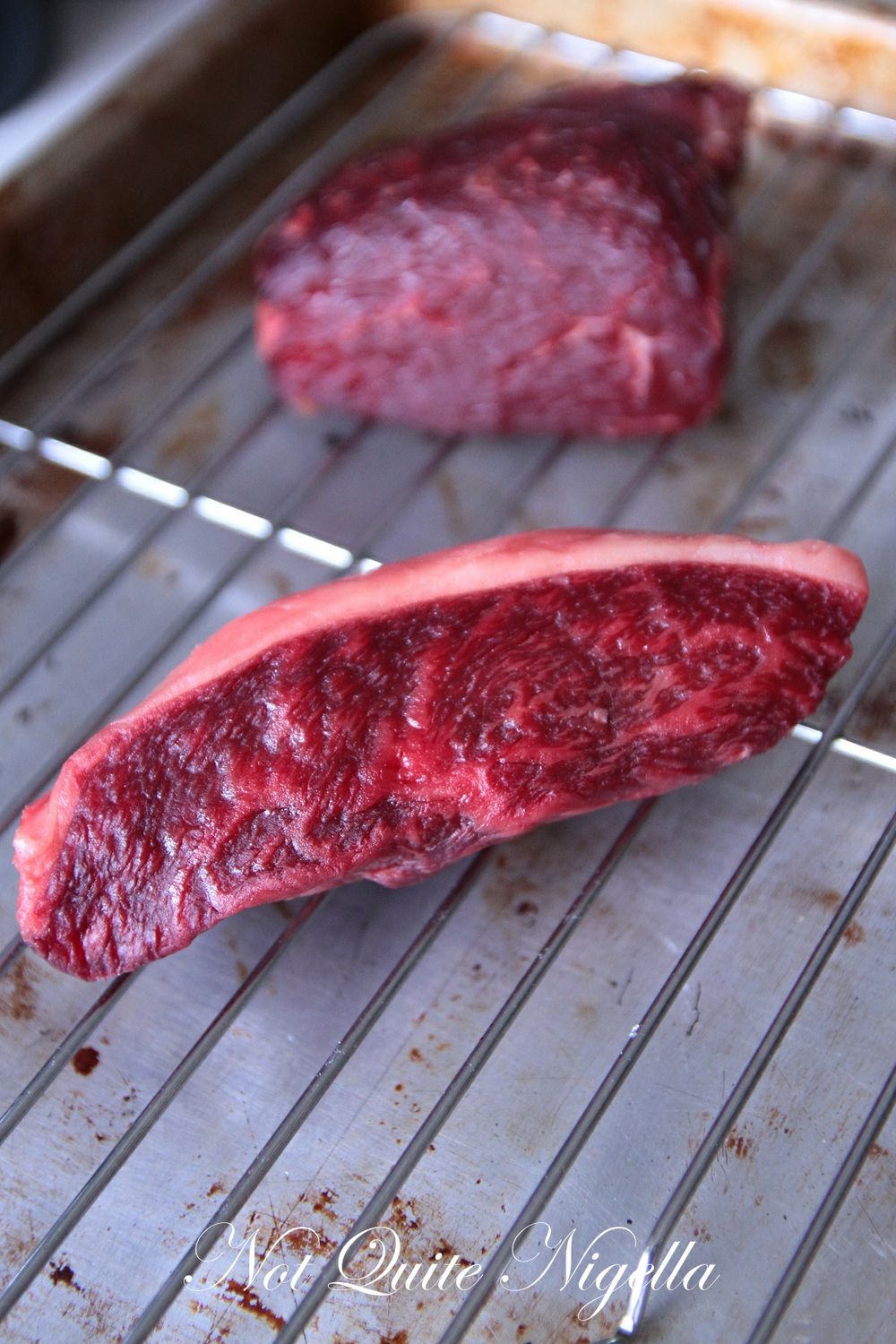 The steaks after ageing-the colour concentrates along with the flavour

I decided to try it for myself and bought two nice quality steaks, one a rib eye grass fed and one a wagyu rump cap, both with a 9+ marbling on them. The steaks themselves weren't inexpensive but each steak ended up being about $15 each which when you compare it to eating out, is very reasonable given the fantastic cuts of meat. The clerk suggested cooking the wagyu slightly longer to allow til it reached medium to allow the marbled fat to melt. I took these home and followed the ageing instructions and then cooked the steaks. After resting them for 5 minutes (I was a bit too impatient to wait the 10 minutes), I sliced into one. It was perfect-ahem scratch that, it was close to perfection! Because as we know, there is no such thing as perfect ;)

So tell me Dear Reader, what is your favourite cut of steak and do you have any steak cooking tips? How do you eat your steak? And whose life would you like to lead or take a peek into? 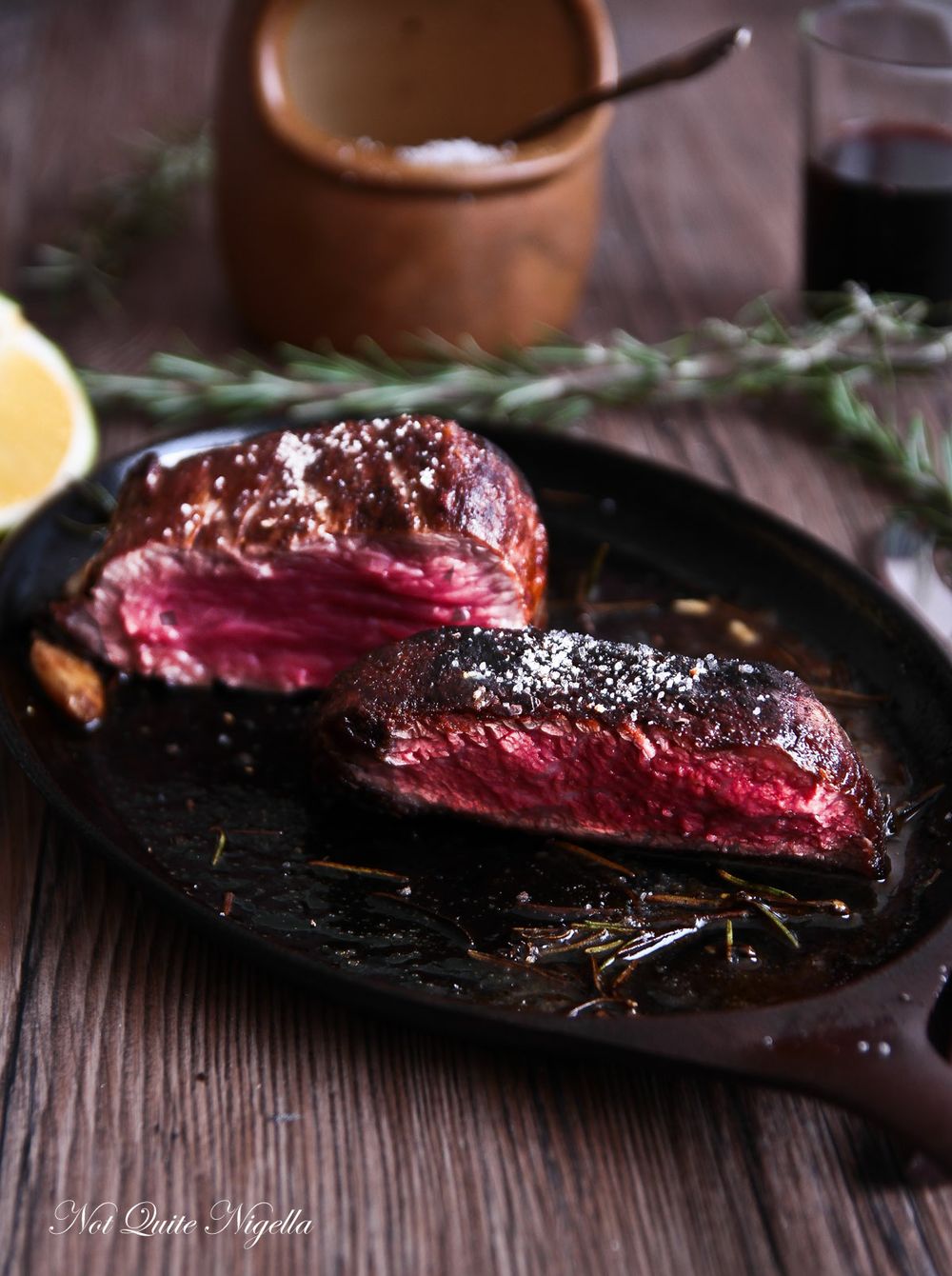 How To Cook The Perfect Steak

Adapted from Heston At Home 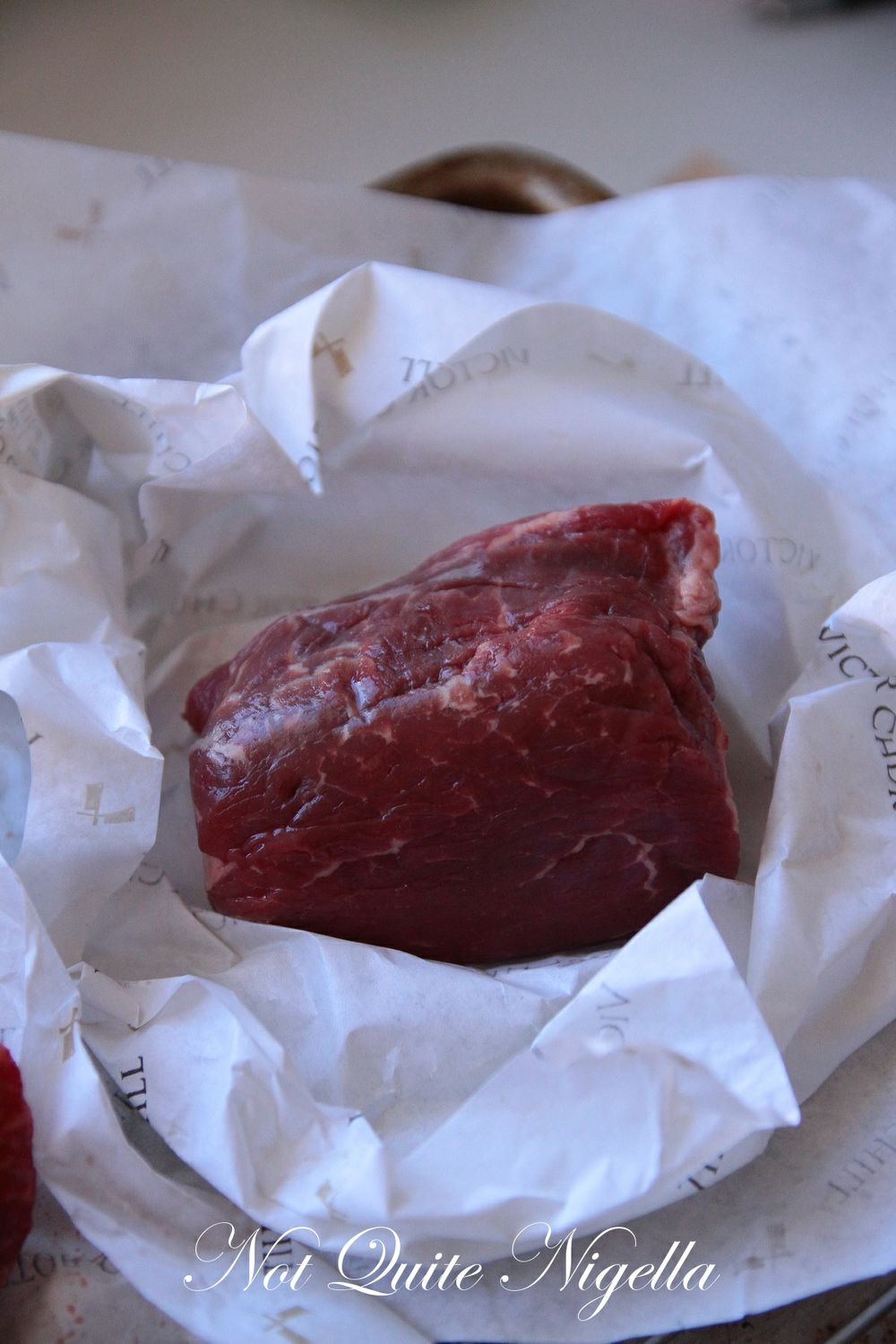 Step 1 - Even though the steaks take about 5 minutes to cook, the ageing process takes two day in your fridge which concentrates the flavour in the steak and evaporates the water. Unwrap the steaks and place them on a wire rack over a tray and allow to age in the fridge for 2 days uncovered. By the time they are ready, they will have formed an almost waxy layer on them and you can touch them without feeling any moisture. Take the steaks out a couple of hours before you want to eat them to allow them to reach room temperature. 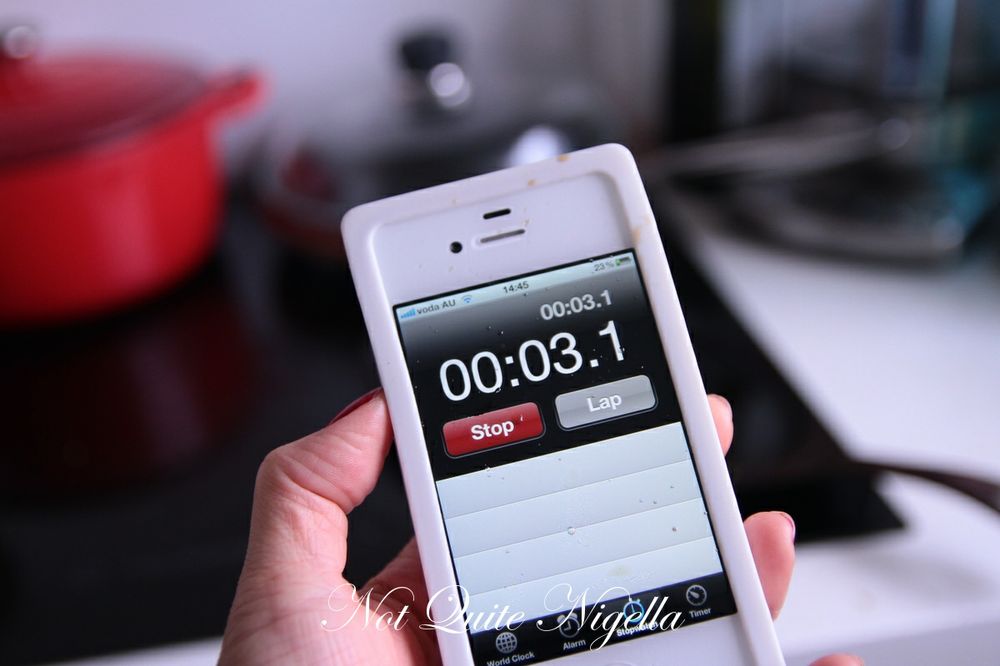 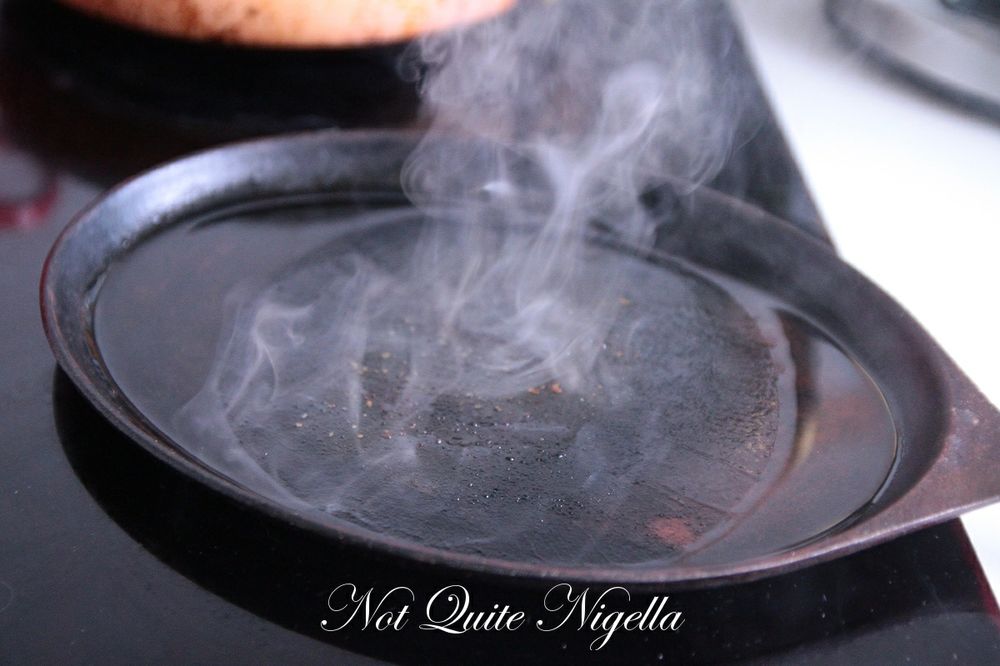 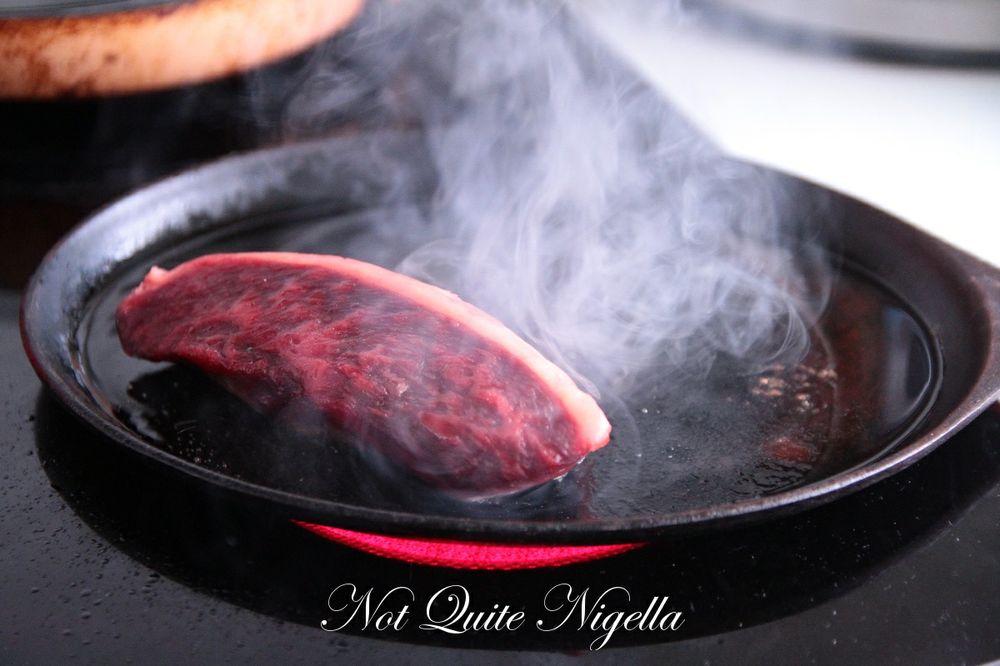 The beef hitting the pan

Step 2 - Heat a cast iron frypan to as hot as you can get it. I also caution you to remove the batteries from your smoke alarm because this can smoke like mad and I don't want you to get a fine from the fire department. Heston even warns that it will feel like you might burn your house down but you won't. My smoke alarm went crazy and I am not tall enough to reach it so I just kept cooking and flipping the steak like a mad woman. But luckily all my neighbours weren't at home or they might have evacuated and I would have felt terrible because all I wanted to do was cook a perfect steak.... Sprinkle some salt but not pepper on the steak and add a layer of oil to the pan. I took my iPhone and set it to countdown. Place the steak on the pan and allow it to cook for 15-20 seconds. Then turn it over and cook it for 15-20 seconds on all sides always turning every 15-20 seconds. I cooked the eye fillet for 5 minutes and the wagyu rump cap for 6-7 minutes. 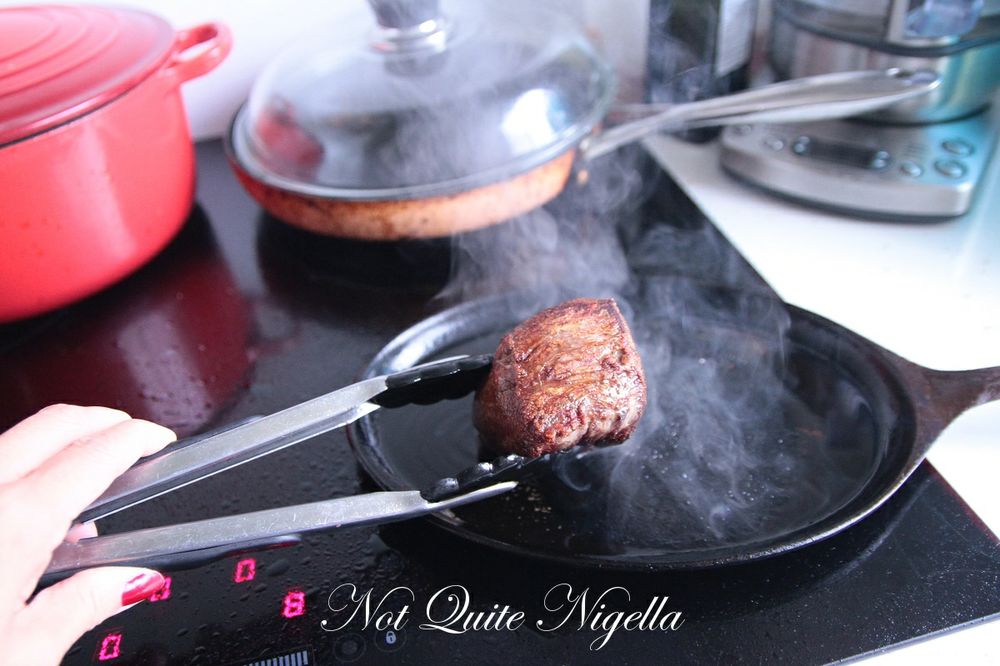 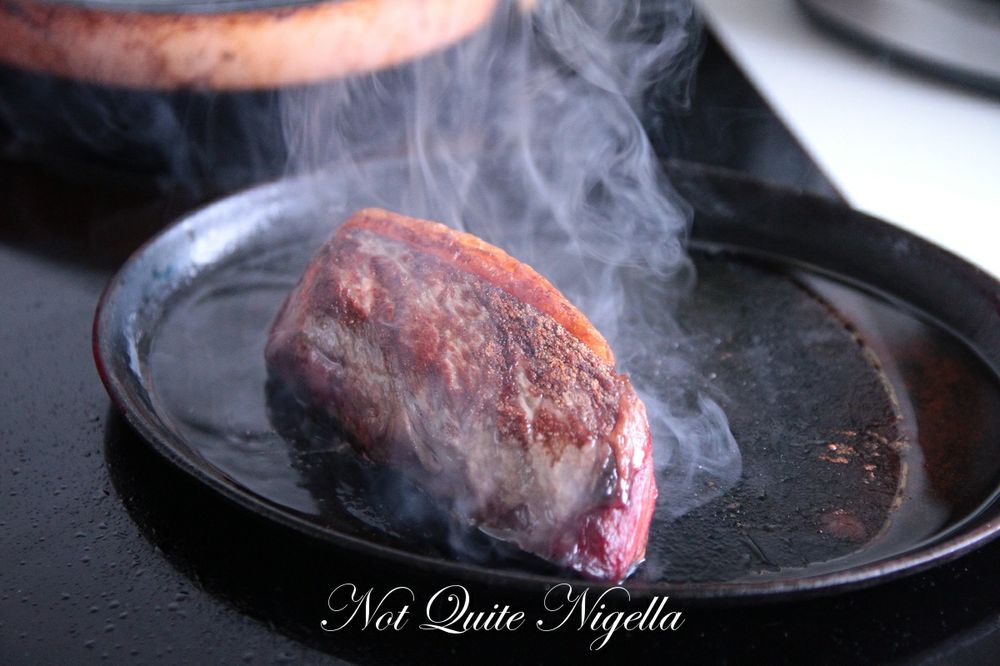 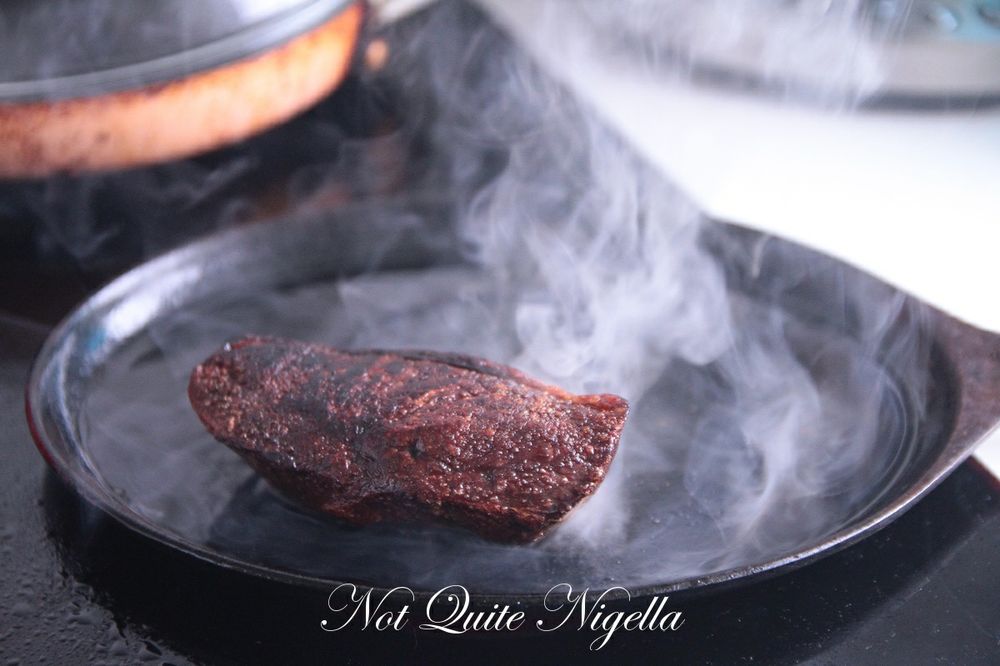 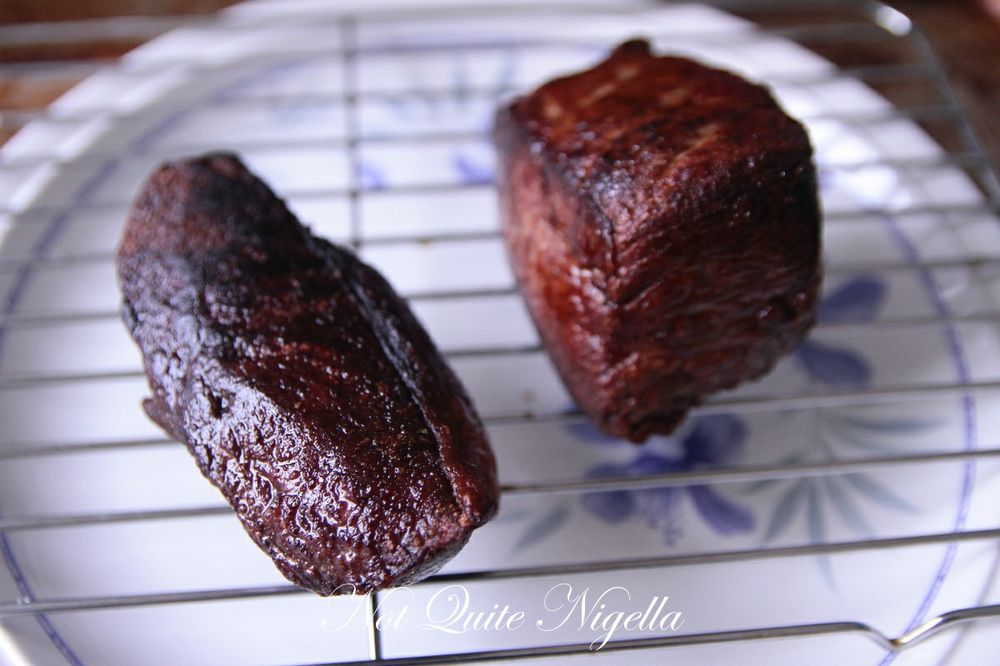 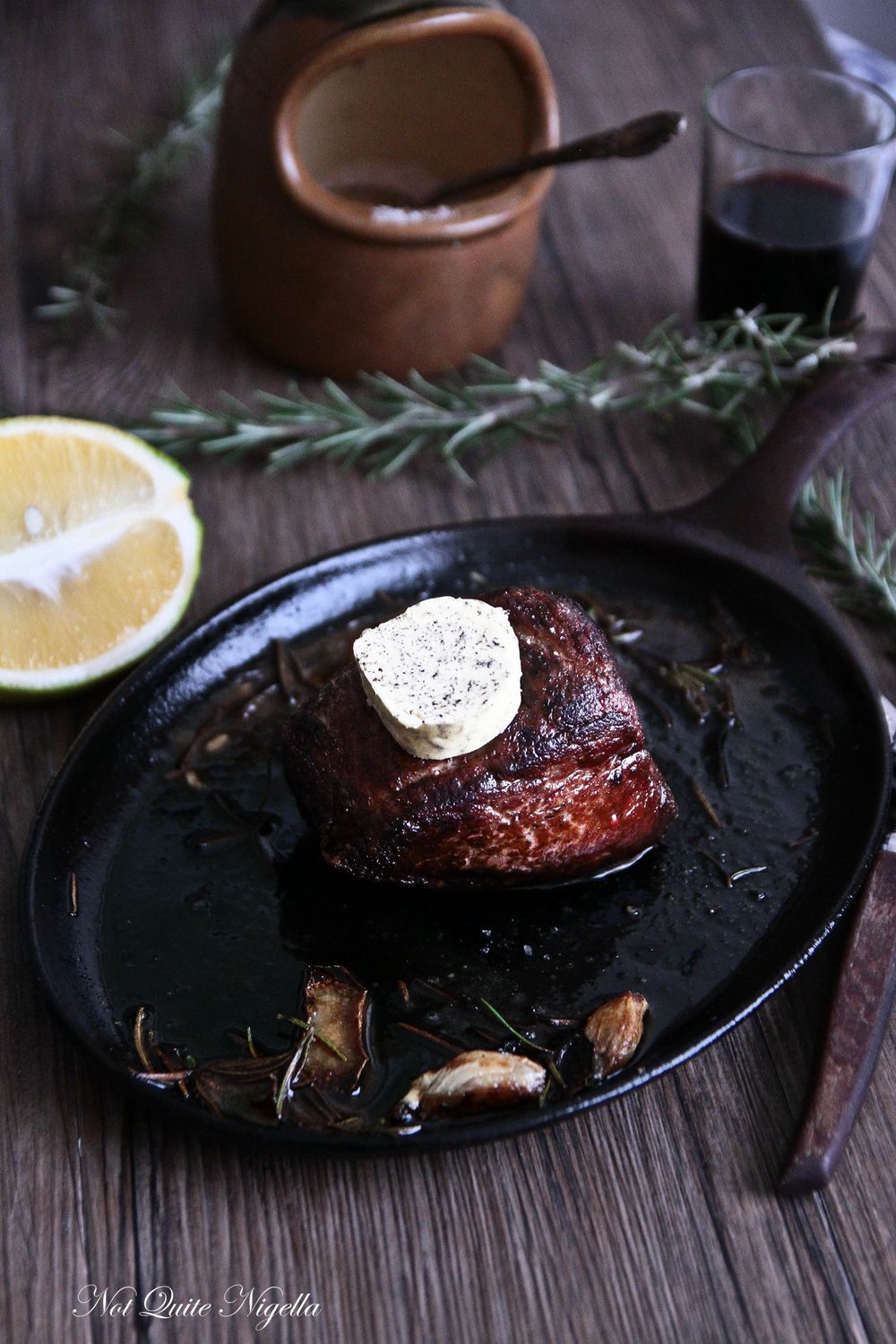