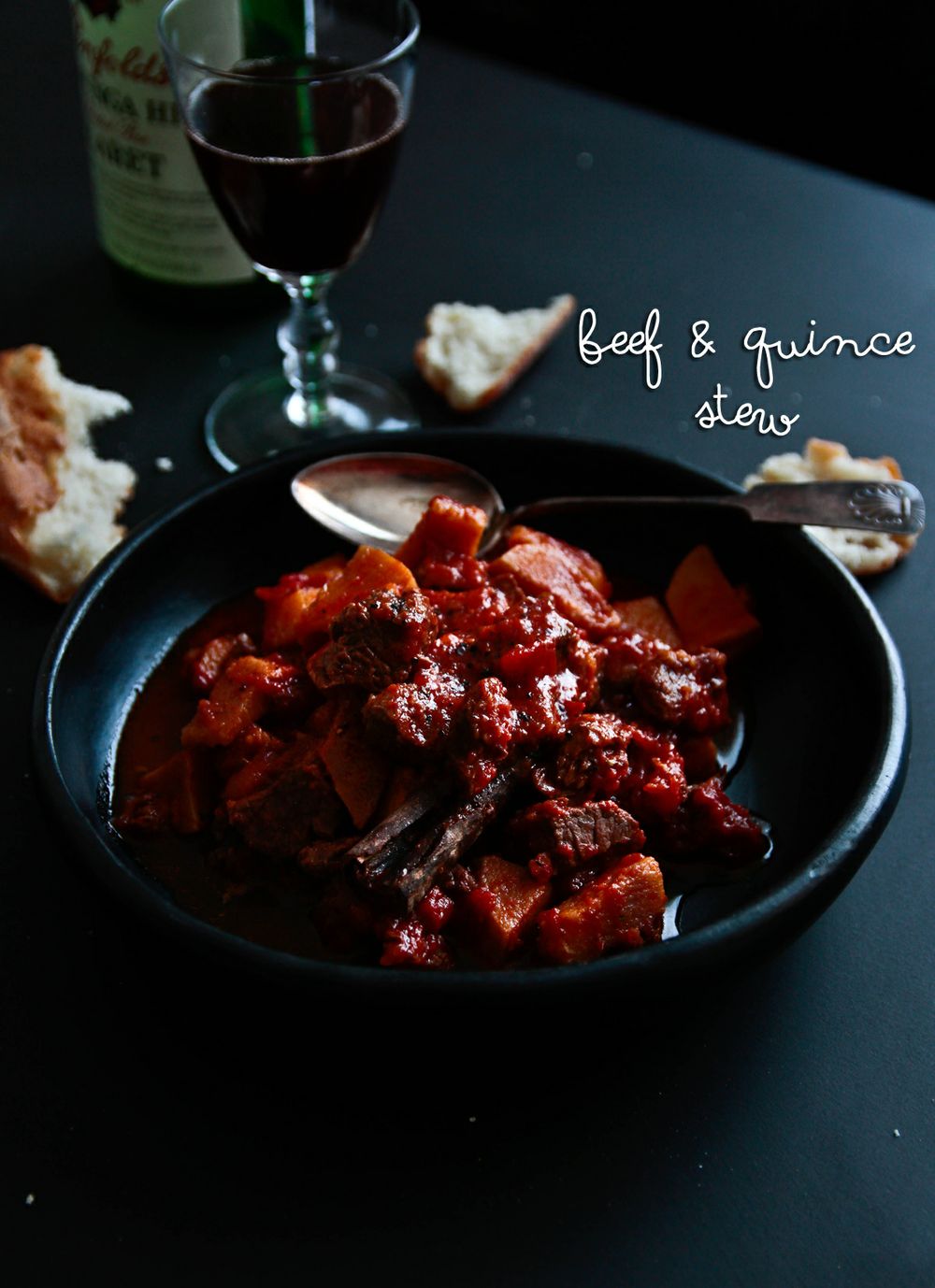 A few readers have asked me how the exercise sessions are going with my personal trainer. For the most part they're actually quite fun (I promise that I haven't been drinking) and for the first time during winter I haven't gained any weight which is somewhat of a major miracle. It's not for lack of trying. Every night I sit down to a cup of hot chocolate and a warming meal. But my thrice weekly workouts with my trainer Nina are hard and I often complain the whole time about wanting to go to sleep on the mat that she brings but she won't have a bar of it. "Push!!" she says to me sweetly but firmly.

I am trying to lure her to the dark side though. She told me that she wasn't much of a cook so I've been sending her recipes to make and so far, she's made a success of most of them including her biggest triumph, a flourless chocolate cake. Sometimes she forgets to adjust quantities to suit the amount of items that she has and sometimes I do have to explain some ingredients to her. One day she asked me what I was cooking and I told her that it was a beef and quince stew.

"Oh is that like a bird?" she asked unsure about the quince. I had to giggle, I think she mistook it for quail which was very cute. A quince is a fruit that you see around the Autumn Winter season and I saw some for $2.49 a kilo so I grabbed them eagerly. They're a great fruit but they can only be eaten when cooked and the skin contains a lot of pectin which is why it is great for jellies and pastes. 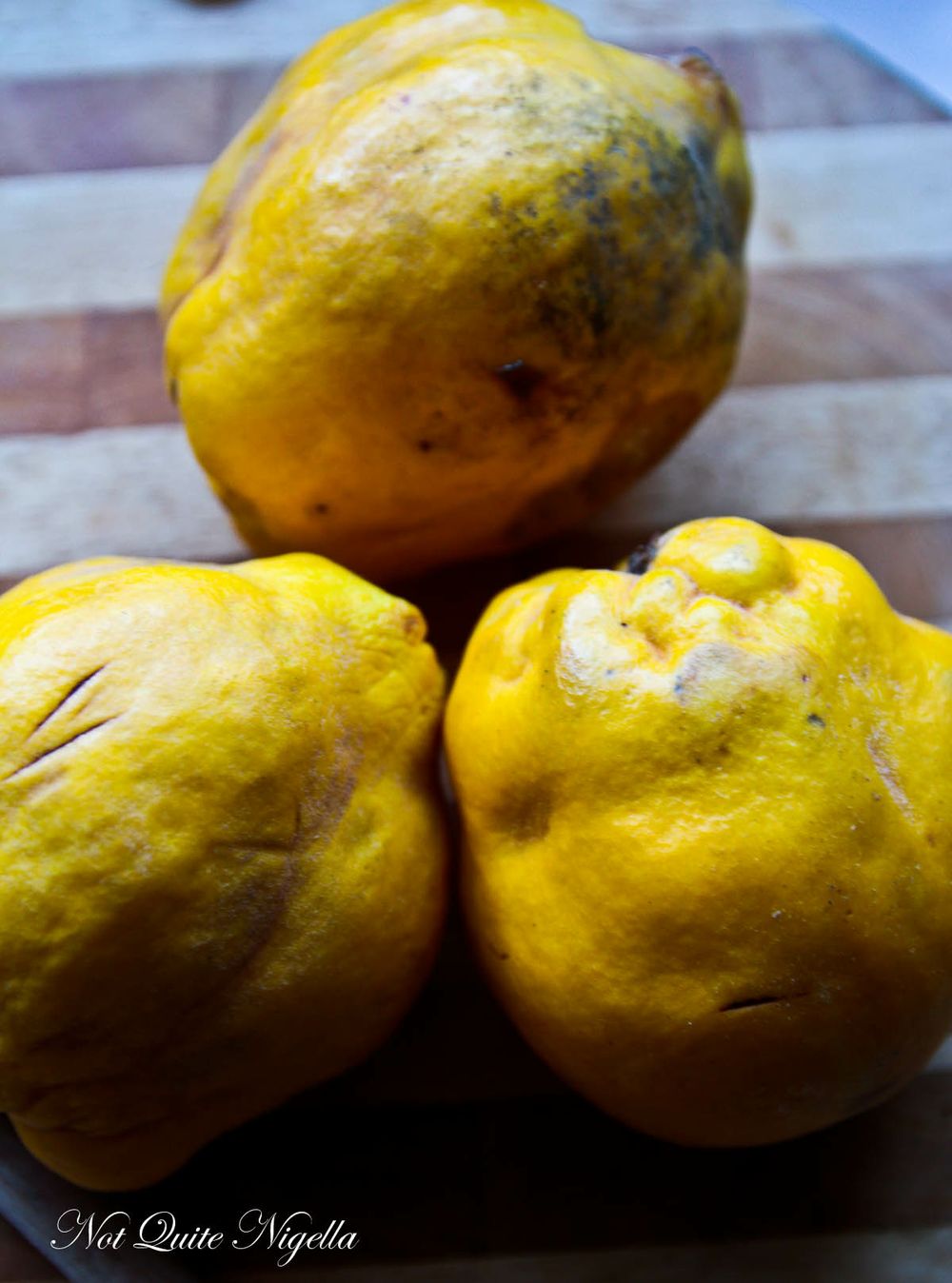 Quince are harvested here in Australia from April to May but can keep in the fridge for up to three months. Quinces are often made into a jelly, paste or sweet desserts but it was from Dimitri who I met in Queensland a few months ago that I got a savoury recipe idea for them. I had such success with his lazy housewife's moussaka that I decided to give the quinces a go in the other recipe he gave me, beef and quince with red sauce.

It was actually his description at the end that did it. He described the recipe as "You should have a meal where the meat is tender with a lovely thick red sauce with your potatoes or quince fruit." Doesn't that sound absolutely, insanely luscious? I read the recipe - it seemed simple, actually truth be told perhaps too simple so I only made half a batch of this lest it not work out. I shouldn't have worried. Yes it is easy but it is also wonderfully comforting and full of flavour. The sauce cooks down so that it is beautifully thick but not dry, the beef is so tender and the quinces take only a short time until they too blend into the rubied stew with the soft chunks of melting beef.

So tell me Dear Reader, are you glad that winter is almost over? 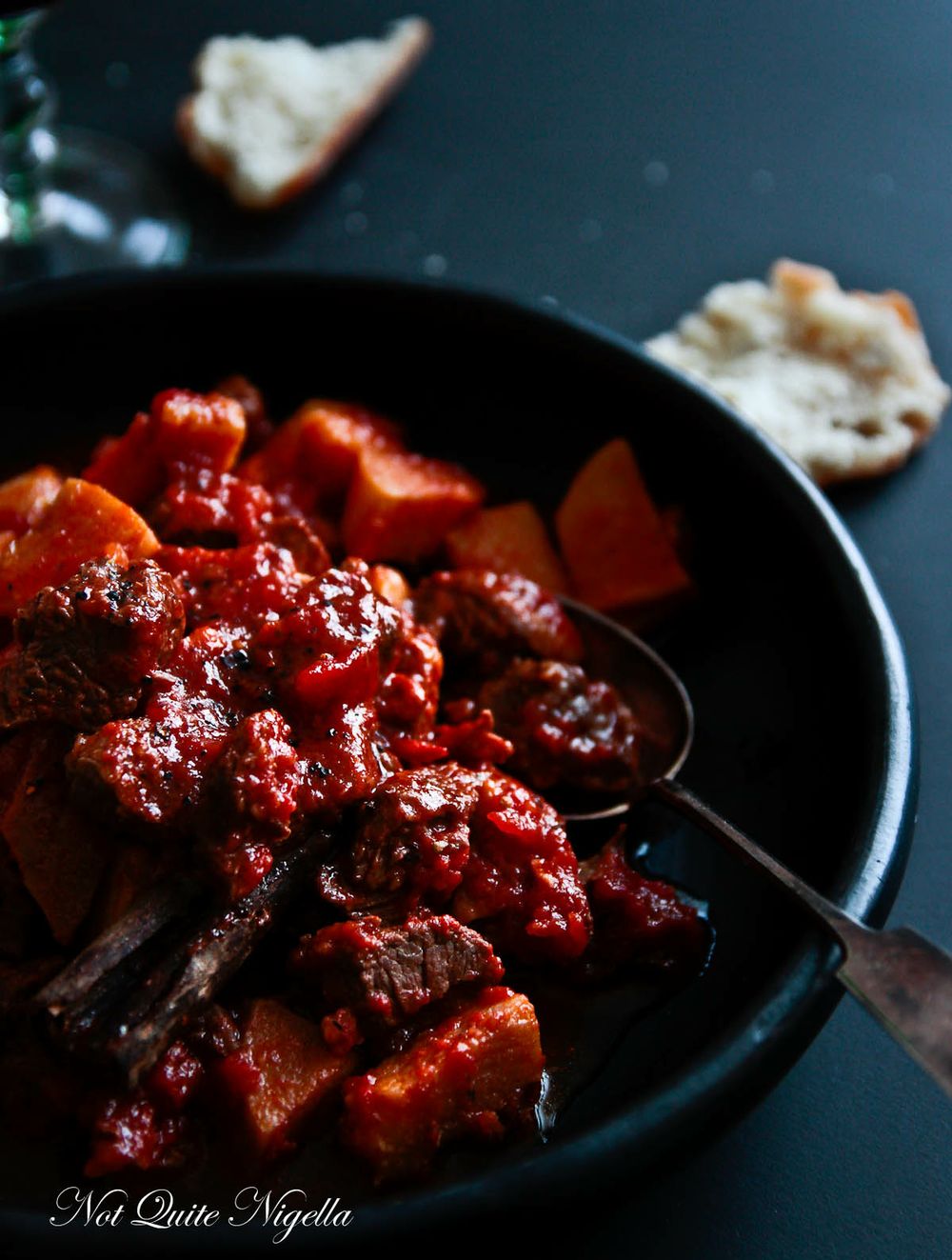 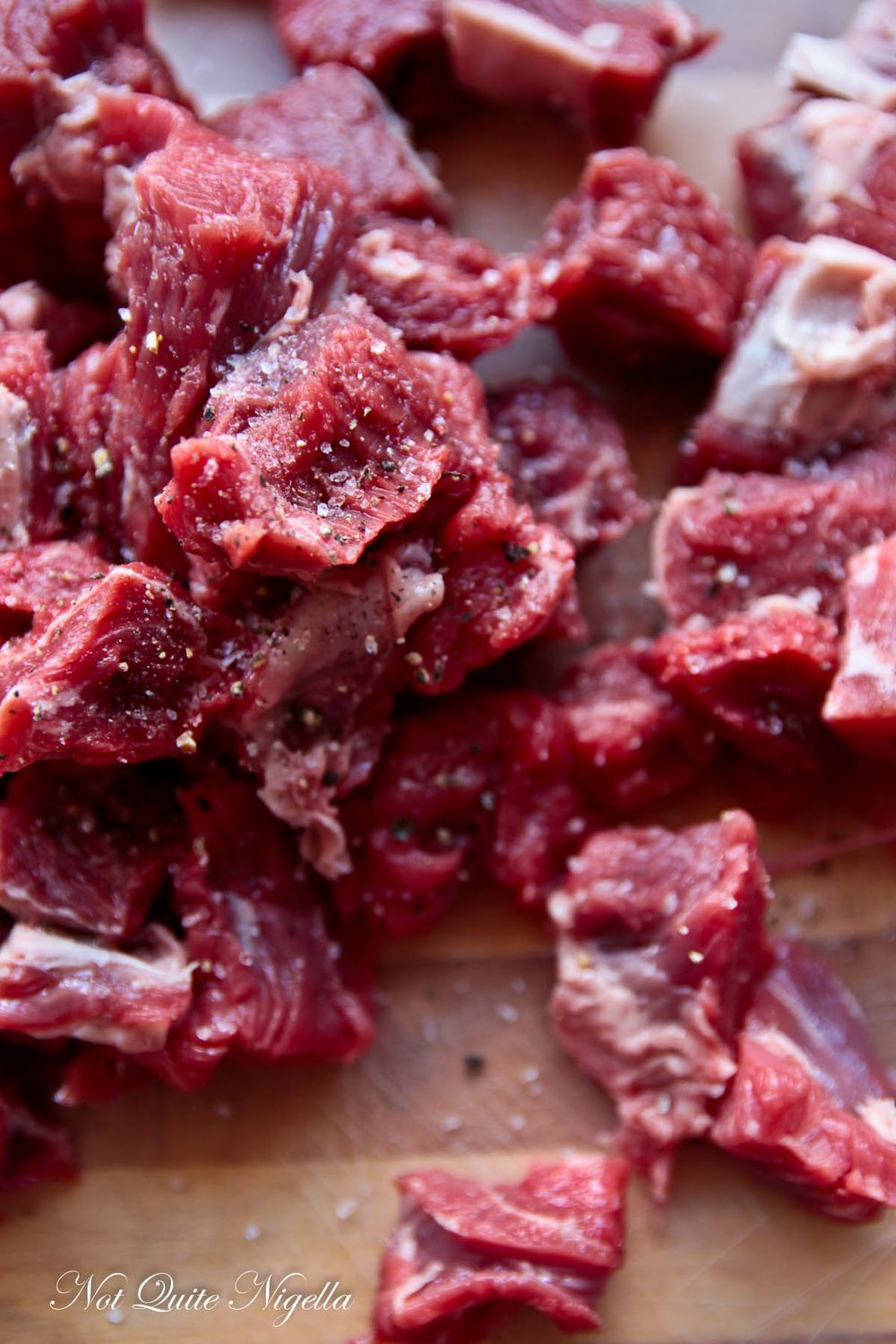 Step 1 - Cut the beef into small pieces and season with salt and pepper. Heat a large cast iron pot with the oil and brown the beef in two batches. Place all of the beef back in the pot and add the tomatoes, cinnamon sticks, cloves and vegetable stock and place the lid on and simmer for one and a half to two hours, stirring occasionally (okay that's a lie, I left it simmering and didn't stir it and it was fine). 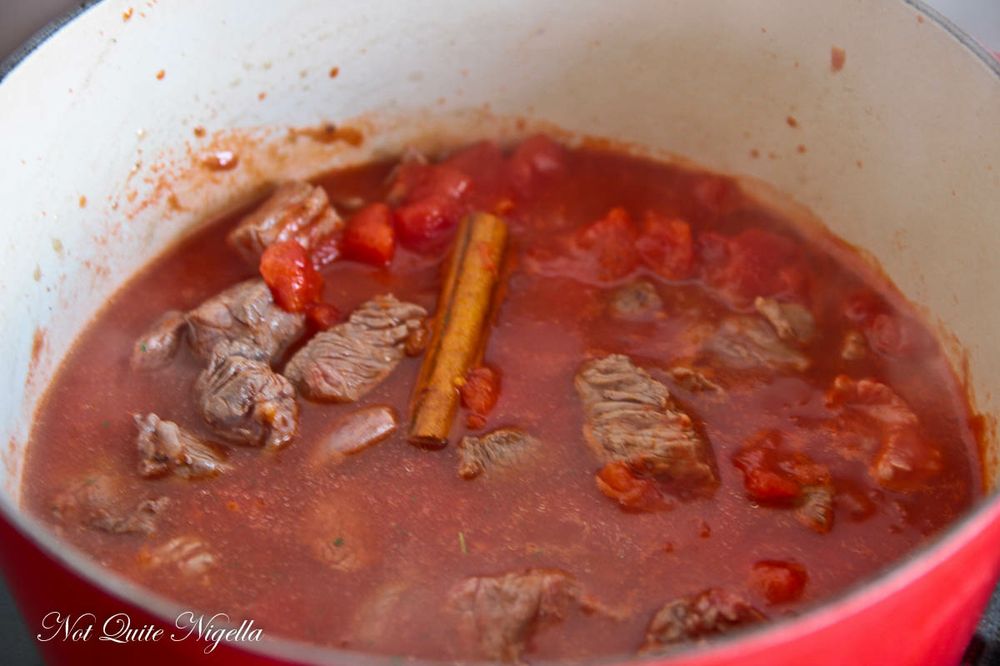 Step 2 - Peel and core the quinces and cut them into a similar size to the beef. Place in the pot and simmer for 20 minutes or until the quince is tender but not mushy.

Note: this can also be done with lamb instead of beef and you can also use potatoes or sweet potatoes (just add a teaspoon of sugar if you're using potatoes). 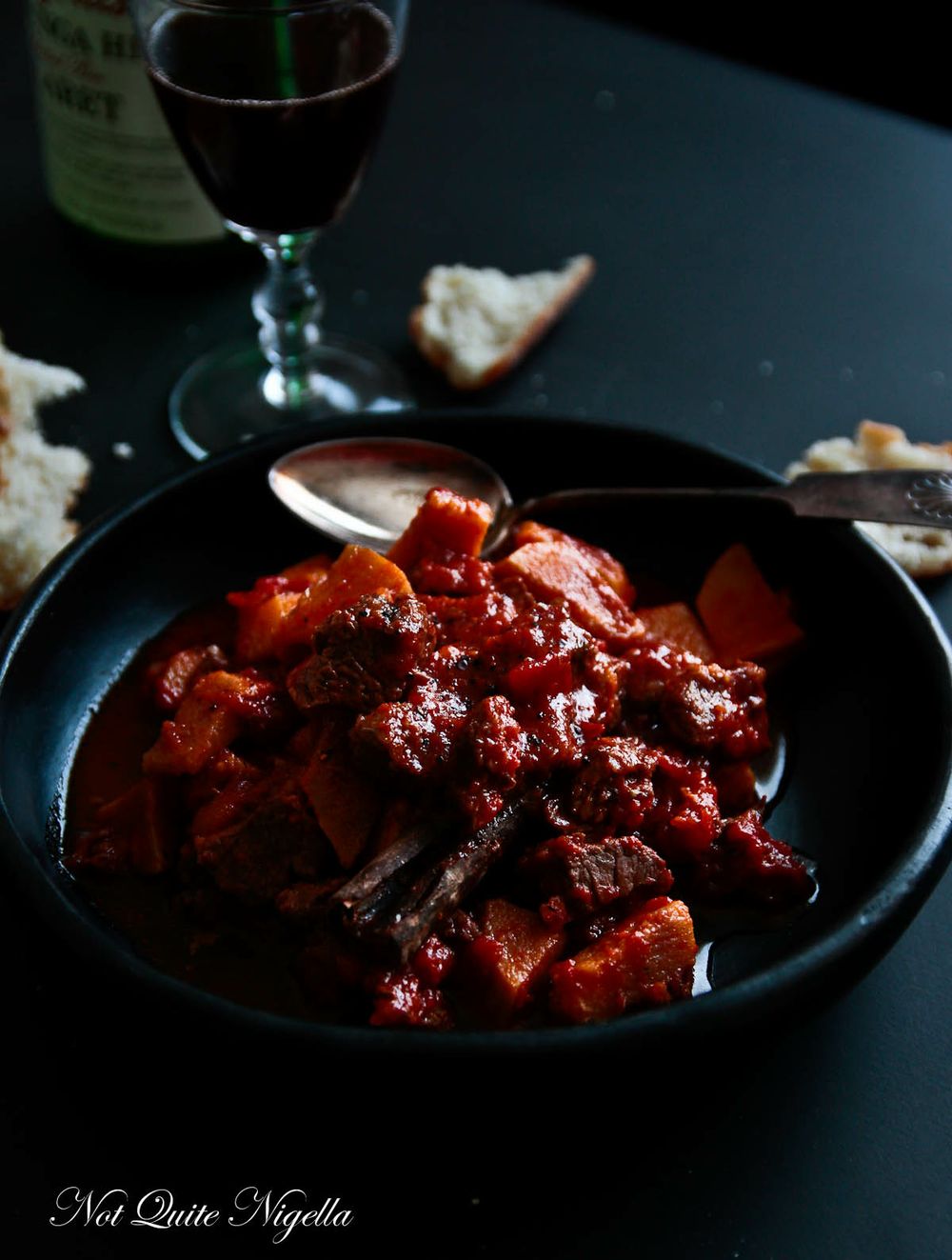