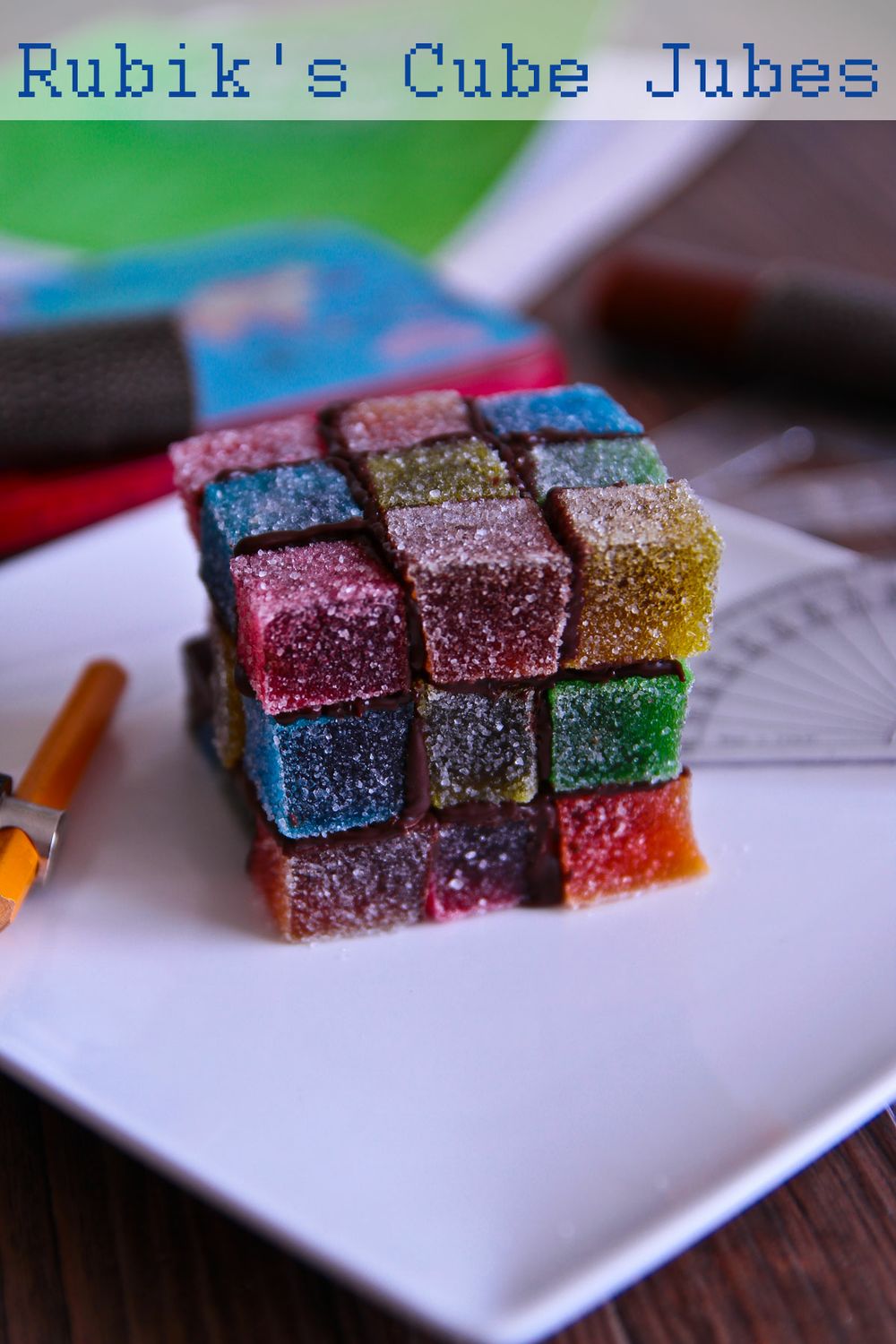 "Tell me about the time you worked in movies" the little girl said to me.

"Movies? Me?" I answered. Well I had worked on one movie, technically, two The Matrix 2 ad 3 of which I've told you about the audition process. But I wouldn't say that I worked on a lot of them. However, I do have some interesting tidbits to share with you about my time on The Matrix 2. 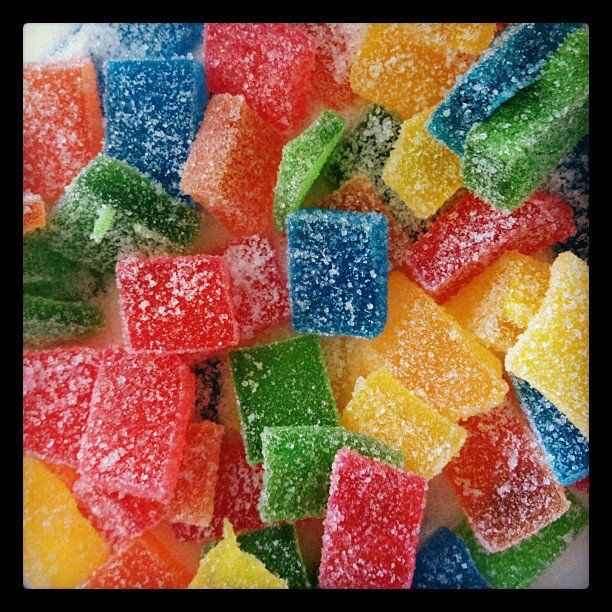 The first thing, and this may sound silly but I was just an extra this was thrilling to me, was that they took an hour to do my hair every single day. I wasn't anyone important in the scheme of things, nor would anyone care about my hair. But someone had decreed that I was to have my hair in an elaborate bun. From my vantage point, which was facing the mirror, I could see plenty of pins going into the back of my bed. I had to admit, they did a wonderful job and having this done to my hair meant that I could sometimes go into the hair and makeup section in the studio building with the big names, rather than the trailer outside. 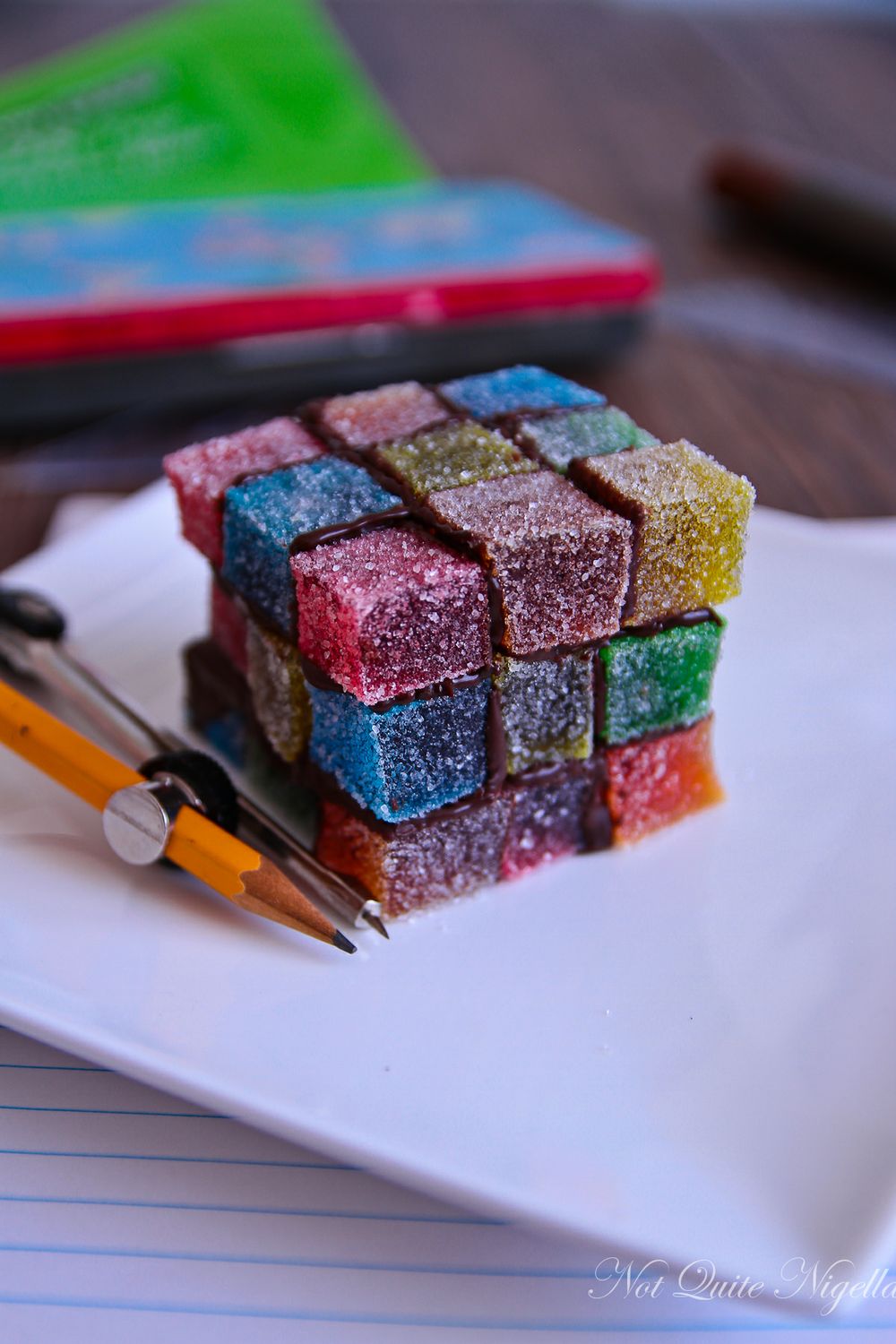 The first time I walked in and to my left were Carrie-Anne Moss and Jade Pinkett Smith. Carrie-Anne greeted me with a friendly smile and a bright "hello!" while Jada simply looked me up and down and deciding that I wasn't interesting or important, looked away. It didn't bother me, Ms Smith already had quite a reputation around the set (sorry to any fans out there but it's true!) and it was that ceiling to floor look every time any time anyone walked past her. The makeup, well that was disappointingly minimalist, just a bit of foundation, no mascara, eyeliner or lipstick. I thought I looked kind of dead. Every day girls and guys would sneak some makeup on to make themselves look more presentable.

Every day was the same, and I mean really the same because we spent one week filming the same scene from different angles. Lunch was fine although costumes were so tight that you couldn't eat much, and snacks were essential to keep energy stores up. We were given plenty of Pringles to eat along with jubes and lollies and fresh fruit. Nowadays, I can't look at a tube of Pringles but jubes, well I didn't eat enough of them to get sick of them. 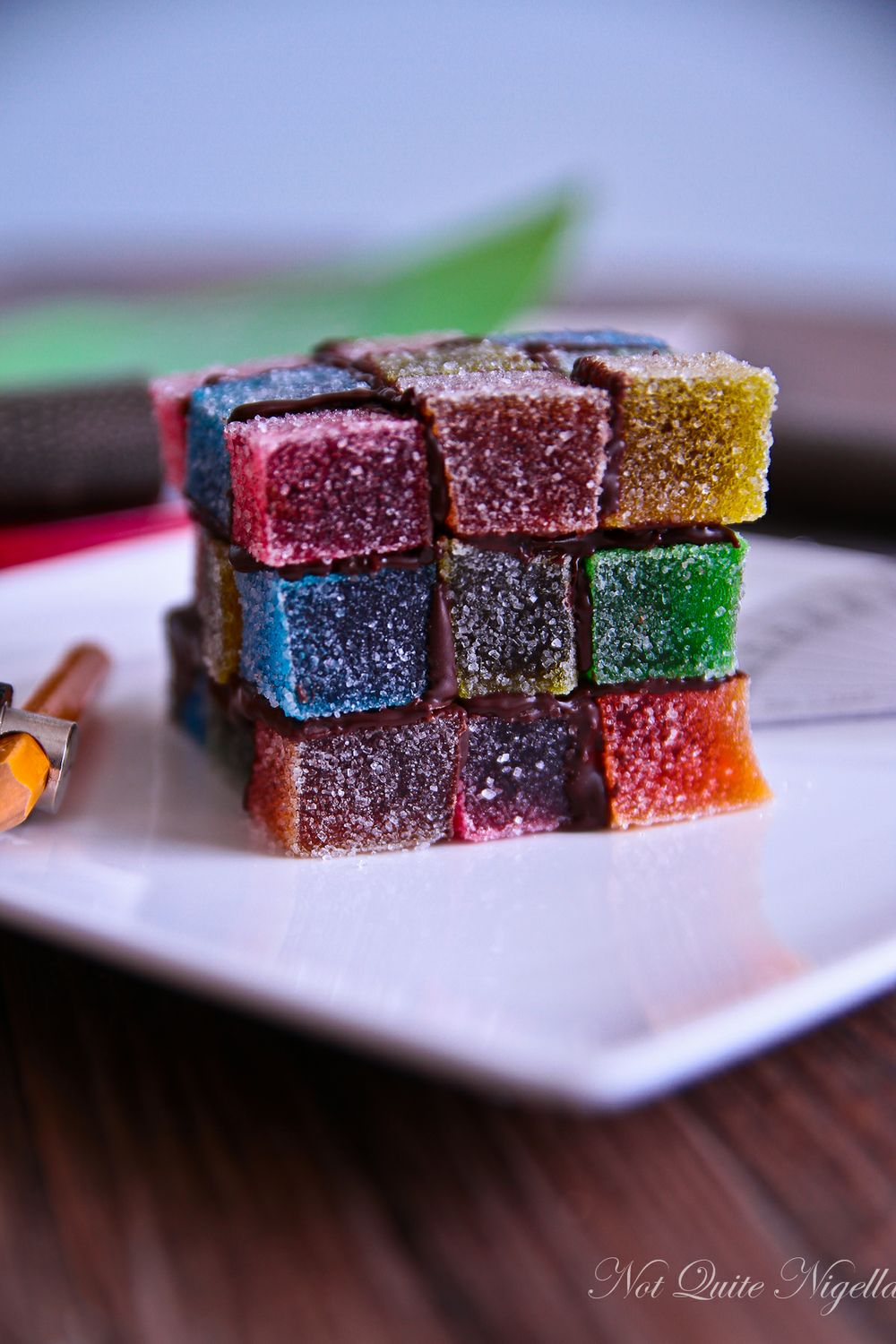 In fact, I was contemplating jubes the other day as they were given to me as a snack while travelling. Could you make them yourself I wondered? I had made jelly beans so surely jubes could be made. I could also stack them on top of each other like a Rubik's cube, that fabulous toy from the1980s. And if there's something I love, it's a bit of retro with my sweet selection (especially since I hadn't gorged myself on them while filming like I had Pringles). The jubes required quite a bit of testing - the key was the amount of gelatine leaves that was needed. Once this was figured out, it was a cinch (and required no special equipment, just the merest illusion of sanity! ;)

Back to the movies.... do you want to know the nicest star encounter? On the last day of filming, my time working on the movies was coming to an end and I had a proper job interview. The pins in my hair were sticking into my scalp so loosened some once 'it's a wrap' was called. It looked messy so the hair ladies washed my hair in the sink and I blow dried it and tried to make myself look less corpse like by putting on my make up. I came out wearing a skirt, top and heels and felt like myself again. At that moment, Lawrence Fishburne turned up on a motorcycle looking ridiculously cool and a smile spread across his face "Hey! You look different!" he said to me. I was shocked that I had even registered to him as an entity. "You look like Miss America, girl!" he said before roaring off on his bike.

So tell me Dear Reader, which celebrities would you like to share the screen with? And if you could have worked on one movie, what would it have been? And did you ever have a Rubik's Cube? I had one, couldn't solve it and ended up changing the stickers :P 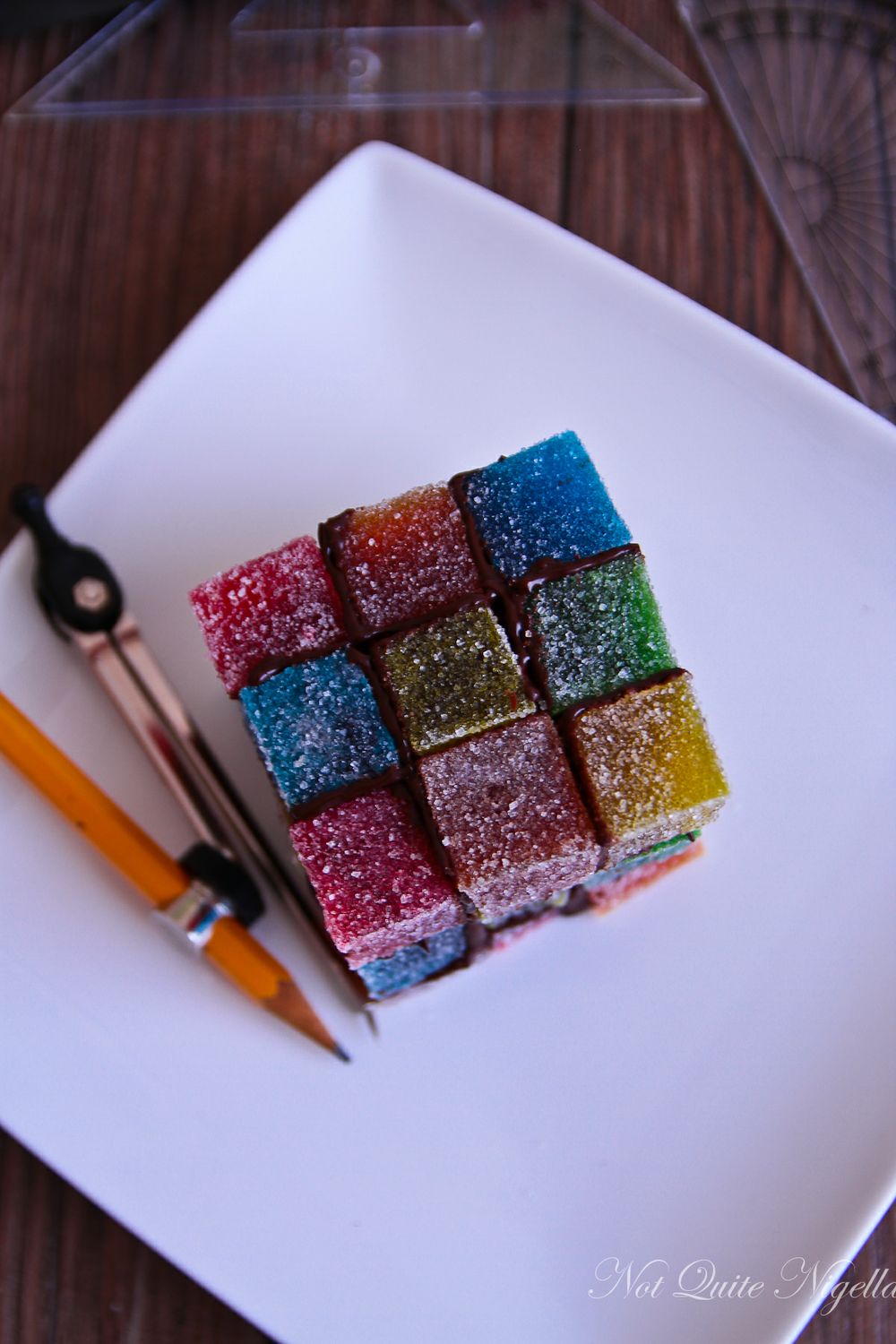 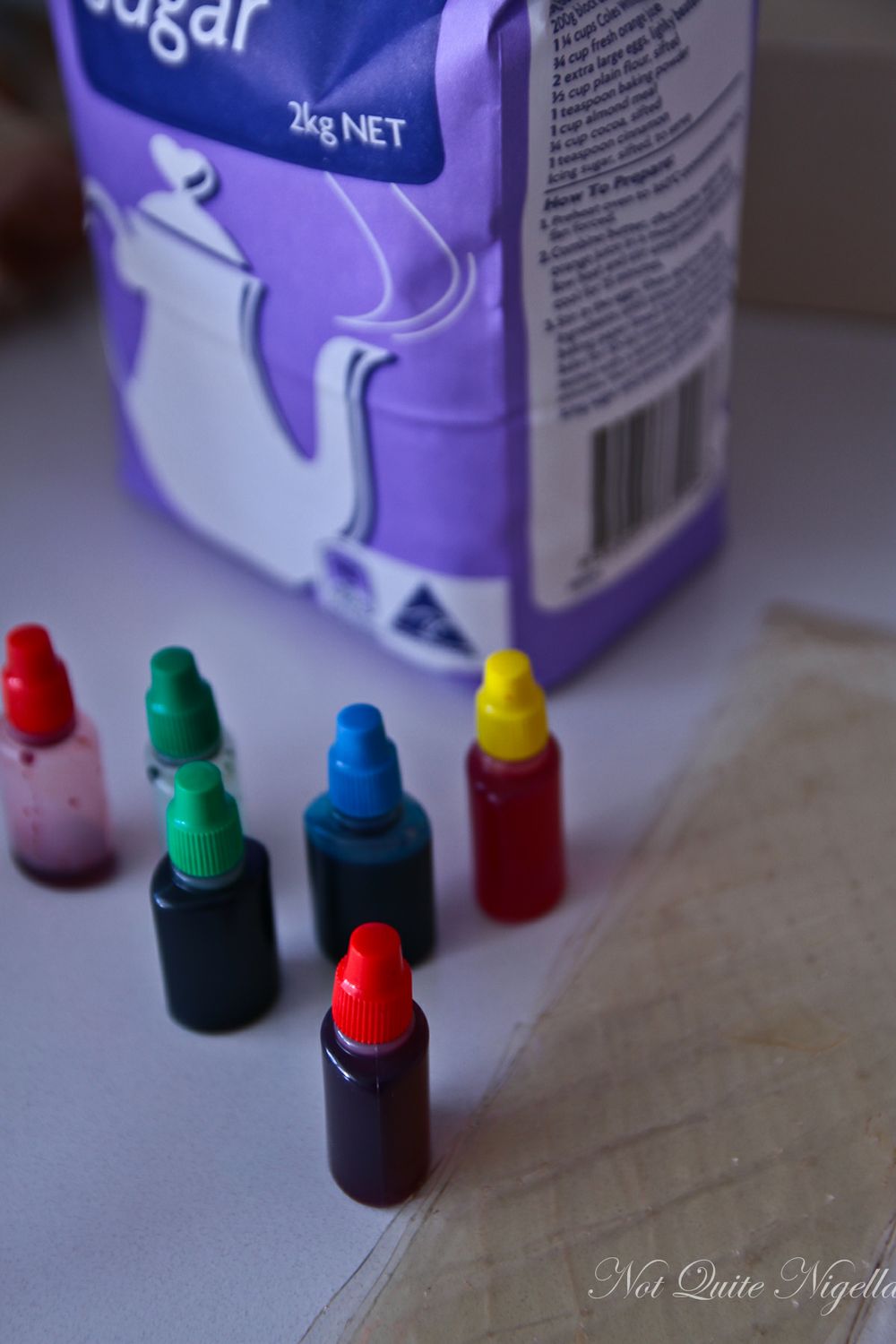 Step 1 - Place water and sugar in a heavy based saucepan and dissolve the sugar. Then simmer this for about 25-30 minutes stirring regularly. 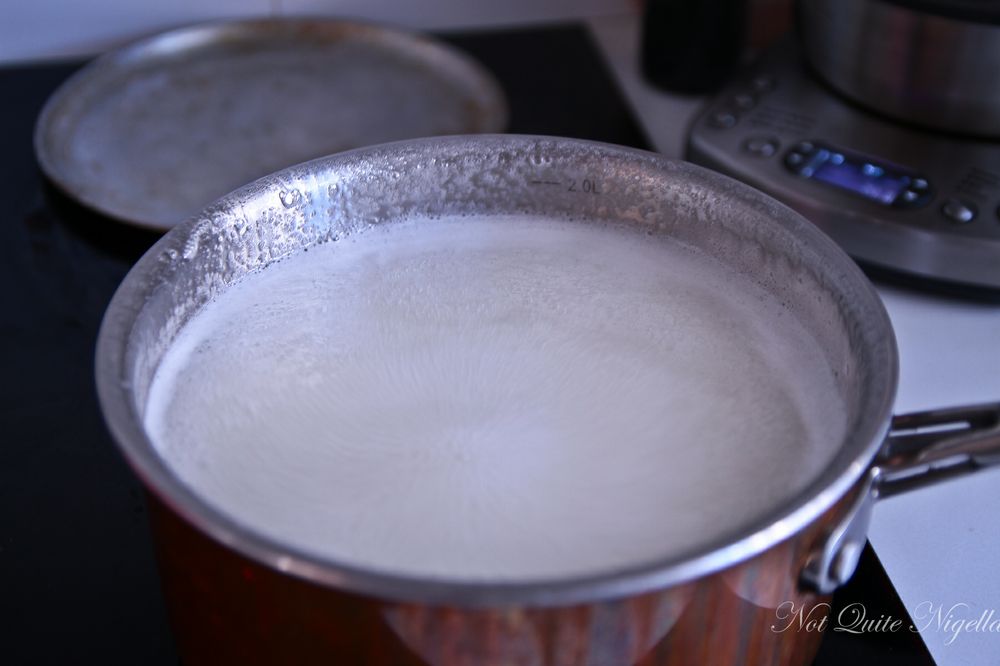 Step 2 - Meanwhile, about 5 minutes before it is ready, soften the gelatine leaves in a bowl of cold water. Prepare the containers by spraying them with the oil spray-be generous, the last thing you want is for them to stick. 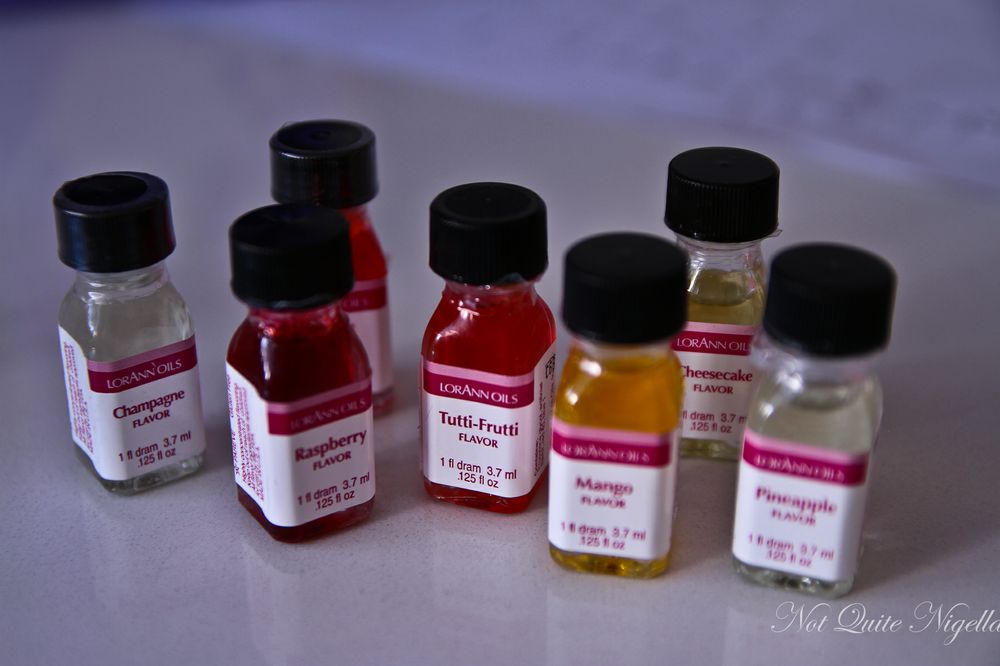 Step 3 - When the gelatine leaves have softened, squeeze them gently of water but be sure to get the water out and then add the leaves to the hot sugar syrup. Stir until combined well. Then using a ladle, divide the sugar syrup between the five containers making sure the height and quantity of each is the same if you are making a Rubik's Cube. To each container, add colouring and flavourings and stir well. Allow to cool and then place in fridge overnight. 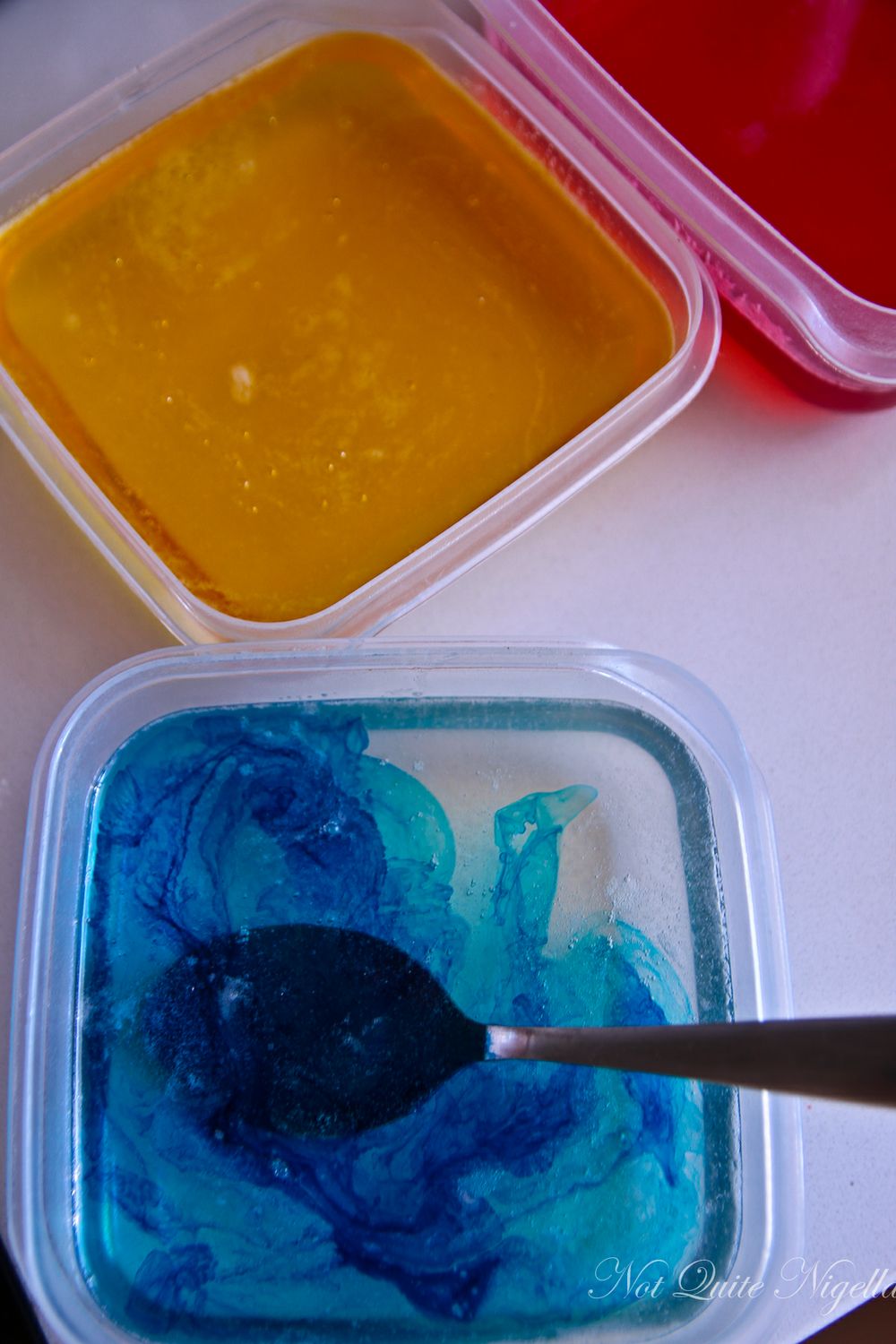 Step 4 - The next day, take a large plate with rim and coat with half of the remaining sugar. Using the tip of a sharp knife, cut around the edge to separate the jube from the container and gently remove it from the container-it is quite firm at this point and not like jelly. Using a sharp knife, cut into cubes and roll in the sugar. As you can see, my containers were rounded and weren't ideal so I had to trim them to get cubes. At this point, you can just serve them like this and they will keep in an airtight container for 2 weeks. 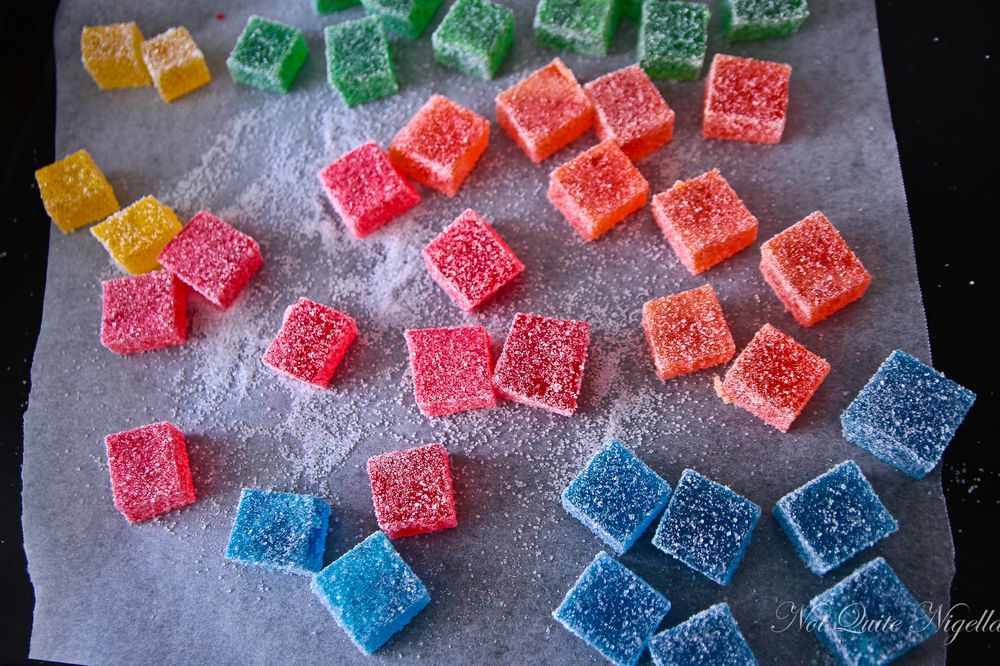 Step 5 - If you want to make a Rubik's cube, make sure the cubes are cut to the same size or thereabouts (you can see I was a bit Swedish chef in the way I did mine). It's really best if you line up your colours first. You will have three layers of 9 cubes in each layer so lay them out so that the colour alternate. 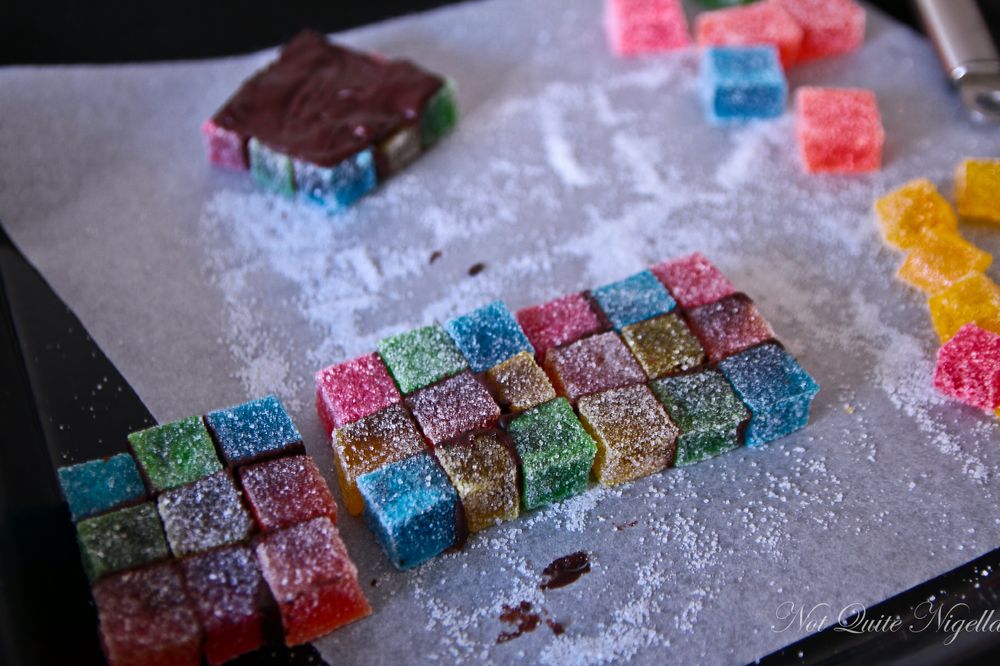 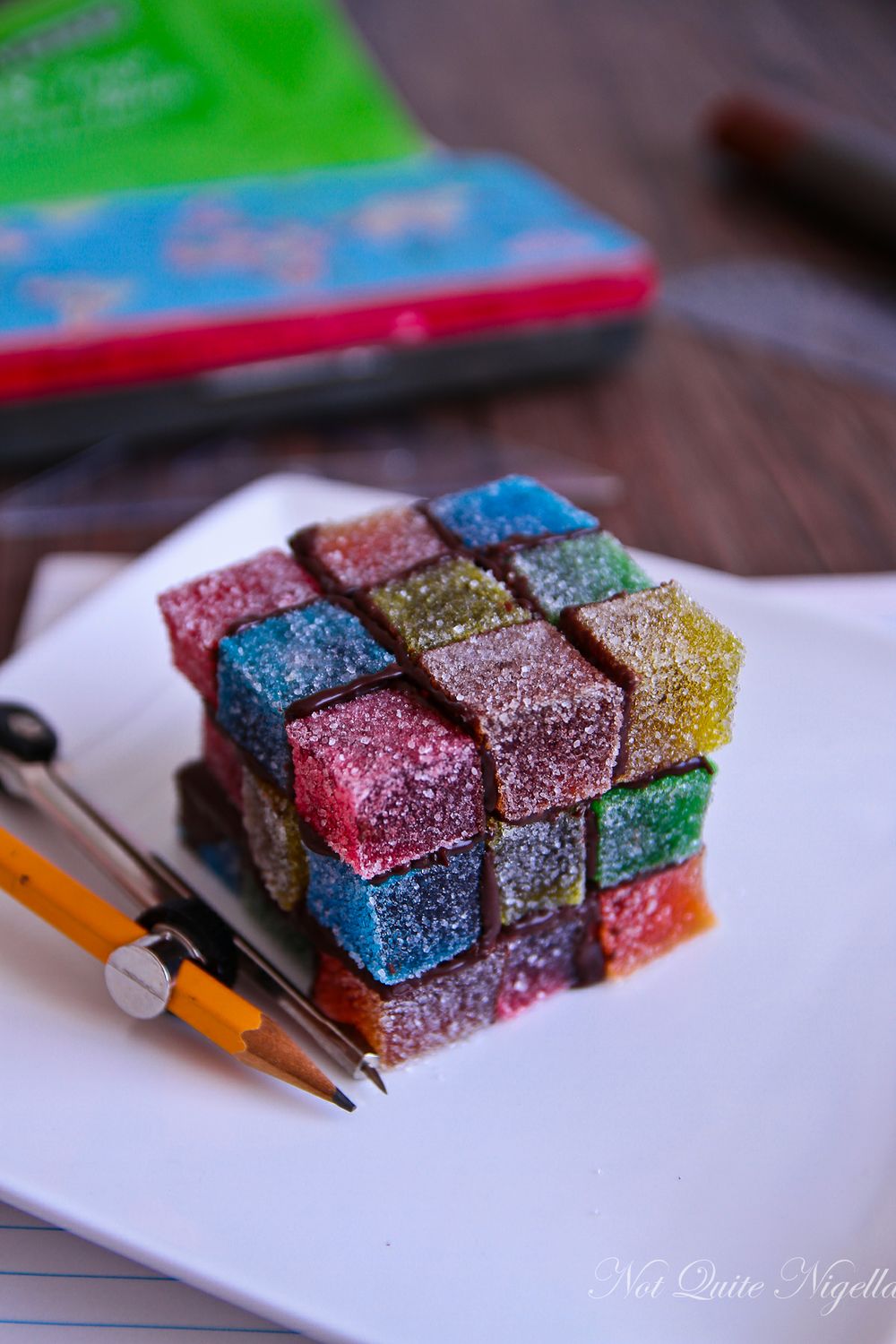