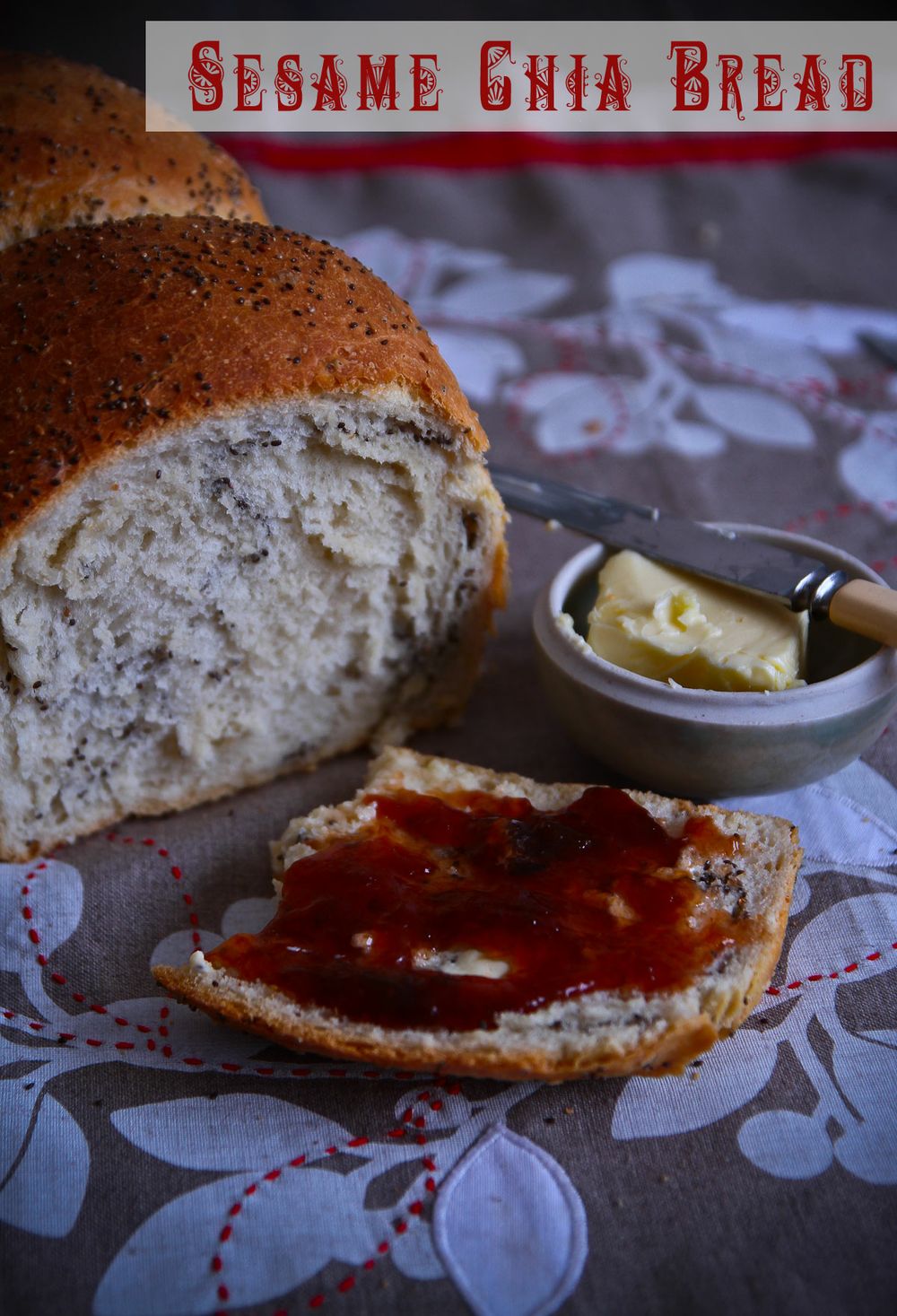 Dear Reader, do you ever wonder about the etymology of words? That is, where words first originated and how they have changed over the years. Do you ever make up words entirely? I was recently on a whirlwind of a trip and sitting on a train which was rapidly crossing borders. Around me, things were whizzing past, people were walking up and down the aisles and the constant stimulation played havoc with my jetlag. I said to my travelling companions "I feel like I'm aslake" which to me sort of meant asleep awake. And there was no better word to describe what we were all feeling.

Another time I was watching youtube and came across Here Comes Honey Boo Boo Child. Now, I'm occasionally up for train wreck television but I was alarmed when I saw what could have been an adorable child being quite "undorable."

When I first heard of chia seeds, I thought that had something to do with the chia pets. It turns out the word for these very healthy seeds come from the Mexican language Nahuatl where the word chian means oily. I have started eating them as they're said to be good for you but I find that these combined with the warm weather means that I get less hungry during the day and less prone to snacking or becoming deliriously hungry and succumbing to a piece of cake.

I decided to make them into a bread so that I could have a slice mid morning and then be done with sugary temptations. The bread recipe comes from two friends, originally from Brydie from Cityhippyfarmgirl and then Johanna from GreenGourmetGiraffe who adapted Brydie's recipe from the Bourke Street Bakery cookbook. It's an easy to make recipe that made two neat loaves-I liked Johanna's tip on shaping two rounds to make an old fashioned looking loaf. Don't worry if at first you think the crust is too thick or hard, it softens soon after it comes out of the oven and becomes juuust right.

So tell me Dear Reader, have you seen Here Comes Honey Boo Boo Child? And have you ever had the feeling of being aslake? ;) 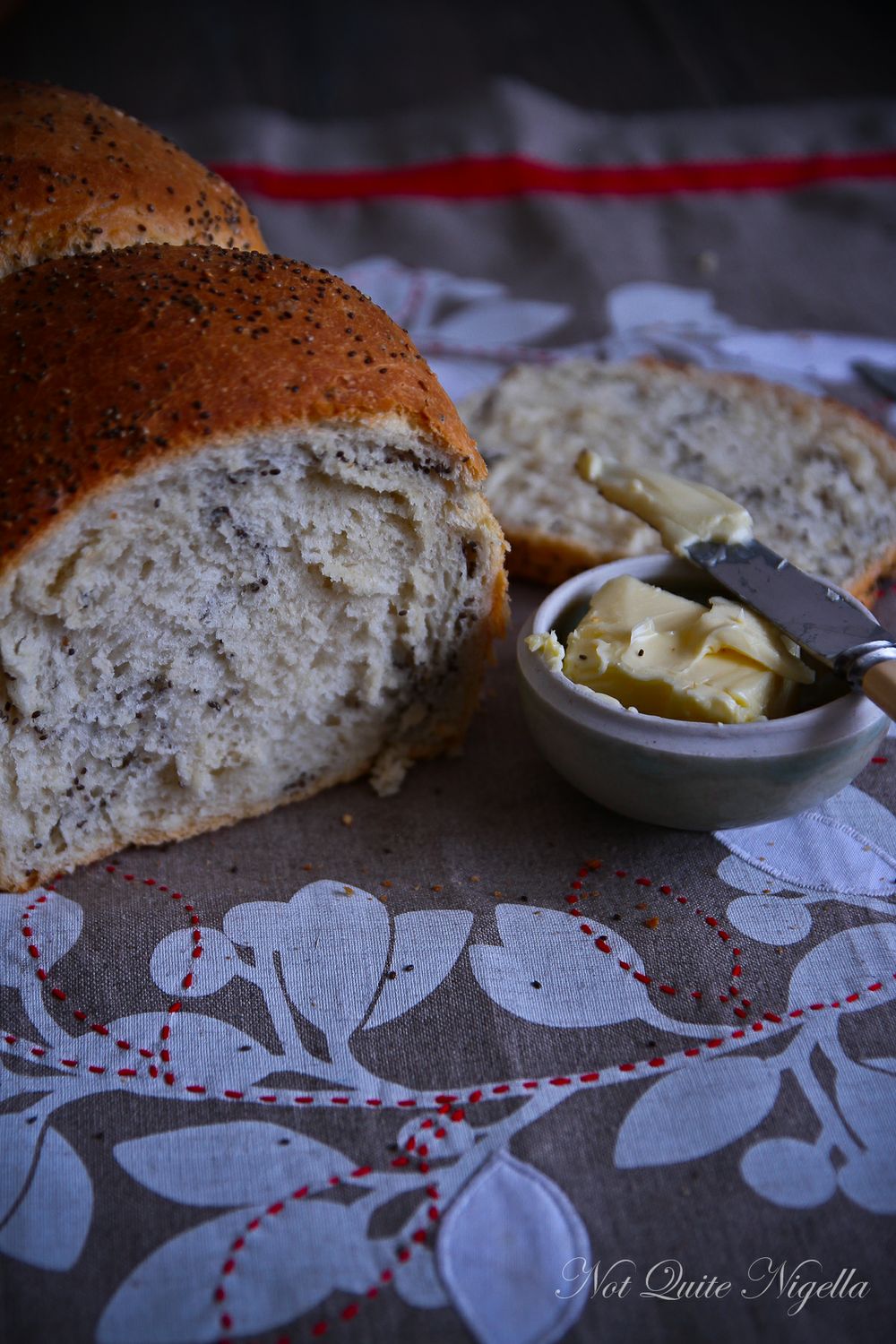 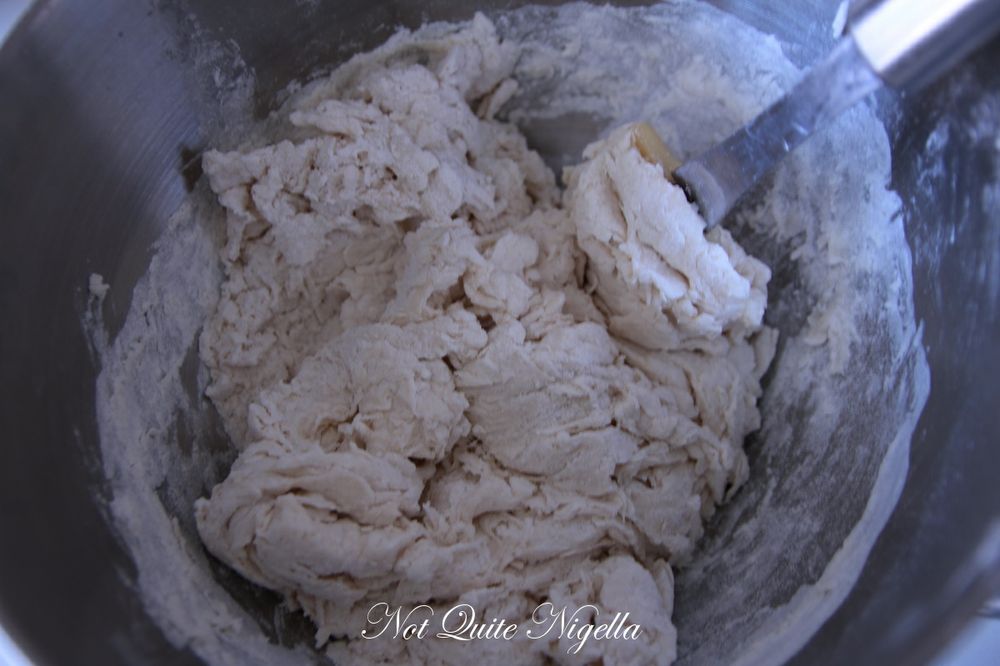 Step 1 - Place yeast, warm water and flour in a mixing bowl and mix together and let sit for 10 minutes. It will look like a shaggy mess but that's ok. Add oils and salt and stir to combine. Knead for 4-5 minutes if using a dough hook or 8-10 minutes by hand. Form a ball making sure to get all the bits of dough from the side and place in the same bowl and cover with cling wrap. Allow to rise for 30 minutes until doubled in size - if the weather is cold and it is having difficulties rising, place in a bowl of hot water changing the water once or twice during this time. 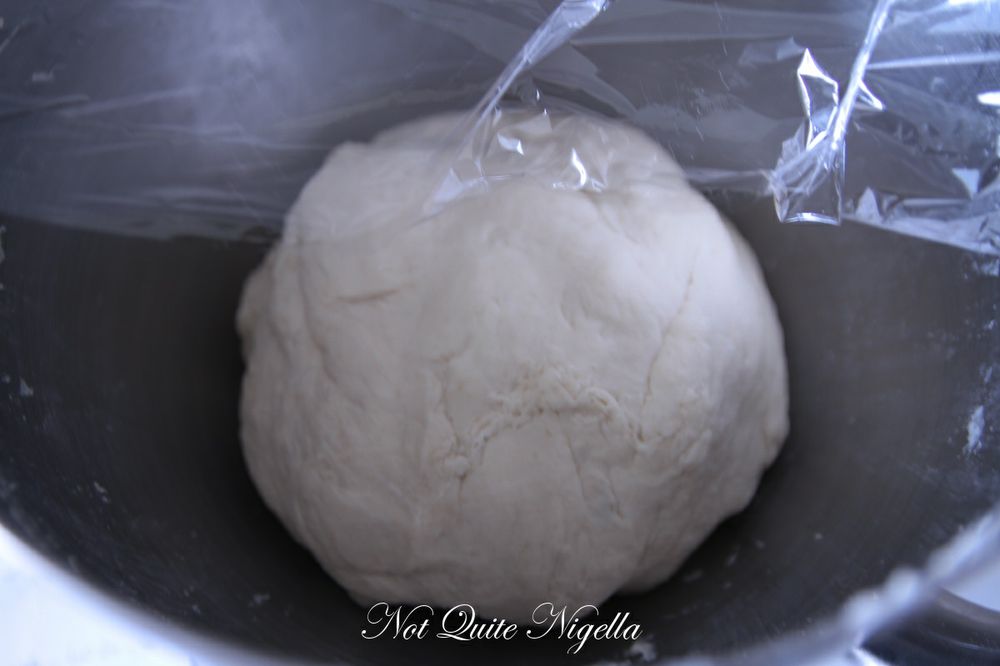 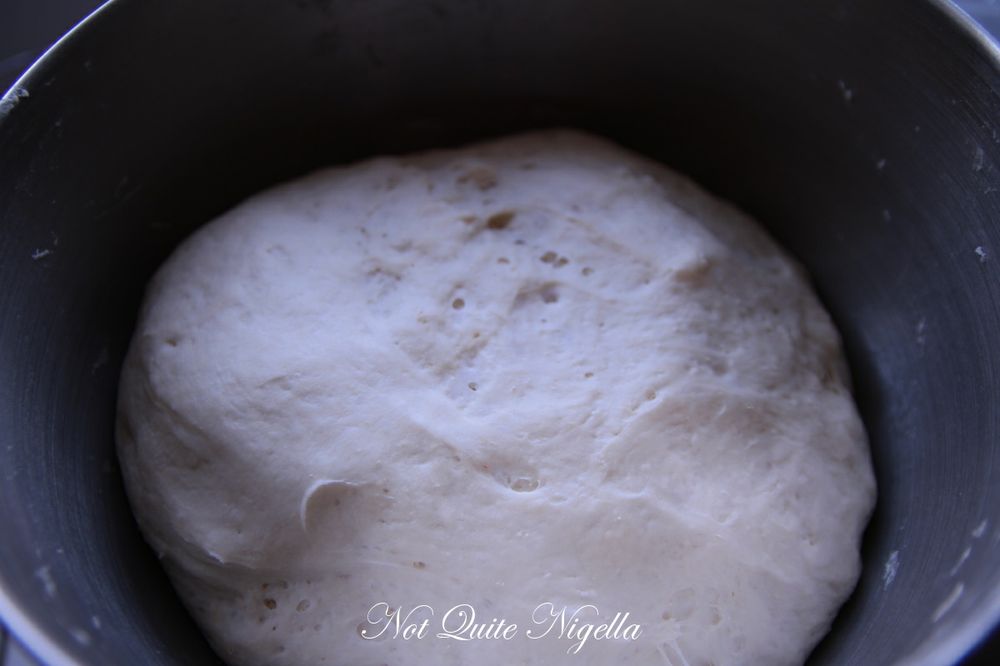 After the first rise

Step 2 - Punch down the dough and knead it lightly again for about a minute. Allow to rise again for 30 minutes. Then, punch down and knead, this time incorporating the sesame and chia seeds. 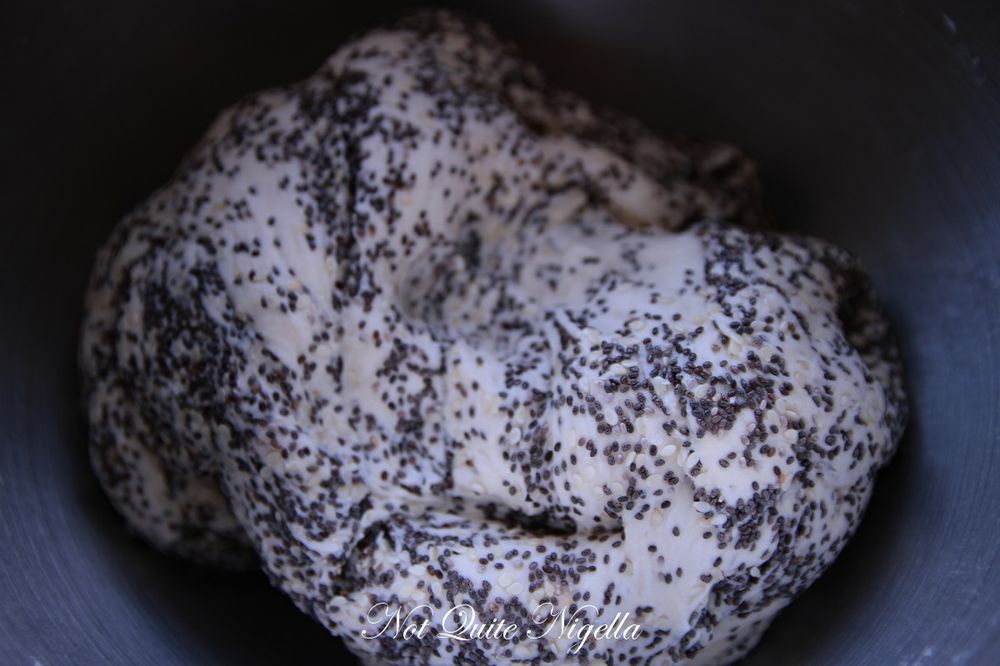 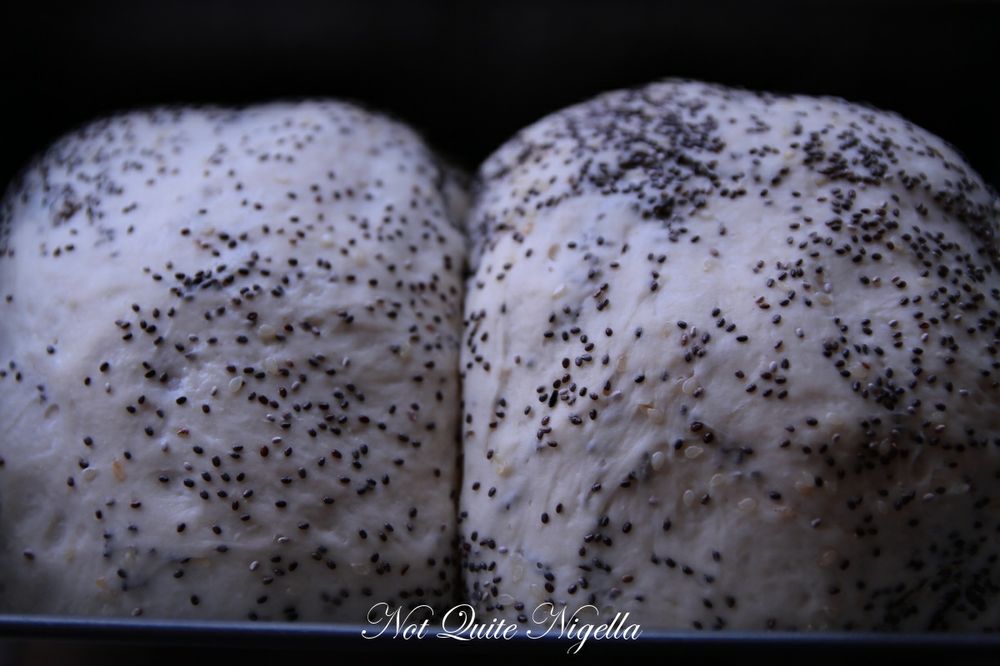 Step 3 - Oil a rectangular bread tin and split the bread into two halves making two large balls and place them side by side. Allow to rise to about two thirds of the height of the tin. Meanwhile, while it having its final rise, place a tray of water on the bottom shelf of the oven to create steam (if you don't have a steam oven). Preheat oven to 220C/428F.  Bake the risen dough for 30 minutes. Allow to sit for about 10-15 minutes before eating. 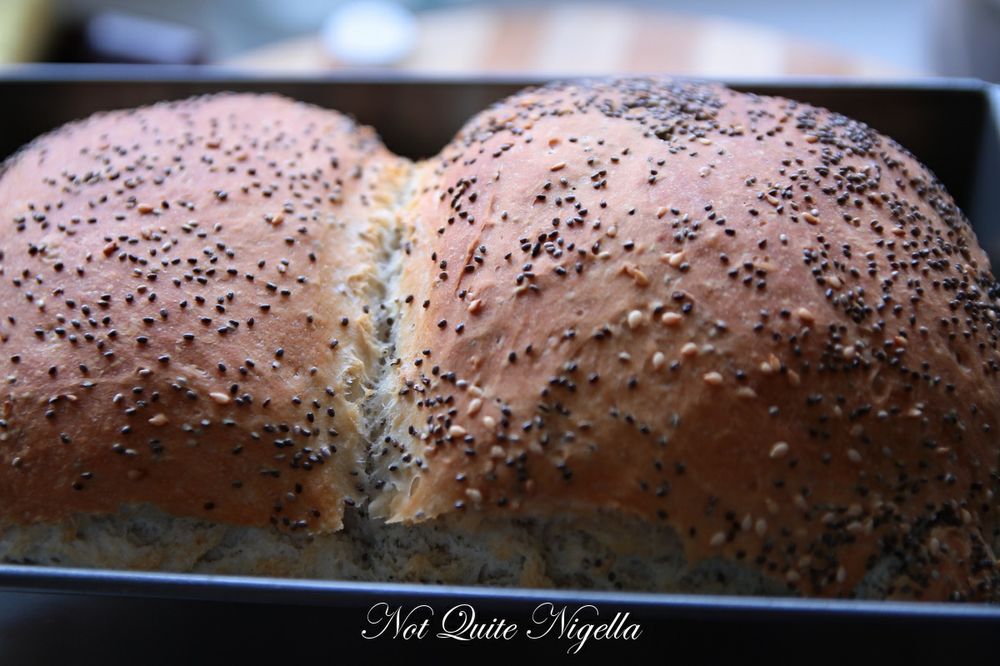 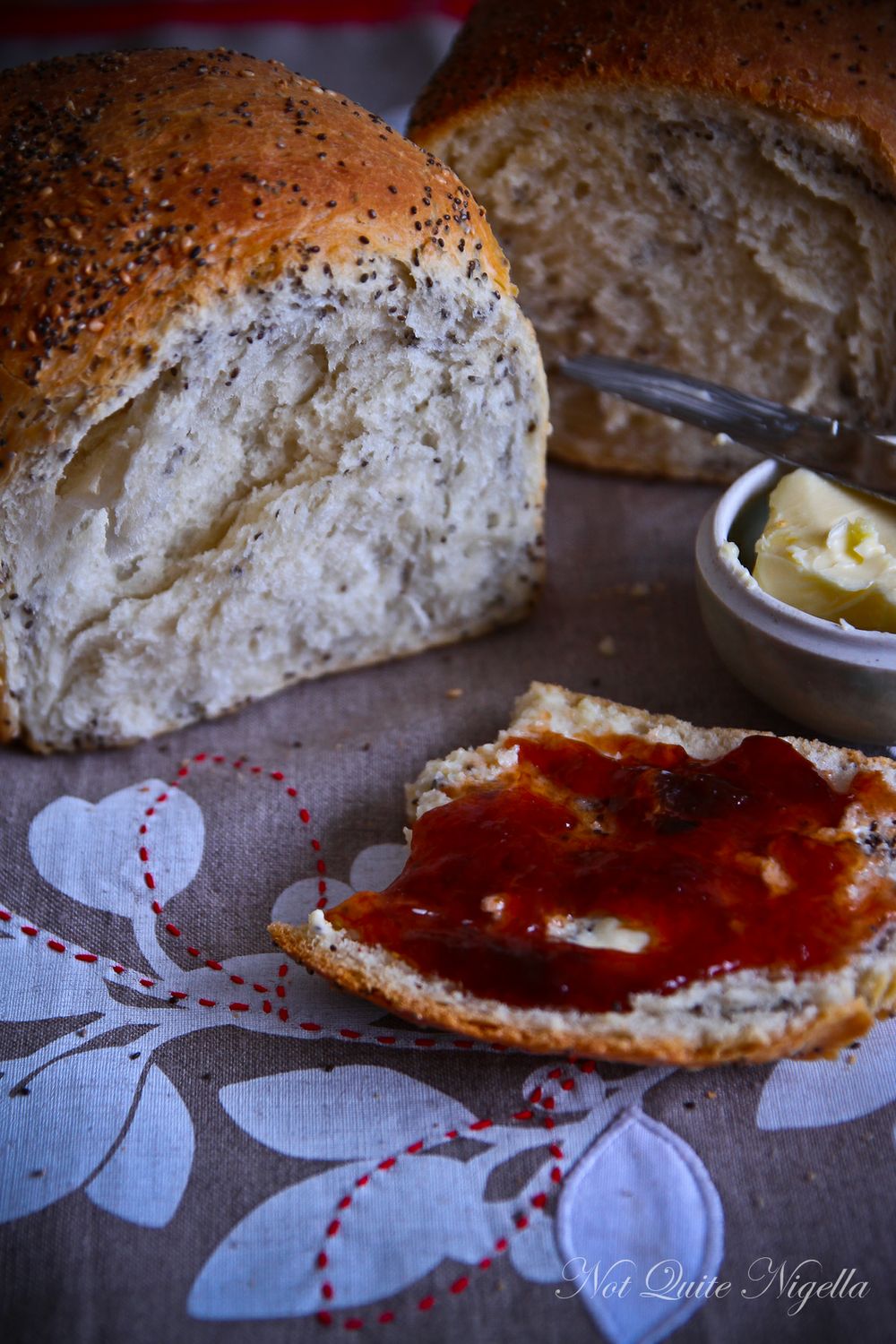