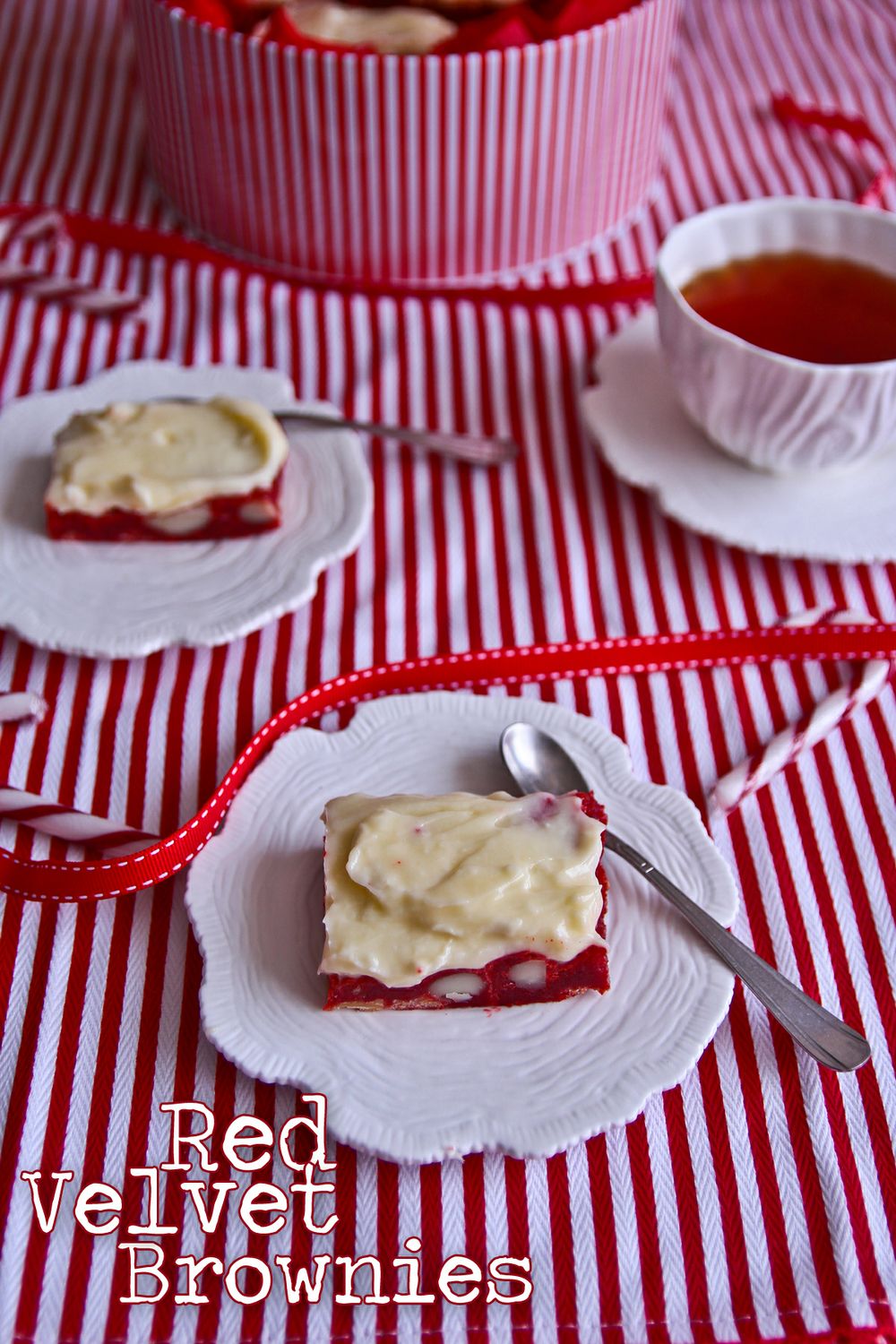 If there is a trend or obsession, I always want to read more about it. In most cases, I'm not often a first adopter, I'm more of a mid adopter but once I get started, I made up for tardiness with obsession. I'm late to the party for Homeland and I now find myself devouring episode after episode. It took me months to get into the whole Fifty Shades phenomenon too but then I wanted to do something with it so much that I registered the website address "www.fiftyshadesofgravy.com" with ideas on how to make items like trussed up pork loin; black & blue beef and "virginal vanilla" ice cream. I did not realise how little time I'd have to do it however.

Also, something kicked in around Christmas. It was that last burst of energy before collapsing, the date of which is 26th of December after Christmas Eve and Christmas Day celebrations. I'll have a day or two rest before regrouping and putting together a NYE spread. But in the meantime, I can't stop baking. I gave myself one last baking expedition before settling in for the round of Christmas get togethers with friends. It was something that I wanted to bake last year and thought that I'd have to experiment a lot with. Red Velvet is another trend that has some avidly embracing the vivid red cake while others scratch their heads about it. They will say things like "but it doesn't taste like anything in particular" and rue the amount of red food colouring while others like me, love the history of it and the bright burst of surprise colour. 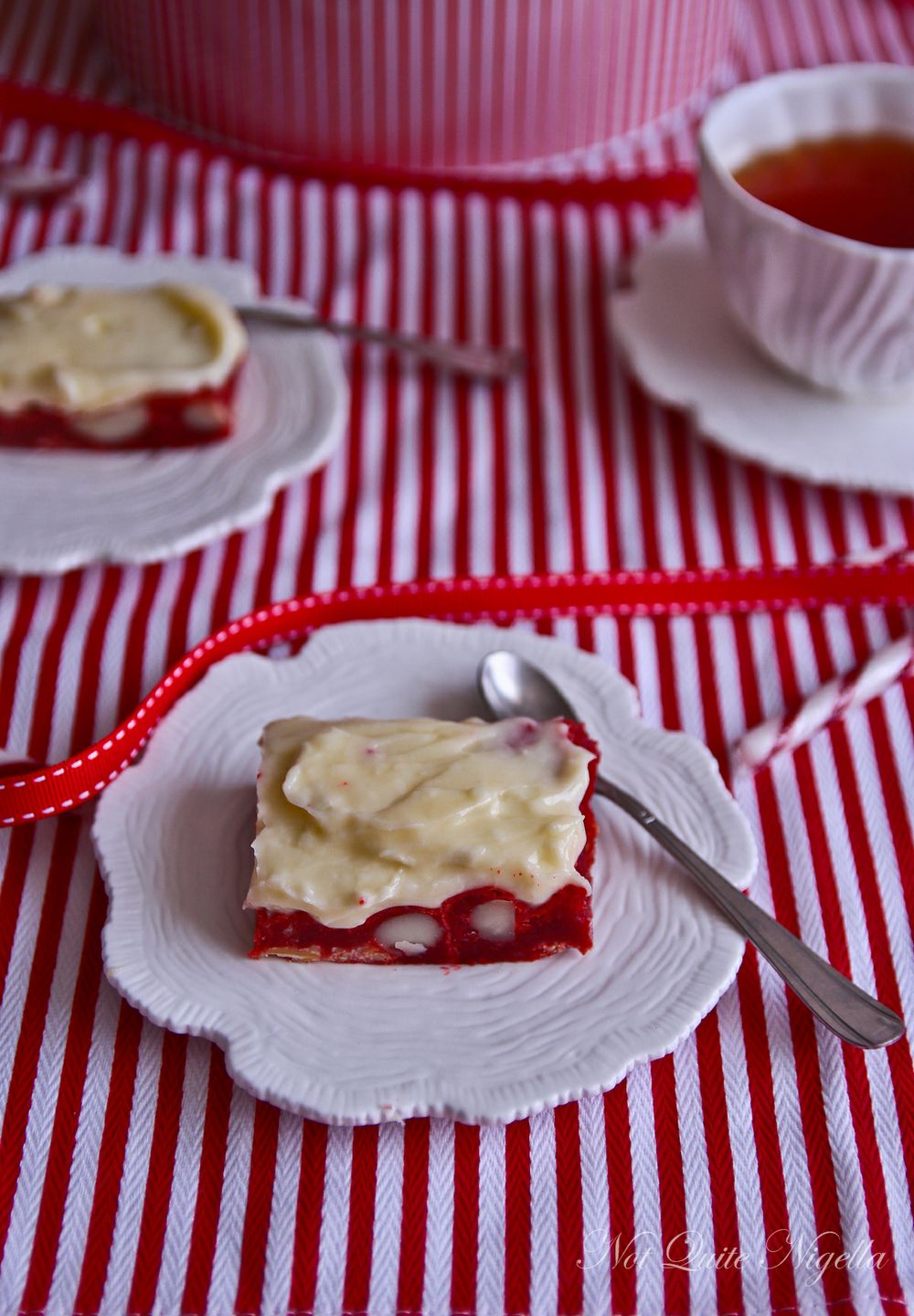 These red velvet brownies are different from a lot of the recipes that are floating around which often contain little to no chocolate and are more like moist cake. Brownies really need chocolate in them to be brownies and to get that distinct gooey, chewy texture and crackly crust on top. So this recipe uses white chocolate and a bit of dark chocolate and vanilla extract as red velvet cake has a little cocoa and vanilla to give it flavour. The white chocolate being so sweet already means that I've completely omitted the sugar from the cake part and added a cream cheese topping because red velvet comes with either a cream cheese or buttercream icing and I'll use any excuse for cream cheese frosting.

There's no use pretending. To get the red velvet colour, you need red colouring. There's no use being shy about it or only using a bit and then being disappointed that it's a pale washed out red. Embrace the red. Go for the red. Santa would.

So tell me Dear Reader, are you one of those people that likes or doesn't like red velvet? And are you ready for Christmas? Our celebration starts on the 24th of December for a family dinner at our place where I'll be cooking up a storm.

P.S. Santa and I won't be offended if you omit the red food colouring ;) 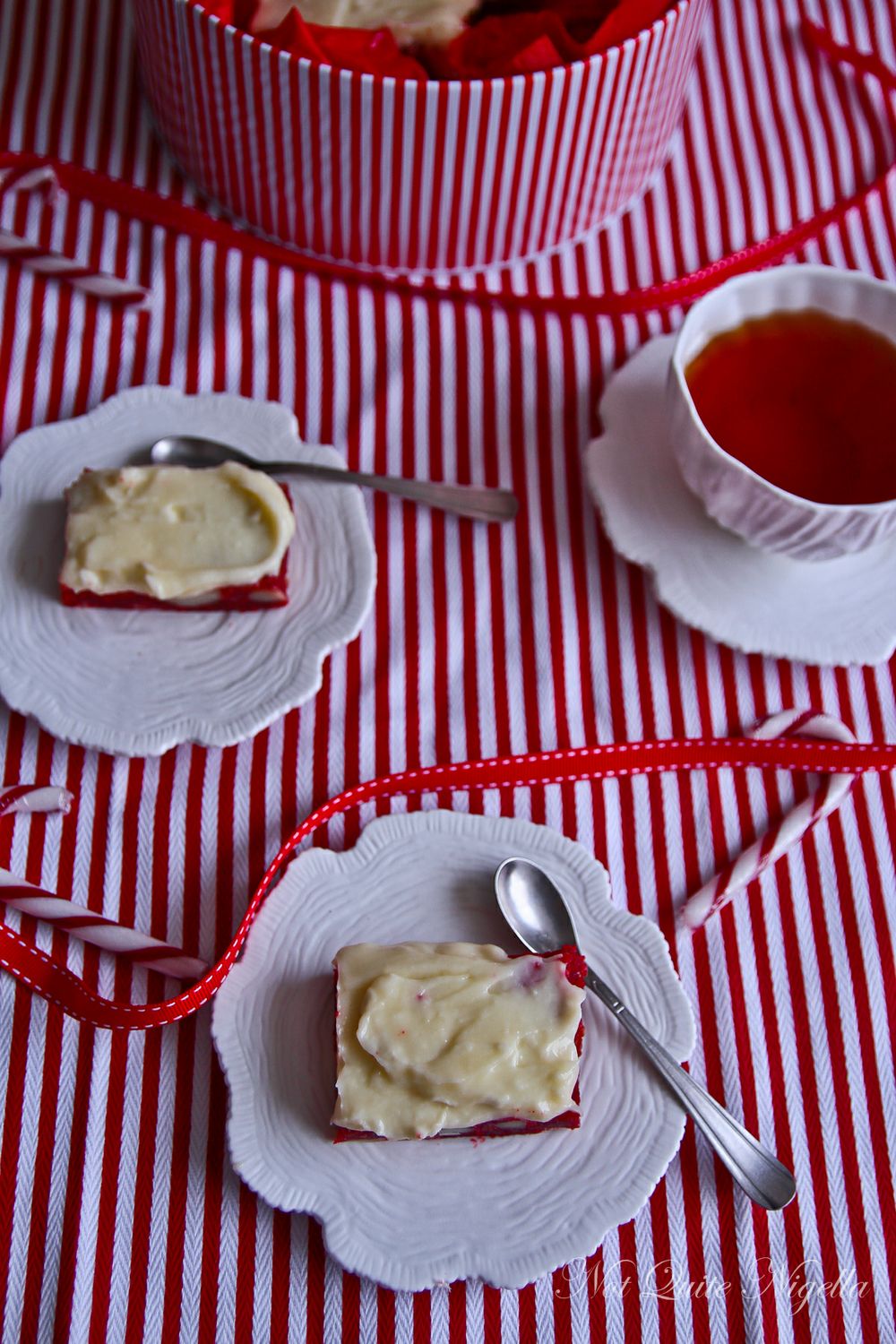 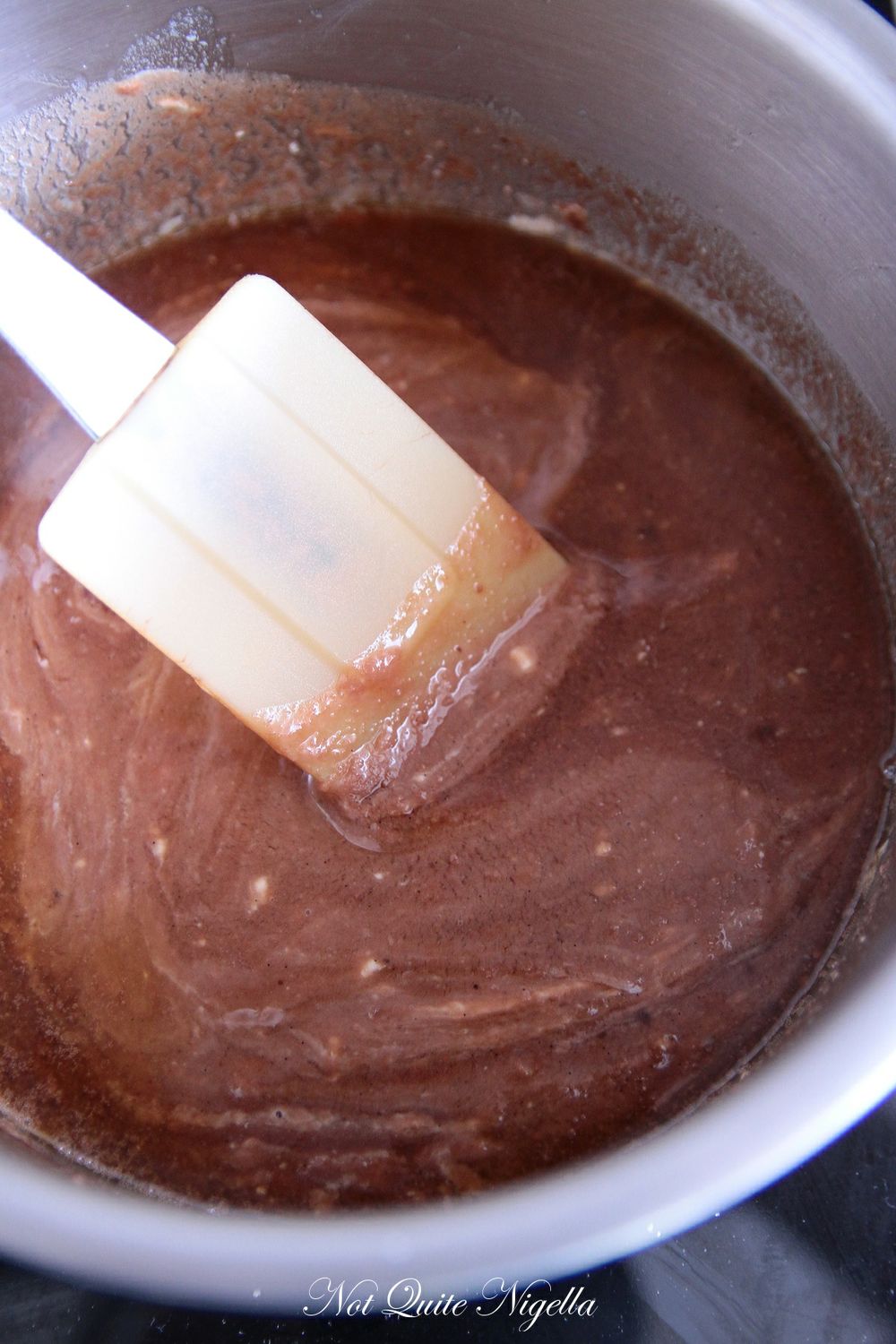 Step 1 - Preheat oven to 175C/347F. Line a loaf tin with parchment. In a saucepan, melt the chocolate and first lot of white and dark chocolate. Remove from heat and allow to cool for about 5 minutes. Beat in eggs one at a time incorporating well and then flour, red colouring essence and vanilla. 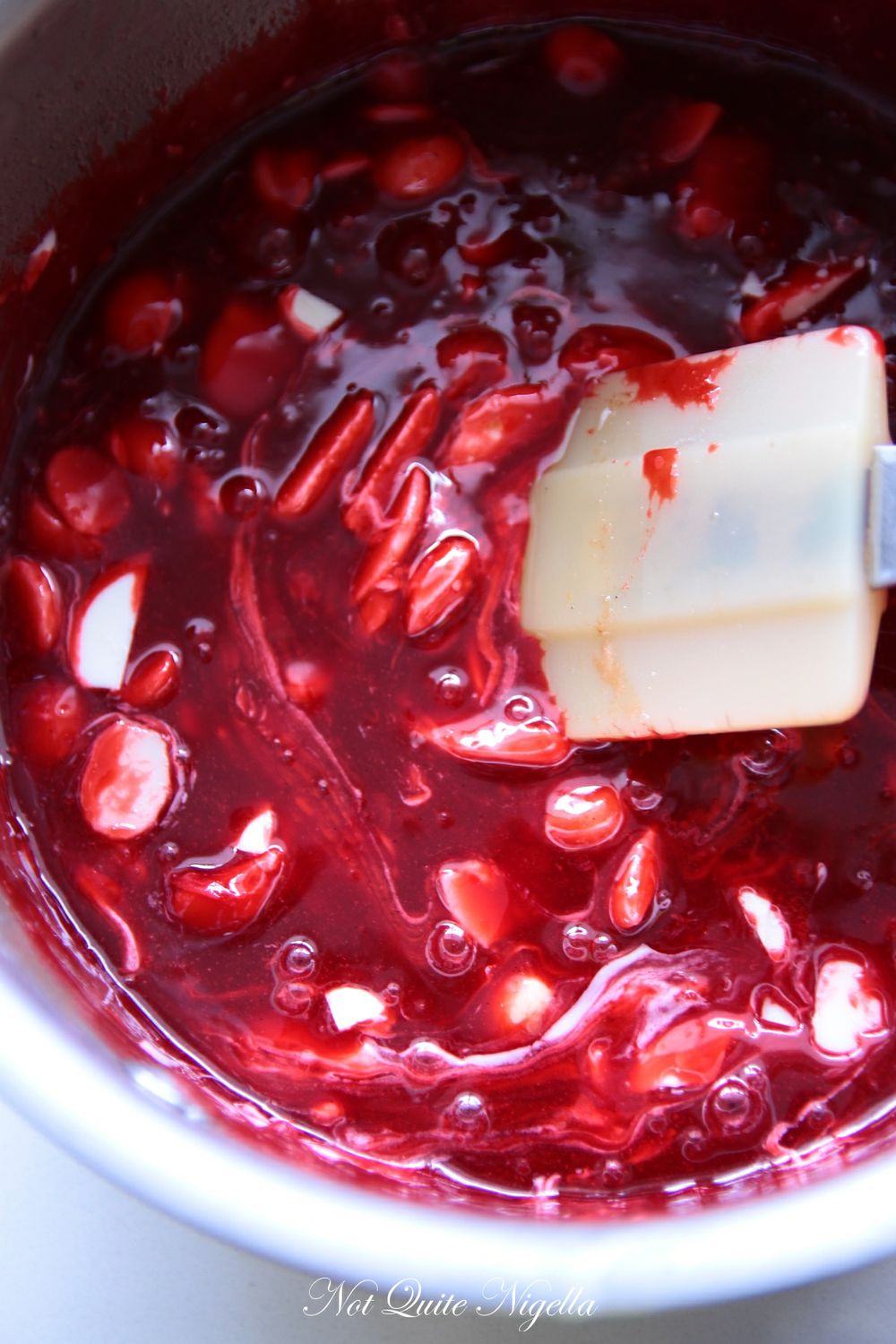 Step 2 - Then gently stir in the toasted macadamia nuts and white chocolate chips and pour into the prepared tin. Bake for 25 minutes and then allow to rest in the tin as it is very gooey and needs time to set. 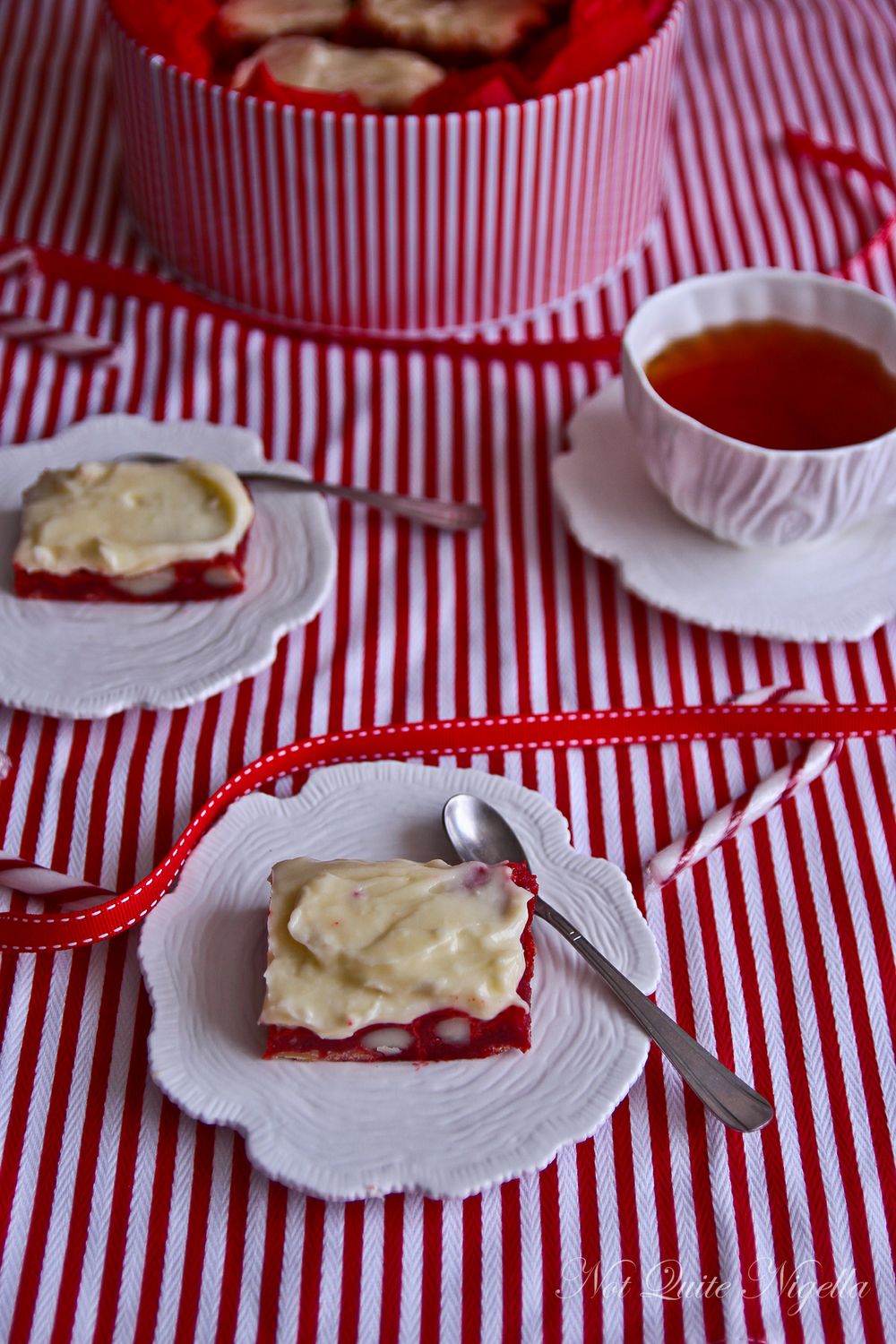