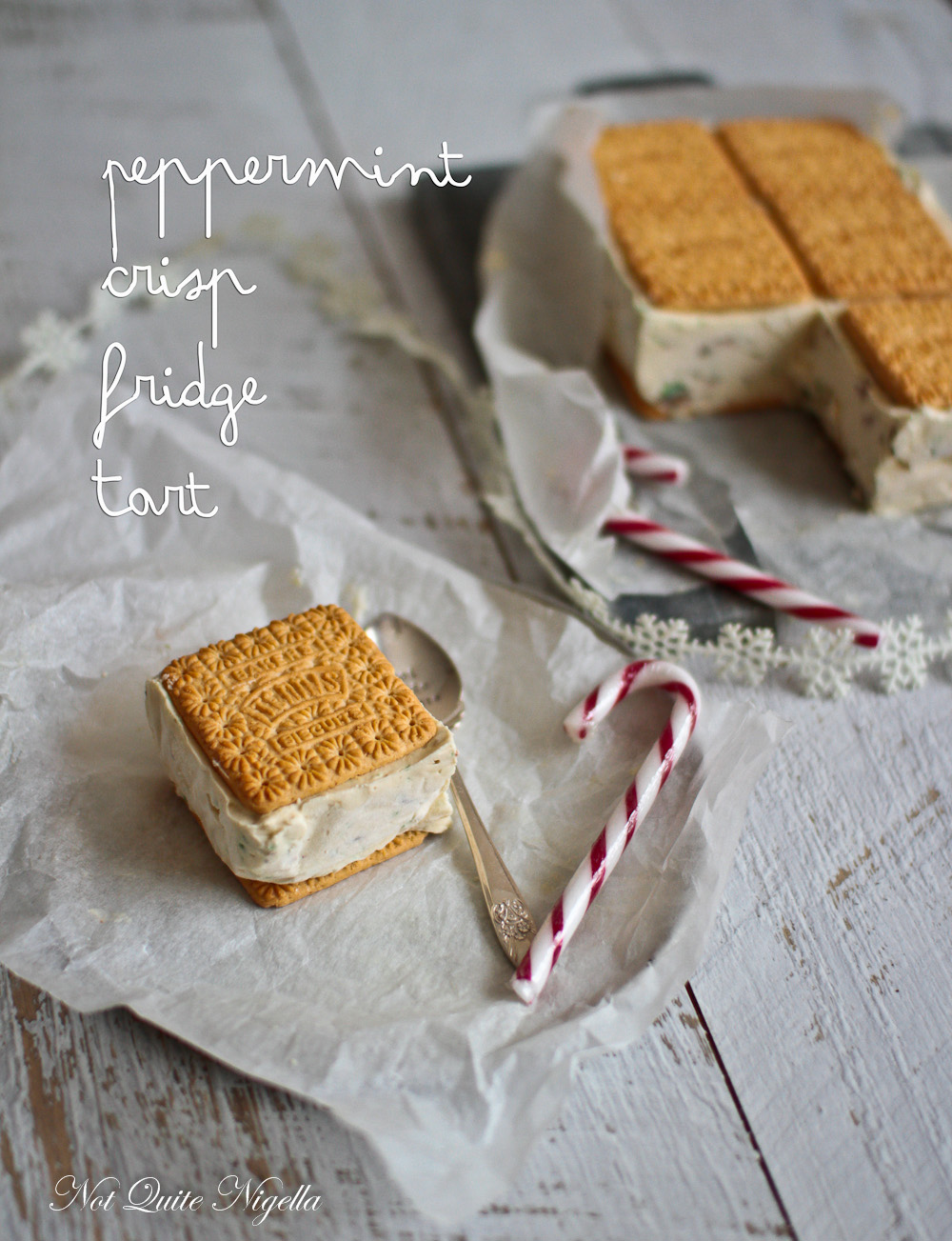 Have I mentioned how much I adore my readers? From the ones that make my dishes to the ones that share recipes there is no shortage of foodie inspiration and love. Last week when I made the South African Milk Tart or melktert a lovely lady called Elana asked if I had ever tried a South African Peppermint Crisp fridge tart.

You know Peppermint Crisps right? They're a chocolate bar with a crunchy crispy green peppermint layer covered in chocolate. Even though I've eaten plenty of these I hadn't ever heard of this tart. Elana then linked me to a recipe and when I saw how easy it was to make (and how appropriate for Christmas) I hotfooted off to the store to buy some of the chocolate bars straight away.

The ingredients list is mercifully short. I say mercifully because I feel as I am typing, as though the world is trying to be as annoying as possible this week. There's just four ingredients in a traditional Peppermint Crisp tart. Yes four!! 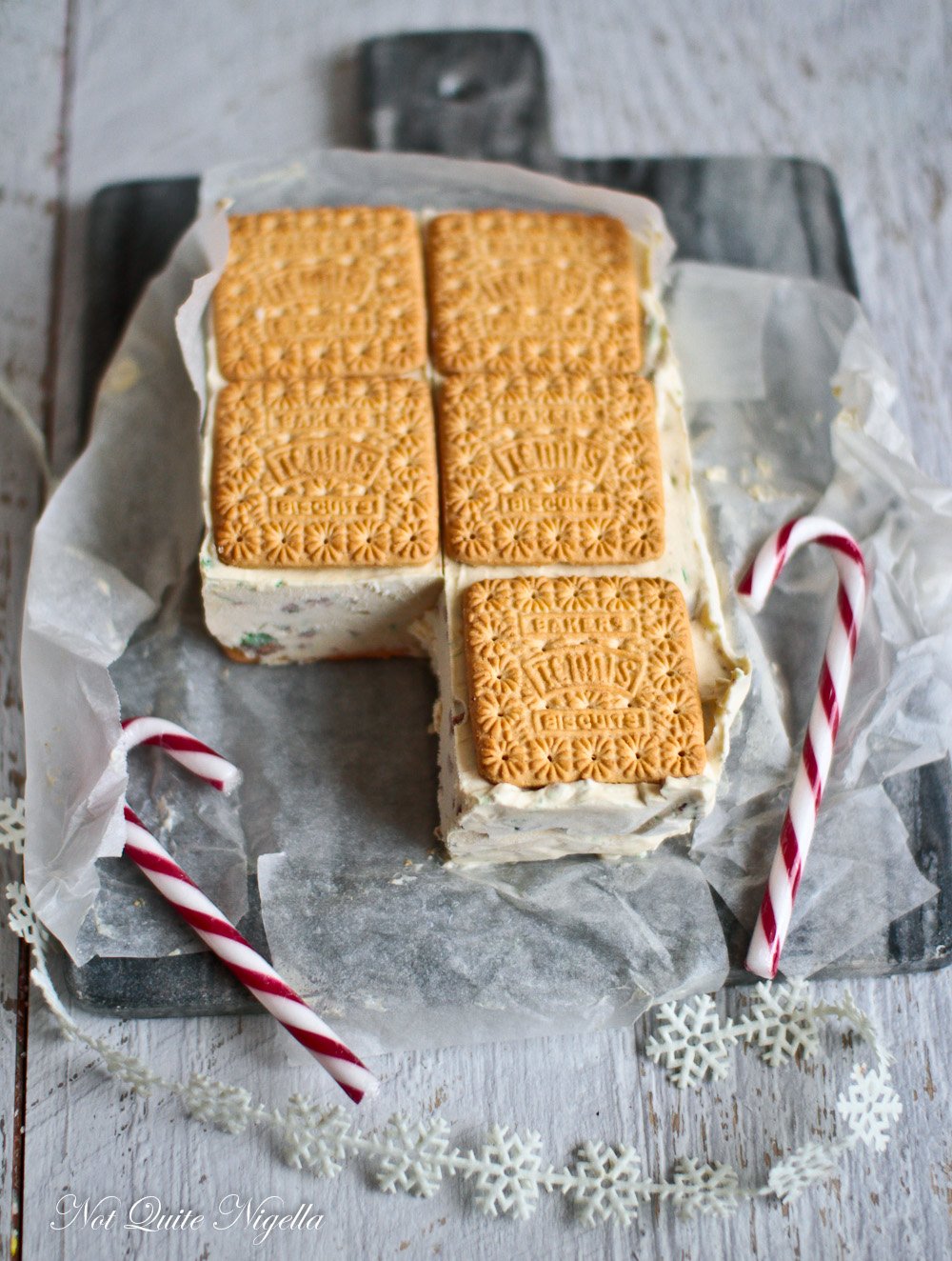 Tennis biscuits are a South African biscuit that you can find at some supermarkets. They're a square, coconut cookie and portion up perfectly in a 8x8inch tin but don't worry you can use Marie biscuits or similar plain biscuits. Because it was a record breaking heat this past week in Sydney I decided to keep some as ice cream sandwiches and some as a refrigerator slice. It's up to you which you prefer.

While I'm doing the hard sell, everything can be done in about 10 minutes. The inside is a super simple mix of whipped cream, caramel top and fill (I used home made salted caramel) and crushed Peppermint crisp bars. You then layer with the cookies and you're literally done. 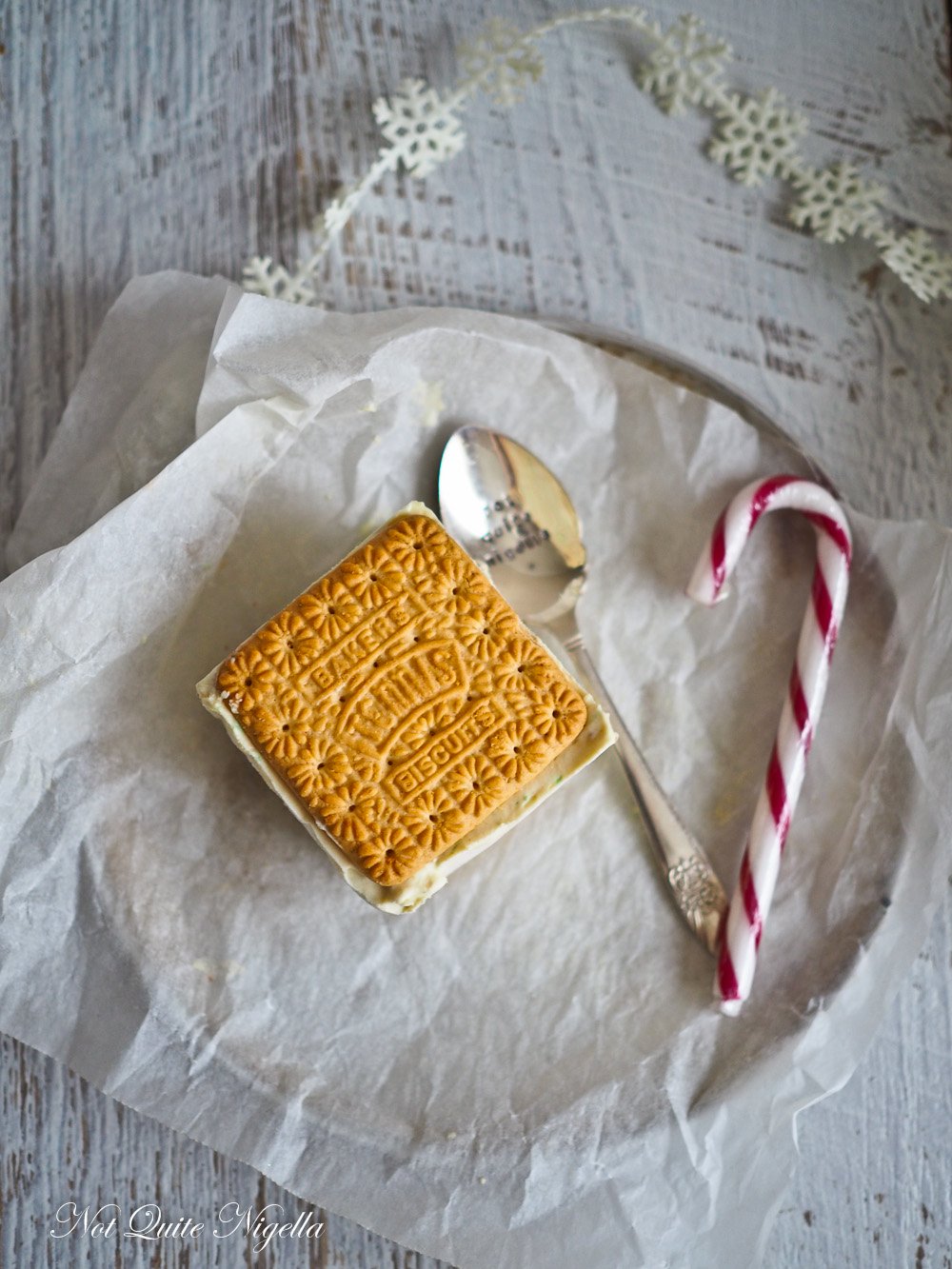 I must admit my version is a lighter version than the original recipes suggest but I don't think (in my humble opinion) that they suffer because of this. In fact quite the opposite happened. I replaced some of the cream with natural yogurt that gave it an amazing slightly tangy cheesecake style flavour and I reduced the number of Peppermint Crisp bars because usually the recipe requires 10 of them and I simply didn't buy enough and then I realised that it was delicious with just the few that I bought!

Oh I didn't mention the flavour did I? They are incredibly moreish! Like as in I need to keep them in the freezer because if I keep them in the fridge I will just eat them all. At the risk of annoying recipe purists I think I preferred the version with the yogurt for the added cheesecake flavour and the texture of the whole thing was so airy light I didn't even feel like I was eating anything overly sweet or naughty. And yes Dear Reader, these are a definite pushy recipe. But hey at least it's an easy one for Christmas!

It may also have you feeling something like, "Christmas, we can do this!!!""

So tell me Dear Reader, are you ready for Christmas? And are you feeling as though the world is being a bit trying this week? What is your favourite chocolate bar? 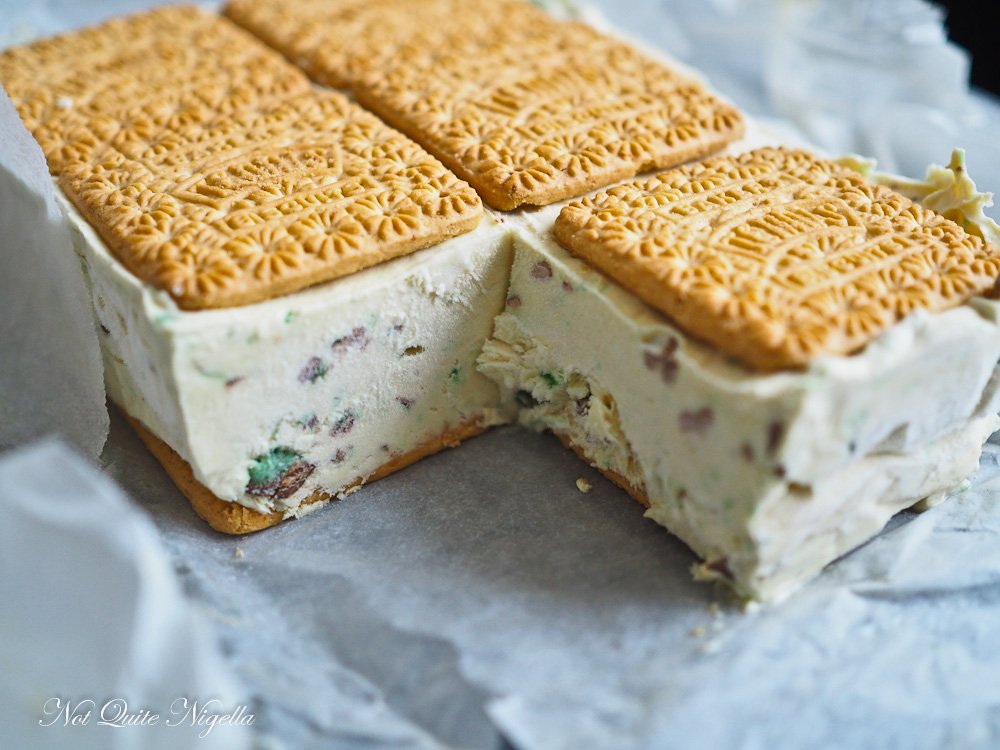 Cooking time: 0 minutes (unless you make your own salted caramel sauce)

If your supermarket is a relatively large one and has a South African section (some do if you live in an area with a lot of SA expats) then Tennis biscuits are usually found there.

Step 1 - Line a 20x20cm (8x8inch) with parchment. Place a layer of the Tennis biscuits on the base. Whip the cream until you get soft peaks and then in another bowl loosen up the caramel sauce by whipping it. Add the caramel sauce into the whipped cream and then add in the chopped Peppermint Crisp bars. 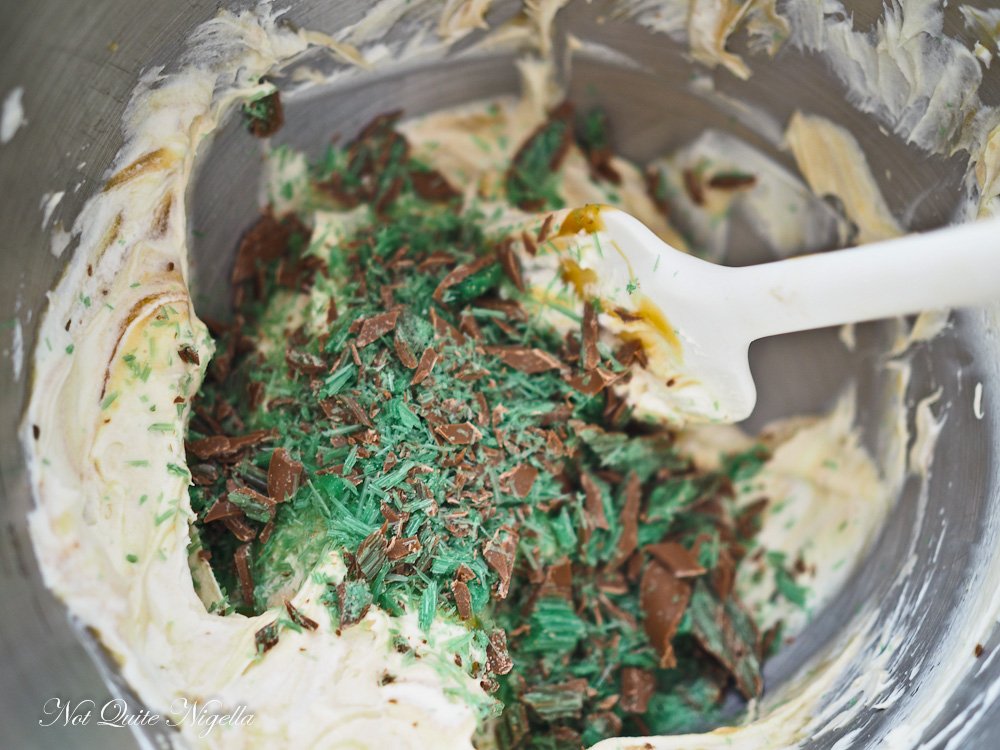 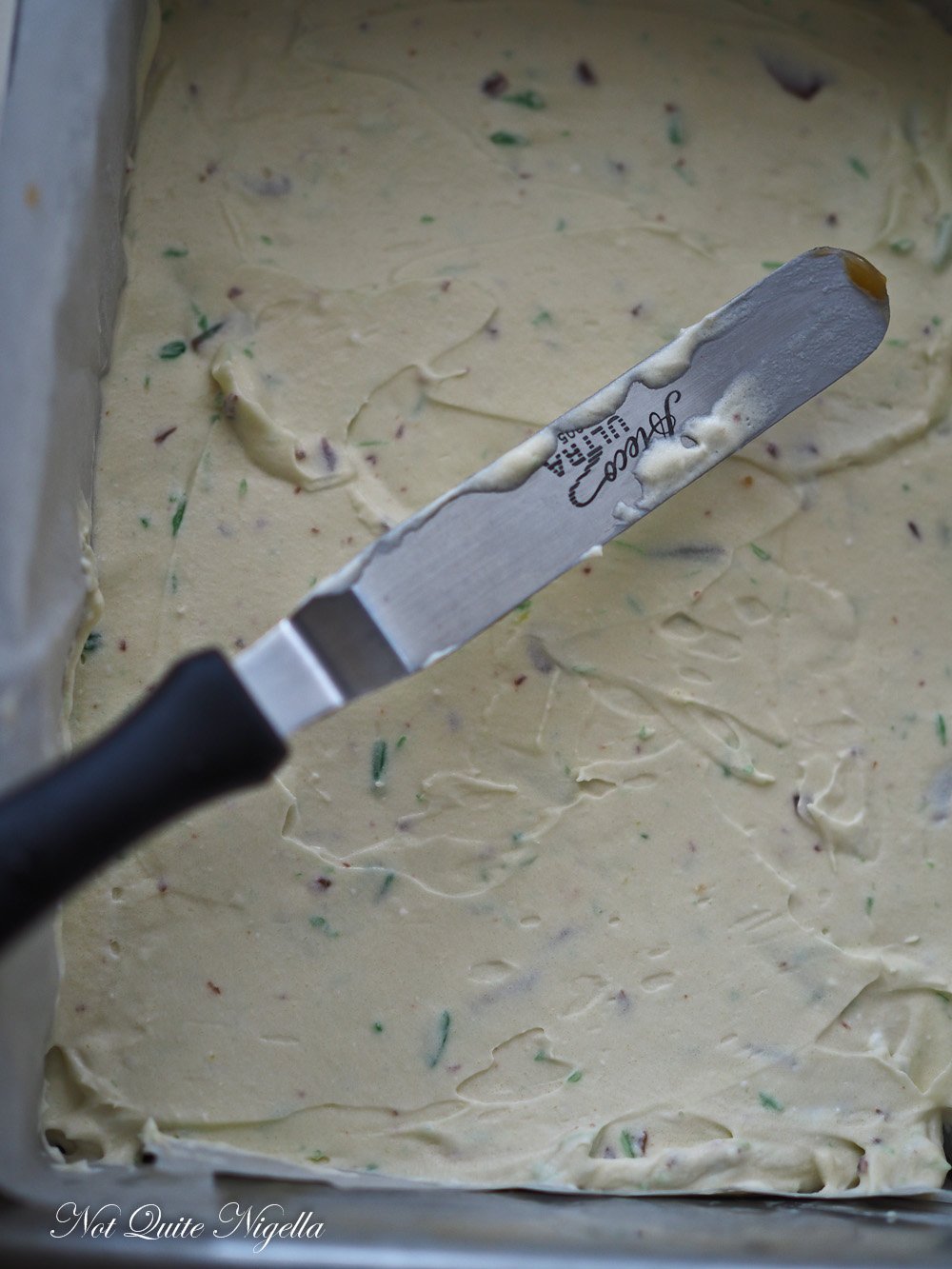 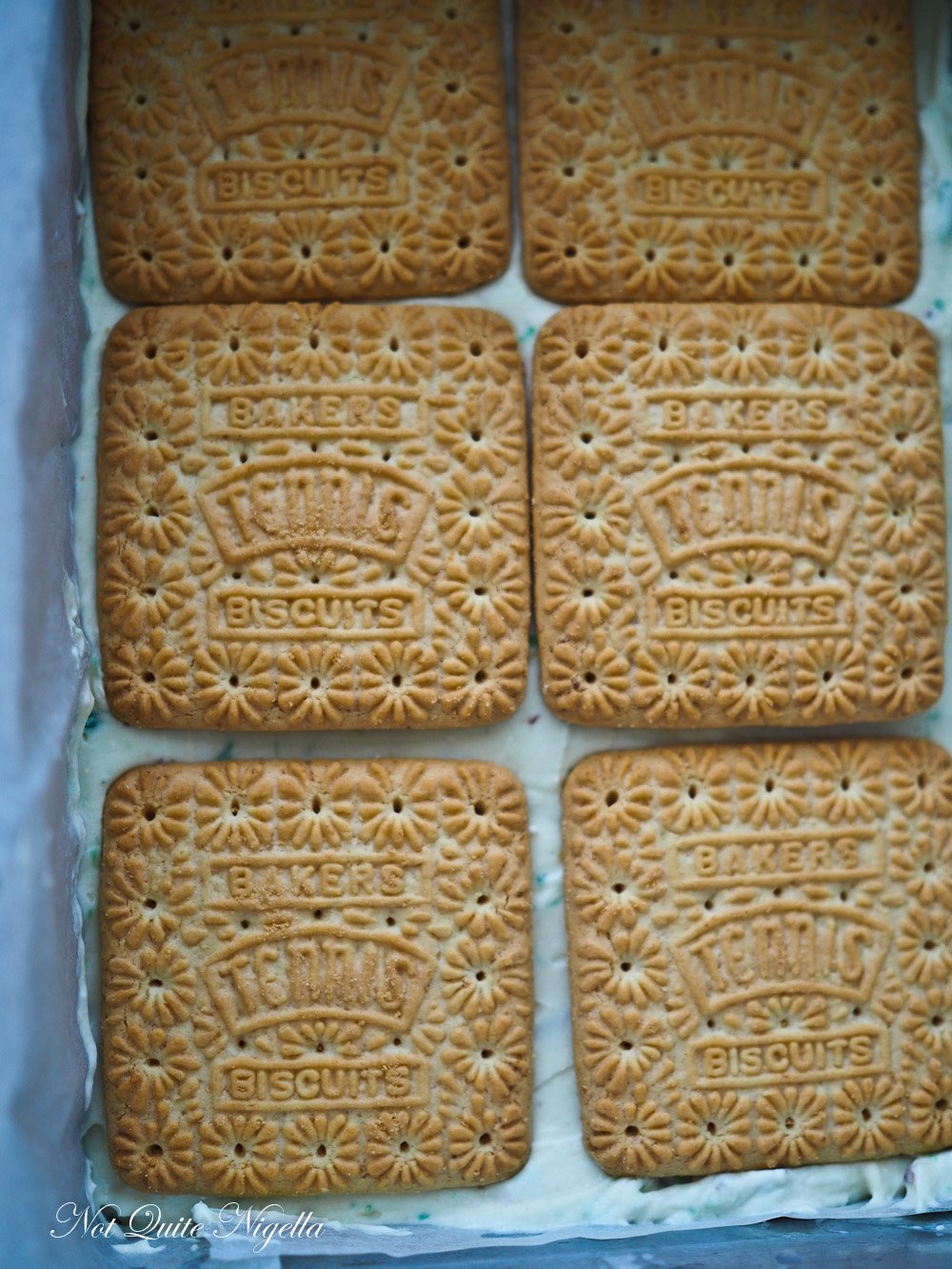 Step 1 - Melt the butter and the brown sugar in a heavy based saucepan on medium heat until melted and thick. Add the cream (it may make a bit of a noise) and then allow to become a smooth sauce (make sure that the sugar has dissolved). Remove from the heat and allow to cool for 15 minutes. Then sprinkle salt and test for seasoning (it may still be quite hot). This can last in the fridge for up to 3 weeks to 1 month.