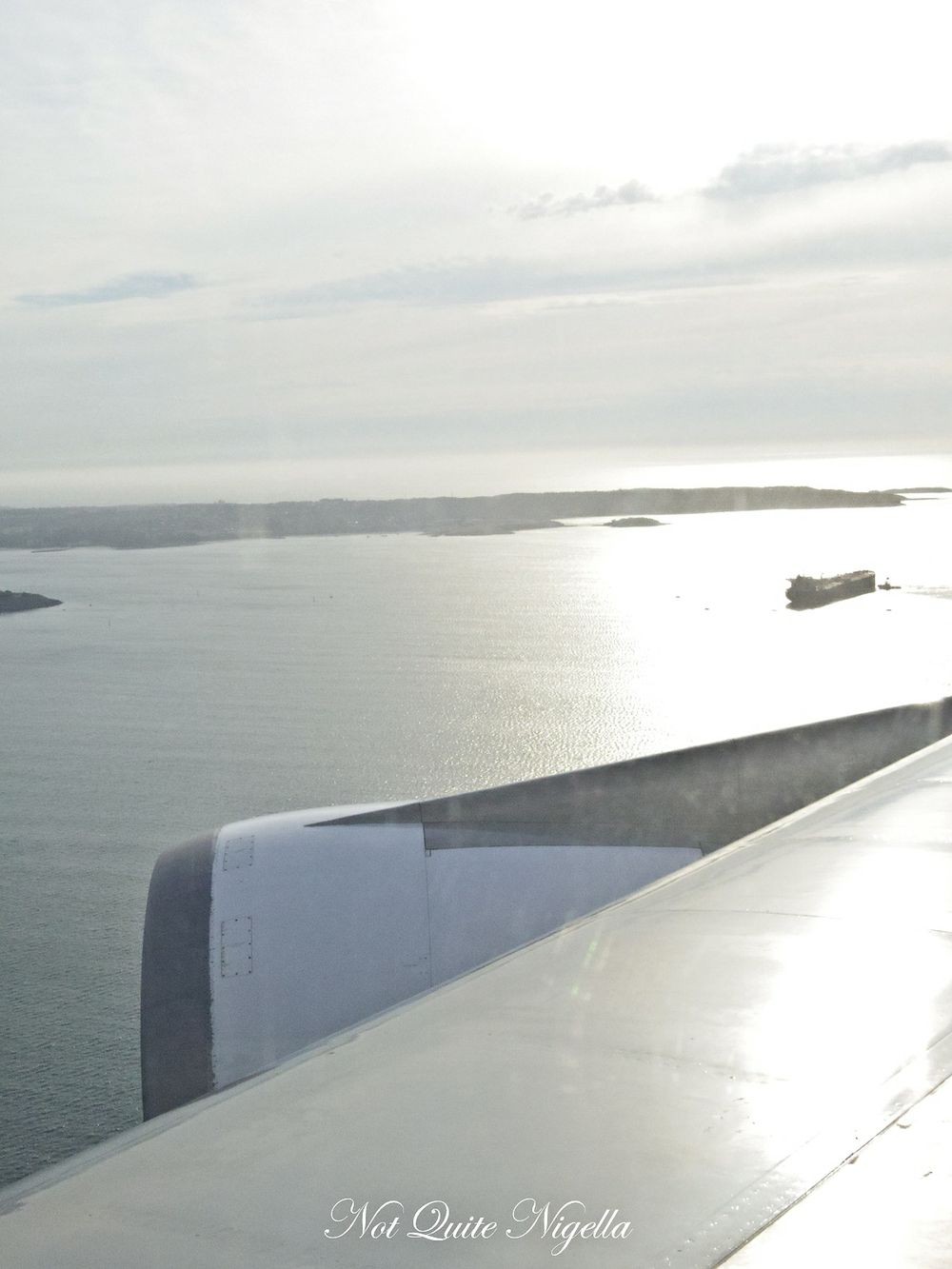 I know that there are plenty of plane enthusiasts. Friends of mine are examples of them. They know every single plane and have studied the configuration, knowing the best seats. They check in in advance making sure to get the seat that they want and perhaps they even have a favourite seat on a type of aircraft. Someone once told me about a woman who pitched a right royal fit in the business class cabin when the plane was switched last minute and she couldn't get the seat that she wanted. She wanted the A380, as many do, the plane is newer and bigger and has more features. On this leg we are trying out Qantas's business class offering on a Boeing 747-400 as opposed to the A380 we had on the way over. 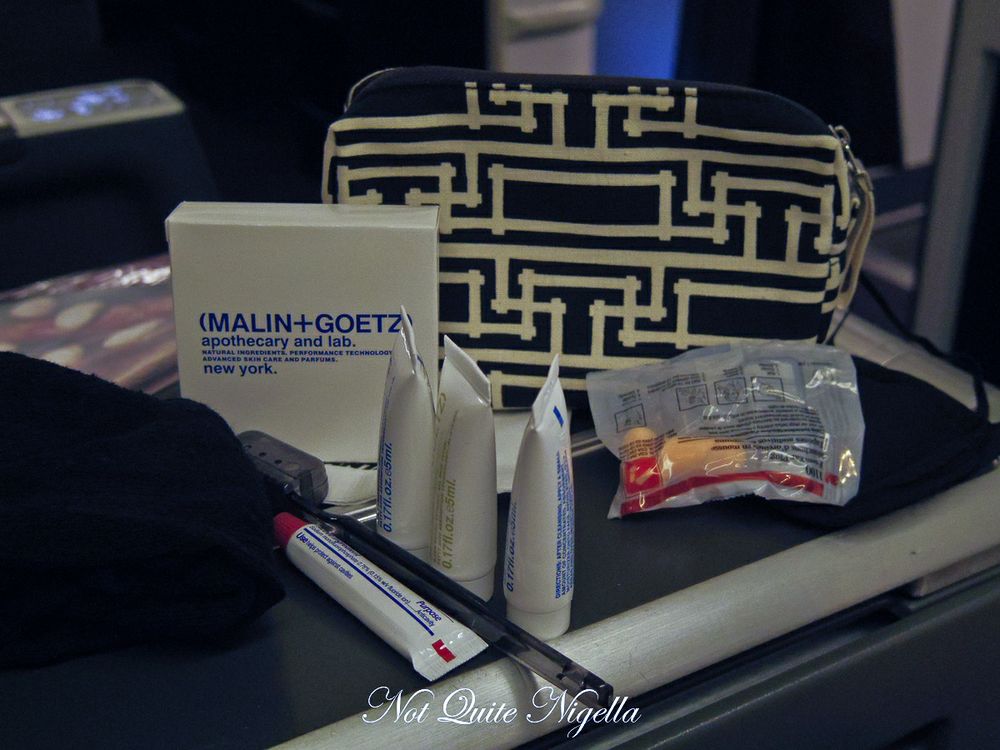 But before we get on the plane, there's the business of the lounge. We've been all over the place in Hong Kong during the day including a visit to a farm so we're all feeling a little in need of a shower. There is also food but I'm not really hungry and having eaten for five days straight and my clothes are feeling a bit tight so I take a bottle of sparkling and use the internet and then go to have a shower. The shower rooms are big and come with Molton Brown toiletries including body lotion in a lovely scent. A toothbrush and toothpaste and a comb, face washer and towel were provided. I wish I had remembered to take a photo of these as I had my trusty Pentax Q for those moments when taking out a whopping great DSLR causes people to recoil. Feeling slightly more human although not exceptionally, we boarded the flight.

There are several sections for the business class section and I've been fortunate to have been allocated a window seat with nobody next to me. There is a middle section of three seats with two seats on each side, which I've seen on an Emirates business class flight and I overhear one  passenger airing his dissatisfaction about being seated in the centre. 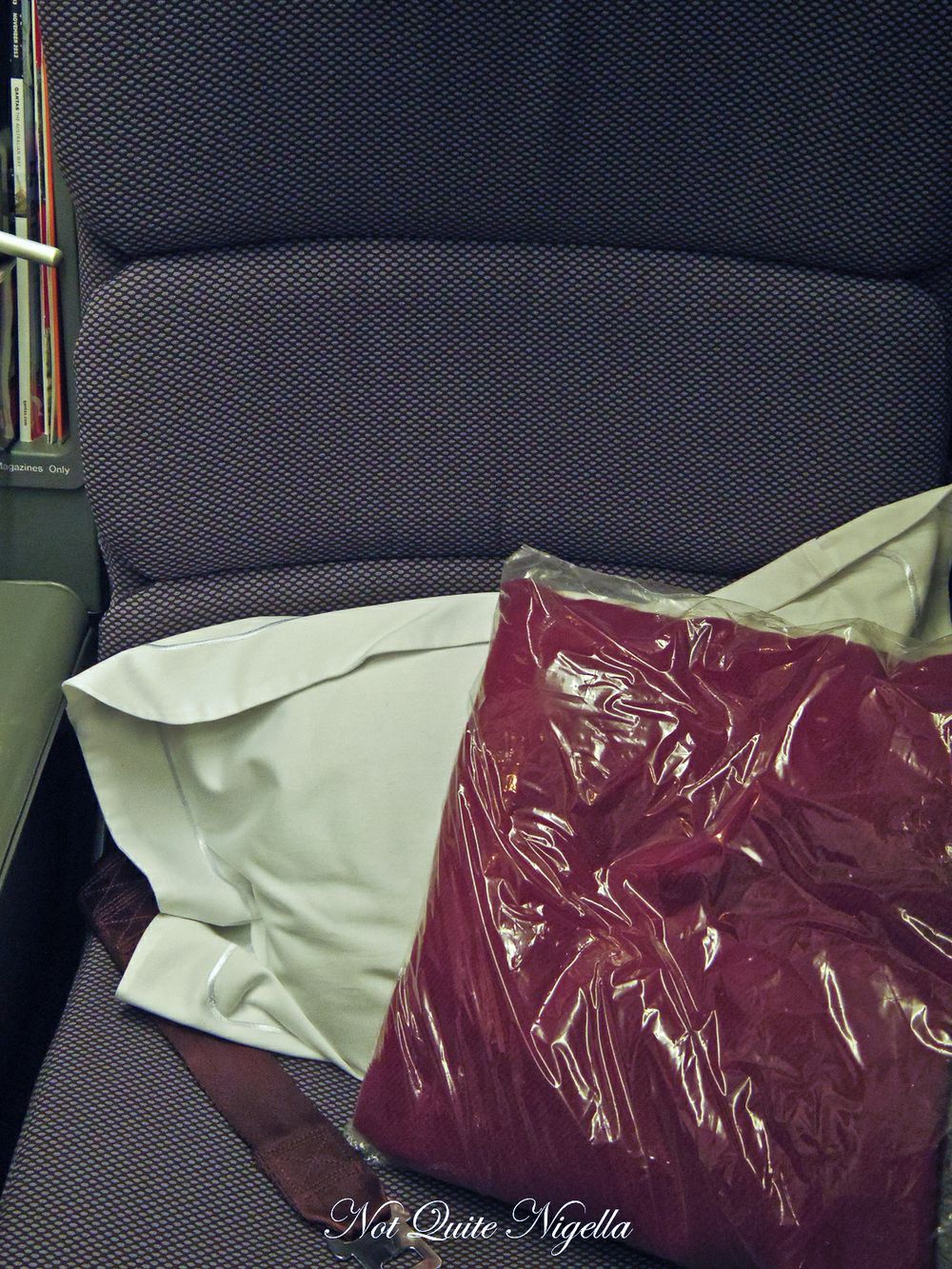 The dinner and breakfast menus are sitting on the seats along with a blanket and pillow. I like to get changed and take out my contacts and remove my makeup before take off and they hand out the pyjamas and amenity kit. It's the same amenity kit with a Florence Broadhurst print on the outside-this apparently is to change shortly to a Kate Spade designed one. I guess they have to keep changing things to keep passengers entertained! Inside are an eye mask, socks, toothbrush and toothpaste and tubes of Maelin & Goetz lip moisturiser, hand lotion and face cream. They also offer champagne, orange juice or water while we wait to take off. The magazine selection on this flight is more limited with only three publications available. 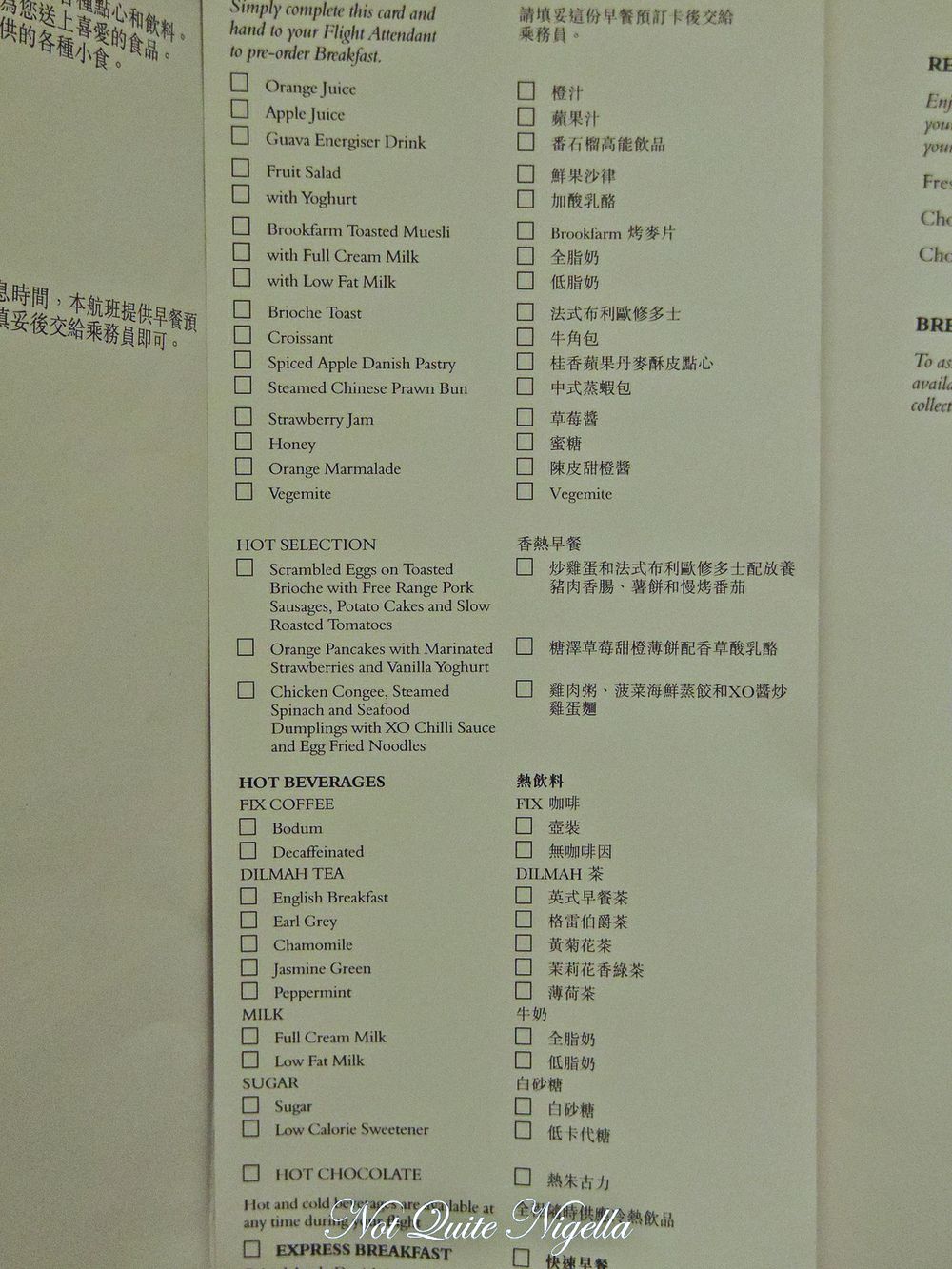 I study the menu while we take off and it's a clever idea much like a room service door menu where you tick what you want from a wide range of choice. There is also the option that you can tick if you don't want to be woken for your meal if you are sleeping which is a good idea. 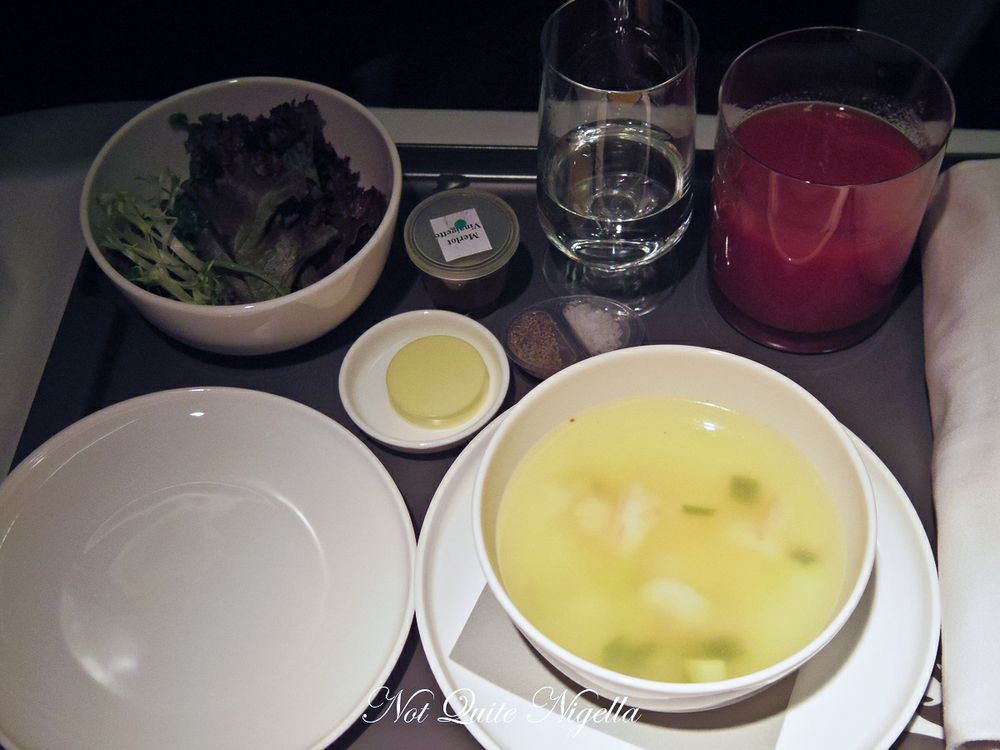 We start with an entree and I chose from the Chinese menu because even though this is a Rockpool designed menu, it was coming out of a Chinese port and I figured the Chinese food would be the best bet. The soup was a Chinese style prawn, scallop and winter melon soup which was quite nice indeed-a clear broth with tender seafood and soft bursts of winter melon. 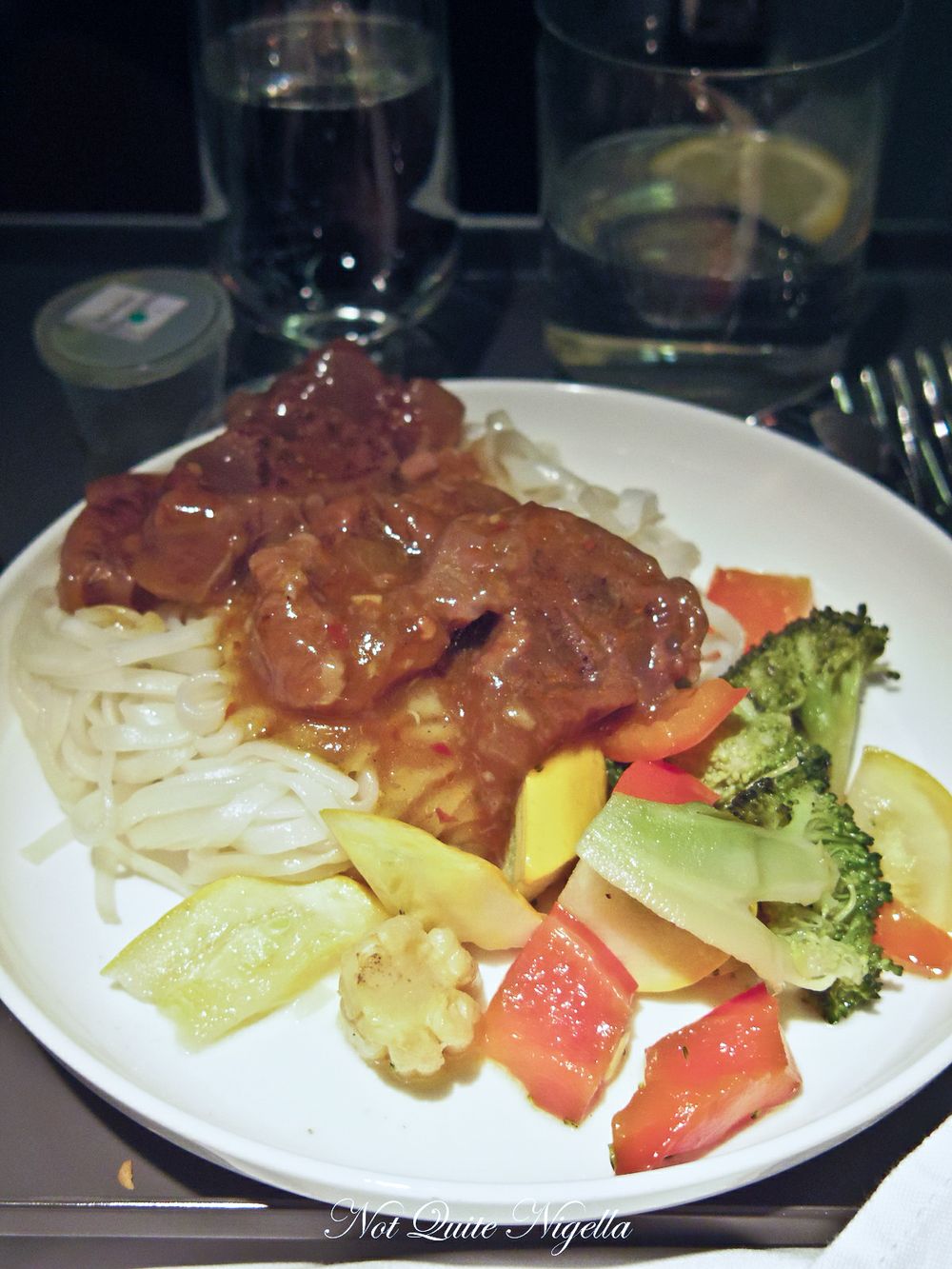 Dinner service is quite slow. It takes almost two hours after we take off to get to the mains. I only know because I was watching Magic Mike and I was eating the beef while watching some beefcake flex on screen and thinking how funny it was. This dish was nothing that I had expected. Even though it was Szechuan there was no spice to this at all and the beef came in large fatty pieces with a lot of hard and jellied fat in it. Some of it I just couldn't eat. I asked for more bread and it was warm and I wedged a bit of the beef into the bread. 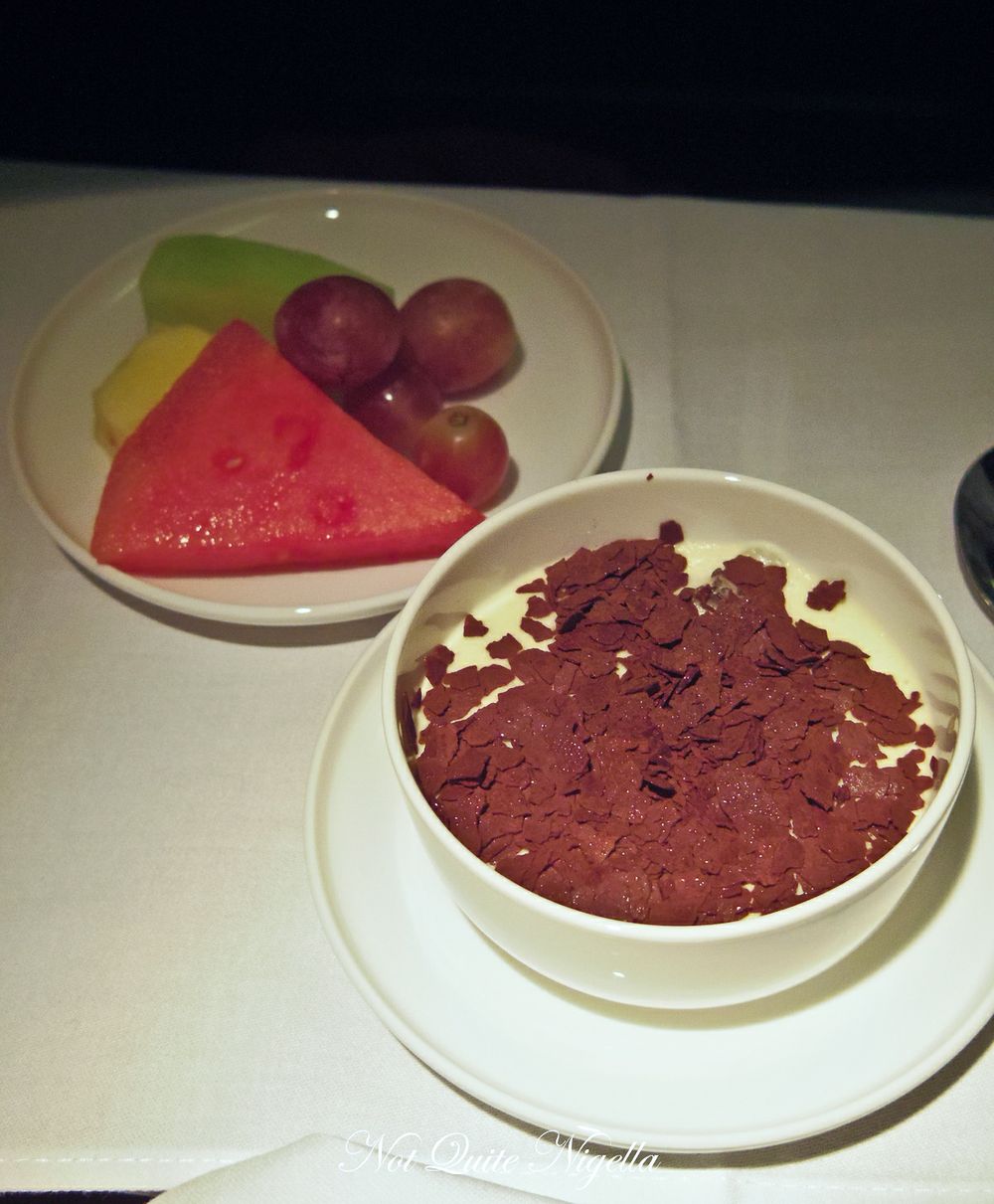 The trifle was probably not a wise choice and it proved to be a sugariffic concoction. I tried some of the chocolate on top and some of the dense dark chocolate mud cake underneath. I couldn't find any quince and I left most of this eating the Valrhona square instead and thinking how much better that chocolate was. The fruit was good though and quite refreshing and I'm full by the end. 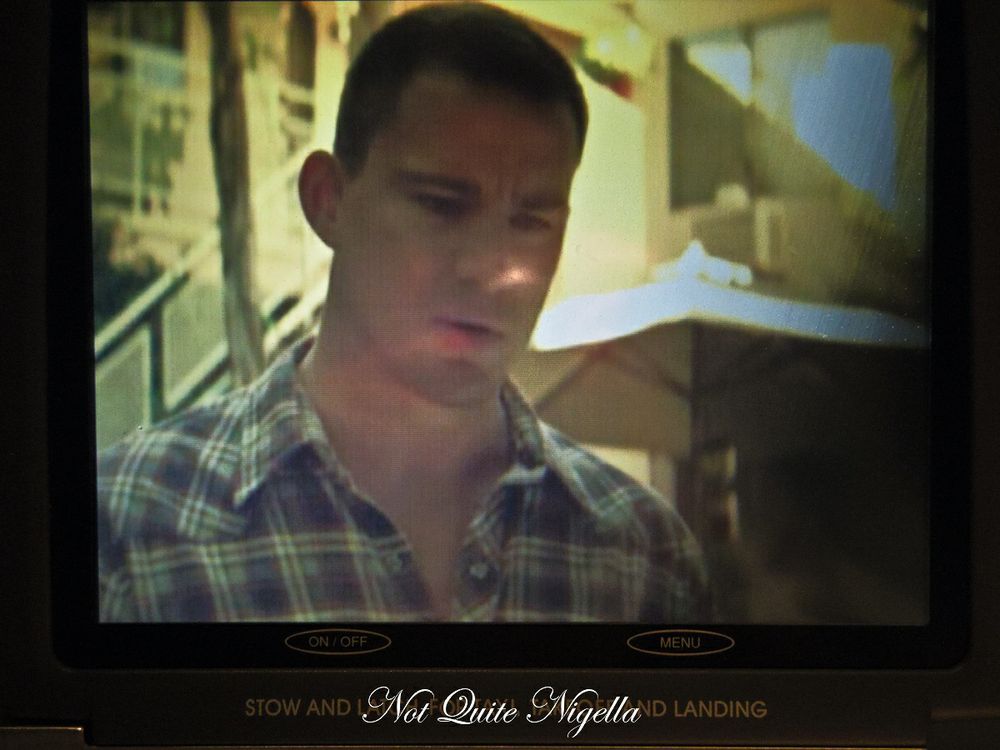 During the flight, there are snacks to choose from and I suppose as this is an overnight flight, there are less choices. There was whole pieces of fruit, chocolate brownie cookie and chocolate bars to choose from. I fall asleep watching Kath & Kimderella which isn't as bad as people say although the bed is not very comfortable and even with a recline of 172 degrees, the incline feels steeper than that. The A380 has fully flat beds and I'm starting to see the logic of checking on what sort of plane you get. Four hours later, the tinkling of the trays and raised shades indicates that it's breakfast time. 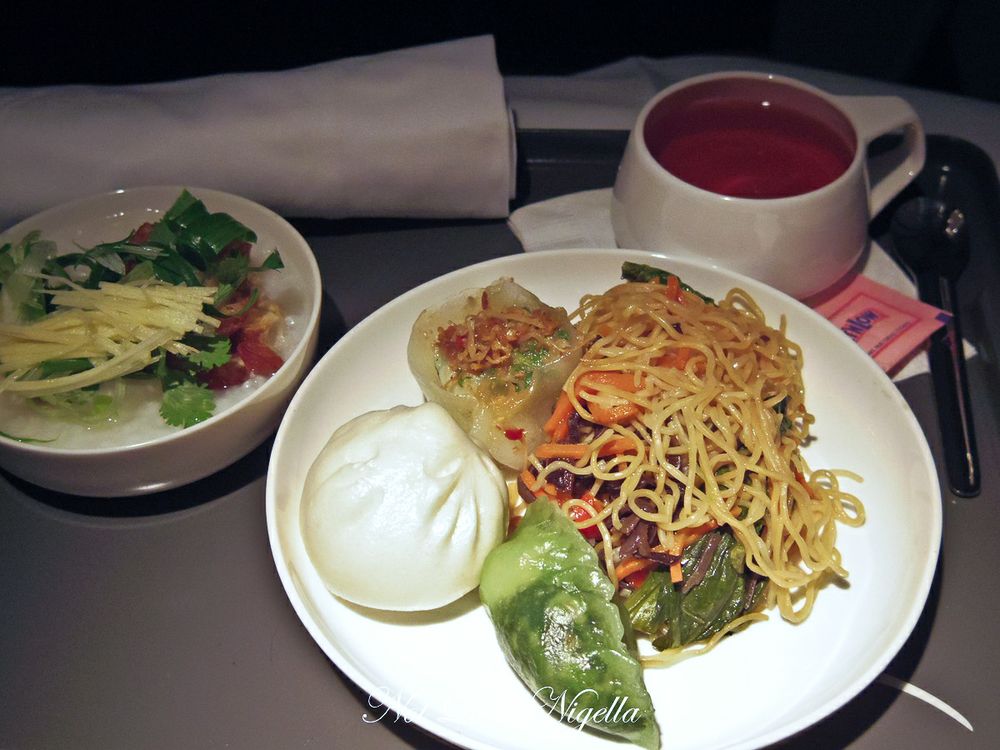 The breakfast that I ordered arrives and on the left in a congee which isn't too bad although the bowl is a bit full to mix it up. On the right are noodles which are always a novelty to have for breakfast for me and three dumplings, a nice prawn dumpling, a chicken steamed bun and a very strange and very spicy dumpling that I mostly leave. We're touching down and with the handy express path card we're given, we bypass the queues. I just have to declare my dried snake penis to the customs people!

When I declare it, the woman thought I meant dried snake beans but I did have to repeat penis a few times (much to the horror of another man opening up his luggage nearby for inspection). And if you're curious, it's fine to bring snake penis into Australia in small quantities apparently!

So tell me Dear Reader, do you look up the type of plane that you get and are you a plane enthusiast? And what's the strangest thing that you've declared at customs?

NQN tested out the flight as a guest of Qantas