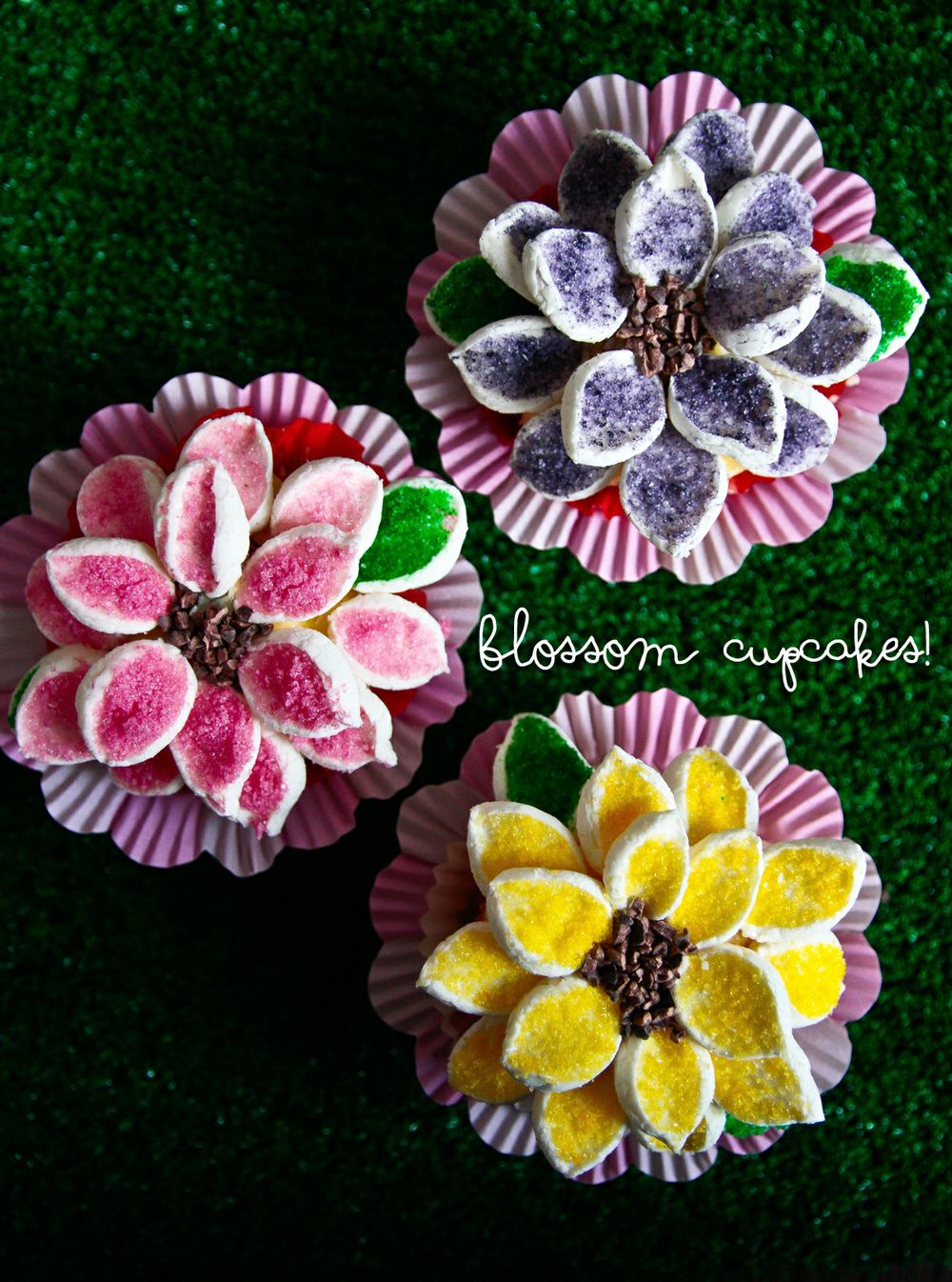 Dear Reader, at some of your request, I'm putting up some of the missing chapters of my book. The first series of missing chapters refers to how I got my book deal, which is a topic that I am often asked about. These chapters were removed from the book because my publisher felt like they took the reader out of the book which I think was a good decision. This chapter was called "The Book That Ate My Life." To read the first part, see here and the second part is here.

"And then the phone rang"

Well you don't start a chapter with that title without having some sort of news do you? We were packing for our trip to New Zealand. It was a trip about nine months in the planning and it was two days before the publisher's deadline in which they had to respond. One afternoon my phone rang. My agent asked if I was sitting down. I wasn't really, I was rushing around packing.

"Penguin want you and the offer is fantastic!" she said.

What was my response? It involved me saying "Oh my god" several times over and over again. Then I stepped outside my body and thought "Now that's not very eloquent is it now Lorraine?" and then I proceeded to apologise for not being able to say anything apart from "Oh my god!". 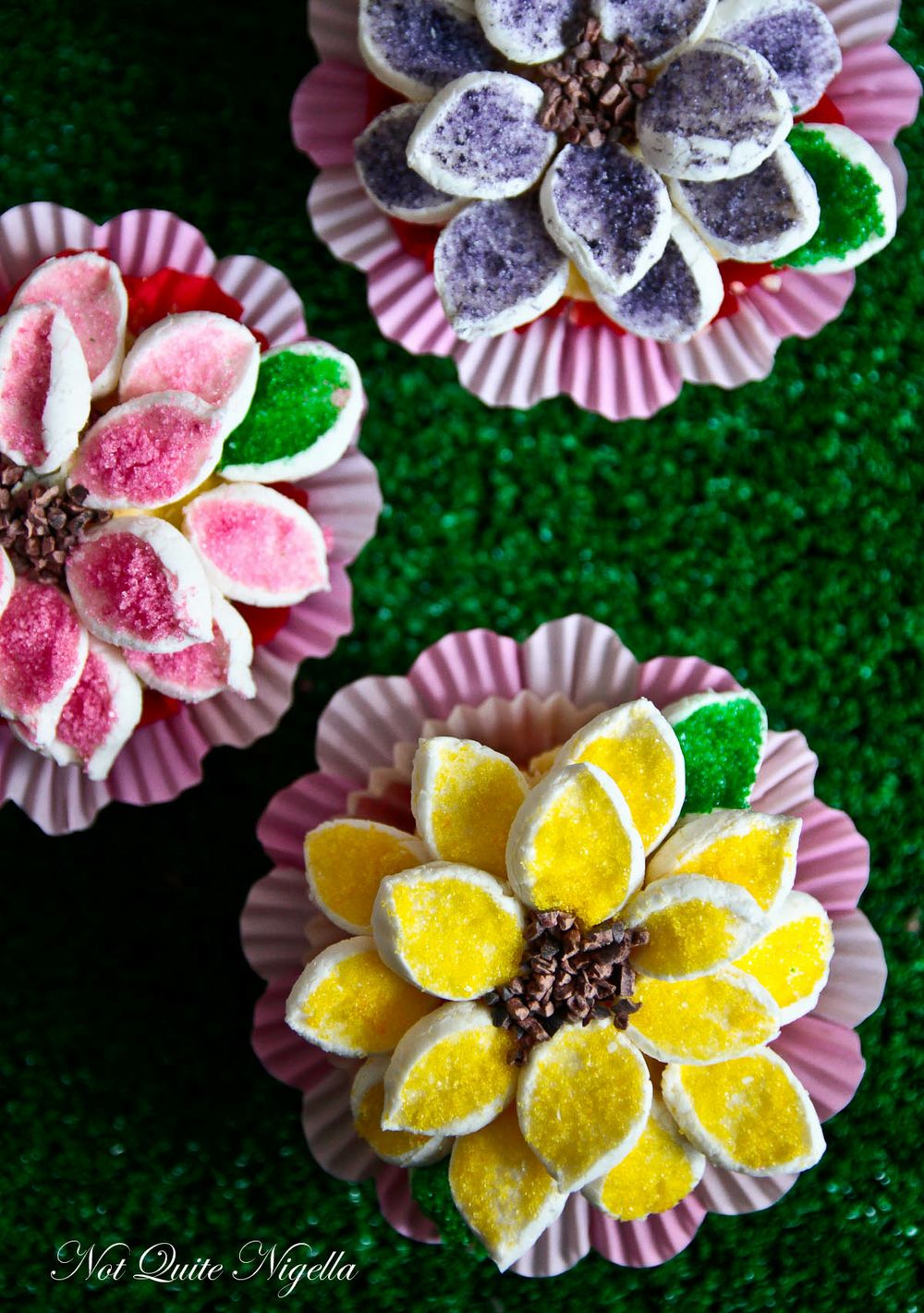 It turns out that the publisher that would have been right for my book was away on maternity leave. Her boss picked out up my manuscript during an acquisitions meeting. They wanted to fly my agent Sophie and I down to meet with them too as they are based in Melbourne. This was a first for both of us and I was excited but nervous. I had to impress them. This sounded like a job interview.

A few weeks later we found ourselves at the domestic terminal of Sydney airport. We had just arrived back from New Zealand tired but still on a high and the evening before, I figured out what I would make to impress them. I had seen a lemon meringue two layered fudge in Auckland. I had a reliable fudge recipe that used marshmallow to set it rather than the will of god and copious amounts of praying. I didn't have time to muck about as it was 9pm when we arrived at home and I had to get up at 6am. Mr NQN ever the hero, had gone to the shops to buy some white marshmallows. I was busy wielding the sugar thermometer and by 9:30pm I collapsed into bed hoping that the fudge had set. I was too exhausted to check.

The next morning I awoke and peered into the fridge cautiously as if a monster that attacked humans lived there. The fudge was sitting in the tray. I carefully lifted the paper out of the tray. It had set! I quickly bagged it up and tied a ribbon on it and Mr NQN dropped me off at the airport. I met Sophie at the gate and told her all about my plans to win them over with lemon meringue fudge. She looked at my oddly and then laughed.

She looked at me and laughed and explained that the meeting was for them to impress me. Not the other way around. Oh dear...here I was with my best lemon meringue fudge in a clearly desperate "please like me gesture" and I had gotten the brief wrong entirely. And that wouldn't be the first or last time either... 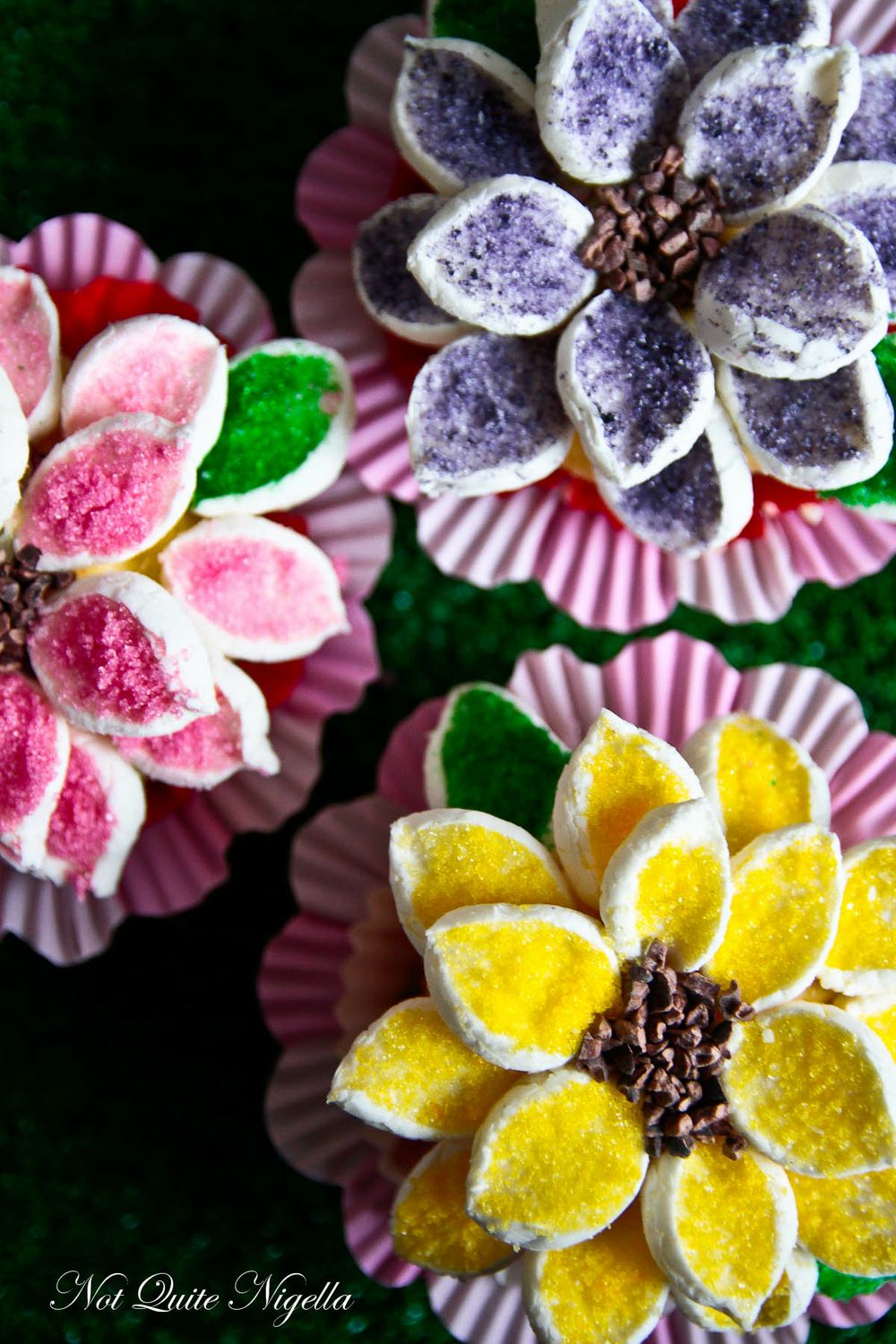 I met with three lovely people from Penguin at one of Melbourne's best restaurants. The talk centered on me and my plans for the book and I was impressed at how together they had their strategy and how clearly they saw me. They mentioned parallels with writers that I  love and I remember thinking to myself "Oh you get me!". They were bandying about talk show names and thought that I'd do well on the talk show circuit. I don't know if I would but I love to play pretend talk show at home. I'd like to think that if we ever had cable television I'd have my own show. Just me, a table, two chairs and a white curtain background and a guest and we'd take calls from viewers. No-one would watch us except perhaps when they were stoned, drunk or bored. Which would at least make for some interesting phone calls...

It was all a little bit surreal for me and I think I managed to hold my knife and fork properly and not embarrass myself. A counter offer came through shortly after from the other publisher and they had matched Penguin's offer and it was at that point that I had to choose between the publishers.

It was hard. If one of them would have been not right for me then it would have been easy. Both understood what I wanted to do and both were absolutely lovely. In the end, I went with Penguin. I felt terrible emailing the other publisher to let her know. I know the proper etiquette would have been to call but I am hopeless at these sorts of things and an email was the easy way out. She was graceful and sweet about it.

What I didn't realise was that contracts take a while to get there but when an offer is made to the agent via email, it is legally binding. But I came from the world of advertising where all sorts of flying unicorns and fairies were promised by email but nothing was real until it was signed so I didn't feel quite safe telling my parents until I had signed a contract. Meanwhile, Dear Reader, I started work on the book!" 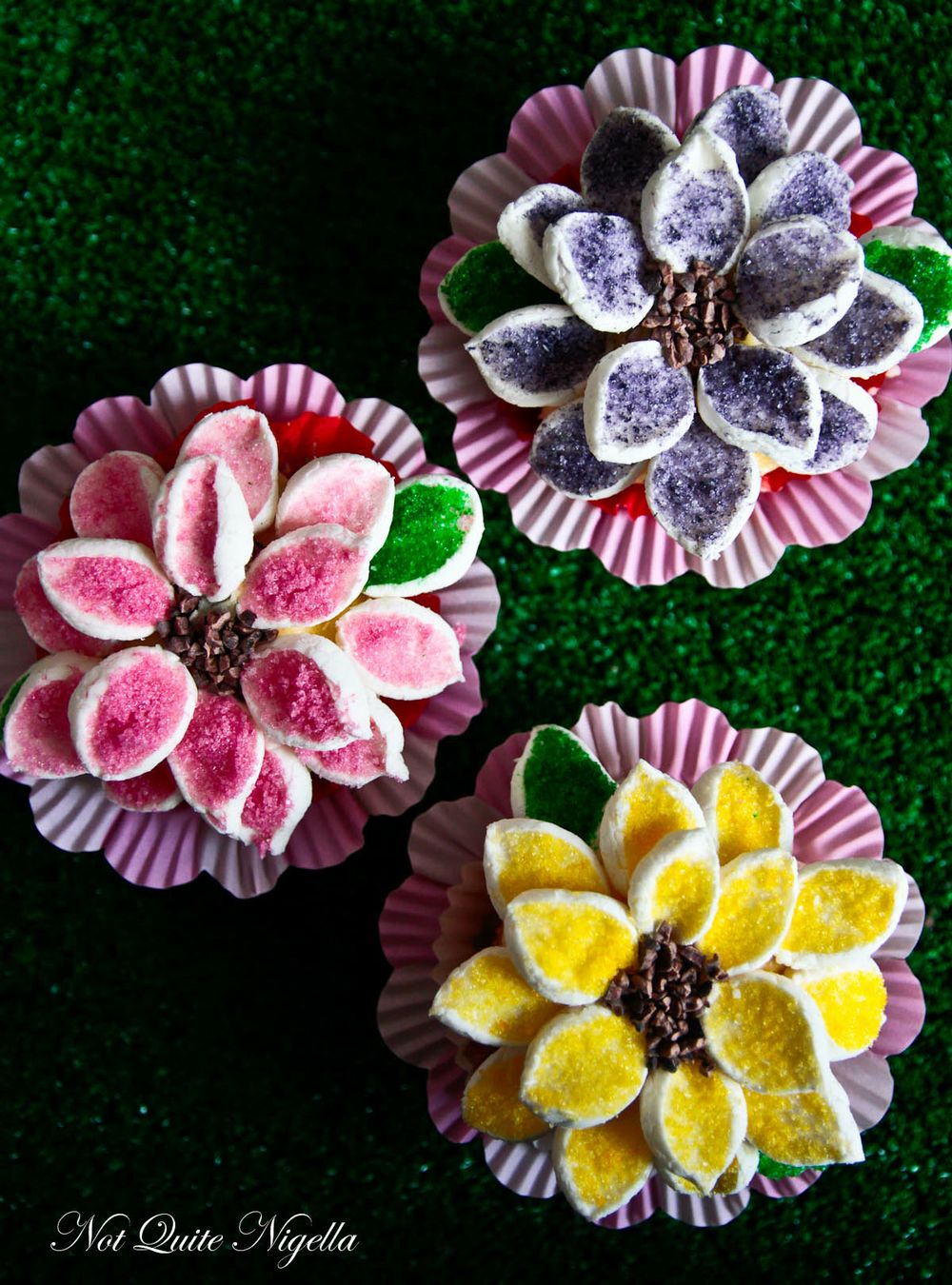 The lemon meringue "please like me fudge" is in the book but one lesson that I learned from that escapade is to always have marshmallows in your pantry. They're incredibly useful little things and I use them not so much to eat by themselves (I prefer fresh marshmallows for eating) but for decorating, making fudge or using as a sticky goo to adhere sweets together or as a cupcake icing. And it was on the spur of the moment that I decided to make these cupcakes and I was thankful for my emergency stash of marshmallows.

Long time reader and now blogger Joanne sent me these in an email from a site called Fancy Flours and I was instantly smitten. Not only were the blossom cupcakes beautiful but the flowers were absolutely doable as I had made something similar years back. I saved it for a day when I wasn't in a hurry and dashing back and forth and had time and patience to make sanding sugar and attach each petal to each cupcake. It's actually quite a simple process and once you have a whole lot of marshmallows cut up, it's not too time consuming. The cakes themselves are simple espresso flavour cupcakes topped with espresso buttercream. This was to balance out the exaggerated sweetness of the marshmallows on top crusted with sugar.

So tell me Dear Reader, what do you always have in your fridge or pantry? Apart from marshmallows, I always have flour, butter and lemons. And if you had to choose a dish to impress a potential publisher, what would it be? 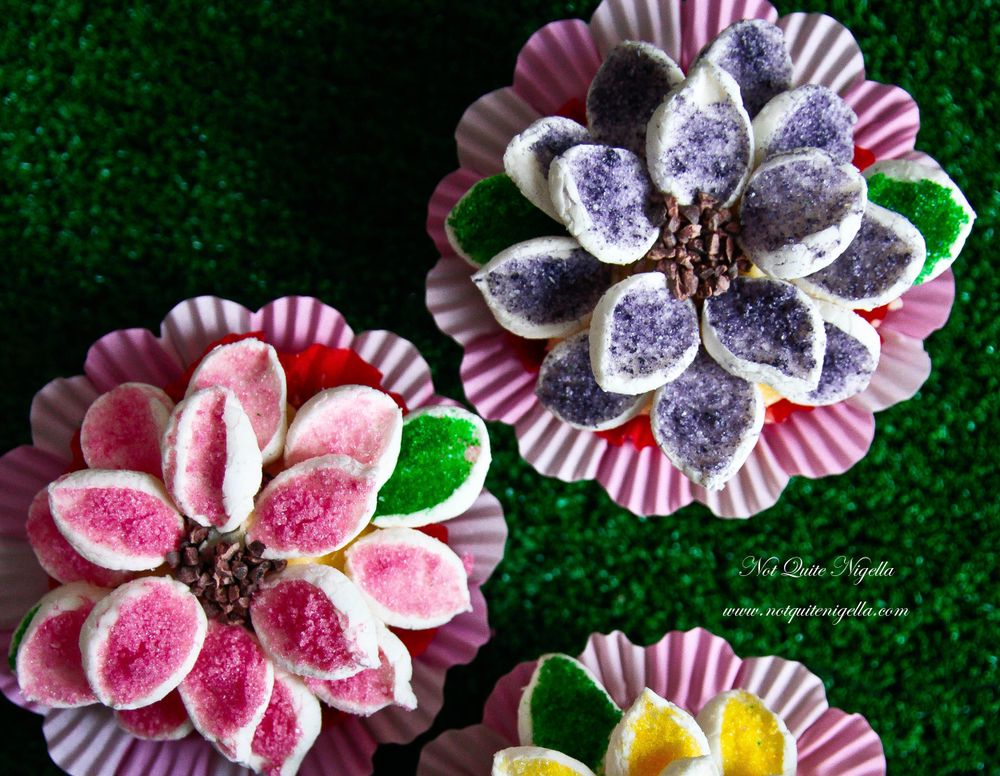 Step 2 - Sift the flour into a medium bowl, then add a pinch of salt, caster sugar and coffee. In a jug, combine the vegetable oil, egg, buttermilk. Add to the dry mixture and stir to just combine. Spoon into prepared cupcake cases until 2/3 or 3/4 full and bake for 20 minutes or until a skewer inserted comes out clean. Remove from the oven and set aside to cool slightly.

Step 3 - Beat butter in a small bowl with electric mixer until light and fluffy. Stir milk and coffee together until smooth. Add in sifted icing sugar and coffee milk in two batches until fluffy. Spread over each cupcake with an angled spatula just before assembling (you don't want the icing to set hard as you will use it to adhere the marshmallows). Reserve a little icing to adhere any hard to stick pieces. 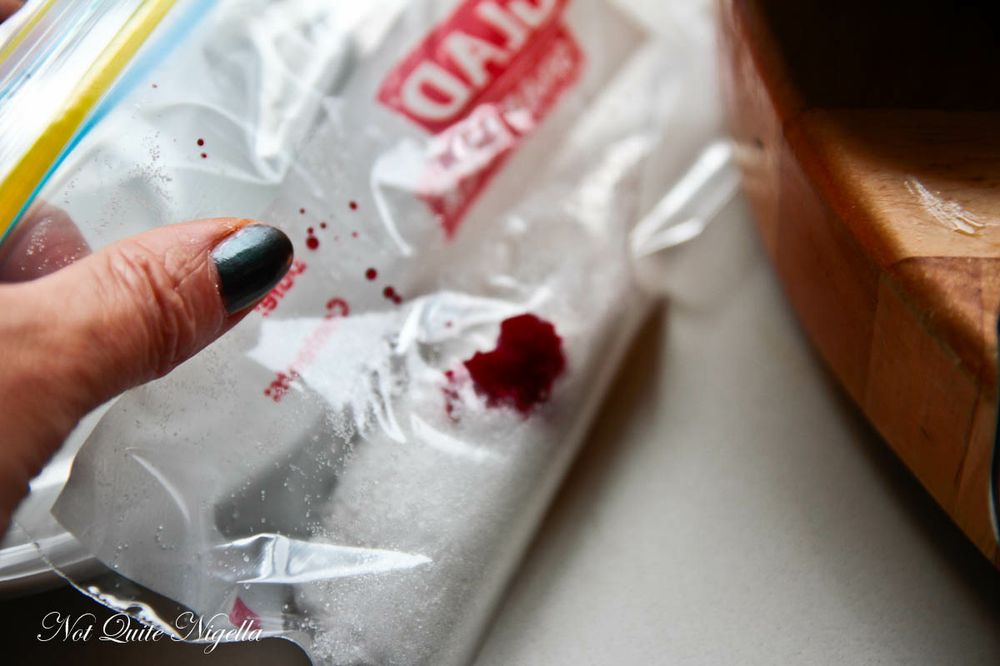 Step 4 - Make the sanding sugar by adding a drop or two of liquid food colouring to 2 tablespoons of white sugar in a ziplock bag. Seal shut and shake until colour is evenly distributed. Make a green sanding sugar as well as any other colours that you want to make the blossoms. Empty each colour onto a separate small plate. 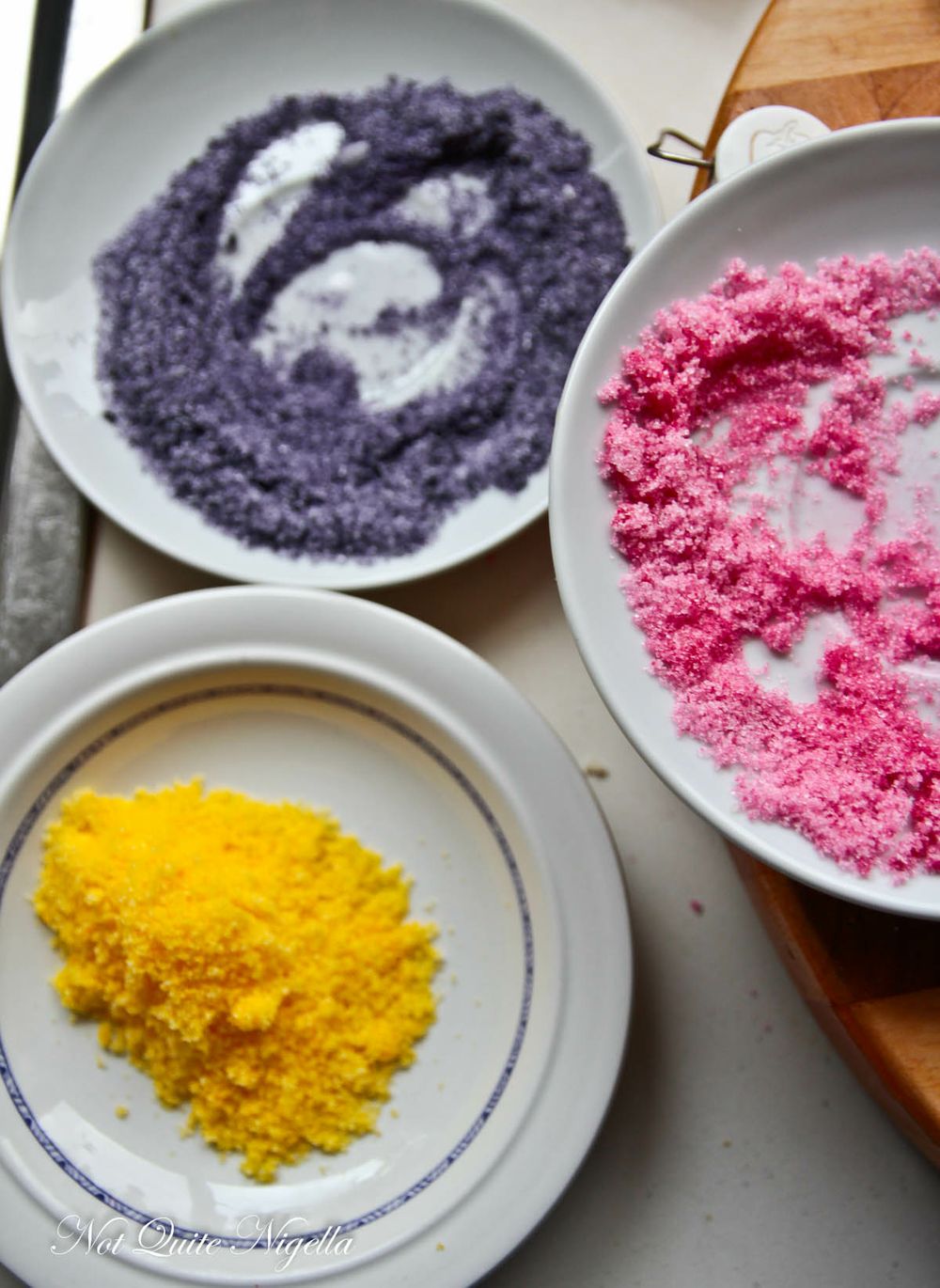 Step 5 - Make the leaves first. Cut each marshmallow in half diagonally and dip the sticky part into the green sanding sugar. Place these on the outer edge of the cupcake on opposite sides sugar side up. 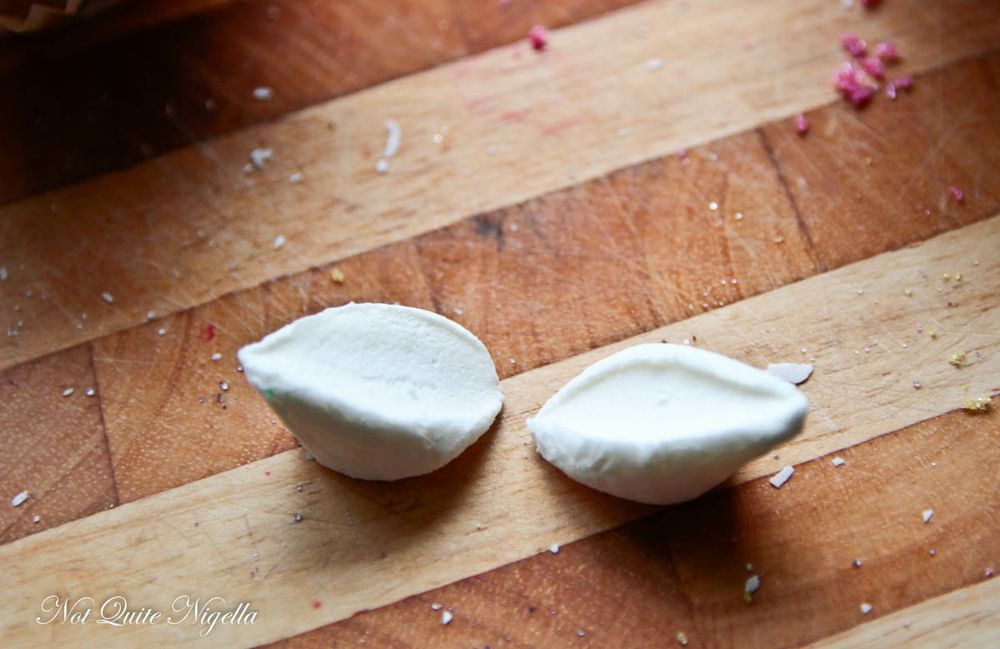 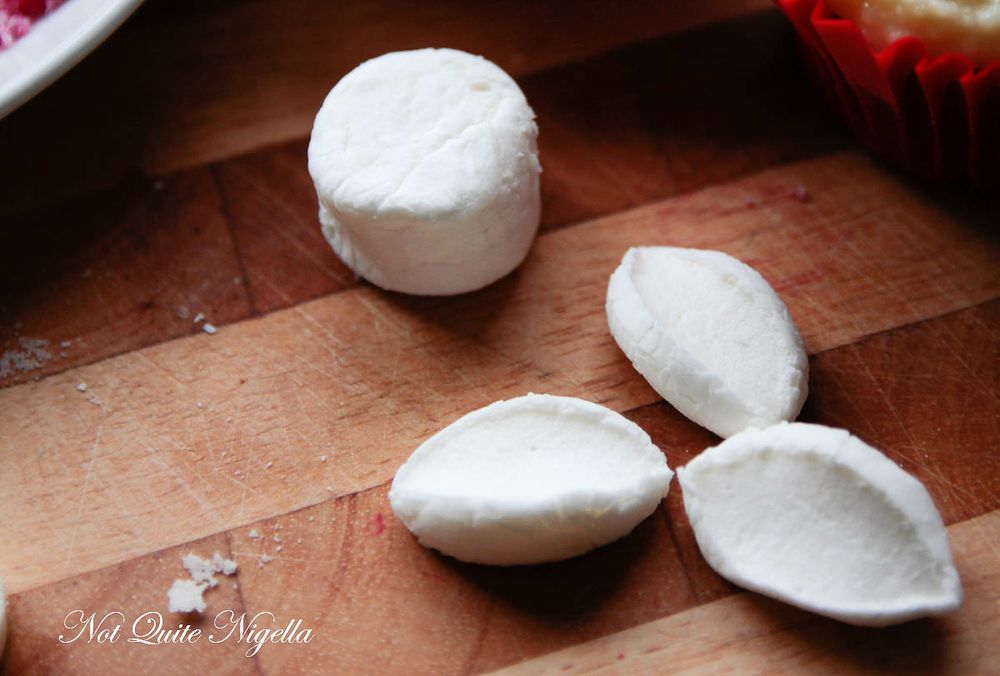 Step 6 - Make the flower petals by cutting the marshmallows into three (you want them smaller than the leaves) and slightly pinch the ends with your fingers. Then dip the sticky part into the coloured sugar and affix them to cupcake going from the outside to the centre. Once you have added all of the petals, fill the centre with cacao nibs. 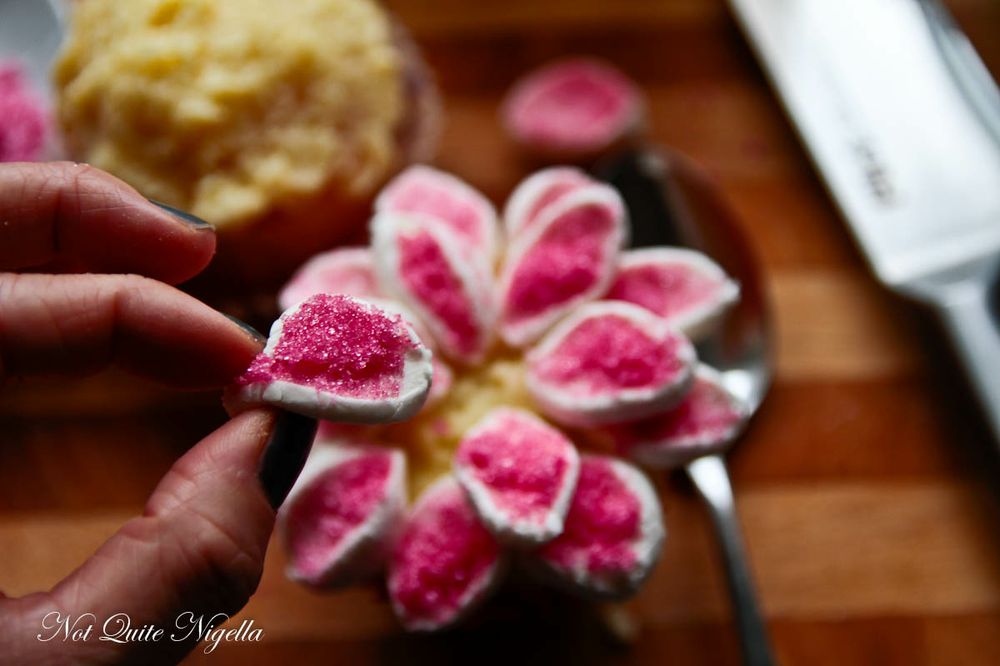 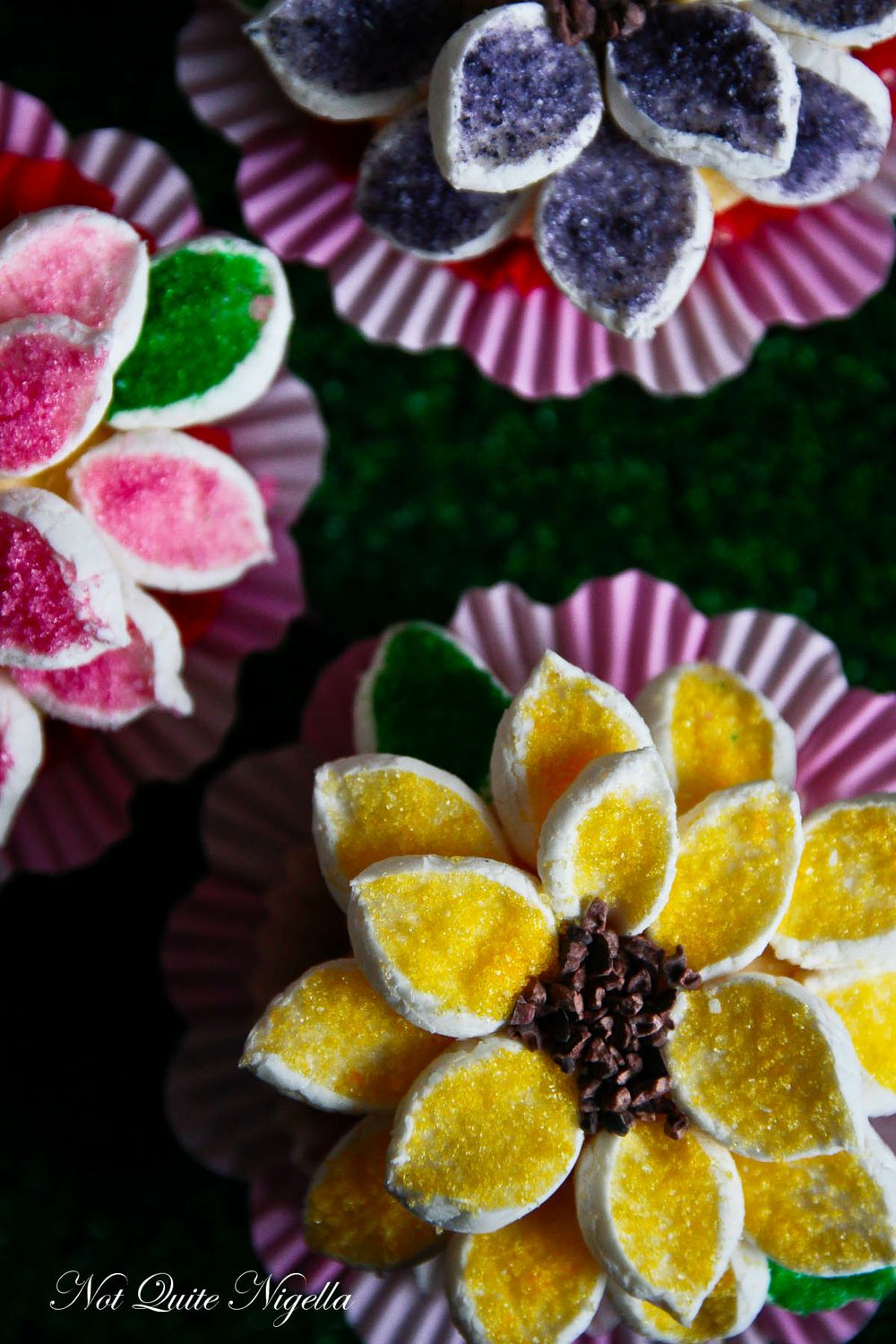