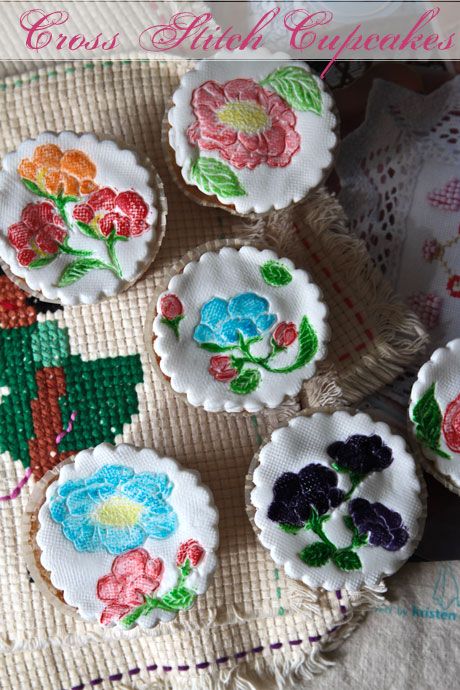 There are certain things that you remember from childhood. Seeing your friend's mother naked is one of them.

I should explain. My parents were and are very conservative. Particularly on some topics although on others, they don't really care. But getting naked was not something that we as a family did (unlike Mr NQN's family whose photo album has page after page of naked bottoms). My mother was a strict, knitting, cross stitching mother  who cooked food that my father liked and I thought all parents were like them. 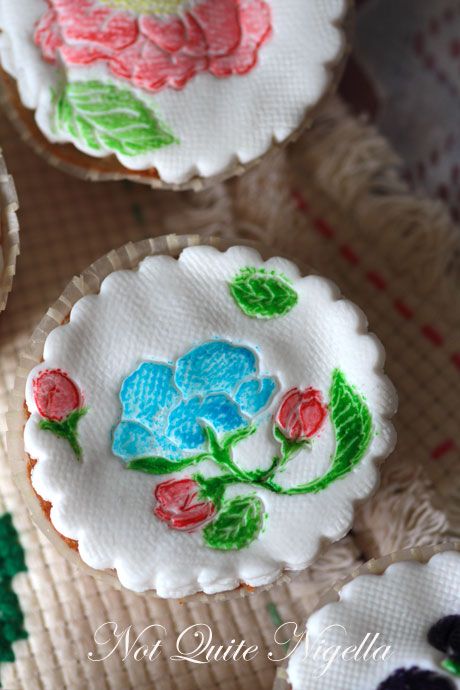 I remember when I would visit a friend Erica's place. Mother would say that Erica's mum was "alternative" or "European"but as for me, she just seemed cool. I enjoyed being over there because Erica was allowed to do pretty much anything that she liked. Erica could eat donuts. Erica could play wherever she wanted. Erica could eat ice cream (are you sensing a food theme?). Until one day, we were playing and the electricity went out and we went squealing to her mother. She was in the bathroom and stepped out of the shower stark naked in front of us.

I had my first encounter with what I now know to be hippies. 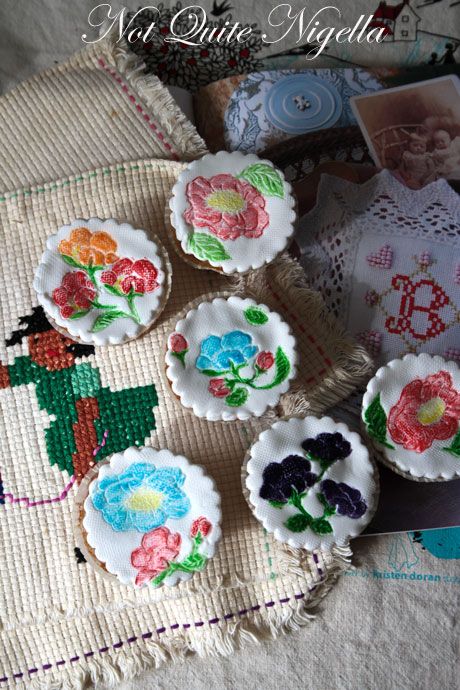 Erica seemed nonplussed, as if she had seen her mother like this many a time. Her mother carried on a conversation as if she were talking to the bank teller about getting some money out for the grocery shopping while I freaked out silently at the fact that Mrs K. was naked in front of me. My eyes fixed on the plain ceiling trying to burn out the image that I just saw. Erica must have sensed my discomfort because she dragged me away and Mrs K. never got naked in front of us again. 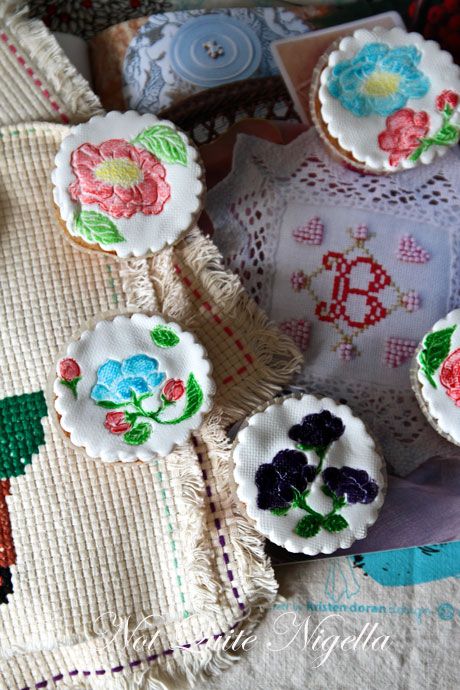 That day I think I was actually glad that my parents weren't that sort. I'm still not really into random displays of nudity (ok True Blood is an exception and those scenes are crucial to the plot! ;) ) but alas I didn't really follow my mother and get into things like cross stitching either. It required patience and dexterity that I didn't have. But it doesn't stop me from making cupcakes inspired by cross stitching.

The idea came to me while I was sitting on a chair covered with patterned material. After sitting there for a while my lower arm looked as though it was cross stitched with the pattern and I thought that perhaps I could do the same for a cupcake (my first instinct with anything is to cookie-fy or cupcake-ify it). I gave it a go and tried a few different methods before finally settling on one that I thought was an approximation.

And there were no naked hippies involved...

So tell me Dear Reader, were your parents strict and conservative or did you have free thinking permissable parents? Or something in between? And what is your policy on random nudity? ;) 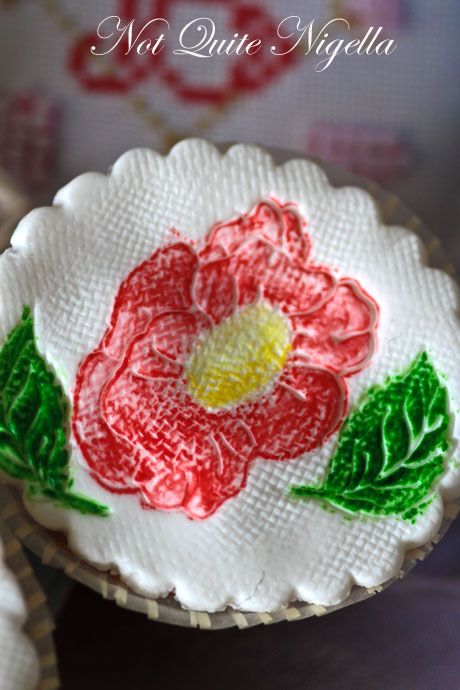 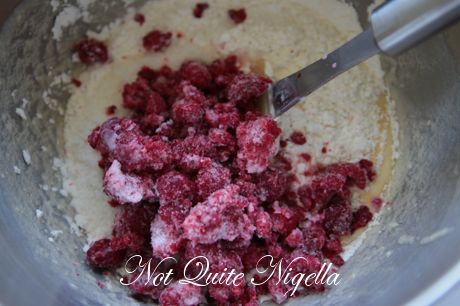 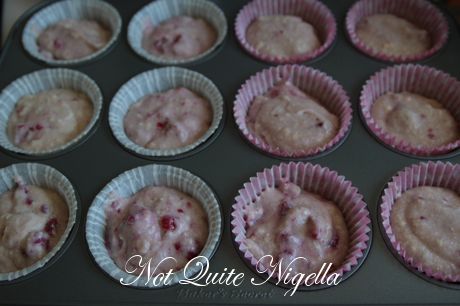 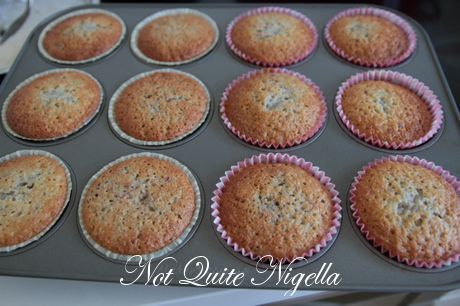 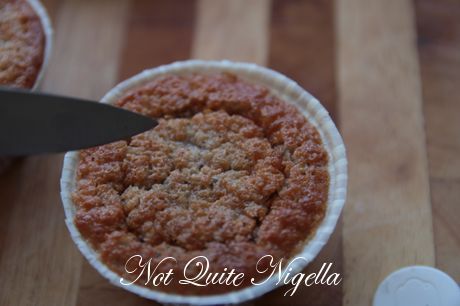 Step 3 - Bake for 20-25 minutes. Turn cakes onto wire rack to cool. Cut out a cone in the centre of the cupcakes and then fill them with raspberry jam and then place the cone back in. 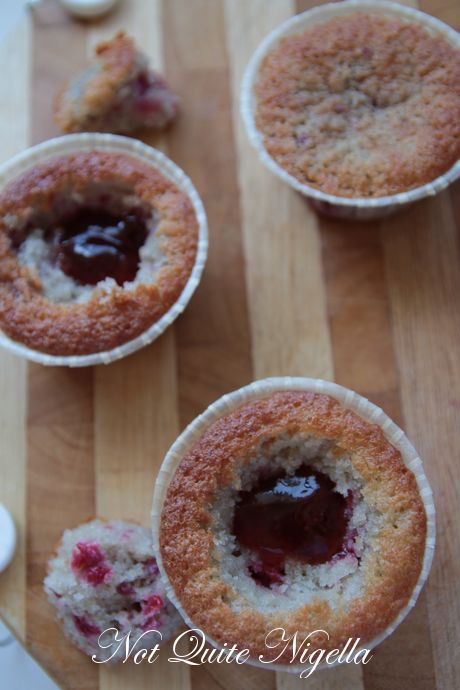 Step 4 - When cool, roll out white fondant onto a non stick surface and cut out circles. Press the stamps into the fondant and then press firmly against the sieve trying not to spread the fondant out too much but you want to indent the cross hatch pattern well-the deeper the better the cross stitch look. 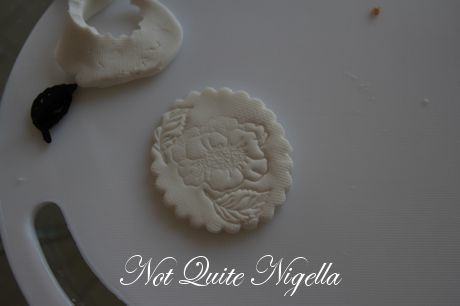 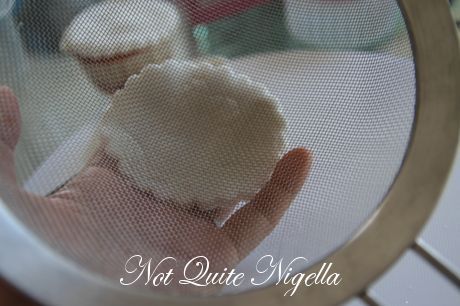 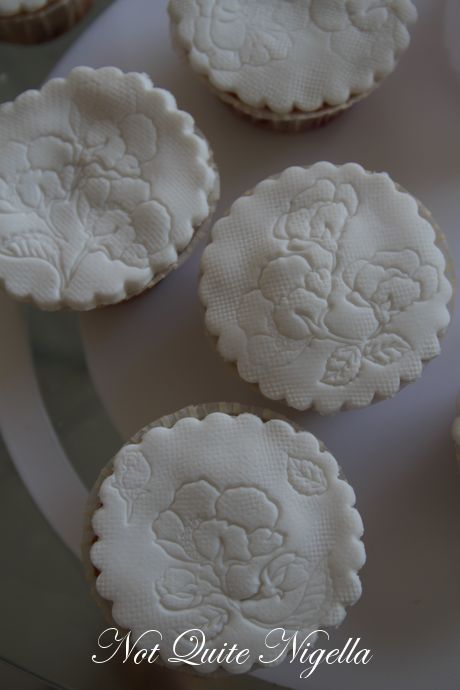 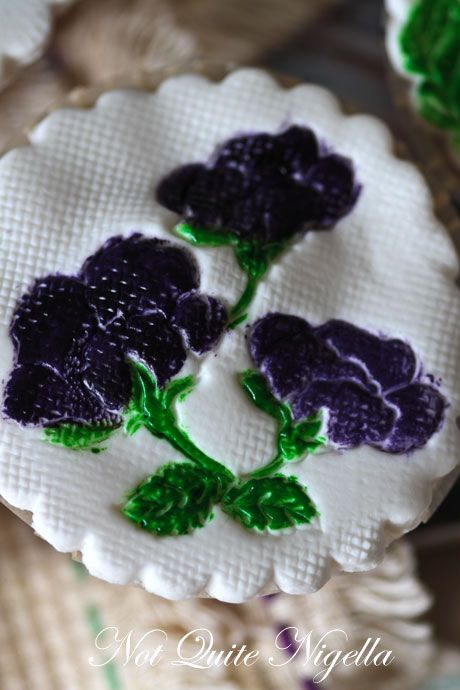 Step 5 - Now you have to leave this to dry for a few hours to a day if you are using edible textas. Textas tend not to work so well on soft fondant as they drag the fondant. If you are using colouring gels (not a liquid) you should be able to paint these sooner. Just get a few ramekins and a few small paintbrushes and place a little of the gel in each-do not dilute or it will get watery and it will run into the cracks-you want the cracks showing as that looks like cross stitch. Gently paint over the patterns with the paintbrush taking care not to paint too deeply. Allow to dry. If you are using edible textas do the same once it is dry. 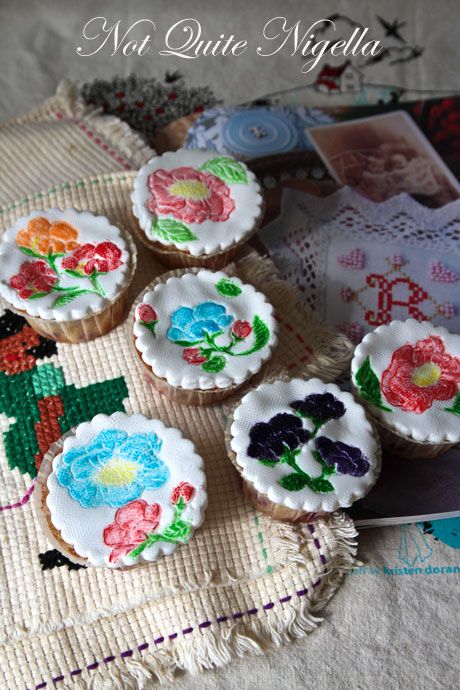