Pretty Hydrangea Cupcakes for Mother's Day and a Tutorial! 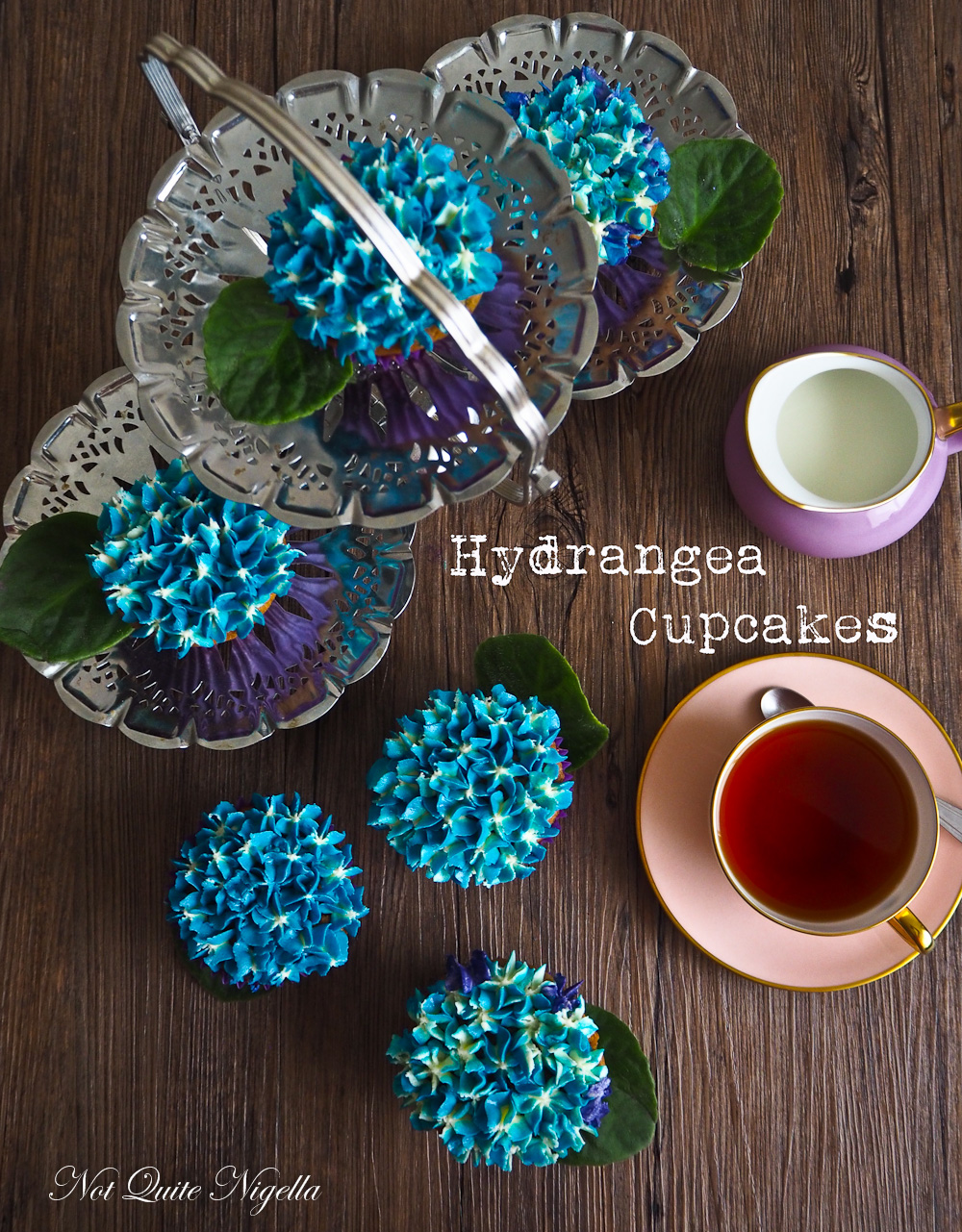 *This pretty as a picture or indeed pretty as a flower technique is one of the very easiest you could ever come across. For those that are newish to cupcake or cake decorating this is a great cupcake to instill confidence and produce fantastic results. The "magic" here is all in filling the piping bag with two colours of buttercream, one around the outside of the bag and one in the centre to produce this natural hydrangea blossom cupcake. Perfect for Mother's Day or an afternoon tea! *

When I was in primary school, we were asked to bring along some things to school for Show and Tell. My mother handed me an envelope and told me that it contained some fish scales. They were from our next door neighbour at the time who was a keen fisherman. Every weekend he would take out his boat and bring back some fish. That weekend he caught a couple of barramundi (a large white fleshed fish).

When the time rolled around to Show and Tell I opened up the envelope in my lap and took out the scales. They were large and translucent and reminded me of circles cut out in iridescent wax paper. I put my hand up excited at having these enormous fish scales and my teacher beckoned me to take them to the front of the class. I held some up in my palm before taking one single scale in between my thumb and forefinger. It glistened in the afternoon sunlight.

"These are fish scales," I said.

My teacher cleared her throat. "Now Lorraine, that's not very nice to make things up," she said.

Can you hear the screech of the tyres as my mind ground to a halt? 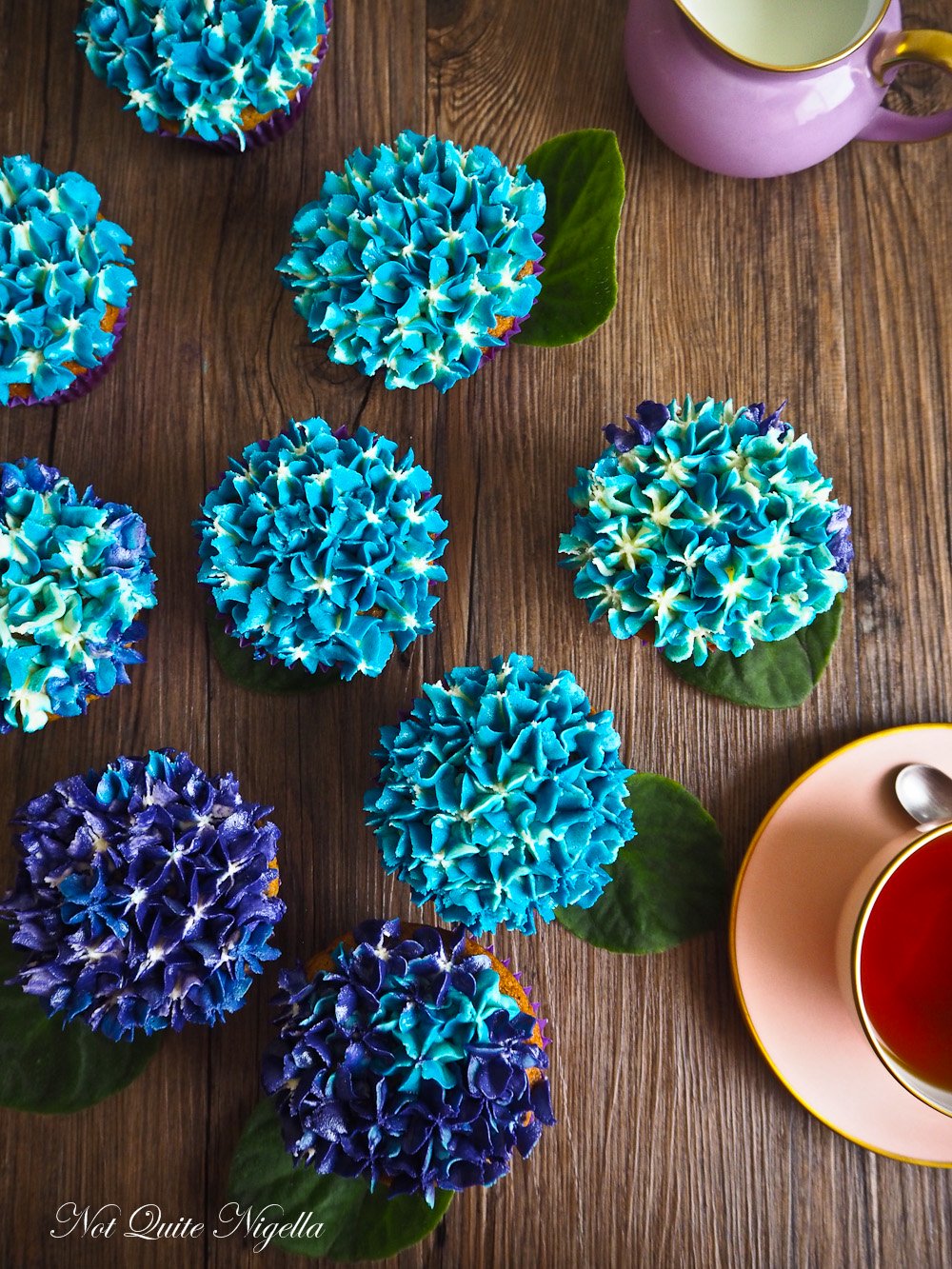 "They're not fish scales, they're paper," she said sternly.

"But...they are! Our neighbour Mr Wong caught a fish!" I said.

"No Lorraine, they're not, sit down now," she said firmly. Mortified, I made the walk of shame back to my seat. I was so upset that when I got home I threw away the envelope of fish scales and wailed at my mother. "Nobody believed me! These aren't scales! I hate school!!".

My mother sighed and carried on with her sewing and tsked out of the corner of her mouth at me. I asked her a few years ago about the scales and she didn't really remember them but the memory for me was vivid. I often have an odd memory of people. Like one of the things I remember about Madonna was that she once had a tantrum about hydrangeas. (Go on lovelies, google "Madonna hydrangea incident" ;)). A fan at the Venice film festival gave her one during a press conference and under her breath but on microphone she said, "I absolutely loathe hydrangeas." She then added, "He obviously doesn't know that." 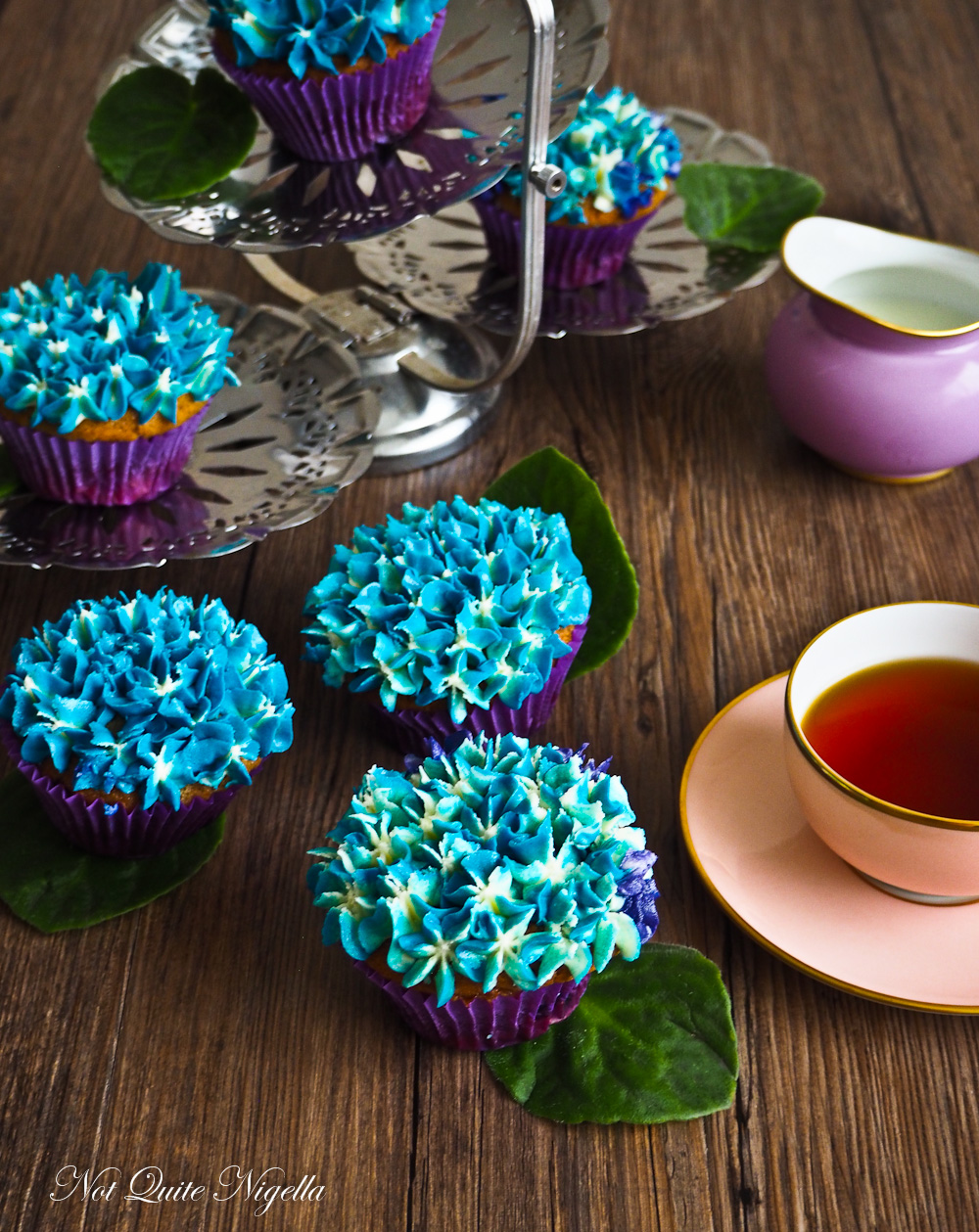 Oh Mads, I have to disagree with you on hydrangeas. I absolutely love these blossoms, so full and bountiful with almost sombre-ish tones of blues and purples. Yet I find them happy flowers and almost had a hydrangea bouquet for my wedding bouquet - they go so well with vintage style dresses.

I know I tend to say that things are easy and some of you might give me a stern side eye for that (although thankfully you've been very polite about it) but I have to say that this is one of the easiest techniques for icing I have ever done. You only need a 2D tip and three colours of buttercream icing (or two if you prefer it simpler). It's really just a matter of putting the blue or purple buttercream on the outside of the bag and white in the centre. The rest is so simple it's such an absolute joy to make these.

If you don't believe me, I've even made a quick video on how to make these! And feel free to subscribe and like the videos. I'm a bit needy that way ;)

The cupcake part is just as important as the decoration and for these I made a velvet buttery soft blueberry, lemon and cream cupcake. I made them ahead of time and froze them and just defrosted and iced them when I needed them. Which for me will be Mother's Day this year. It's hard with so many people and so many families so compromise is definitely the keyword needed. We are going over to Tai's sister's apartment with my parents and Mr NQN's mother and family and they'll all do a present exchange then and some afternoon tea.

And hopefully no tantrums! ;)

So tell me Dear Reader, if you're a mum, how do you handle tantrums? When is the last time you lost it and what was it over? And what is the flower that you love and is there one that you loathe? What are your plans for Mother's Day this year? 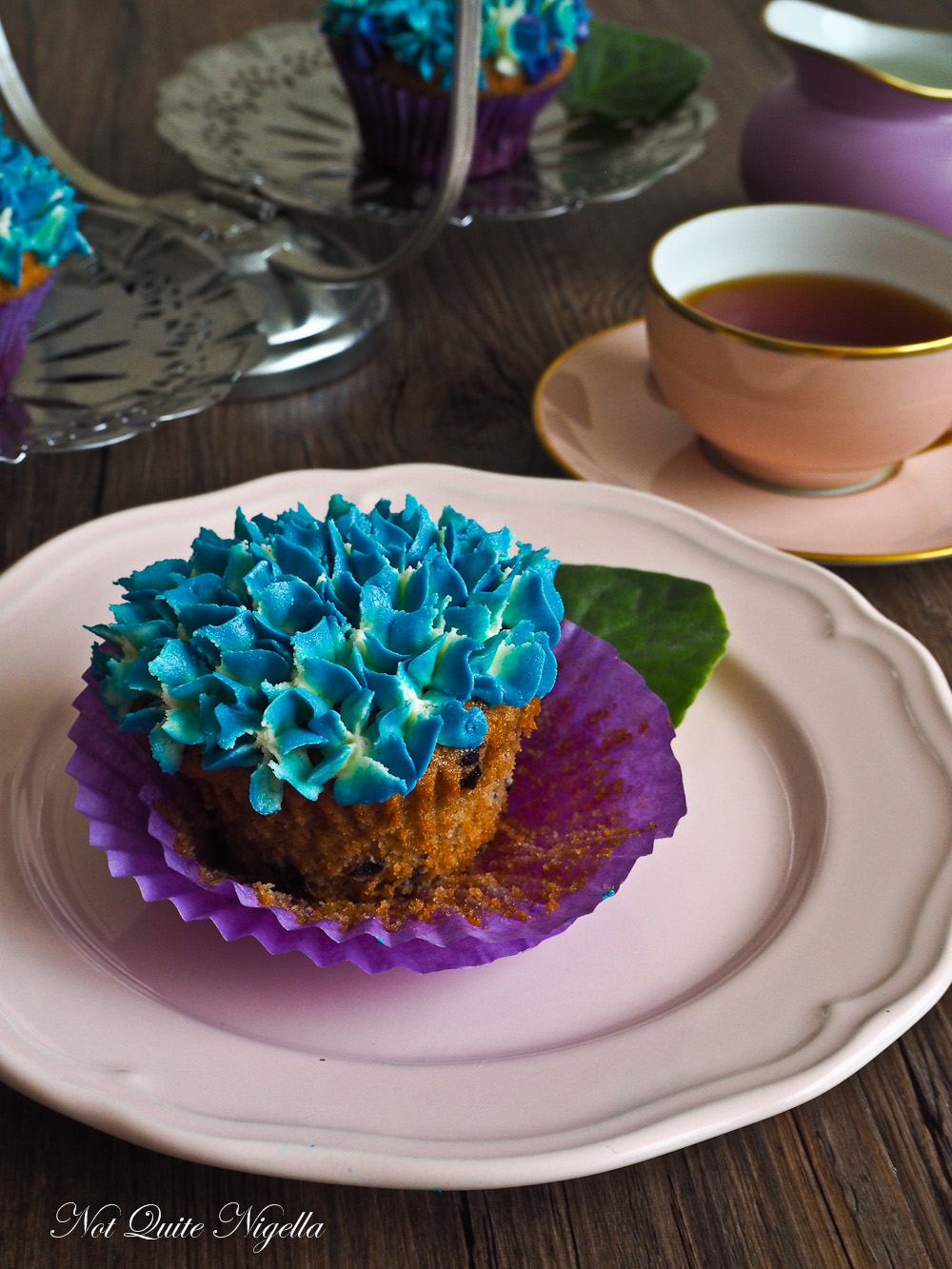 *To make 2 cups of cake flour, place 4 tablespoons cornstarch in a 2 cup measuring jug and fill to 2 cup level with plain all purpose flour.

Step 1 - Preheat oven to 160C/320F. Line a muffing tray with liners. Beat the butter and sugar for 3-4 minutes until pale and fluffy. Beat in eggs one at a time until combined. Mix the cream and the lemon juice and zest together. Whisk the flour, baking powder and bicarb together. 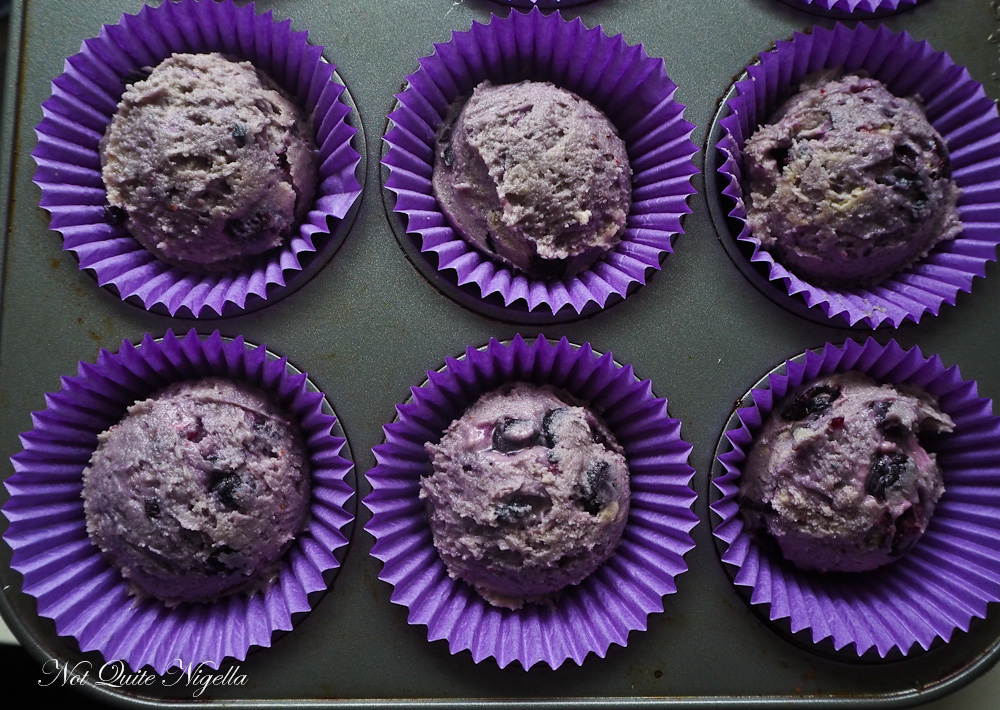 Step 2 - Fold in the flour in two lots alternating with the cream and lemons until just combined. Add the blueberries and mix until evenly dispersed. Use an ice cream scoop to place into the cupcake liners and bake for 30-35 minutes or until a skewer inserted into the centre comes out clean. Allow to cool completely.

Step 3 - Whisk the butter until smooth and then on low speed add the icing sugar, milk and vanilla and whisk until light and fluffy. Divide the mixture into plain, blue and violet. Take a 2D tip and cut off the piping bag to fit it. 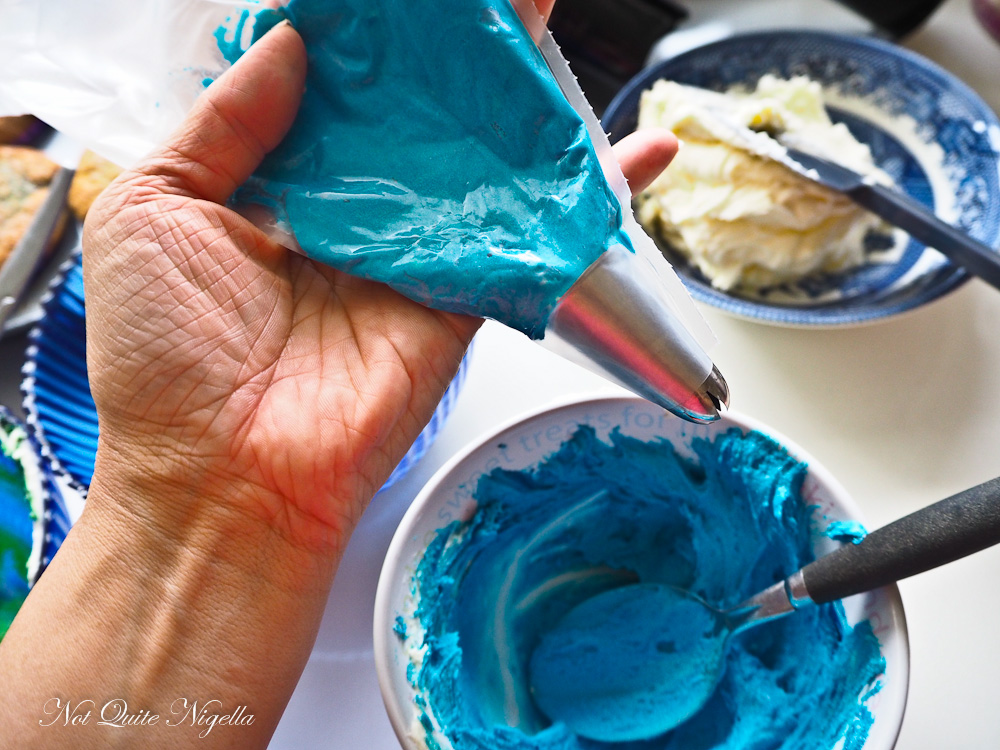 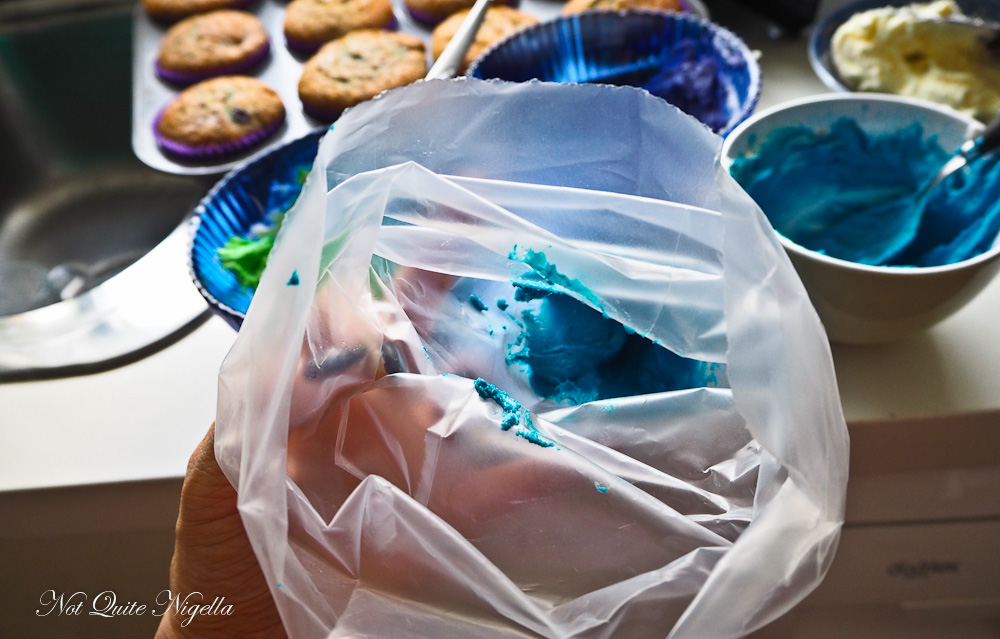 Making a hole in the centre for the white icing 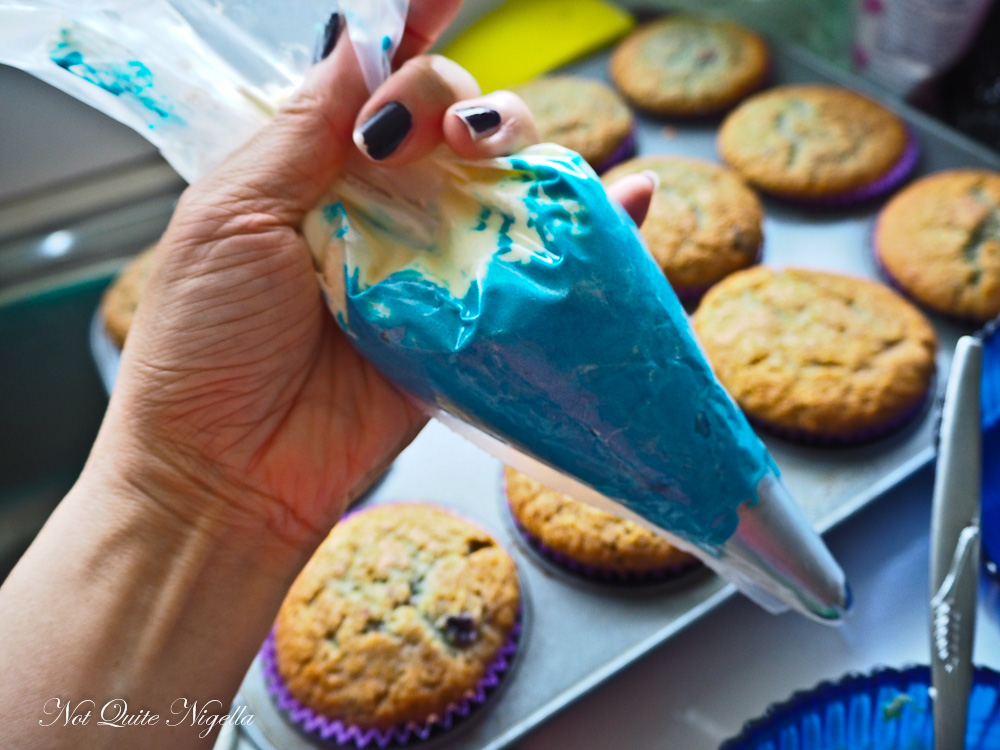 Twist the piping bag to seal

Step 4 - Take a scoop of the blue buttercream and place it deep into the bag. Squish it around so that it gets on all of the sides. Then take a spoon or spatula and open up a hole in the centre making sure to have the blue on all of the sides. Spoon some white buttercream in the centre and squeeze it shut and twist. The first few "squirts" will be all blue but then the correct white centered petals will come out. Cover all of the cupcakes with this-you will need to fill a new bag and you can also fill one with purple and add some purple petals as hydragneas are a combination or blue, purple and white. 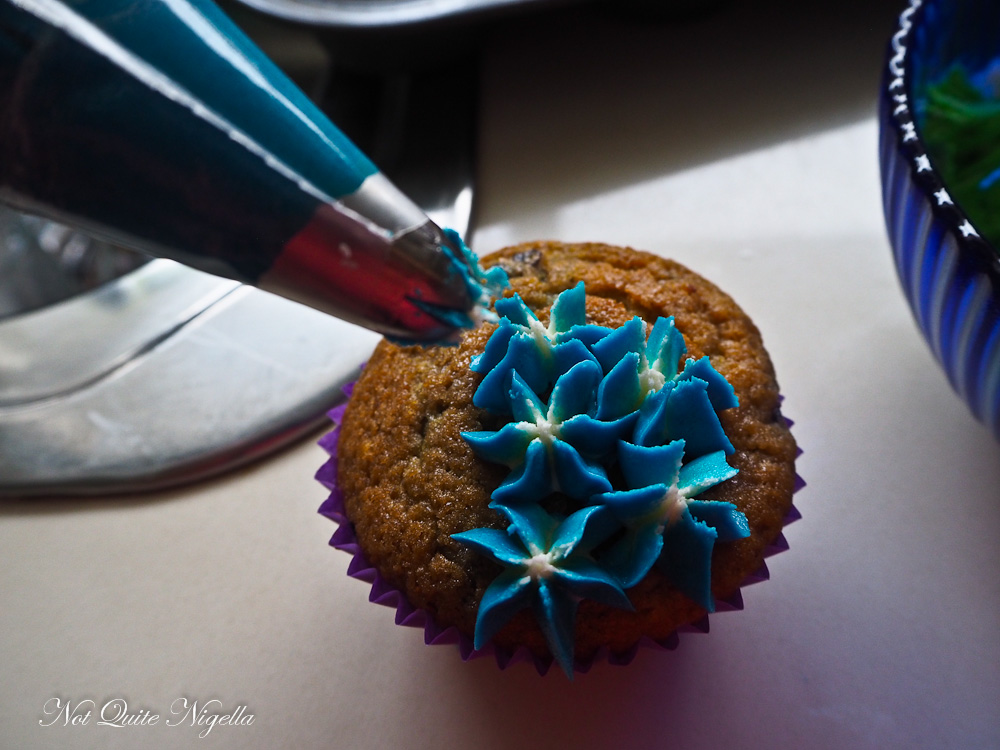