The Secret Life Of Gnomes Cupcakes 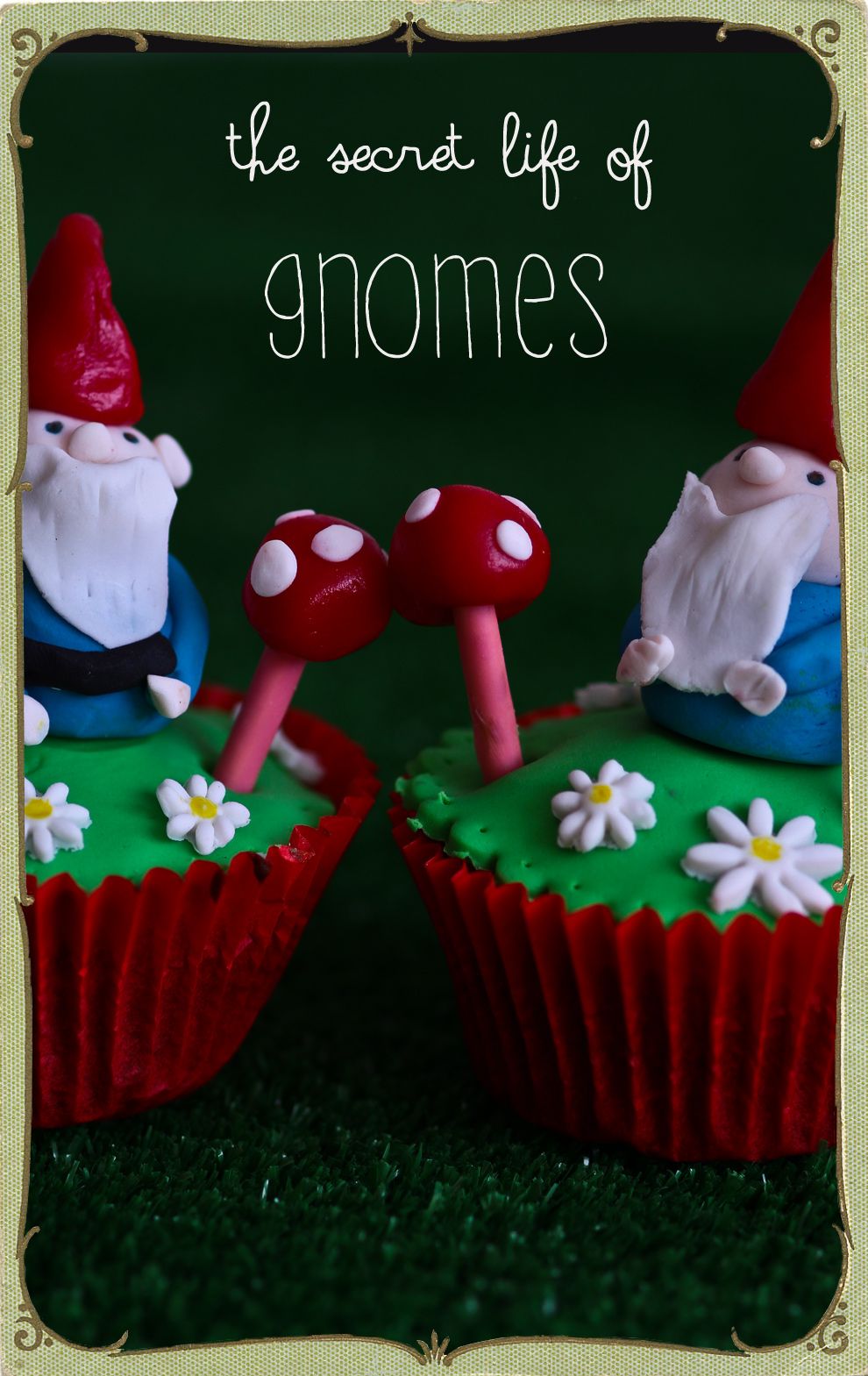 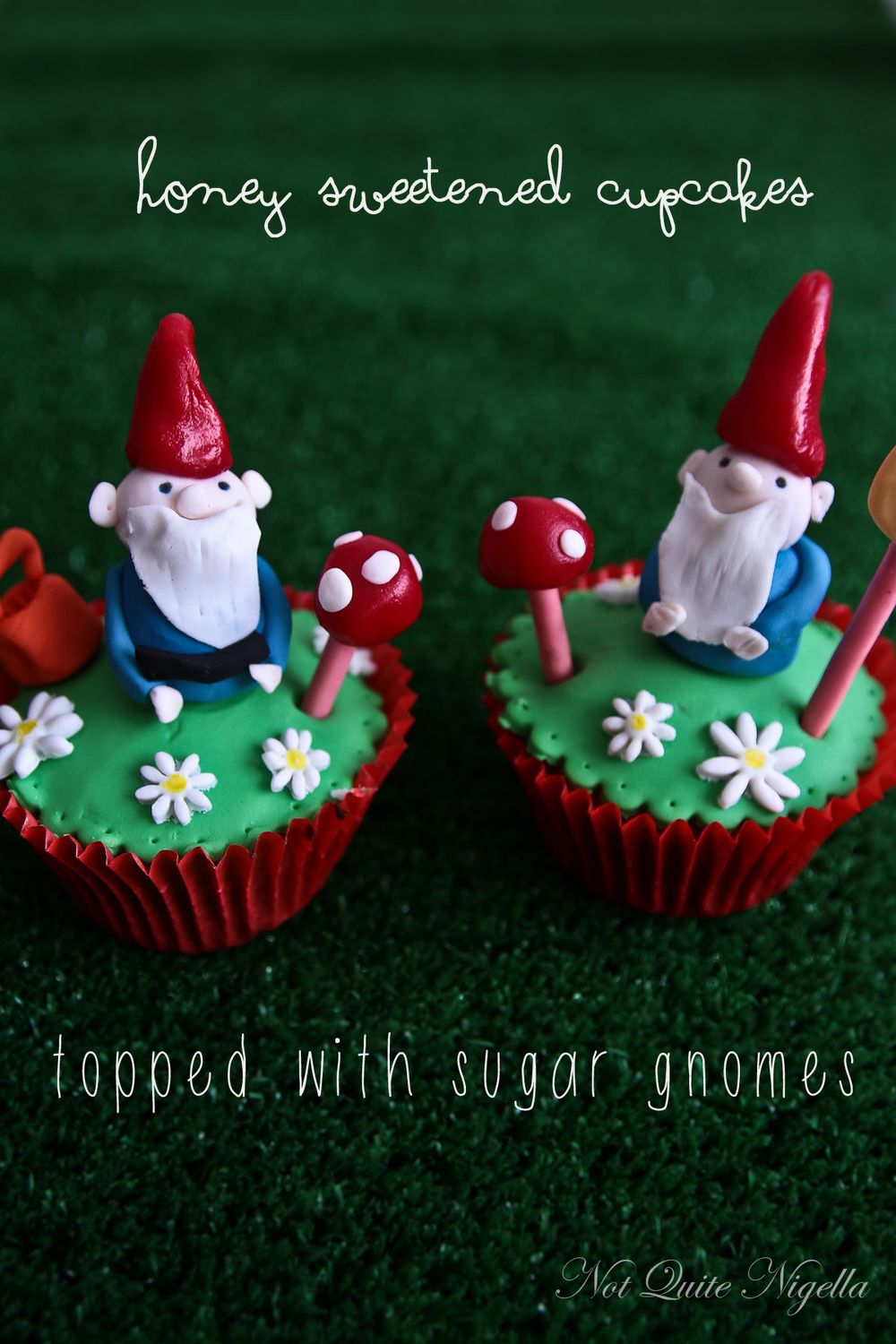 As a child that was never allowed dessert (oh how that has come 180 degrees since to an adult that cannot go without!), I was often found in the garden making chocolate mud cake using mud from the garden. I had a round yellow watering can and I would sit in the garden with a shovel and a watering can and I got it in my head that this delicious concoction would be assembled through shovelling wet mud into this watering can which was my baking tin.

My mother with her colourful rose garden would never allow gnomes in the garden but everyone else had them and instead, I imagined their gnomes, these strange little men, not that far off my size would go from garden to garden only freezing in place when someone said "Simon says stop!". They were so quick that I would only see them in the corner of my eye as they were fleeing. 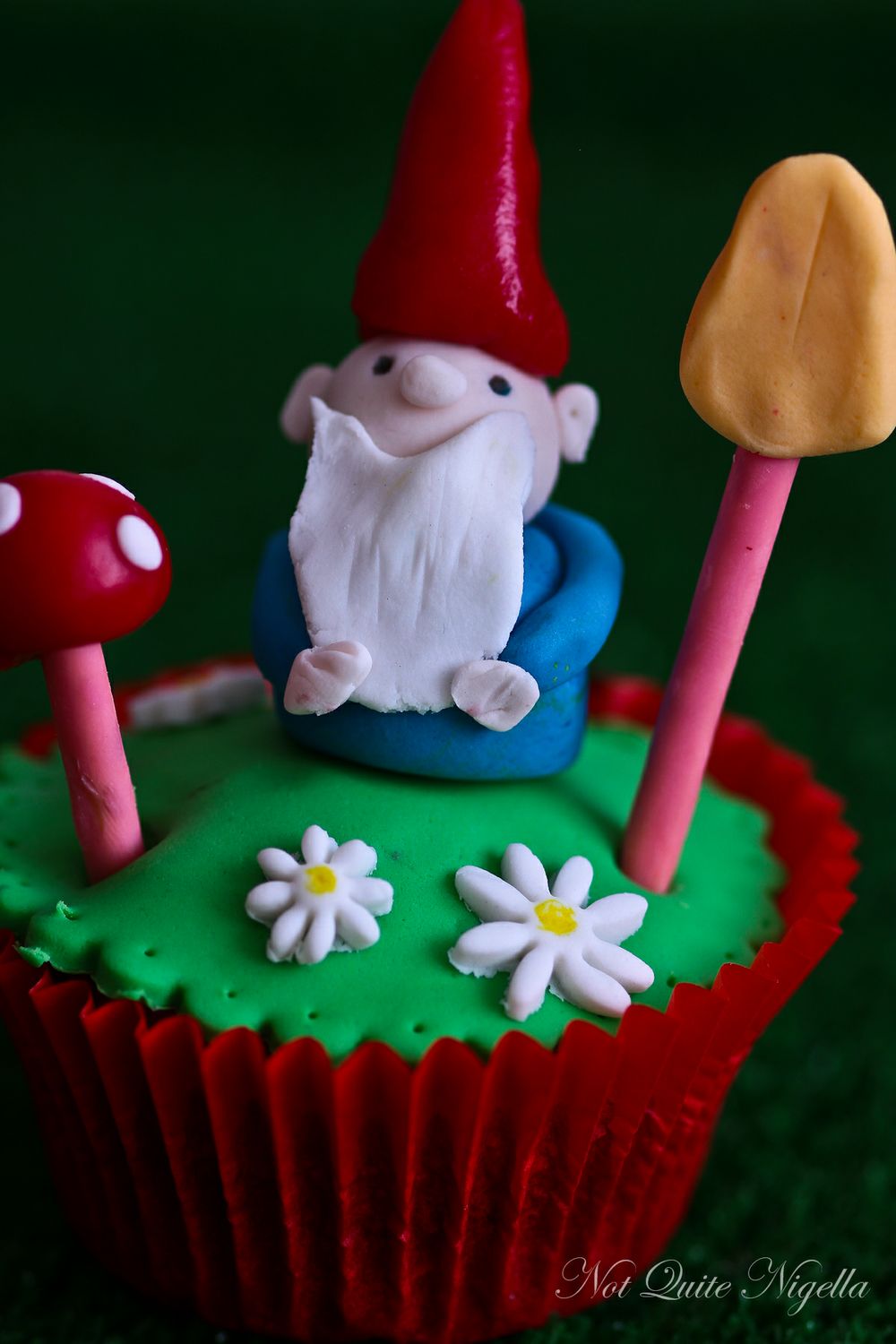 Then one day, my shovel unearthed something that I didn't want to find: the fattest, most squirming caterpillar. Apart from ladybirds, I was not fond of insects and other creatures of the same ilk. I dropped my shovel, and ran away as fast as my chubby little legs would carry me away from it. The chocolate mud pie was abandoned, the can was turned over and the mud slowly oozed out onto the driveway. And as I ran away, I felt as though there were gnomes behind me and I couldn't help but look back to see if I could see them in their secret game of Simon Says. I was convinced that there were six running after me shouting "Run, Lorraine run! It's coming for you!" 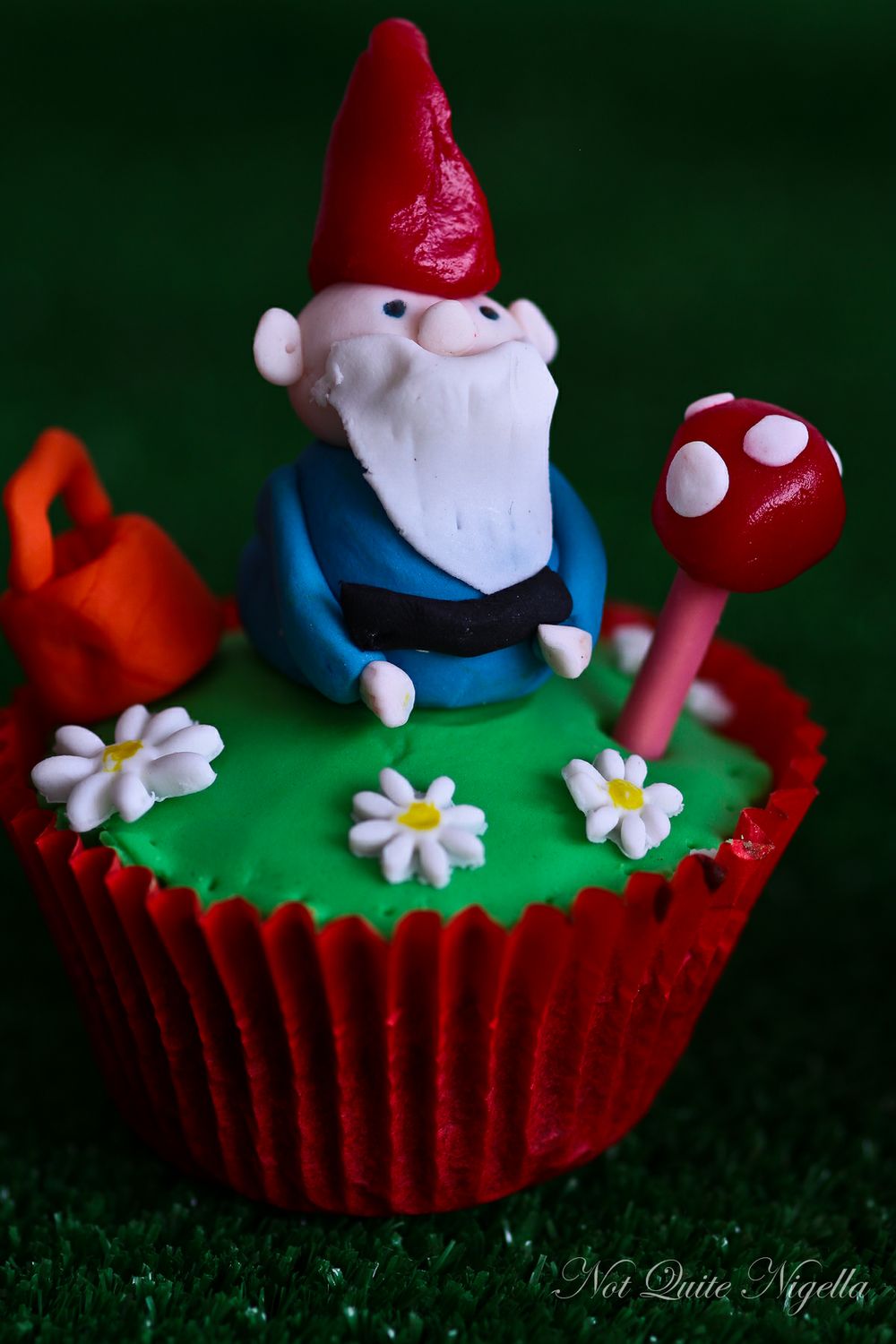 I decided to revisit my gnome friends when I knew that I was going to see my god daughter Evie and her sister Audrey, just in case they had any such gnome notions. The gnomes on top of the cupcakes were surprisingly easy to shape although I will admit completely that they are fussy and I only decorated two of these for the girls (while watching Downton Abbey) although I baked more of the cupcakes. These cupcakes are called honey honey cupcakes because quite frankly they smell of nothing but the sweetest of honey. Actually scratch that, they smell like hot buttered honey toast. Yes you do use a lot of honey and it's not as inexpensive as sugar but the aroma when they are baking will make them worth it, I promise. 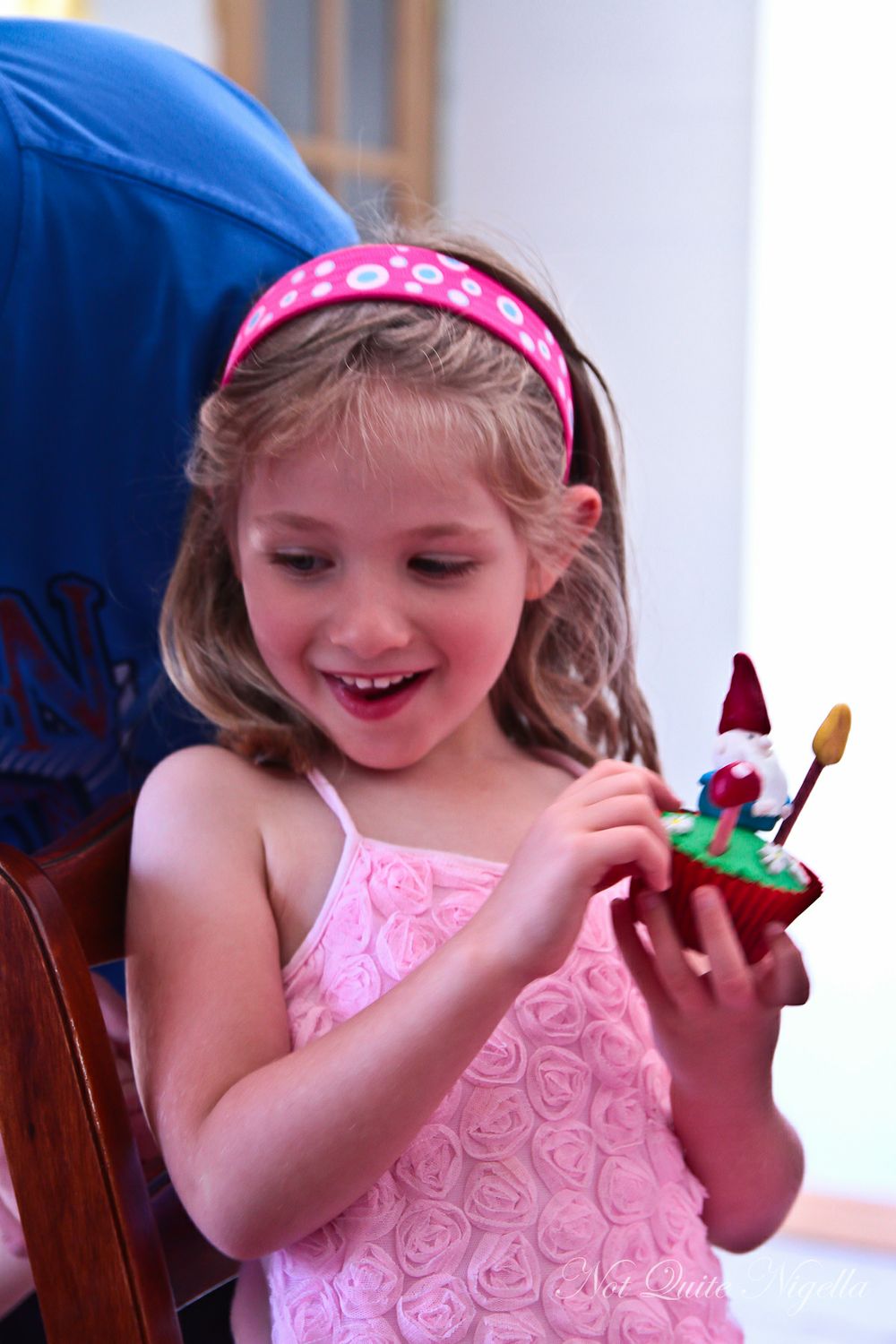 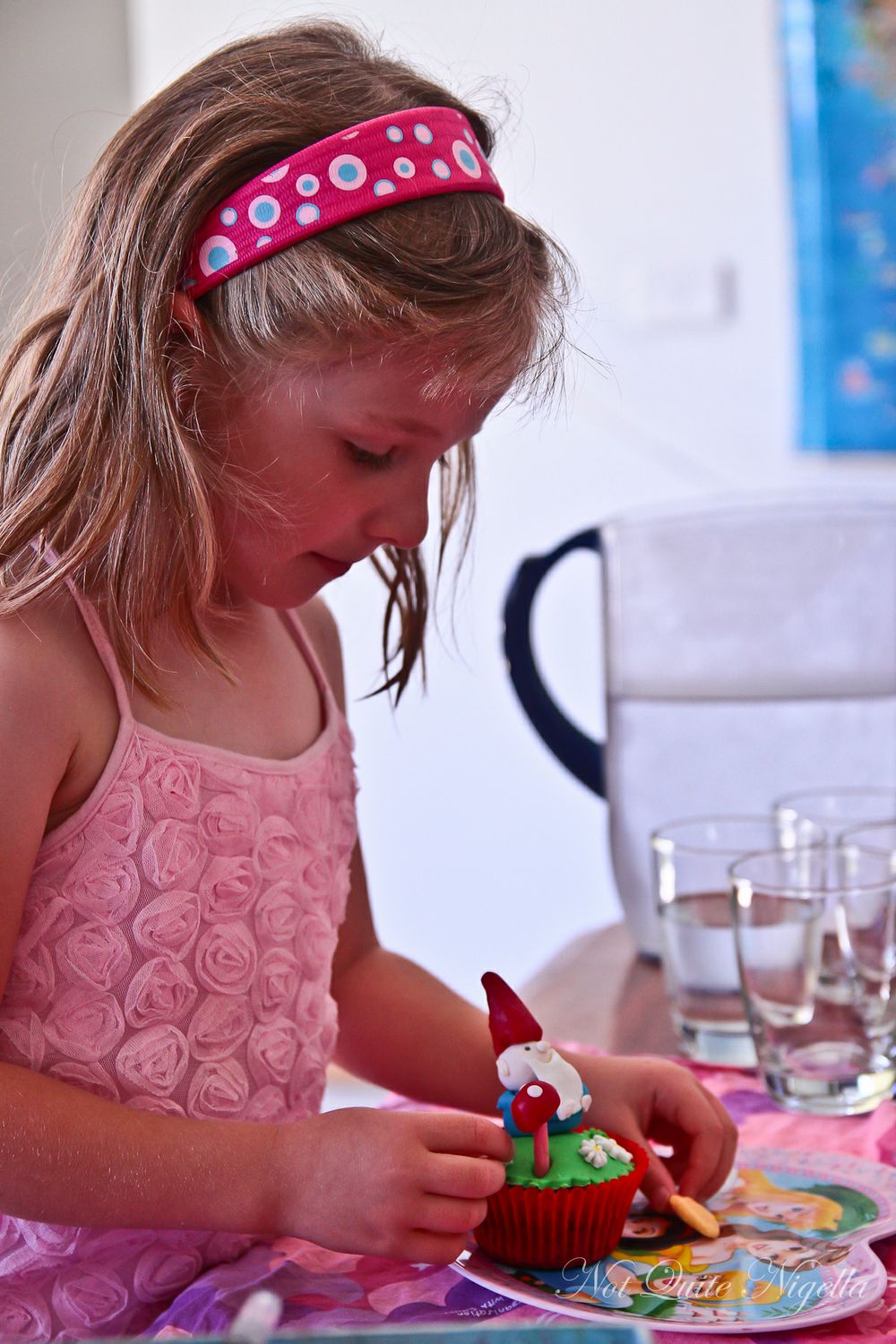 And considers each piece before popping it into her mouth 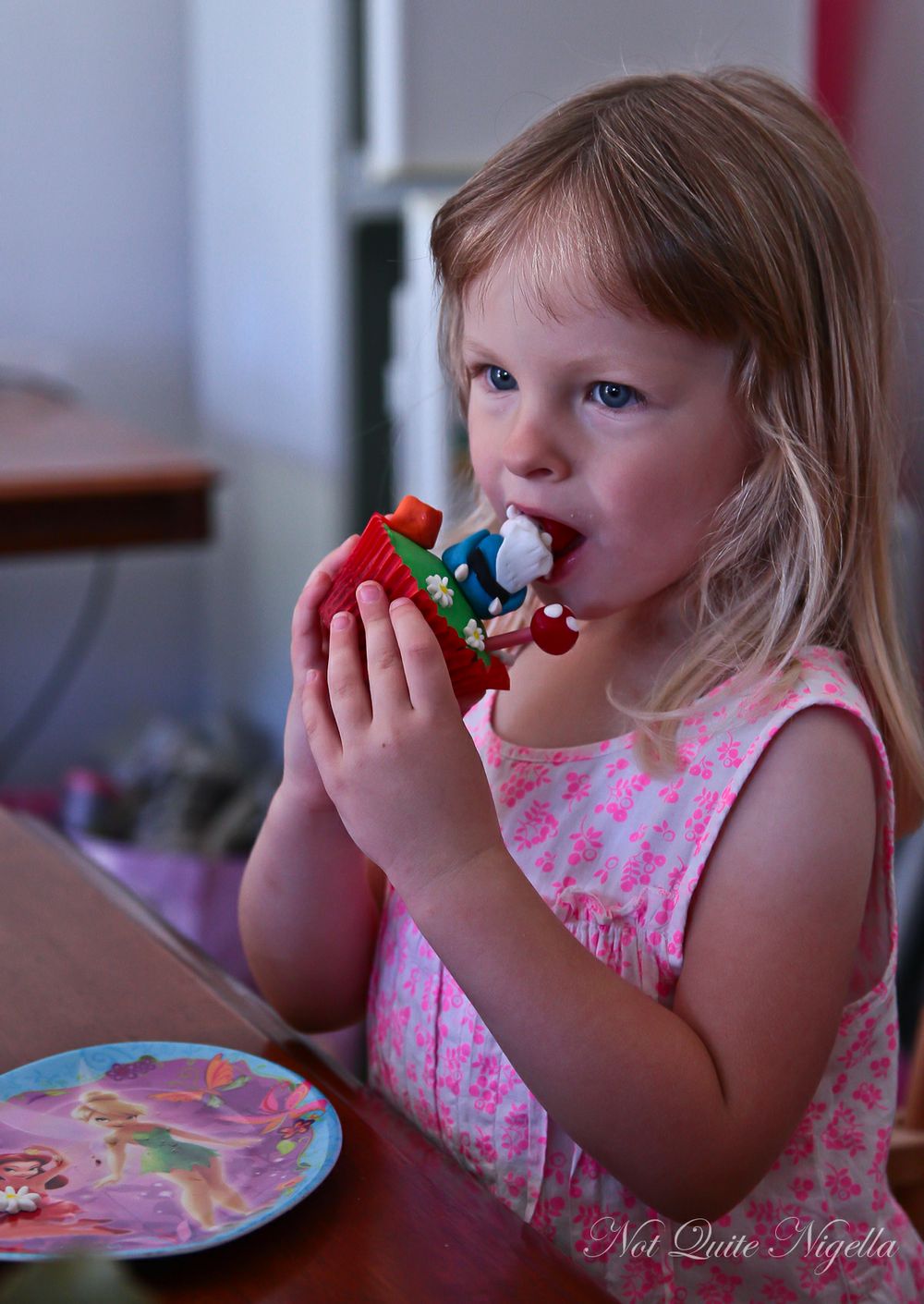 While little sister Evie goes straight for the head of the gnome! 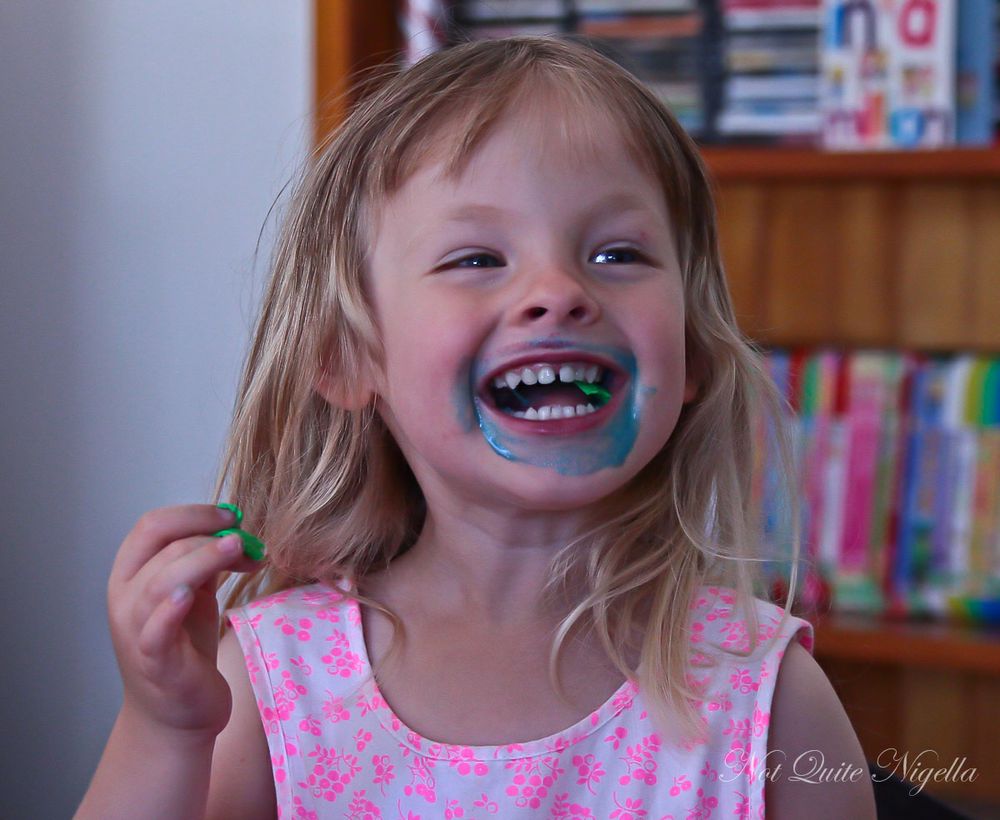 And eats the cupcake with gusto

We brought these to my friend Lulu's house where we visited her, her husband Andrew and daughters Audrey and Evie. They both ate these so differently-older Audrey was measured while my goddaughter Evie went straight for the head and before I knew it, the cupcakes were gone. They showed us their garden where I'm sure mud pies are routinely made and when I asked Audrey where the gnomes live, she pointed out to a corner of the garden where I couldn't see any gnomes but I know that she could. I was also impressed with big sister Audrey who asked me to cut off a piece of scone and then cut it in half so that lil sister Evie could have the other half.

So tell me Dear Reader, did you pretend cook when you were little? And did you share your food with your siblings or were you more a hoarder? Did you have imaginary friends? 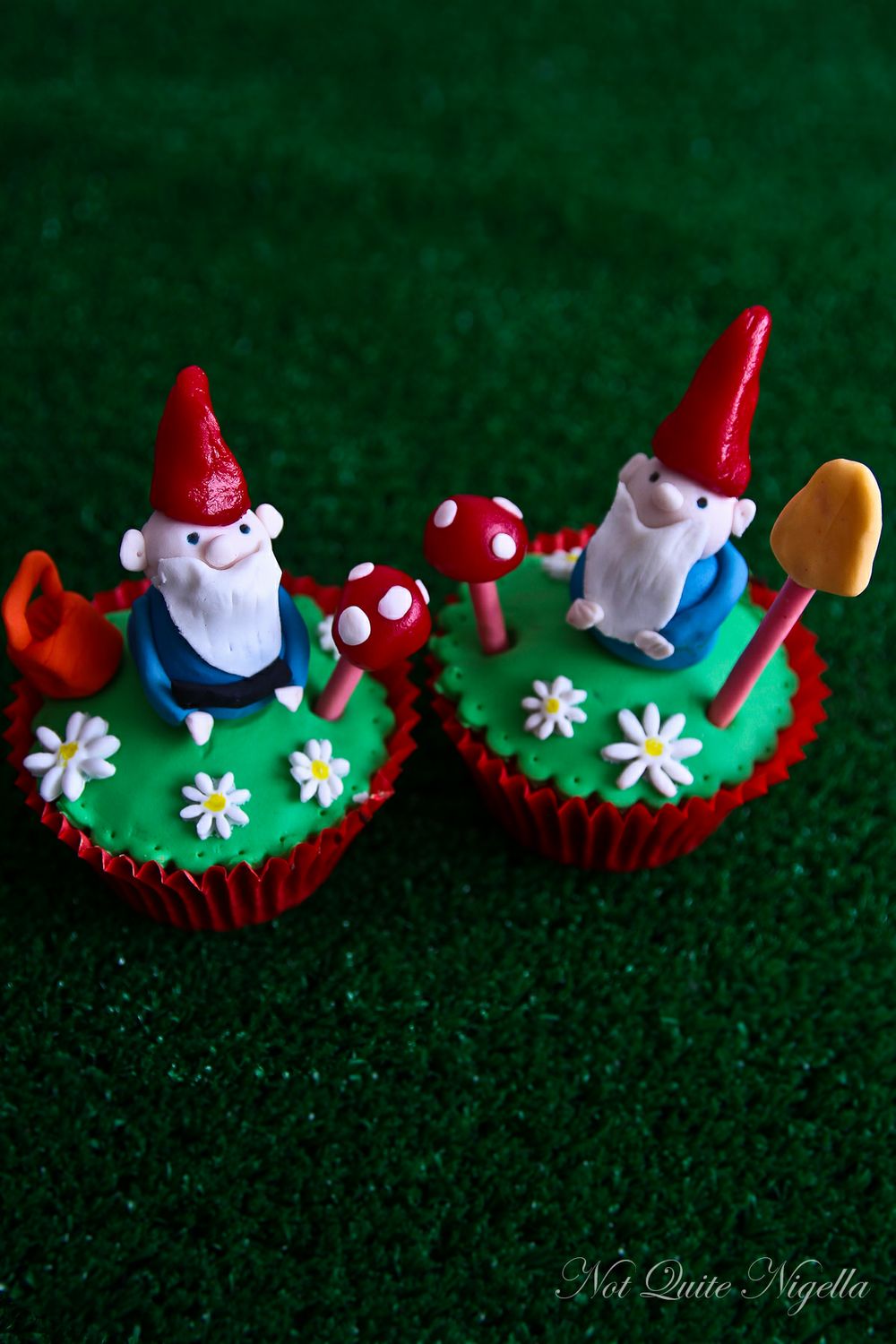 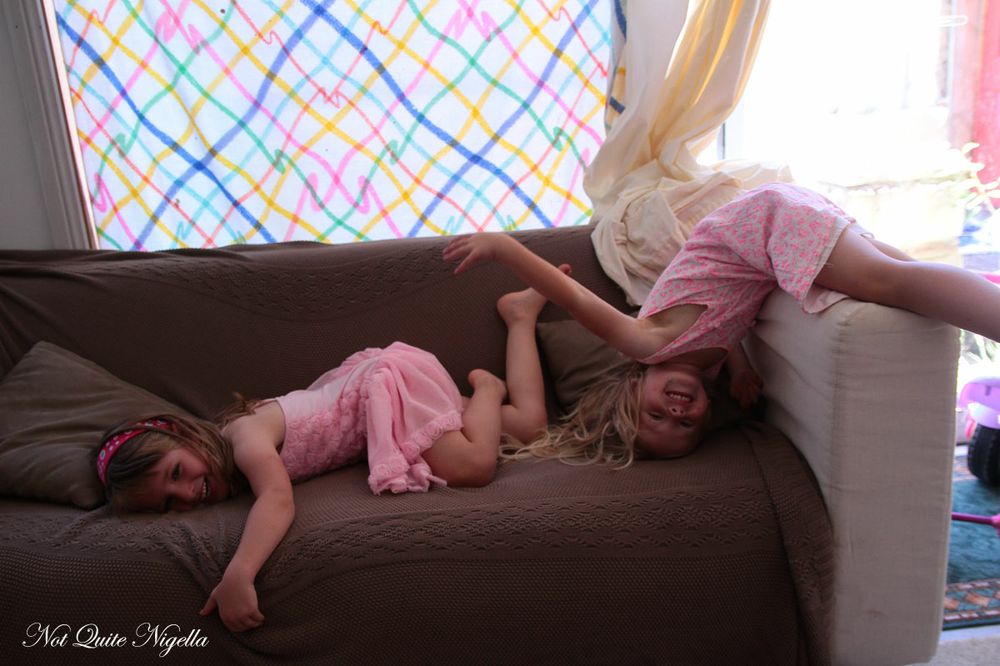 Makes 8-10 cupcakes depending on size of cupcake

Step 1 - Preheat oven to 180C/350F. In a bowl, mix the flour, bicarbonate of soda and cinnamon so that it is thoroughly combined. In a jug, measure out the apple sauce, honey and oil and add eggs and whisk together. Combine together and spoon into cupcake liners until 3/4 full. Baked for 20 minutes until a skewer inserted comes out clean. 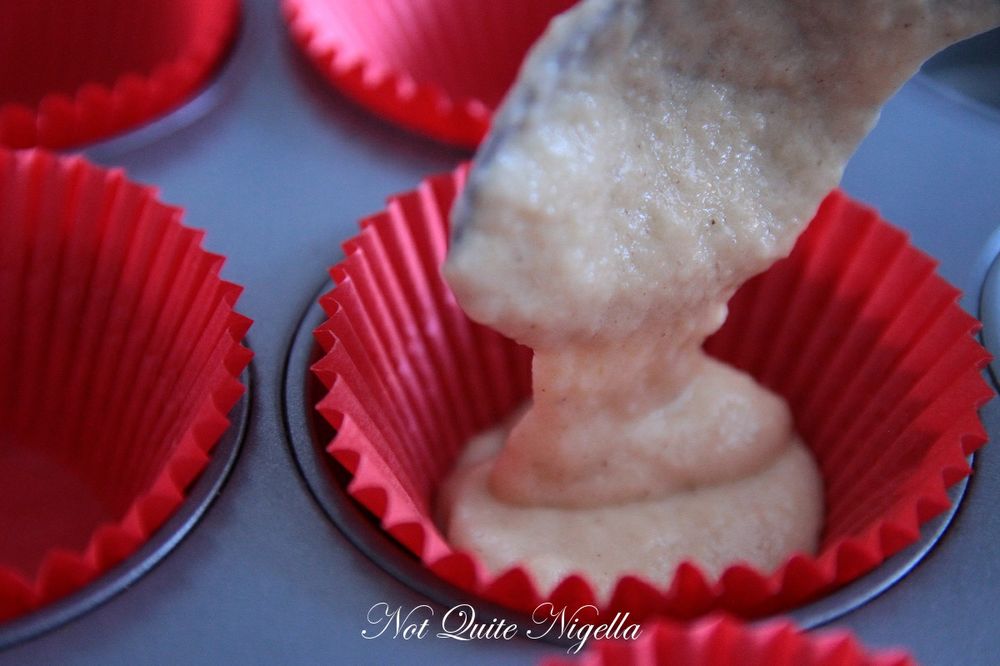 Step 2 - To shape the gnomes, make some blue fondant and roll into a ball with a slight taper at the top-this is the gnome's body. Using a little blue fondant, roll two small sausages and cut in half-attach to the body-they are the arms. if the fondant is warm and soft, the arms should adhere without need for water. 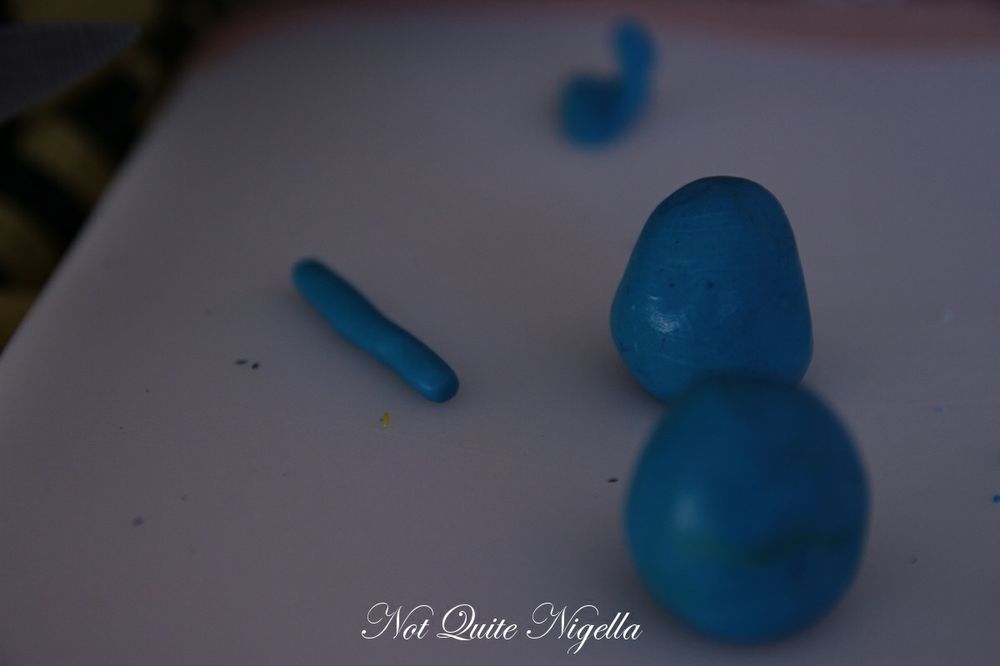 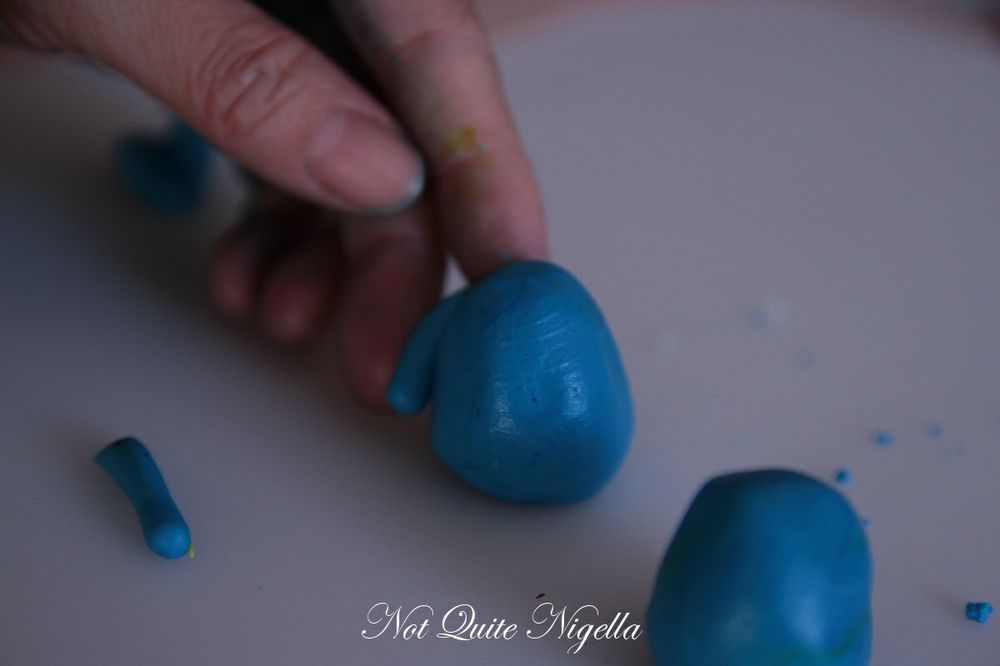 Attaching the arms to body

Step 3 - Add a little pink colouring to some white fondant to make a "flesh" colour. Shape into balls about 1/2-2/3 the size of the body and attach to the body. Roll tiny balls and make ears and nose. With the ears, use a toothpick to make an ear hole in each one. Roll little balls to make hands and attach these to the ends of their arms. 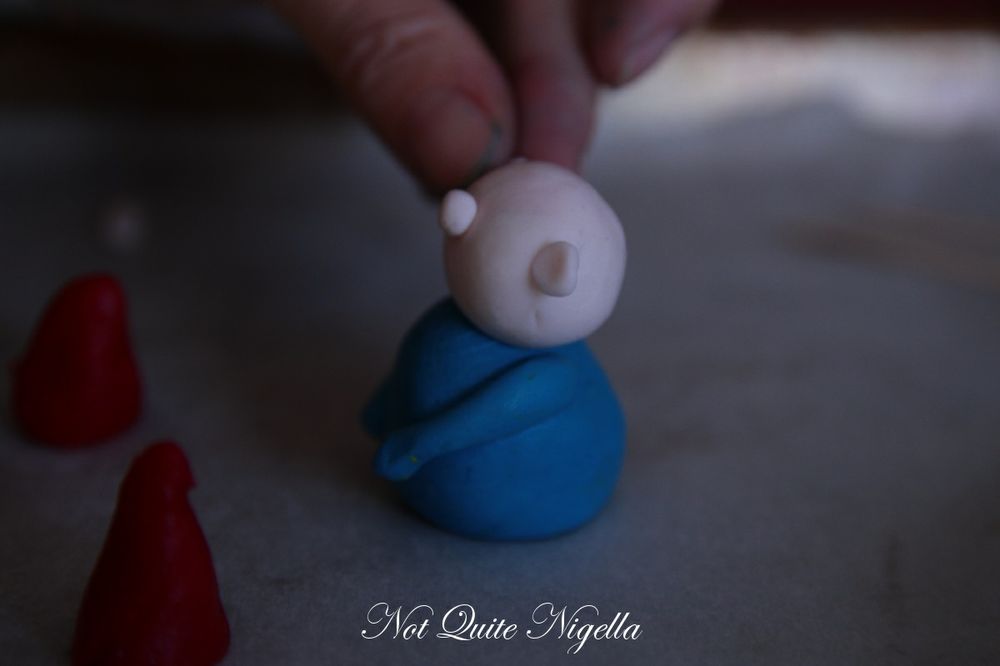 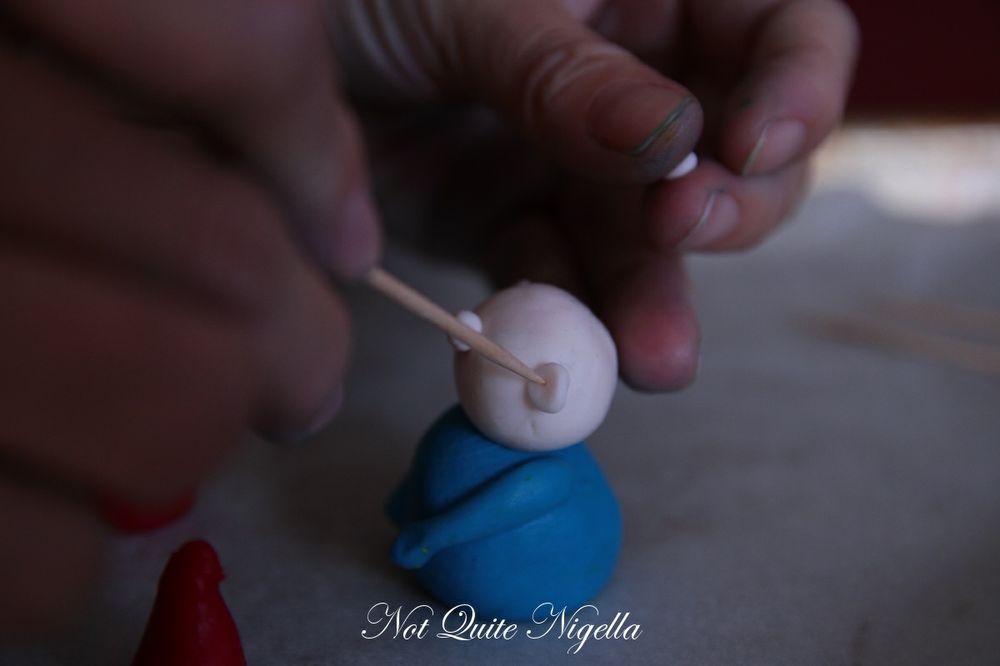 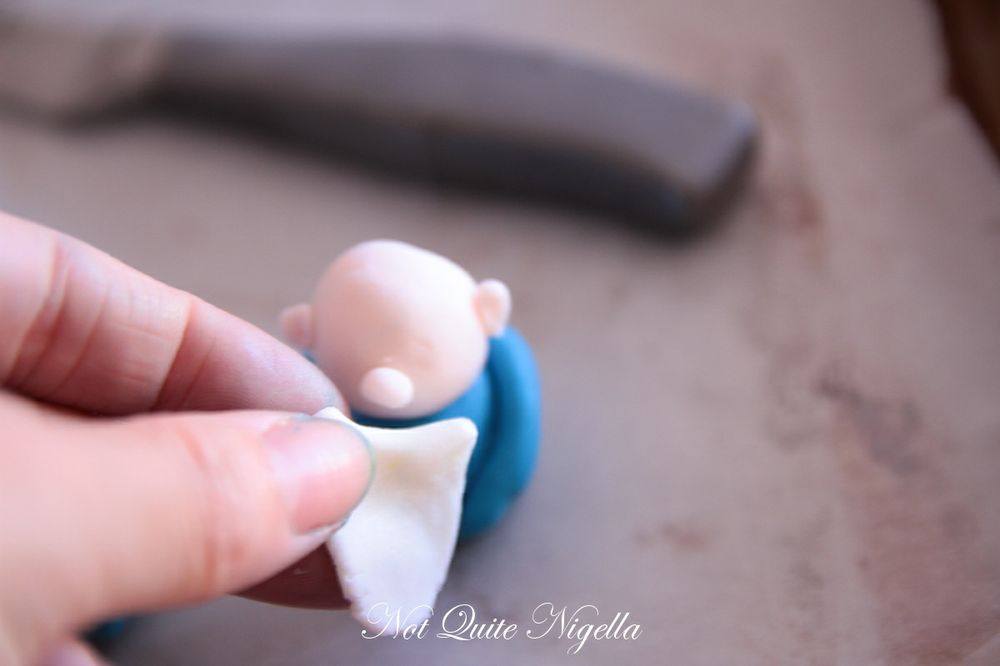 Step 4 - Roll out some white fondant and cut a triangular shape. Attach this to the face 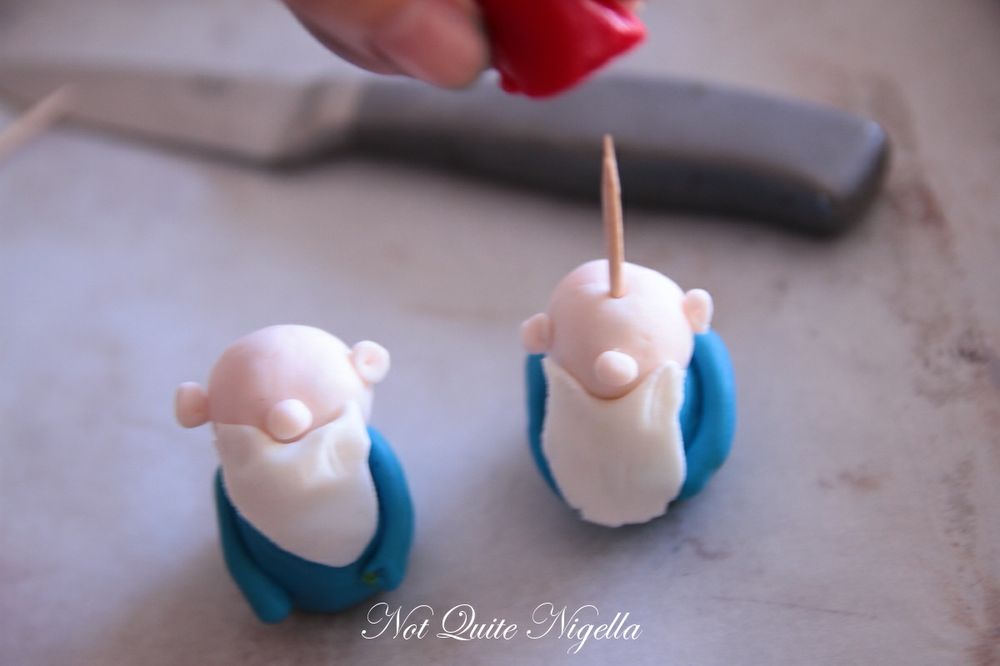 Step 5 - I find the red fondant that I have quite tricky to work with as it bleeds everywhere so if you do too, do the red gnome hats last so that it doesn't get all over your fingers and board. Roll into a triangular shape. I used an icing tip lined in parchment to help shape it. Place a toothpick vertically so that the gnome stays together. Also don't forget to remind the kids and adults that there are toothpicks, you can probably do without this step if you aren't transporting them and it's always best to tell people about toothpicks or avoid using them if possible. 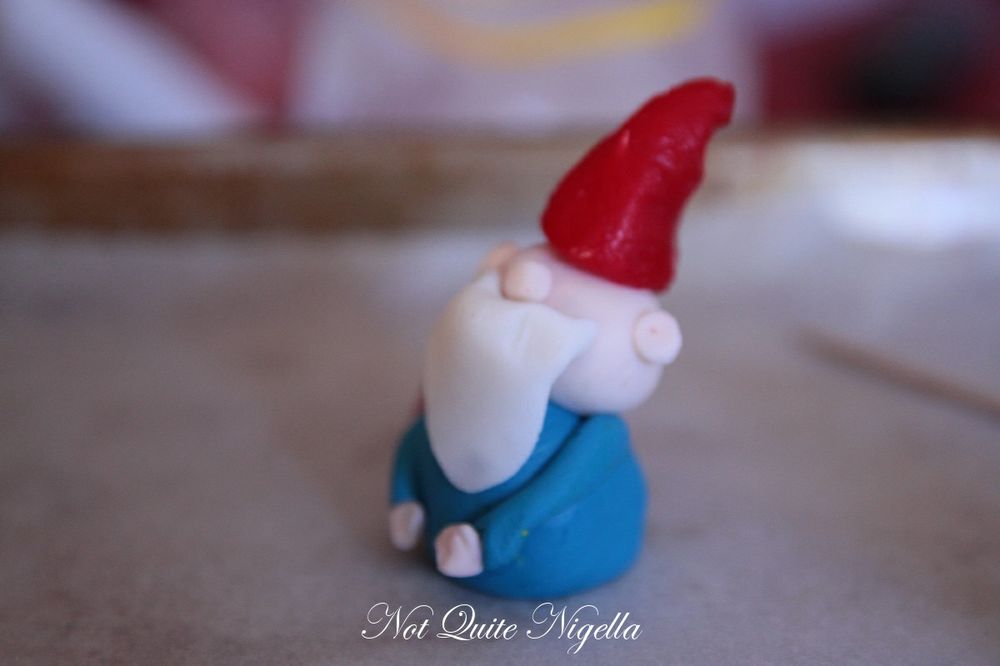 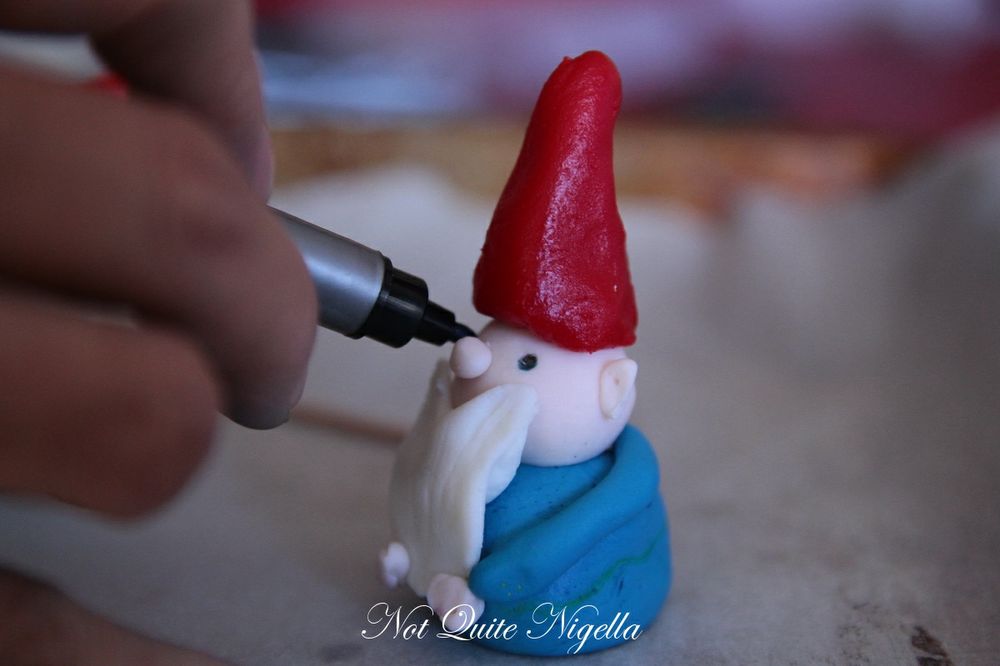 Step 6 - With the edible black pen (you can use a non toxic texta too), draw little eyes on the gnome. 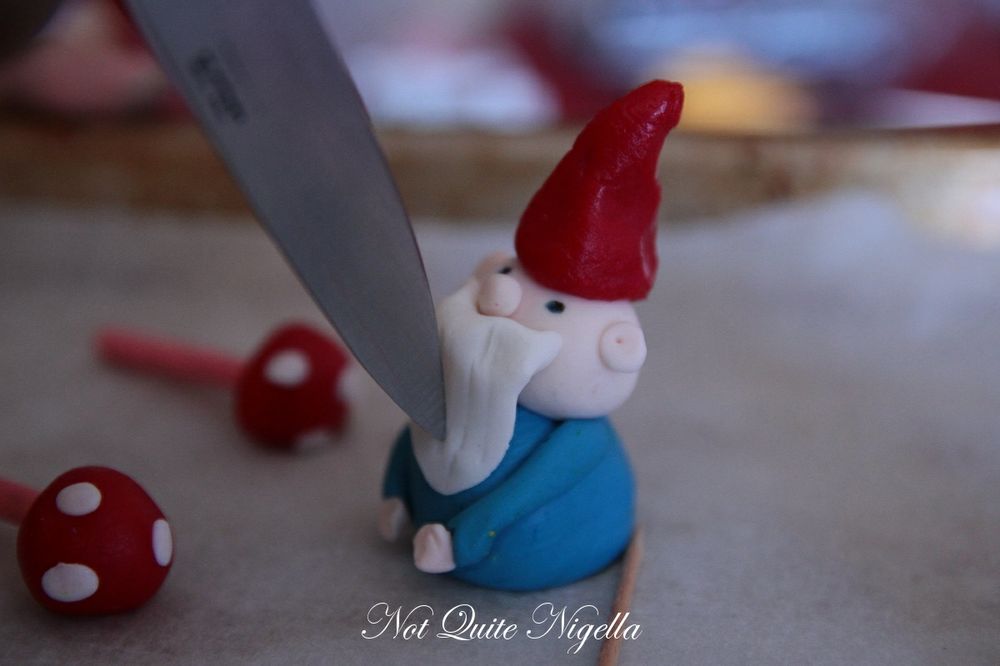 Step 7 - Then using a small paring knife, give the beard some texture by pressing down gently to make lines. 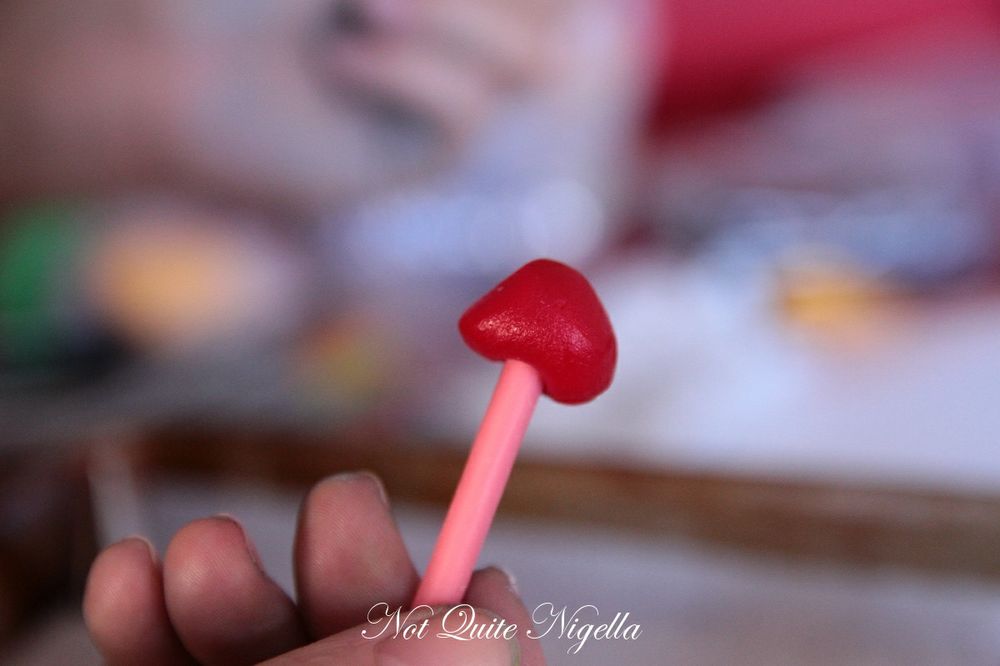 Step 8 - Break a Pocky stick in thirds or halves and place some red fondant on the end and shape like a mushroom. Clean your hands (the red fondant tends to really stain and stick to hands) and then add little white balls to resemble toadstools.

Step 9 - You can give the gnome a garden tool-I made a pail which was actually meant to be a watering can but by the next morning the spout had fallen off so I made it a pail. I also made a shovel which I fastened on the end of a Pocky stick. I also made some daisies and coloured the centre with yellow edible pen. 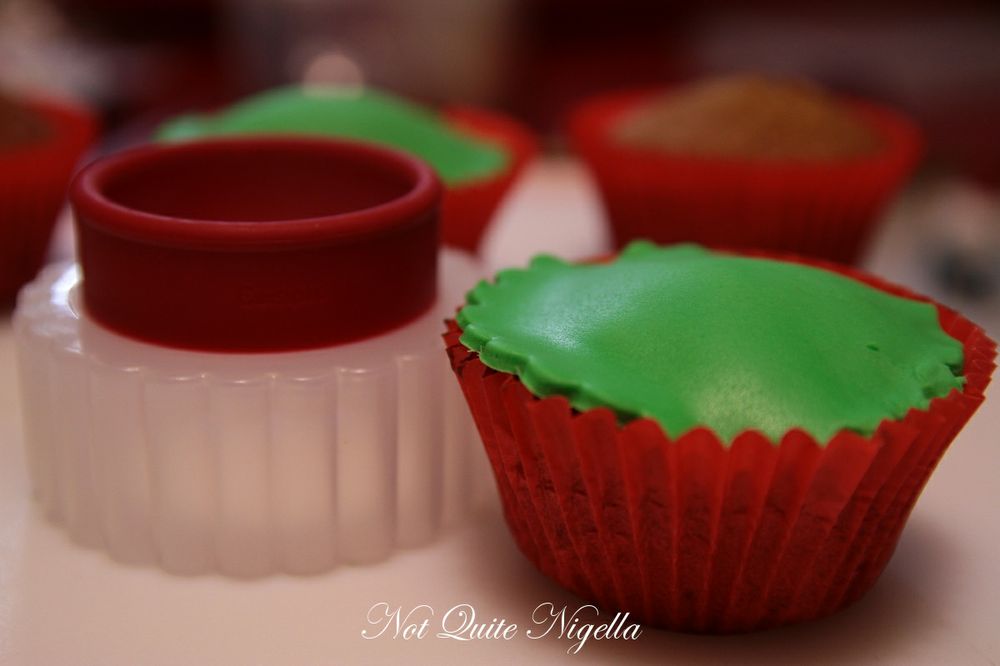 Step 10 - Lastly, roll out some green fondant to fit the top of the cupcakes-I used a fluted cutter and used a toothpick to press dots into it. Using some water on the fondant or another toothpick, attach the gnomes to the cupcake and sink the mushrooms and shovel deep into the cupcake using the Pocky stick. 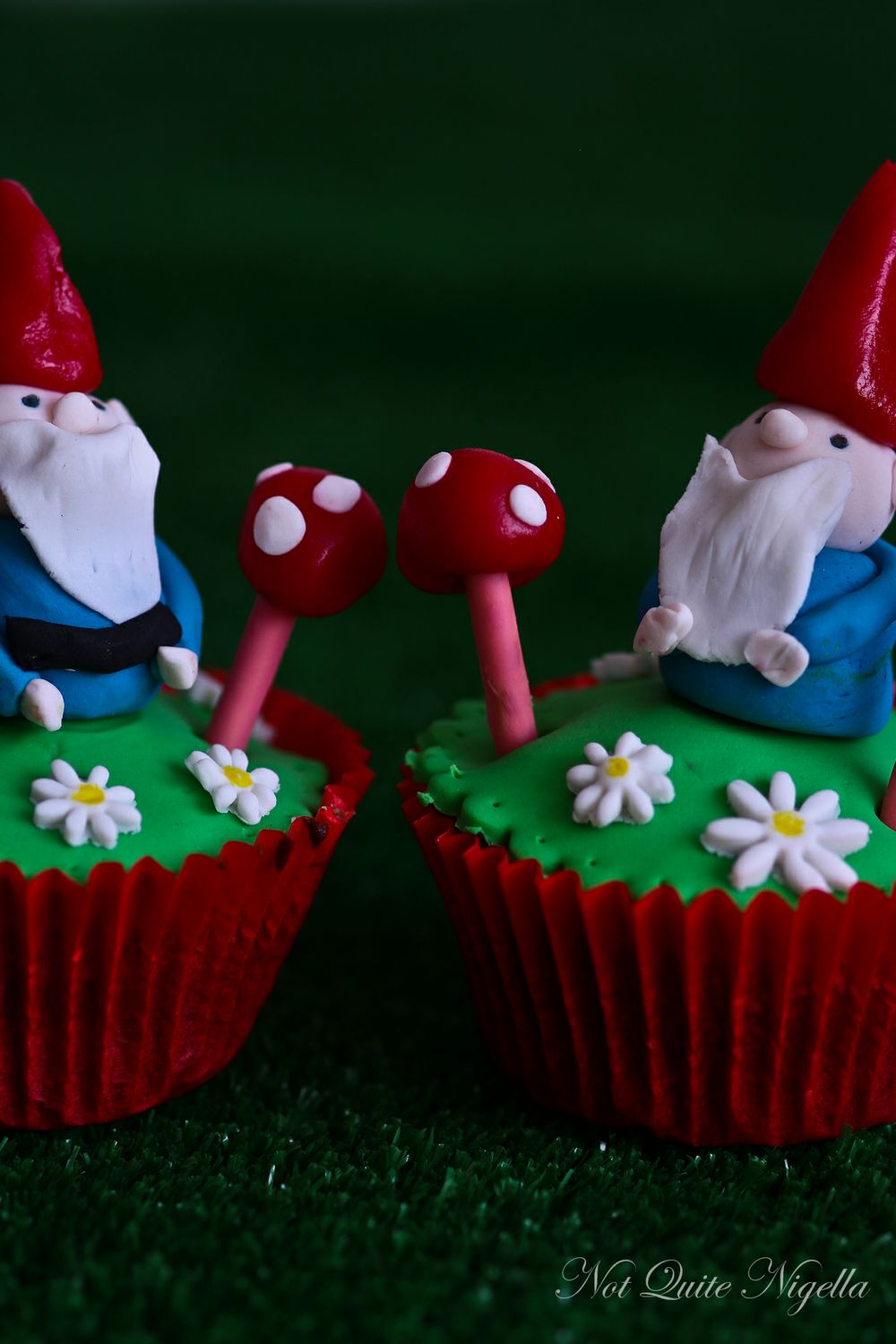