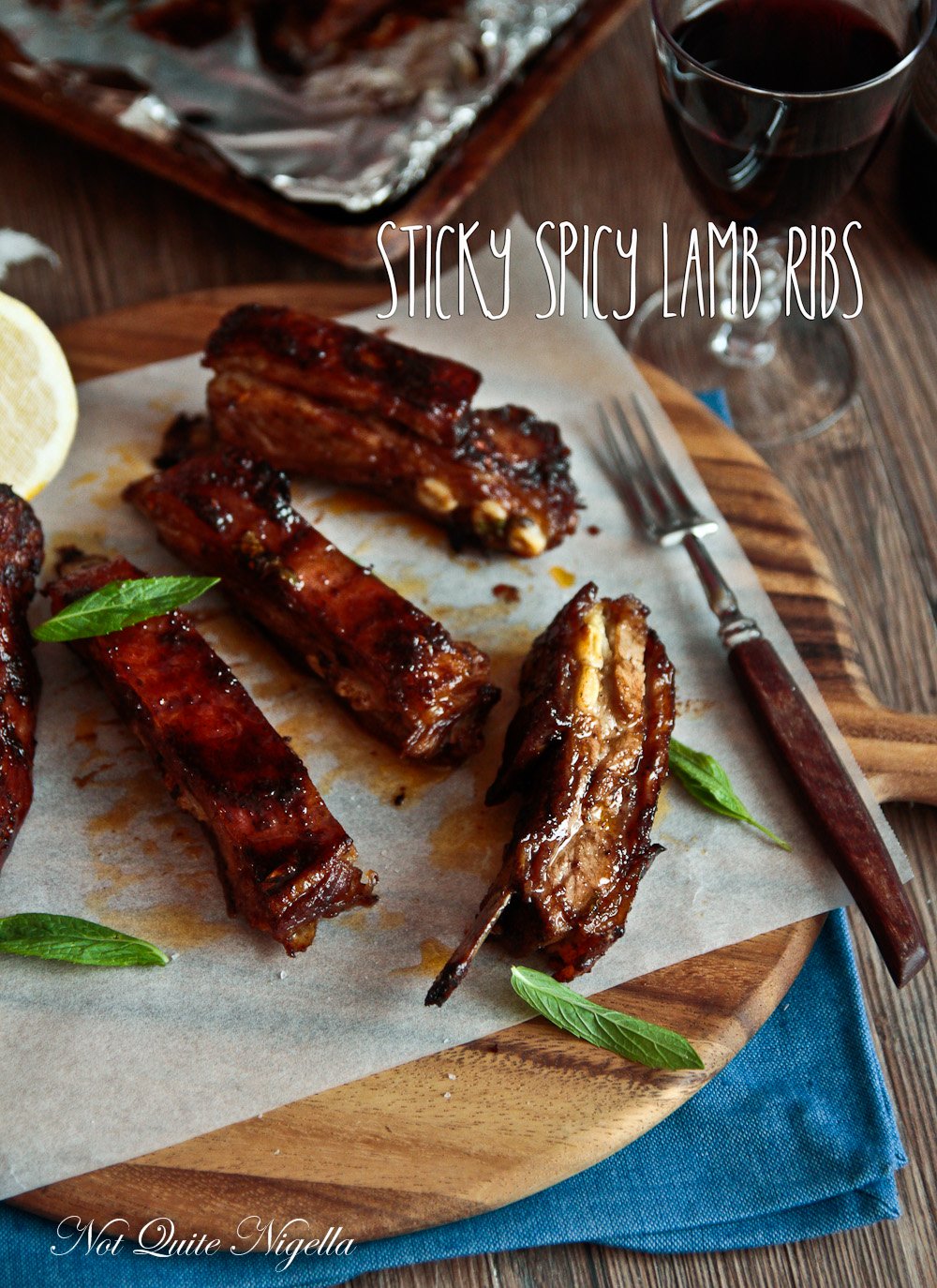 One day my sister was back in Australia visiting from London and she called me on the phone.

"With his bare hands?" I said half joking.

I know that my father didn't deliberately run over the pigeon but when I told Mr NQN of this tale he likened it to the way that I walk around our apartment. My animated gestures, sugar fuelled hijinks and dramatics means that I often catch my sleeves on things, objects slide off the sides of tables and I leave a trail of destruction behind. I believe they call it collateral damage. And like my father didn't mean to run over that pigeon, I believe that the pigeon was just collateral damage. Like father like daughter in this case.

One way that I differ from my dad is that I love lamb. He is not as fond of it as he feels that it's too fatty and not a single scrap of lamb touched our dinner table growing up. And when I came across a lamb rib dish a few months ago at Spicy Sichuan, I was so smitten that I wanted to do something similar. 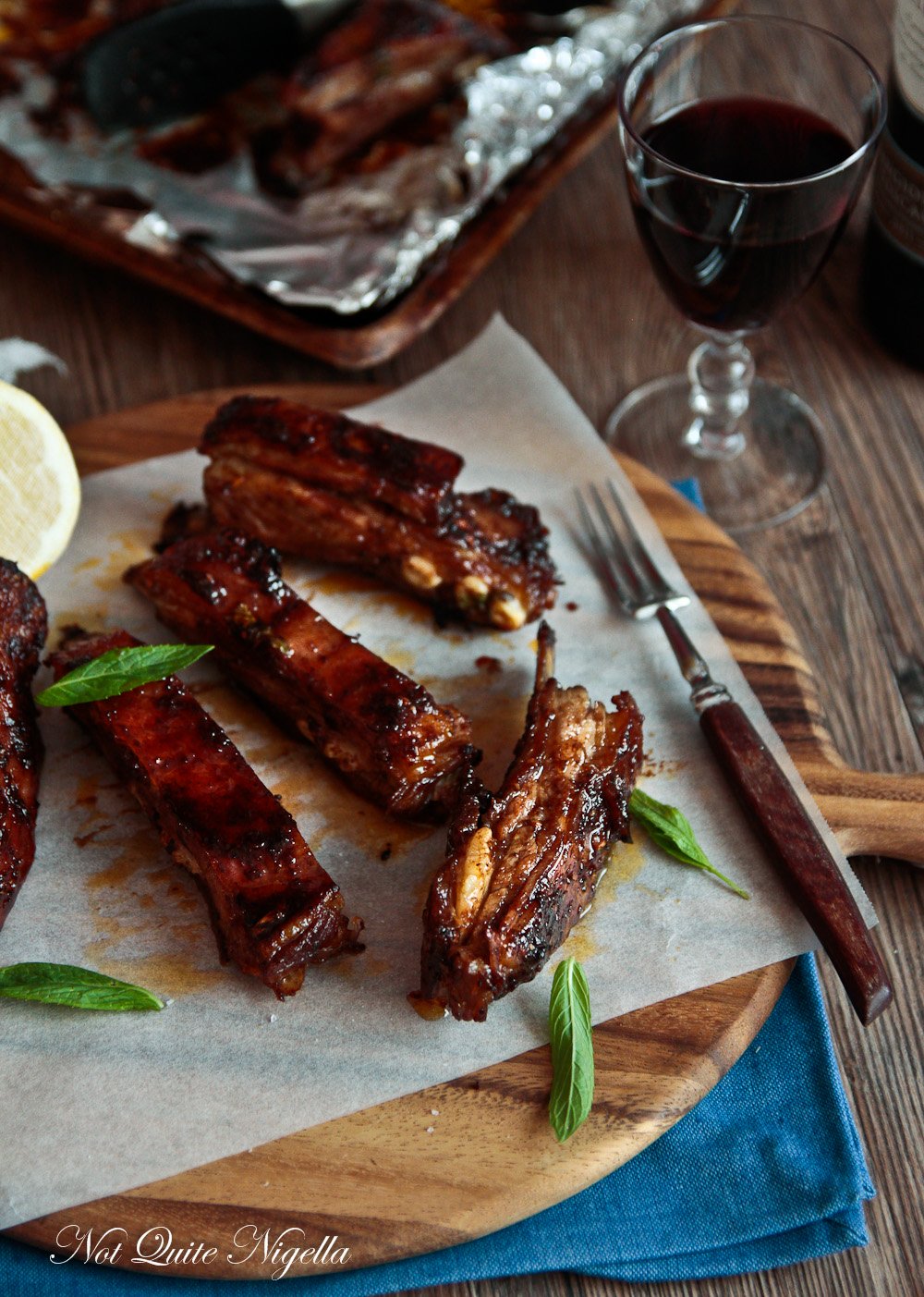 I experimented with a few spice rubs and glazes until I arrived with something that I think I could even convince my lamb fearing father to eat. The lamb ribs or riblets as they are sometimes called are different from cutlets which are trimmed although feel free to use cutlets if that's all you have access to. Lamb ribs are tasty, very inexpensive at around $7 a kilo as compared to cutlets which are around $30 a kilo and are generally procured from butchers that break down the animals themselves.

Most people think of lamb as a spring item and it's true, spring lambs are very tender as they are so young although they tend to be less flavoursome than lambs that have had time to feed on pasture. In this recipe, the lamb is given a burst of flavour as it is smothered in an aromatic spice rub made up of sumac, Turkish red pepper seasoning, cumin, garlic and salt and slow baked in a low oven for two hours.

After that it is glazed with a tangy, sweet tamarind and brown sugar glaze which crisps up the ribs beautifully. When Mr NQN came home from work at 6:15pm that evening he asked me why I wasn't eating. It was then that I had to confess that I had eaten my dinner at 5pm after the photos were taken. Well at least I hadn't broken anything or killed a pigeon! ;) And yes, this is one of those pushy recipes that I urge you to try if you love lamb!

So tell me Dear Reader, which parent do you take after? And do you tend to eat more lamb in spring or do you eat it all year round? And was there ever something that you desperately wanted to eat as a child but was never allowed to? 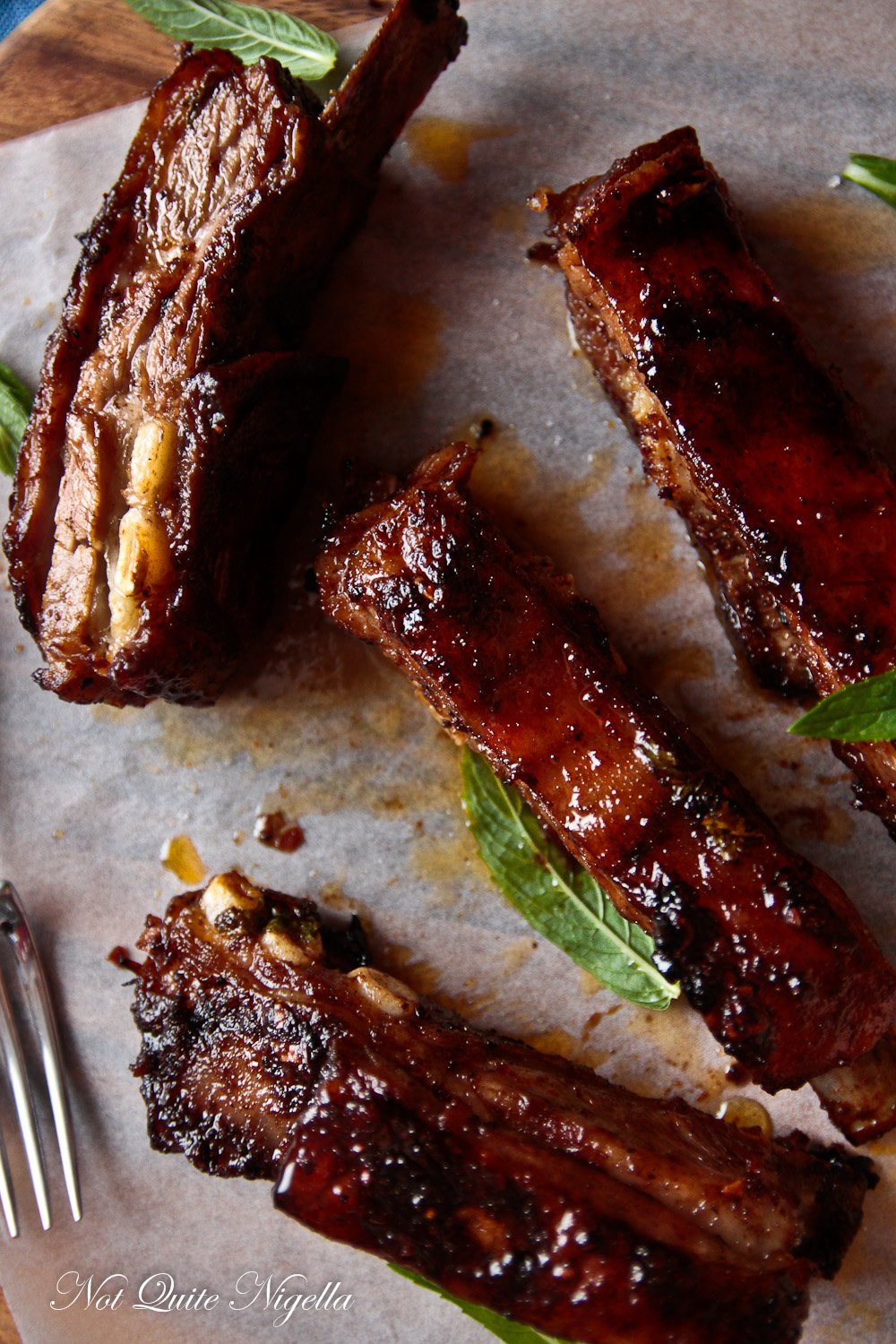 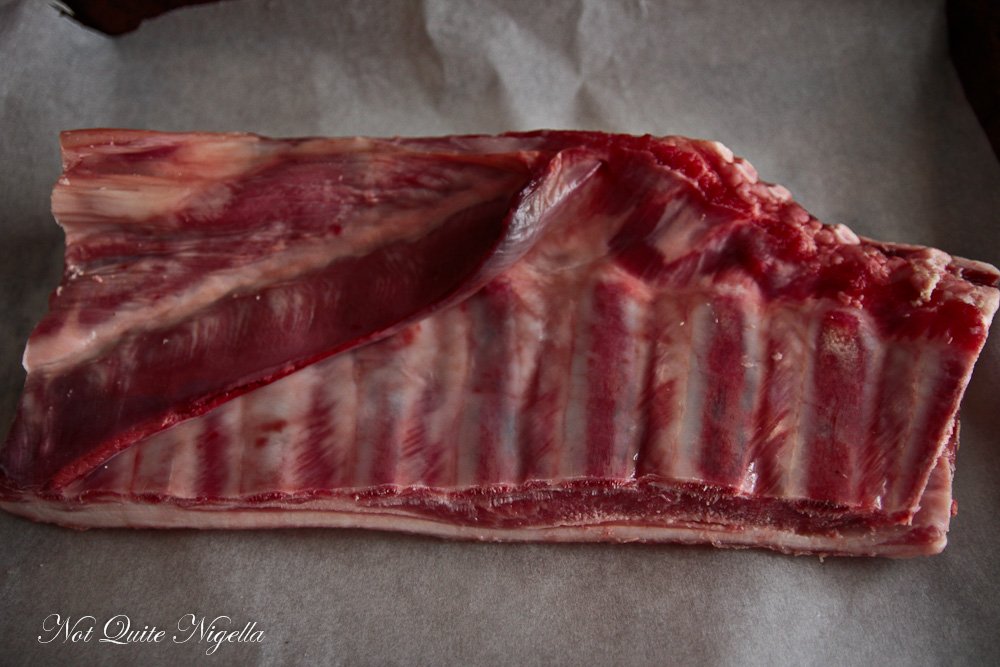 The membrane flap on the top left

Step 1 - Remove the membrane or flap from the bony side of the lamb ribs with a sharp knife. 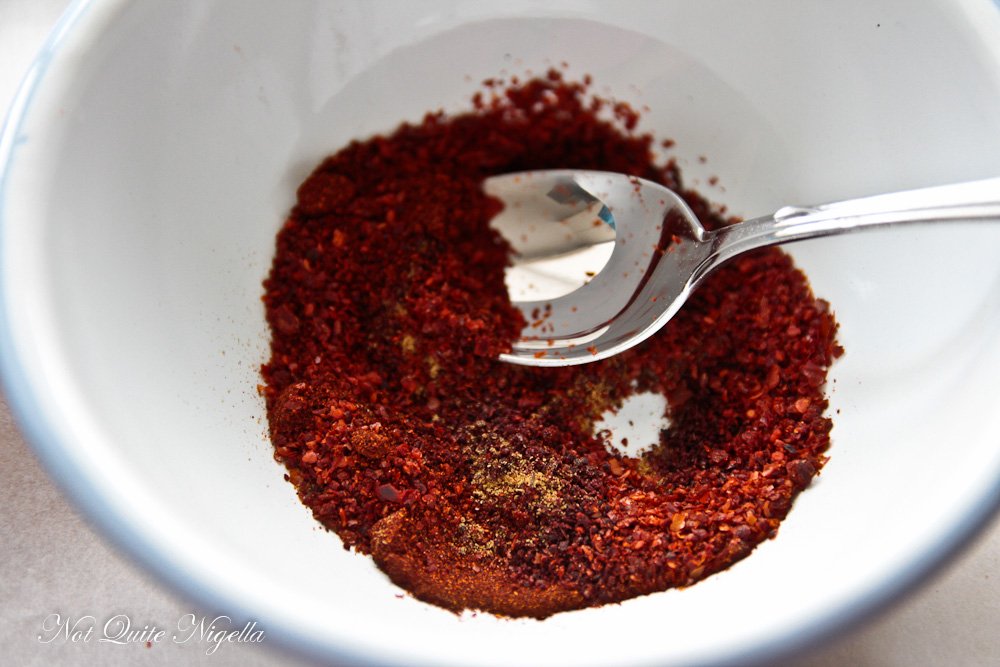 Step 2 - Mix the olive oil, sumac, cumin, red pepper, salt, black pepper, paprika and garlic to form a paste and baste the lamb ribs on both sides. Allow to marinate for at least 1 hour. 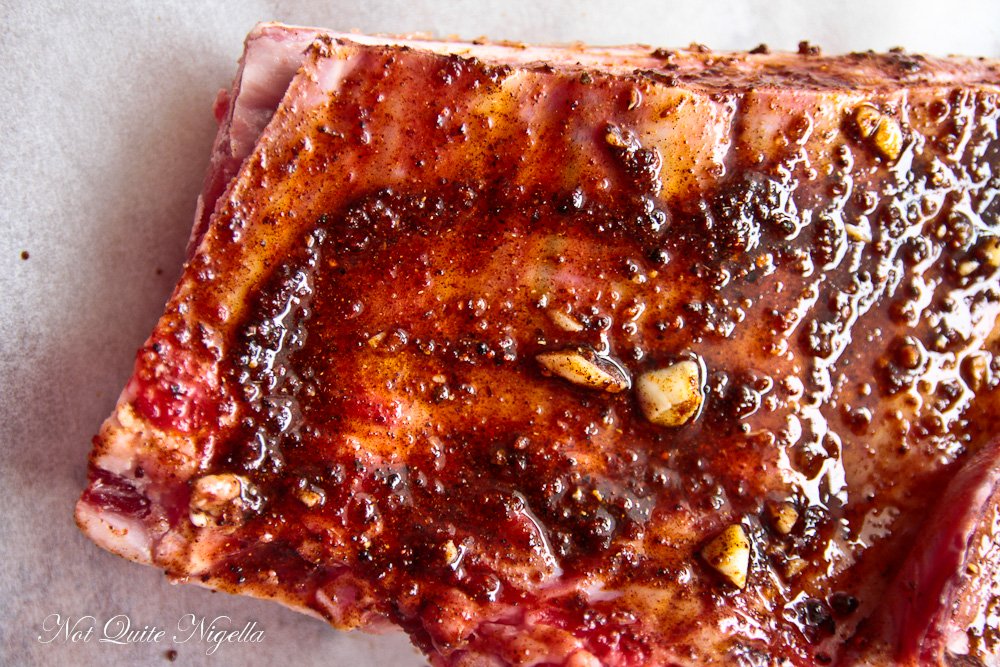 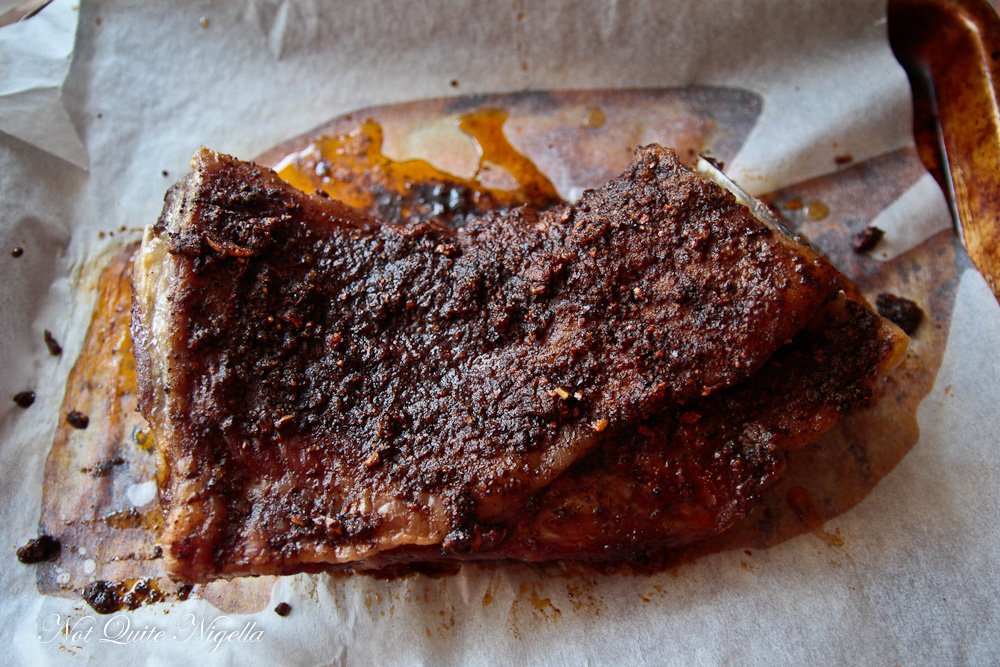 Quote from Seinfeld: "Do women know about shrinkage?"

Step 3 - Preheat oven to 140C/ 284F. Cover the ribs with foil and roast for 2 hours. The ribs will shrink considerably. Allow to cool (if you have time, cool them completely). Cut into individual ribs-a lot of the fat will run out from these when you cut them. Don't be alarmed, lamb is fatty and at least the fat has run out right? ;) 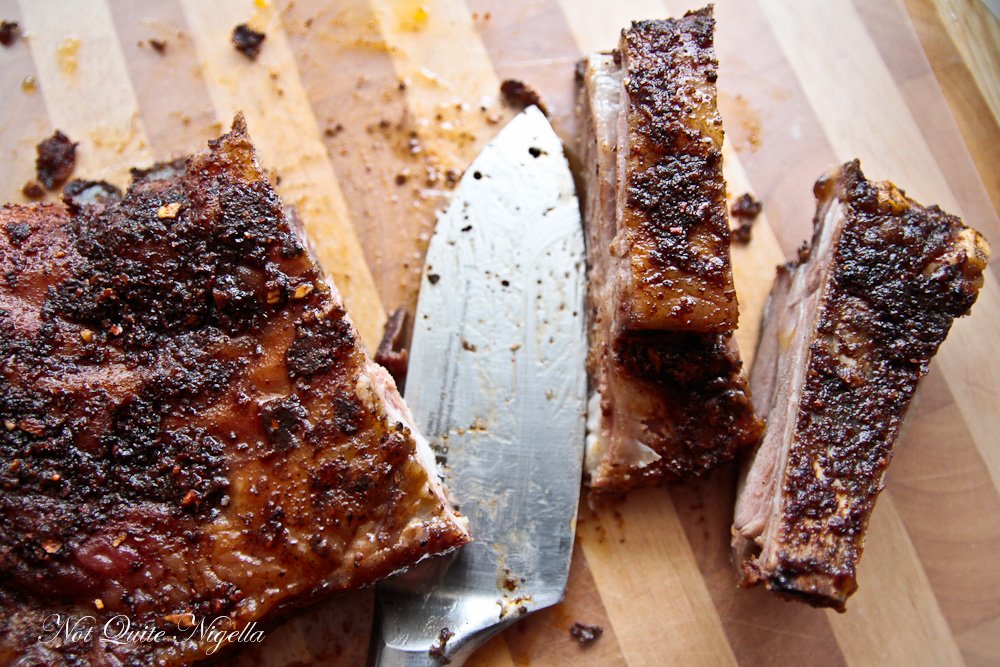 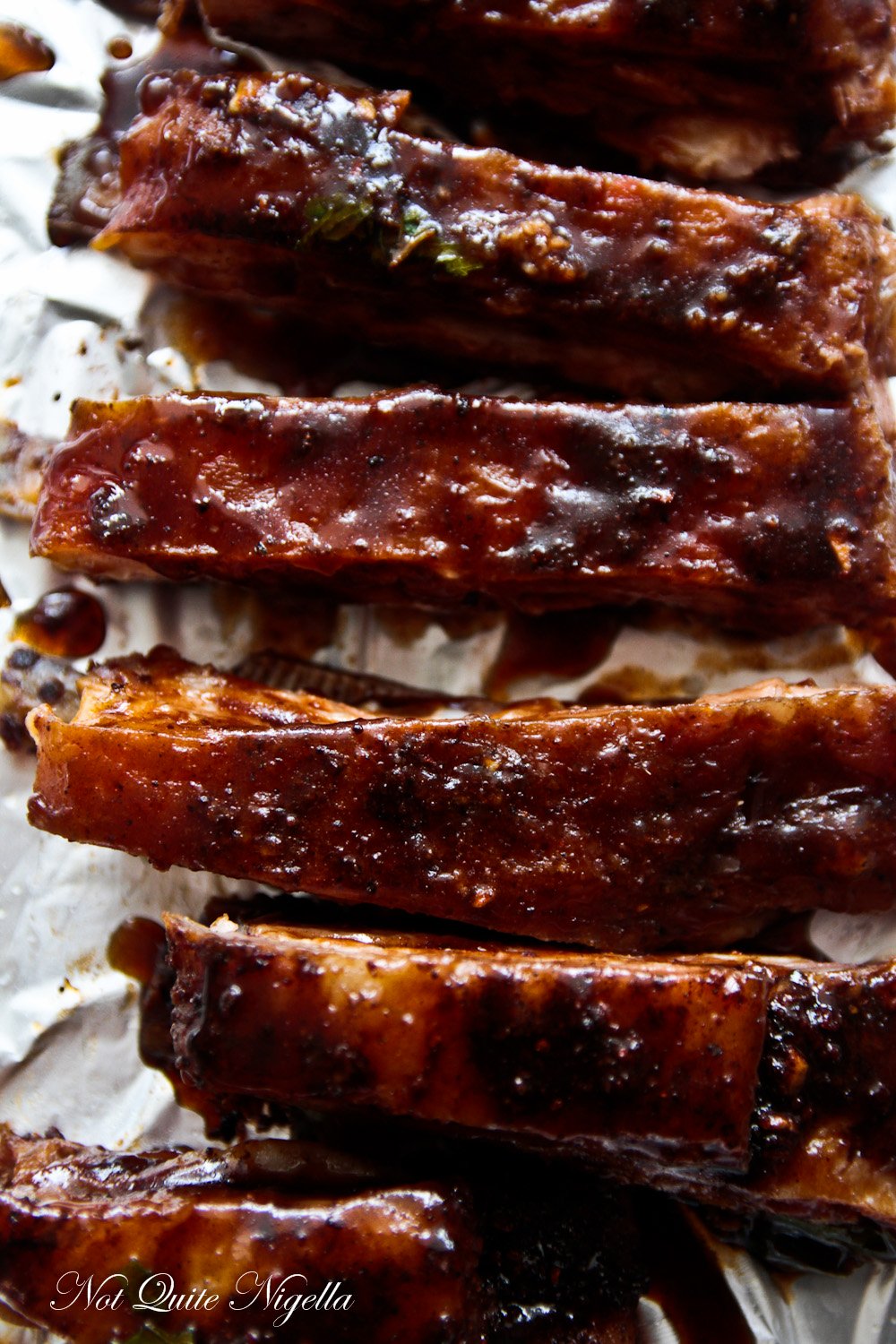 The glaze on the ribs before baking

Step 4 - Place a rack on a lined baking tray and place the ribs onto the rack so that any excess fat can drain. Mix the brown sugar, fish sauce and tamarind paste together to form a glaze. Brush the glaze onto the meaty top of the ribs and bake at 180C/350F for 10-15 minutes until sticky. Serve with lemon with some roast potatoes. 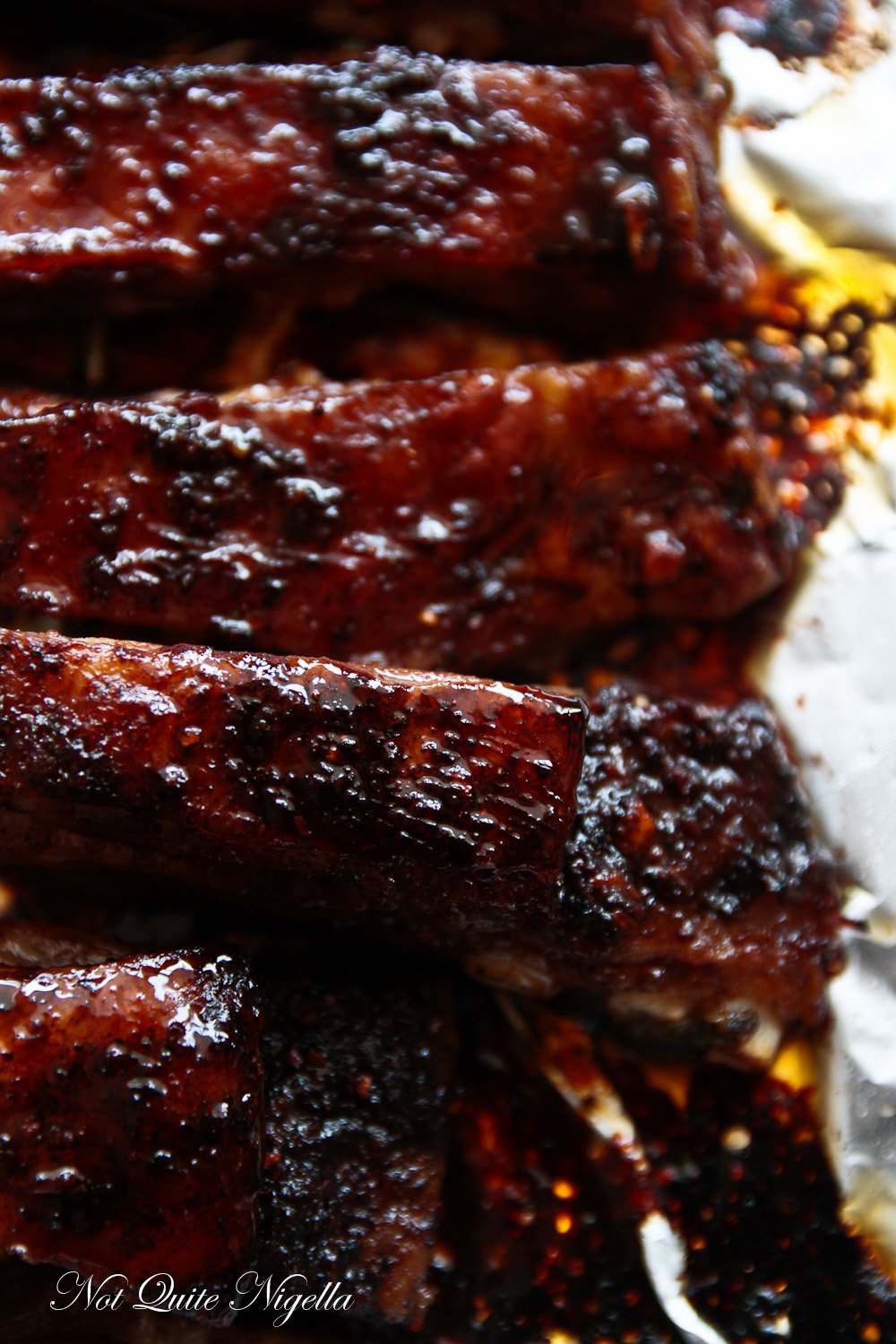