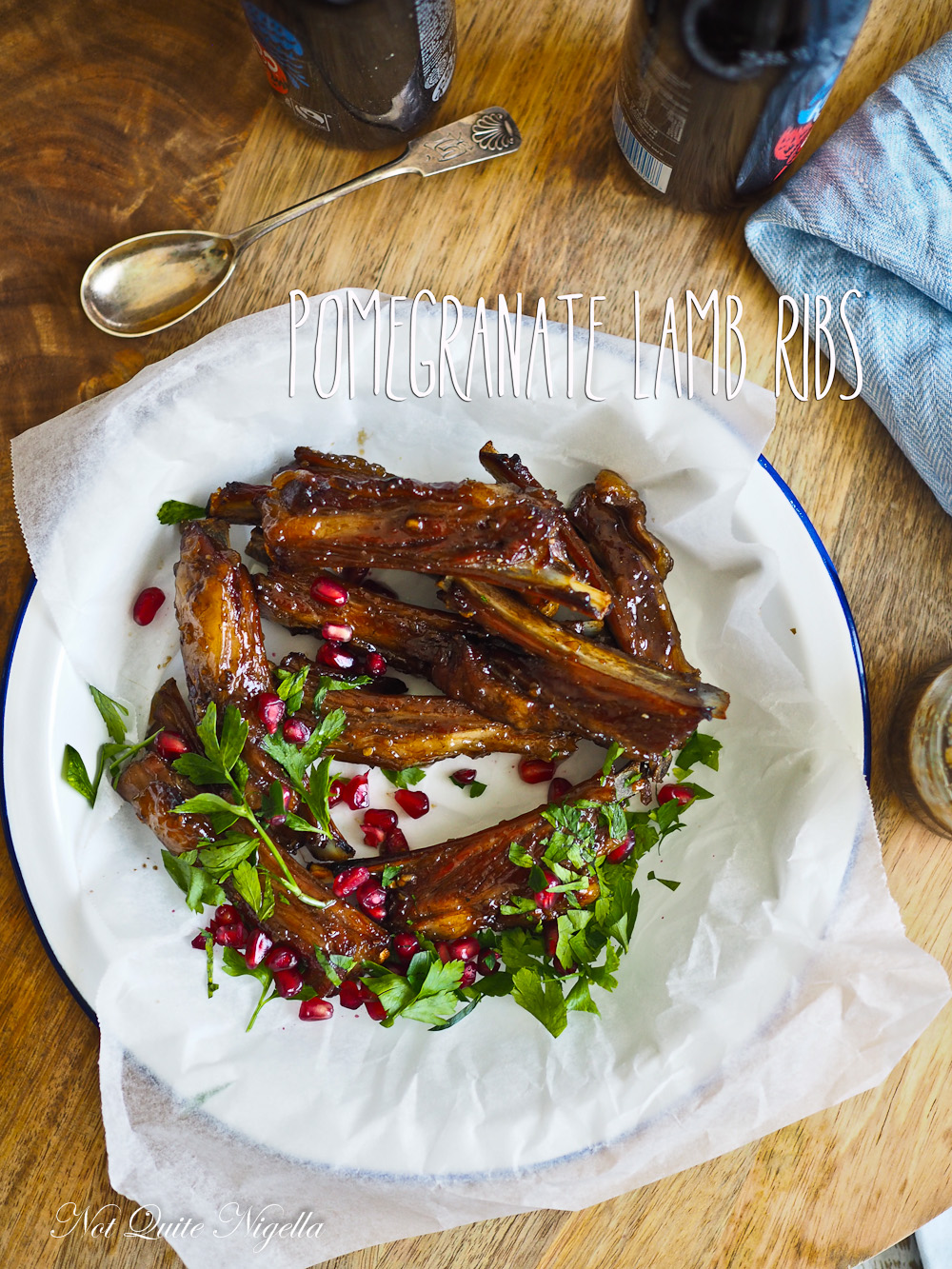 Lamb ribs or riblets are the more economical but no less spectacular cousin to the lamb cutlet. They deliver so much in terms of meaty juiciness and are so straightforward to cook (just roast in the oven) that they're perfect for an Australia Day party! These glazed pomegranate, garlic, black pepper and honey lamb ribs will definitely have you licking your lips!

I developed this recipe for a family dinner. Truthfully my parents aren't huge lamb eaters but my sister has a complete obsession with lamb. She lives in London and she misses Australian lamb so when she comes home over Christmas and early January she always orders it when she sees it on a menu. 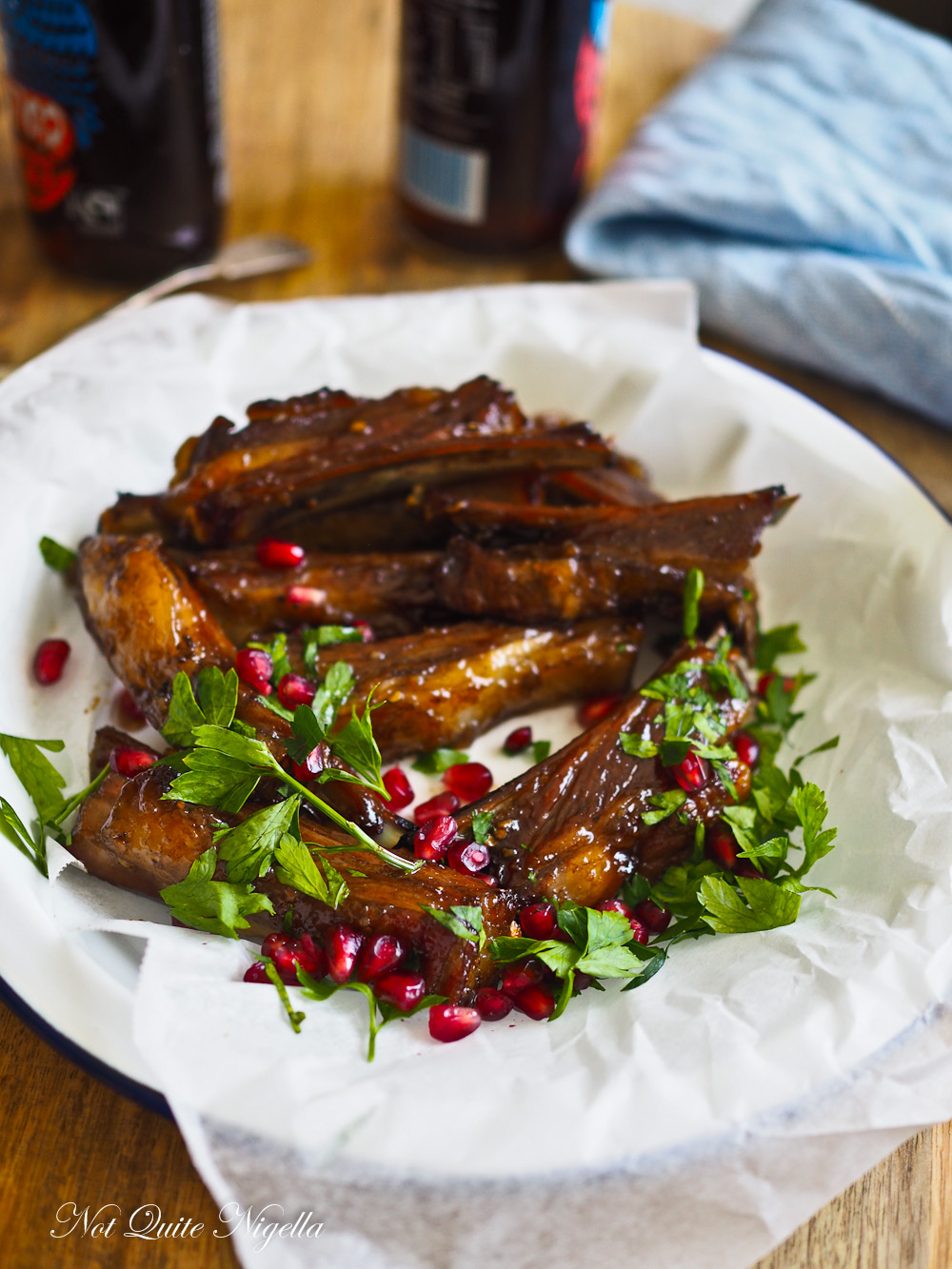 While lamb is tender, I wanted to make a dish that would counter the richness of the meat. I find tangy, fresh flavours best for it especially a juicy cut like the lamb rib so I used pomegranate molasses for that along with garlic, black pepper and honey. It was a very simple cast of flavours.

I had to pre-order these lamb ribs and they took two days to come in to the butcher's. Unlike the last time I bought them they were already cut up which was actually perfect for this recipe because I found that they're easier to handle when already cut up and yet don't lose any of their trademark juiciness.

Another reason why these are a pushy recipe if you love lamb is because I was having a very busy day when I made these for my family and they were finished and photographed by 3pm and they were coming at 7pm. I left them in the cooling oven until then and then reheated them slightly and they were still just as perfect. 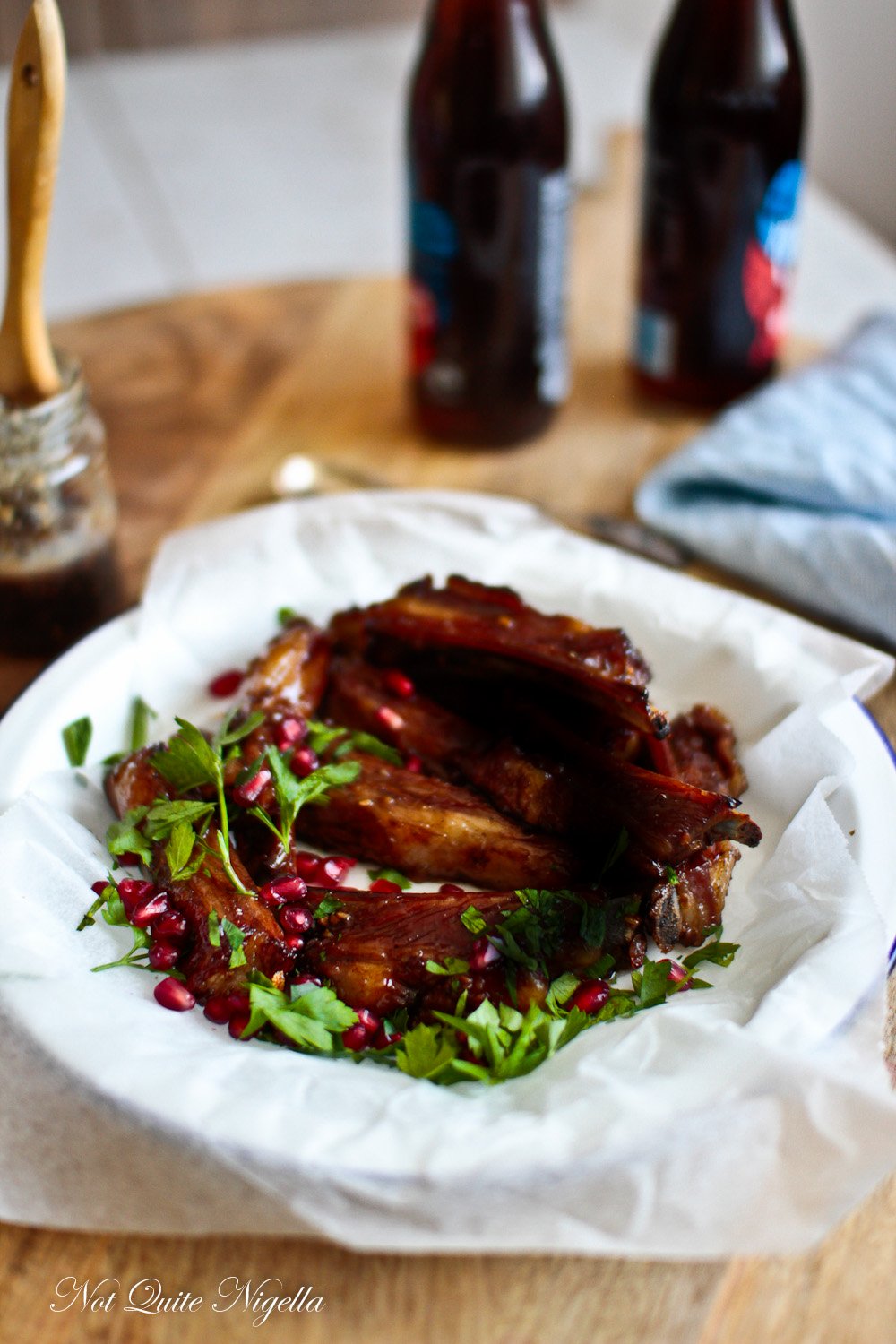 My parents and sister arrived and we sat outside on our tiny renovated balcony. My parents aren't really at one with al-fresco dining but I could see that they enjoyed the cool breeze outside. We balanced plates on our laps and ate lamb ribs with our hands. And at 7:57pm my dad elbowed my mum. "Three minutes," he said. You see my dad is known for disappearing no matter where we are at 8pm on the dot.

If they are having a dinner party he quietly disappear upstairs into bed at 8pm without fail (he goes to sleep at 8:30pm). Nobody will even notice he is gone until half an hour later. But on our tiny balcony he was trapped in the corner and all he could say was "three minutes" repeatedly to my mother. When she ignored him, he looked over the side of the balcony and I had to ask, "Father are you looking for an escape route over our balcony?" to which he smirked to himself which only meant "Yep". We tortured him no more and by 8:04pm they were on their way home.

So tell me Dear Reader, what time do you go to bed? And do you like lamb? Do you have a favourite cute? And have you ever tried lamb ribs? 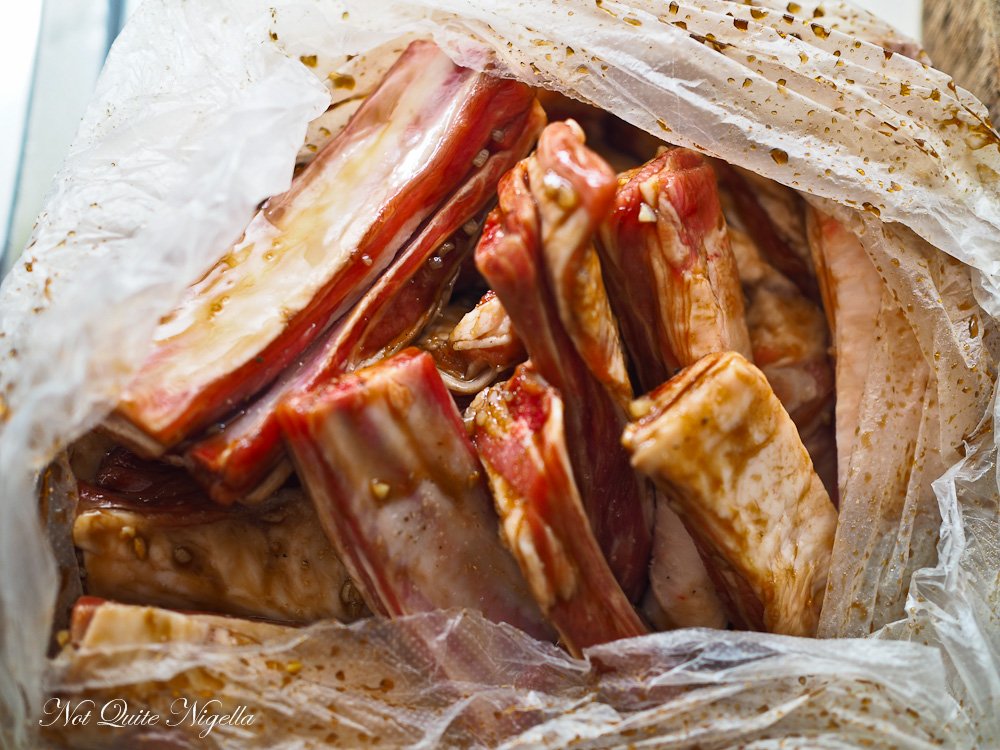 Step 1 - Mix the pomegranate molasses and the 6 cloves finely chopped garlic in a bowl. Marinate the lamb ribs with this mixture for 1 hour. I place it in a bag and massage it. 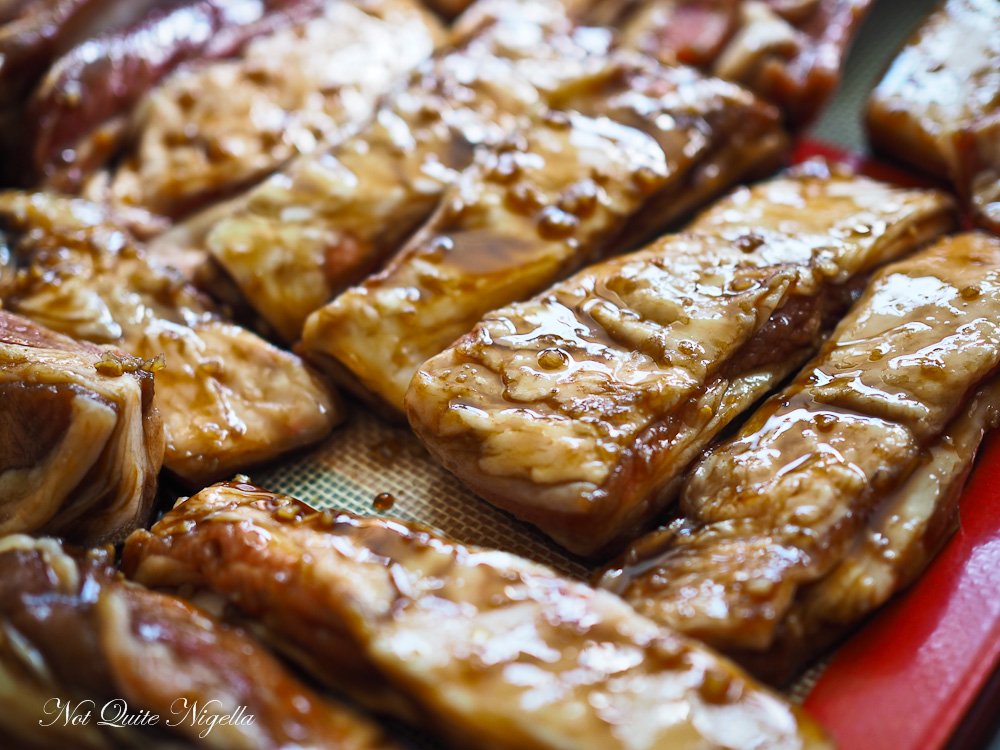 Step 2 - Preheat oven to 140C/284F. Line two (or 1 very large) baking trays with parchment and place the riblets on the tray dunking each in any sauce collected in the bottom of the bag. Roast for 1 hour 15 minutes. 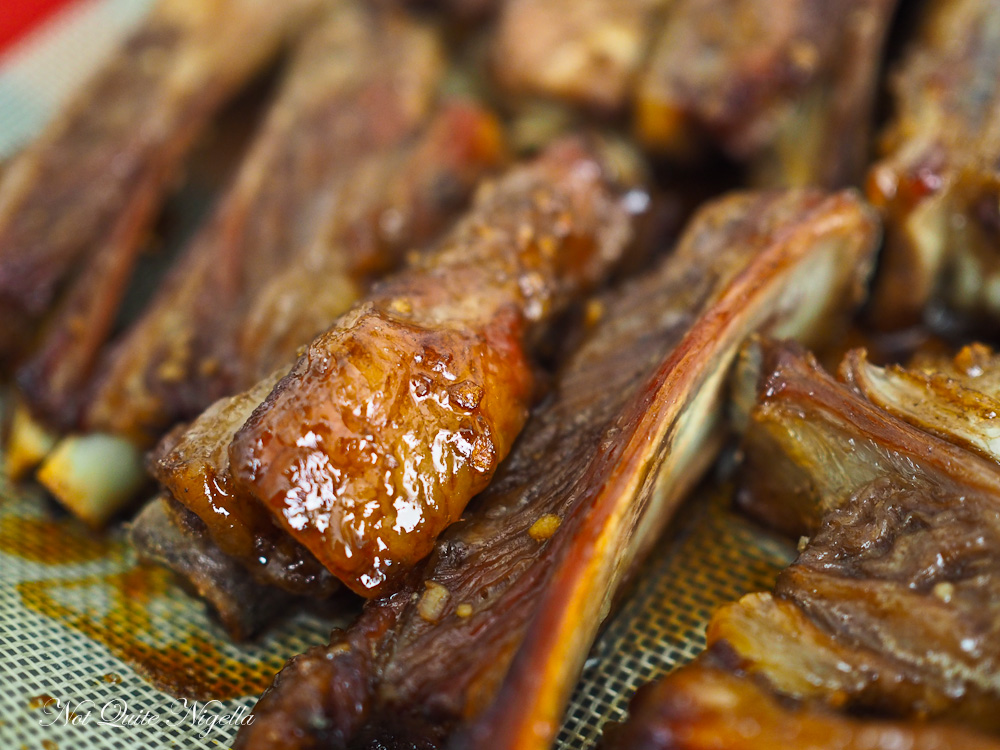 Step 3 - Drain the juice from the baking tray and skim the fat off the top. Mix the remaining juice with the honey, salt, black pepper, 1/2 clove garlic and cayenne (if using) to form a glaze. Increase oven temperature to 190C/374F and baste all of the lamb riblets with the glaze. Roast for 10 minutes. Serve with herbs and pomegranate. 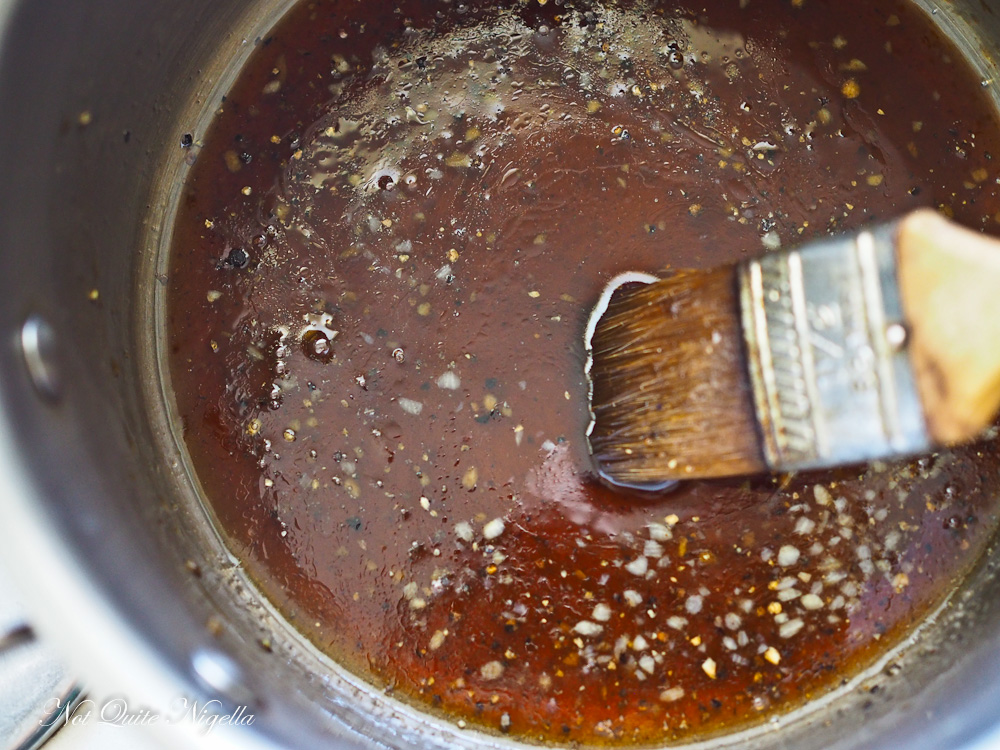 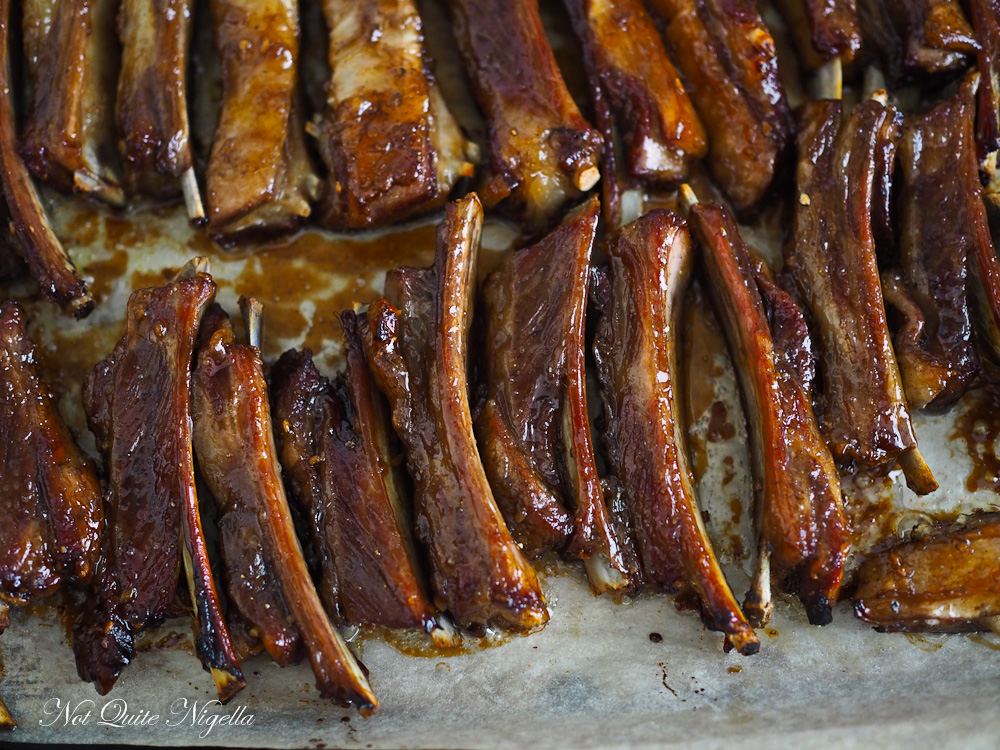