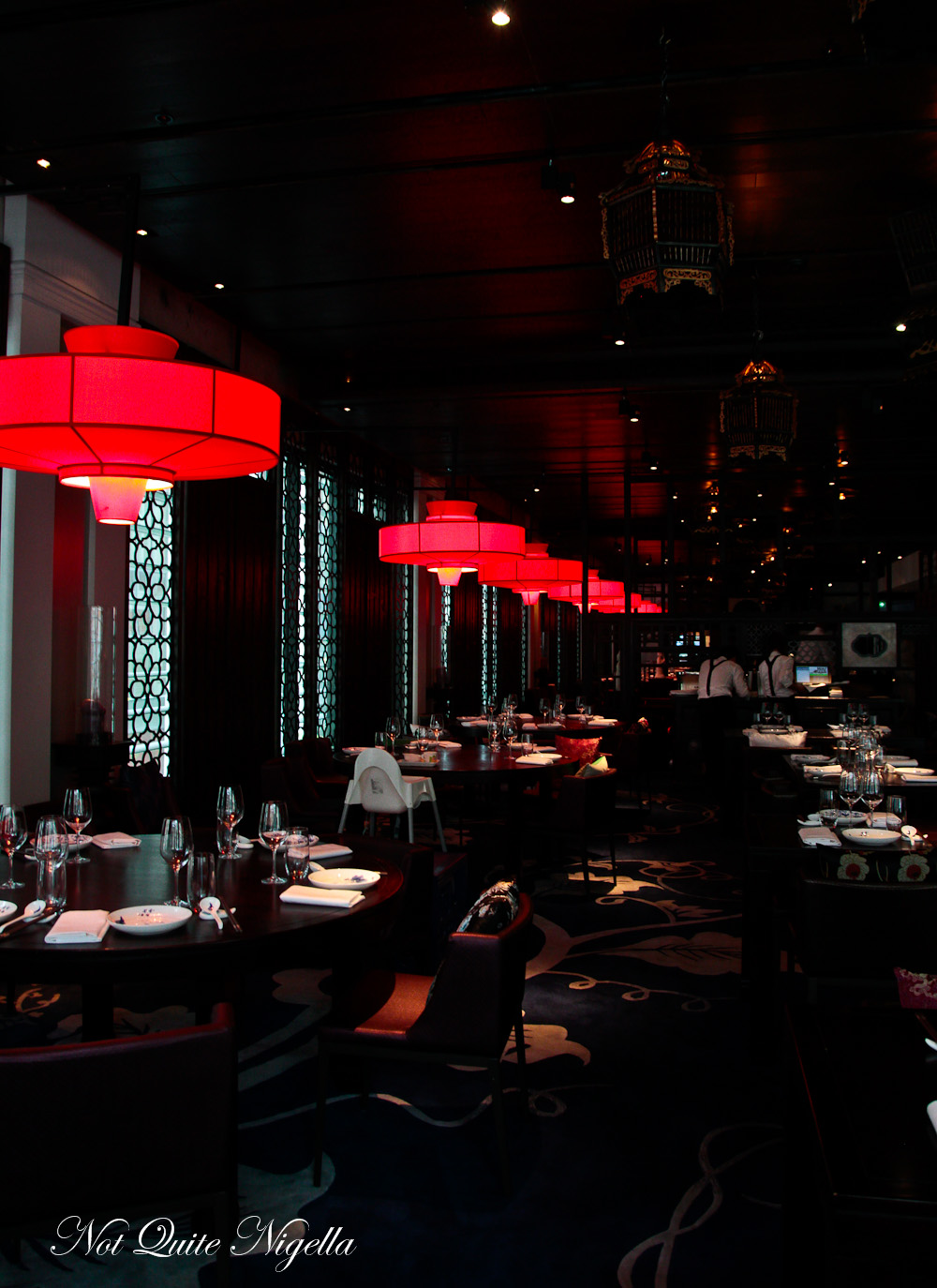 Going out for Chinese food with my family always leads to mild mannered hijinks. Those with Chinese families or friends probably know that opinions come fast and furious and things are observed with eagle eyed vision and critiques offered freely. While my sister was still visiting Sydney from overseas we decided to try another new Chinese restaurant open in 2013: Waitan. 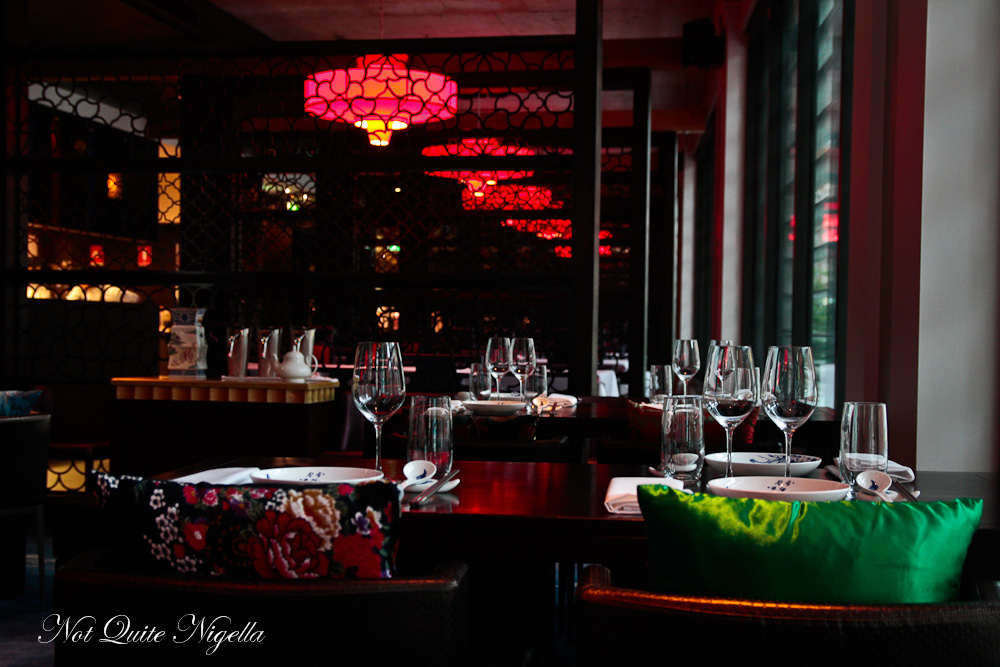 Situated on Sussex Street next to the Sussex Street Food Court, we manage to somehow unwittingly hit a street park as we arrive at 5:58pm. This is a sign of luck for the superstitious among us. My family is also vehemently against paying for parking (except for me when I am stressed and running late but I am the black sheep) and we once drove straight out of a carpark when we realised that we would be paying exorbitant day rates rather than the night rates. "We don't pay crazy prices for parking!" we insisted.

Waitan is known for two things: a $10 million fit-out and bed lounges. Oh and a bottle of $50,000 Hennessy XO Mathusalem too if you are in the market. We walk up to the door and are greeted with two smiling staff members. One takes us up to the escalator to the restaurant where we are handed over to the maitre'd. As it is so early the staff seems numerous and we are shown to a table. My mother nods her approval. "A round table...good luck!" she says. 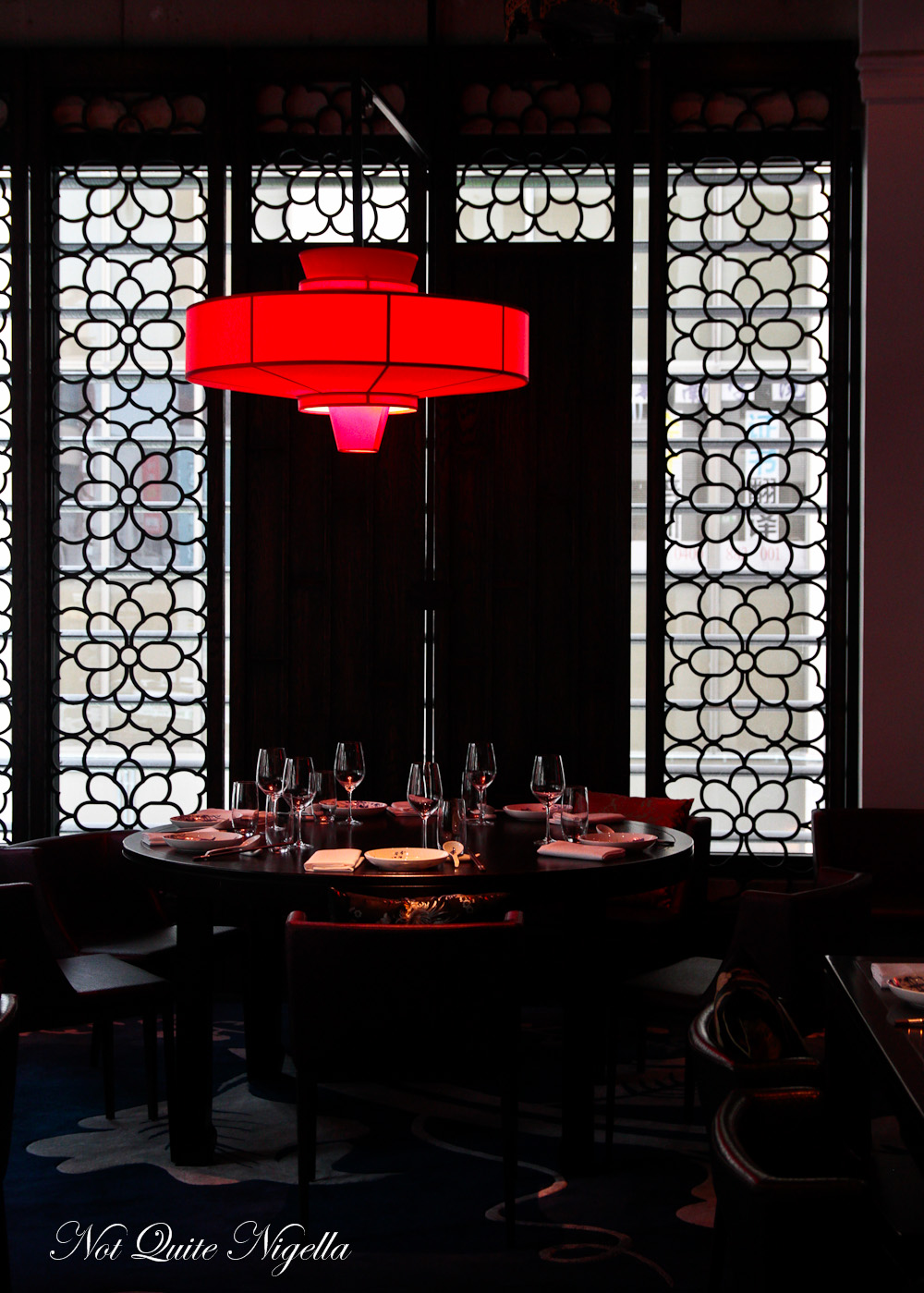 Waitan means "out of the Bund" referencing Shanghai's waterfront Bund area. The room has plenty of dark carved wood panels but softness is from mismatched embroidered cushions, comfy chairs while the lighting is dark with glowing red lights and satin cushion backs. 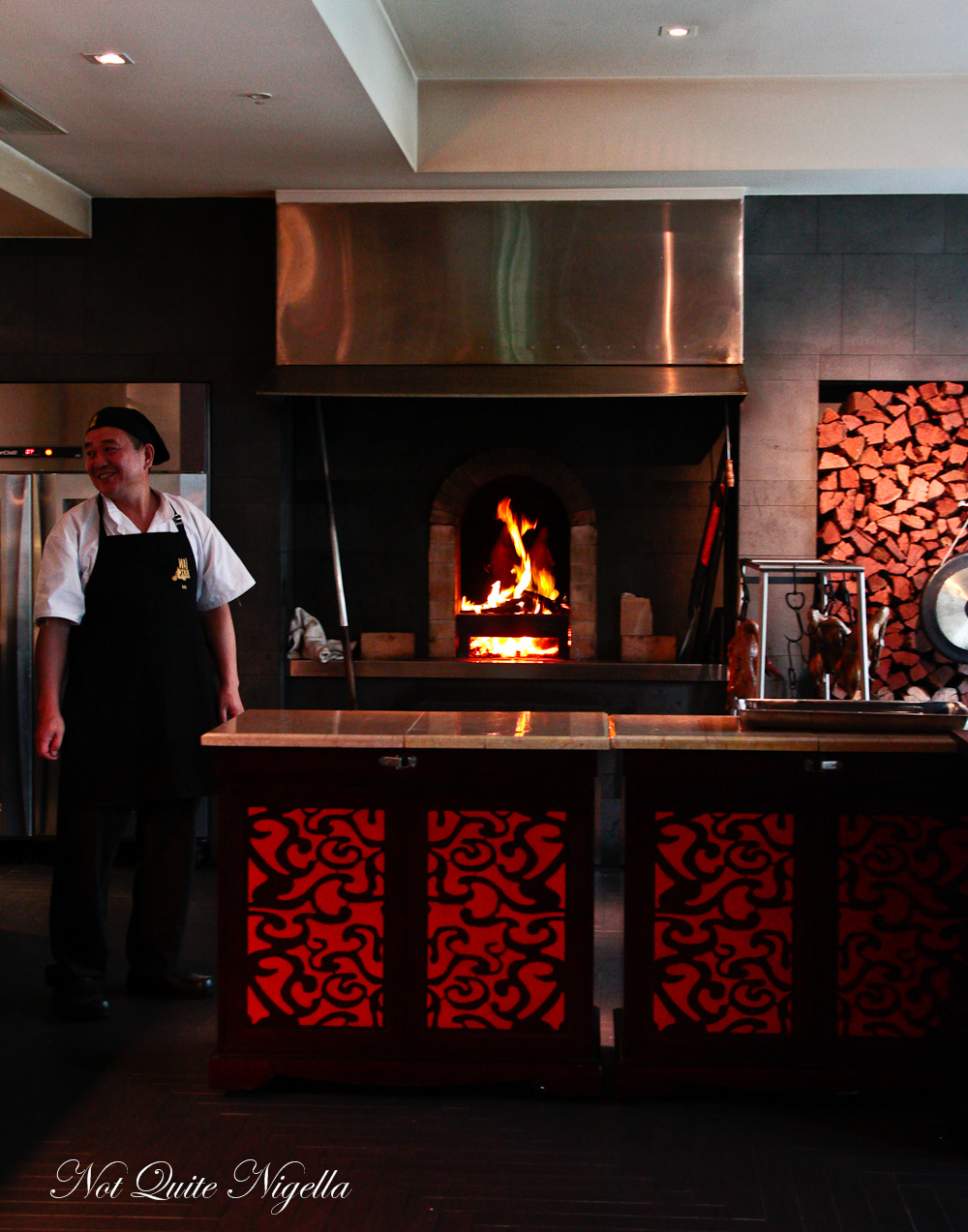 A custom made duck oven stands alongside the open kitchen. Piles of cherry and oak wood for the duck oven are from the Hunter Valley. The duck master stands in front of it and next to it is a gong which is supposed to rung when a duck is sold. A display of wagyu beef sits in one fridge while live seafood awaits its fate in a series of tanks. 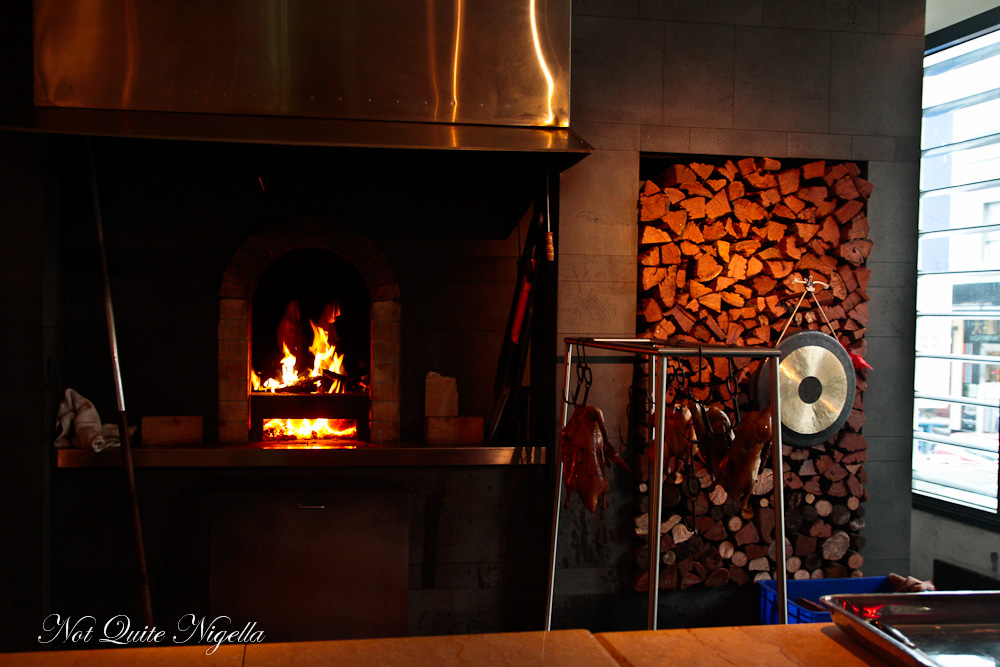 Service from the Chinese waitstaff is very friendly and personable although there are a couple of suited staff members who are superfluous and indifferent. I overhear one berating a staff member loudly when I go to the bathroom which is uncomfortable to hear. 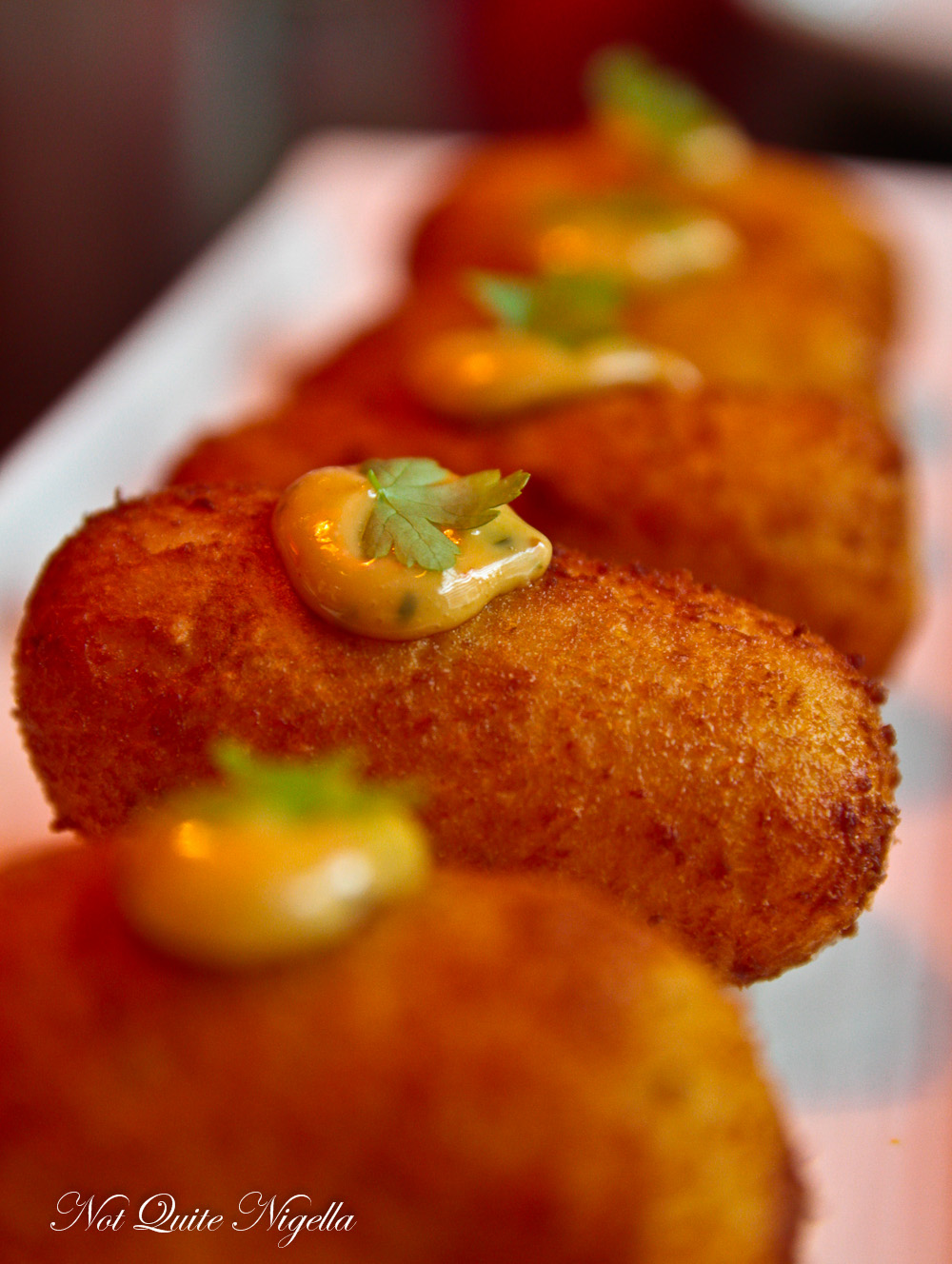 The menu is not just Chinese but also Malaysian and a couple of other Asian countries. There is no problems with upsizing the dishes to accommodate the five of us. The first bites come out and since we are the only ones here, these come out at a good pace. The crab croquettes manage to capture the exquisite richness of crab while just holding together underneath the golden crumb coating. The chilli basil aioli is light on the basil and stronger in the chilli. I could eat a whole plate of these. 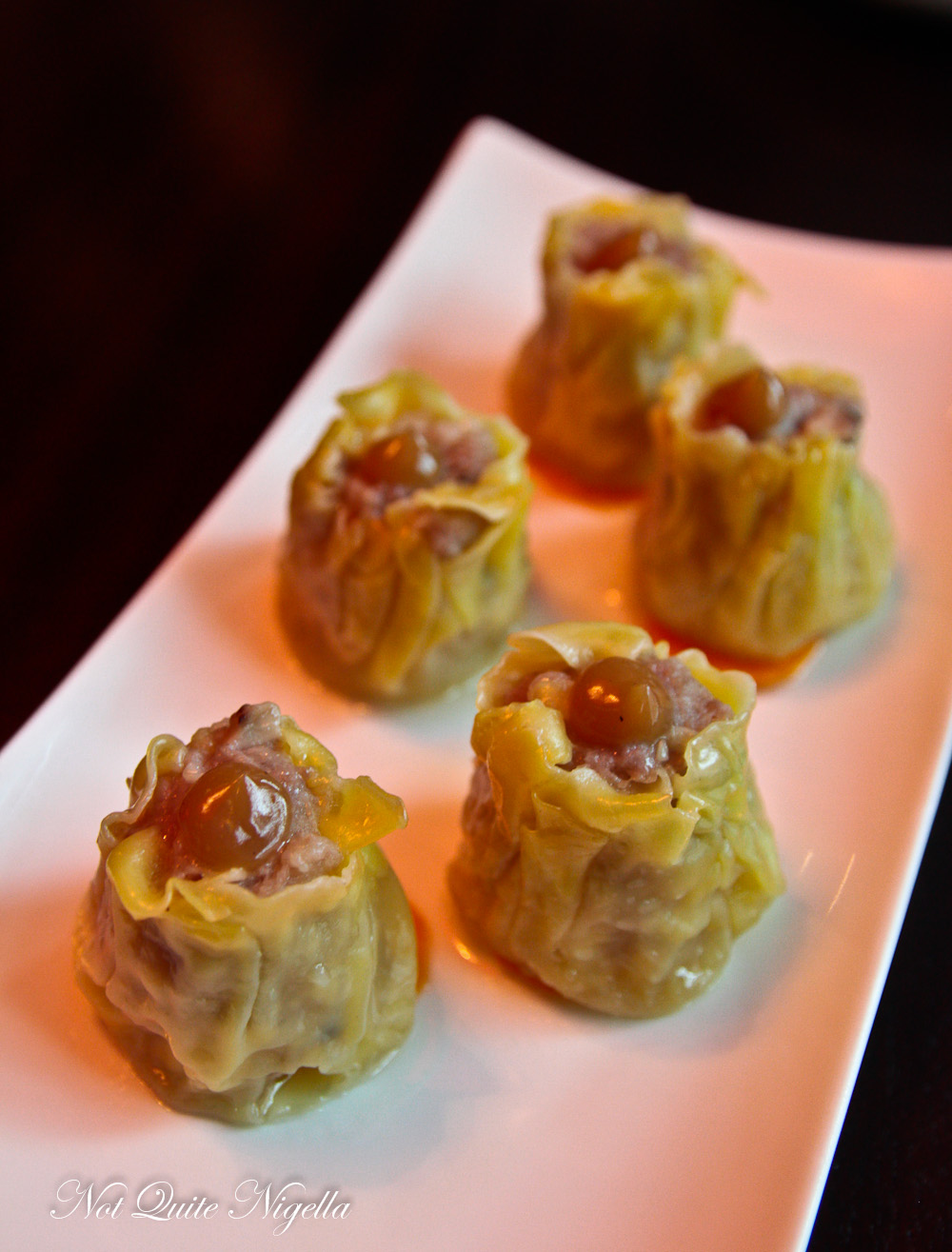 The smoked pork shumai doesn't shy away from an intense smokey flavour. The plump shumai are given an almost European smoked pork flavour to them and they're good. Even my father who shuns change likes these. 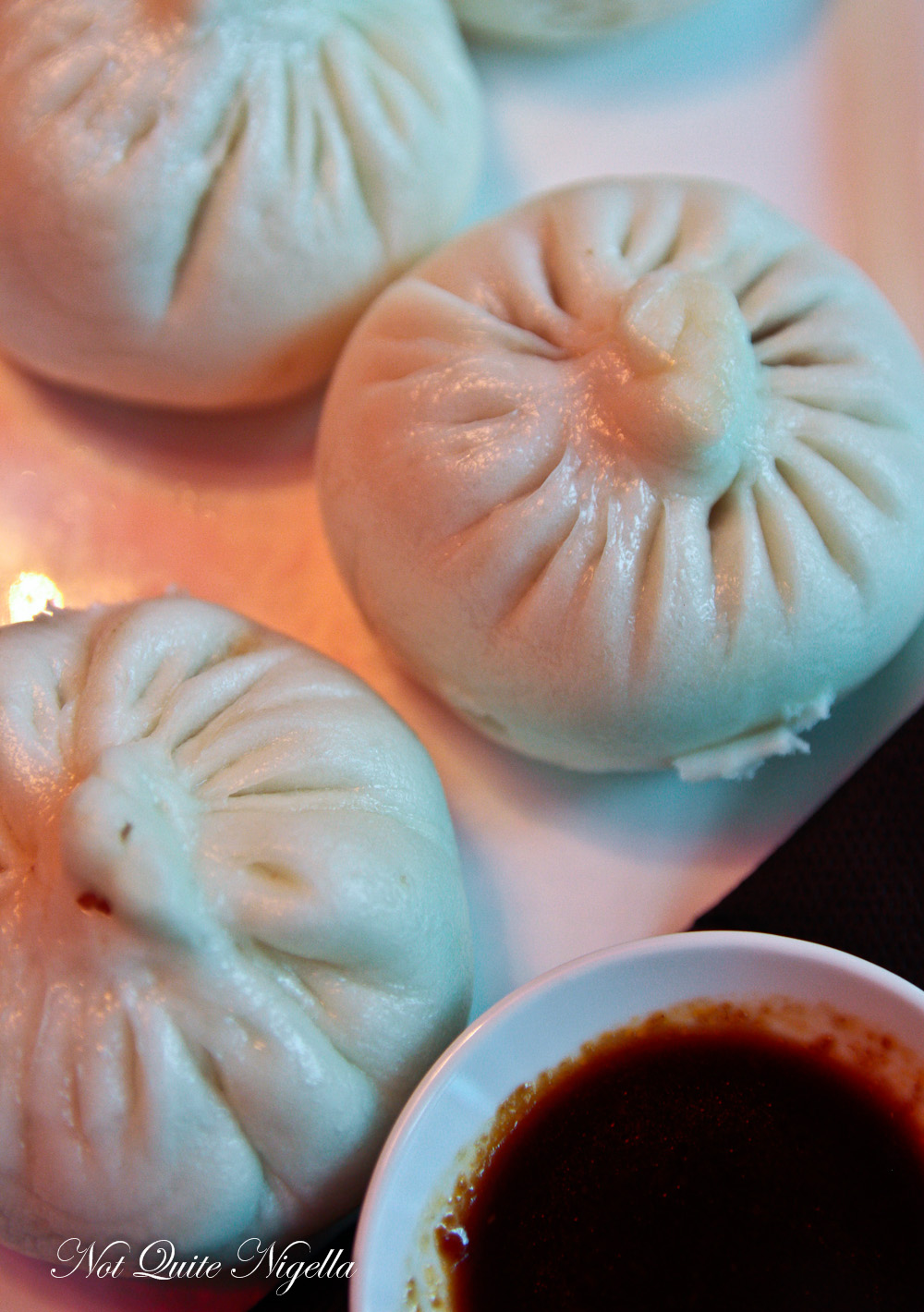 The beef cheek steamed bun remind me of the street food that I recently ate in Shanghai. These however are not filled with pork but very soft, tender beef cheek. They come with a sweet, spicy dipping sauce that adds a hit of flavour. 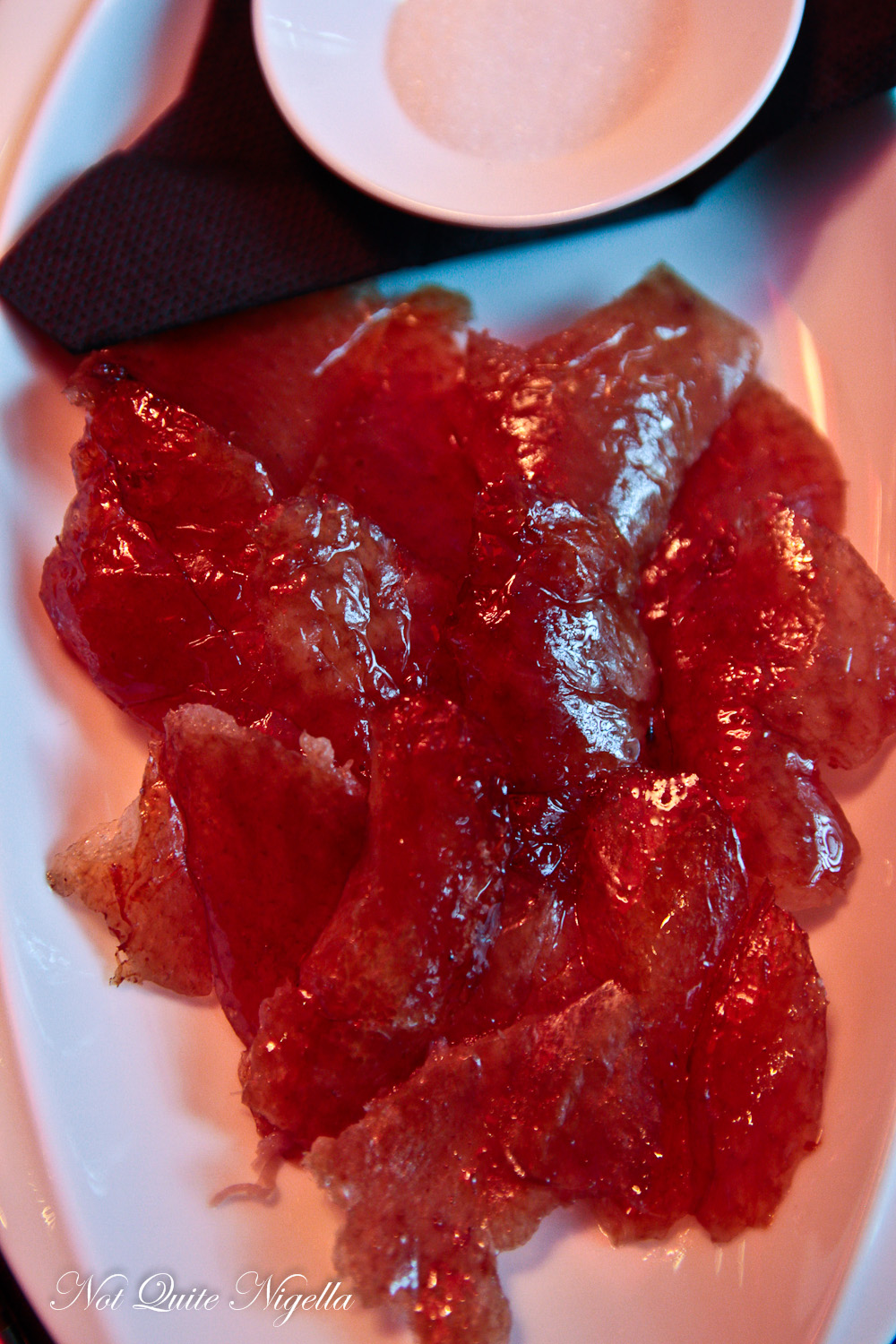 It seems as though many of the restaurants in Sydney have decided together that the price of Peking Duck is now $88 for a whole duck which is a big order especially when my parents have such opinions so we order half a duck. There are three courses with the Royal Peking Duck with the first course of just the lacquered crispy skin with a small pot of white sugar. It's at this point that I wished that we had ordered the full duck because the skin is gloriously crispy and dipping it in the sugar intensifies the flavour. 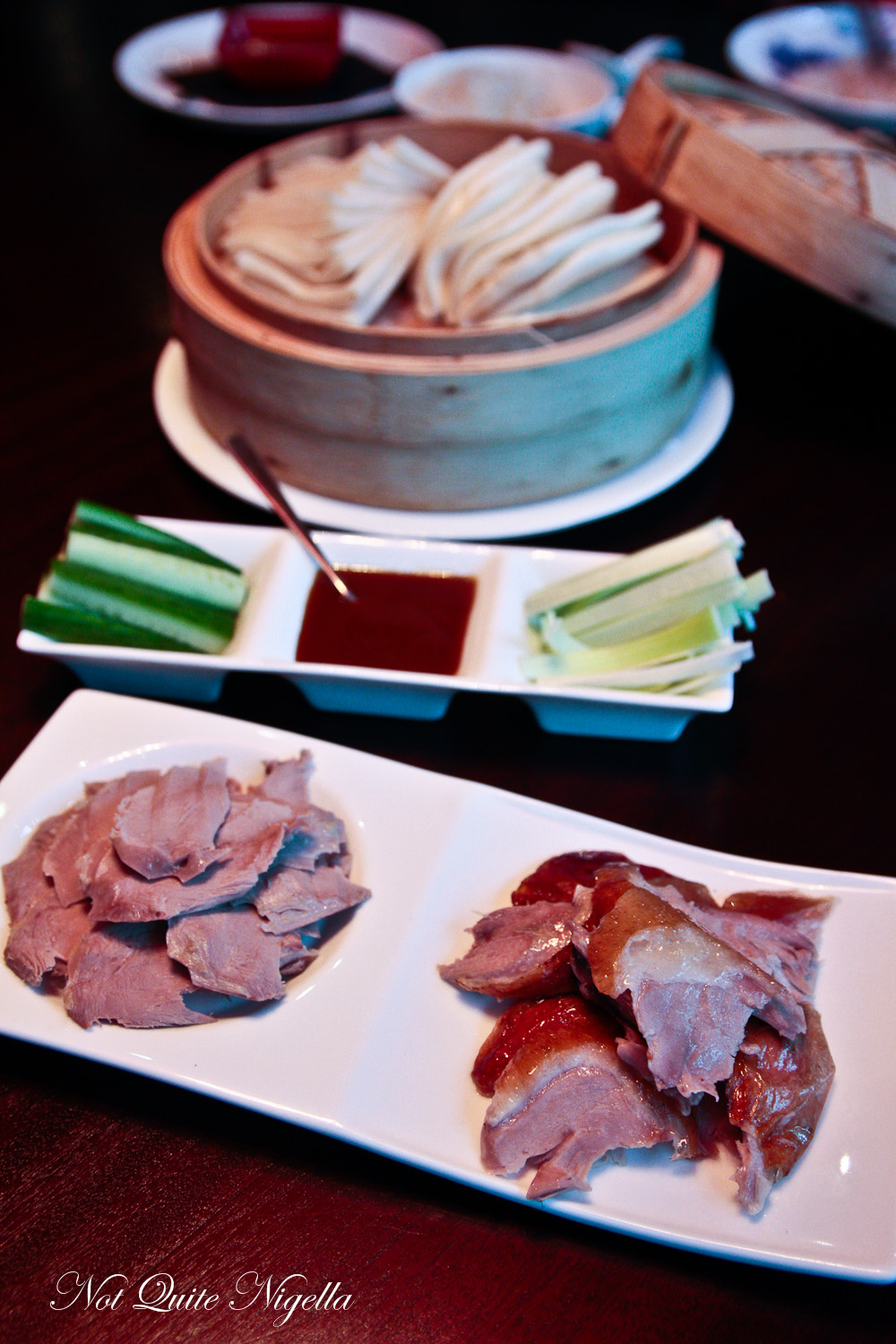 The second and third courses come out together. The second course is the duck meat only without skin which we are to place inside one of the five steamed fold-over buns. There is hoi sin sauce, cucumber and spring onion to add to it. The third course is the meat and skin which is to be wrapped up in the paper thin crepe like pancakes. There are double the amount of pancakes and not quite enough cucumber and it's really more two courses than three just with two types of wraps. 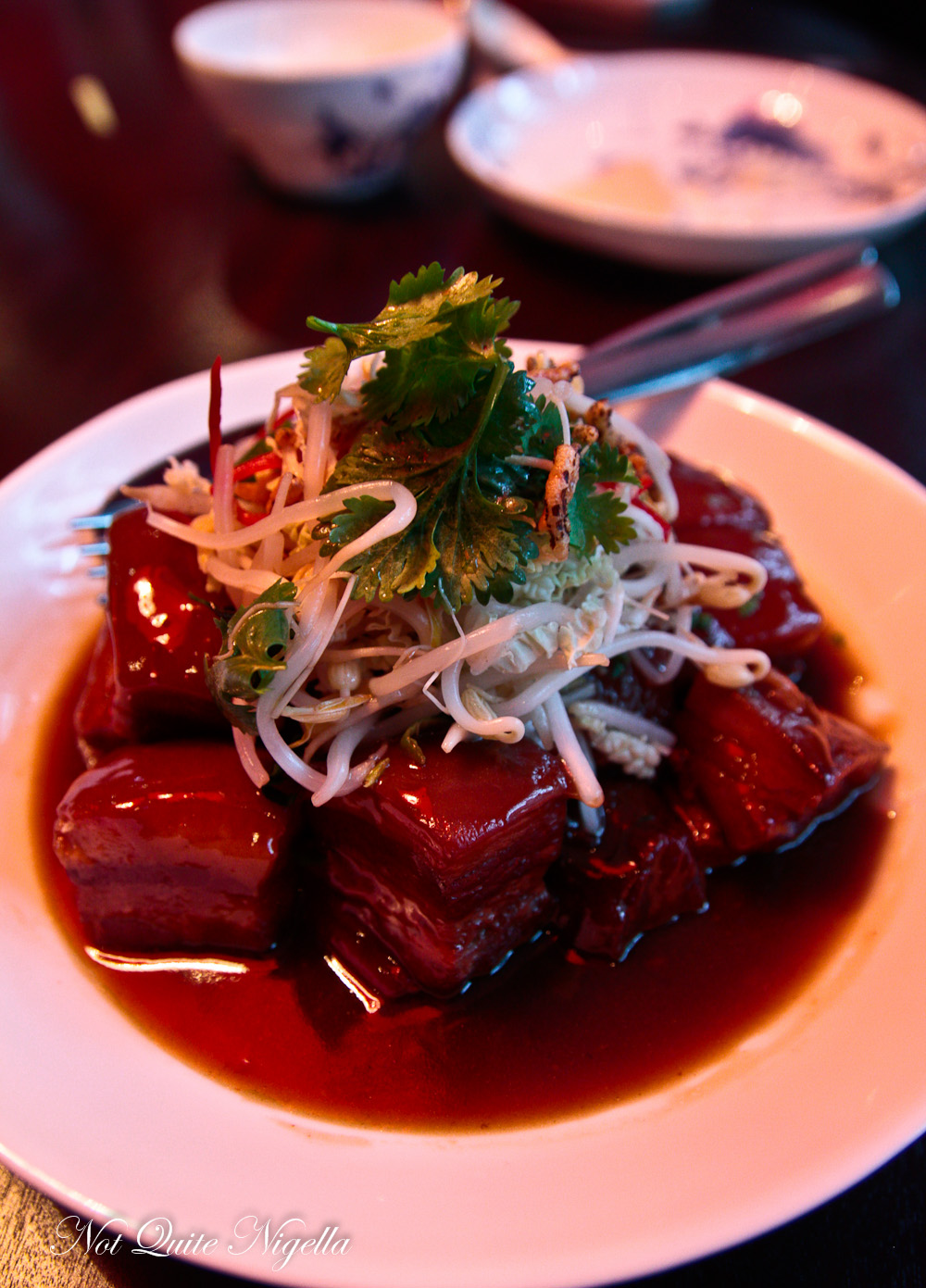 After a lull as the restaurant becomes busy, the mains arrive. The pork belly reminds me of the red steamed pork belly cubes that I made a couple of years ago. The dish is a good size and the sauce is sweet as befits a Shanghainese dish (which tends to favour sweetness). 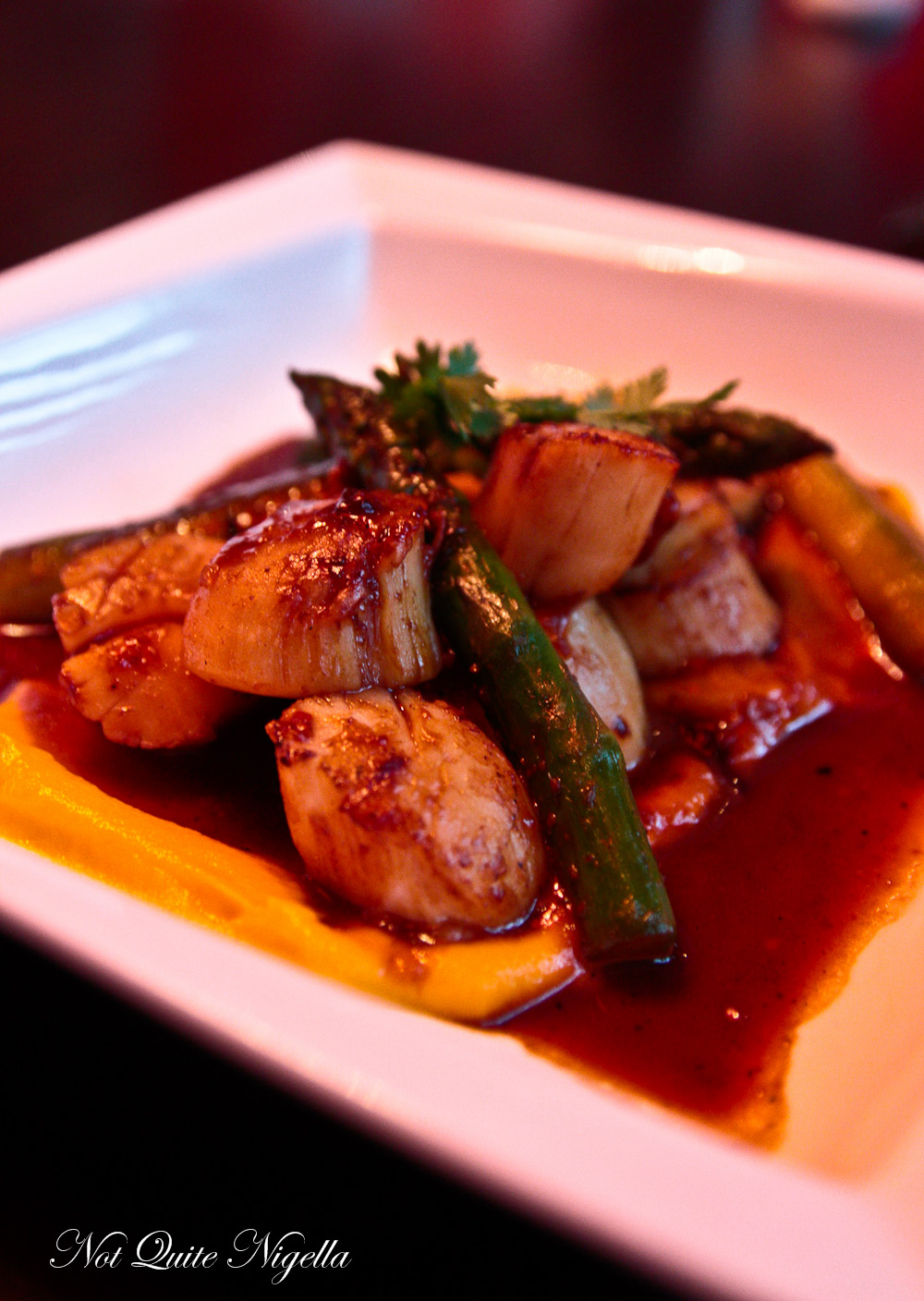 I was expecting something entirely different from the scallops. I didn't expect scallops to be sitting on pumpkin puree which completely dominated any sort of XO flavour with its sweetness. 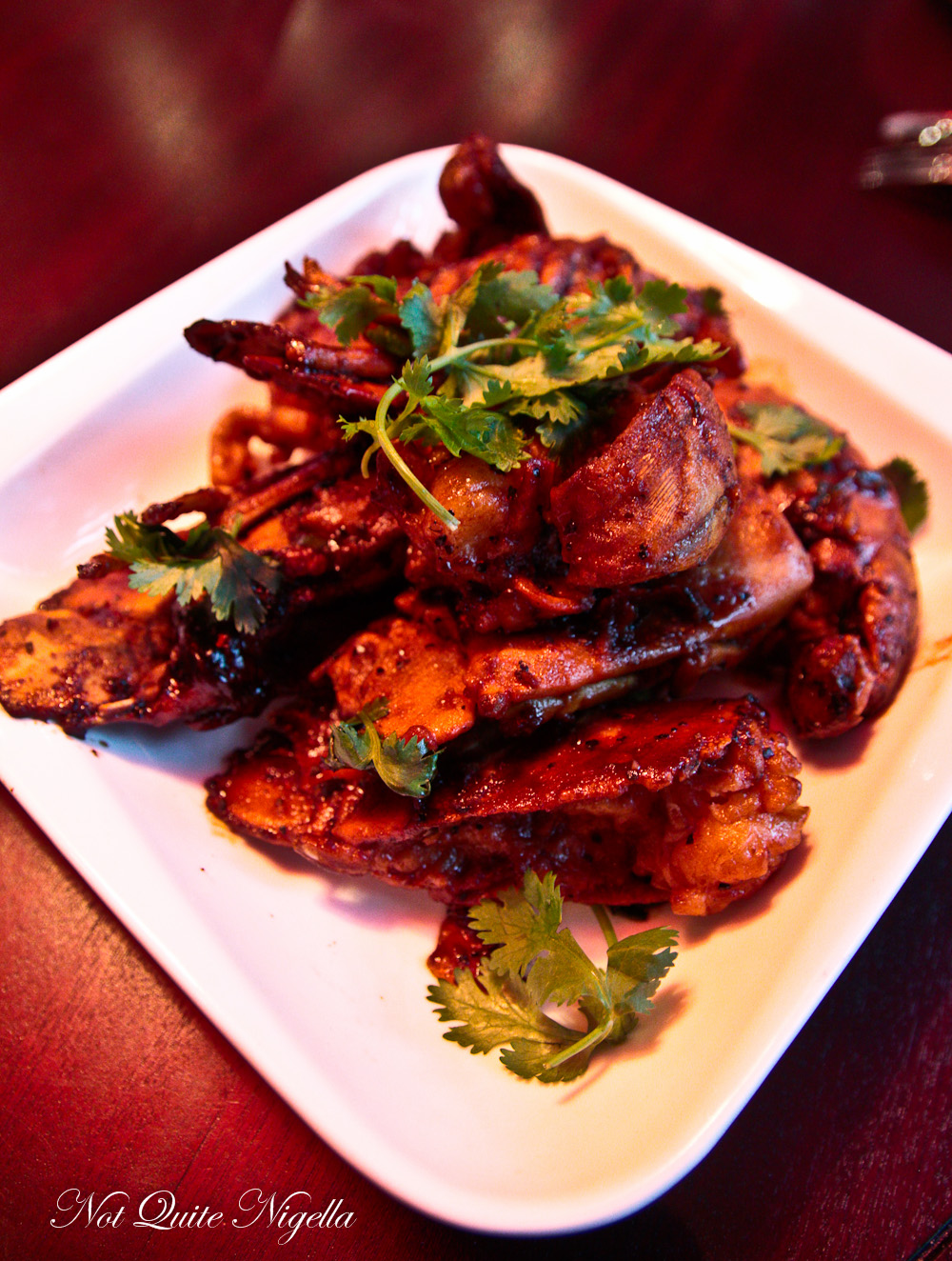 The Moreton bay bugs have a good flavour to them and there are seven pieces in the serve. In all but two there is just a tiny amount of meat to extract (Moreton bay bugs don't have a lot of meat and overseas readers, they're a type of seafood, not an actual bug ;)). So while the flavours were good, there wasn't a lot to this dish. 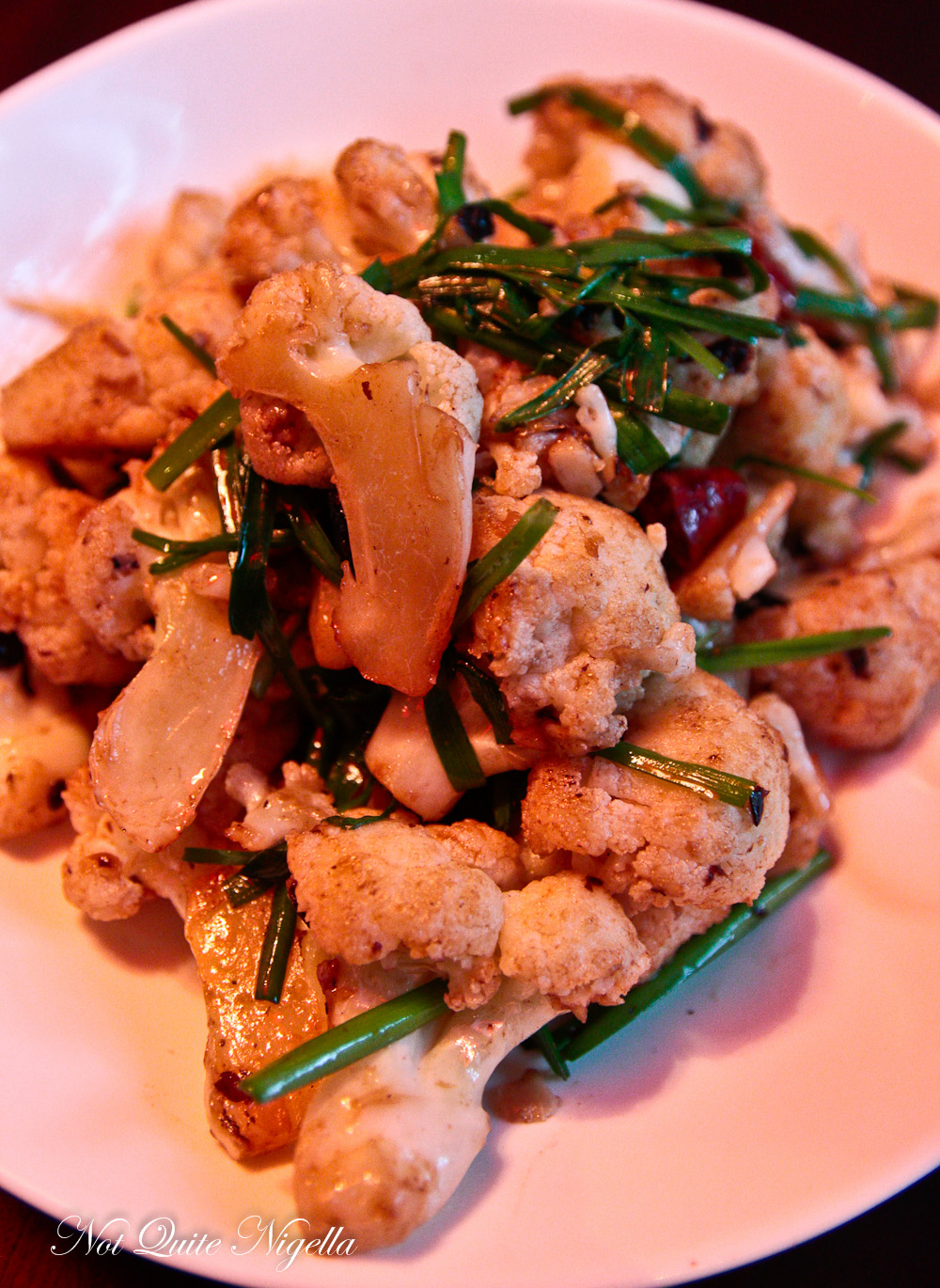 One doesn't usually expect the cauliflower dish to be a stand out but here it is. Said to be spicy and sour it's certainly spicy but it's also sweet. None of us find it sour but it's a good dish with caramelised cauliflower, chives and chilli. 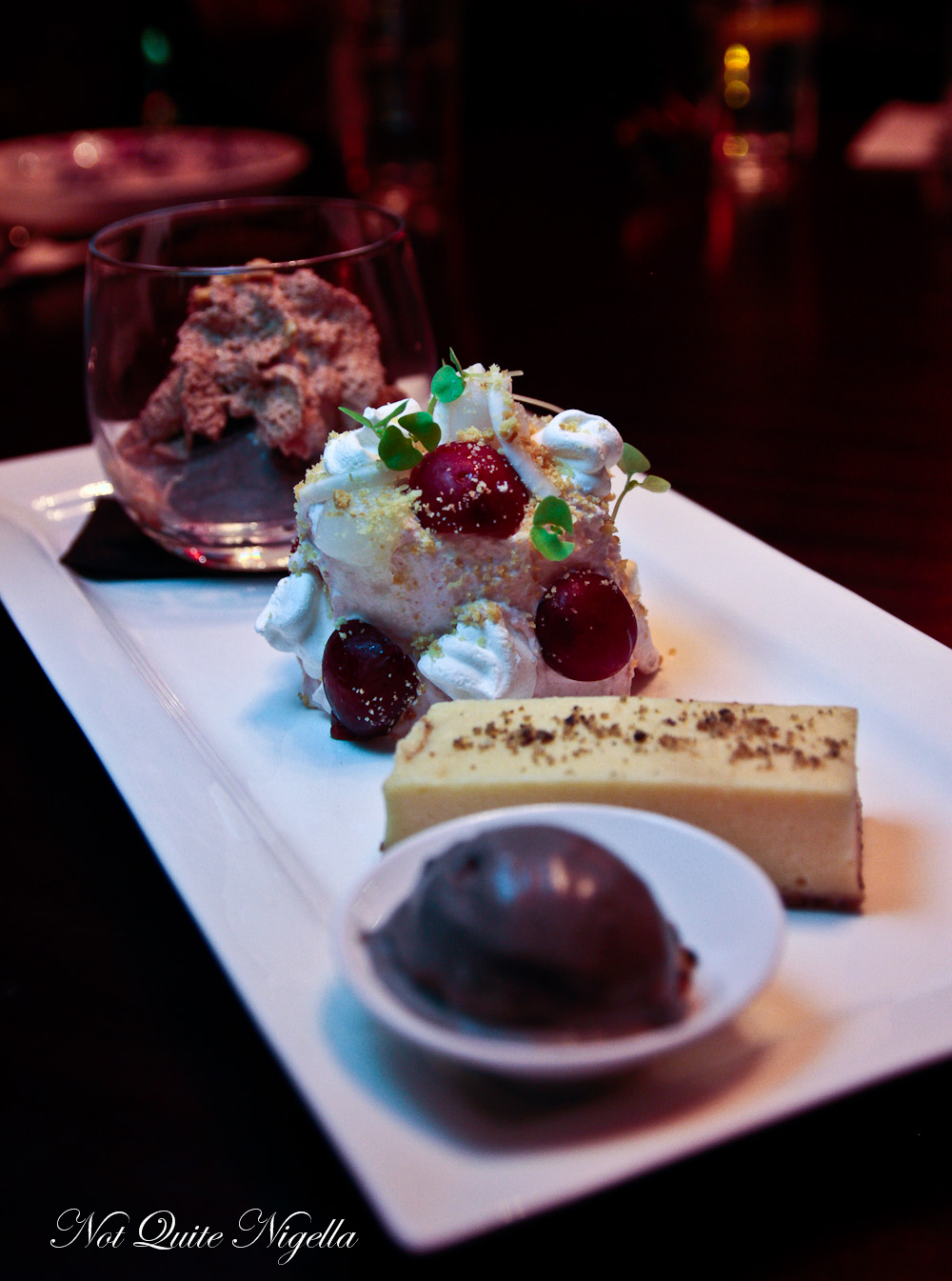 There's no fruit at the end of the dinner but a dessert menu. The dessert platter features three of the four desserts and is meant for two but between my mother, sister and me, it's just the right size. There's the cherry & coconut pavlova with lychee and longans which is fresh, light and not too sweet. The miso baked cheesecake is strong in miso although interesting and served with a fantastic black sesame ice cream. Last is the sundae in a glass made up of black bean fudge brownie, red bean ice cream and crunchy little bits. You have to fish around in there to get a bit of everything but it's worth it. 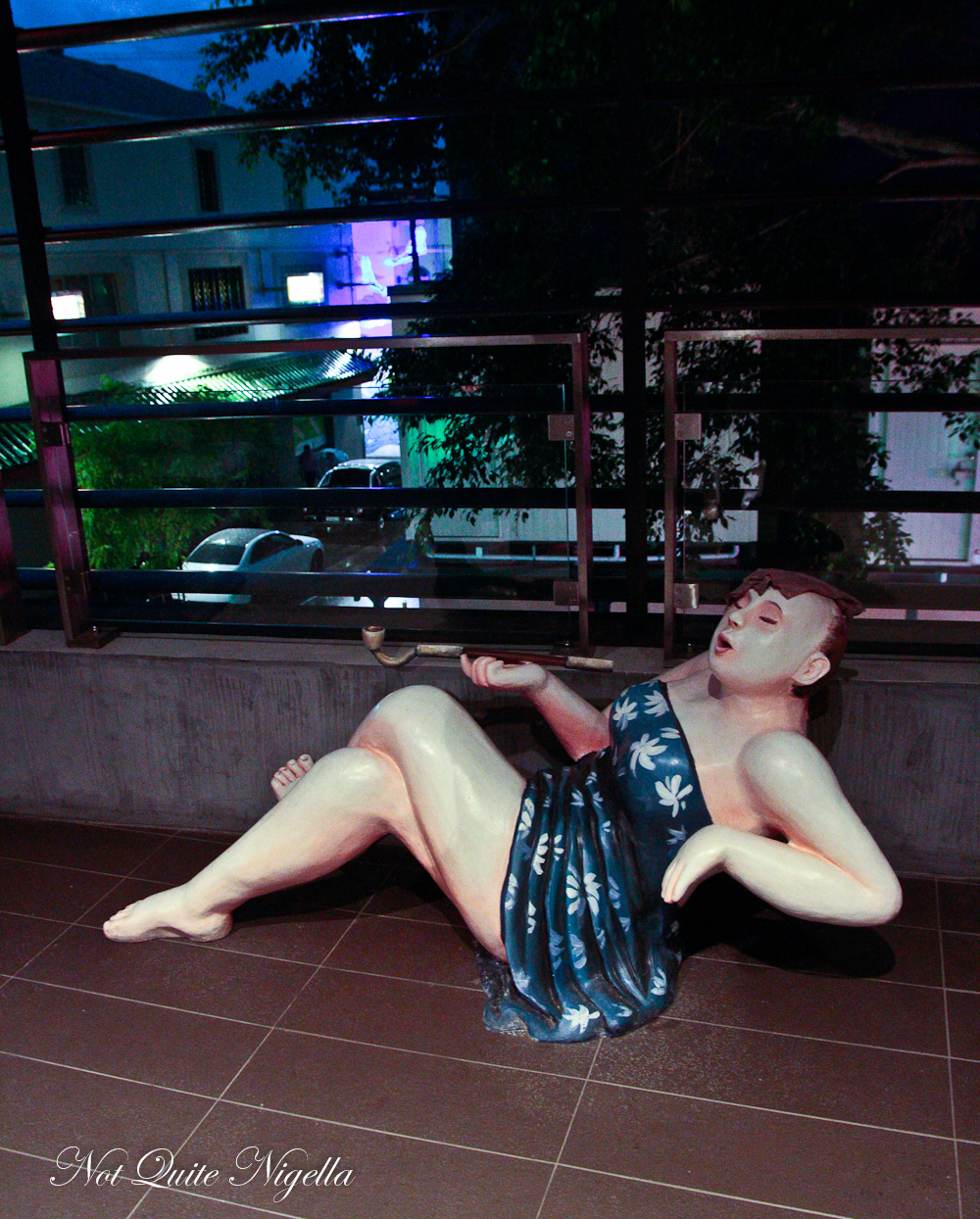 We ask about the room with the beds. These are in the Q Lounge which is past the bar. On one wall is a row of square canopy beds which chairs and tables line the other wall. Alas this is just for snacks and drinks although we are told that when the restaurant gets full, diners can eat dinner in here. 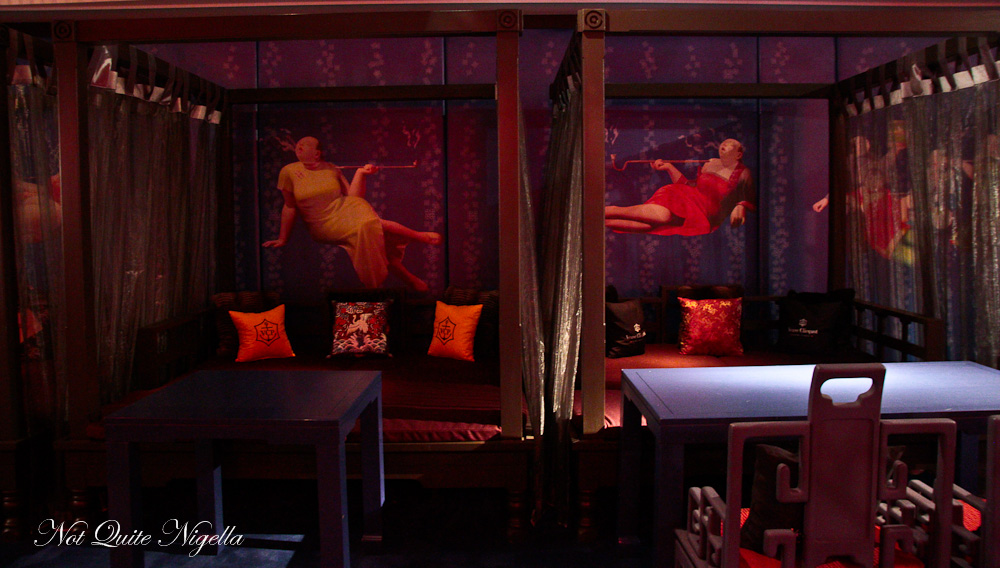 So tell me Dear Reader, will you be celebrating Chinese New Year this year? And have you ever tried duck skin dipped in sugar? Did you like it? And would you prefer to eat at a table or on one of those lounge beds?