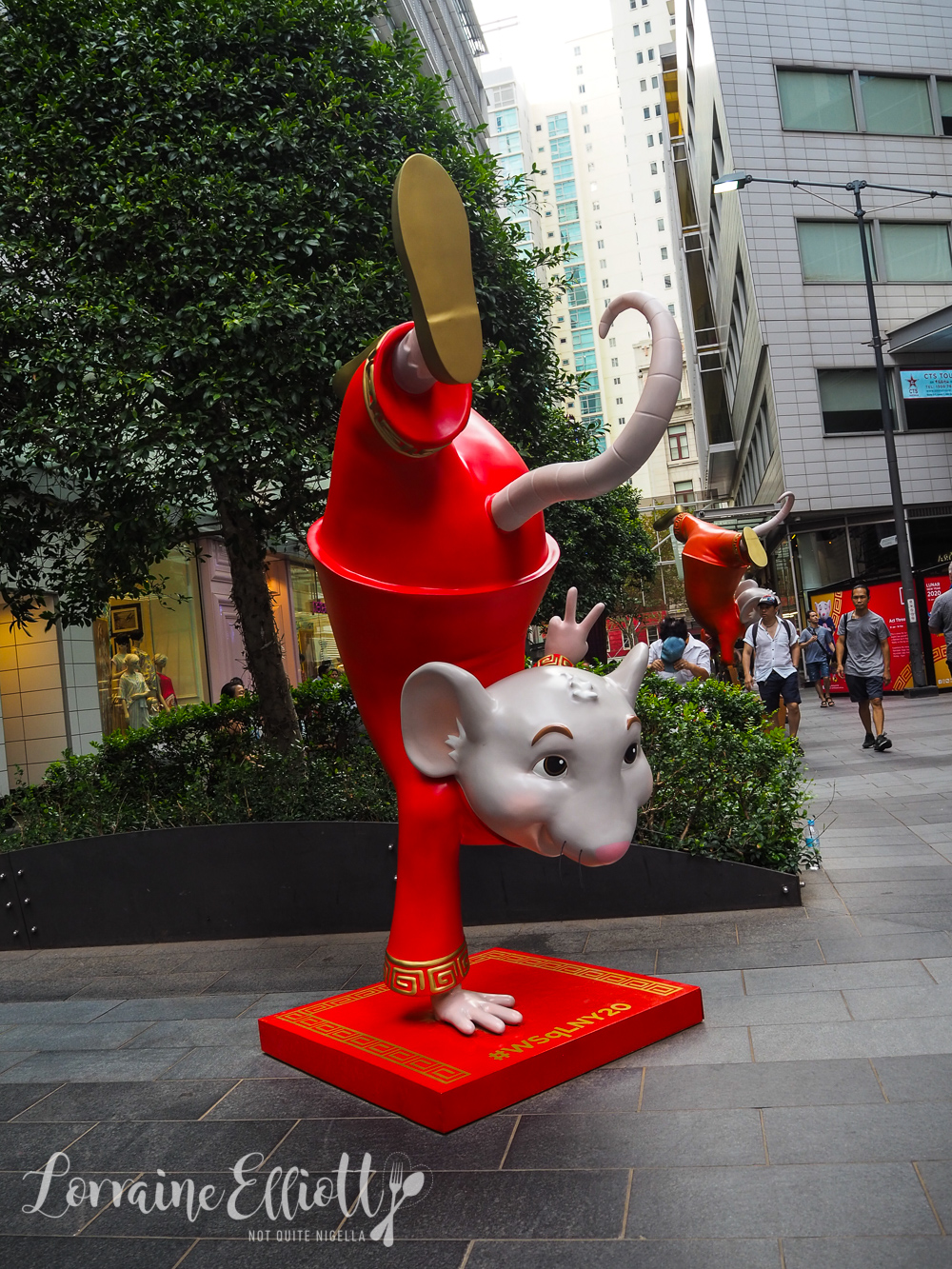 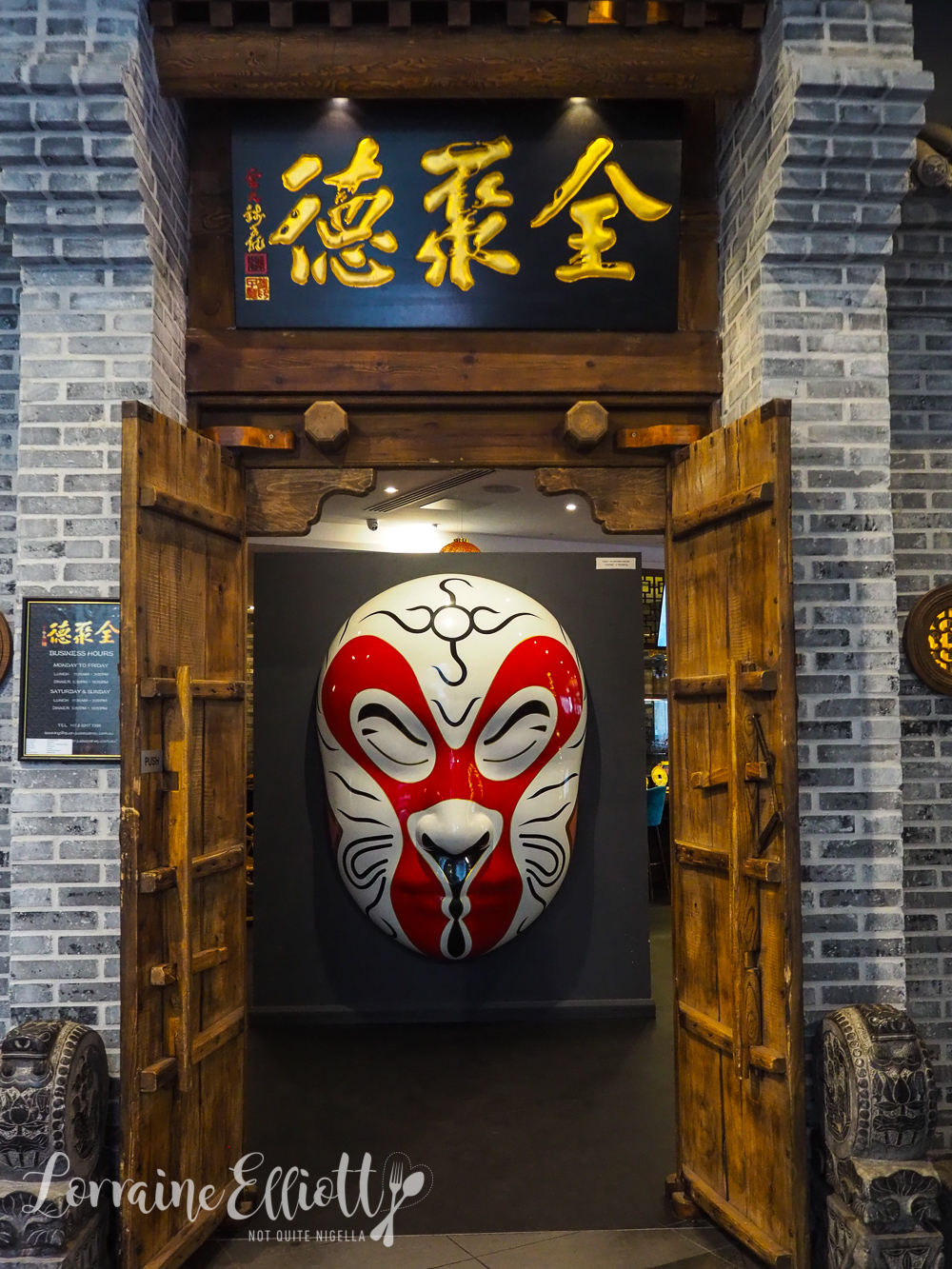 This time of the year is overwhelming. You've just recovered from Christmas and NYE and then on the same weekend is Australia Day and Chinese New Year. However at least with Chinese New Year you have two weeks in which to celebrate it. 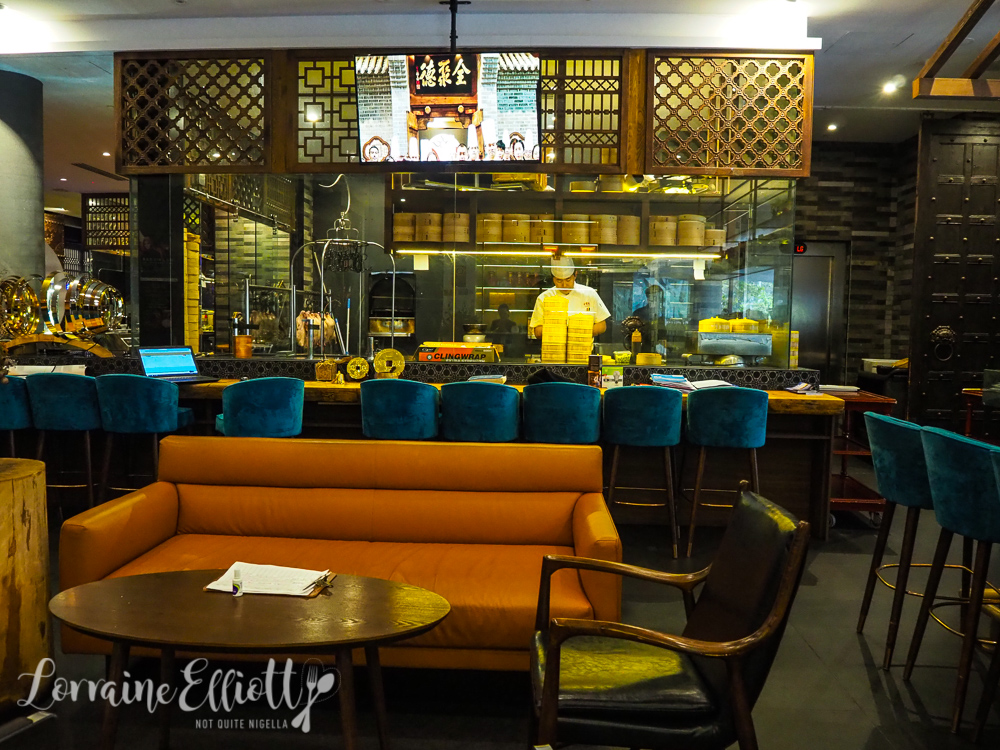 We've been to this location twice already and both times it was a Chinese restaurant. Quanjude is a two storey restaurant and the upper floor is quieter although not ideal for photographs as the windows have a strong yellow tint to them. Quanjude means flawless togetherness. 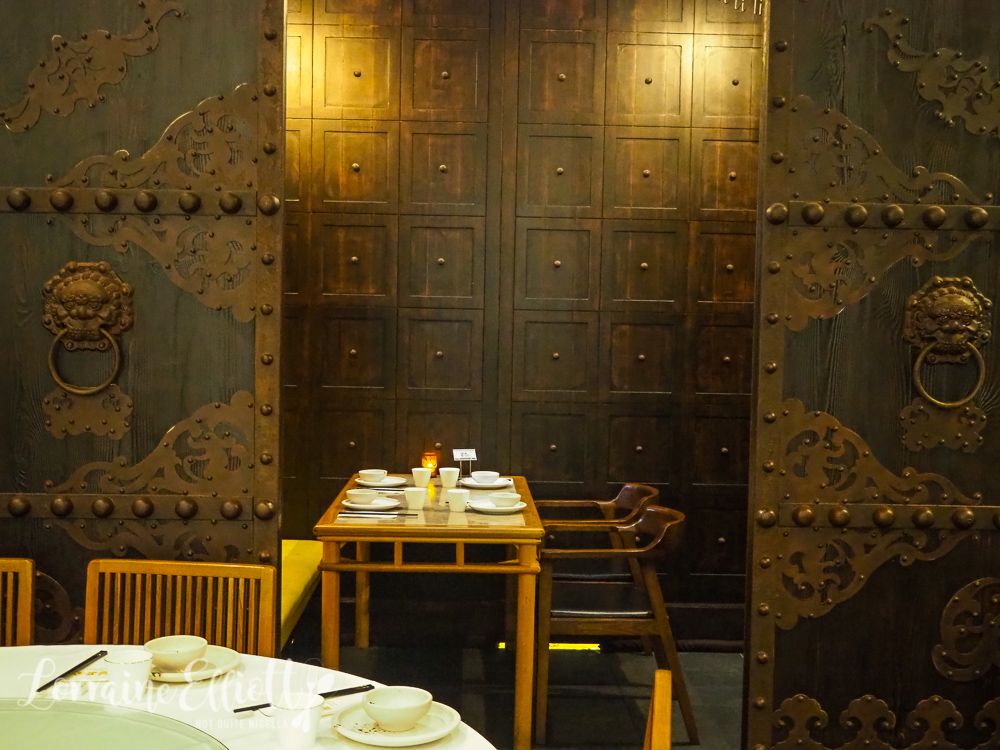 They've got a special Chinese New Year set menu for this period and unlike Western style restaurants where a set menu is priced per person, the menu is priced per table and is designed for groups of 4-6 (although quite conceivably this could feed 7 or even 8). 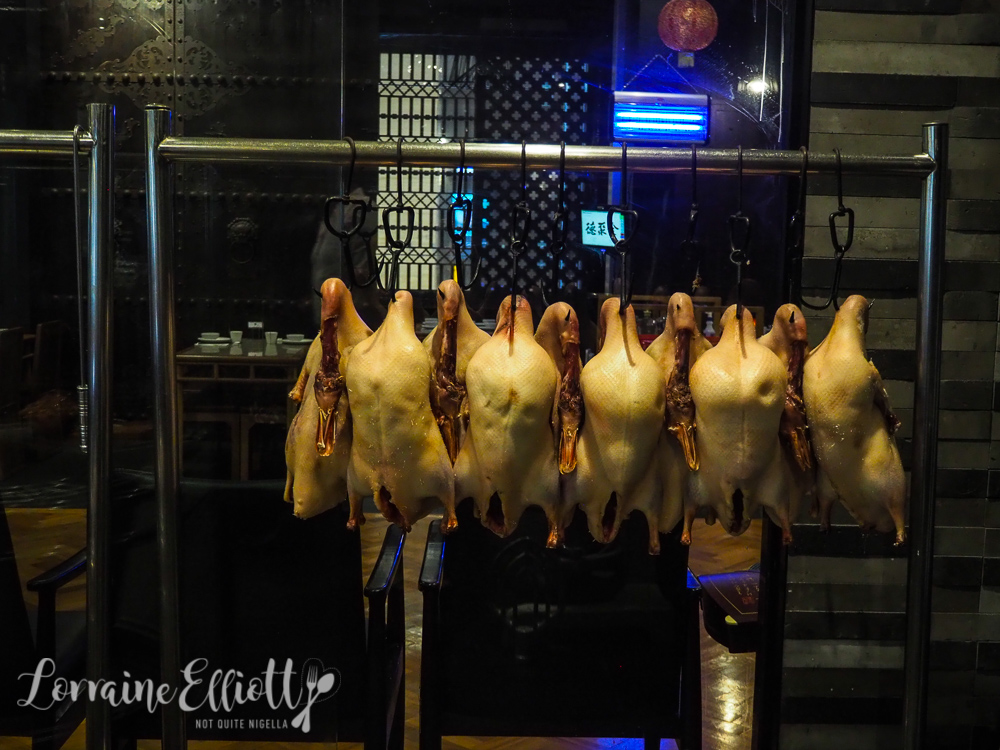 We have the Lucky Star menu for $568 that features a lot of the lucky Chinese New Year foods like noodles, whole fish and pork with fat choy. This menu is available until the 8th of February when Chinese New Year finishes. 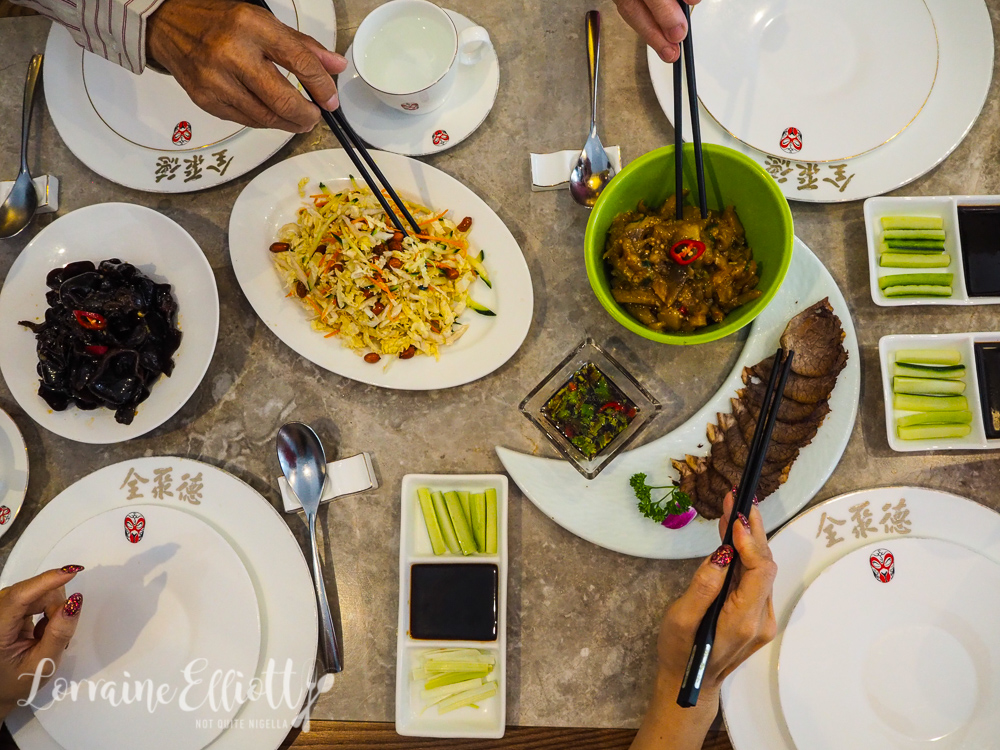 They set down the first dishes and I had expected small servings on a shared plate of the cold entrees, not four separate dishes covering the table. The first is black fungus mushrooms with garlic, vinegar and chilli. The second is a spiced mashed eggplant dish with garlic. The third is a delicious crunchy cabbage, carrot, coriander and peanut salad which is fresh and tasty. The last is beef slices with a dipping sauce. 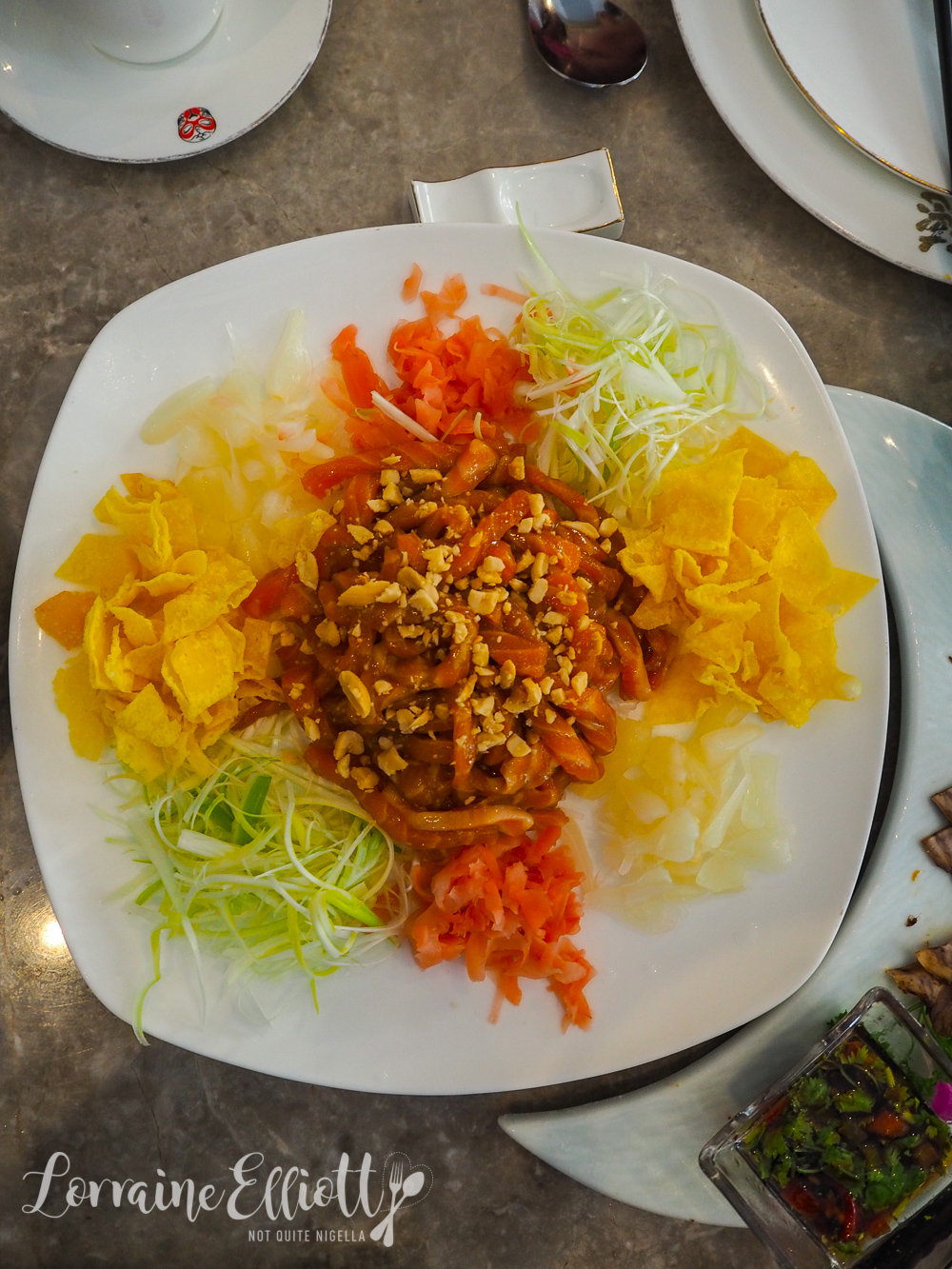 A common dish at Chinese New Year celebrations is the Yee Sang salad which at its heart is made of sashimi salmon, won ton pastry crackers, daikon, pickled ginger and spring onion (others add pomelo and apple to theirs). 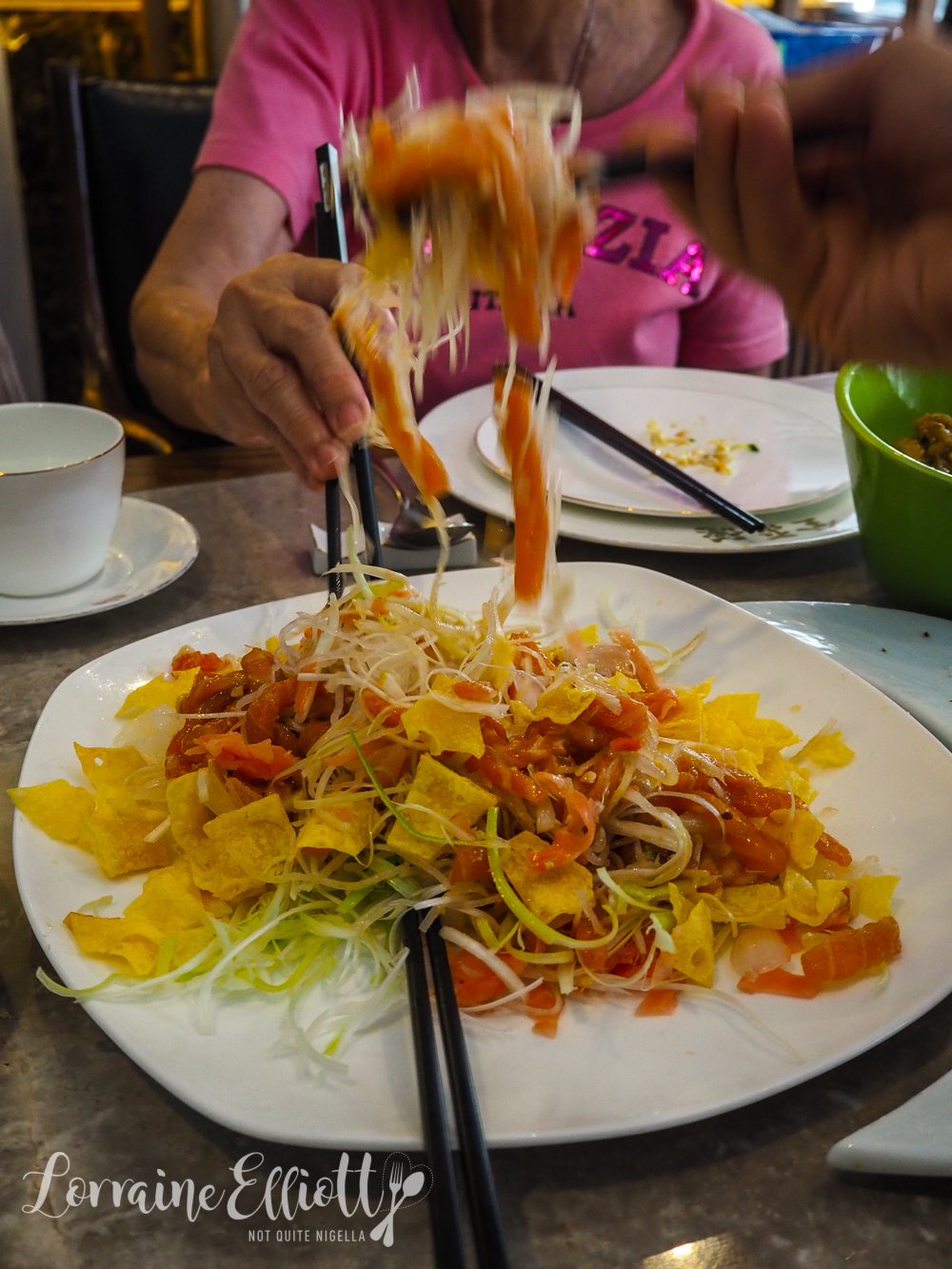 The idea is that you toss the dish together to promote togetherness and harmony and the higher you toss the better! This is always one of my favourite dishes as it is fresh, crunchy and tasty and this disappears in a flash. Even my food scientist father who shuns raw meat and seafood polishes off a lot of this.

Quanjude's Peking duck is slightly different from the one we more commonly have here. In Australia the first course is pancakes while the second course in sang chau bau or lettuce wraps. 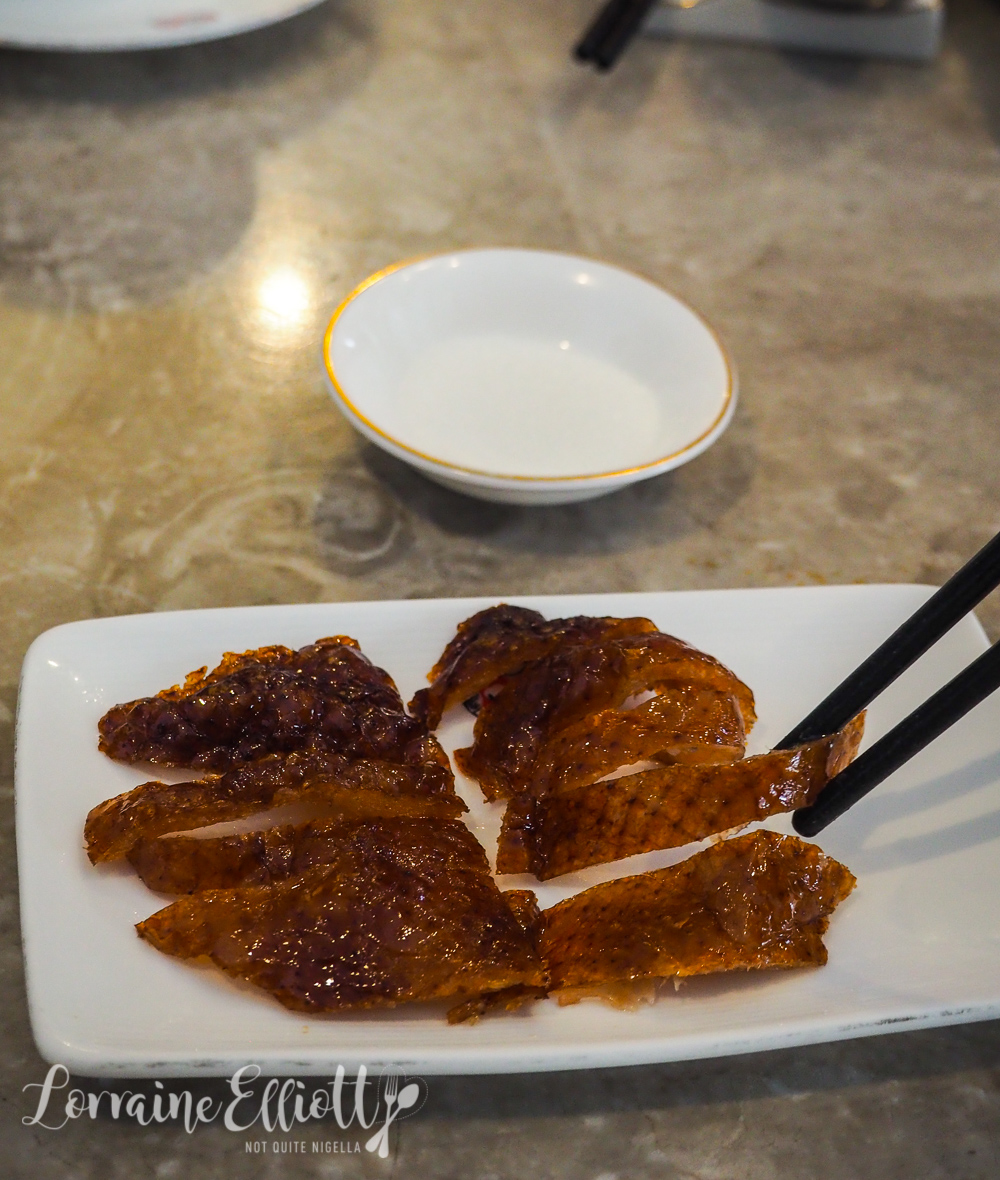 Here it is served in a more traditional style where a chef wheels out a trolley with a duck and slices off the skin and places this on a small plate with a small bowl of white sugar for the first course. There you pick up a sliver of the crispy skin and dip it into the sugar to bring out the flavour of the duck. 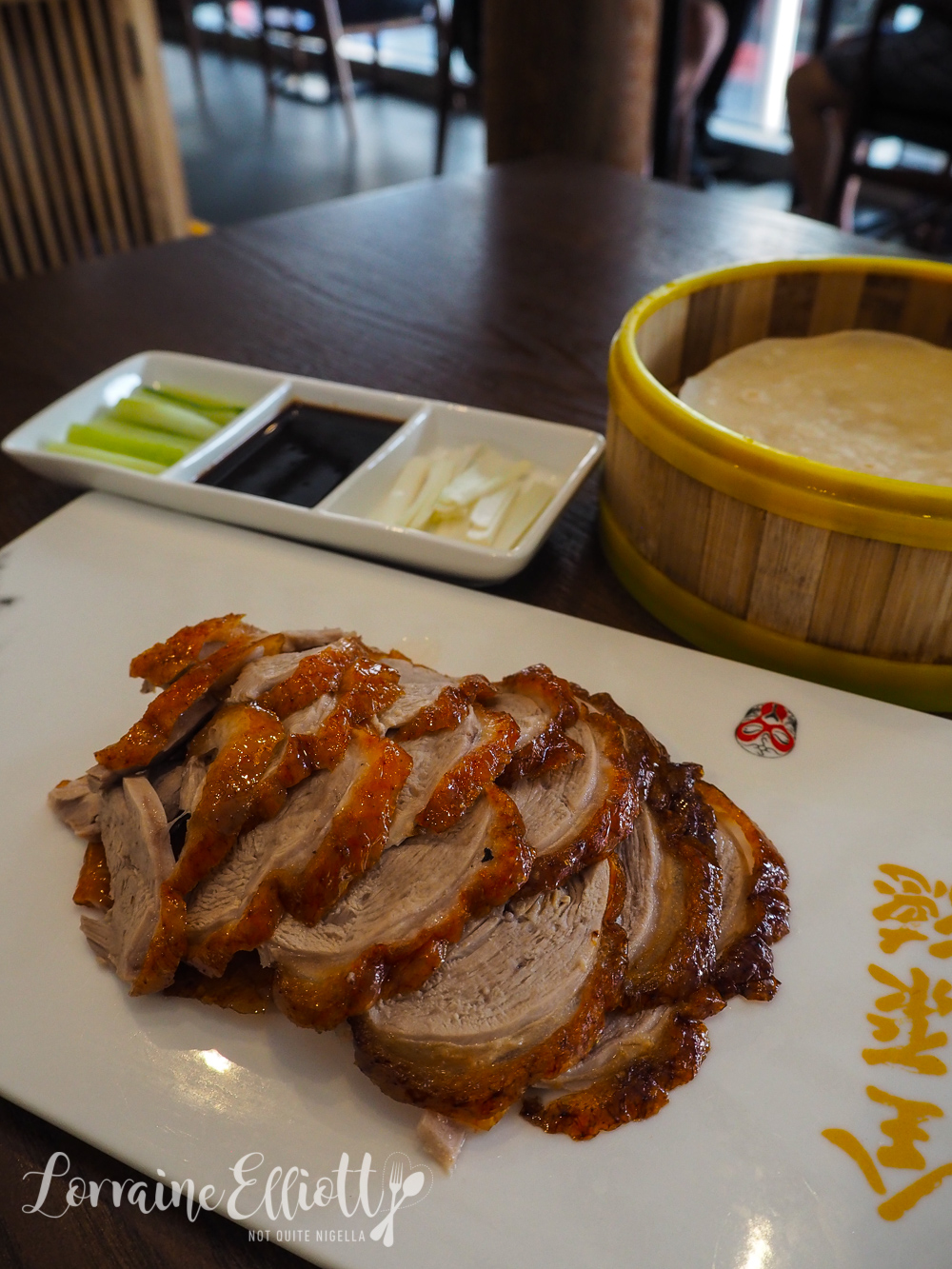 The chef then slices the meat and skin off the duck and serves it fanned out onto two plates for the second course. They give us a little lesson on how to prepare a duck pancake and each diner gets an individual platter of hoi sin sauce, cucumber and spring onion to make their own. If you're like me and prefer just skin in your pancake then you're out of luck and I watch the chef slicing it while internally screaming "Noooooo!". This is a thin slice of meat with an edge of skin. There's so much duck here and even with four of us, there's no way we can finish this. 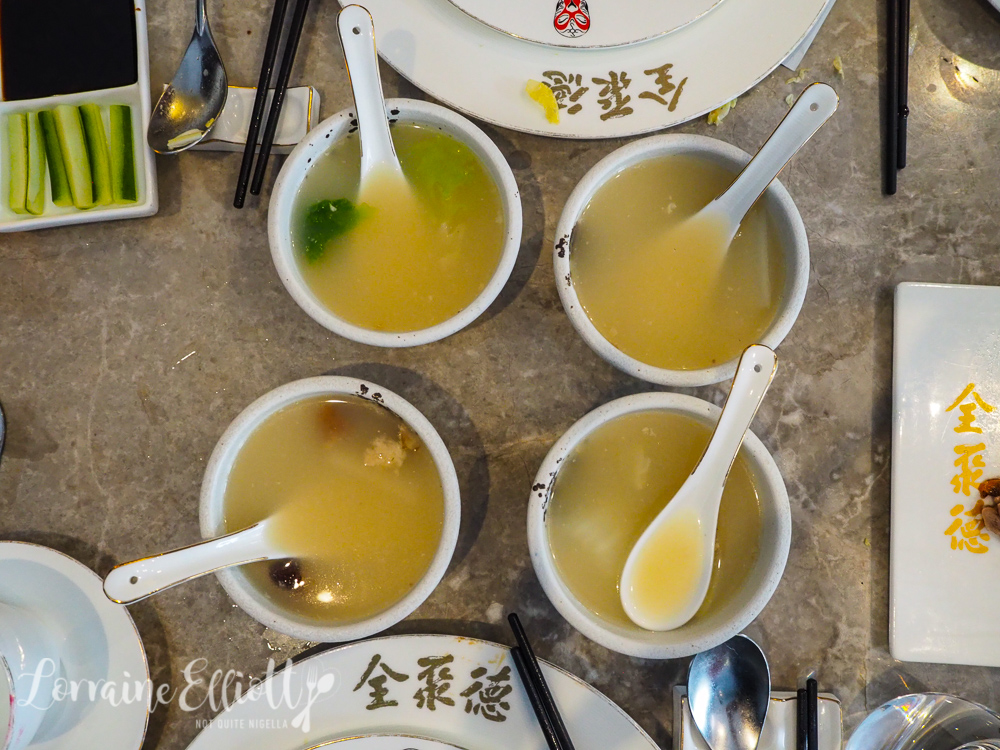 The third course is a duck soup made with spices and Chinese cabbage. It's a mild broth although nice and simple and the reason why the meat was all used was because this is made with the leftover carcasses. 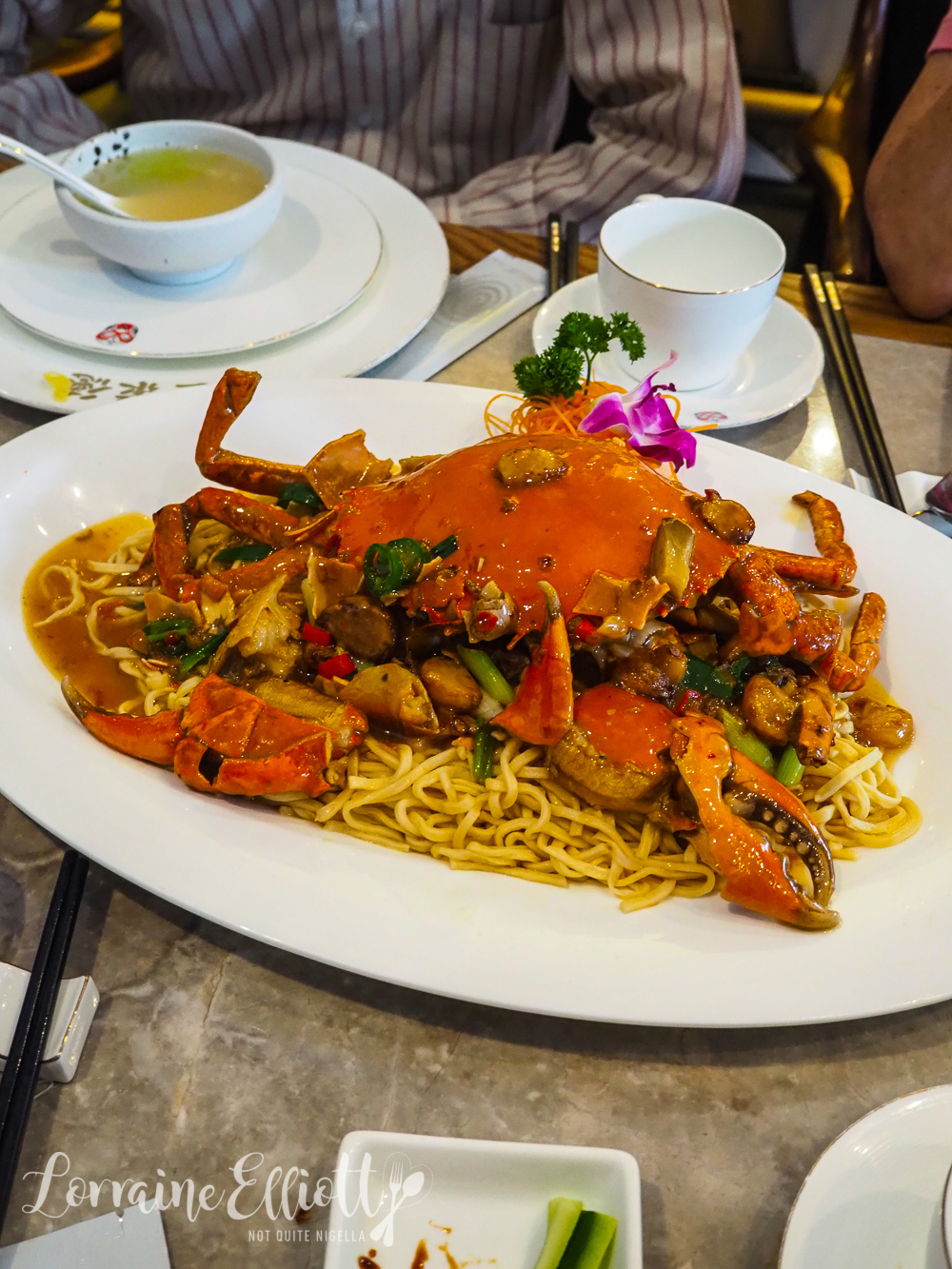 Out comes the seafood course. The prices for live seafood usually shoot up astronomically during Chinese New Year because they know that some people will pay for it but with this set menu you're somewhat buffered from that. It usually comes with ginger and shallot sauce but we just don't enjoy it as much as crab with XO sauce so they swap it for us. It's delicious with a good amount of sauce to it and the crab is full of meat. 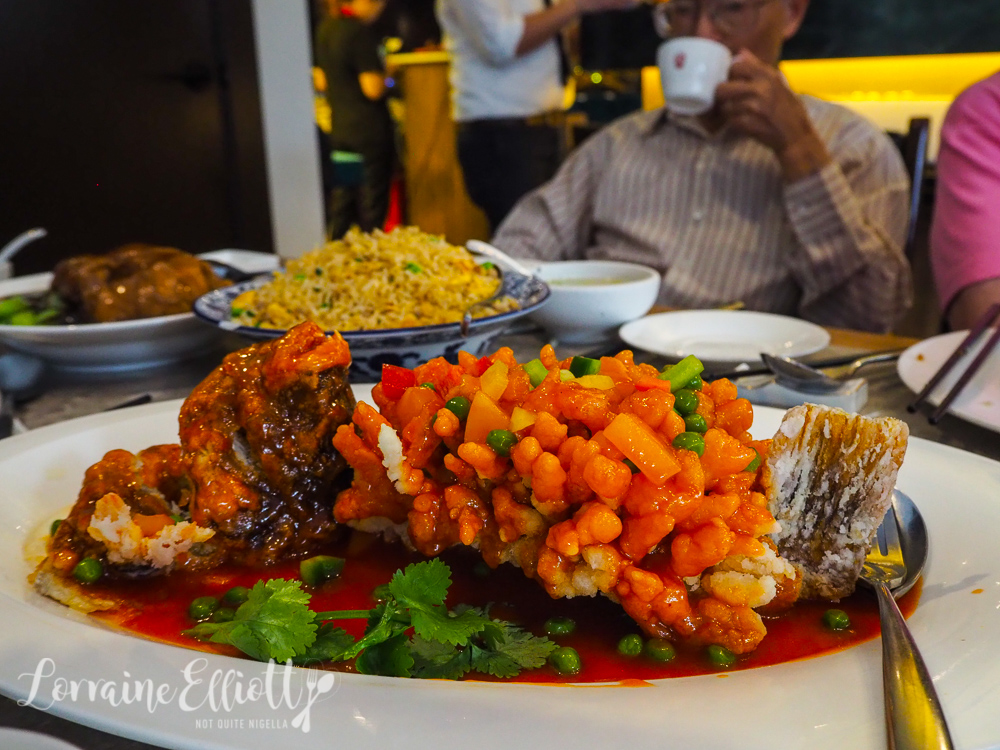 I'm allergic to barramundi so they swapped it out for parrot fish. It's certainly spectacular looking and is very easy to eat with most of the bones removed. A whole fish is very lucky during Chinese New Year as it symbolises togetherness and completeness. This is another favourite dish along with the mud crab above as the sweet and sour sauce goes so well with the crunchy skin and soft meat of the deep fried fish and I go for the head. 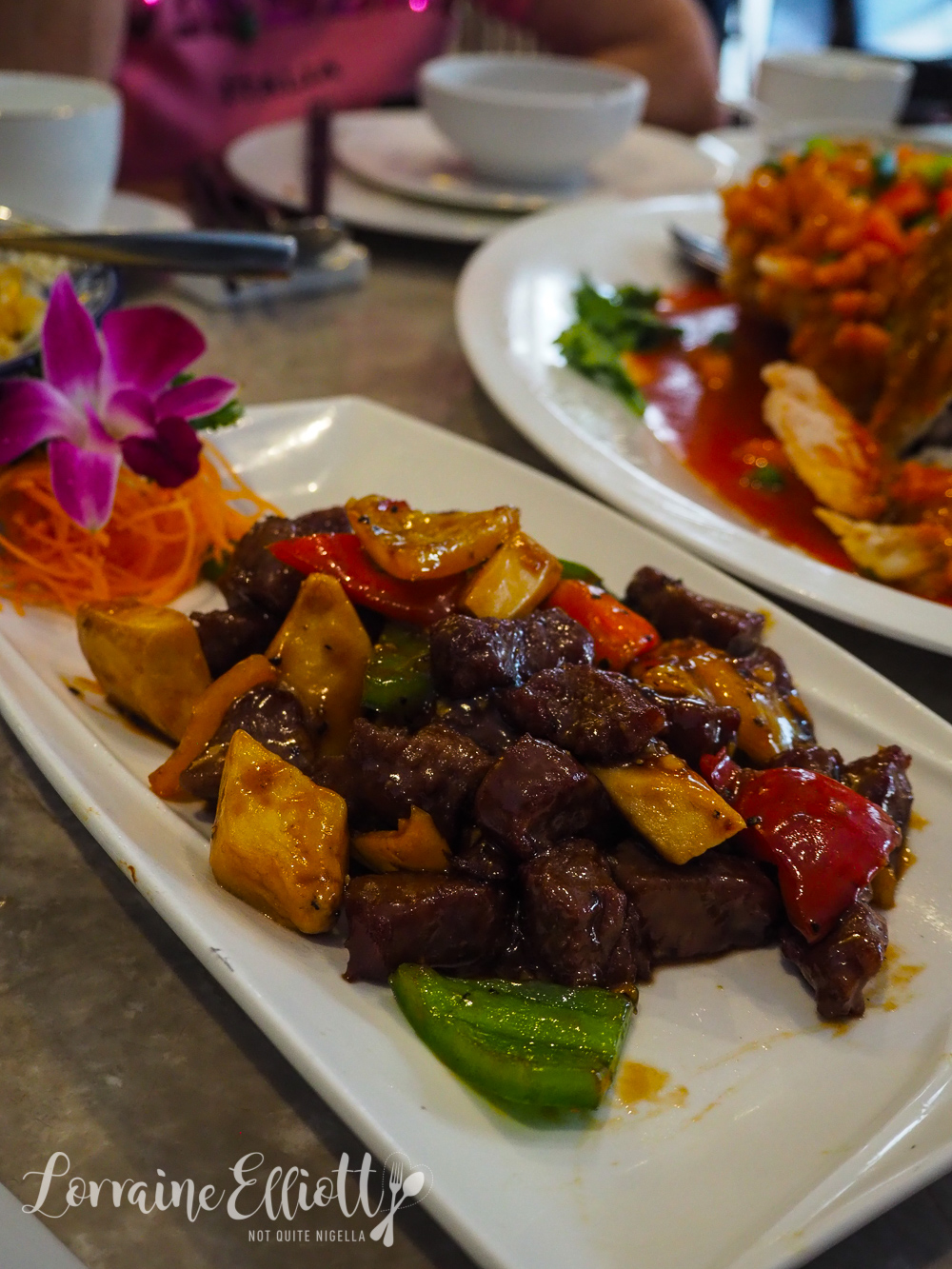 By now we are stuffed. I totally spent my stomach space on the crab, noodles and fish. I fit a few pieces of very tender wagyu beef and garlic in. Wagyu is a relatively new thing for my mother (she doesn't buy it for cooking) and I can see she loves the texture of it along with the meaty king mushrooms. 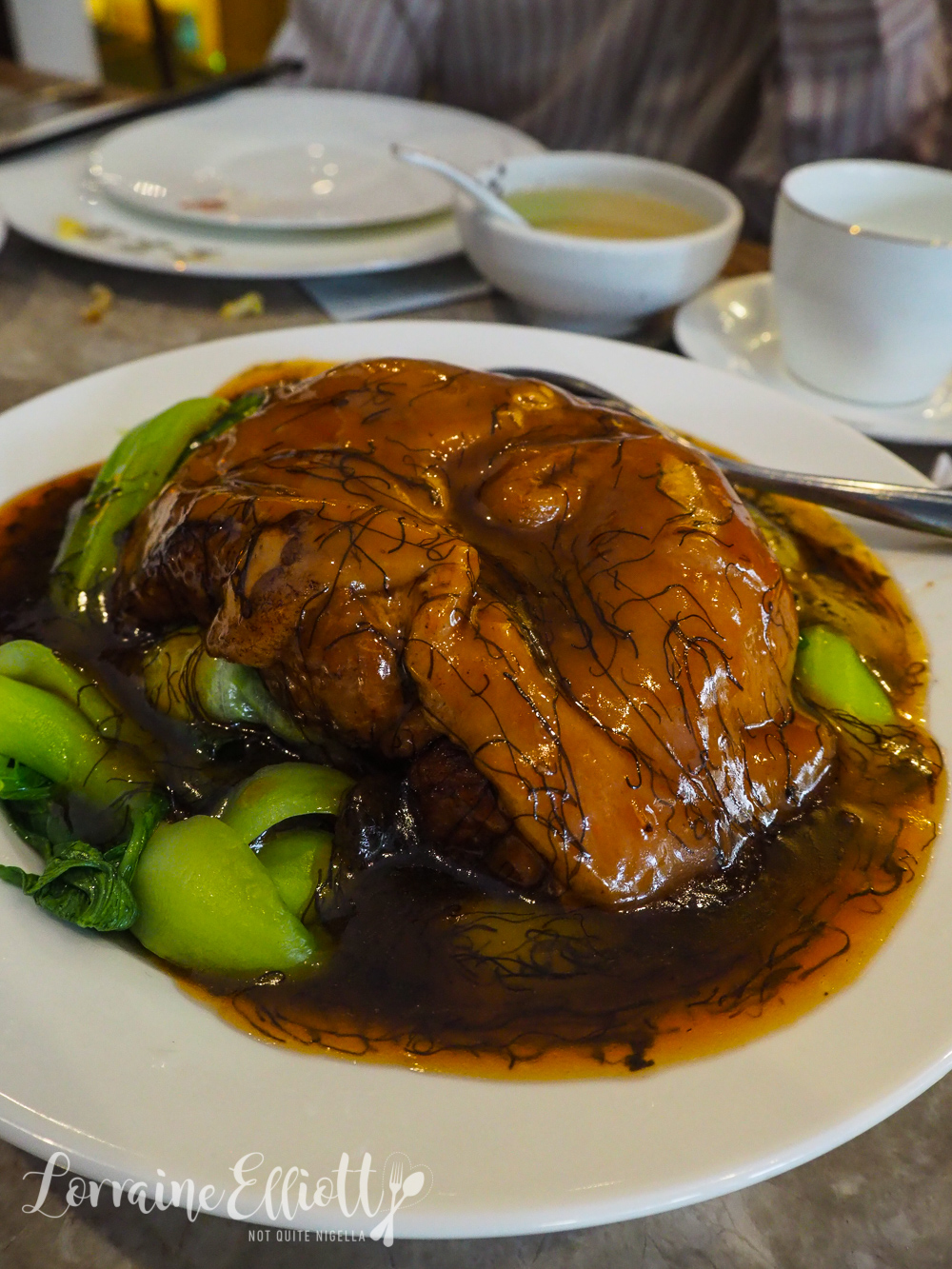 Braised Pork Knuckle With In House Sauce and Fat Choy

Pork is a lucky food at Chinese New Year. The pork knuckle is enormous and cooked until buttery, melty soft and served with fat choy or "hair vegetable" that looks like little black hairs that make it a little visually confronting. Fat Choy is popular because it sounds like Fat Choi which means to get rich. 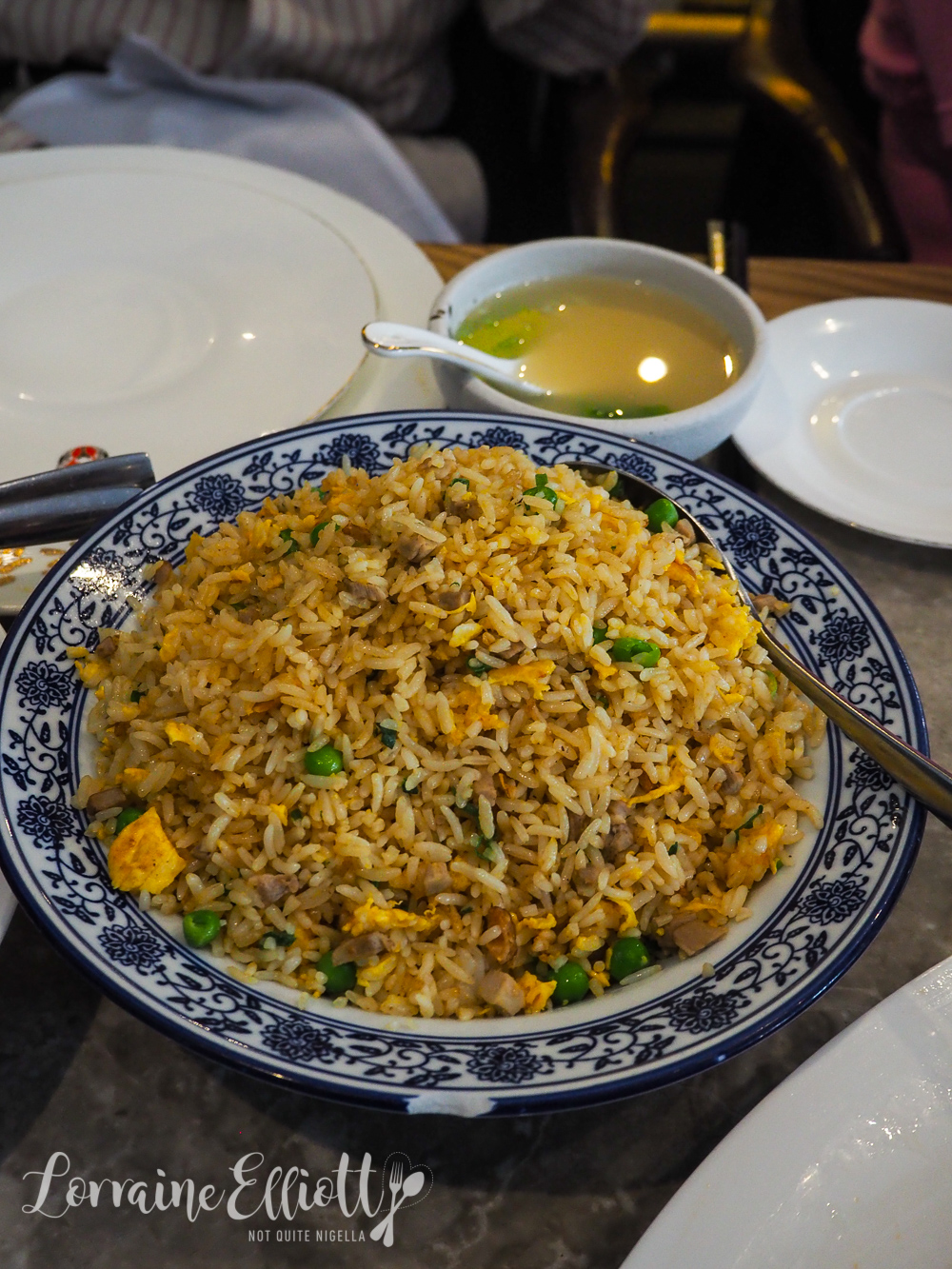 The menu also comes with the Quanjude fried rice which is quite nice although not particularly different from other fried rice. 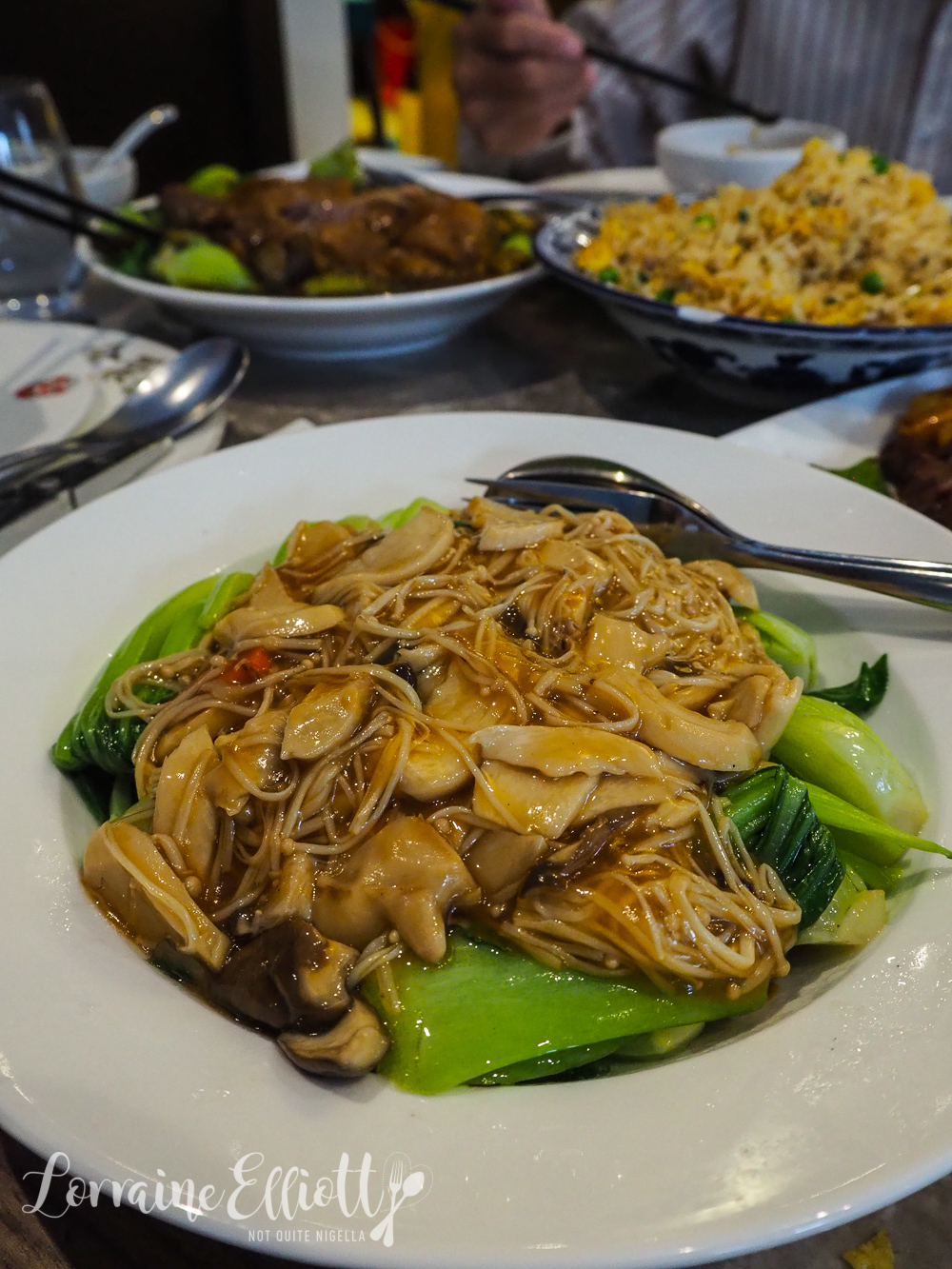 Although it comes late and I have nary a spot to fit it in, the mixed mushrooms are really good and full of flavour. I especially love the enoki mushrooms. 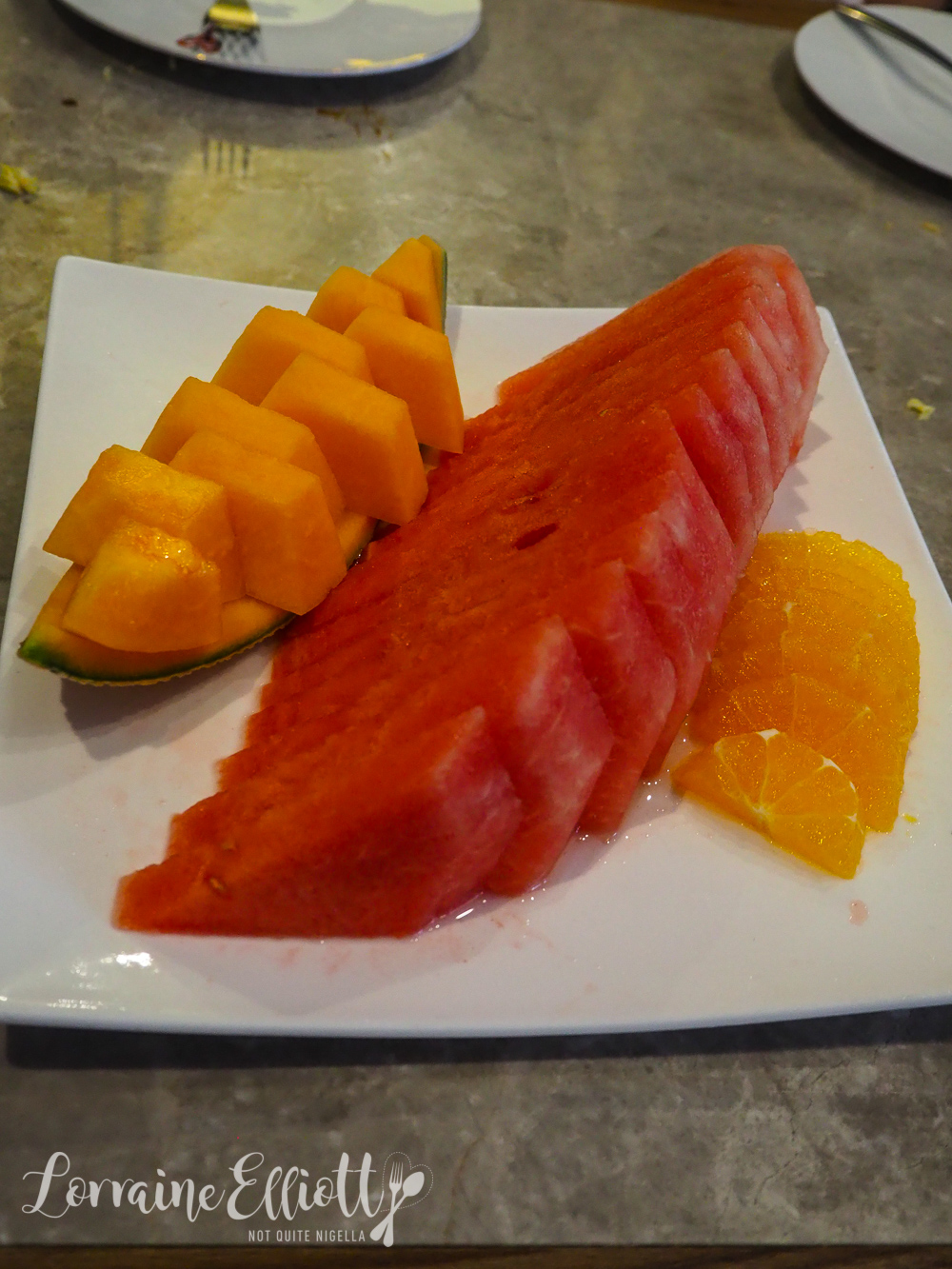 For dessert they bring out an enormous fruit platter with watermelon, rockmelon and orange. Then there's another little surprise, bowls of mango pudding sago which Mr NQN promptly hoovers up-it's sweet, creamy and delicious. 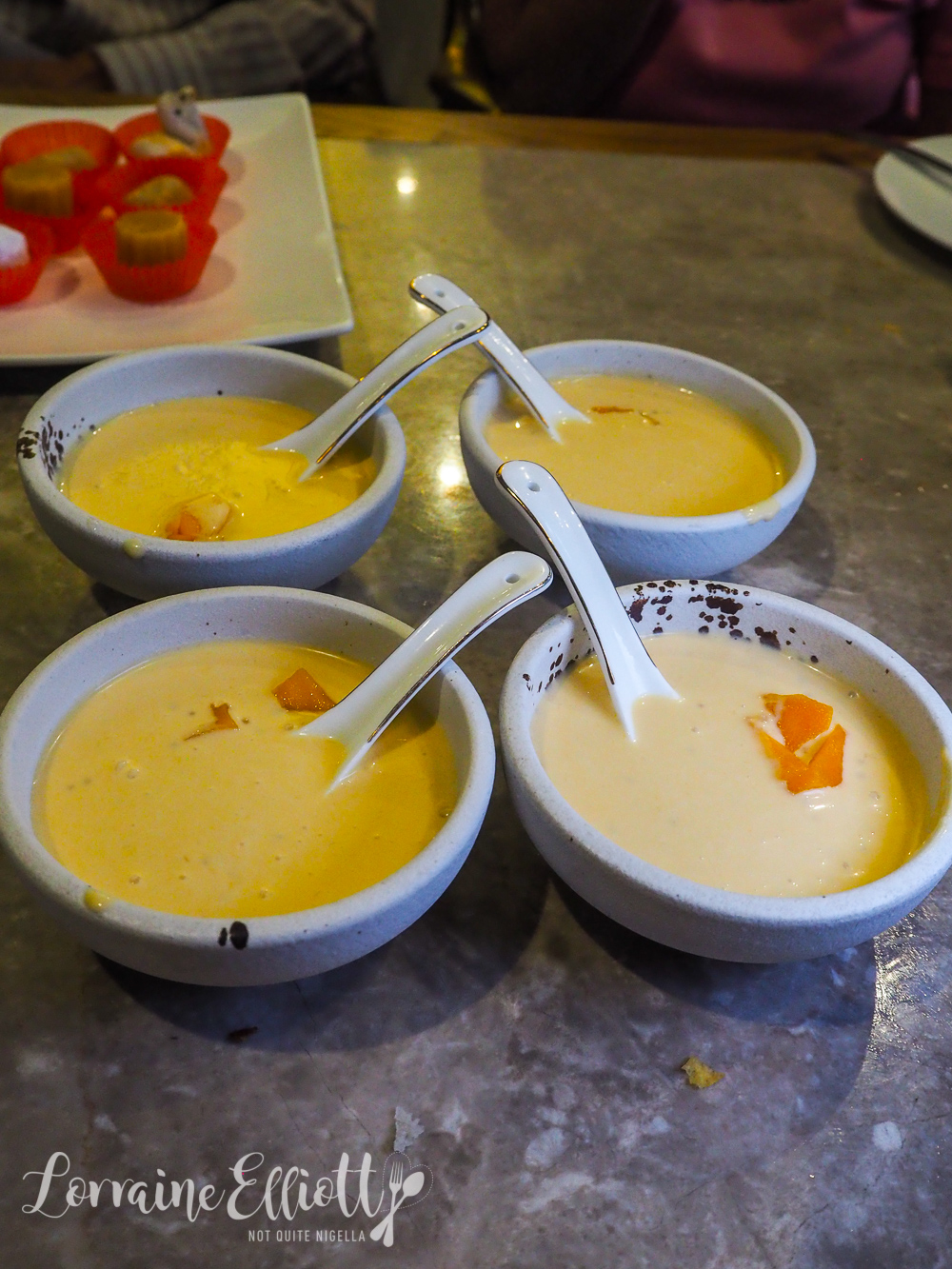 Then there's the plate of sweets that we are told are from Beijing. They've got names like Aiwowo which are nutty with sesame, sugar and glutinous rice - a small round mochi of sorts. There's also the Rolling Donkey with rice flour rolled with sweet bean paste and rolled in bean powder. There are two little pastry ducks filled with sweet red bean and mung bean jellies in the shape of flowers. And in usual Chinese New Year tradition, everyone is stuffed full. 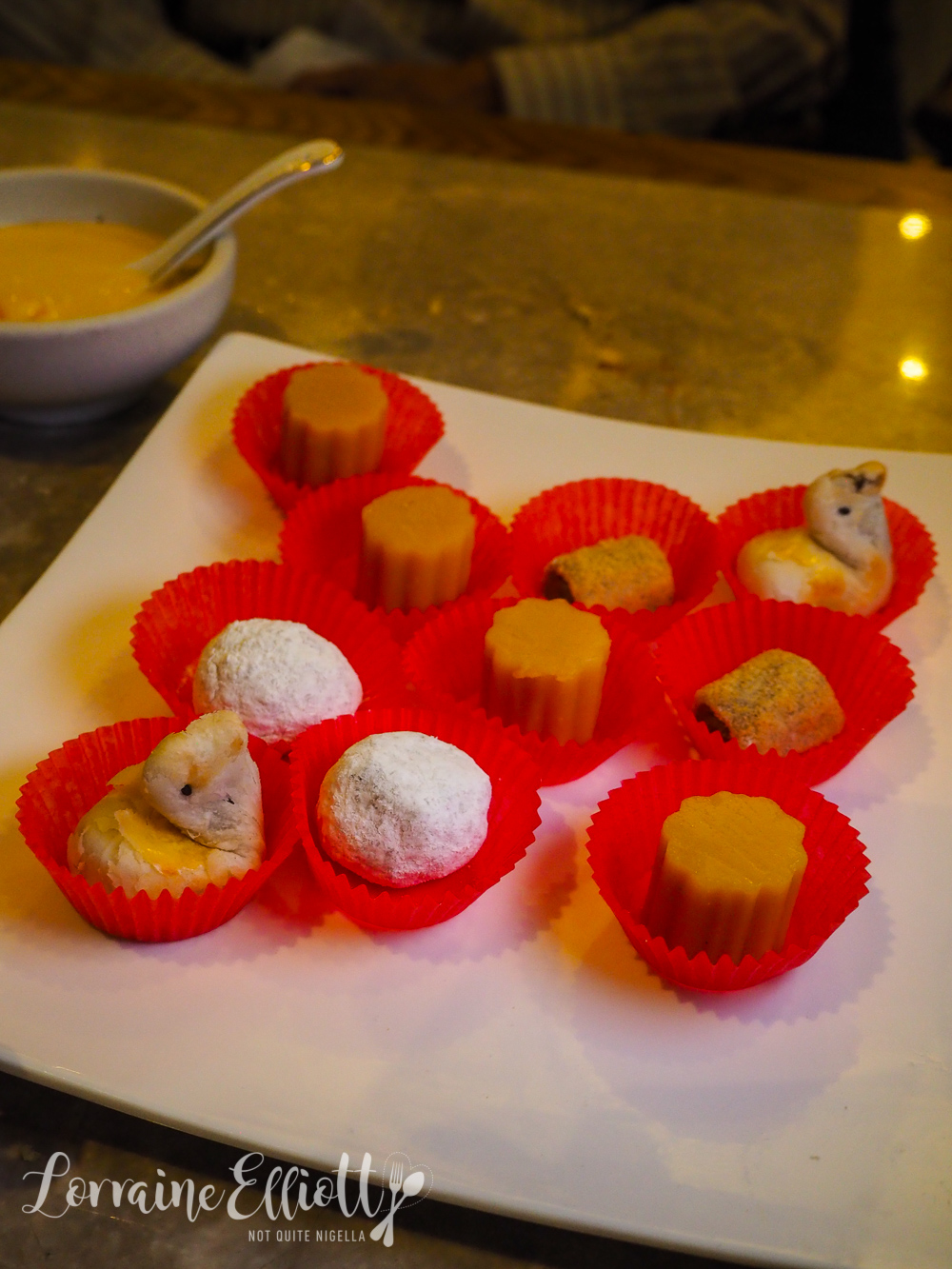 So tell me Dear Reader, do you enjoy whole fish or do you prefer fillets and not to see the head or tail? Are you having a special meal for Chinese New Year? Which Chinese astrological sign are you? 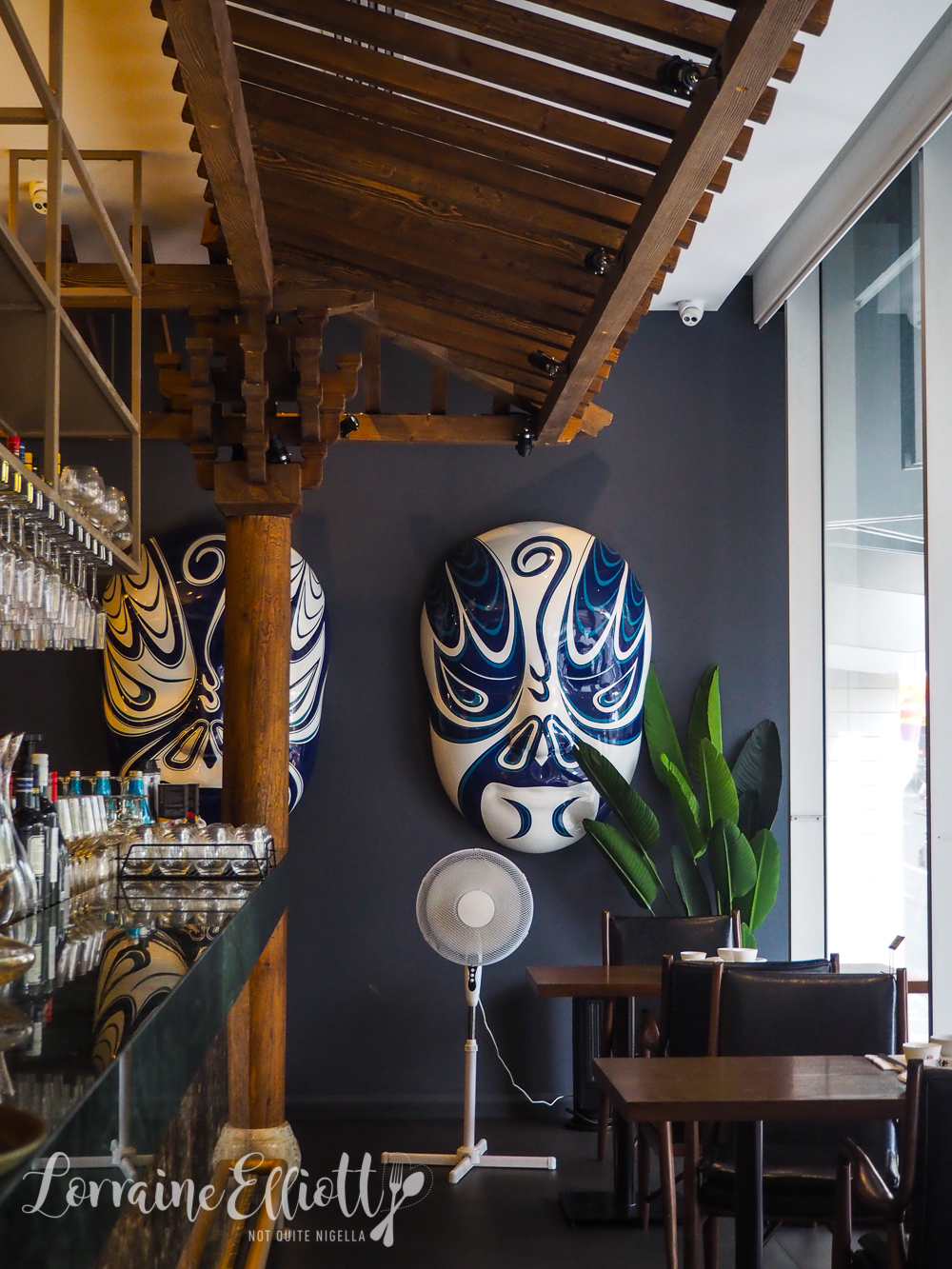 NQN and family were guests of Quanjude but all opinions remain her own.