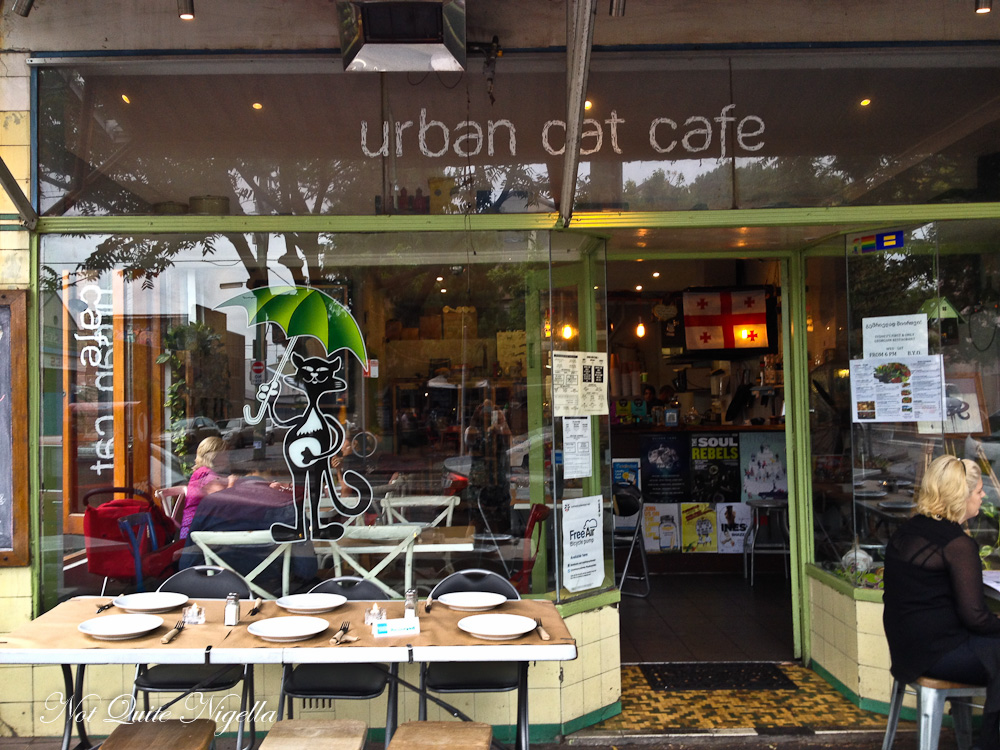 "Do you mean Georgia the US state or Georgia the country near Russia?" Mr NQN says to me out of the corner of his eye, knowing completely of my predilection for things from America's South.

"Do we have to get dressed in Georgian period costume?" Celia asks. 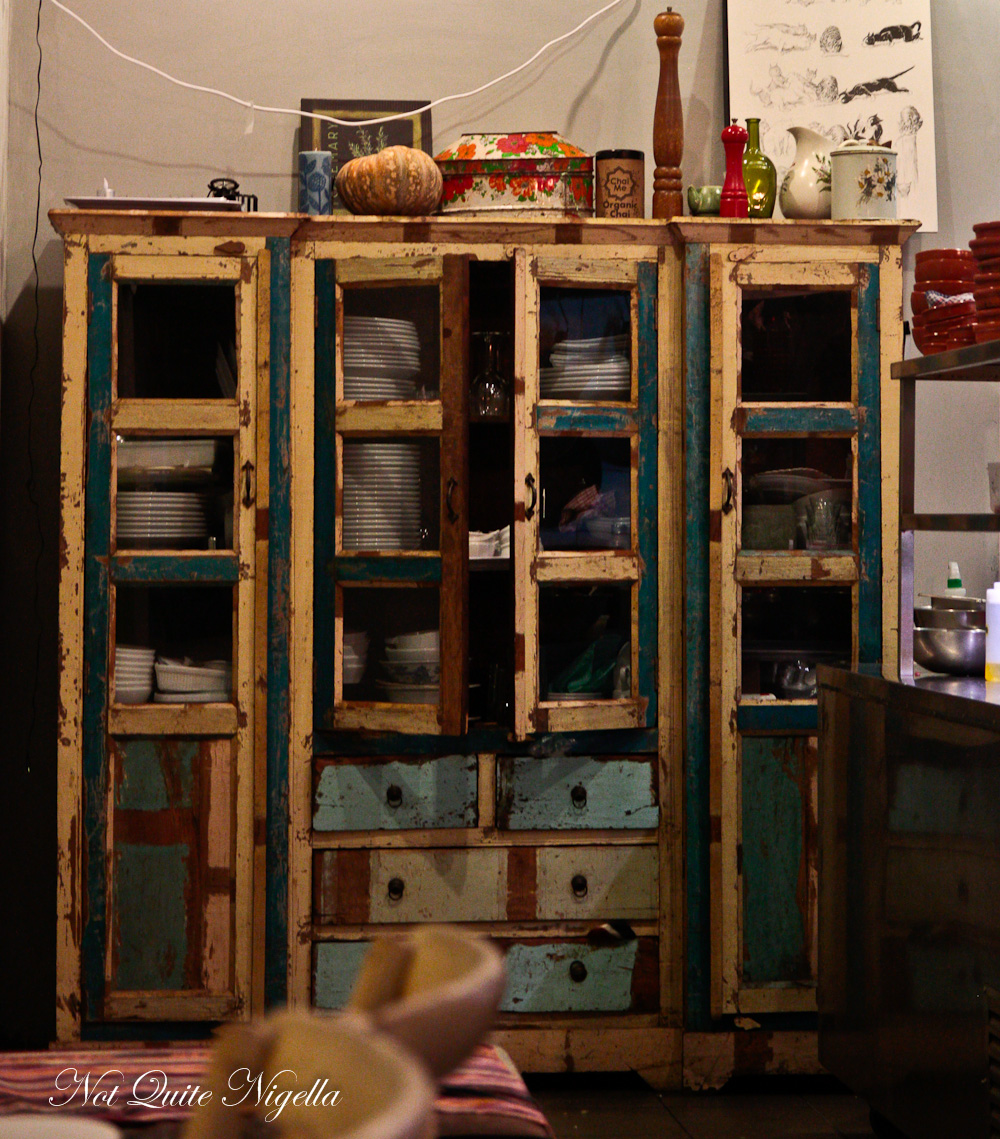 When I suggested to Mr NQN, Celia and Pete that the venue for our dinner would be Sydney's only Georgian restaurant, I wasn't prepared for these types of questions. The Georgia in question is the country. It was a restaurant suggested to me by Dear Reader Maria R. The Urban Cat Cafe is a cafe during the day but from Wednesday to Sunday nights, it becomes a Georgian restaurant complete with a Georgian chef Paata Khutsishvili who only just arrived in Australia during December 2013. 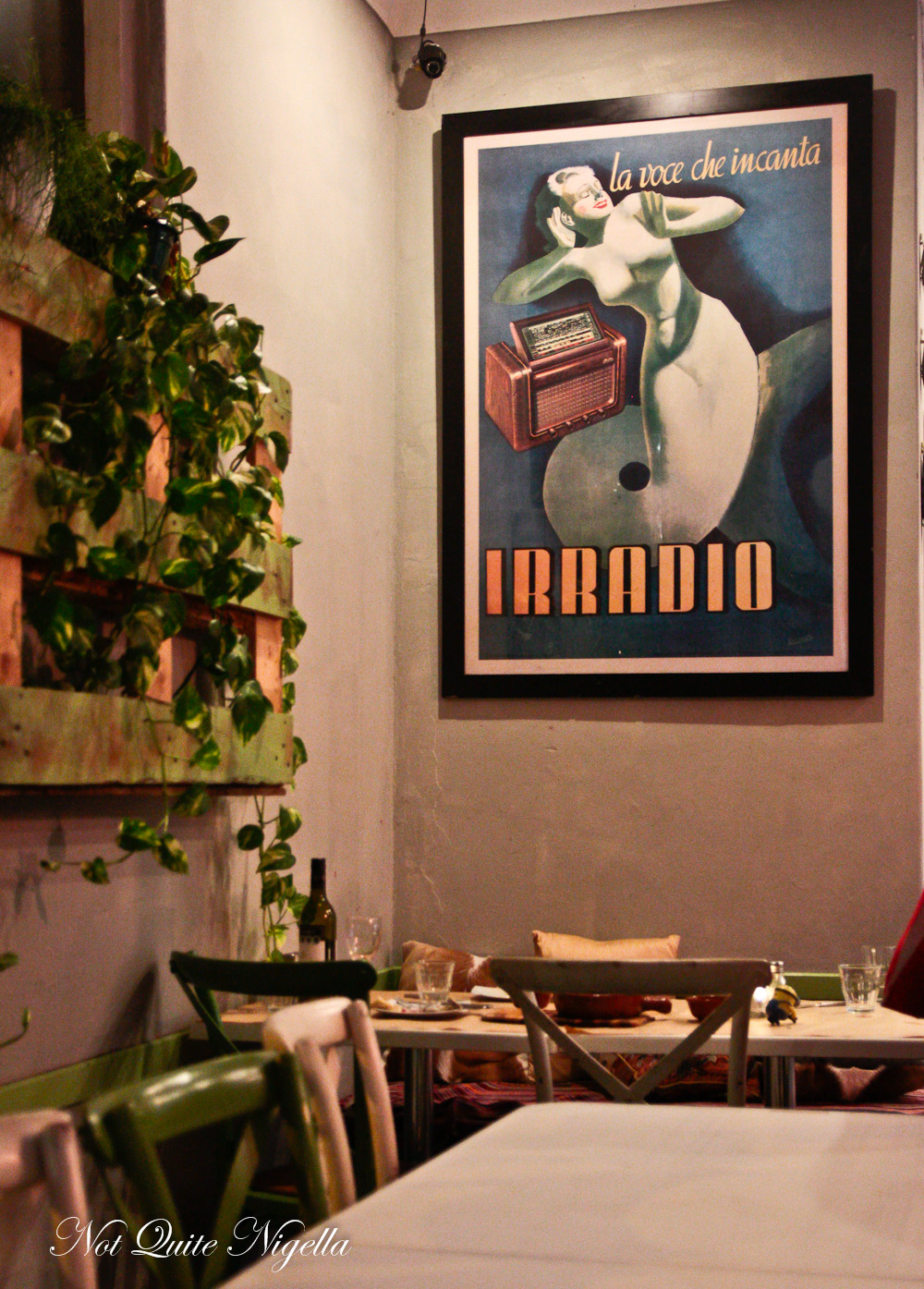 I had never eaten Georgian food and all I knew of it was that the romantic, curvy writing was designed to resemble grape vines. Georgia is known for its wine industry which goes back eight thousand years where they use traditional methods like buried clay jars called qveri and native Georgian grapes. 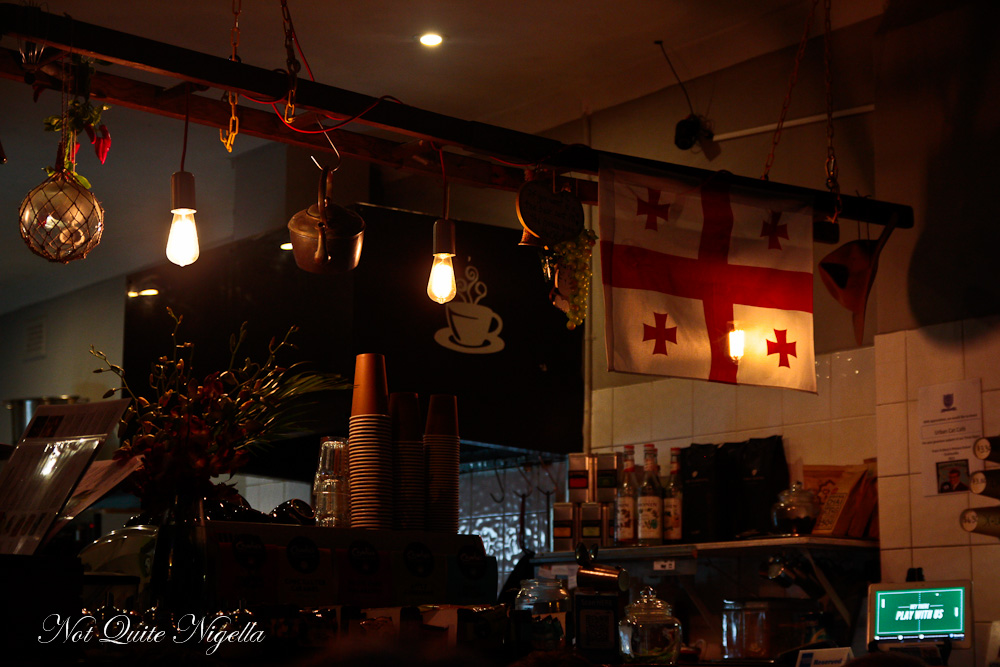 Georgia is surrounded by Russia to the north and Turkey, Armenia and Azerbaijan to the South while its west looks out to the Black Sea. Russia and Georgia are linked through shared history as Georgia was annexed by the Russians at the beginning of the 19th century and it gained independence in 1991. But as we learn, the two cuisines are quite different. 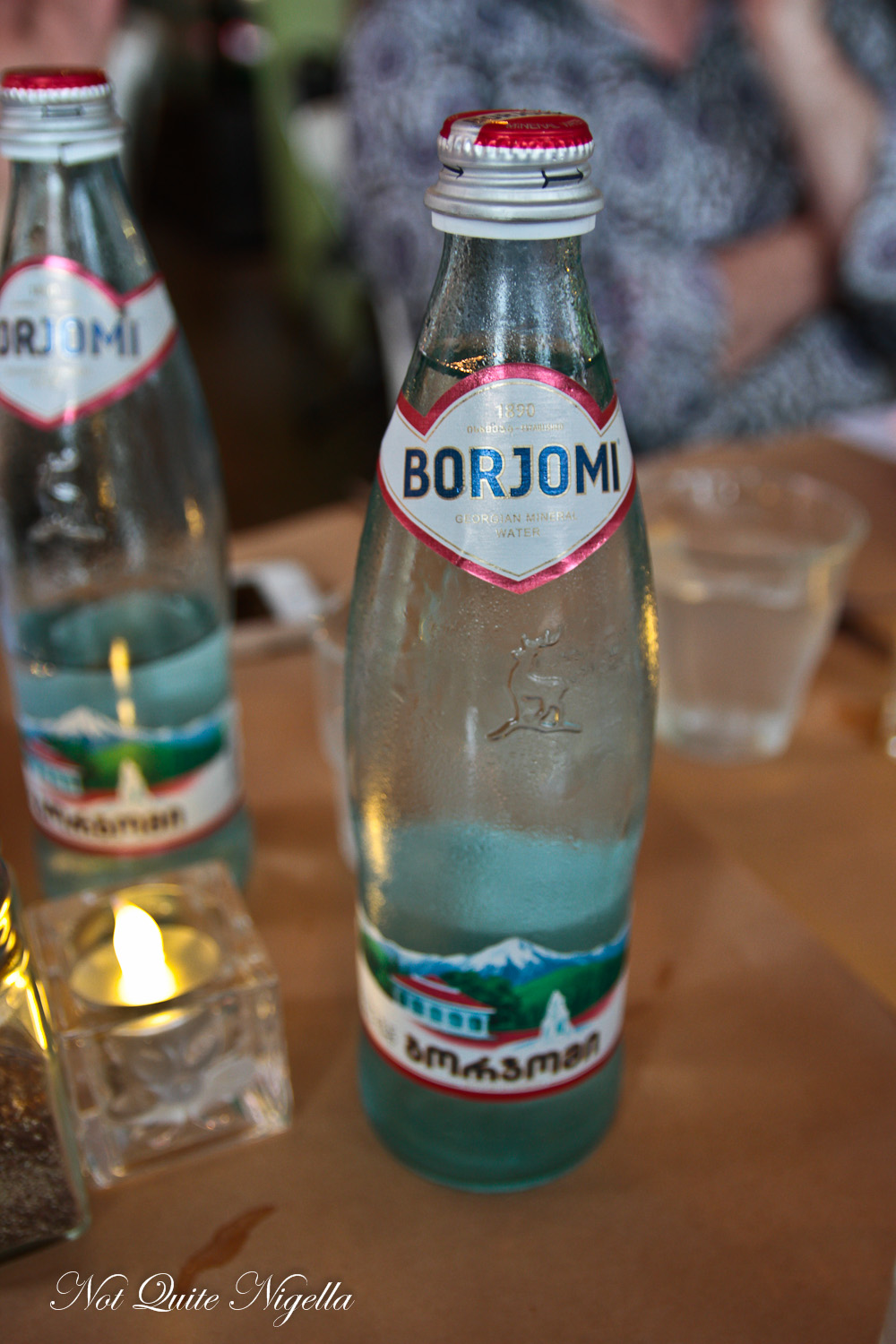 We arrive and are shown to our table. Our charming Spanish waiter, perhaps seeing our alarm at the small table for four asks if we would like two tables pushed together and we gratefully accept the offer. We start with some Georgian mineral water which packs a salty punch - a quick peek at the label shows a high 750mg of sodium per litre (the Australian recommended daily allowance for sodium is 460–920 mg).

People are said to either love or hate the fizzy water that hails from Borjmoni Gorge at the high altitude resort town on the hills of both sides of the Mtkvari River. Interestingly, the drink is Georgia's third biggest export and the drink itself stands as a symbol of Russian Georgian tensions. It was banned in Russia in 2006 due to what some say is a punishment for Georgia's pro-Western policies and has not been sold in Russia since. 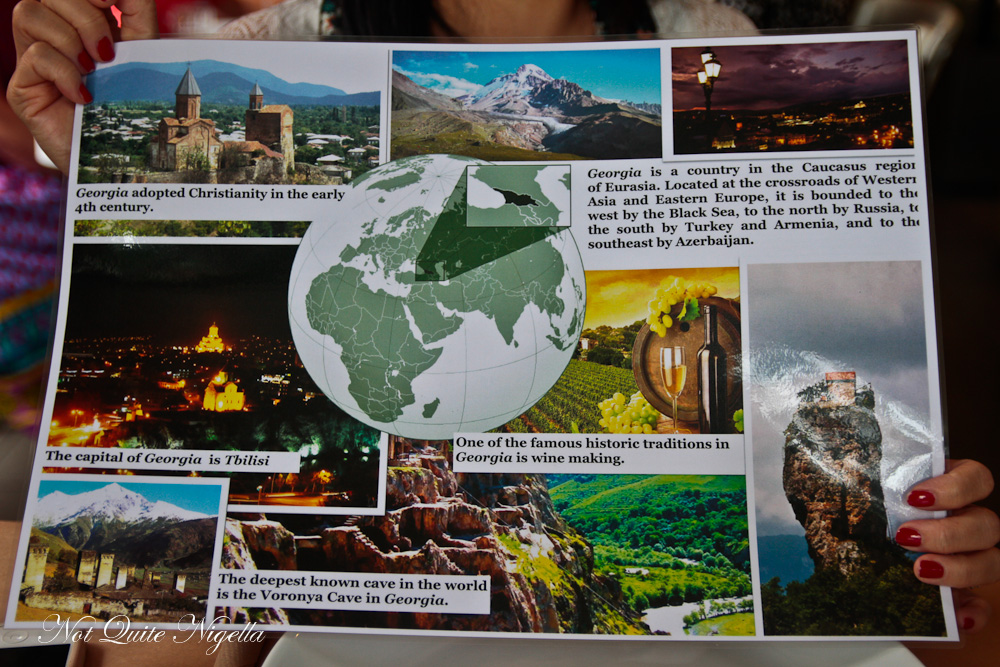 Celia and Pete arrive a few minutes later and we are handed our menus. They're laminated and one side showing the history of Georgia while the other side displays the food menu. Looking around us, the restaurant is full and only our table and one other are non Georgian or Russian. Large plates of delicious smelling food are being brought out to the tables who tuck in eagerly. 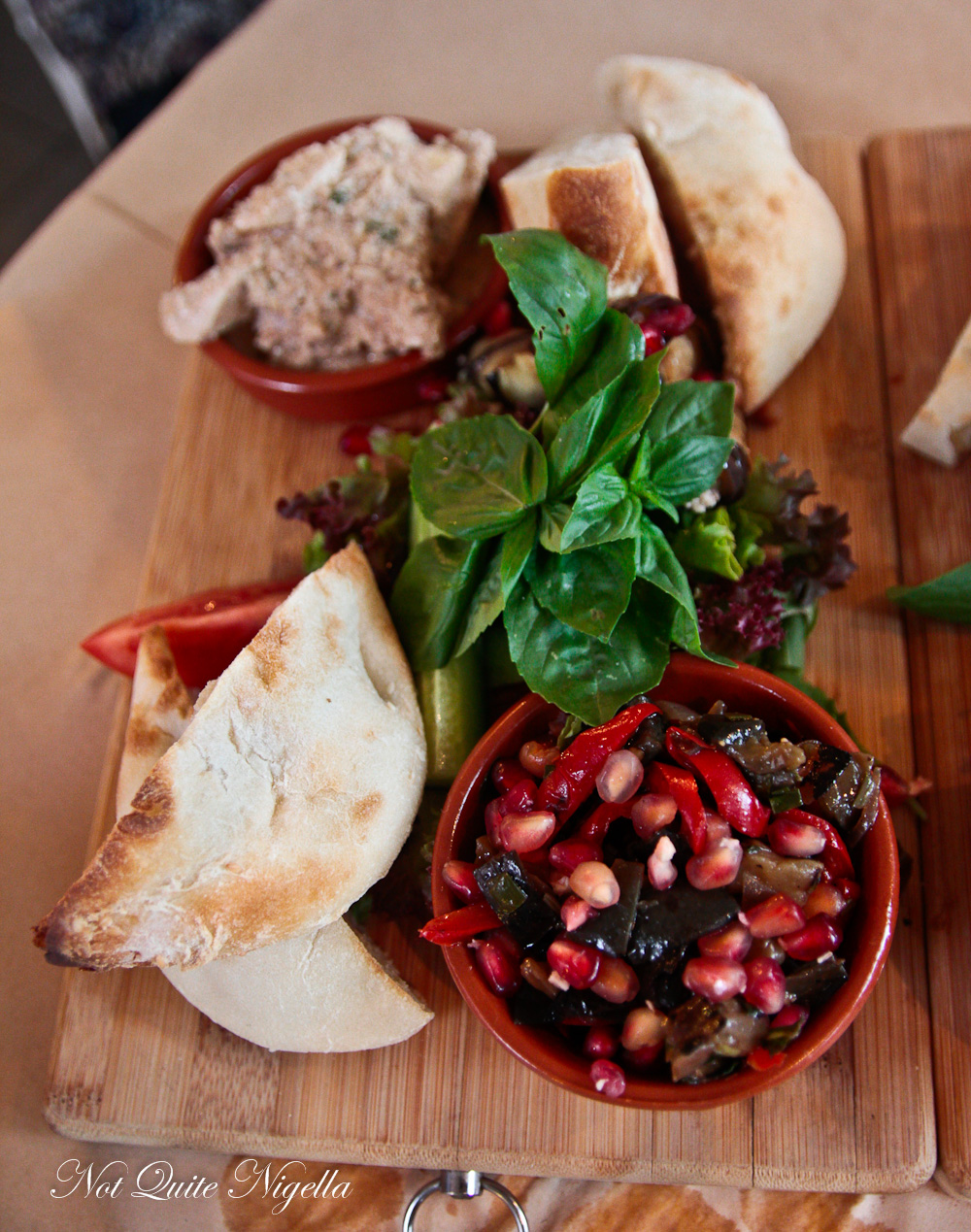 We go with our waiter's recommendation of all of the starters. As there is only one chef, things take time to come out, especially if there's a large table expecting mains. Celia and I are very hungry and every time a plate comes by, we look at it hopefully. The starters are brought out on two wooden boards.

There are five items and I start with the chicken in walnut sauce or satsivi. The chef tells us that walnuts are very prominent in Georgian cuisine and the walnut sauce is a slightly creamy sauce made with stock and ground walnuts with tender chicken pieces. The ground walnuts are used in lieu of cream. There are also badrijani or rolled up pieces of grilled eggplant stuffed with walnuts and pomegranate seeds. 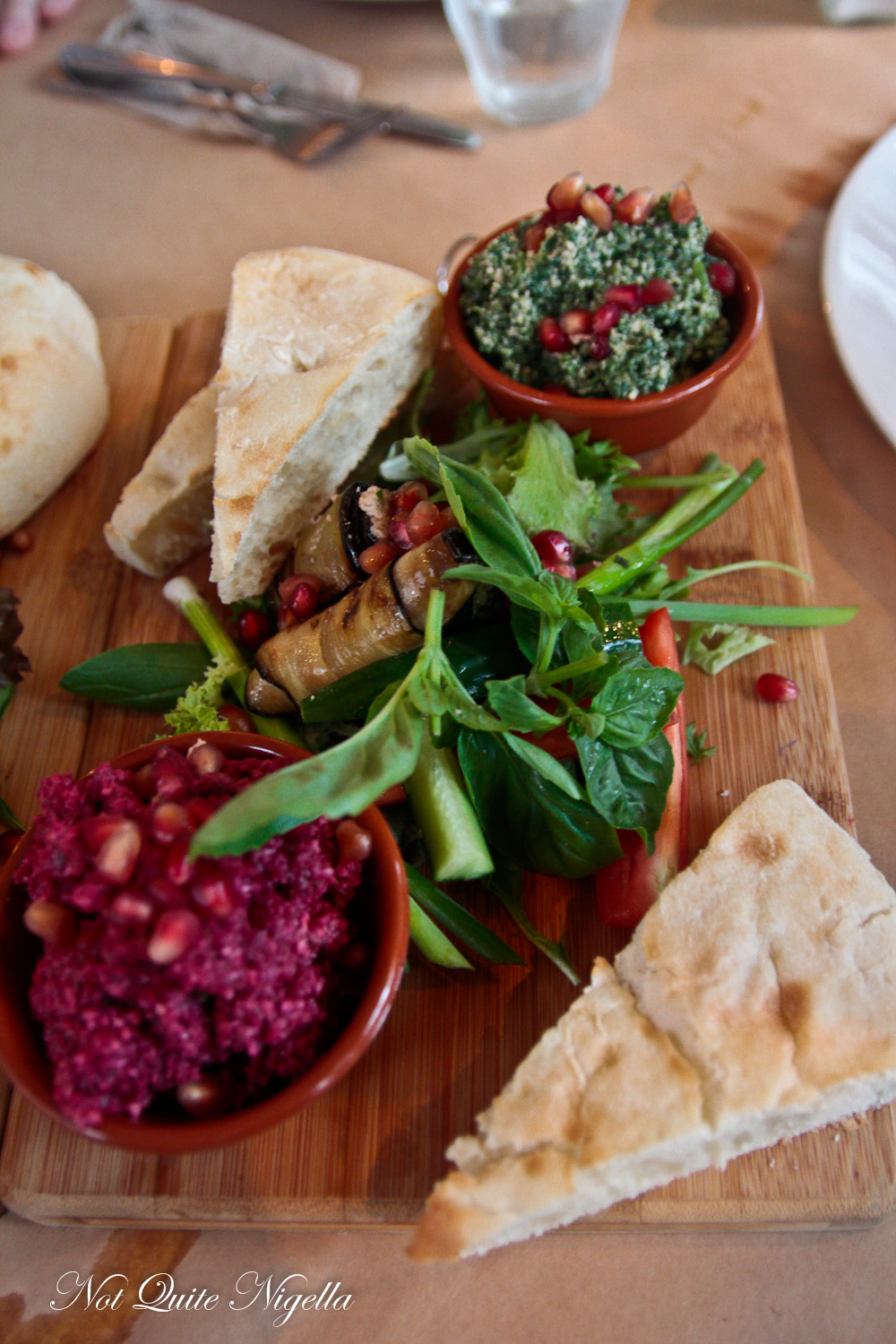 The eggplant adjepsandali or the Georgian version of ratatouille is fantastic and I could eat a whole bowl of this. So is the Pchari of spinach and garlic dip but the Pchari with beetroot dip with its delightful sweetness is the one that wins our hearts. Pete comments that the dips with the pomegranate arils are the only thing that he has eaten where it feels like the pomegranate seeds belong rather than being used for decoration. Plenty of extra toasted Turkish bread is brought without asking. 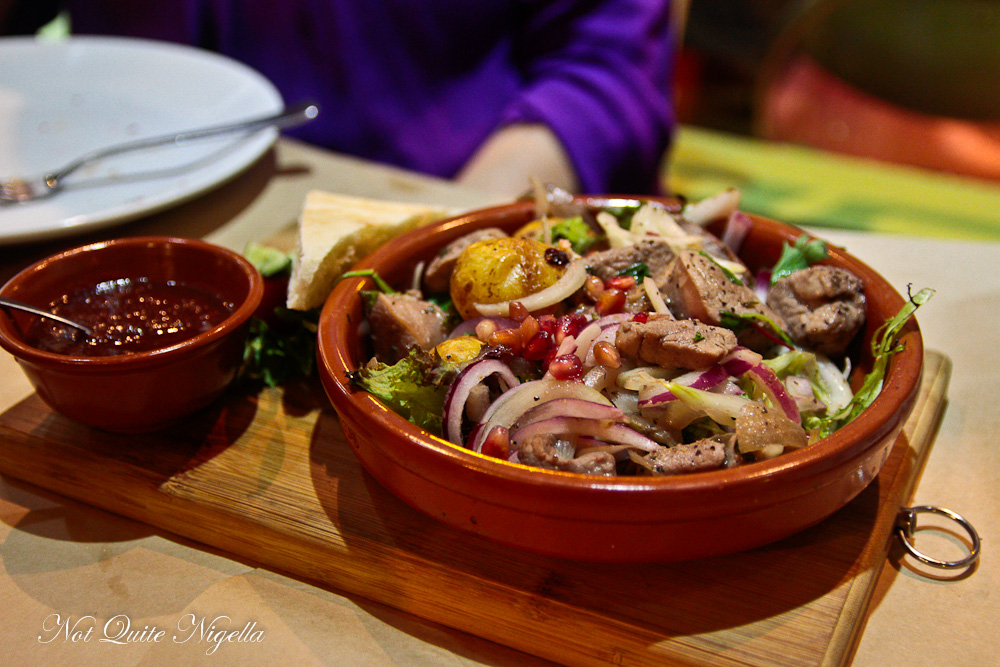 We were warned that the Georgian style fish would take longer so the pork appears first. The spices used smell wonderful and a common spice mix is khmeli suneli which is a blend of up to 15 spices and herbs. Georgian spices include lesser known ones such as marigold flower petals, crushed berberries, blue fenugreek and summer savory.

The pork is tender, the potatoes perfectly cooked and although it is served with plenty of red onion, it never tastes acrid or like overkill. Our waiter recommends a side serve of tkemali or plum sauce that has a similar flavour to Chinese plum sauce but without the sweetness. It's actually strong and tart but perfect for the pork. 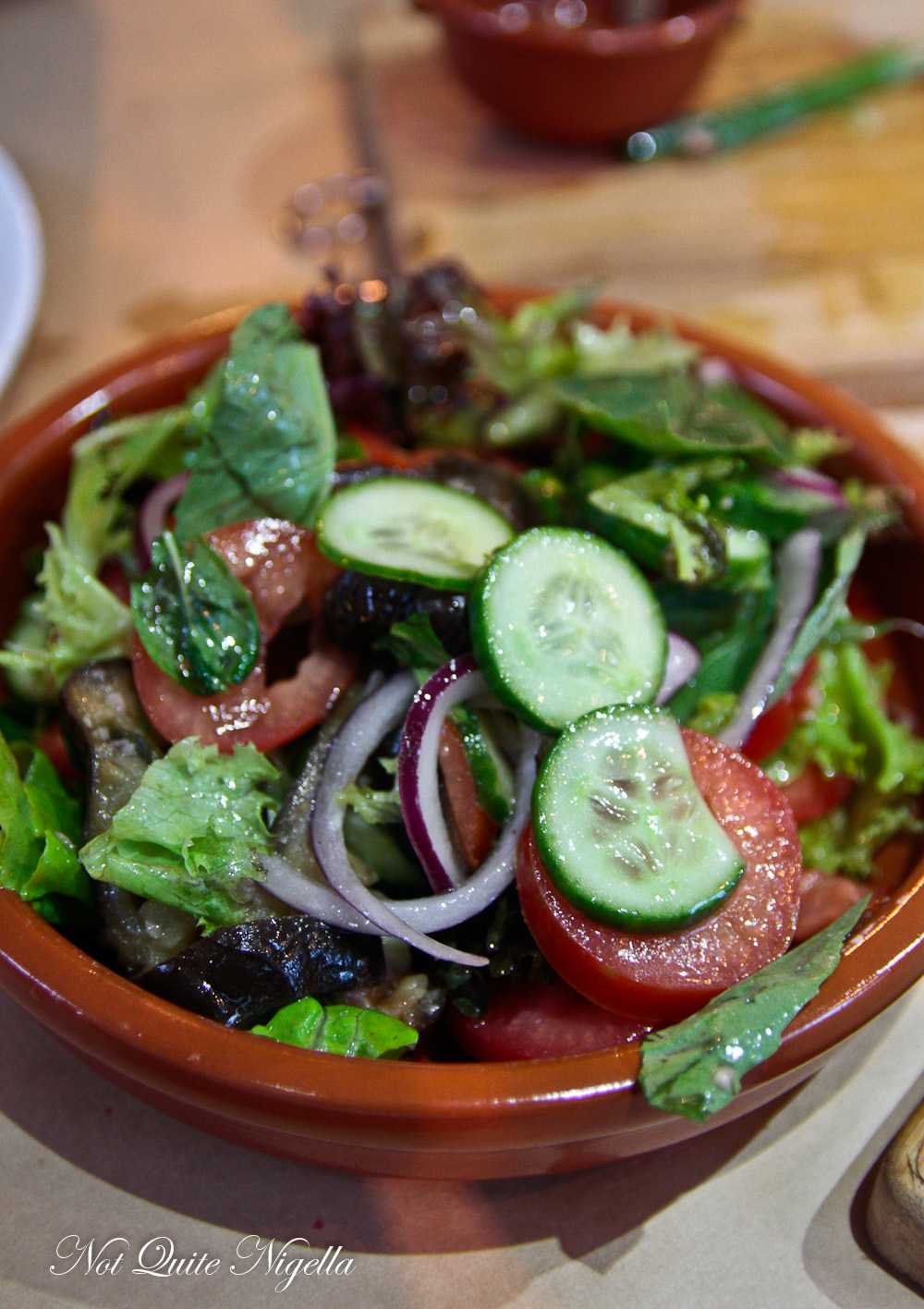 What appears to be a regular mixed salad is actually much better. It's seasoned with garlic and herbs and filled with eggplant grilled on the hob, slices of sweet tomato, lettuce and onion. 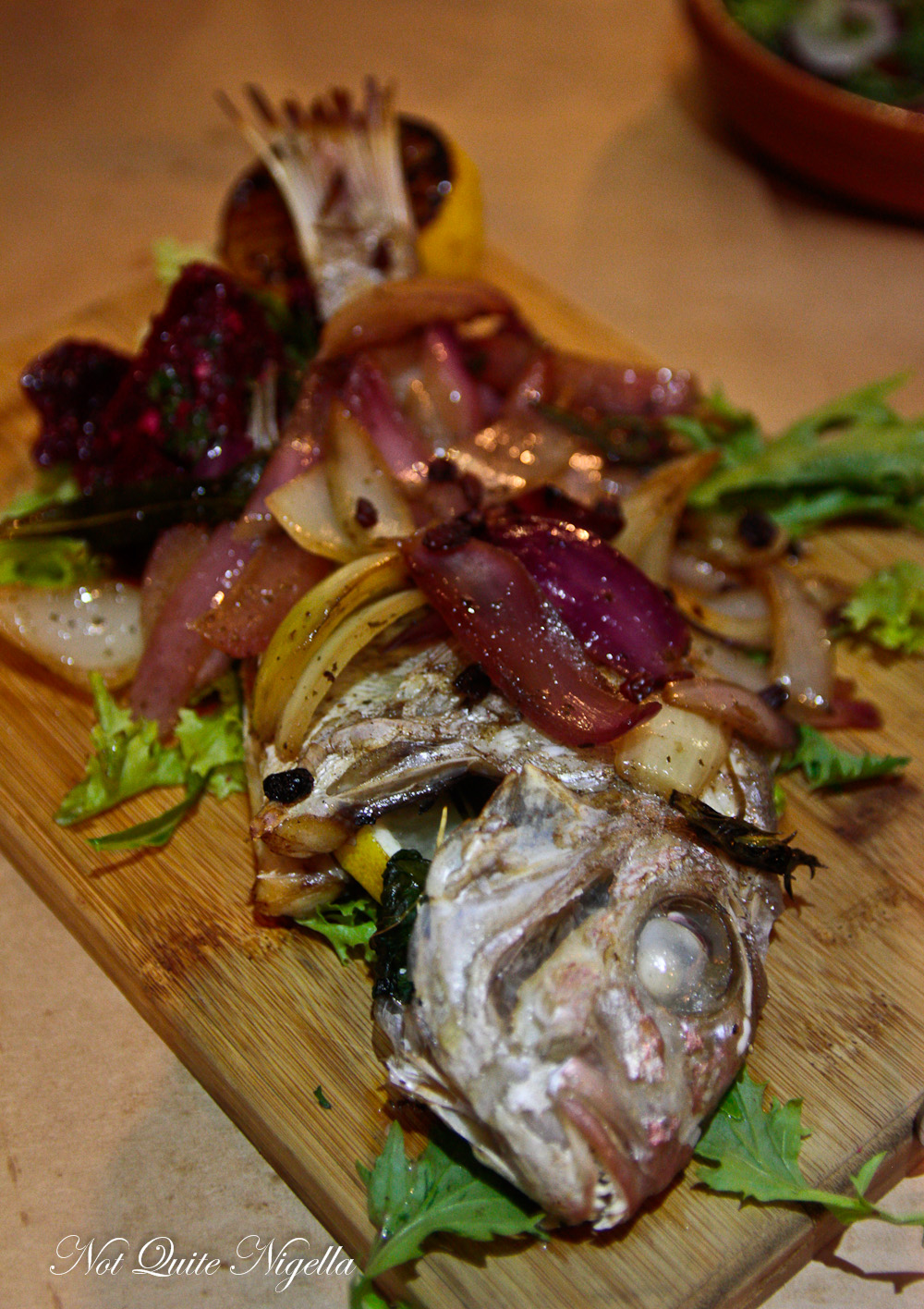 Our whole grilled snapper is brought out on a wooden board and is stuffed with herbs and covered with naturally sweet, lightly caramelised onion slices. There is also a side of roasted beetroot and a caramelised lemon half. This goes well with our two sides. 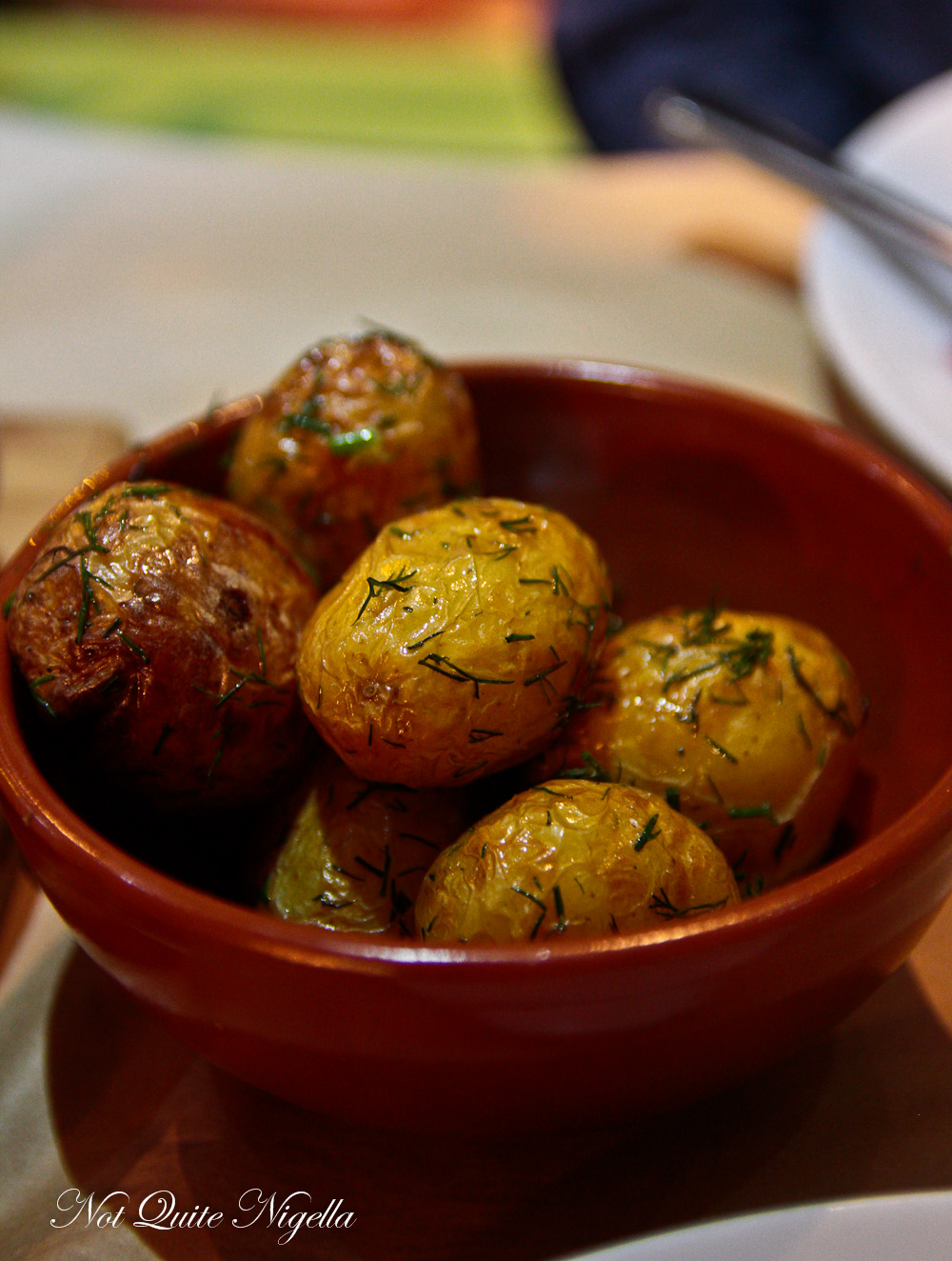 The fantastic small chat potatoes are roasted until golden and seasoned with dill which makes this a natural partner for the fish. 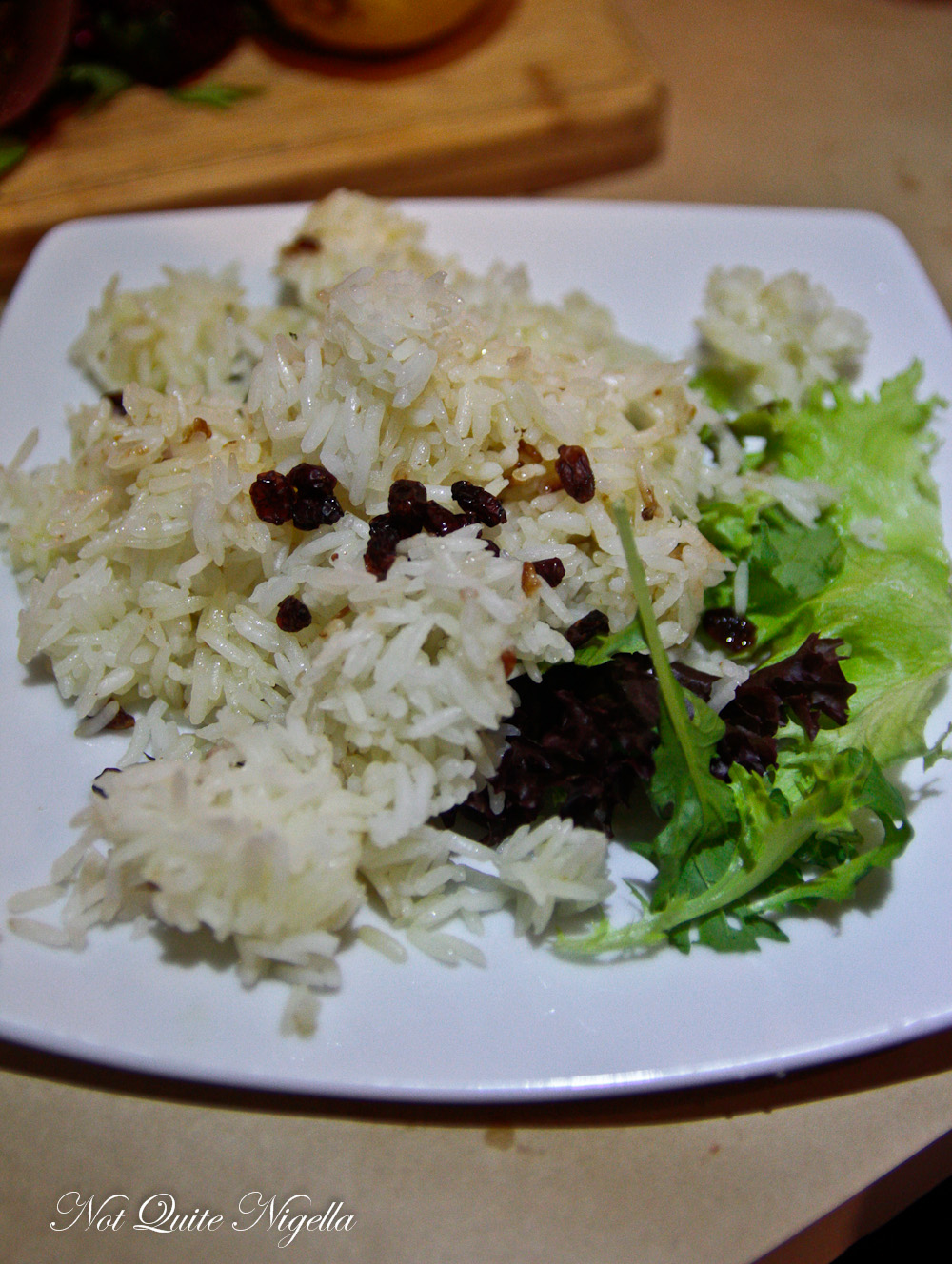 I wish we had ordered another serve of the barberry rice which is a long grain rice with pieces of crushed barberries. When we ask to try some barberries they look like small dark red tiny dried berries and biting into them, they give a lingering tart aftertaste. "You can't eat too many of these at one time" they tell us. 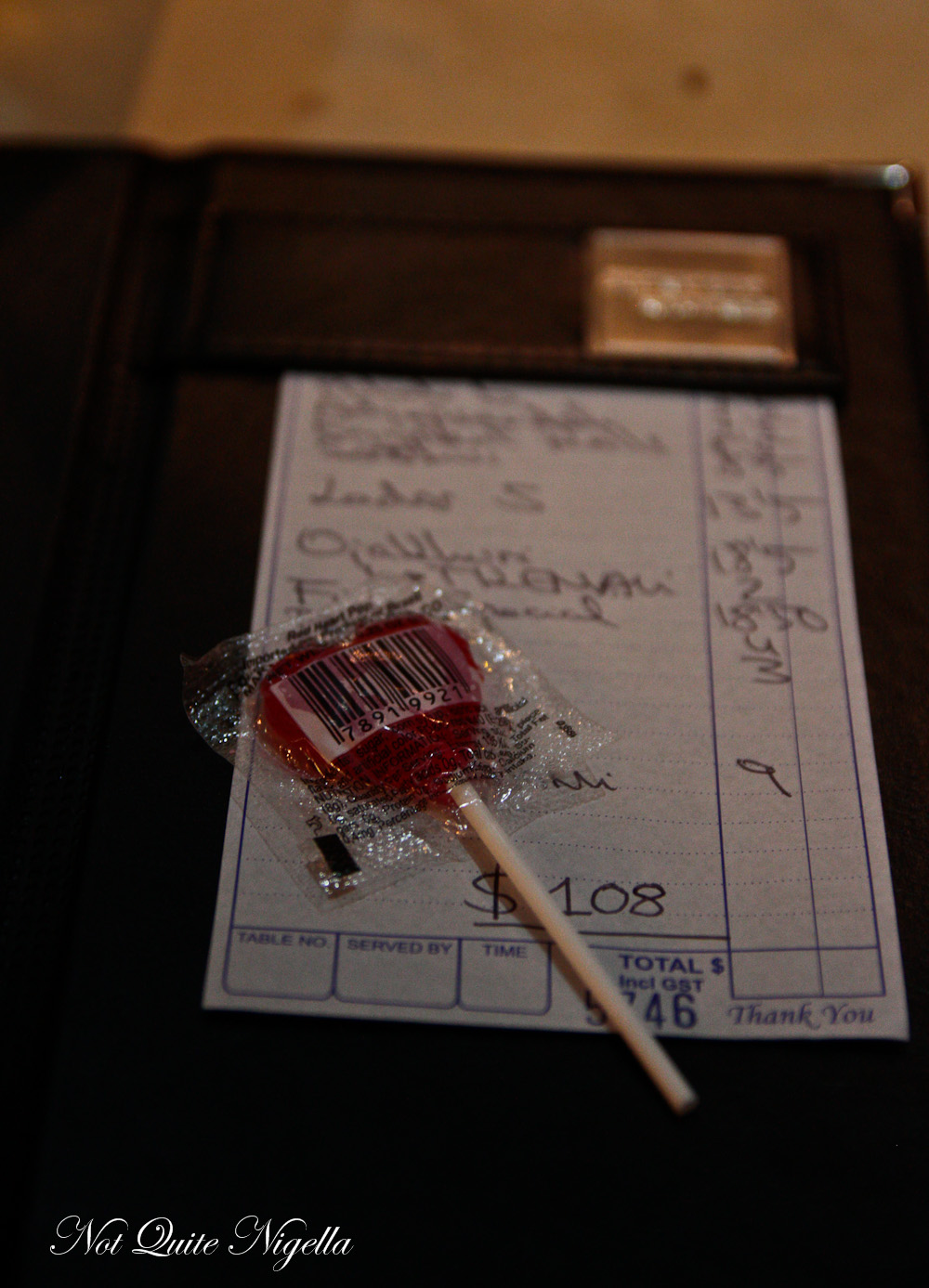 Alas, there's no dessert, despite our excitement at seeing the cafe chalkboard menu featuring a Russian cheesecake. Our bill comes with one red heart lollipop and it's a very reasonable $27 per person. We look out the window at the chef talking to the customers outside. One of them is holding an umbrella the entire time that he is dining and we can't help but notice that he seems nonplussed and busy enjoying his food. "Don't worry, he's Russian he'll be fine. He'll be out there all night" our waiter says.

So tell me Dear Reader, have you ever tried Georgian cuisine? And do you think you can taste the difference between mineral waters? Do you have a favourite mineral water?