Priscilla, Queen of The Imperial, Erskineville 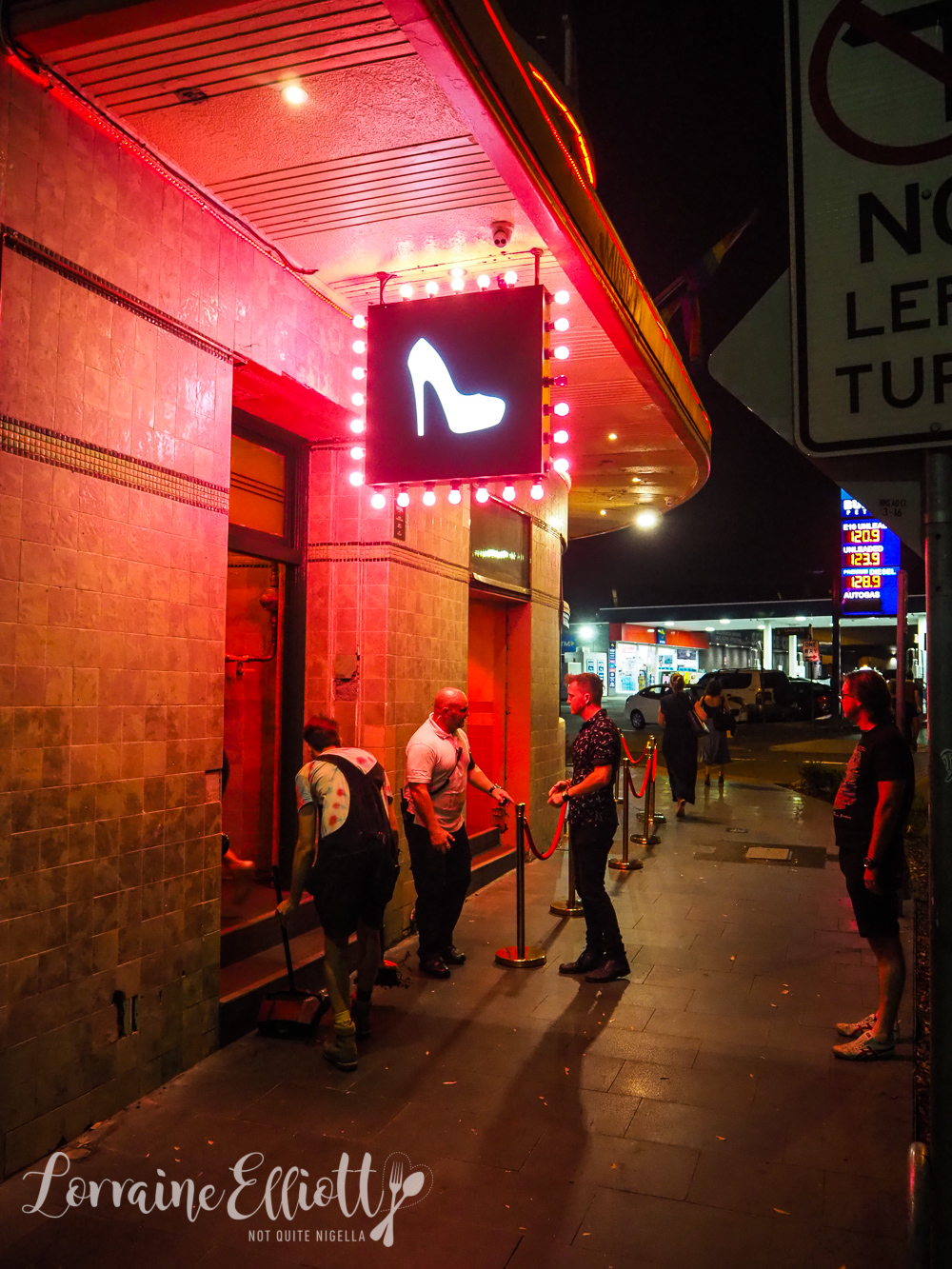 The Imperial Hotel in Erskineville is back and while it is still a bar that still pays homage to its drag queen past with live performances, the new plant based restaurant Priscilla's takes up place where the stage used to be. Try items like Cauli & Broc ‘Wings’, crabless fritters or if you can't go without meat, there's a small protein section and their ceviche bar. 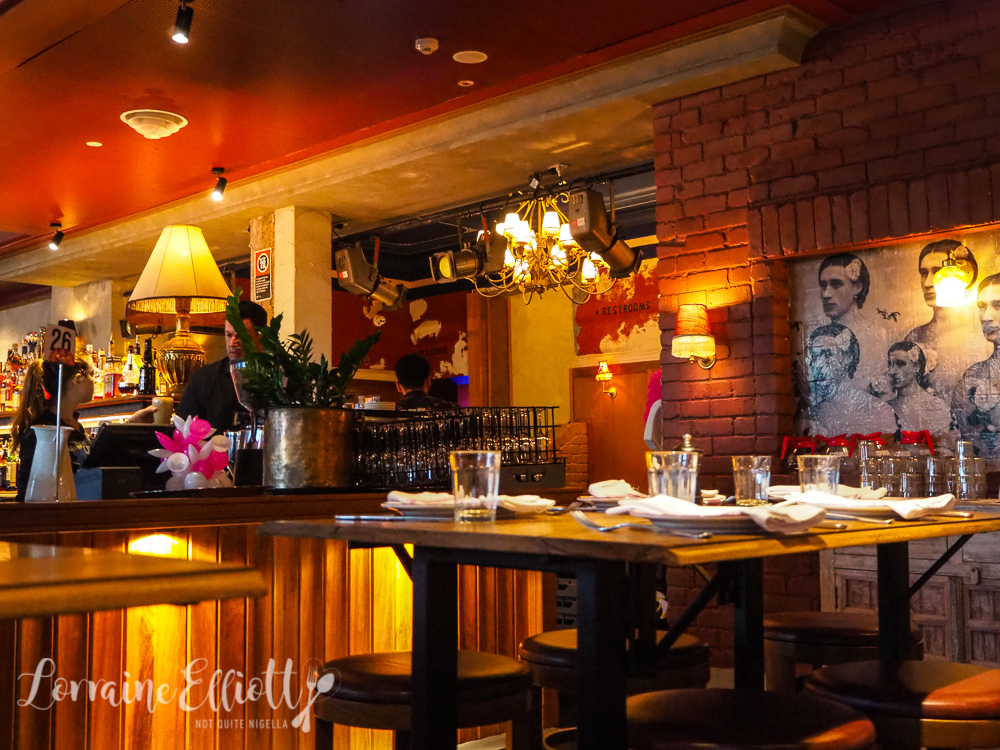 We're about 5 minutes late to our booking at Priscilla's at The Imperial Hotel. It's a place of memories for me, my hen's night was spent here watching a drag show although the current establishment bears little resemblance to the venue many years ago. There is the pub section at the front and adjacent to this is the restaurant Priscilla's with an indoor and outdoor section and large open kitchen. 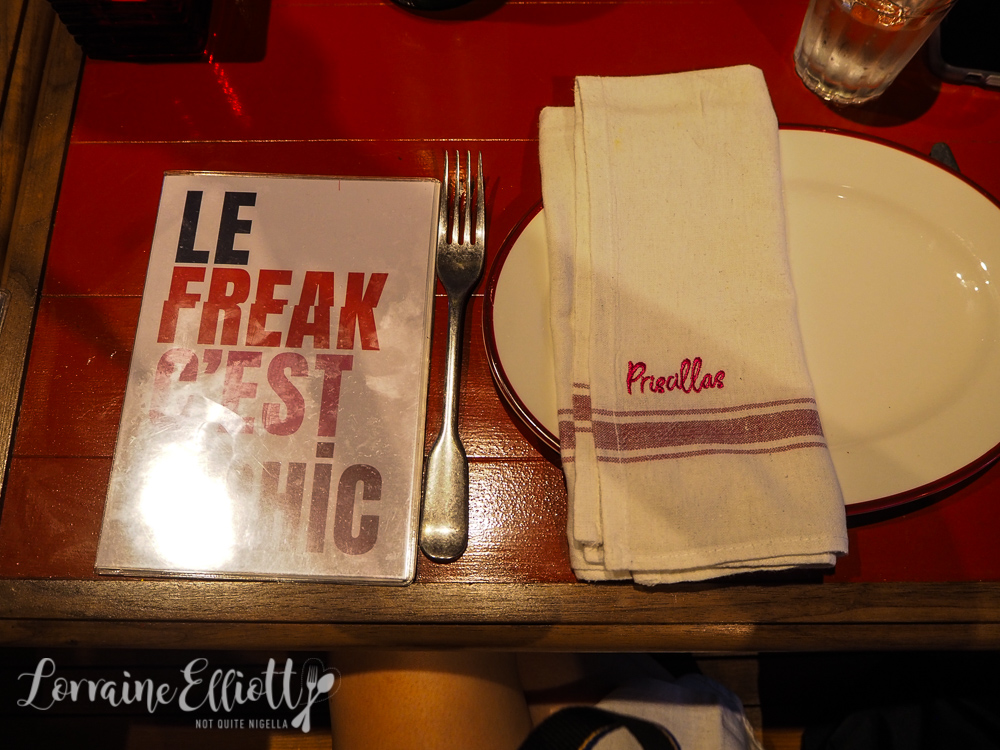 Garth is standing to the side alone tapping on his phone having a gender identity crisis of sorts. He explains that he needed to go to the bathroom and he wasn't sure which door to walk through. You see the bathroom signs aren't marked male or female. Instead they have the gender symbols and he can't remember which one is male and which one is female. Poor guy! I point him in the right direction (although a part of me was tempted to tell him the wrong door as it was the day before April Fool's Day ;) ). 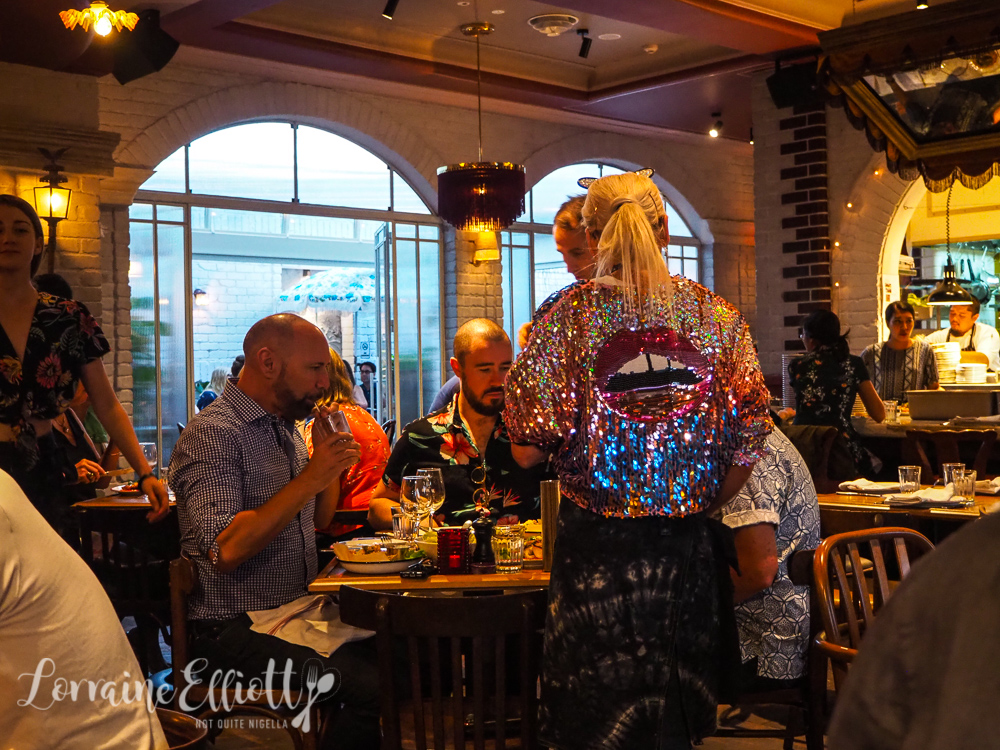 Priscilla's is of course named after the famous Australian movie about three drag performers that travelled across Australia. The menu at Priscilla's has around 75-80% plant based options at a guestimate. There is a ceviche section as well as a small protein section but vegetables really shine here. 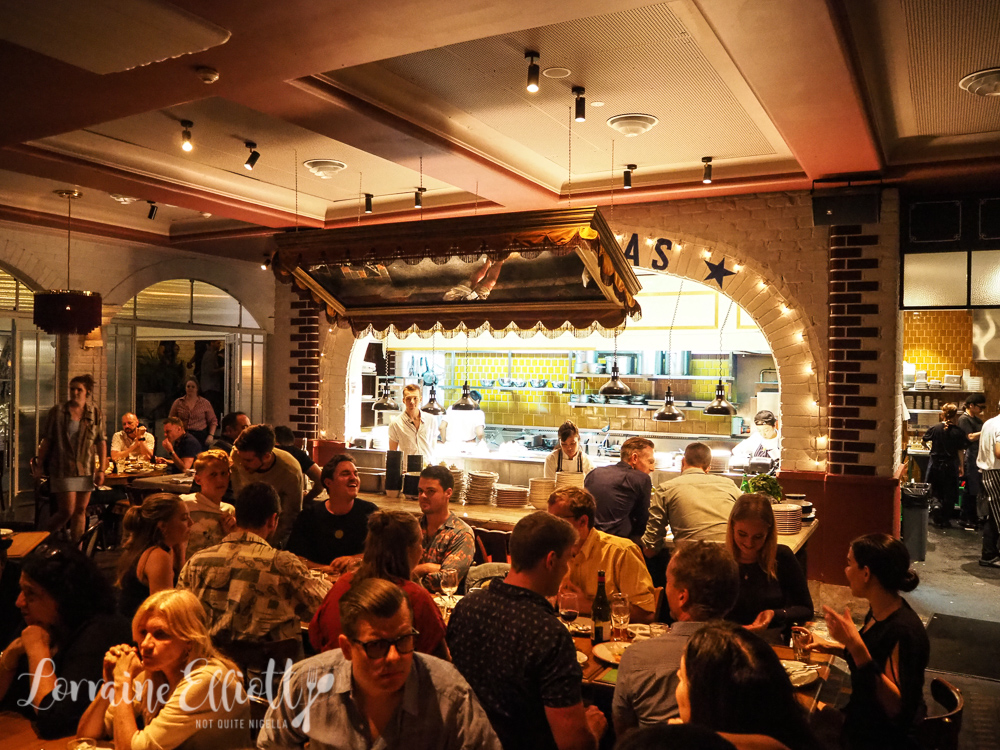 We just happen to also be sitting on one of the benches which is situated right next to the stage. And at 7:30pm drag queen Krystal Kleer will take to the stage for some quick numbers. The staff are very friendly and helpful and service is lovely. 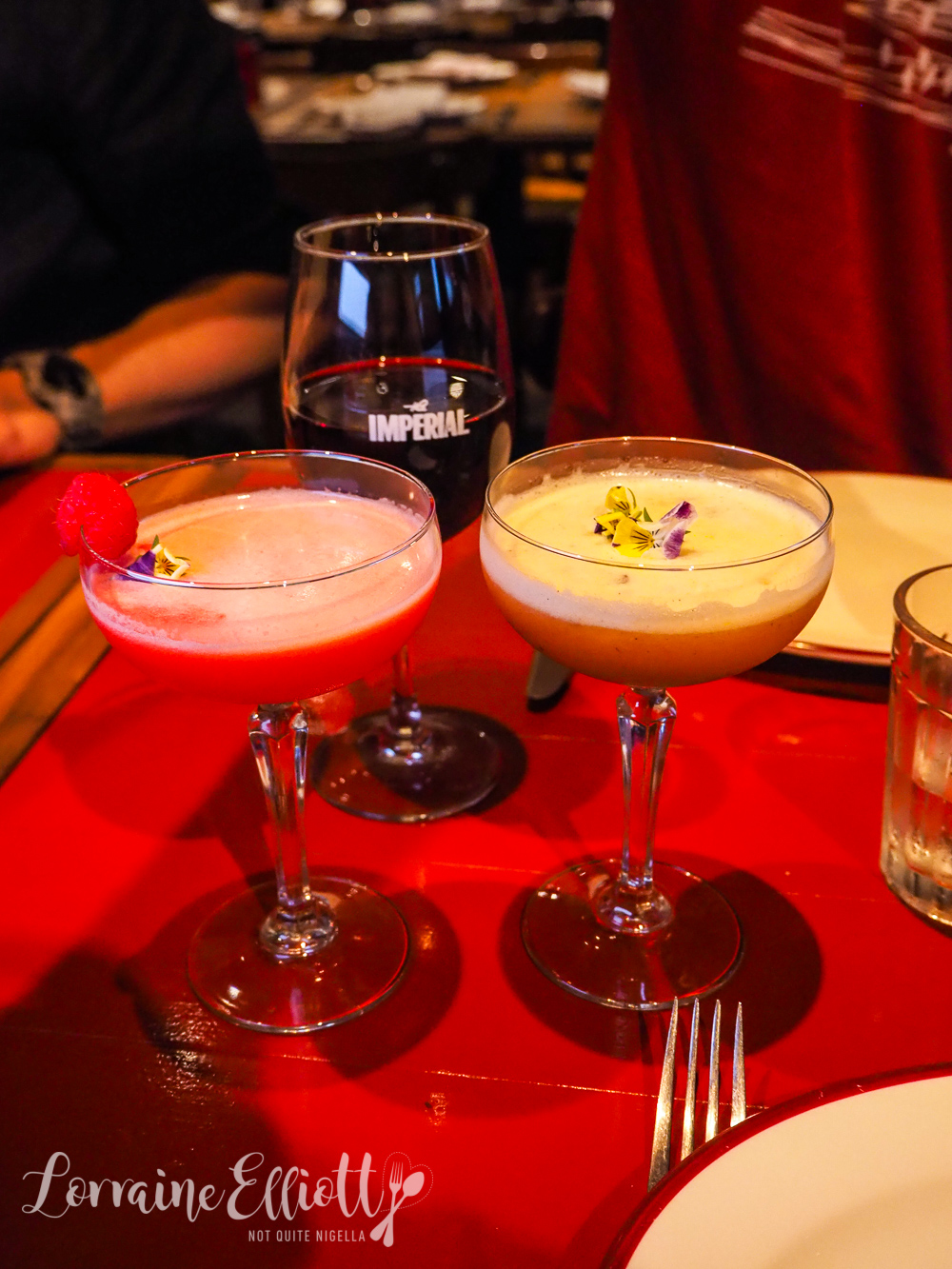 But back to the drinks and food. We order wine and some cocktails. There the Sexy Galexy with Pampero Blanco, Aperol, sweetened lime juice, raspberries-this one's tart (truthfully it's too tart for us). While the April Fools', ordered because April Fools is literally the next day, is all sweet pie flavours with Sailor Jerry, agave syrup and charred pineapple cinnamon puree. 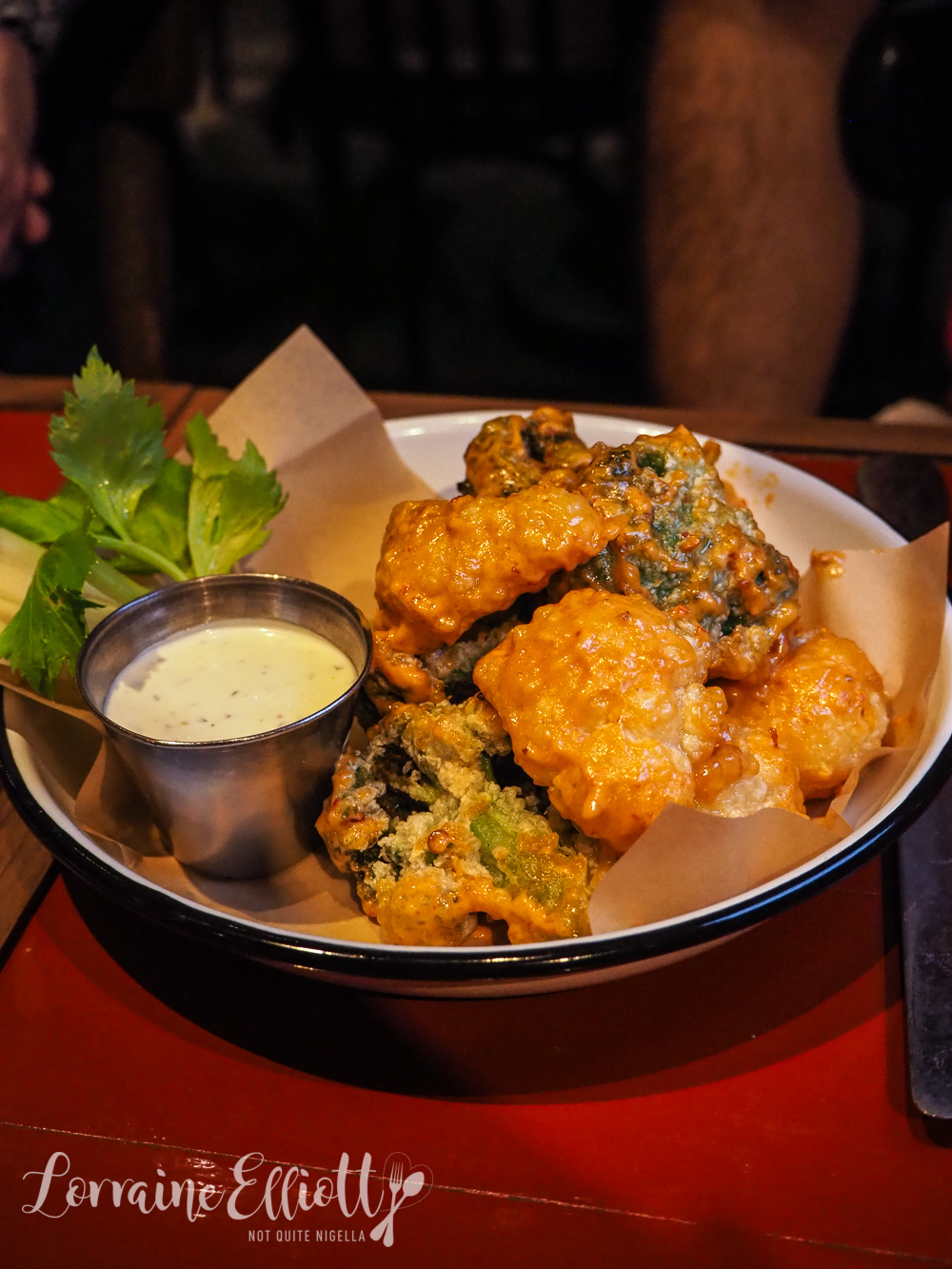 Nina is wearing her highest heels so I offer to go to the bathroom upstairs with her and steady her. By the time we come back all of the food is on the table which is rather delightful. We start with the cauliflower and broccolli "wings" aka battered and deep fried chunky cauliflower and broccoli florets with chipotle mayo as well as ranch and celery sticks, much in the same way that hot wings would be served in the states. There isn't the hot wing sauce (now there's an idea) but they are tasty they tell us that they're one of the most popular items on the menu. 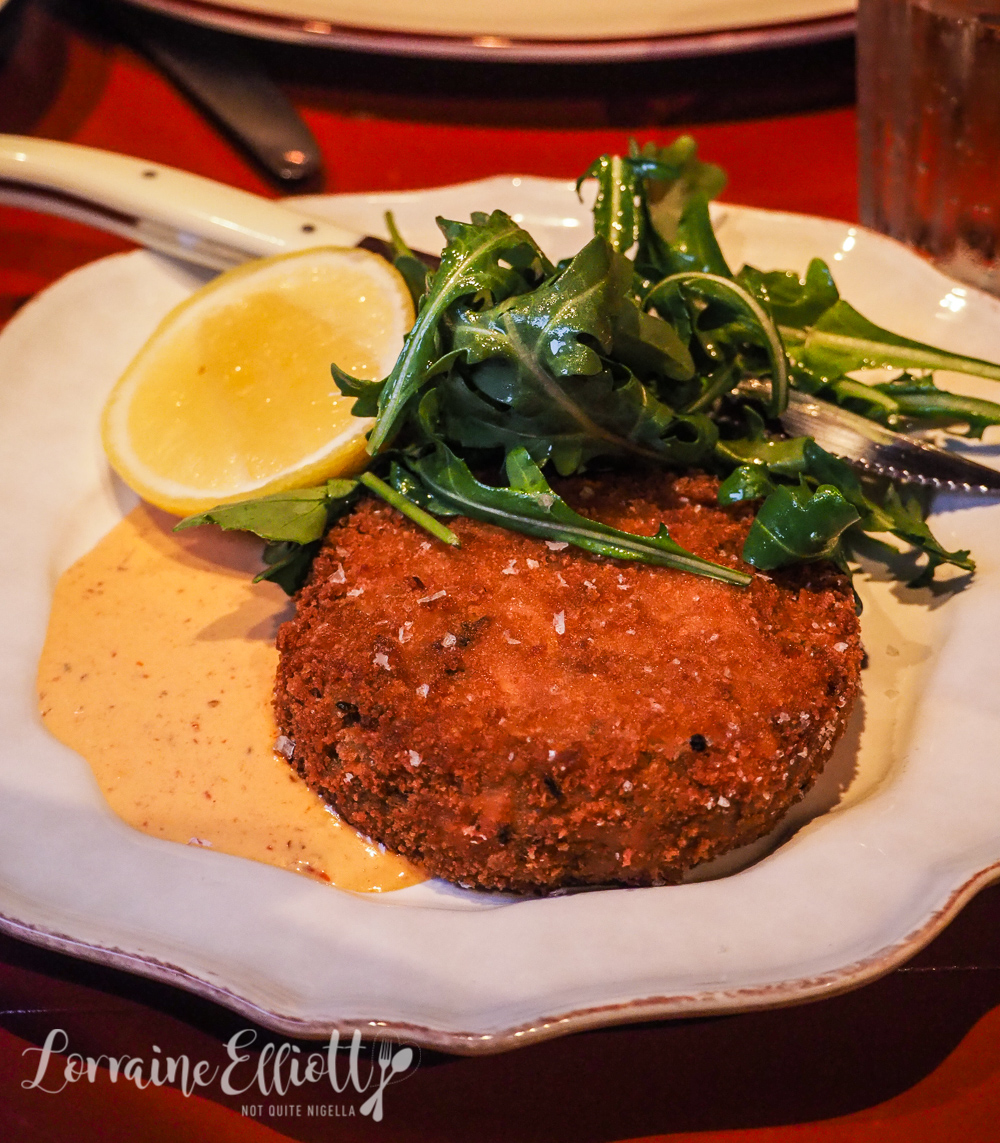 My favourite starter however is the crabless fritter. It's a large, round fritter that although tastes like it contains crab, doesn't at all. In fact it's jackfruit that gives it that texture while they use Old Bay seasoning to give it that crab cake flavour. It's so crab-like that we have to double check its crab status before Nina will taste it. She ends up loving it. 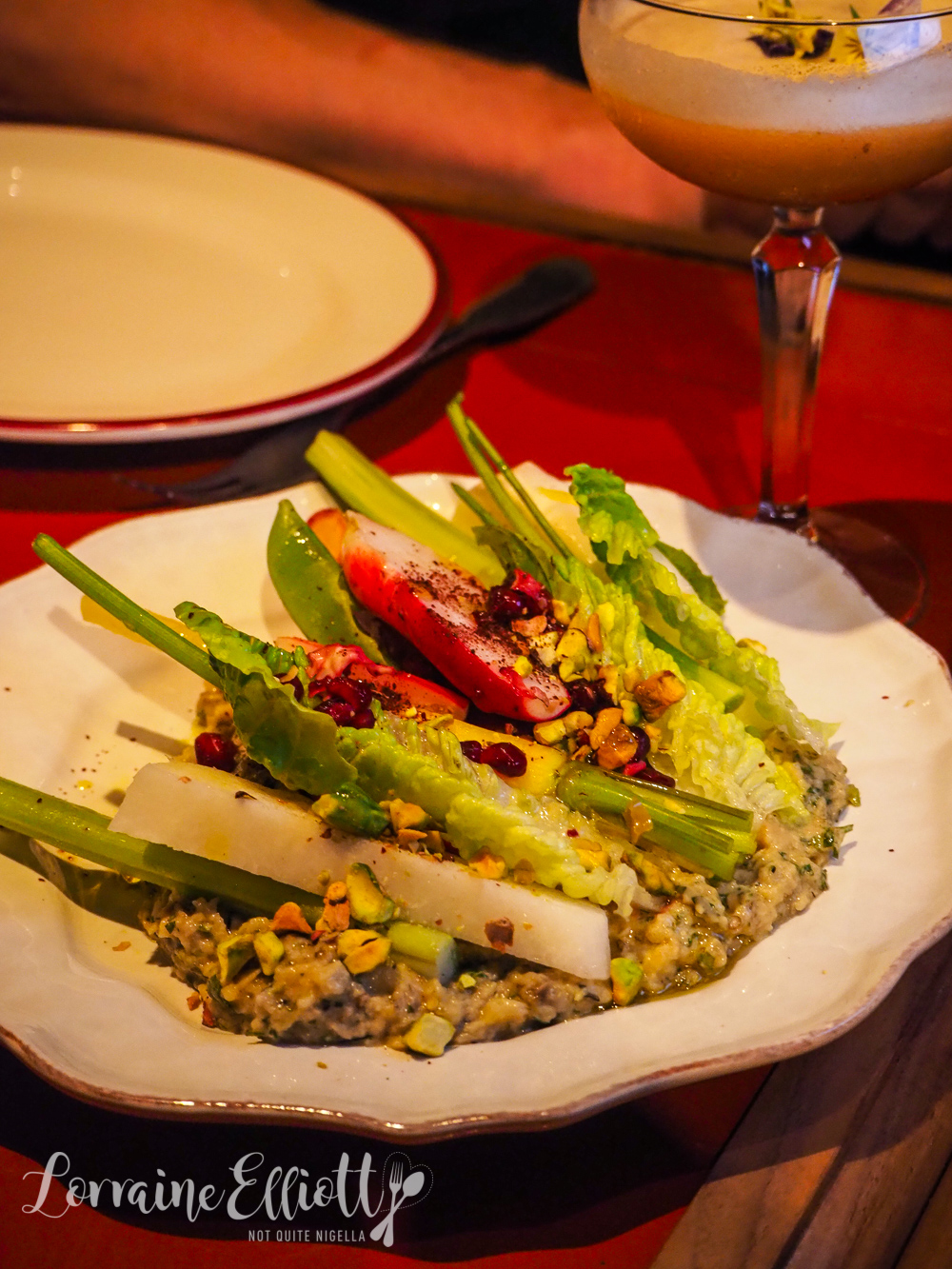 The is more a crudites plate served in a slightly different way. It's burnt eggplant with pomegranate and roasted pistachios with crunchy vegetables on top. This is quite good and healthy tasting. 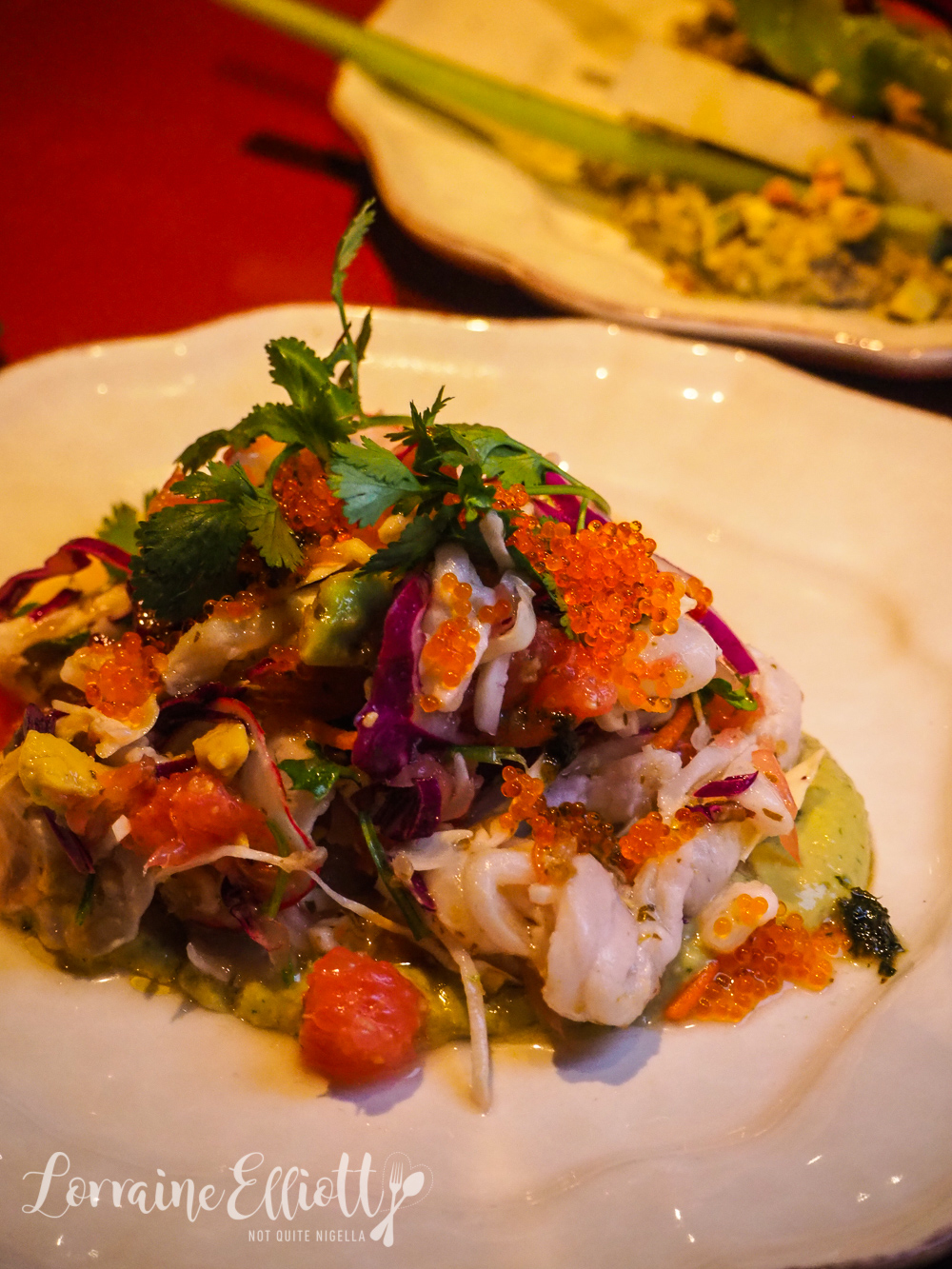 We also ordered three non-vegetarian dishes. The snapper tiradito is all fresh flavours like lime, and grapefruit as well as piquin chilli, basil, tamari, creamy avocado and pops of tobiko or flying fish roe. 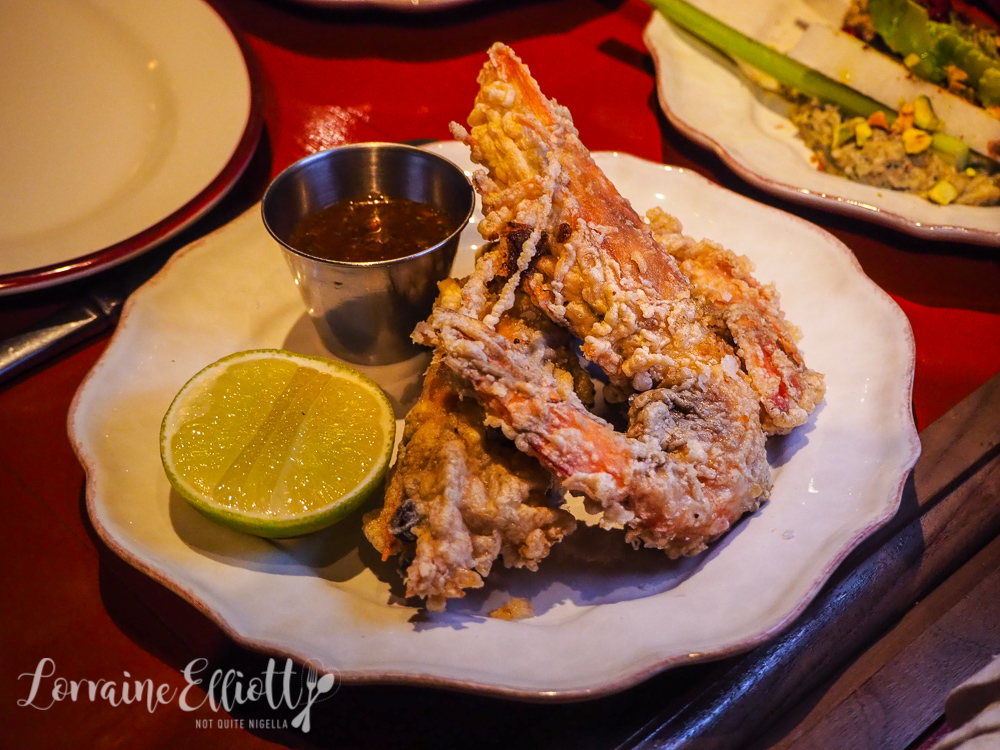 The prawn dish is two enormous king prawns wrapped in lardo. I love lardo (which is essentially cured pork fat #thisiswhyyourefat) but here the lardo is really a bit lost in the batter which is nice and crunchy but I almost forgot that there was lardo here. It says wrapped in leaves but I'm not really sure where the leaves are as it seemed to be a batter. There is a piquant agave, chipotle and lime sauce to the side. 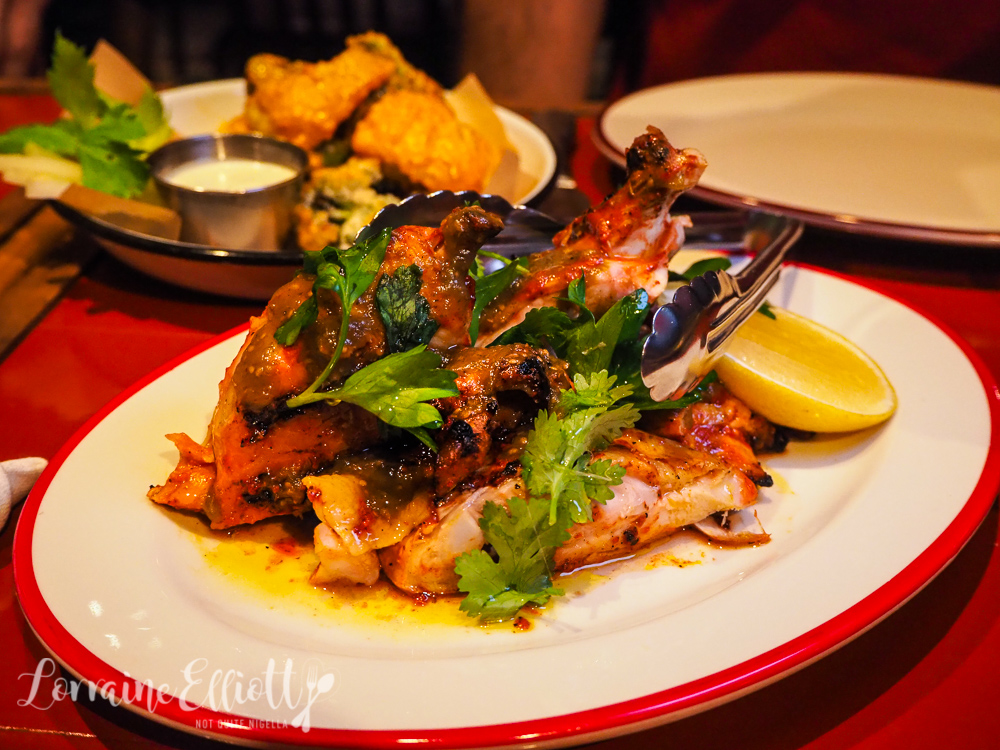 Our last dish, and by now I'm very full, is the wood grilled achiote chicken that is incredibly succulent and juicy. Achiote paste is made from ground annatto seed, a red seed from the achiote tree and it imparts a red and orange colour and a delicious sweet, earthy flavour. The dish says that it is served with a tomatillo salsa, herbs and pickles although it's just the chicken on the plate with a sauce and herbs. 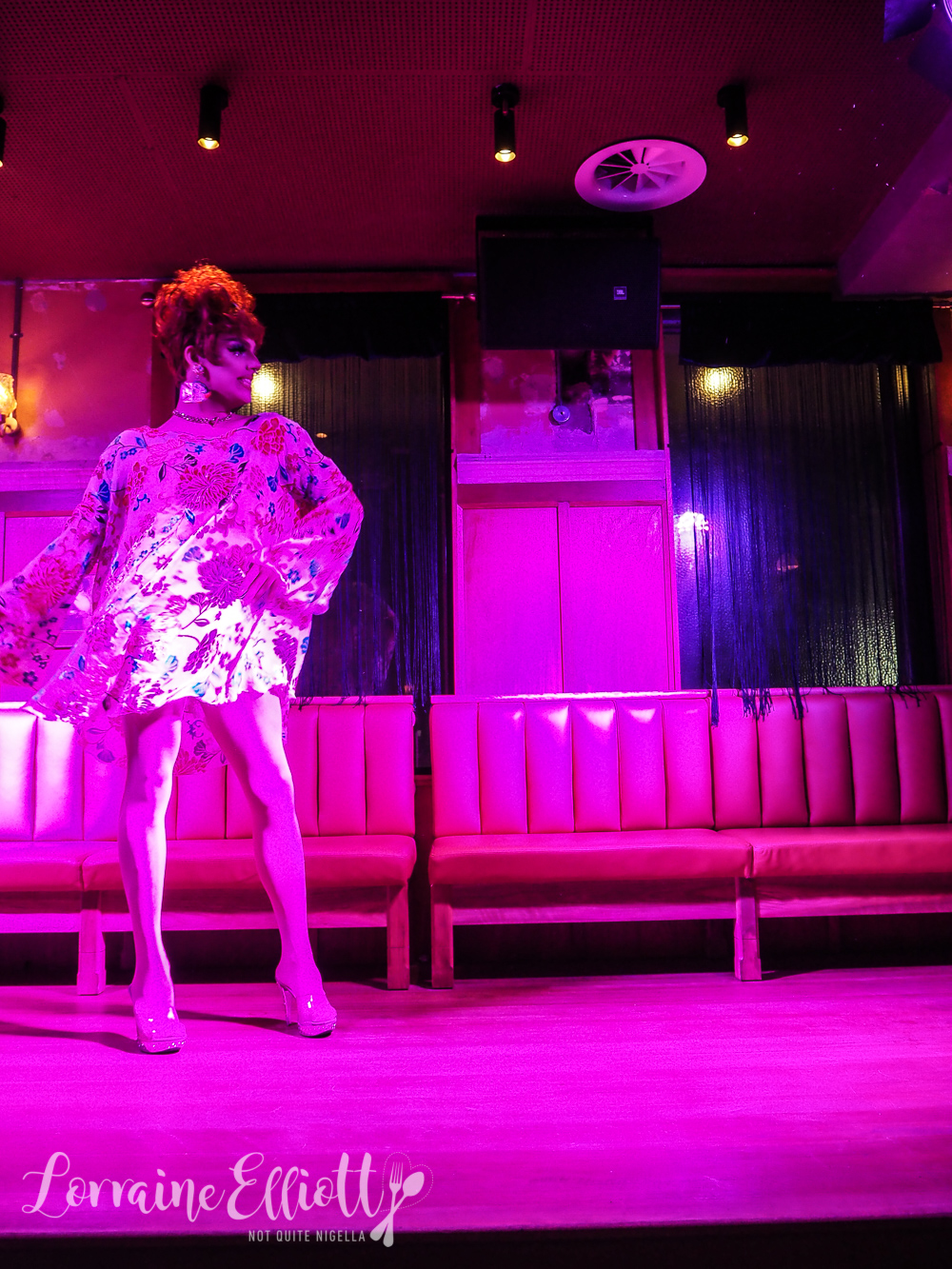 While we are eating Krystal Kleer bursts on stage in front of us and sings "Beauty School Dropout" before disappearing to make a costume change promising to be back in an hour. 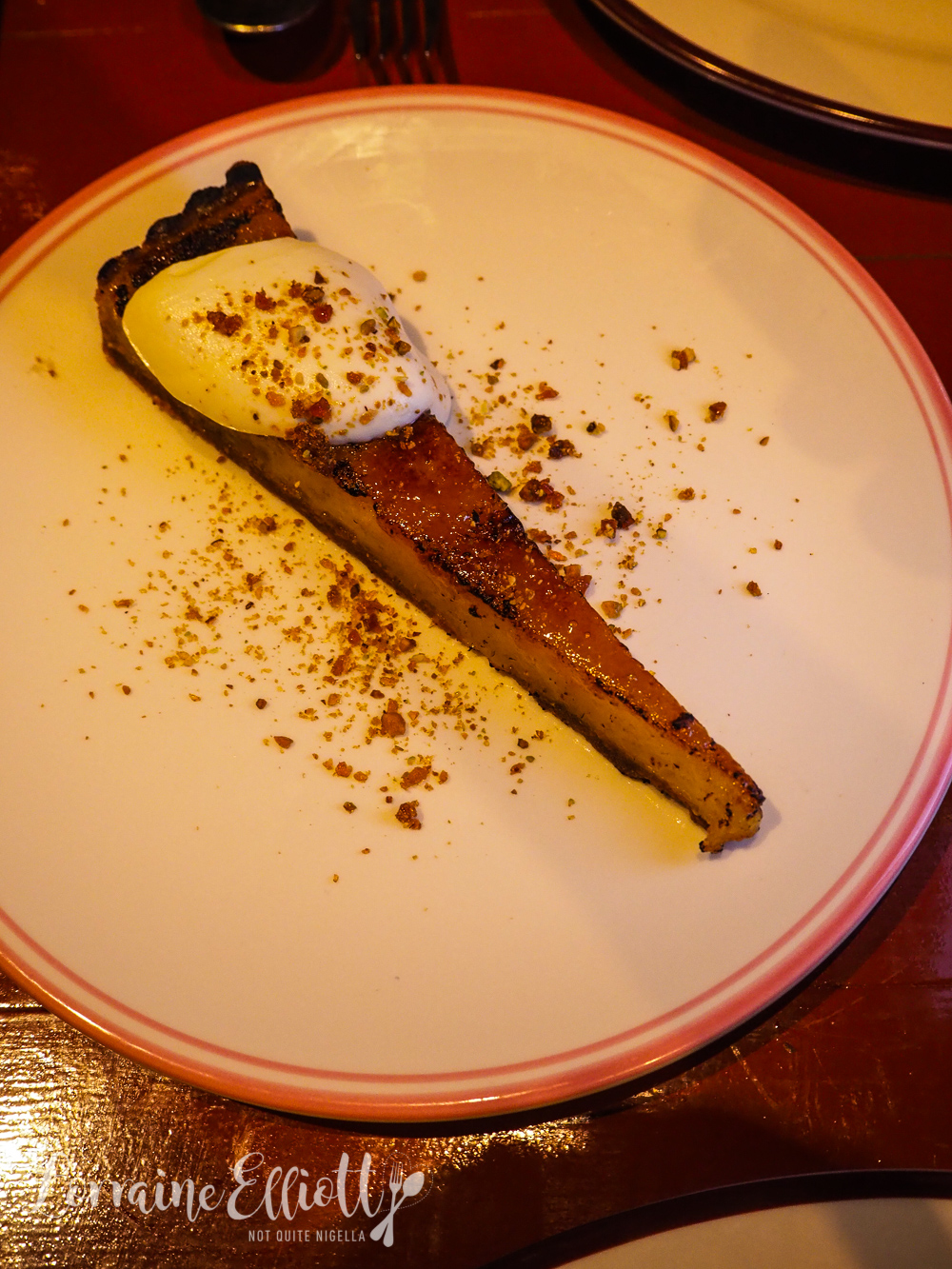 The staff are very attentive and pop down the dessert menu as soon as the dishes are cleared but we ask for a small reprieve while we digest the mains and entrees. We were momentarily tempted to go for the “Keys In The Bowl” Shared Espresso Martini for 4 but chose other desserts instead. The two desserts we end up choosing are opposites in terms of flavour but just as popular at the table. The lime tart brulee sings with zesty lime with a crisp tart crust. On top there is a sour cream chantilly cream sprinkled with pistachio praline crumbs. 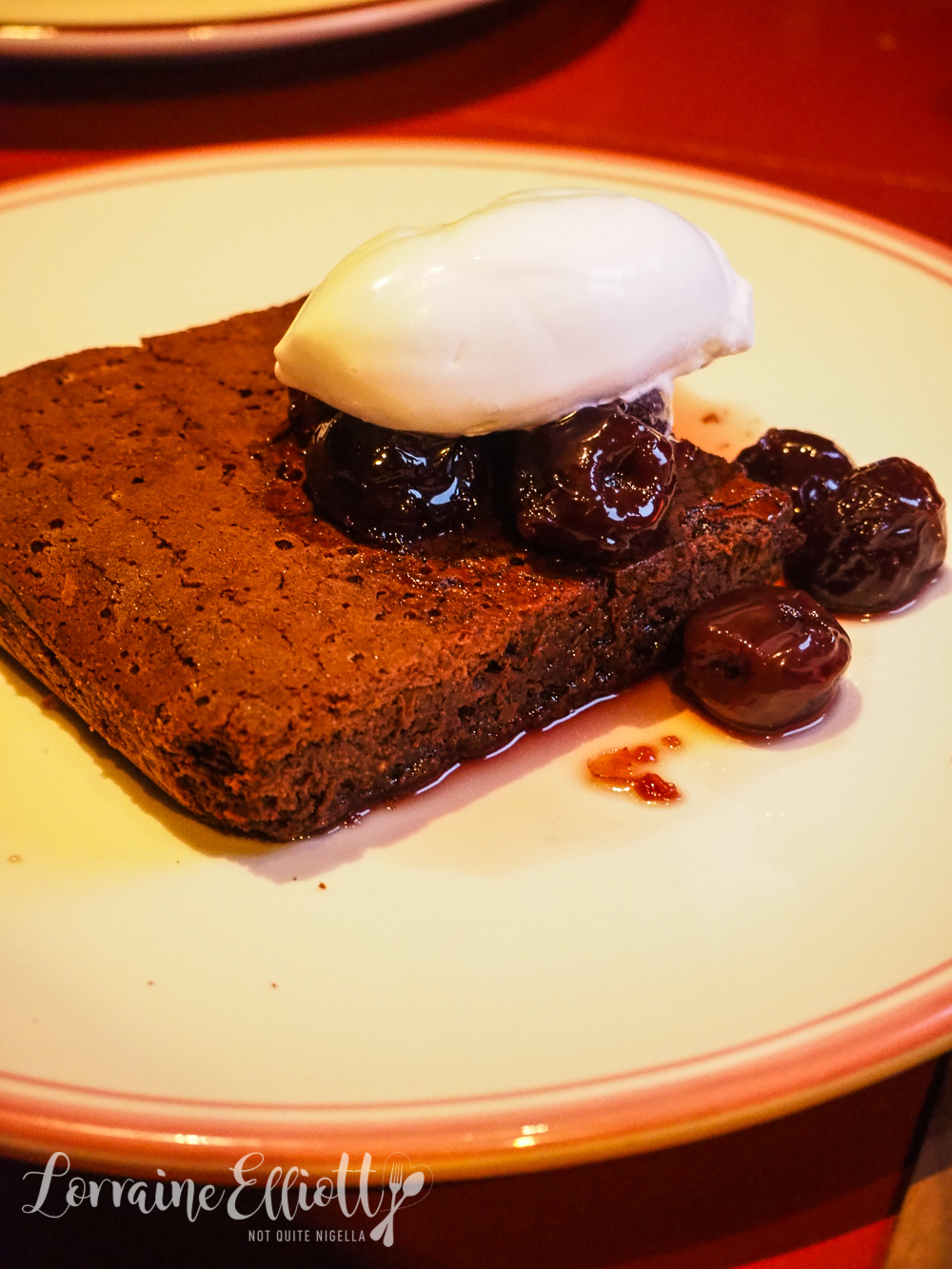 But everyone really swoons for the chilli chocolate brownie that delivers a delicious spicy cayenne pepper kick right at the back of the throat. There's a divine cherry compote and a quennelle of coconut cream to finish it. The brownie is served warmed in the wood fired oven. 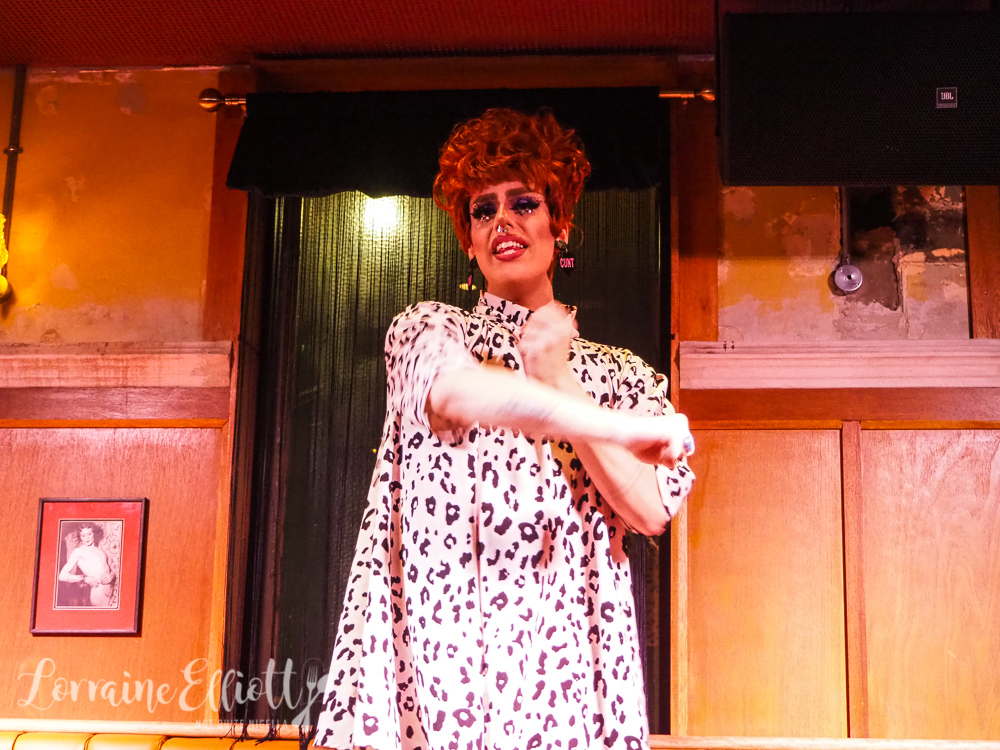 And as if on cue Krystal Kleer comes back on stage to deliver her next number wearing a leopard print ensemble singing a medley of songs, a great accompaniment to our hot chocolate brownie.

So tell me Dear Reader, what do you think of having more plant based options on a menu? Do you know the gender symbols? And do you visit the bathroom is twos or in groups? 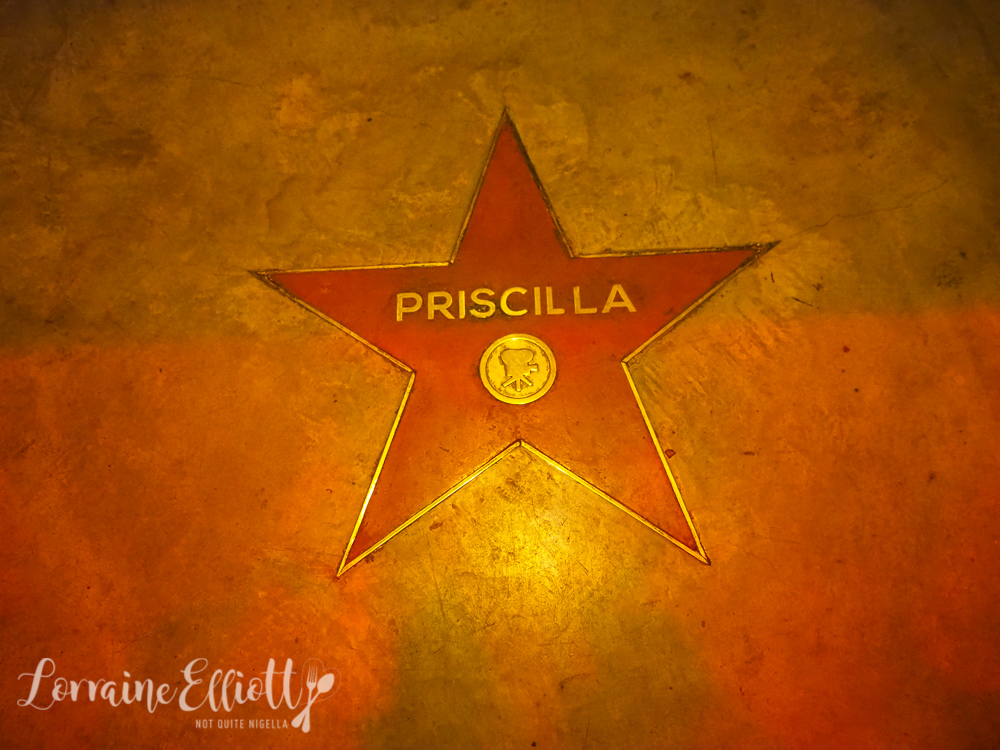