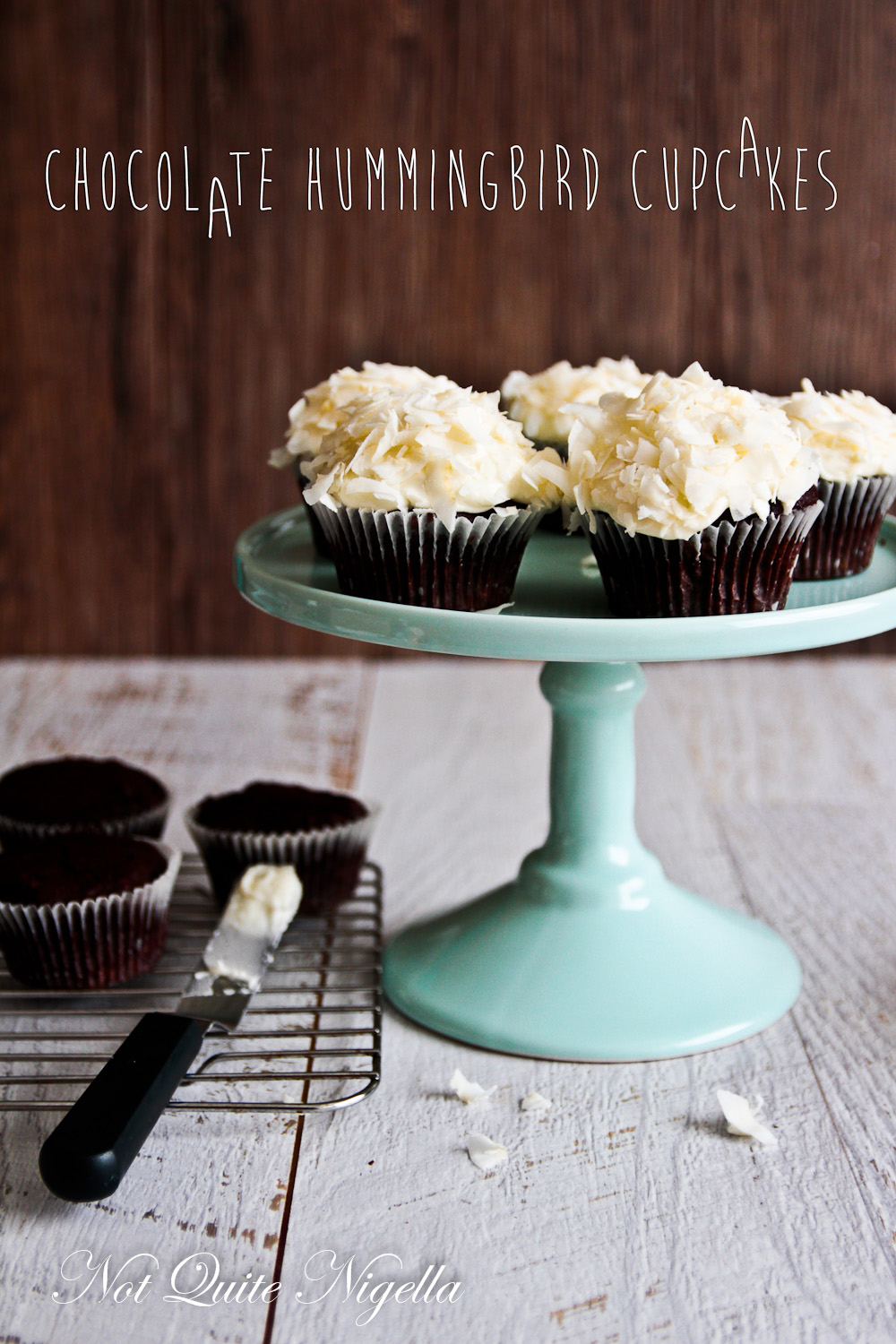 Travelling so much often makes me a terrible friend. For instance, it took me almost nine months to make a date to cook with my friend and hairdresser Elly. Sure I've seen her for haircuts in the meantime, but months ago I promised to show her how to make hummingbird cake. Every time I would see her I'd say that I hadn't forgotten. However it was when I came home unexpectedly early from my travels (my computer died a horrible death which meant that I had to postpone my second trip to London and Scotland sob,sob) that I found myself with a glut of time. Time! Where have you been these past few years? I've missed you!

Elly was one of the first friends that I contacted and I finally made good on my promise. A few days later during one of Sydney's torrential flash floods, she came around to cook hummingbird cupcakes with me. It was the perfect weather for baking and for being indoors. She gently chided me over my Cousin It fringe and told me funny stories about her new boyfriend Sebastian who she is now living with. 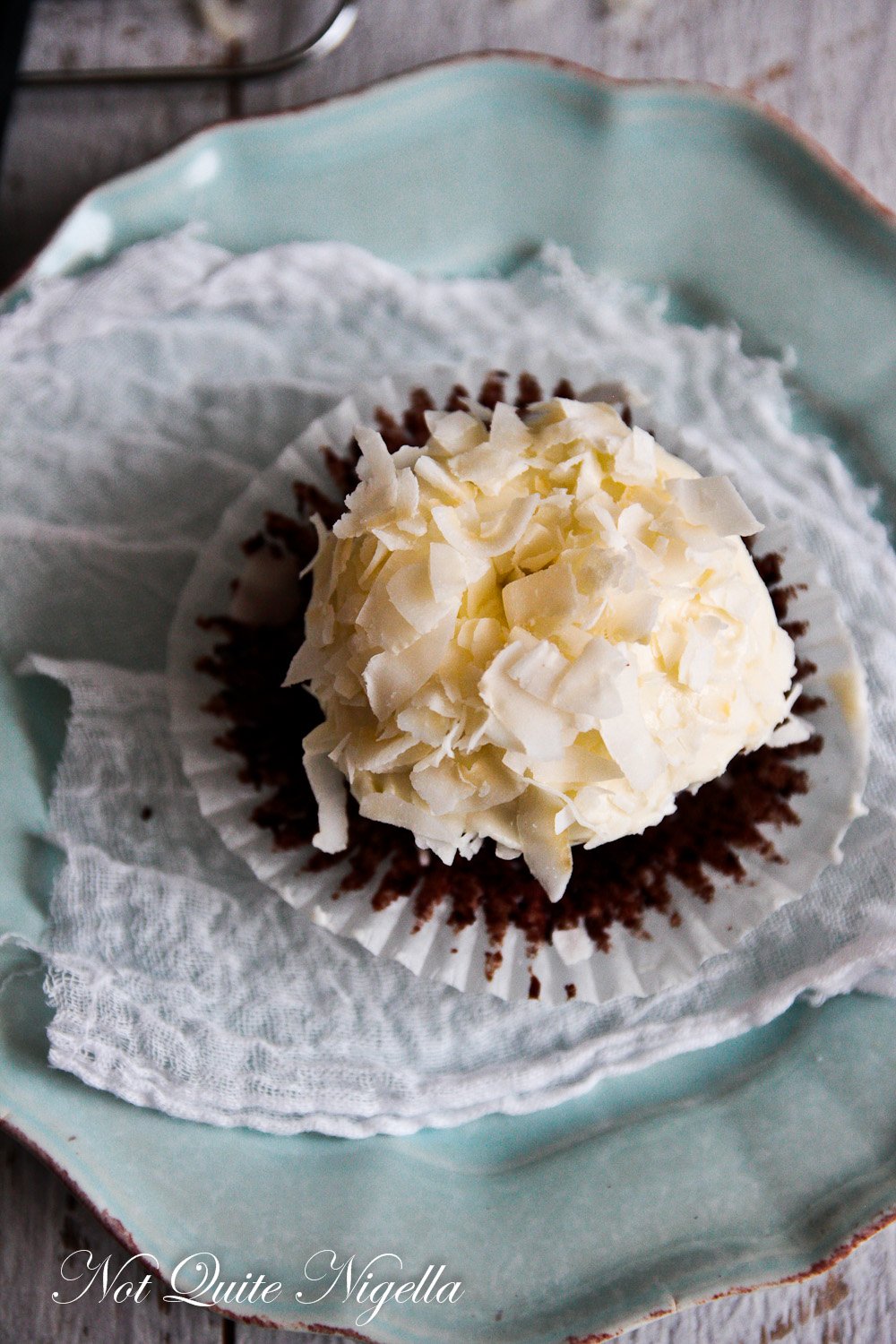 Long term readers may remember that we adore her so much that we set her up with Mr NQN's brother Manu in the hopes that she would become one of the family. While they got on well and remain friends, they have now both found different significant others and Sebastian is a nice guy that we both like. And not just because she has volunteered him for any handyman duties around our place. Payment would be in food and lots of it because like Mr NQN, Sebastian likes to eat.

"I even teased him so much about his appetite that he actually wormed himself!" she said giggling. 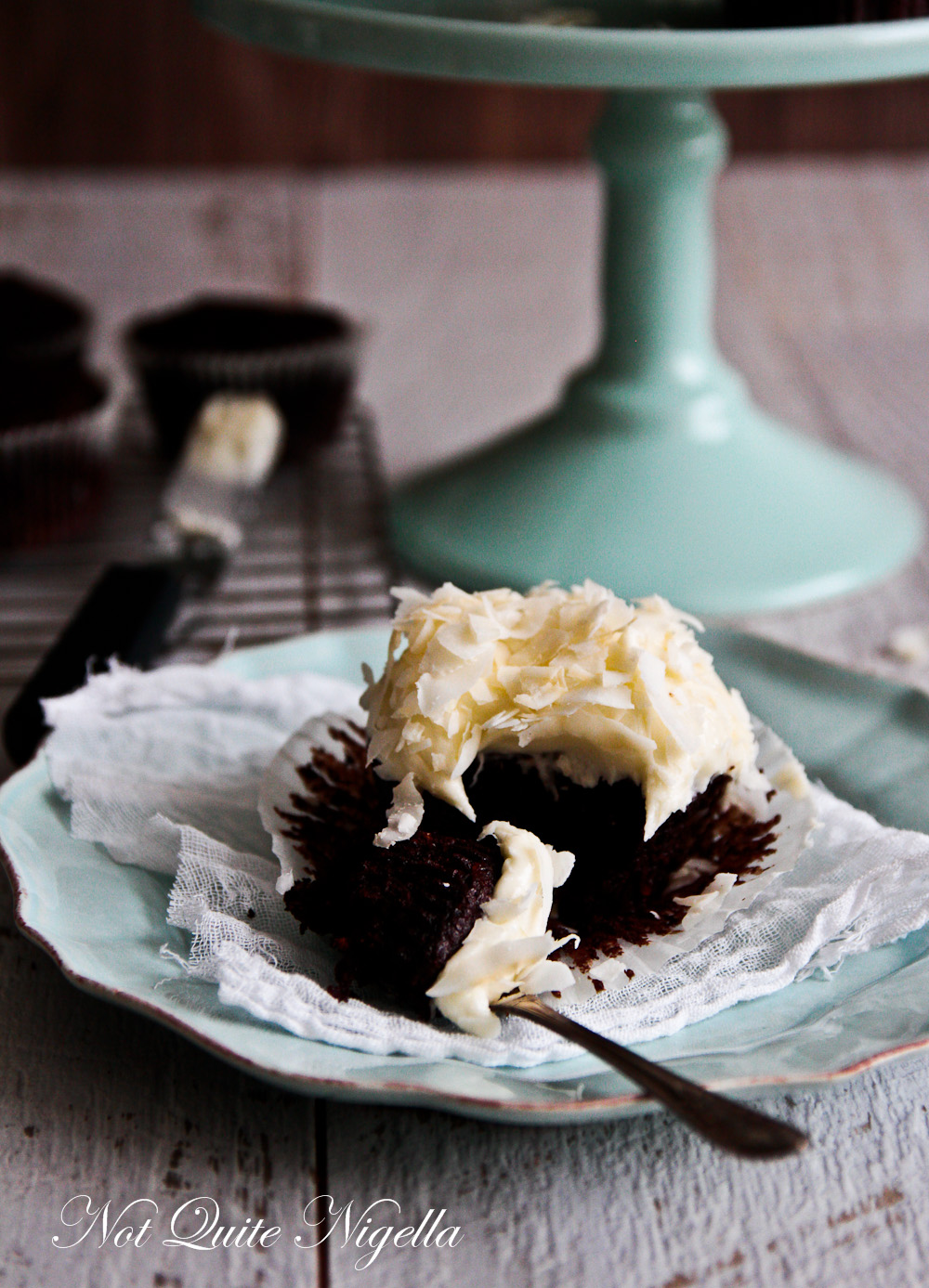 We decided to make an alternate version of the hummingbird cake, a chocolate hummingbird cake. It would be the best of two worlds - the rich flavour of chocolate with the moistness of pineapple and the crunch of walnut and coconut. We had a fun afternoon baking these cupcakes which was only interrupted by a news report showing cars in Elly's suburb semi submerged under water. Yes, sometimes, you are just meant to bake with friends. 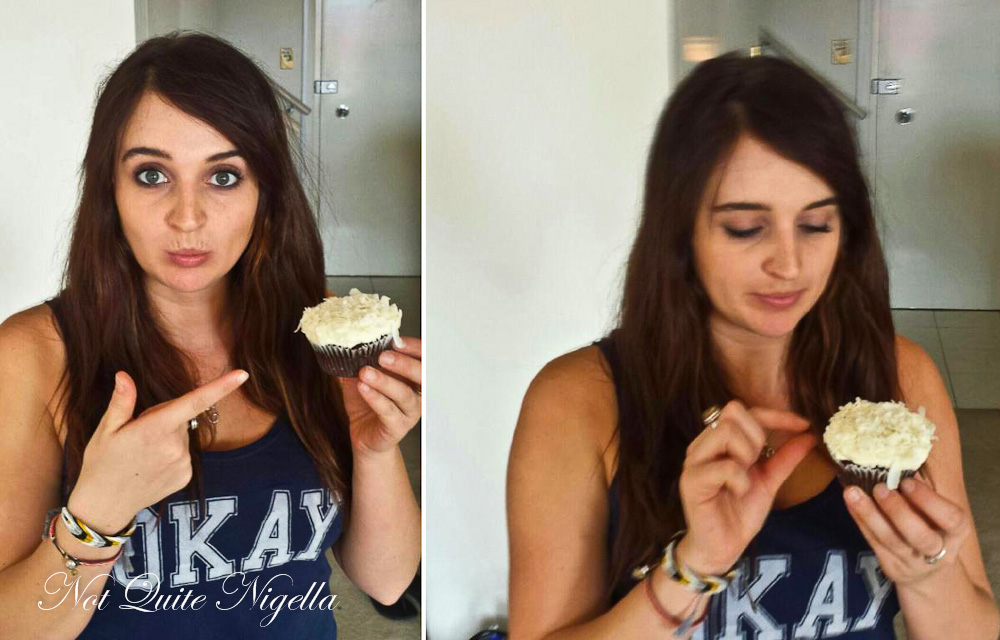 Elly and her cupcake

We ate cupcakes with cups of tea and looked out at the rain dreading both our departures into the deluge and I sent her home with eight of these delectable hummingbird cupcakes. They are definitely worth making if you like cupcakes that have the goodness of fruit and nut with the rich decadence of chocolate all topped with everyone's favourite icing (cream cheese - yum!) with a hint of coconut imbued within. Because all you need when it storms is baking, friends and cupcakes.

So tell me Dear Reader, when it rains, what do you like to do? Dance in the rain, watch movies, bake or something else? And do you enjoy thunder and lightning? I'm totally terrified of both! 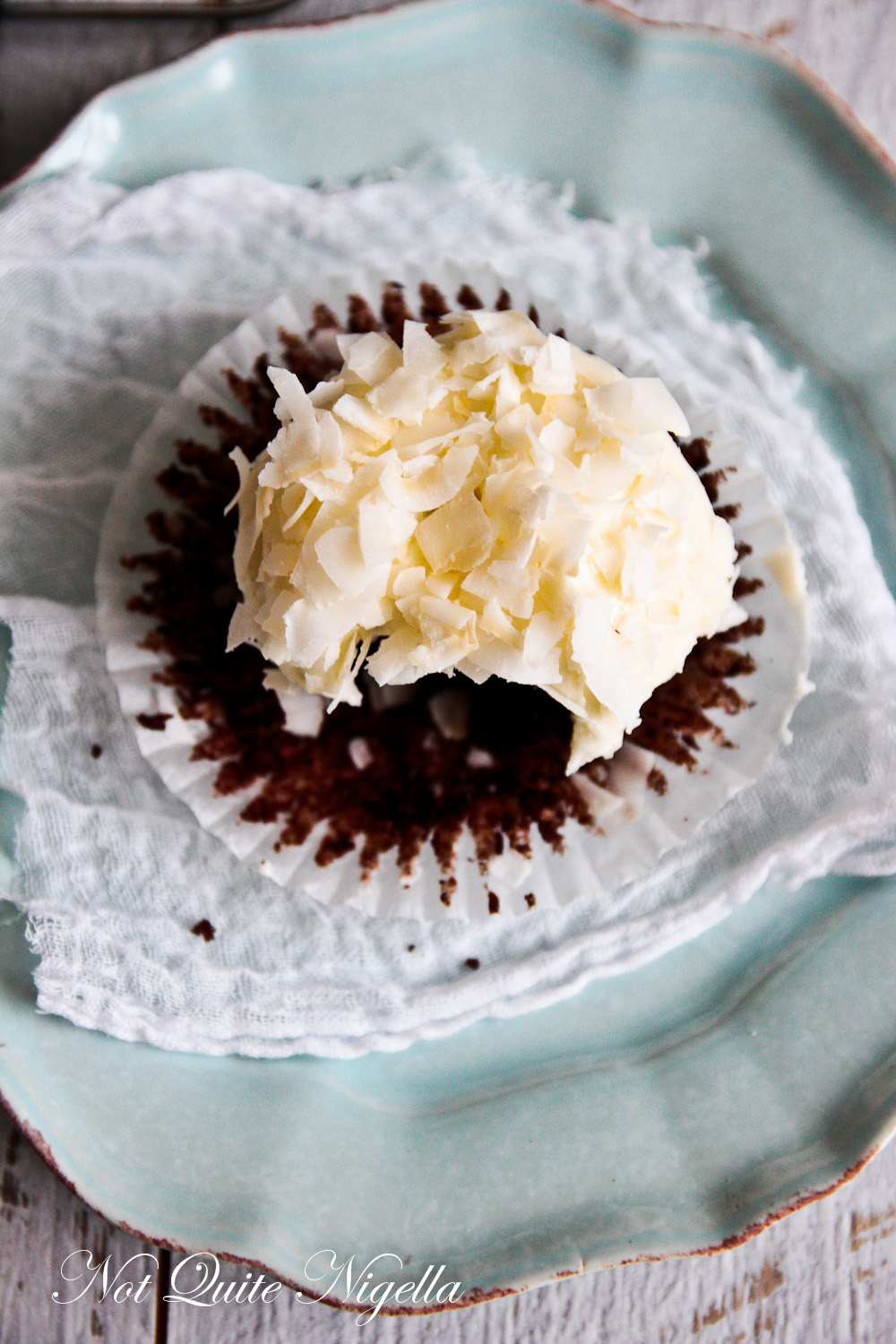 Preparation time: 15 minutes for cupcakes, 5-10 minutes for frosting (can be done while cupcakes are baking)

*To make cake flour, place 1 tablespoon of cornstarch in a measuring cup and fill to the 1/2 cup mark with plain all purpose flour.

Step 1 -Preheat oven to 160C/320F fan forced. Line a baking tray with cupcake liners. Drain the juice from the pineapple very well pressing down on the pineapple through a sieve. In a large bowl, place the cake flour, cocoa powder, brown sugar, coconut, walnuts, baking powder, bicarb, cinnamon and ginger and whisk to combine. 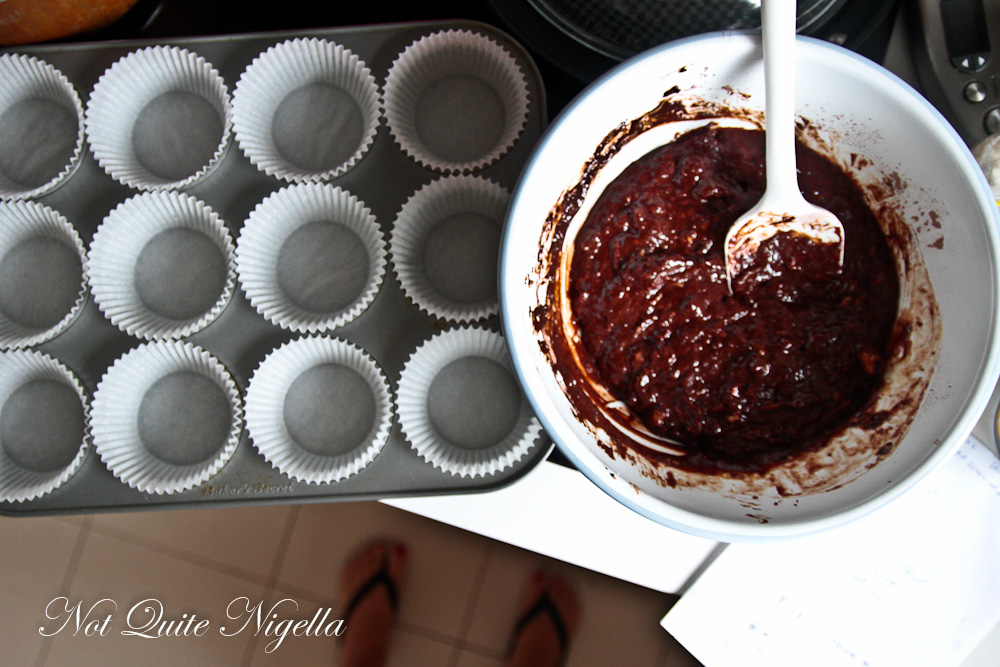 Against all OH&S regulations, I bake while wearing thongs...

Step 2 - In a jug add the banana, oil and egg and whisk well until combined. Make a well in the centre of the flour mix and incorporate the banana mixture as well as the drained, crushed pineapple. Mix until just combined and then spoon into the cupcake liners. Bake for 20-25 minutes checking the centre for doneness with a skewer. 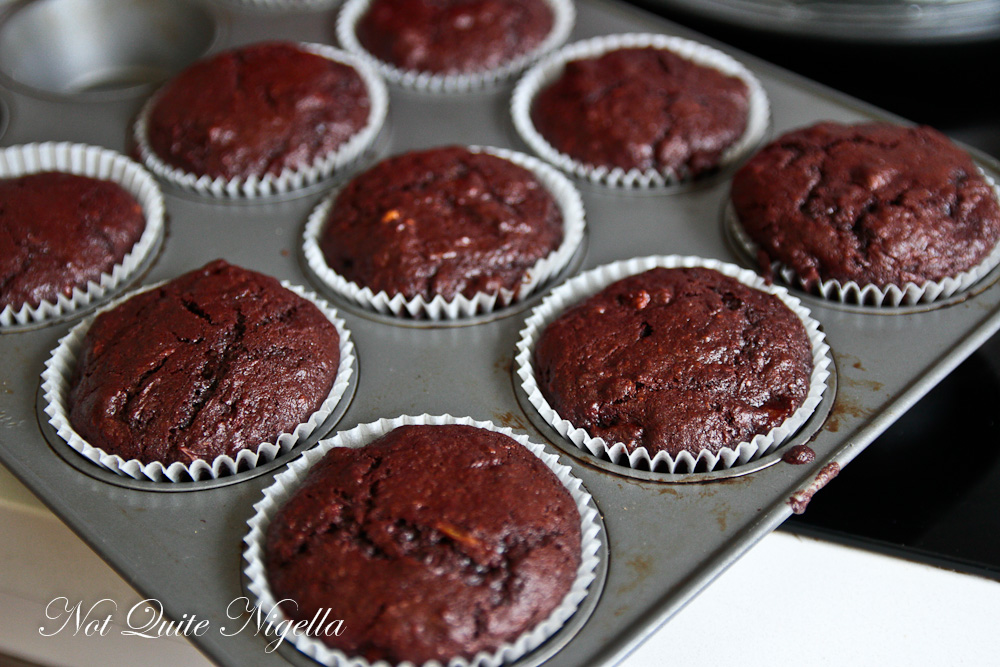 Step 4 - Once the cupcakes have cooled, spread the cream cheese icing on top and then roll the top in the coconut.