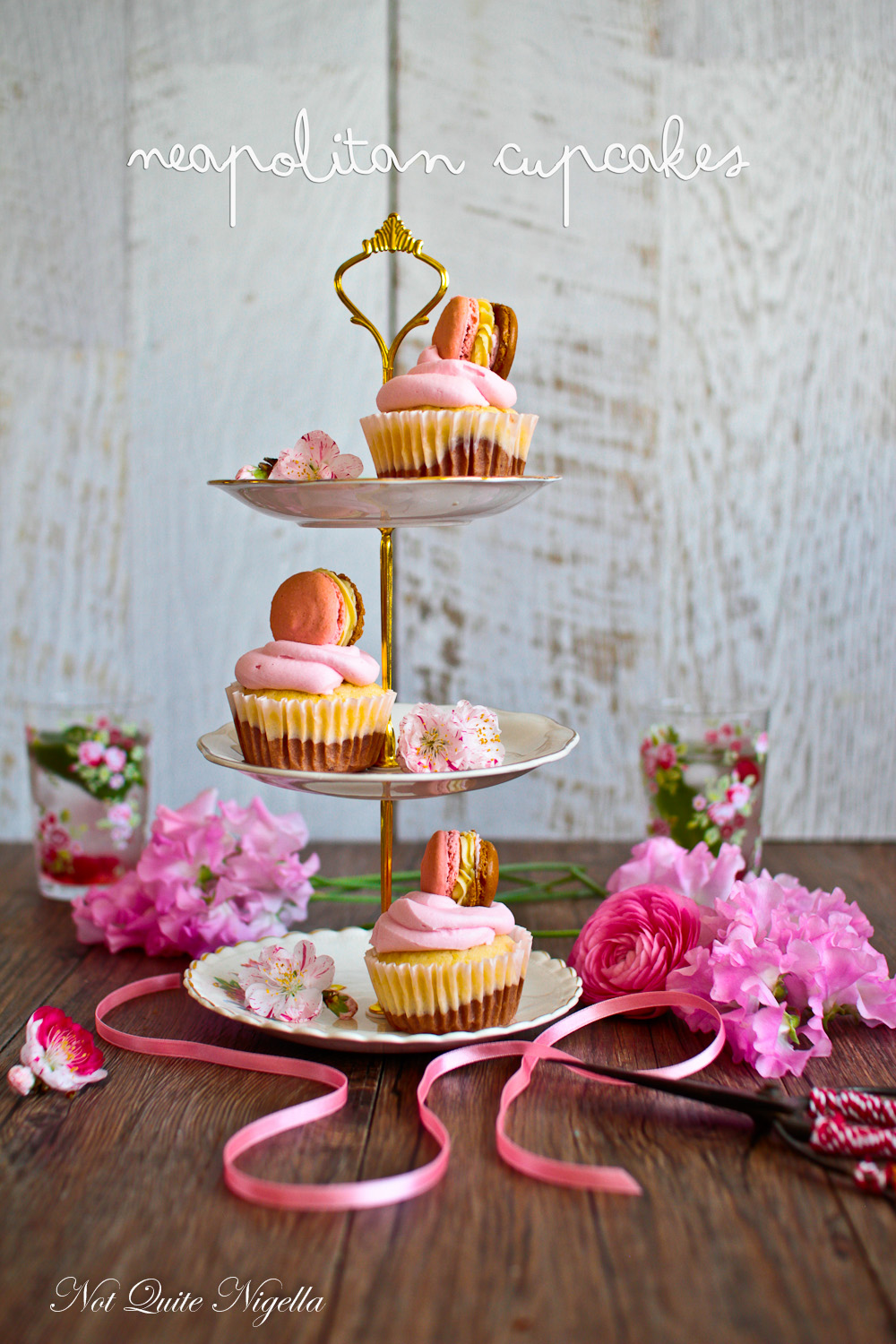 Love Neapolitan flavours and cupcakes but want to try something a bit different? How about some Neapolitan cheesecake cupcakes? These single serve cheesecakes have two cake layers: one chocolate and one vanilla. On top is a strawberry buttercream and resting atop that is a tri coloured macaron!

I wouldn't ever lie to you Dear Reader, these cupcakes are a bit fiddly but they pay dividends when you serve them to people. The difficulty is not in the cupcake itself, that is really quite simple. The difficulty involves making one of my least favourite things: macarons. Feel free to buy these (I believe Zumbo sometimes sells Neapolitan macarons) to save your sanity or at least buy the shells and then put them together. But I have to admit that they weren't quite the same without the little Neapolitan macaron on top. The cupcake itself is a light Japanese style cheesecake in chocolate and vanilla, inspired by black bottomed cupcakes but in a super light cheesecake form.

Recently, my friend Belinda has been having some food issues with her 12 year old daughter. Long time readers may know Mia, you know the girl that is probably going to be the 21st century Mother Theresa. She is the one that collected tins of food for needy families instead of candy at Halloween. Well she is also the girl that when bullied at school advised her mother Belinda (who had come up with a snappy one liner) that she would instead, "Treat the girls with kindness."

I know right? Mature beyond her years. And I was with Belinda with the snappy one liners.

Anyway, Mia decided that she would be vegetarian for animal cruelty reasons. This has not pleased her Greek grandmother Jenny (Jenny of the amazing Patsavoura and Pita). When Belinda asked Jenny what she thought of her granddaughter taking on a vegetarian diet Jenny breathed in deeply and looked straight into Belinda's eyes.

"I am ANGRY!!!" she said exhaling deeply, her eyes flashing, the words coming from the deep centre of her soul. 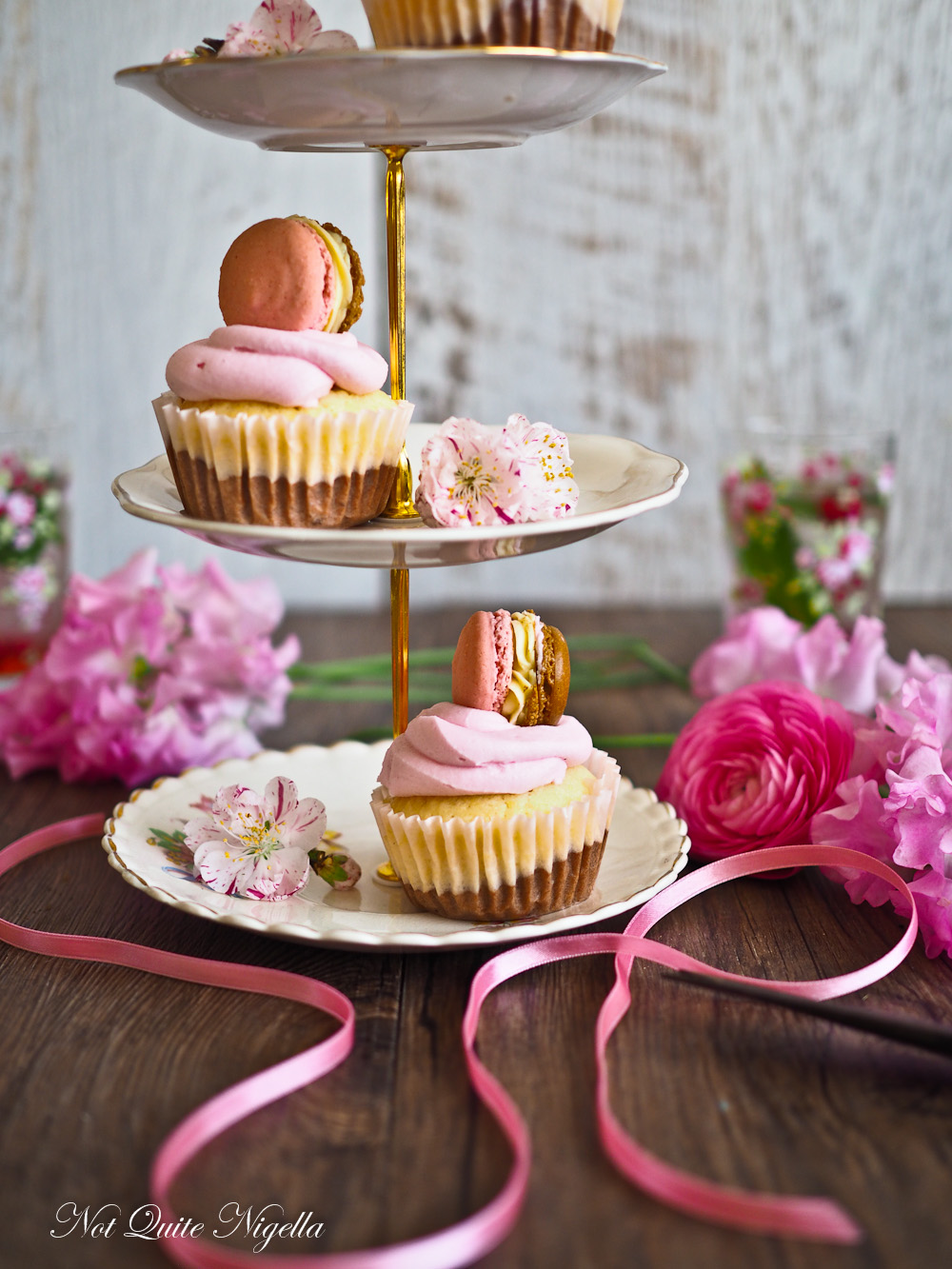 Jenny did try to accommodate Mia though. Like a scene from "My Big Fat Greek Wedding" she cooked for Mia. "Look, I made a whole fish for you!" she said proudly. She was upset when Mia replied, "Um it has a face!". So Mia is eating a lot of grilled vegetables and cheese (and only recently started to include fish). She was never one for sweets (it's an inherited thing where she, her sister Ruby and grandmother Jenny loathe sweets).

So if anything, these cupcakes are not for Mia because along with disliking sweets Mia dislikes pink. When I was a child, I was besotted by pink and in particular the colour combination from Neapolitan ice cream. I've become recently obsessed with the Neapolitan colour combination. And the finishing touch are these vintage cake stands from Valentina's Cake Stands. Aren't they gorgeous? She supplies cake stands to many of the afternoon tea places around Sydney and beyond.

So tell me Dear Reader, how often do you buy components for recipes (toppers, frosting, decorations) to save time and sanity? Non vegetarians, have you ever gone through a vegetarian period in your life? And vegetarians and vegans, what are the main motivations for you? 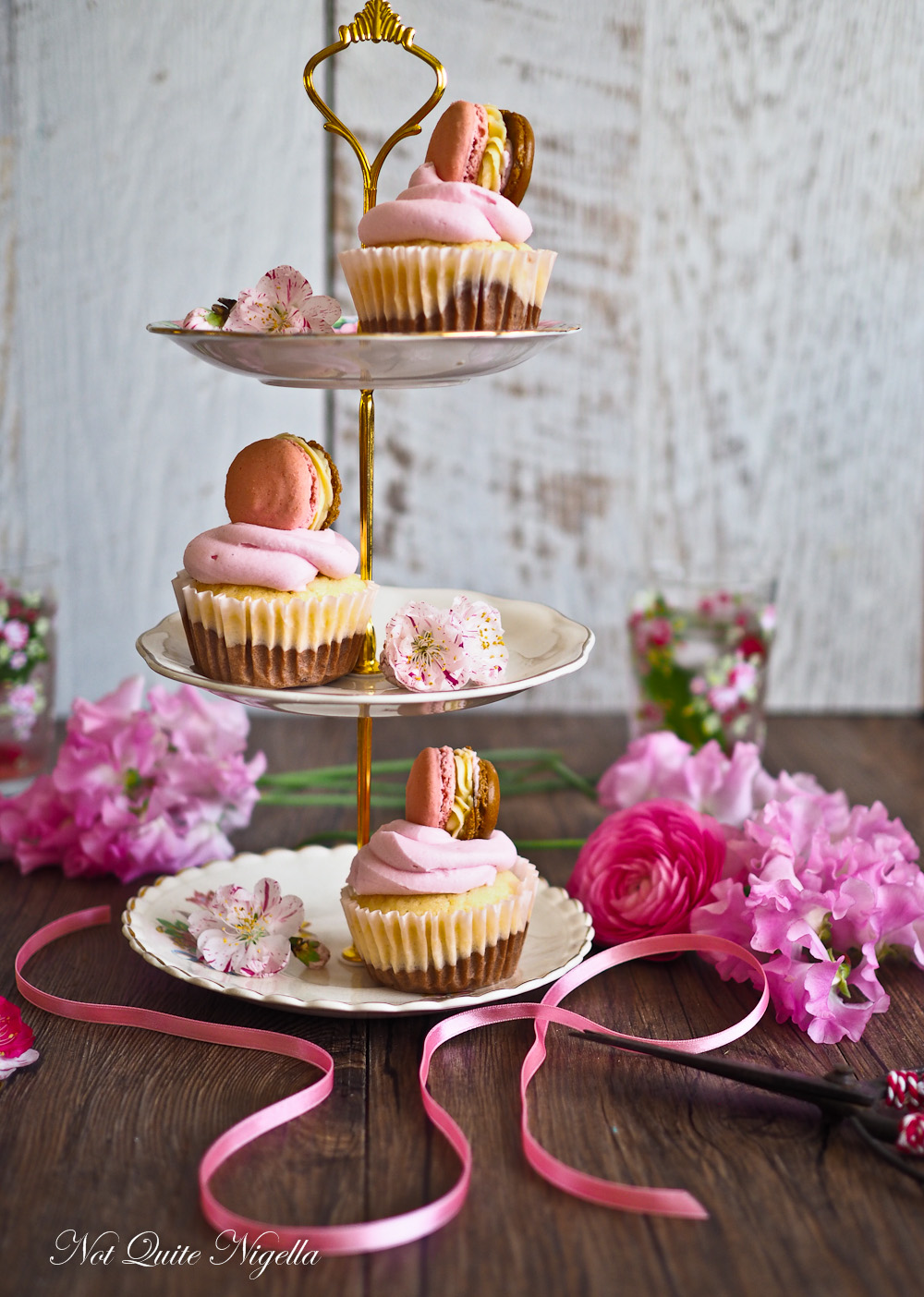 Step 1 - Preheat oven to 160C/320F and line a cupcake tray with white or very pale pastel liners. Melt cream cheese, butter and milk over a double boiler. Cool the mixture over an ice bath. Fold in the flour, the cornflour, 6 egg yolks, lemon juice and salt and mix well.

Step 2 - Whisk 6 egg whites with cream of tartar until foamy. Add in the sugar and whisk until soft peaks form. Add a couple of tablespoons of the white mixture to the main mixture to loosen it and then add the rest in two batches combining gently.

Step 3 - Divide the mixture in two and add the sifted cocoa to one and fold gently. Spoon or pipe into prepared cupcake liners. Then top with the vanilla mixture. Bake for 20 minutes or until done. Cool completely.

Step 4 - Beat the butter in a mixer with a paddle attachment. Add the milk, essence, colour and the icing sugar at a very low speed. Once the sugar is completely combined, increase the speed until fluffy. Place in a piping bag fitted with a large plain nozzle (or use a star one, whatever you fancy really). Pipe onto cold cupcakes. 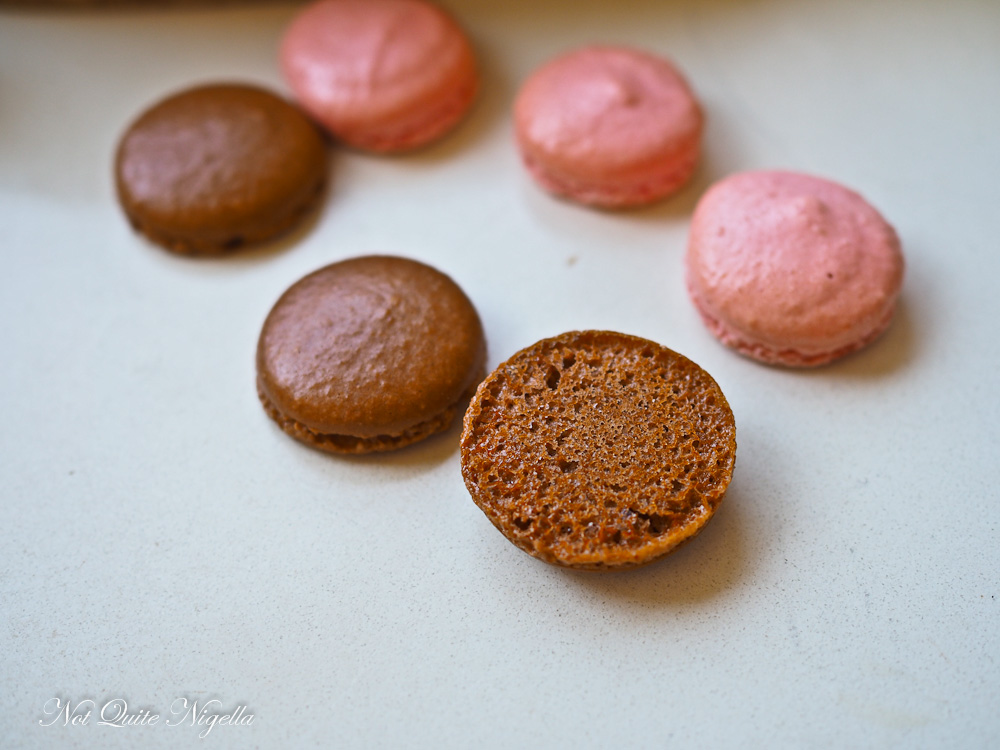 Step 5 - For macarons, match similar sized shells for pink and chocolate macarons. Fill with vanilla buttercream. To get the frill effect, use a star tip and trace around the outside and then the inside. Place on top of cupcakes. 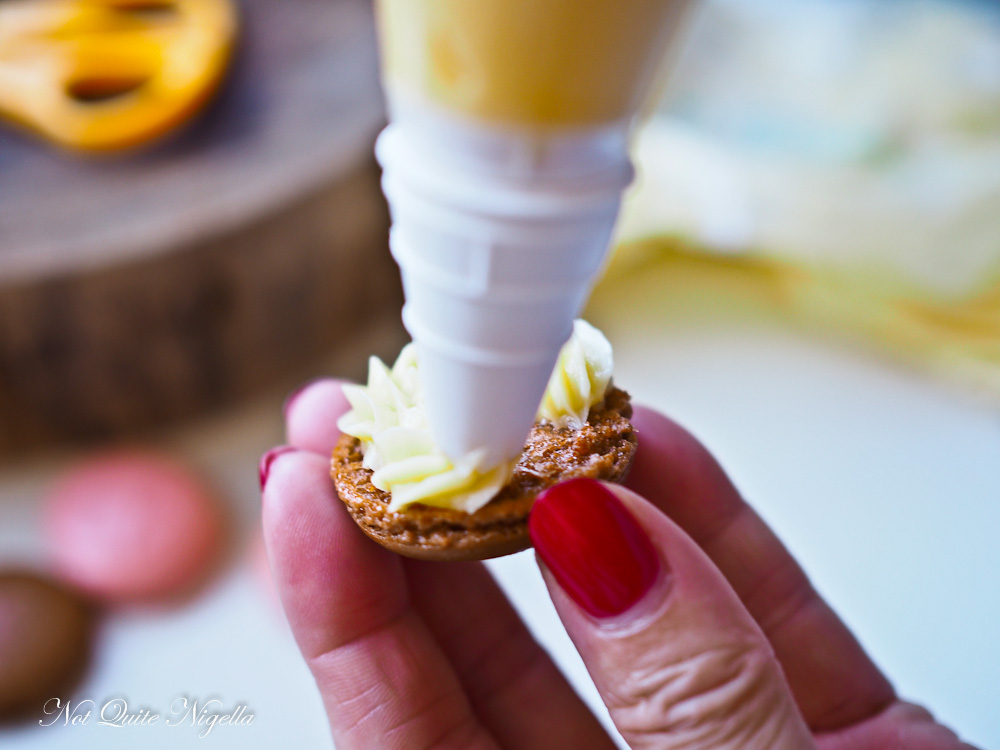 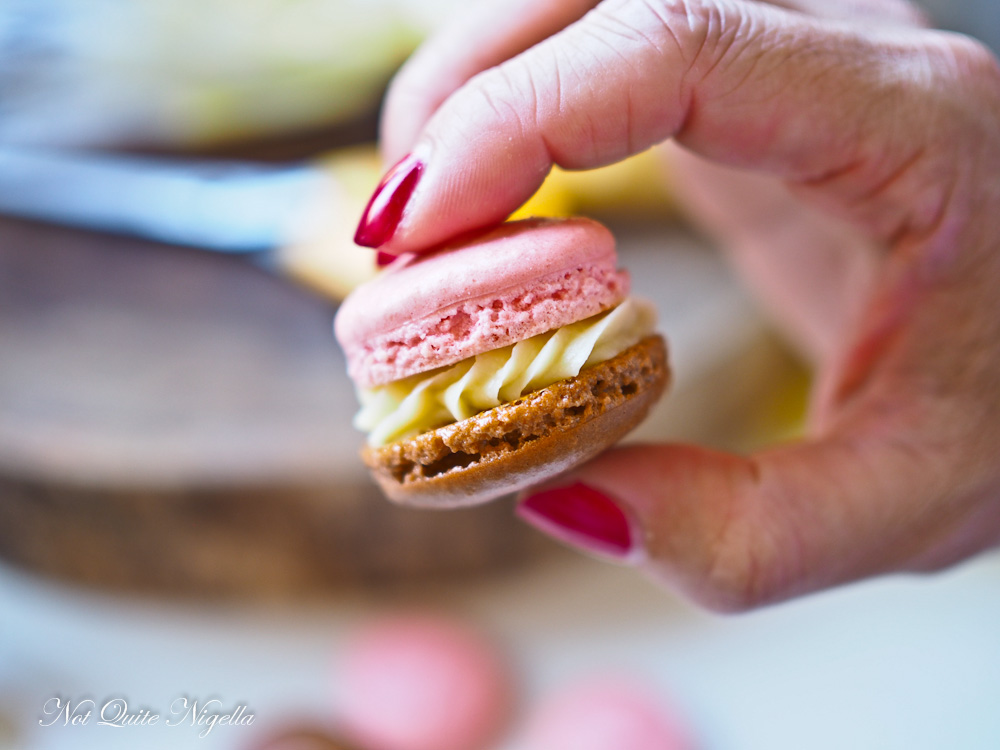