Made From Scratch: 15 Minute Chicken Stock in a Pressure Cooker 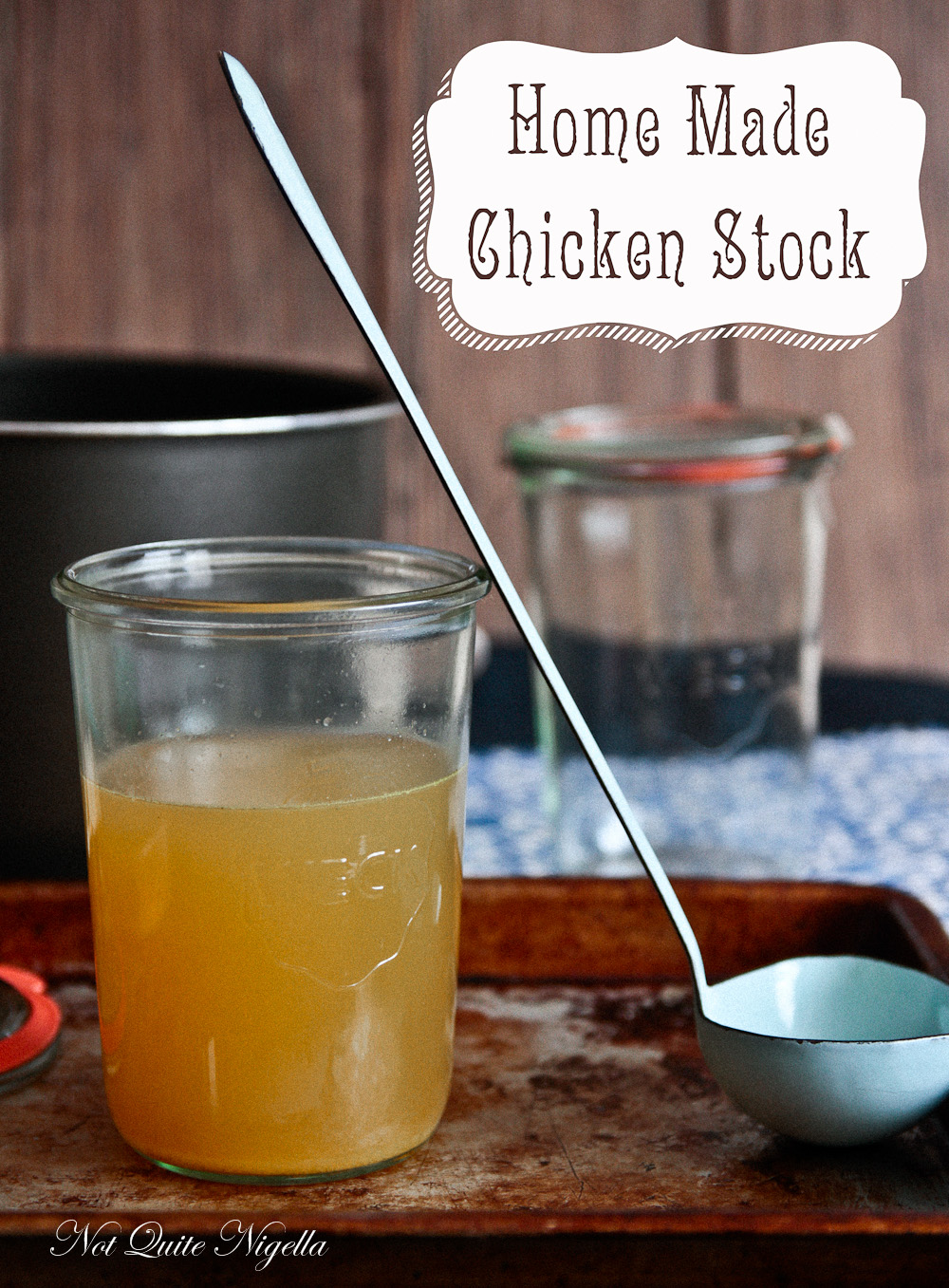 I've mentioned many times that I am a total chicken when it comes to Winter. So much so that over the next few months you'll find me on a plane trying to sun myself like a lizard in the Northern Hemisphere as much as possible. To me, the only advantage to winter is the food. Even the appeal of wearing boots and a coat has started to wear off on me.

One of the best things to have to hand for fantastic winter food is a home made stock. Stay with me Dear Reader, I'm not knitting my own socks just yet ;) I didn't make stock for ages because the idea of having something on the boil for an hour seemed entirely too long. Recently however, I've started making stock in my pressure cooker and making litres of it so that when I come home from overseas or a trip interstate I know that I have a great base for a soup, stew, slow braise or risotto ready or even chicken soup if you're ailing. I actually started making it because I saw that a local chicken shop has three chicken carcasses for $1 (Chicken George at Royal Randwick if you're in the Eastern Suburbs). No they're not free range but it's better than having them go to waste I figure! 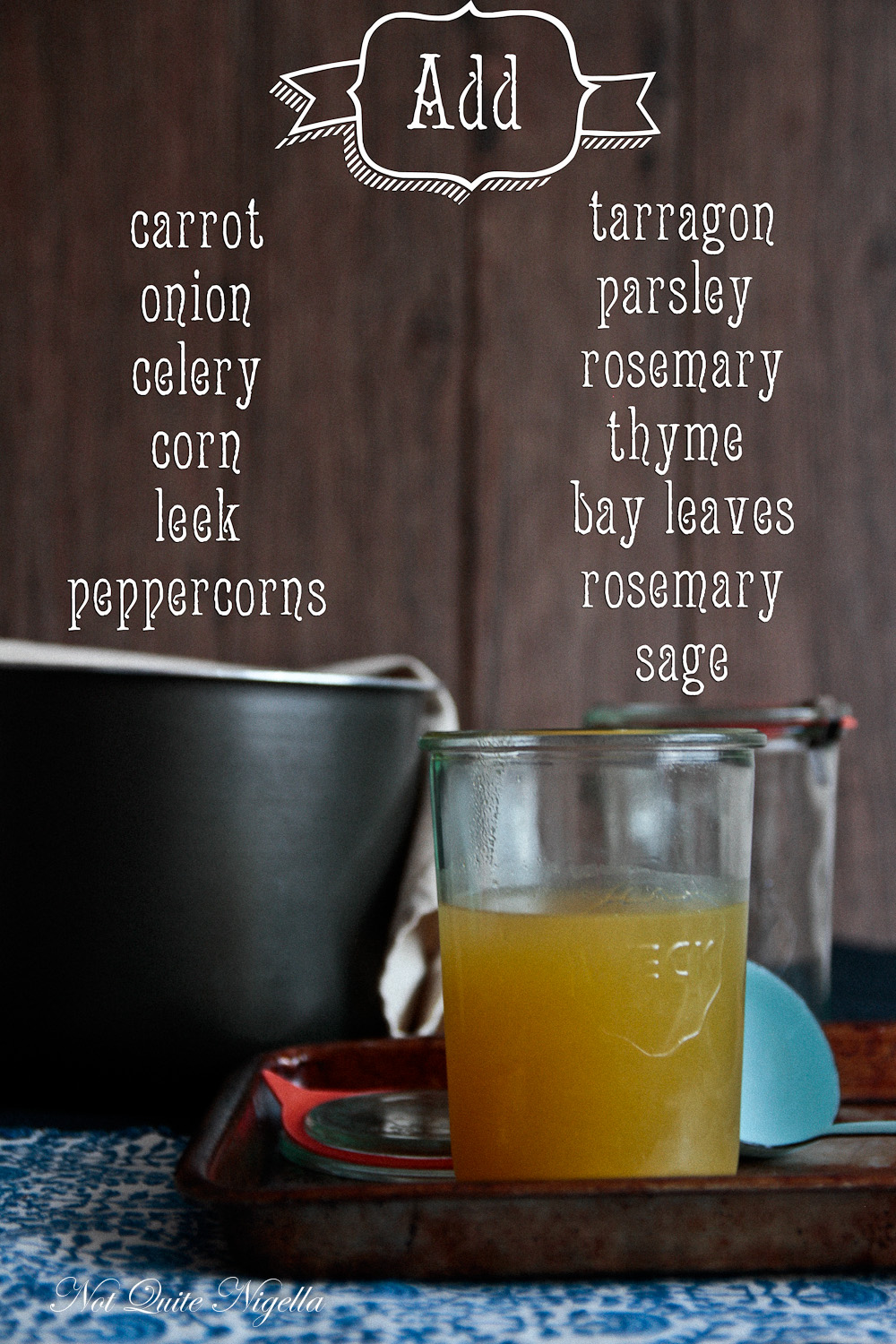 I didn't think to even share this recipe and method with you because I assumed that everyone makes stock in a pressure cooker (yes that saying about "assume" making an "ass out of u and me" comes to mind) but quite a few of you asked me about how to make it on the blog and on my Not Quite Nigella facebook page.

This is a pared down chicken stock but wonderful in its simplicity. You can of course add salt and lots of vegetables and if you're going to have this as a clear chicken soup you would want to but as an ingredient to be layered upon, just the odd trimmings are fine. For this batch, I used corn cobs trimmed of their kernels because I was going to make a chicken and corn soup. The most common vegetables are carrot tops, onion tops, celery tops, herb stalks etc - just wash them of any dirt or debris first and be judicious with your herbs. Ones like mint are strong and can overpower a stock depending on how much you add. I've added a list of suggestions above. And within 15 minutes you'll have your own golden chicken stock!

So tell me Dear Reader, do you cook with a pressure cooker or slow cooker? And what other stocks would you like to know how to make?

Made From Scratch: 15 Minute Chicken Stock in a Pressure Cooker

Step 1 - Place the chicken carcasses in the pressure cooker (making sure that they don't exceed the maximum level - if they do, flatten them down). Cover with water (cold or hot, hot is quicker) and then add in whatever vegetable trimmings you have. 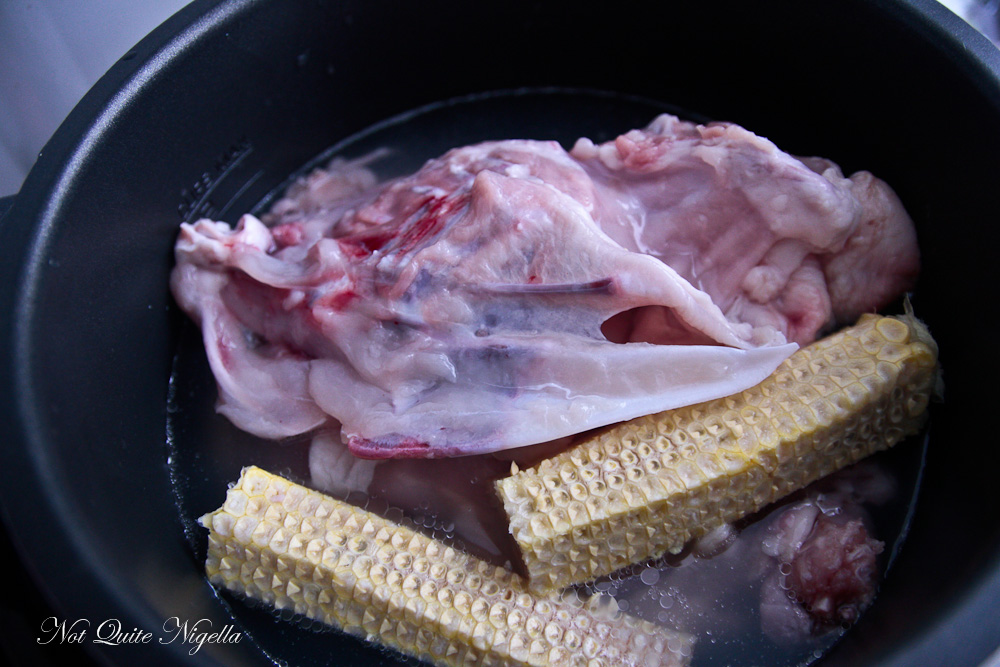 Step 2 - Put the pressure cooker on medium pressure and cook for 15 minutes. Release the steam and remove the carcasses from the water-the meat still on the bones makes fantastic chicken sandwiches and I get about a whole takeaway container's worth from the three carcasses (although it is time consuming taking the meat off the bones).

Step 3 - Cool and then refrigerate or freeze (freeze in plastic containers rather than glass). I find it easier to skim the fat off the top once it is cold. Having a layer of fat also protects the stock while cooling. You can leave the fat on particularly if you are keeping the stock in the fridge for a few days as this prevents air from getting to the stock and it spoiling.