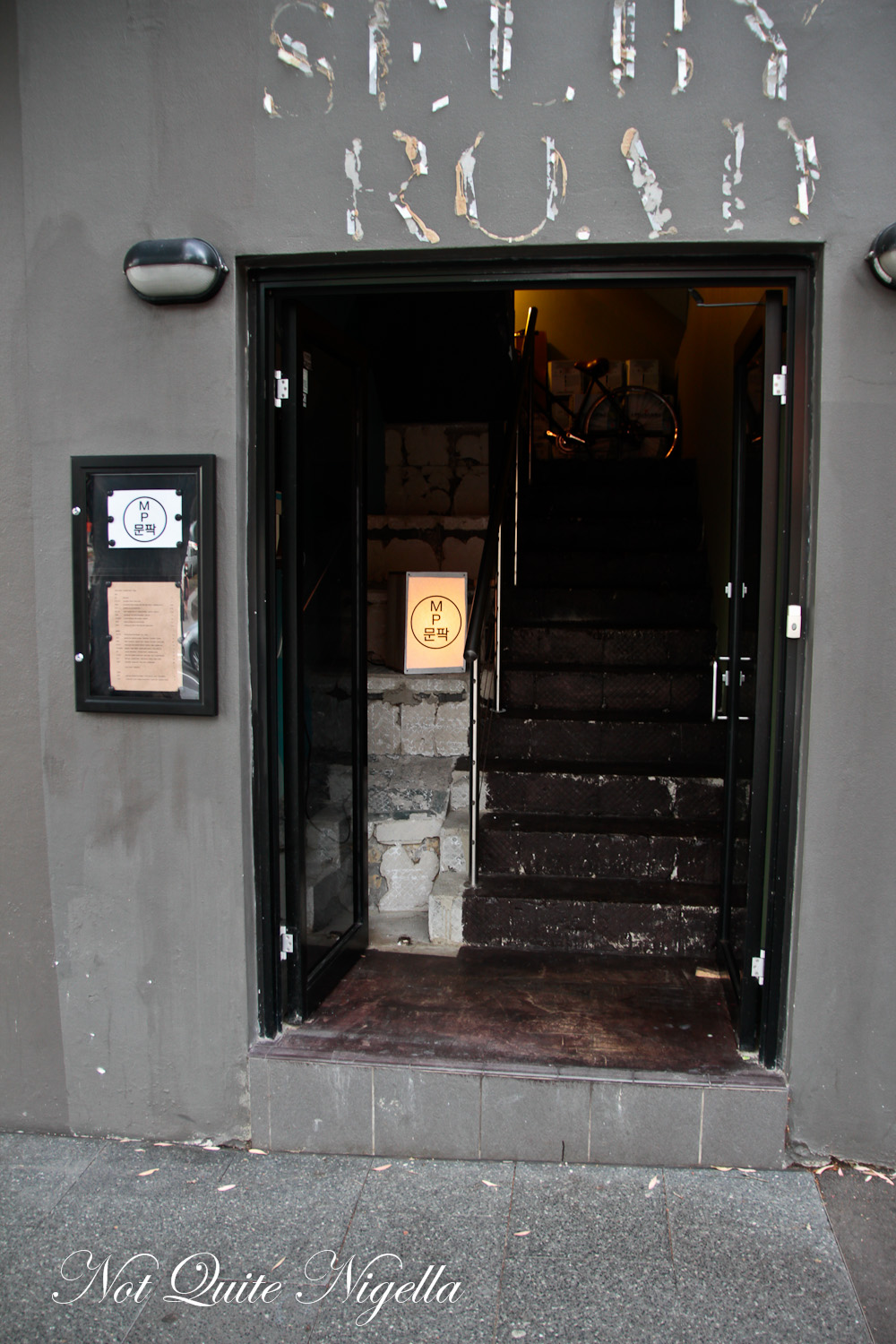 Me: "I think it's because they looked out to the park outside at a time when the moon light struck it just so." ENFJ on the Myers Briggs Test (for any psychology students out there ;)).

Nick: "I bet it's the name of someone. There are loads of Korean people called Park and Moon." ESTJ on the Myers Briggs Test.

Mr NQN: "I dunno. It's the name they chose." INTP on the Myers Briggs Test. 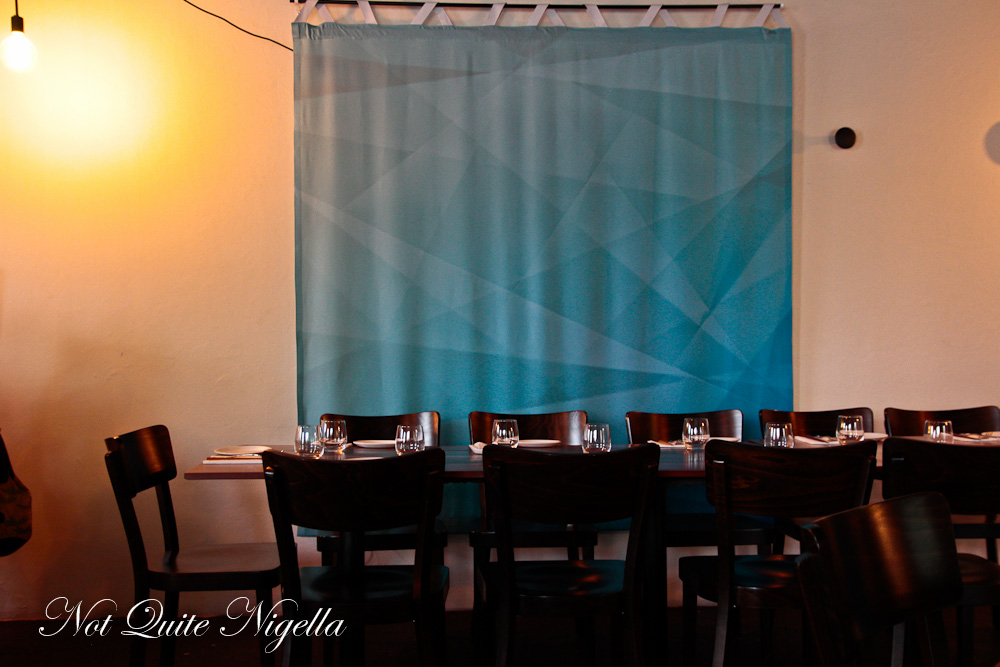 It would turn out that I would be entirely wrong and the reason that Moon Park was given its name was a combination of Nick and Mr NQN's. How pragmatic!

It is a Saturday evening when Mr NQN and I are meeting Nick, Louise and Viggo at Moon Park. Located more on Elizabeth Street than Redfern Street, we drove around looking for it, calling them and wondering whether they had decided to set up a restaurant among housing commission until we finally found it. Located up one level above a furniture store, Moon Park serves modern Korean cuisine. 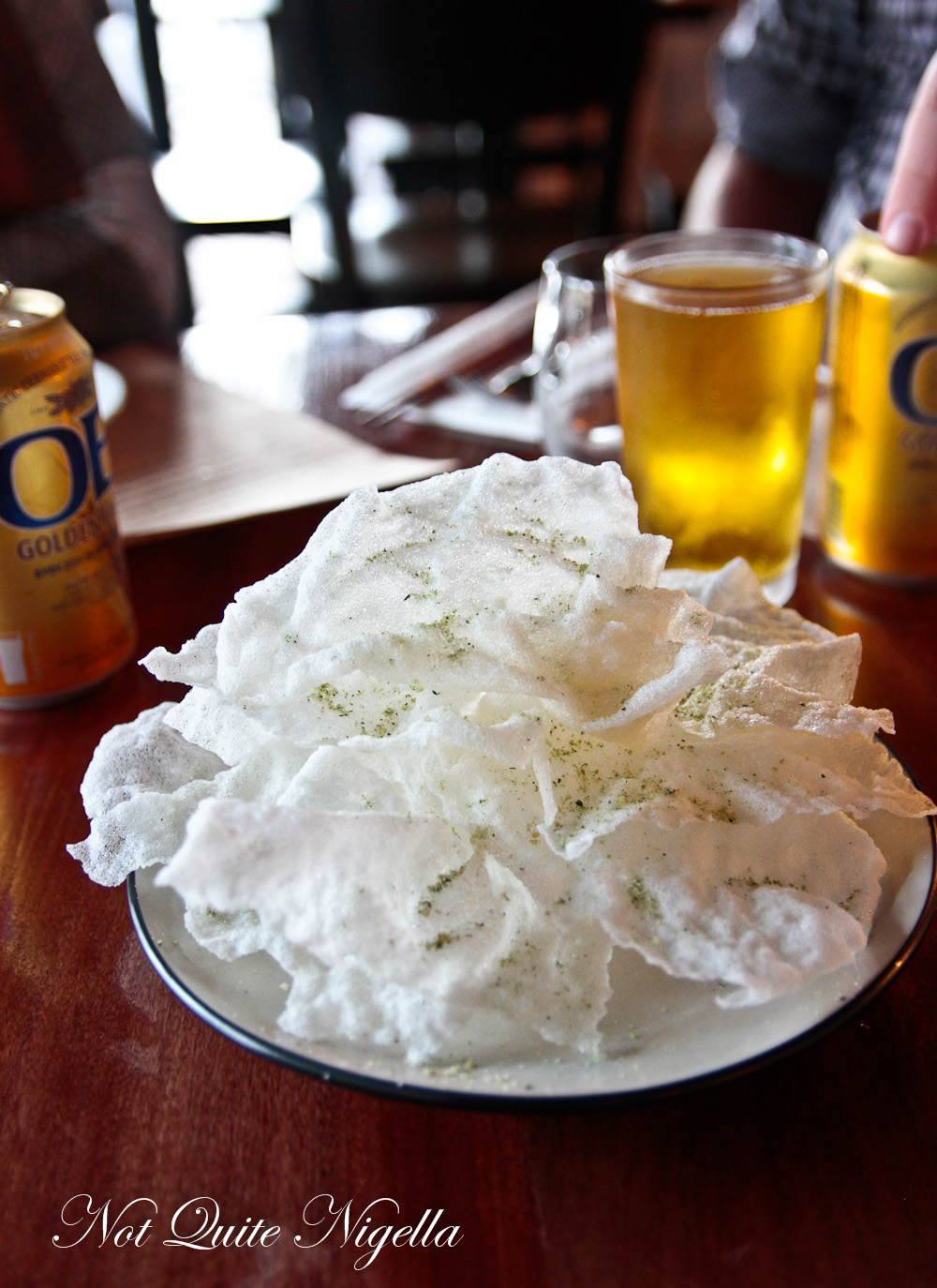 Formerly a "dodgy pub" (according to the waitress), it is now an airy space with a large rectangular room with three doors that open out to a balcony that holds more tables. Service is very good and we sit and nibble some delicious deep fried rice crackers seasoned with thyme and seaweed salt while contemplating what to order. Our food comes out at a good pace which is fortunate because we have a time limit at the table. 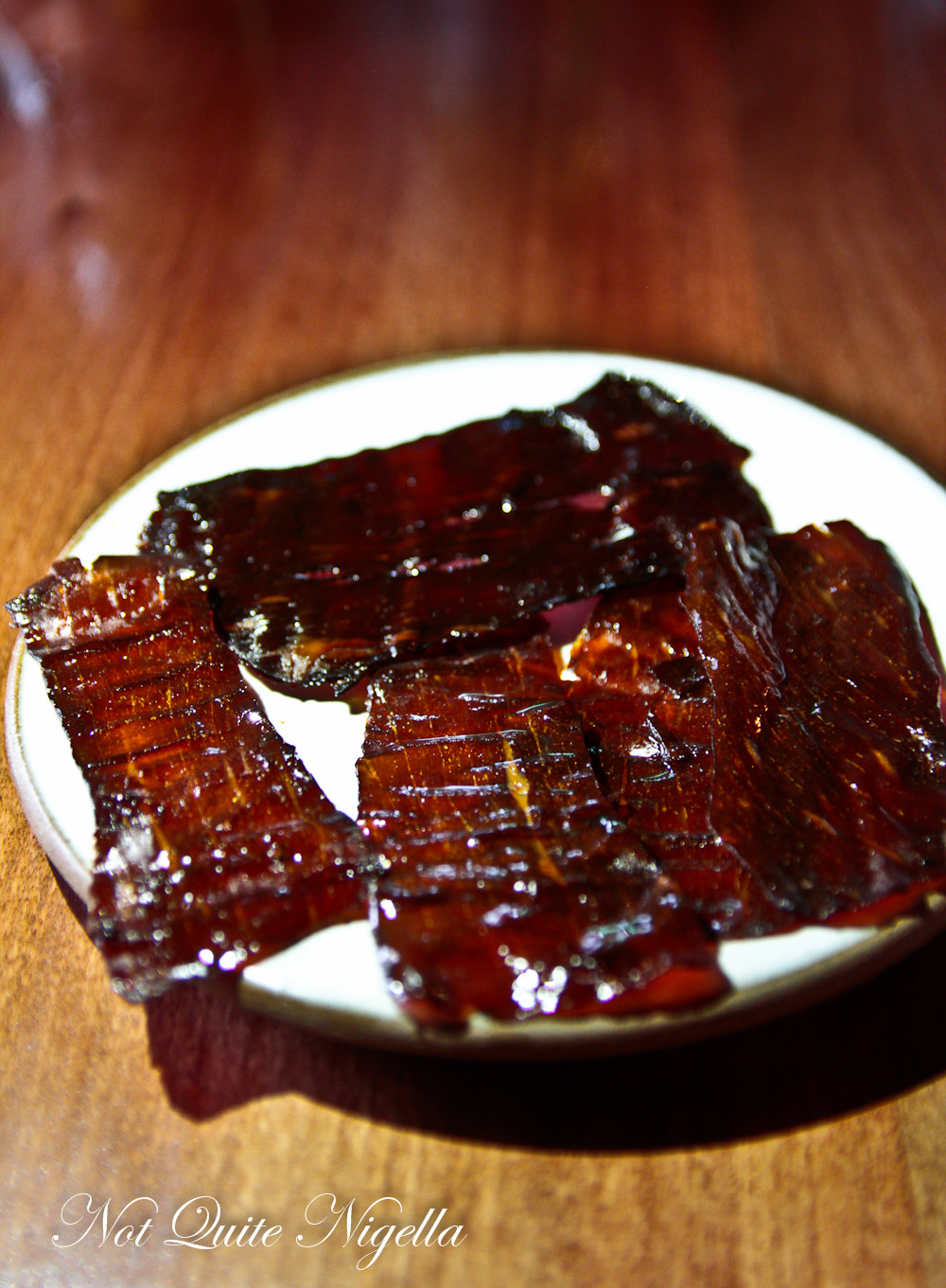 The beef jerky comes as five paper thin strips of crispy pieces of lacquered beef with a smoky sesame oil aroma to them. They're almost like thin beef candy. 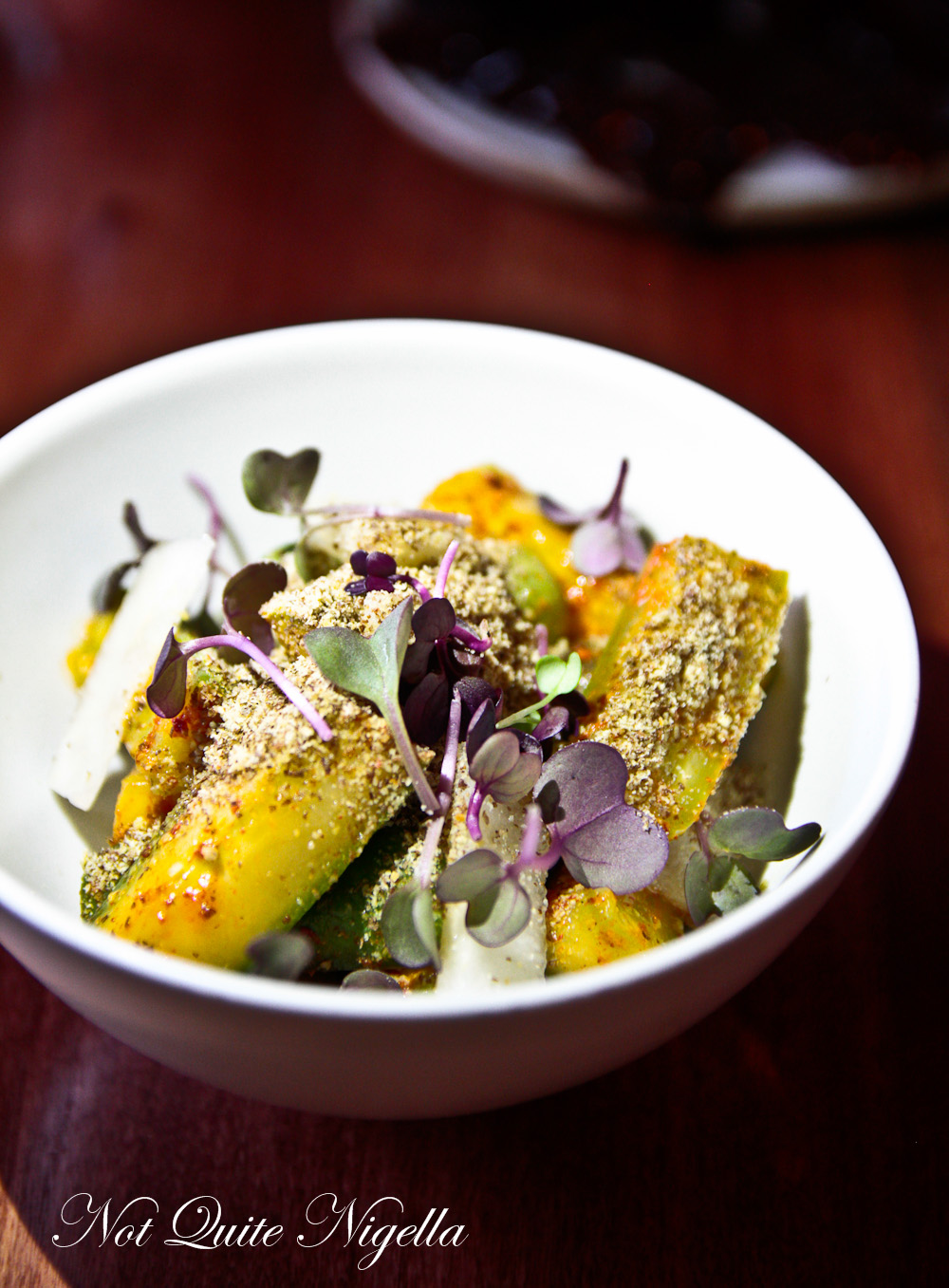 We all love the batons of cucumber kimchi with microherbs and slices of fresh nashi pear. The cucumber packs a punch with the chilli but has the natural cooling properties offsetting the heat. 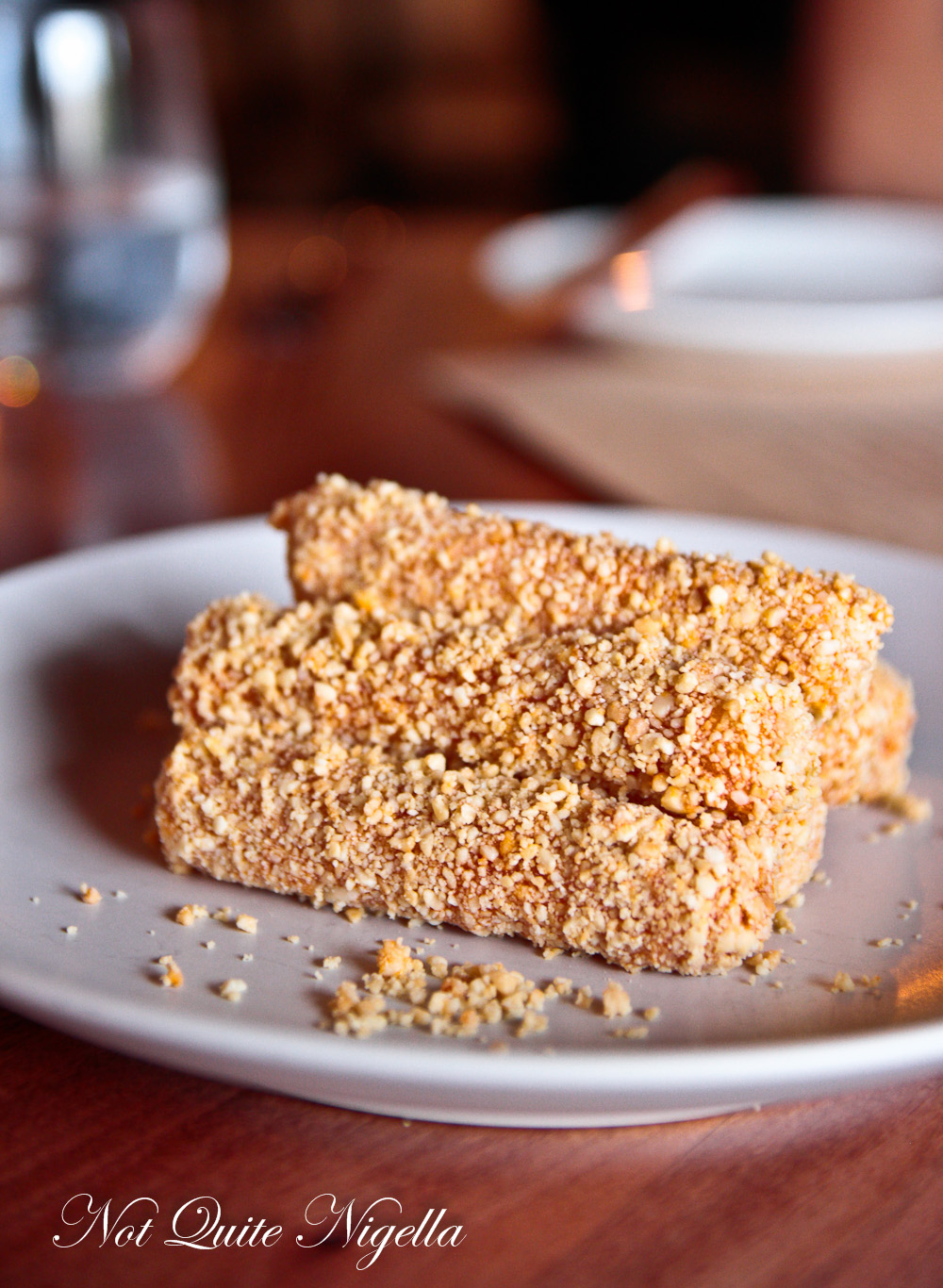 I think that you either love the chewy glutinous texture of glutinous rice flour based products or not. I'm firmly in the "love" camp and these cylinders of chewy rice cake are coated in ground peanuts and hot chilli pepper sauce. 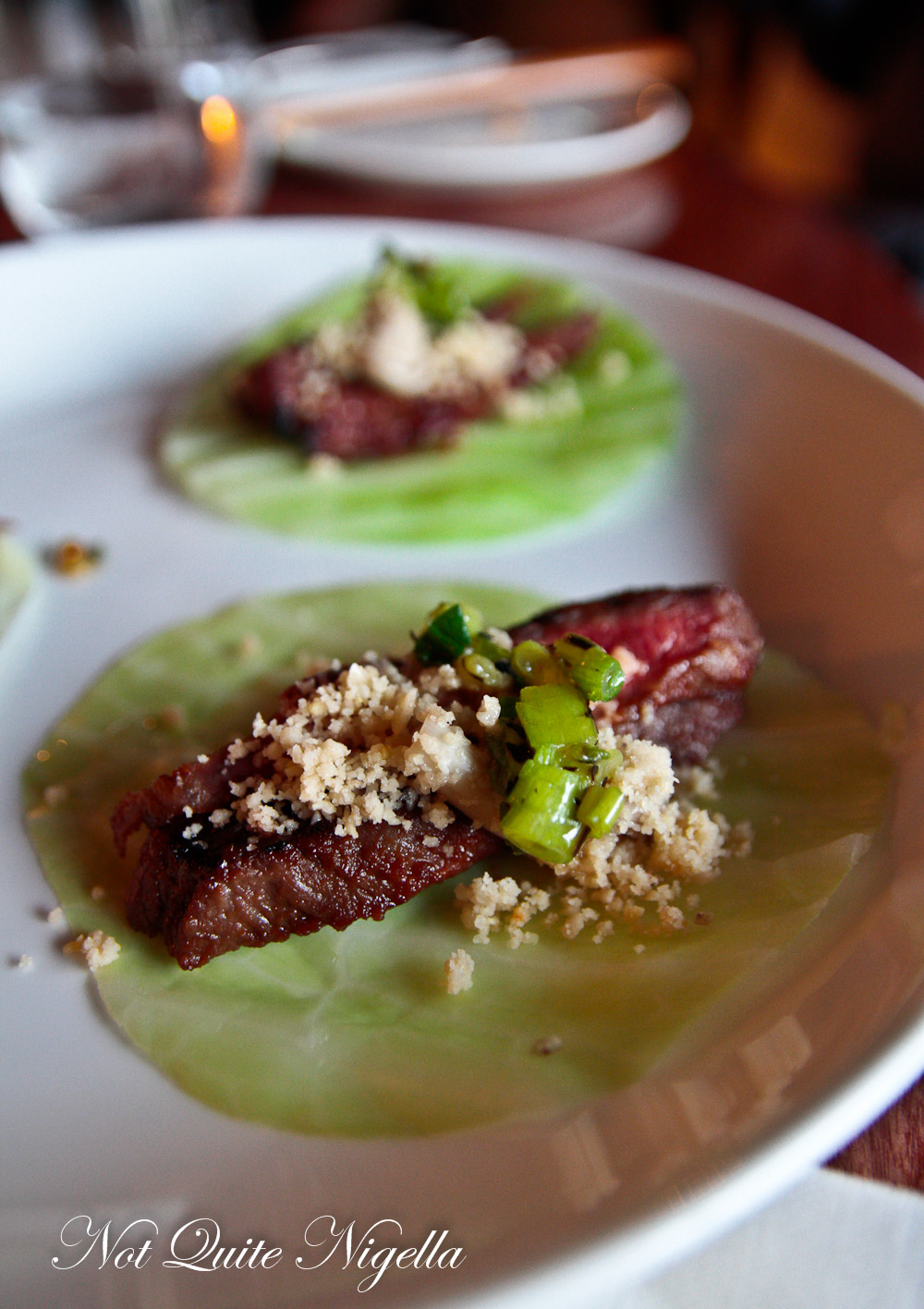 The ssams are served on blanched rounds of cabbage and are topped with bulgogi short rib, sweet cabbage, pine nuts and anchovy. Anchovies are used in a lot of Korean dishes to add saltiness and whilst this is good, I prefer it when short rib is softer in texture. These pieces give some resistance when you bite into them. 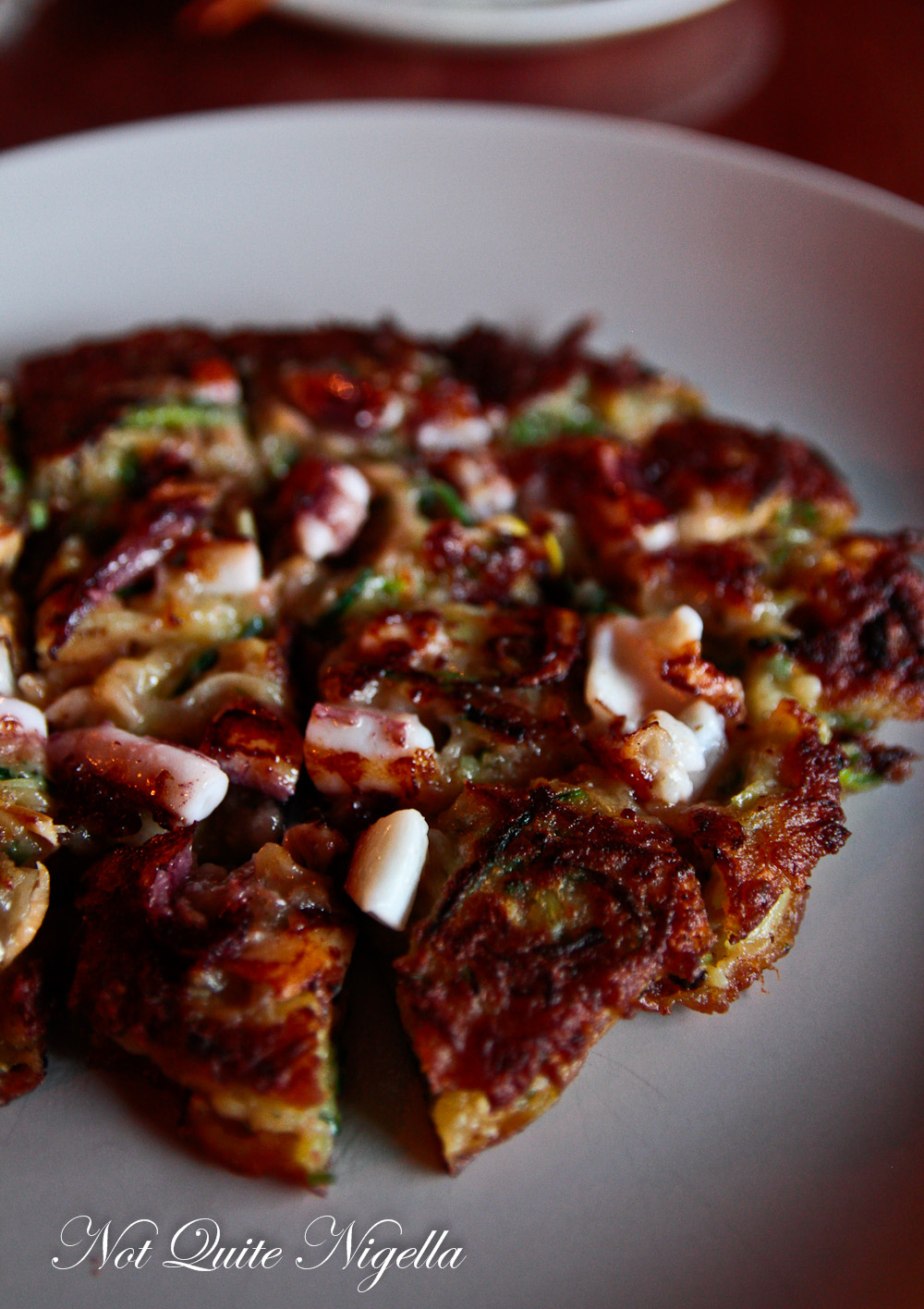 Zucchini pancake with mussels and calamari $12

There are two pancakes on the menu and we were steered towards the zucchini pancake as it has appeared on the menu since the beginning. It's a crispy fried pancake cut into small pieces. It's filled with mussels and calamari although the pieces that I had didn't have any mussel, only calamari. The centre is also a little doughy and could use a minute or two more cooking. 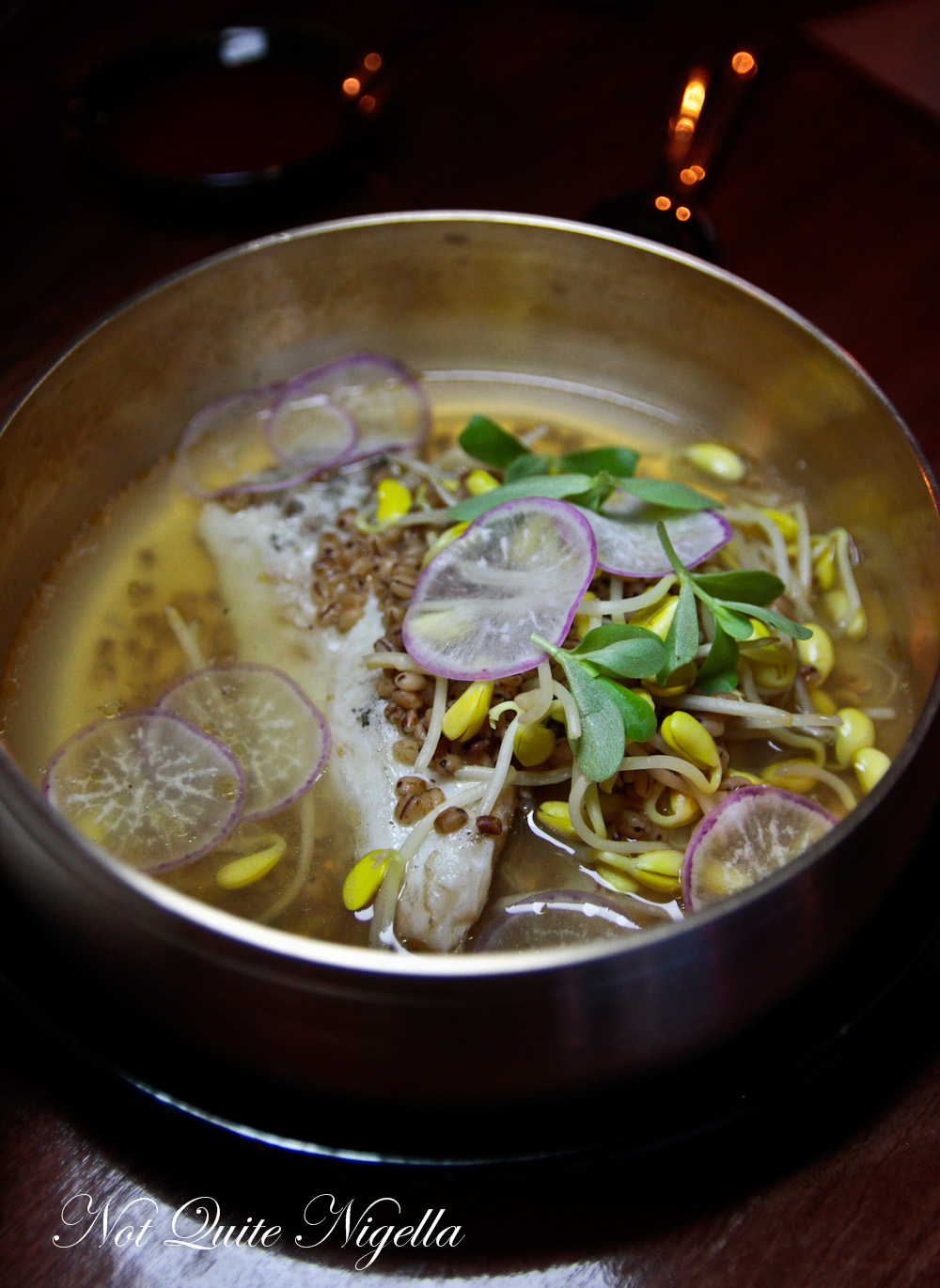 Our mains come out all at once and the John Dory is a favourite with Mr NQN. Subtle, so you want to eat it first if you're having other mains, the John Dory is beautifully cooked and is served in a pollock broth with a salad of Korean bean sprouts, chewy barley and radish. This feels nourishing and healthy. 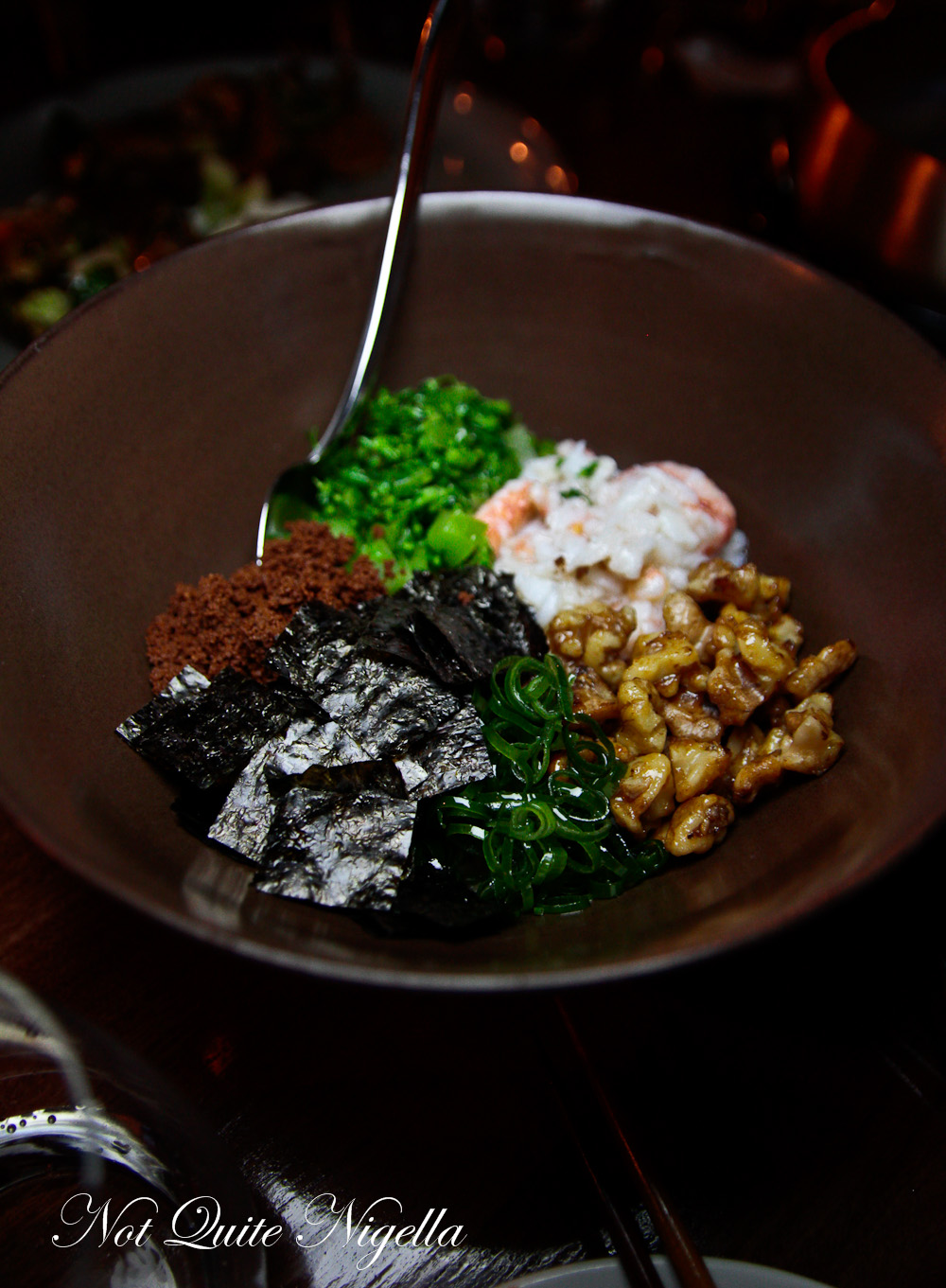 Th bibim is an upmarket version of the classic bibimbap. This one offers mixed rice, spanner crab, candied walnuts, broccolini and burnt butter. It comes with some chilli sauce which we stir around and the result is a multi textured dish with a good range of flavours and tastes to it. 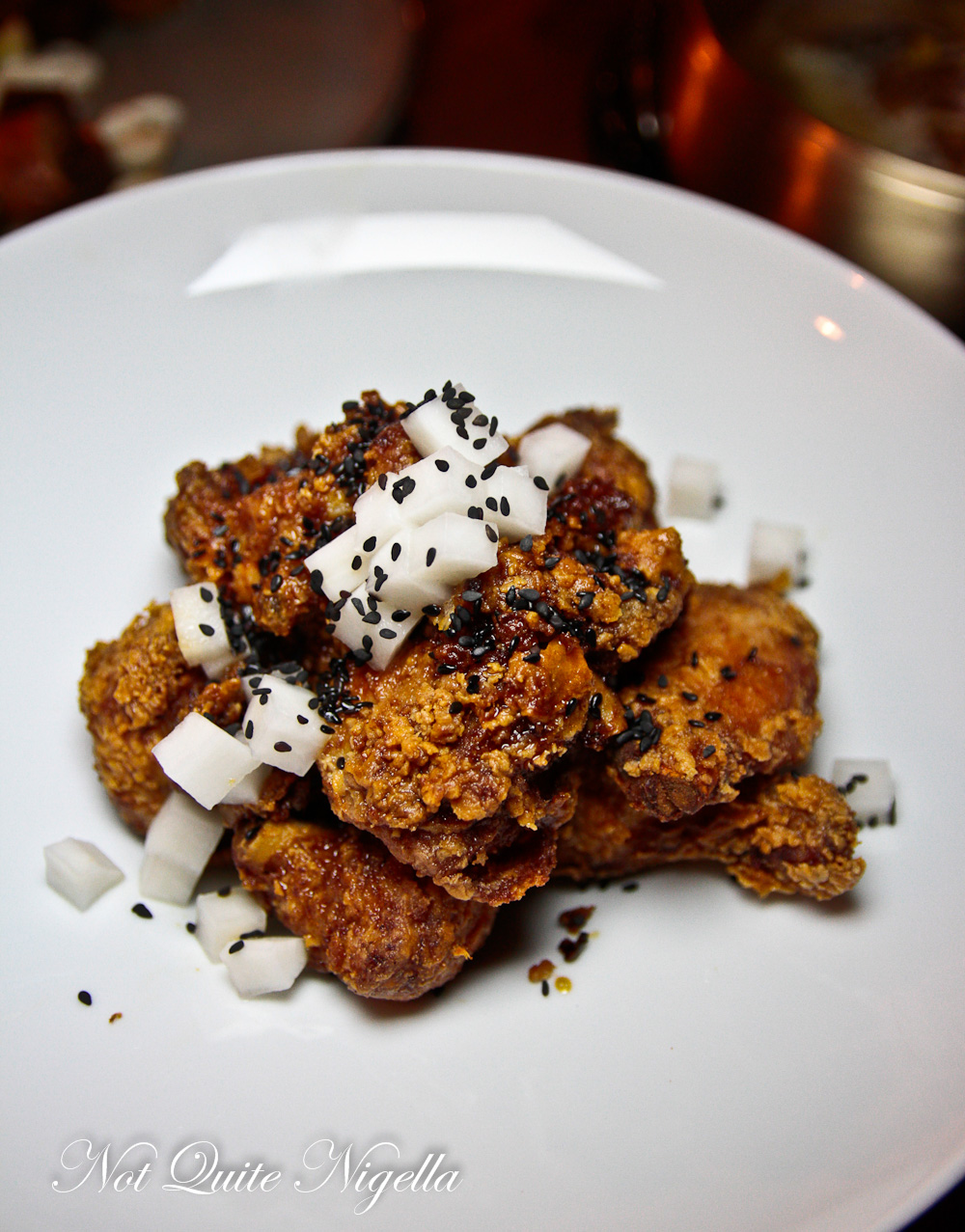 Fried chicken is a winner for all of us and these shrimp brined chicken pieces with soy and a sugar syrup are salty but sweet at the same time. The crunch on these wings is excellent and it's worth raising a piping hot piece to your mouth and risking a scalded tongue to get these while they are hot. 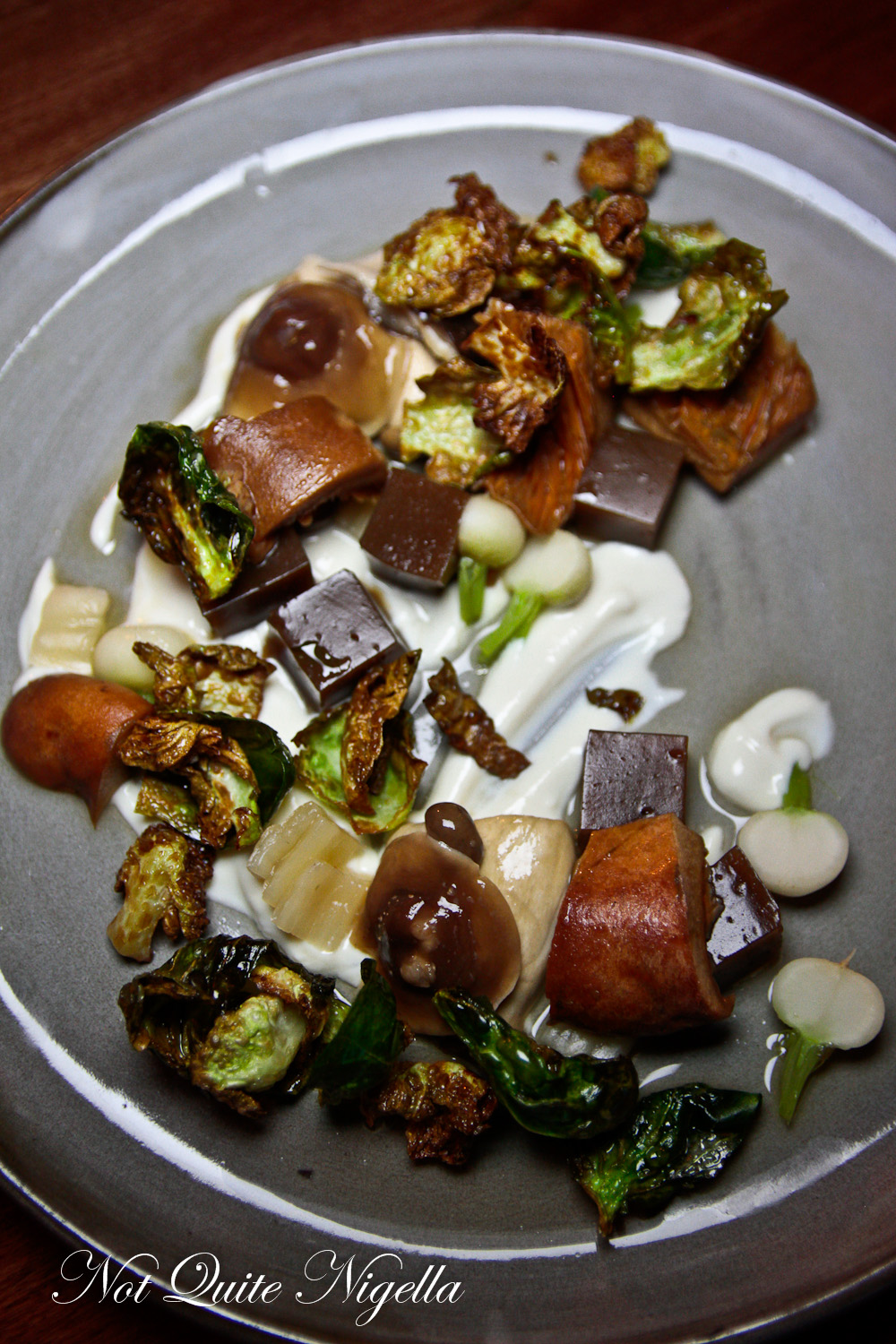 More ordered for curiousity's sake, alas none of us really went for this dish of pickled mushrooms with acorn jelly and brussel sprouts. Although beautifully presented, the mushrooms needed a bit more oomph to them and the acorn jelly is generally quite mild in flavour so it was left to the brussels sprouts to help it along with flavour. 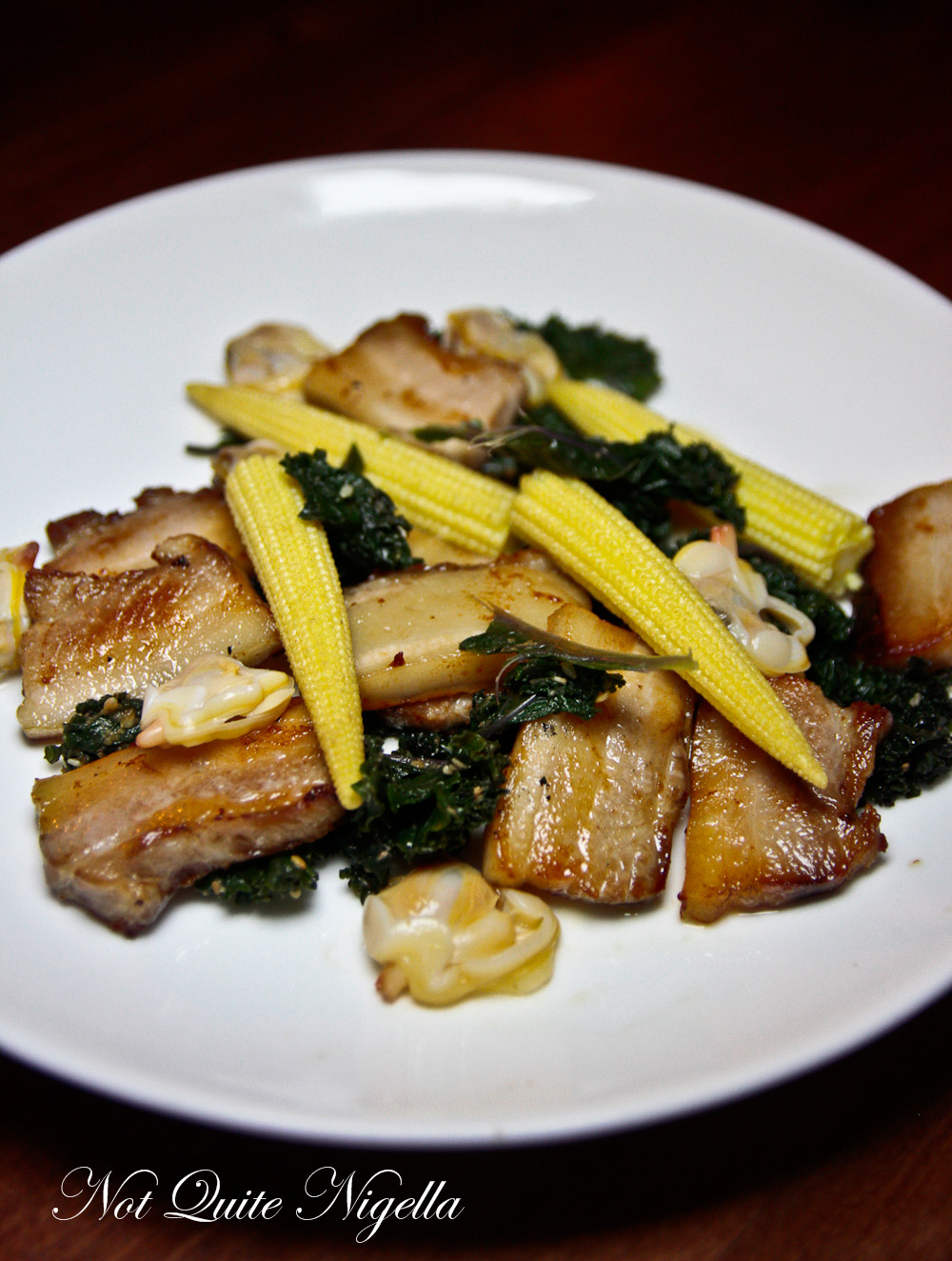 Louise looks at the boys and wonders if they can do with another dish. They can indeed and the pork belly, always a favourite with Danish Viggo is ordered. It comes out sliced and a tad chewy in texture. There's also young corn, kale namul (where the kale is blanched and then mixed with sesame oil, soy, garlic and seasoning) and pickled clams. All together the dish needs some moisture and the pork belly doesn't have that melting texture that one craves when ordering the dish. 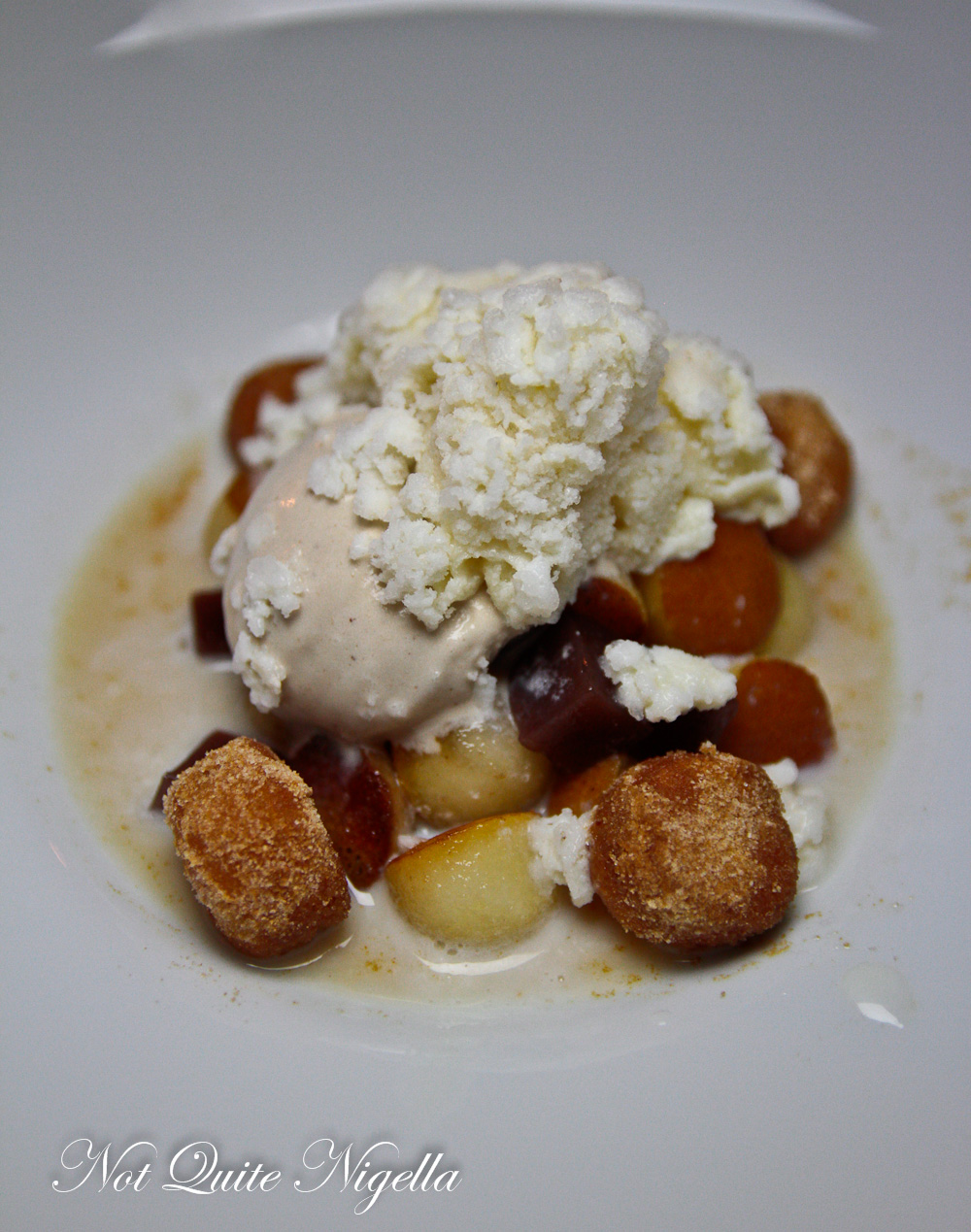 There are only two desserts on the menu so we had to order both for research purposes of course right? ;) The patbingsu is usually a shaved ice dessert. Here in Moon Park's hands it is a sophisticated turn with a heavenly, incredibly smooth chestnut ice cream, balls of pear, tiny cinnamon sugar rolled donuts, red bean jelly cubes and sujunggwha, a Korean cinnamon punch. All of it is topped with shaved brown rice ice. It's not overly sweet and it is delicate in flavour and refreshing. 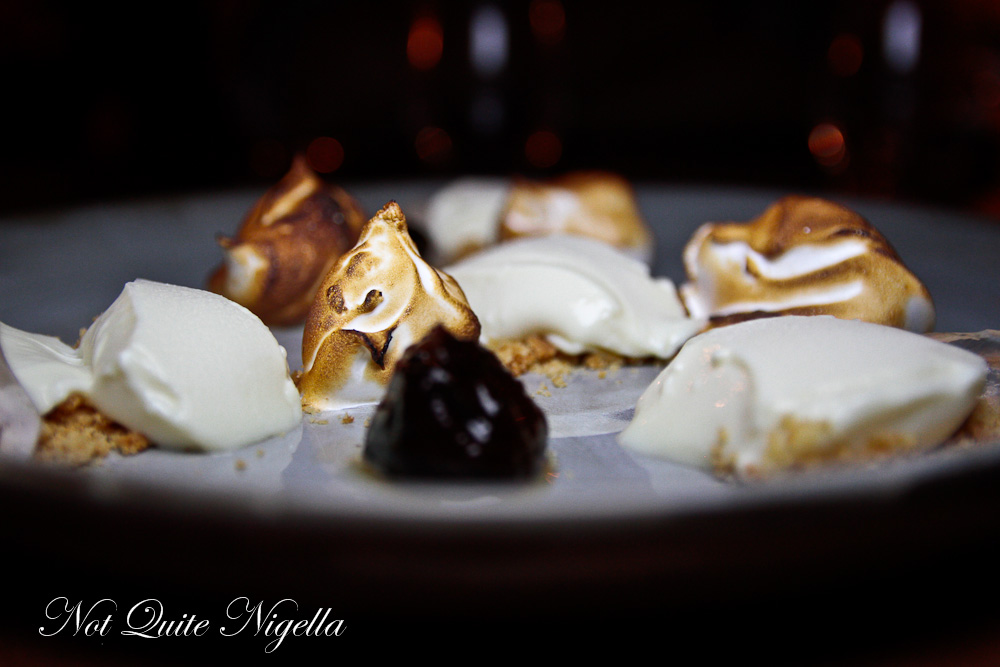 The Moon Pie is their version of an American Moon Pie made with biscuit and marshmallow. Here it is deconstructed with prunes soaked in plum juice, ginger jelly, white chocolate mousse, graham cracker crumbs and plum or maesil marshmallow. I had no idea that prunes went so well with marshmallow but it is a sublime dessert made up of soft, billowing whites, torched meringue and sweet prunes. 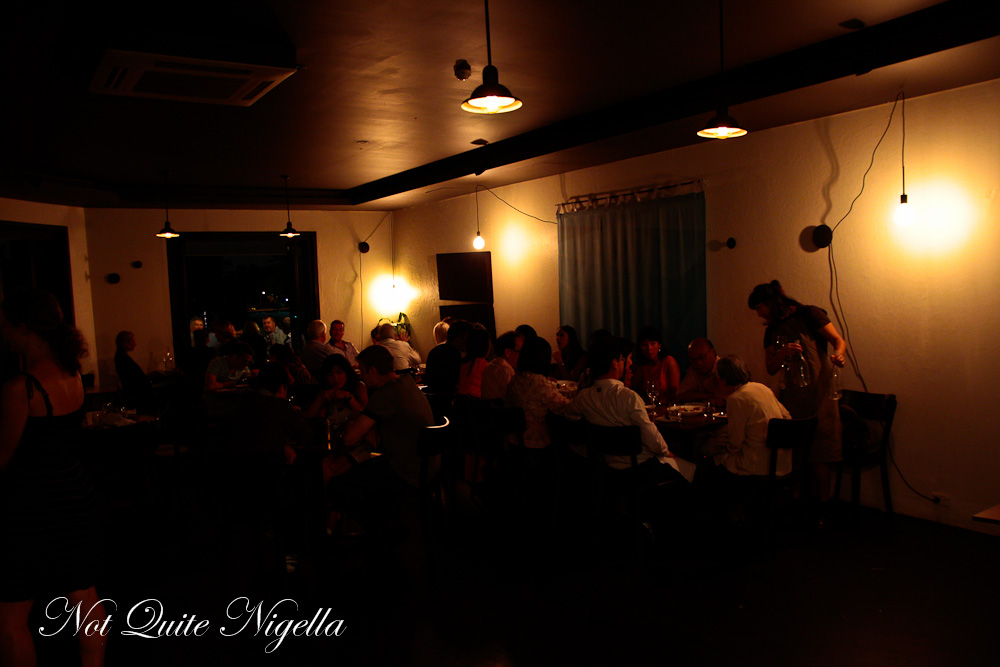 We're very pleasnatly surprised when the bill arrives. For the amount of food that we had the bill amounts to just $40 a person not including the Korean beers. And by 8:30pm we're done and dusted with dinner with the only challenge, what next to do on a Saturday night!

So tell me Dear Reader, do you prefer early or late seatings if there is a time limit? And if you go early, do you go somewhere afterwards or do you retire early?