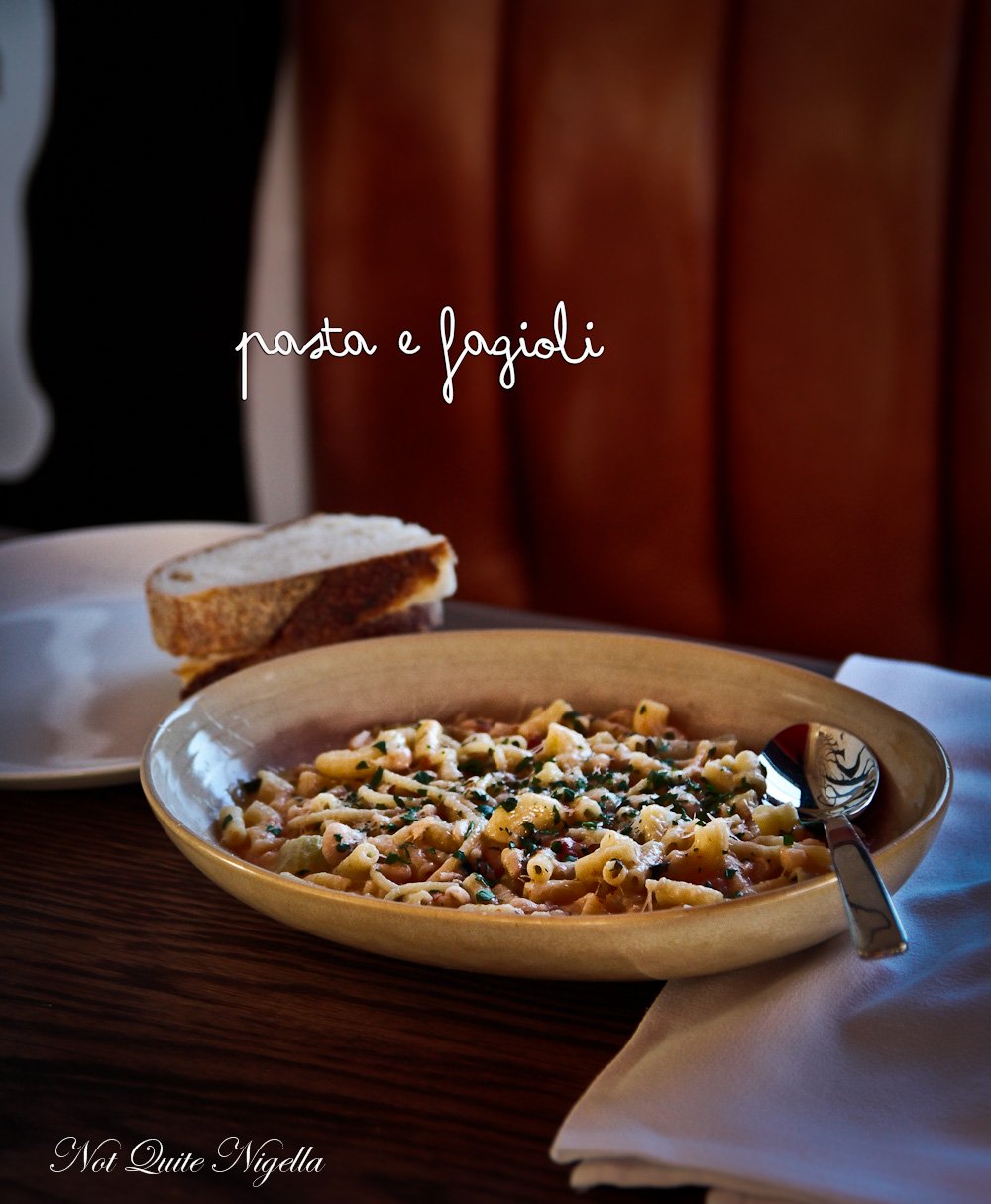 Picture this: it's cold outside - I'm sure fellow Aussies will have no trouble imagining this. You see the golden light in your house through the window and you can immediately imagine the warmth from the heater. You rush towards it fumbling with your keys in your haste to open the door. Your fingers are clumsy and knotted. When you open the door you are greeted with the sight of a pot simmering away on the stovetop and the aroma of a hearty Italian stew cooking away. You are handed a bowl of the soup and you wrap your fingers around the bowl. Feeling returns to your fingers. You take a spoonful of the bean and pasta soup topped with melted shreds of reggiano cheese. A flushed feeling spreads to your chest and warmth floods your heart. 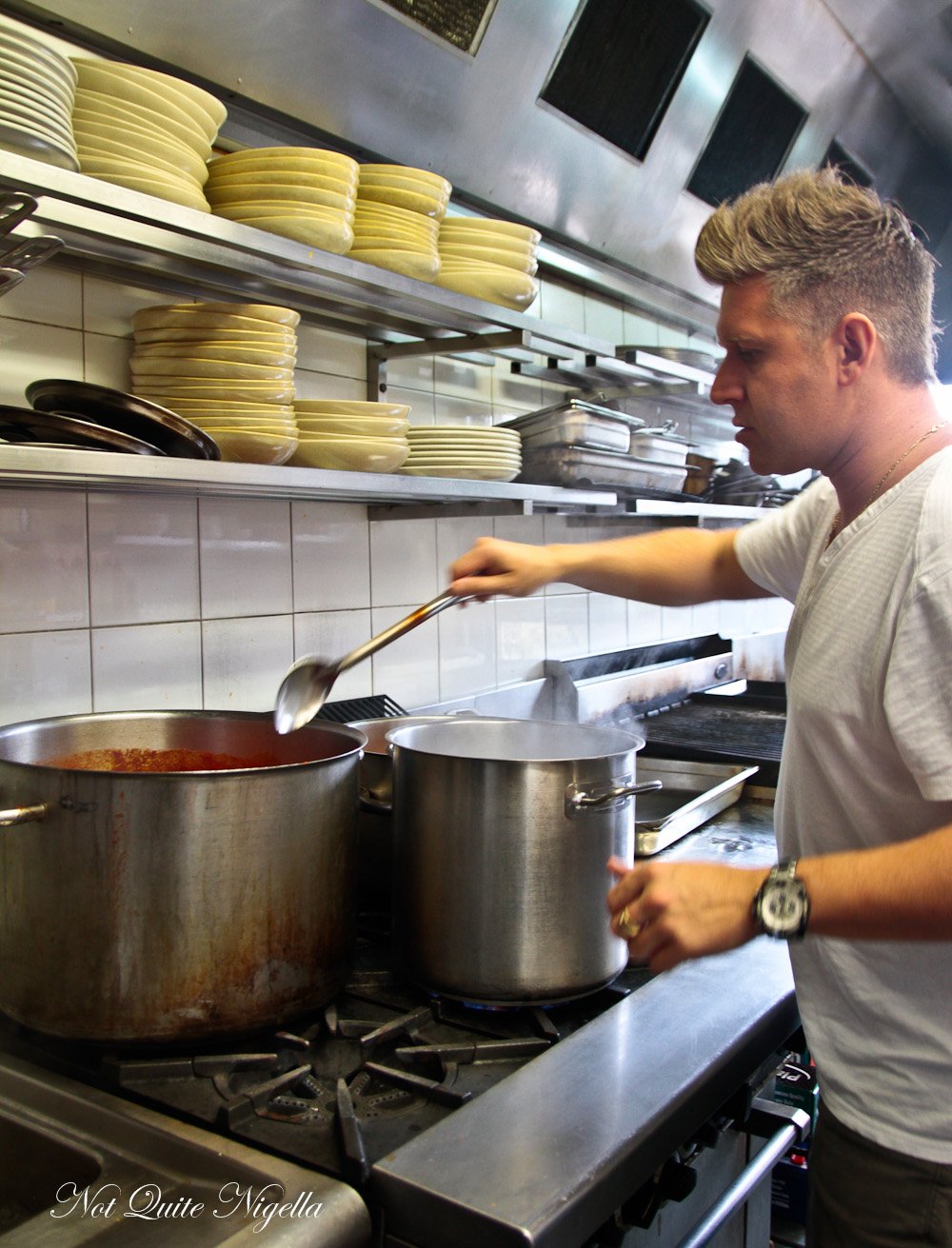 I'm being shown how to make a classic Pasta e Fagioli by chef Massimo Mele of La Scala restaurant. A peasant dish made of scraps it is the perfect way to stave off any sort of Winter blues. Massimo was born in Naples in the South of Italy and moved to Tasmania where he grew up. In the south of Italy they have peasant style dishes or Cucina Povera aka cooking of the poor. It's rustic, humble, hearty and resourceful fare and Pasta e Fagioli is a perfect example of this. 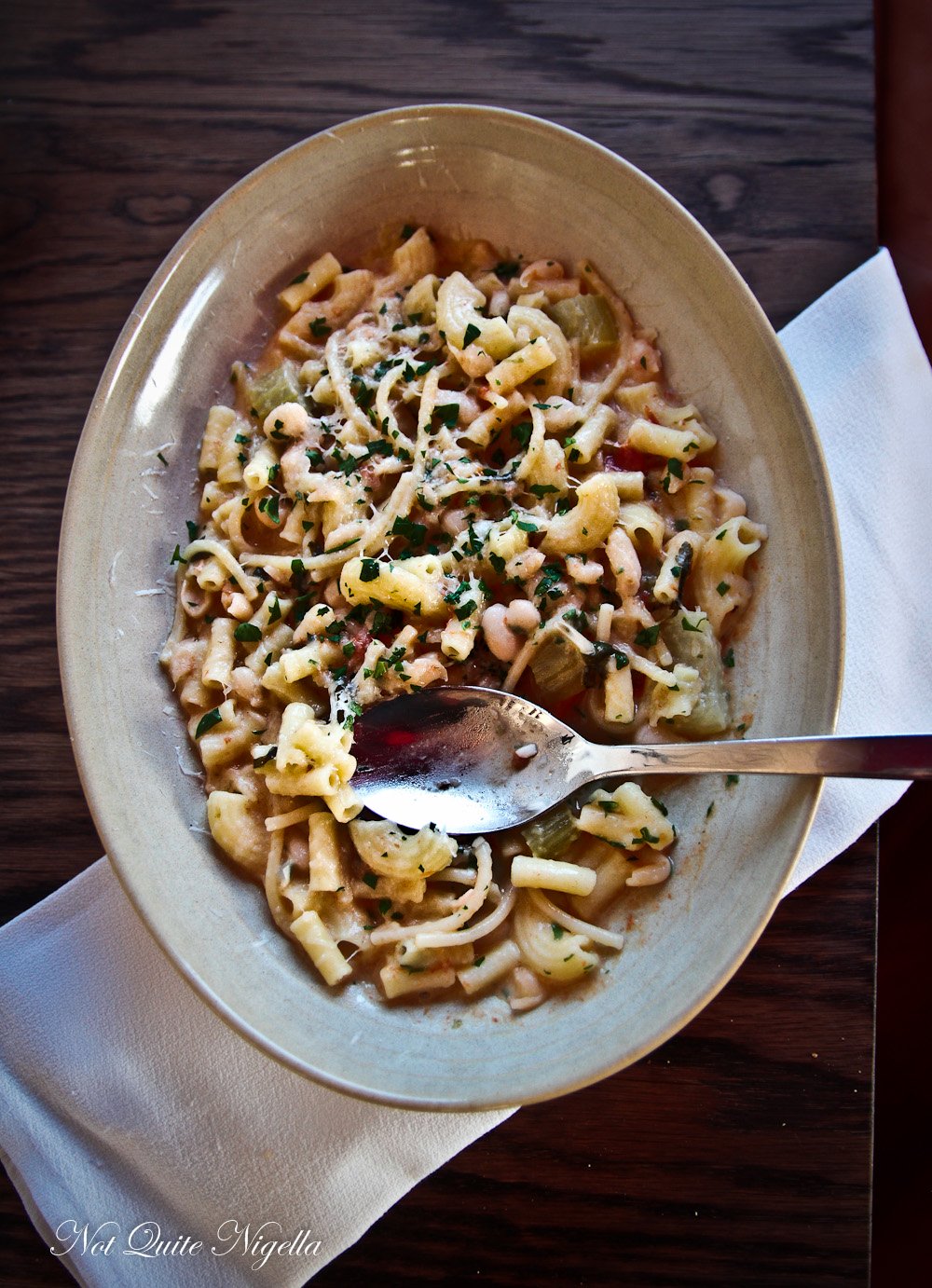 He explains that Pasta e Fagioli came about as the dregs from the pasta packets and leftovers were used. Items like eggs, cream and meat were used sparingly and there's a focus on staples - pasta, beans, legumes and vegetables. Massimo's recipe is based on a recipe taught to him by one of his mentors, Armando Percuoco of Buon Ricordo. The two bonded the first time they met - they are both from Naples and the two have been dubbed "the two blue eyed chefs."

While the beans are the hero, Pasta e Fagioli relies on ingredients like the rinds of reggiano cheese and the skins from smoked pig's trotters or pancetta to give it additional flavour. "I always save the rinds," Massimo says. Growing up in Tasmania, his mother grew everything in the garden and not a single inch of space was unused. Small spaces grew herbs like rosemary. He recalls the nature strip growing tomatoes and as a teenager he wasn't allowed to play basketball in the space lest one of the tomato plants be disturbed. Of course he did play there and any stray balls would necessitate a careful rearranging of any disturbed tomato plants.

So tell me Dear Reader, do you have frugal recipes or tips? And do you tend to eat soup as a meal in itself or in addition to other dishes? 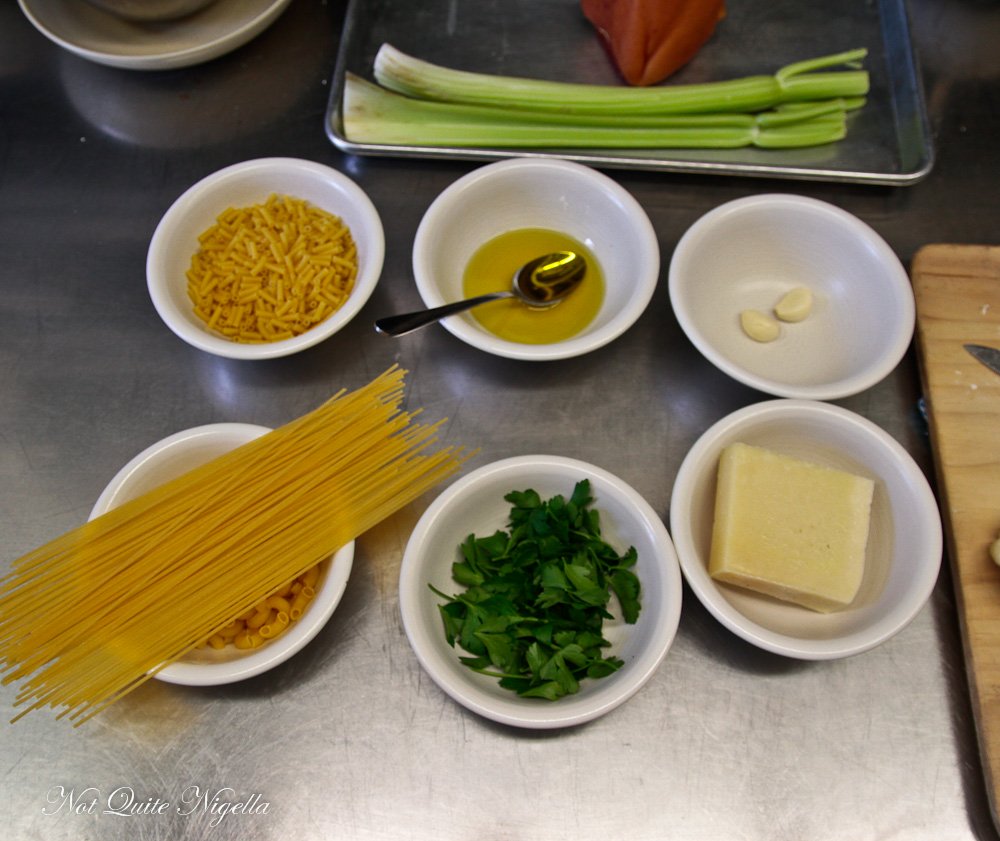 Step 1 - Soak the beans for about six hours in a saucepan of water. Drain and replace the water, bring the beans to the boil and simmer until they are soft (about 45 minutes). Drain the beans, keeping the cooking water. 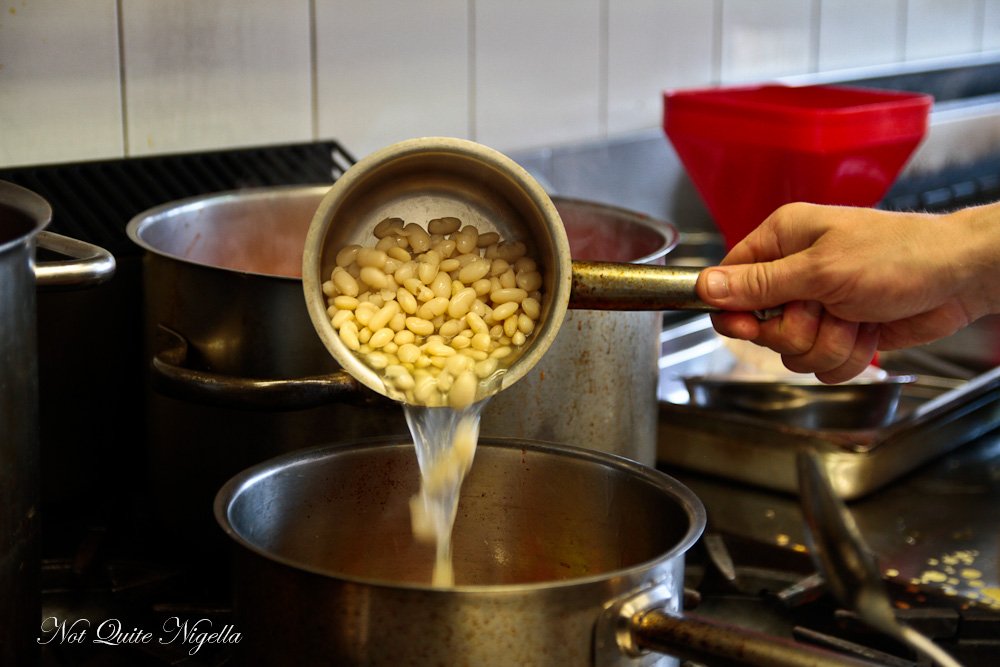 Step 2 - Heat half the oil in a large saucepan and sauté the garlic cloves, celery and pancetta rind for about 5 minutes. Add the tomato, cooked beans and 1 cup of the bean cooking water. Bring to the boil, then remove from the heat and pick out the garlic cloves and prosciutto rind. Season to taste. 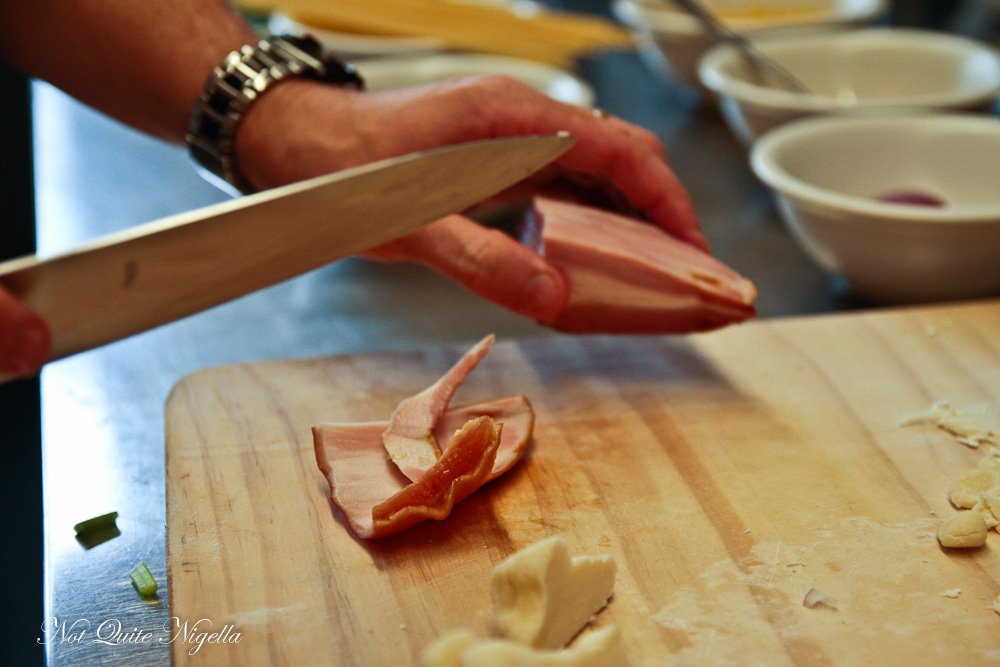 Step 3 - Cook the pasta in salted boiling water until a little under al dente. Drain and add to the soup. Return the soup to a simmer, add the remaining oil and cook for another 3 minutes. If the soup seems too thick, add more bean water.

Step 4 - Serve sprinkled with parmesan and parsley and drizzled with more oil.