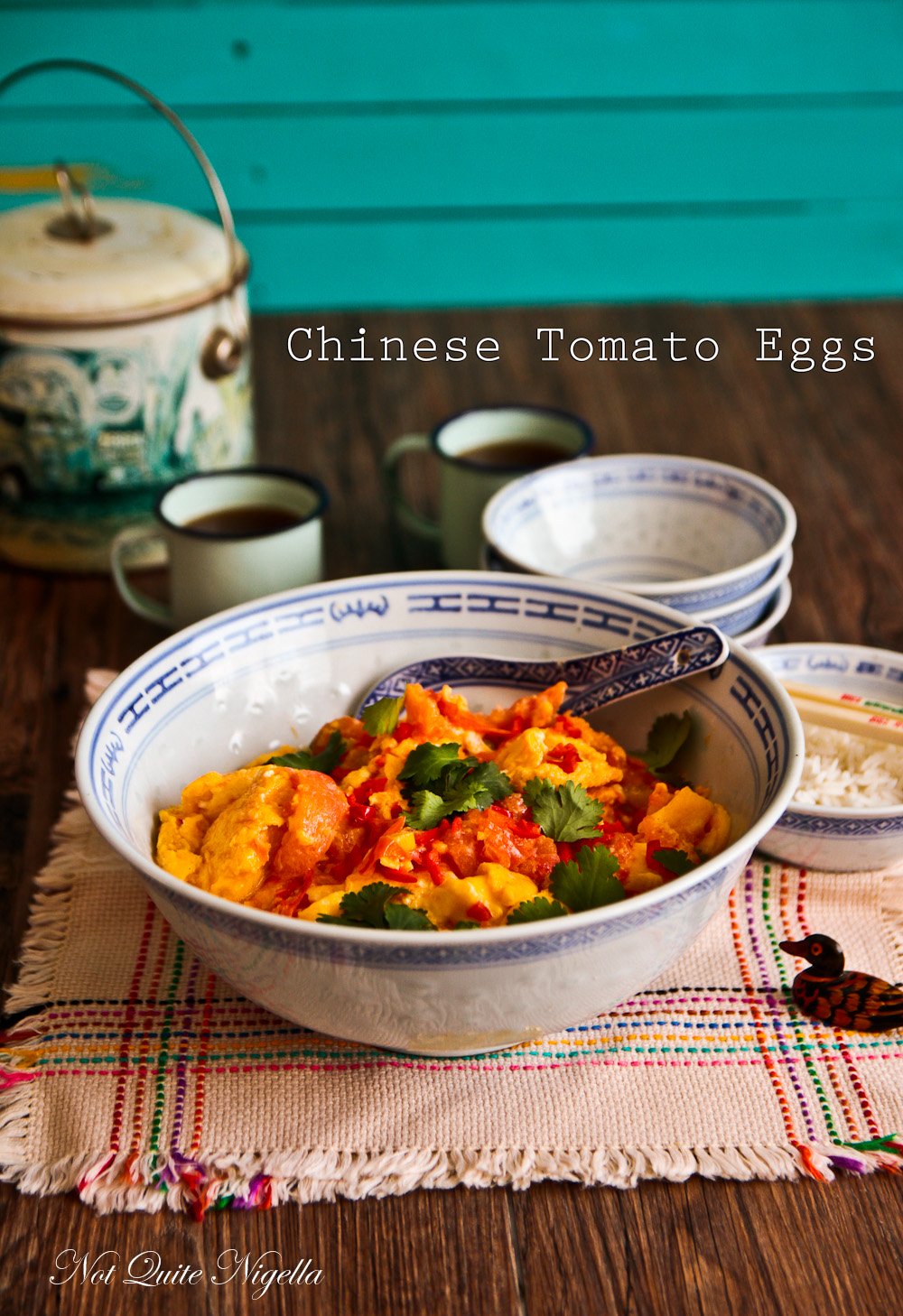 A friend recently remarked that I don't watch many movies. She's quite right, most of my movie watching happens on planes in between napping, eating or reading. While I watch television series with a devotional obsession I keep less track of what is happening at movie theatres. On one flight, I flicked through the options and settled on one film: Inception. It was under the "New Release" section but I didn't know much about it.

After about ten minutes I fell into a light sleep and woke with a start. I tried to follow what was happening but couldn't so I restarted the film as a snack was being served and tried to watch it again. After watching for about twenty minutes I realised that I was still none the wiser and started to drift off. Waking again I was completely confused at the movie and was convinced that I was the stupidest person on earth.

There was even a kid that was sitting behind me to the left that I was sure was judging me from his corner every time I rewound the movie (I'm sure he couldn't have cared less but sometimes it's all about me). It was only later that I learned that Inception is even difficult if you pay attention to it and has a complicated plot. There might even be aliens and other worlds there, I'm not sure. 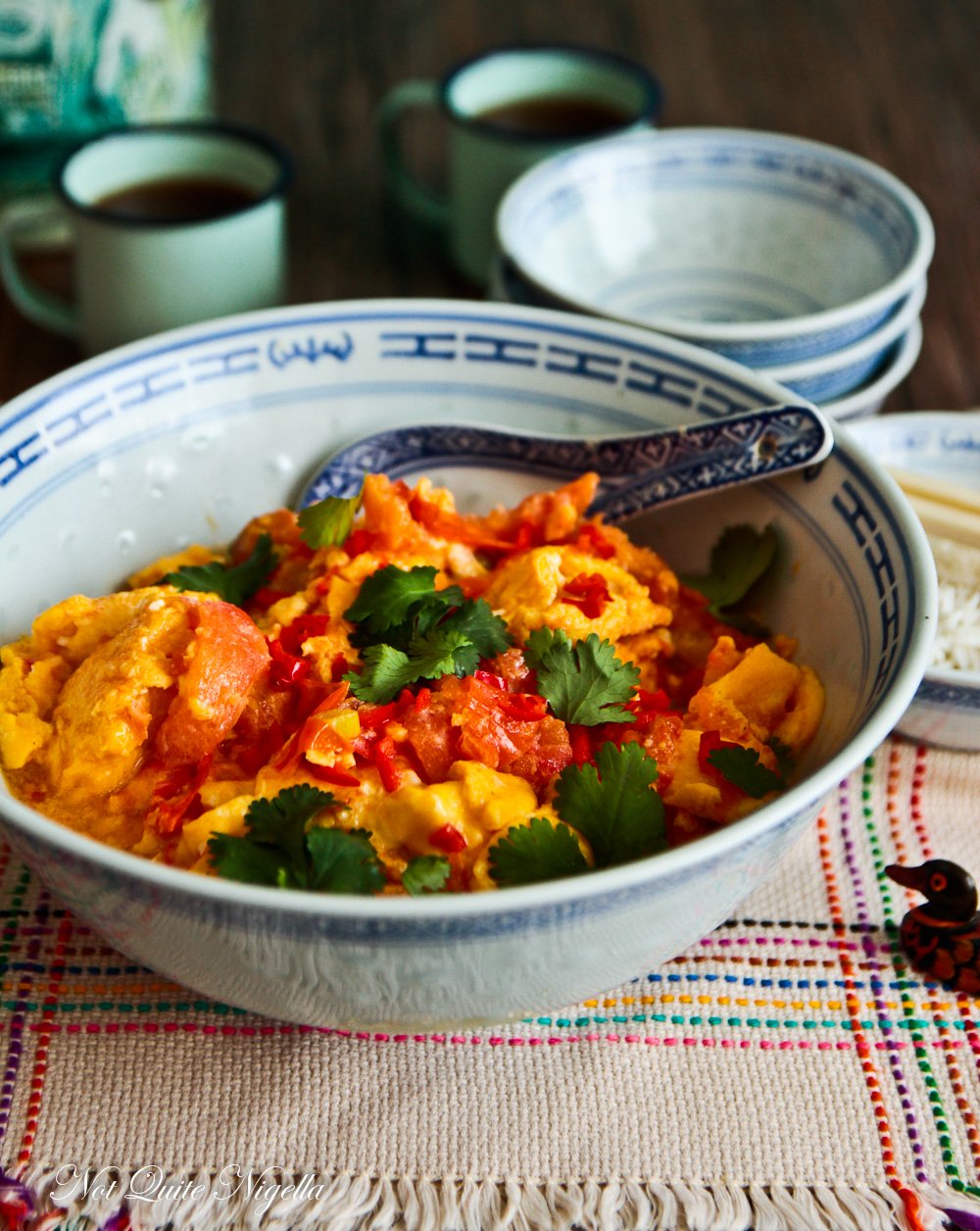 Sometimes, you need simplicity in life. And this dish is for those times. This isn't a dish that I grew up eating, in fact the first time I had it was on a trip to regional China. They brought out a plate of tomato and eggs and I made a snap judgment that it looked terribly boring. After trying some my friend and I looked at each other wide-eyed. Forget the other dishes, our favourite was this very simple tomato and egg dish.

Tomatoes aren't really a fruit that you traditionally associate with Chinese cuisine. They are a new world fruit originating in South America but are now popular all over the world. Apparently China is one of the biggest growers of tomatoes. The Chinese preserve them in summer to allow them to keep over winter and this very simple dish is one of the best ways to eat them. My standby for dinners is always to make an omelette and this is an absolutely delicious version of one.

I know that you're probably looking at me skeptically. I mean how exciting can eggs and tomatoes be? And not only am I asking you to make a tomato dish when they're not in season but stay with me or squirrel this away for when you need a 15 minute dinner. The key thing about this dish is that the tomatoes are not watery, instead they are full of flavour. I serve this with rice which is perfect for soaking up any sauce but on its own is just as divine.

So tell me Dear Reader, did you watch Inception? Did you understand it? I must admit that I never went back to watch it after rewinding it about half a dozen times.

Step 1 - Beat the eggs in a bowl with the sesame oil, soy sauce and white pepper. Heat a skillet or frypan on medium to high heat. Add a 1.5 tablespoons of oil and spread out the beaten egg. With a turner or spatula push the eggs gently to cook them although you don't have to cook these right through. Place back in the bowl once almost cooked. 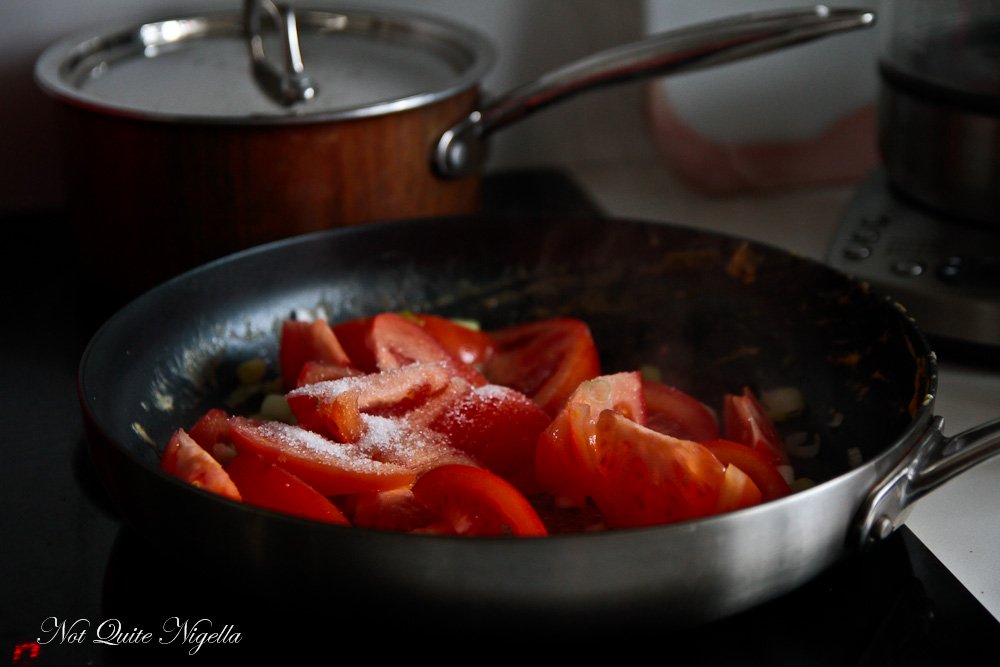 Step 2 - In the same frypan add the rest of the oil and saute the scallions and chilli for a few minutes. Add the tomatoes with the Shaoxing wine and sugar. Cook until the tomatoes become softer (but not mushy). Sprinkle some of the chicken stock powder on top for taste for balance adding more sugar if necessary (it depends on how sweet your tomatoes are). Place the egg back into the pan and stir gently and then place on a plate with some coriander leaves on top. 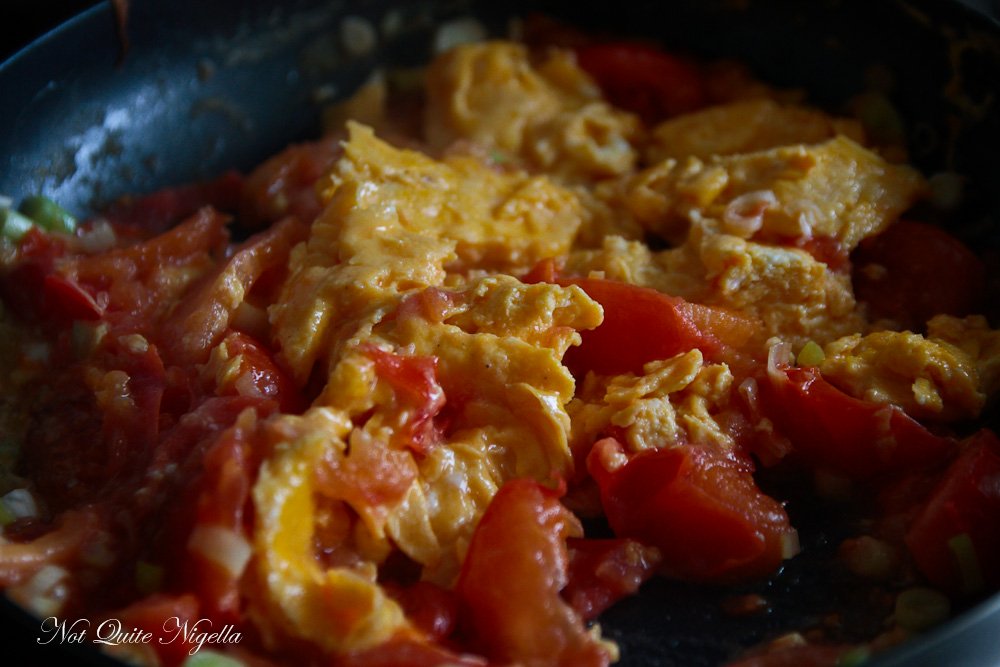