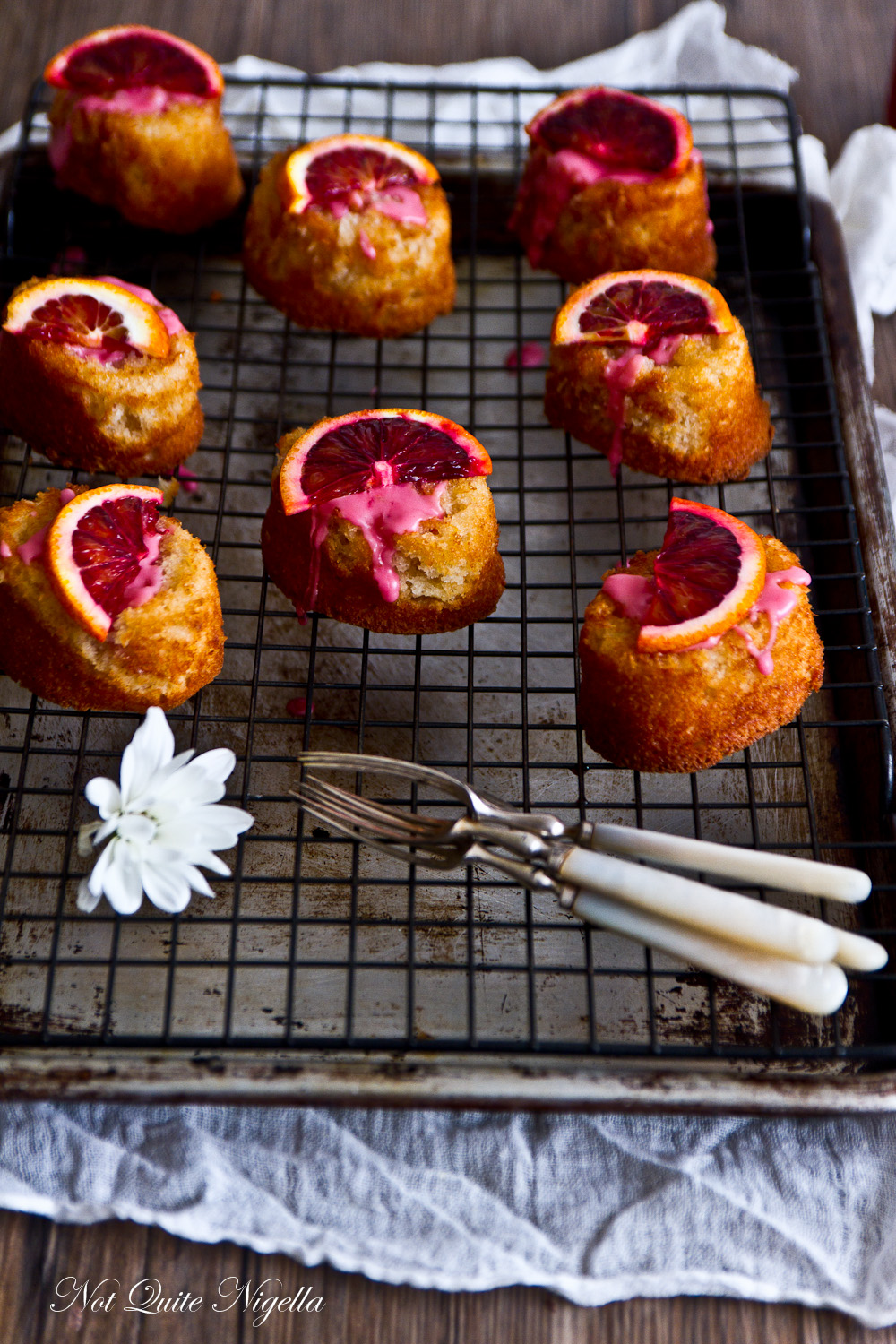 Mr NQN and I were having dinner at one of Sydney's most romantic and picturesque restaurants. Everything was going beautifully - the food was delicious and the service impeccable. Until the maitre'd came over.

"How are you tonight?" she said beaming widely at Mr NQN. "It's a lovely evening tonight-I hope you've enjoyed your meal so far sir?" she purred, her eyes never leaving him. At that point if anyone had asked her whether Mr NQN was dining alone or with someone, she may have been unable to answer the question because to her, I simply was not there. I didn't have to take a close look to know that her pupils were dilated.

About half an hour later she returned once and again she fixed him with the same beaming smile. This time she offered to show him the kitchen and then she looked at me. "You can come too," she said, like it was an after thought. Feeling like a reluctantly invited member of a threesome I declined. When he returned I whispered to him that it was obvious that she was flirting with him. Being completely oblivious to these sorts of things, he denied it and I told him to simply watch her next approach. Because I was sure that there would definitely be another.

It was towards the end of the dinner that she swung by again. Again that gleaming smile came out and she asked, "Sooo how was your evening? I hope you had a delllicious night!" with an emphasis on the "l" in delicious. Mr NQN now looked at me wide eyed and his mouth agape. His eyes signalled a newfound comprehension accompanied by an "Oh my god!" expression. He looked back and forth between us as if to say to her, "Look, there's my wife!" 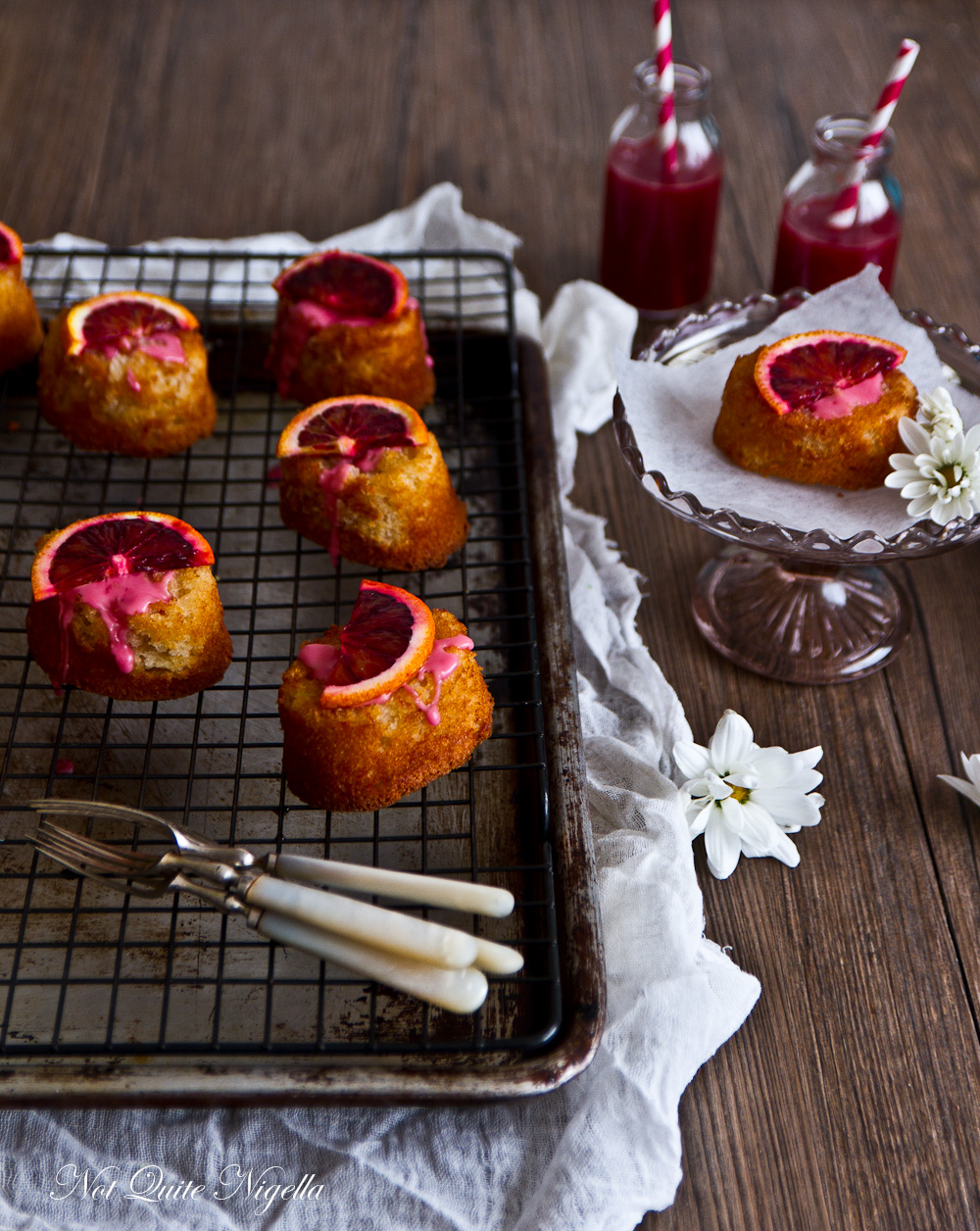 She finally turned her gaze to me and left after a brief sentence or two. Later as we were leaving he pulled up his coat around his neck and admitted that once he realised what was going on, that it was as subtle as a sledgehammer. "Why didn't you get mad?" he said. I said that I found it amusing but of course had she actually propositioned him, well things could have gotten bloody...

Whenever I make something with blood oranges, my mind turns to Dexter and other bloody urges. Blood oranges are those wonderfully crimson citrus fruit that have a short but much anticipated season. In Australia they're available from August to October and we are in the midst of the season at the moment. I bought them from the markets for $1.30 a kilo and knew that I'd either juice them or bake with them as they're such a beautifully coloured fruit. The red in the flesh is from anthocyanins an antioxidant pigment and they are a good source of Vitamin C. The fruit itself has a slightly different flavour from regular oranges with a slight berry flavour.

There are several types of blood oranges and some vary in the amount of red in the flesh but I found this batch uniformly rich crimson in colour so I wanted recipe where I could display their gorgeous hue. I had already made a super moist flourless blood orange cake and a spectacular upside down blood orange cake but I wanted something different. I decided to make some friands out of them as they would be perfect to take to a picnic. I made these quickly, not knowing if they would work out and I made these gluten free with the addition of coconut. I accidentally over beat the egg whites until stiff (my inattention!) but spooned them into the tin and hoped for the best.

They were even better than what I could have imagined. The orange and coconut are a wonderful pairing together and because the blood oranges were so vivid in colour, they produced a gorgeous pink simple sugar glaze. This is one of those pushy recipes where I urge you to make them as they are really so very good! I decorated them with a segment of the fresh fruit and before I knew it, all murderous urges had disappeared and it was all flowers and picnics instead.

So tell me Dear Reader, do you notice flirtatious behaviour? What would you be jealous or amused? And have you ever tried blood oranges and do you like them? 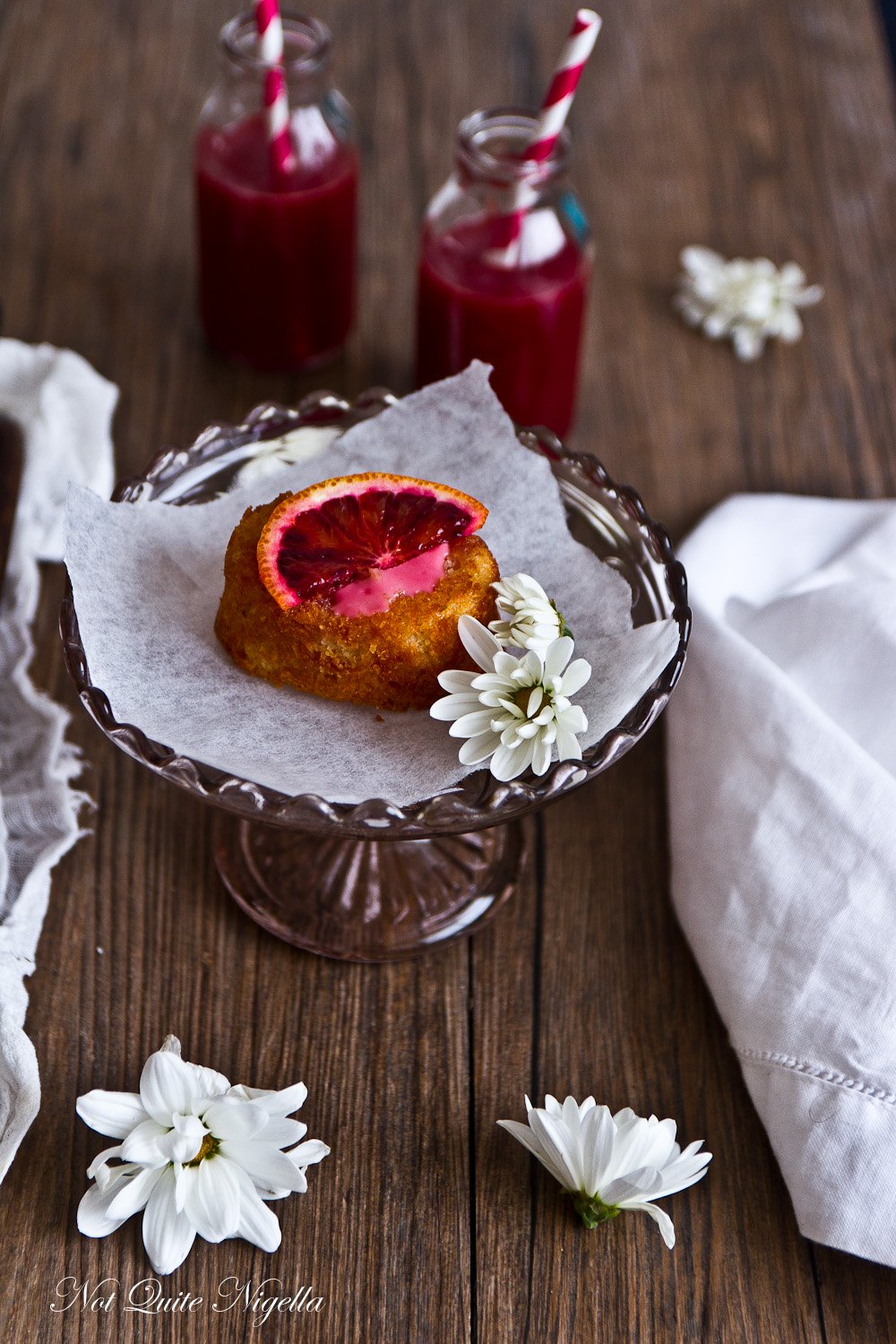 Step 1 - Preheat oven to 180C/350F and spray a friand tray with non stick oil coating. These are light and delicate so line the bases with an small square or round of parchment paper. 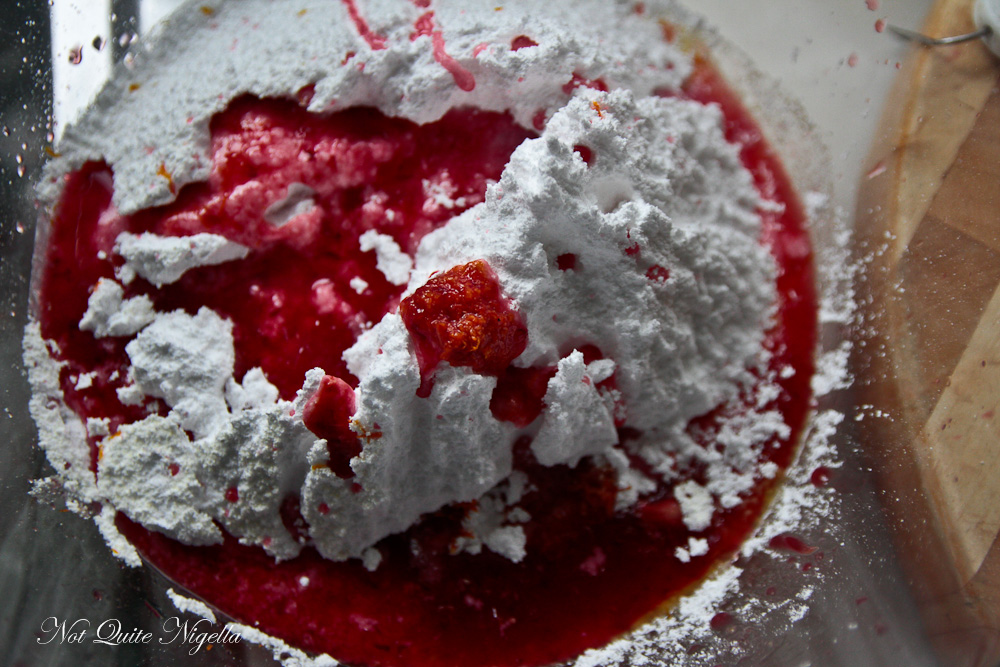 Step 2 - Place the melted butter, icing sugar, almond meal, coconut and baking powder in a large bowl. Finely grate in the zest of two of the blood oranges and juice one of the oranges (I juice the orange in a separate bowl in case there are pips) and add the juice into the mix. In the bowl of a very clean electric mixer, whisk the egg whites until stiff peaks form. Add a third of the egg white into the wet mix and fold. Then add the rest of the mixtures in two batches until combined. 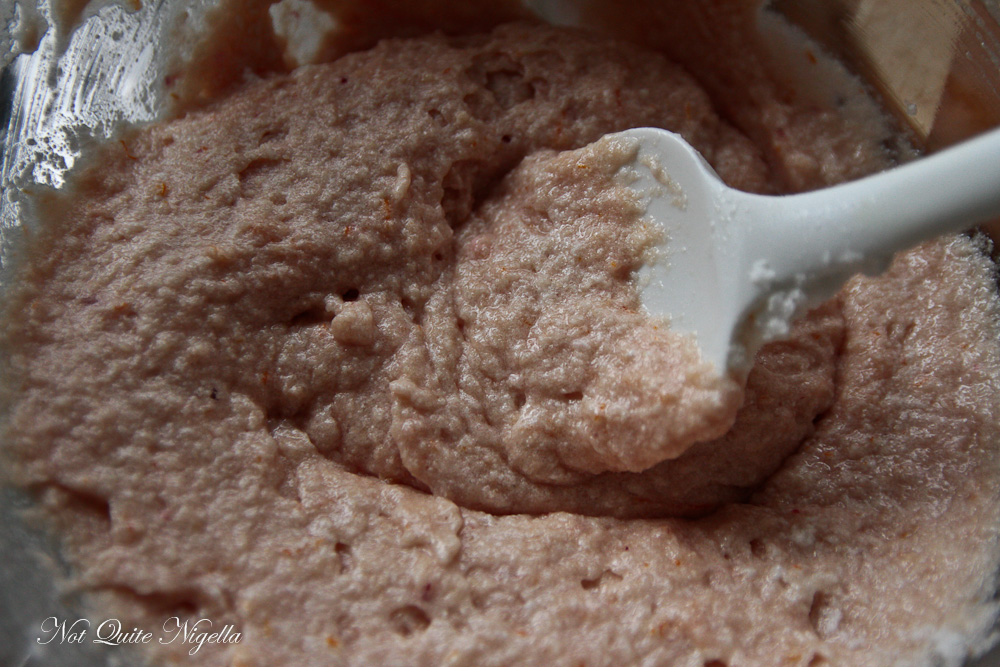 Using two tablespoons, spoon the batter into the prepared tray filling the cavities 2/3 of the way up. Bake for 20 minutes until a skewer inserted comes out clean. Remove from oven and allow to cool in the tin for 20 minutes before removing from the tin. 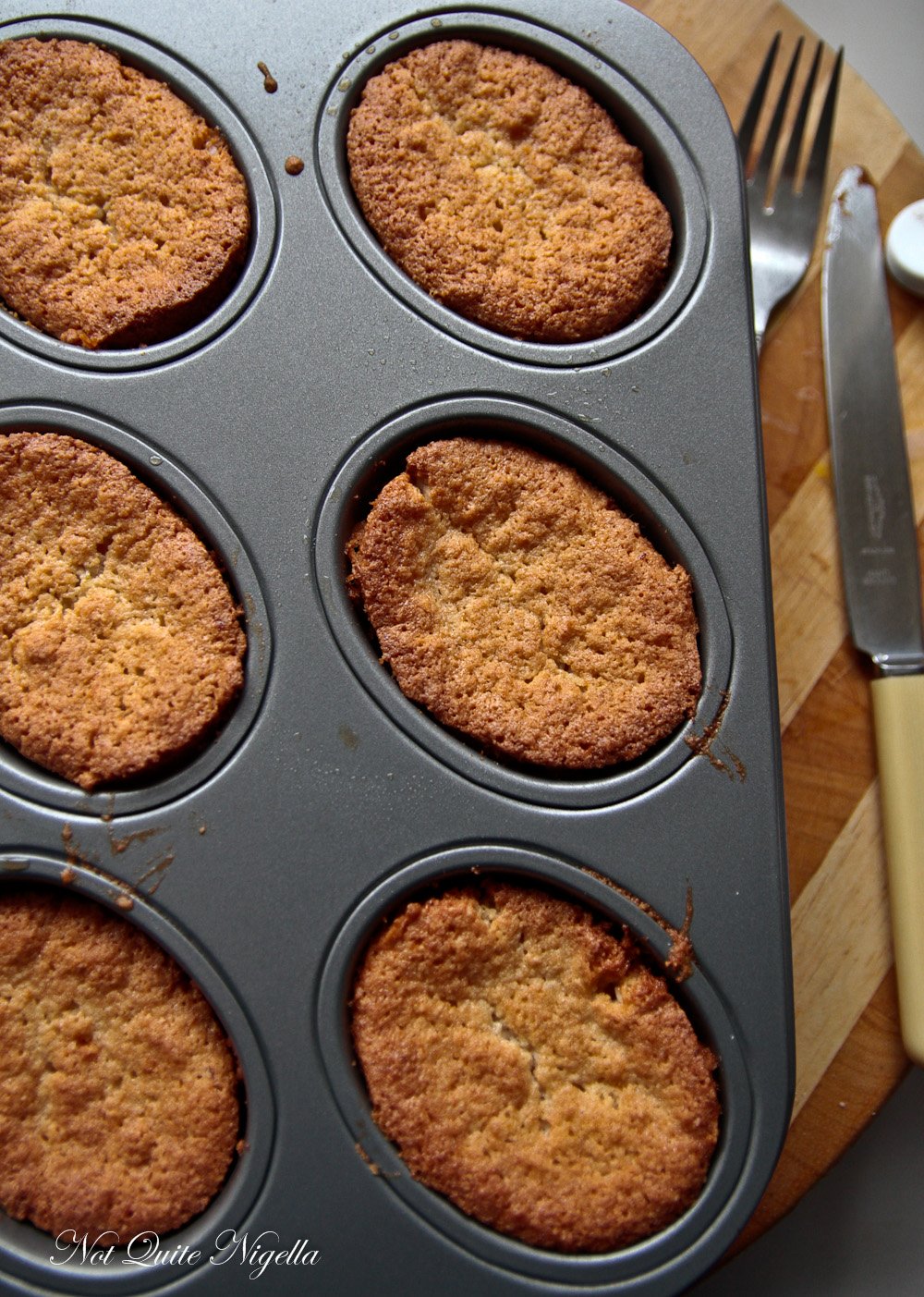 *Step 3 - * Sift the extra 1/2 cup of icing sugar into a bowl and add some blood orange juice to form an icing. You don't need much juice to make the icing, just a tablespoon or so and add a little water if it doesn't come together. Drizzle the pink icing over the upturned friands. Slice the remaining blood orange and place half moons on top.