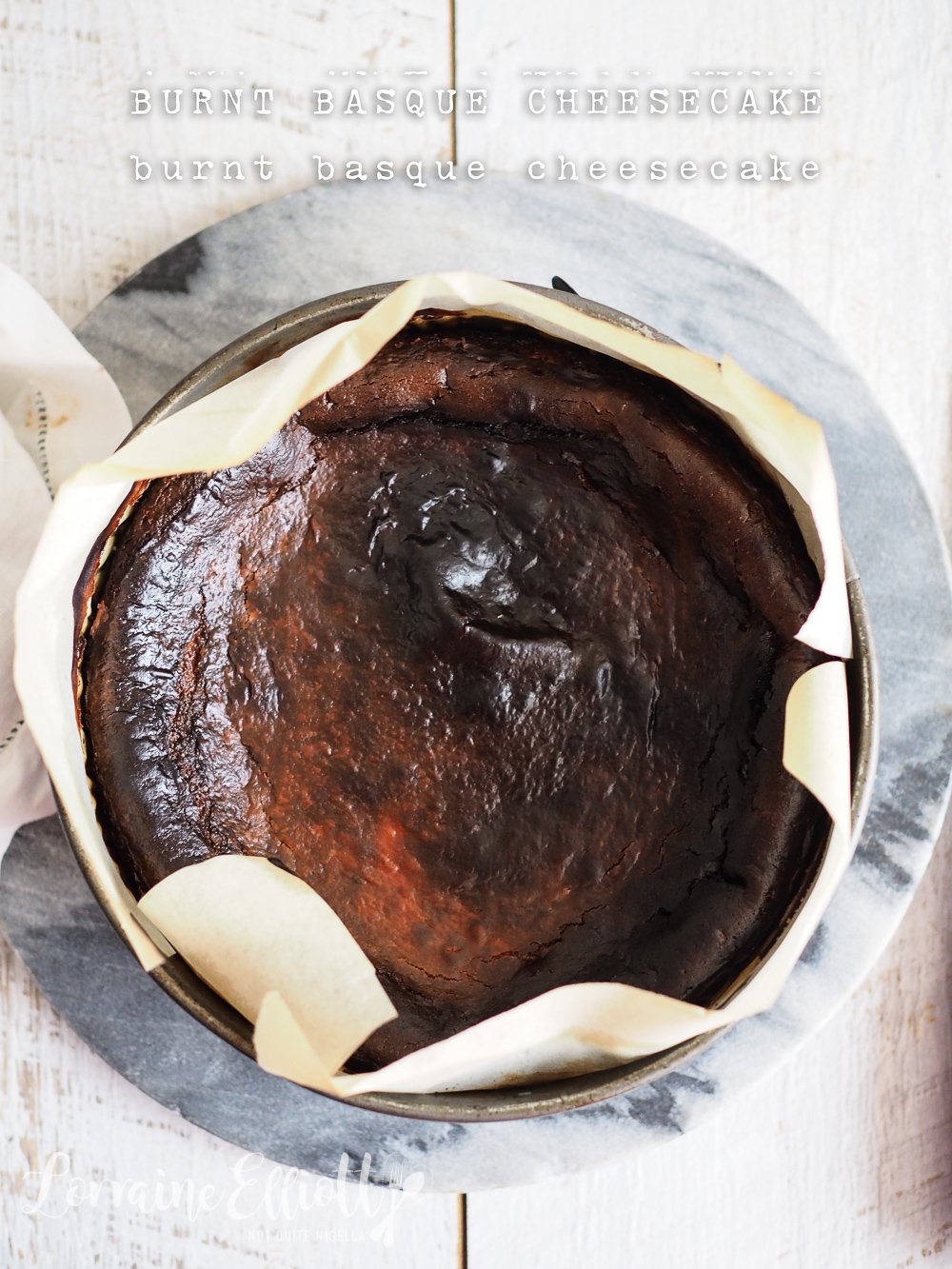 Burning a cake deliberately? Yes! This burnt Basque cheesecake is possibly the easiest cake you will ever make (one bowl, one whisk, 5 ingredients) and produces a wonderfully smooth and delectable cheesecake that is as delicious as it is striking. I called her Bonita. And Dear Reader, this is a pushy recipe!

I made this cake for Nina and Garth. Not just because she burns food when she cooks but because they were doing us a really huge favour and it was to say thanks. 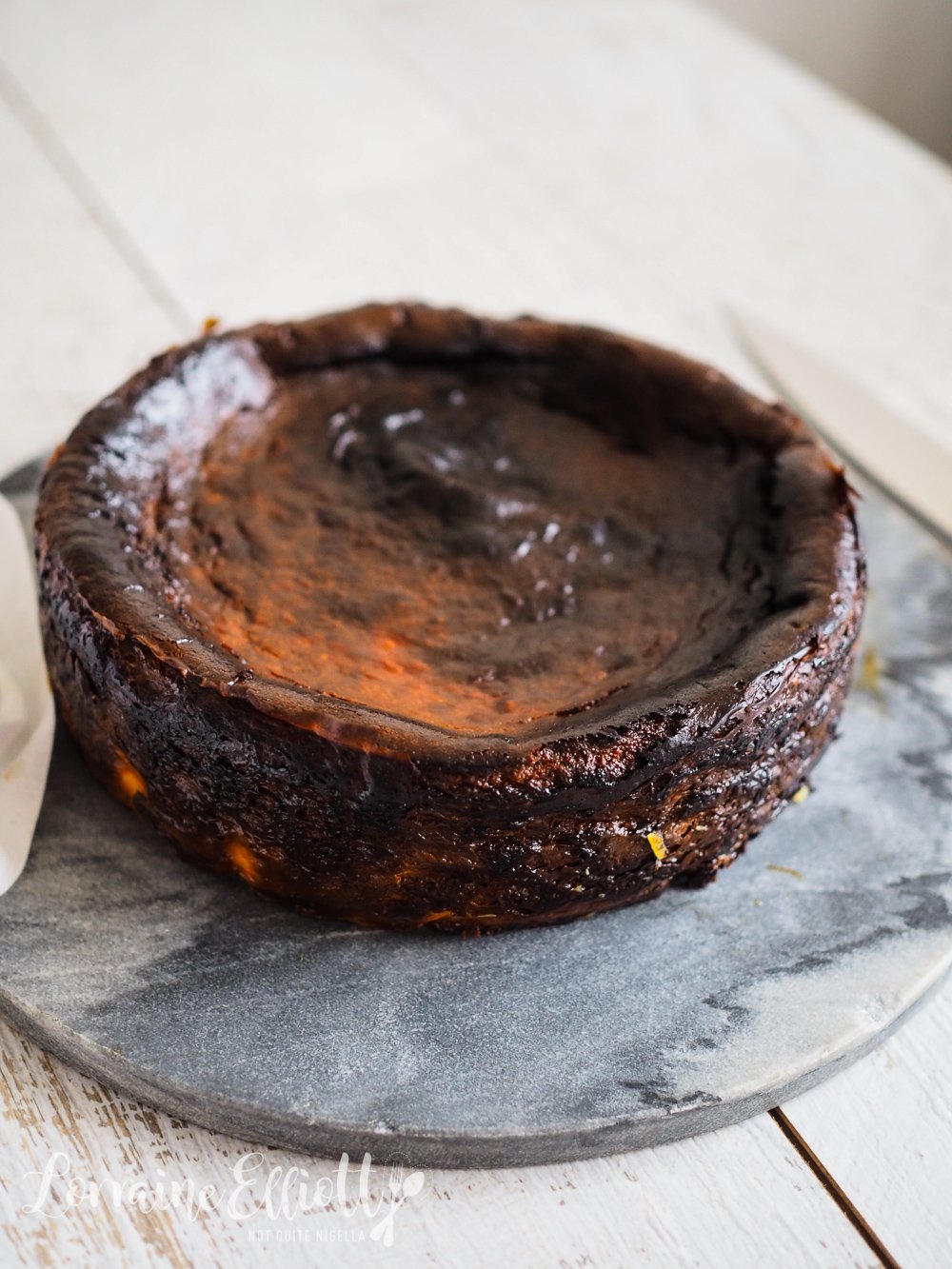 Remember the rat that we suspected had moved in? Well I started to have nightmares about it eating, partying and inviting rats while we were overseas for 2 weeks. So I called a guy (the "rat guy") and asked him if he could have a talk to Nigel the rat and ask him to politely leave.

The exterminator came over the next day. Apparently rats and mice have become a huge problem in the Eastern Suburbs of Sydney with the light rail going in. He spent a bit of time looking around the kitchen and deduced that we had a lone mouse. 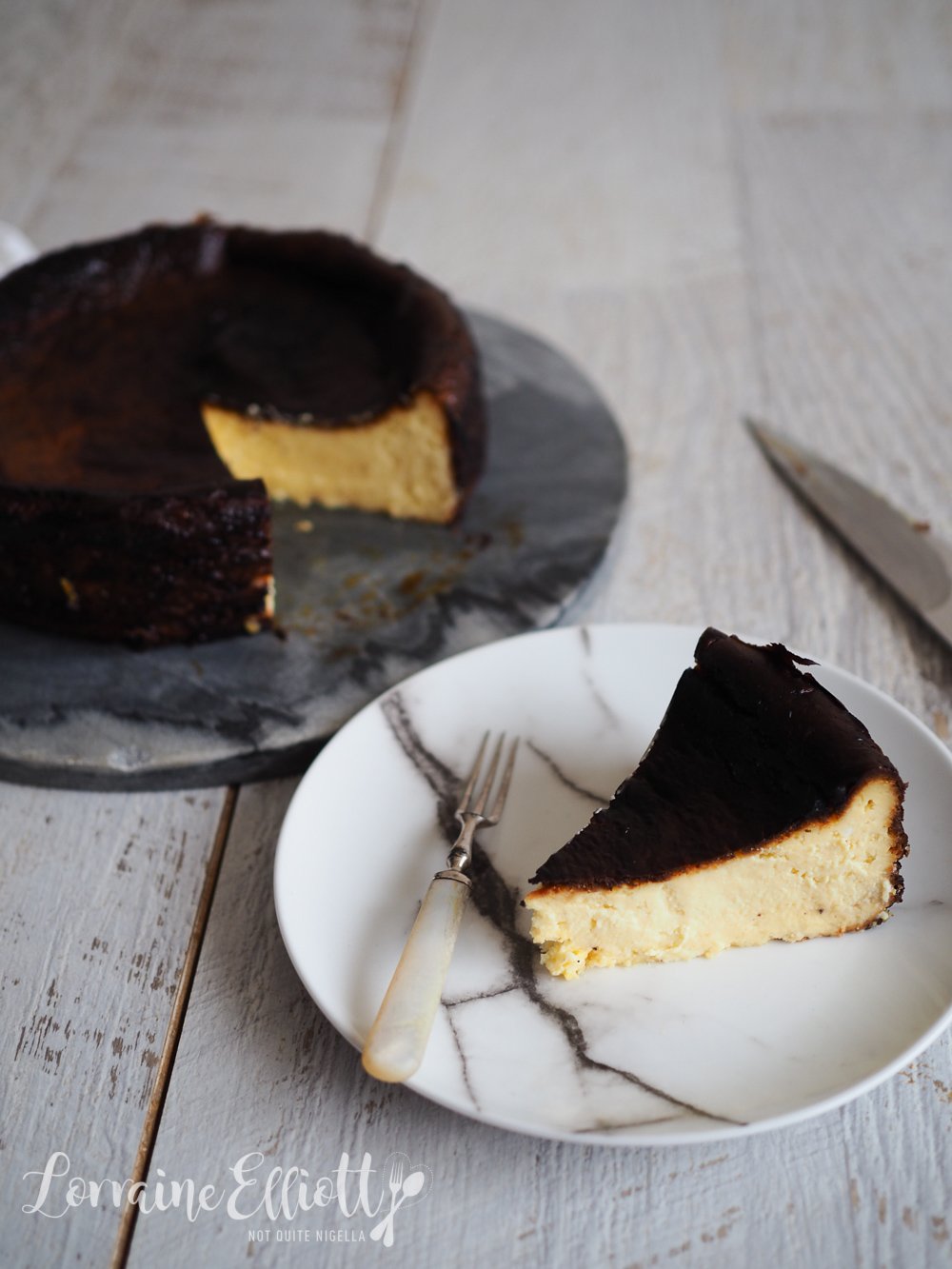 Sort of off topic: I actually wanted a mouse so badly as a kid. I walked all the way to another suburb three times to the pet store to buy one (my parents wouldn't let me call them to see if they had any mice in). And every time they were out so I never got my mouse but I do have a soft spot for mice.

Anyway, I was feeling a bit sad about this lone mouse but as I'm unable to communicate with rodents I couldn't strike up a bargain where I'd buy it miniature furniture and leave biscuits out for it to snack on in return for staying in the corner and not inviting friends over. 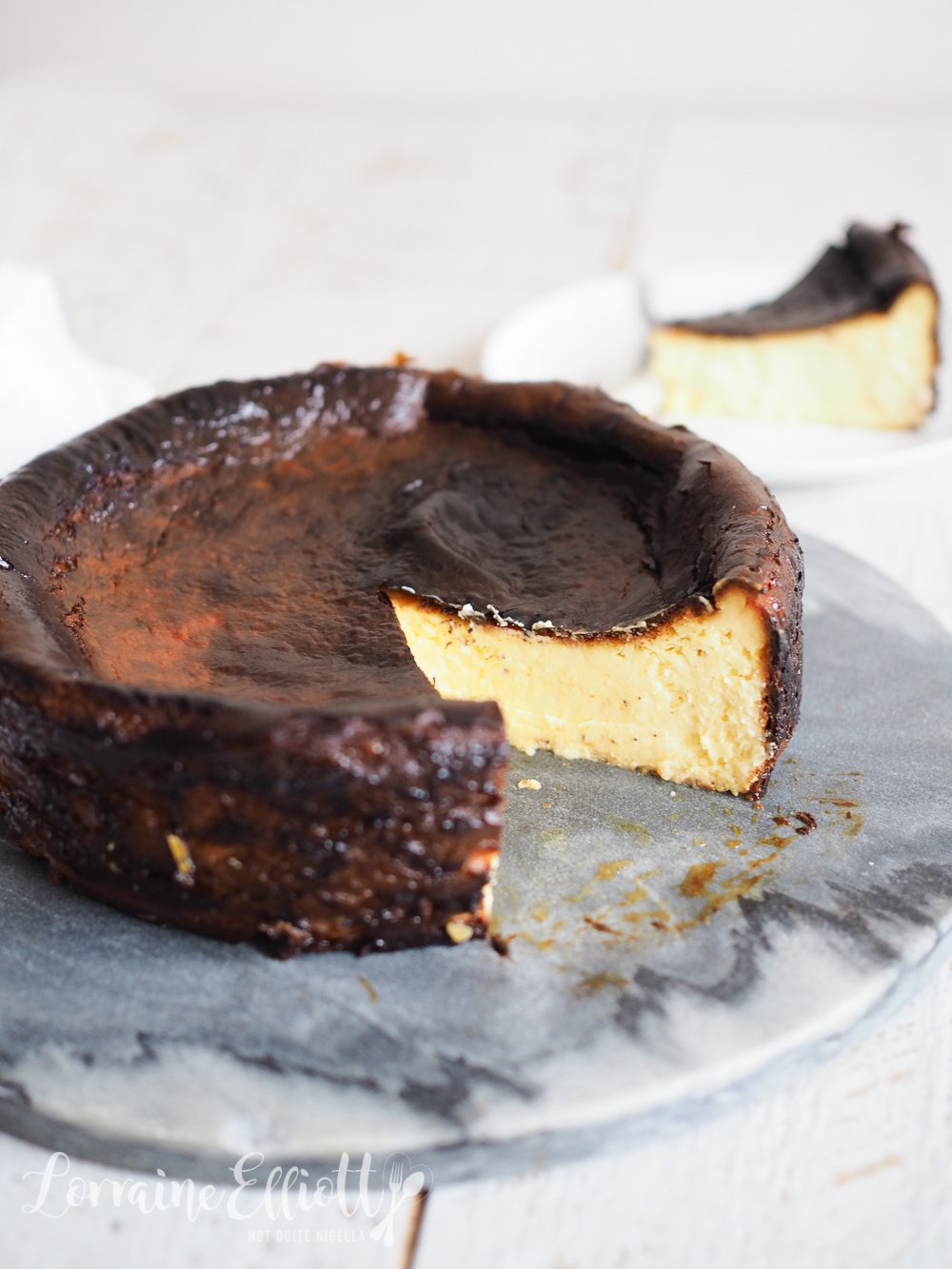 The exterminator said that he would put some bait out that would make the mouse dehydrated and they'd run away to seek water sources.

The only issue would be if mousey expired in our apartment while we were away because the smell would be overpowering after two weeks. So we asked the most capable people we know, Nina and Garth. Well technically Nina was out because she's a vegetarian and I think she'd probably cry if she had to pick up a dead mouse so it was up to Garth to help us. I handed them the cheesecake and a set of keys to our apartment. We asked him to stop in twice while we were away and if mousey had left this earth he would dispose of him but hopefully he had left of his own accord. 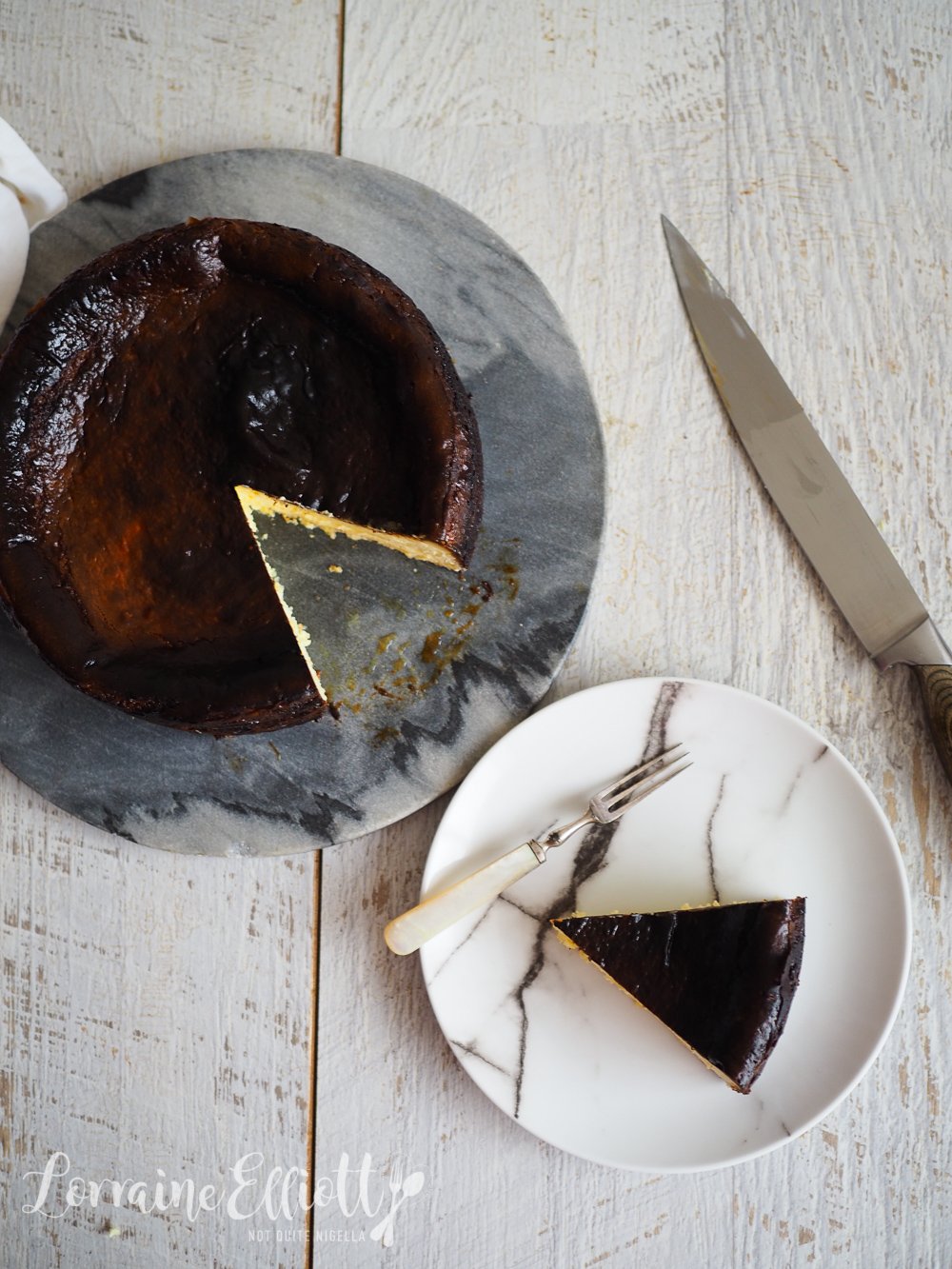 "I found the mouse," Garth messaged Mr NQN while we were away.

"Definitely not alive," answered Garth. Mr Mousey had left the earth and I was a bit sad that it had to come to that. There was no smell but Nina and Garth had left their mark. For the next couple of days we got shocks and surprises all carefully orchestrated by the naughty duo who had hidden a range of things to prank us. 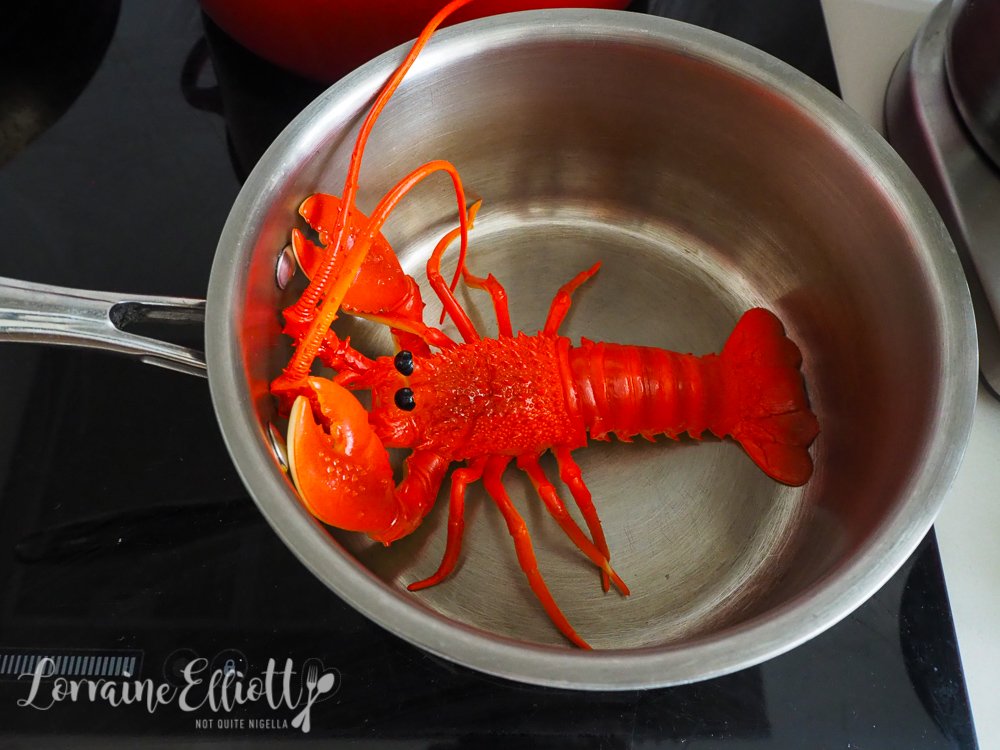 When Mr NQN opened his work bag he found two plastic snakes. When I opened a pot I screamed when I found a plastic lobster and when I lifted a bag there was a fake mouse underneath it. Just when I thought we had found it all, I had a shower and went to grab a fresh towel only to find a snake peeking out from on top of the towels! 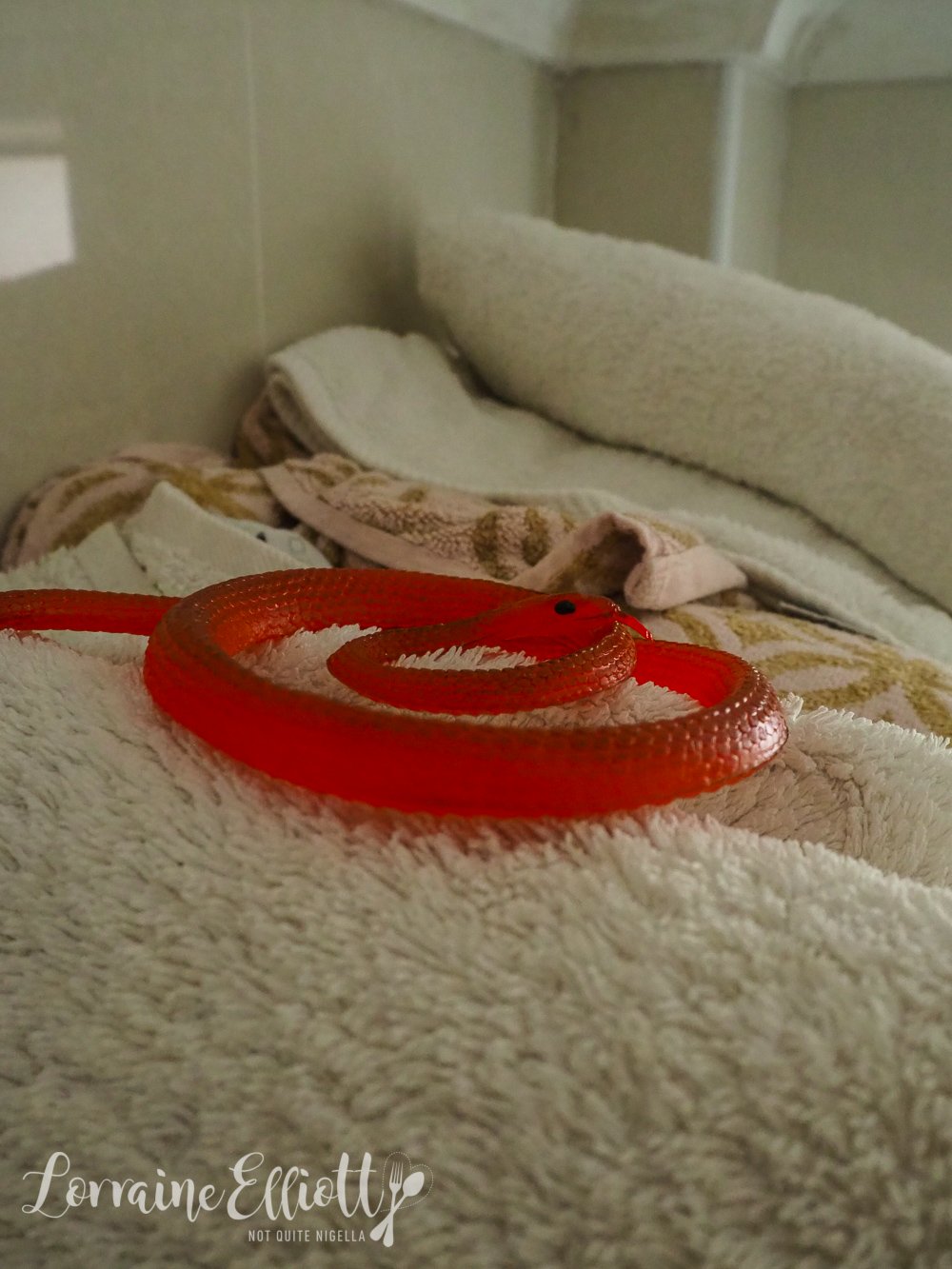 So tell me Dear Reader, do you ever feel sorry for mice or rats? Would you be capable of disposing of a dead mouse? How often do you burn food intentionally or unintentionally? 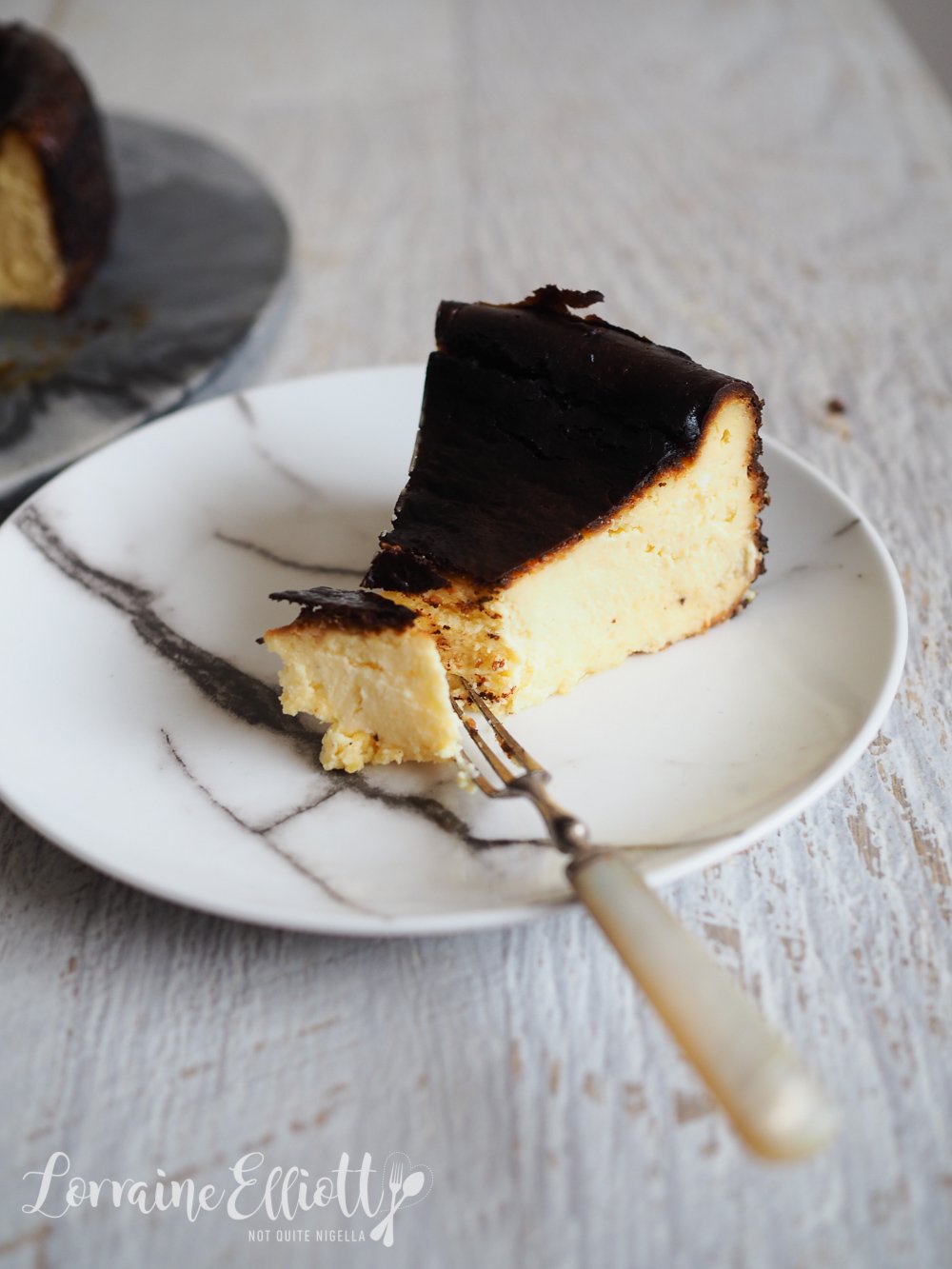 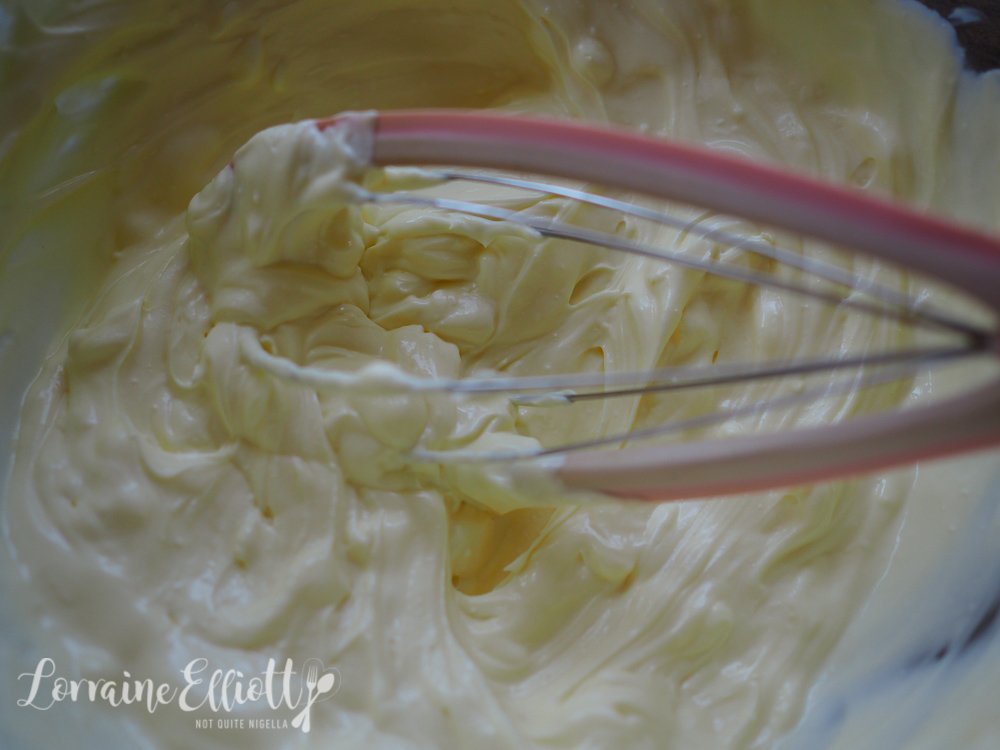 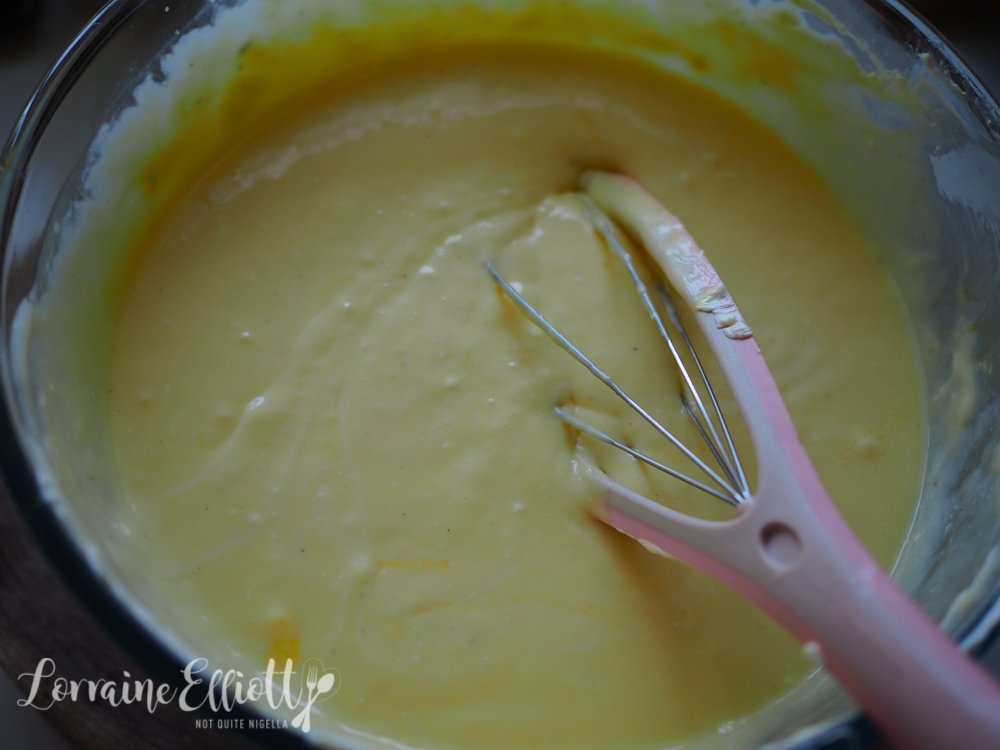 Step 2 - Warm the cream cheese until soft and smooth (microwave it on 30% until it is soft). Whisk until smooth. Add the sugar, cream, vanilla and salt and whisk until smooth and then add the eggs and mix until incorporated. 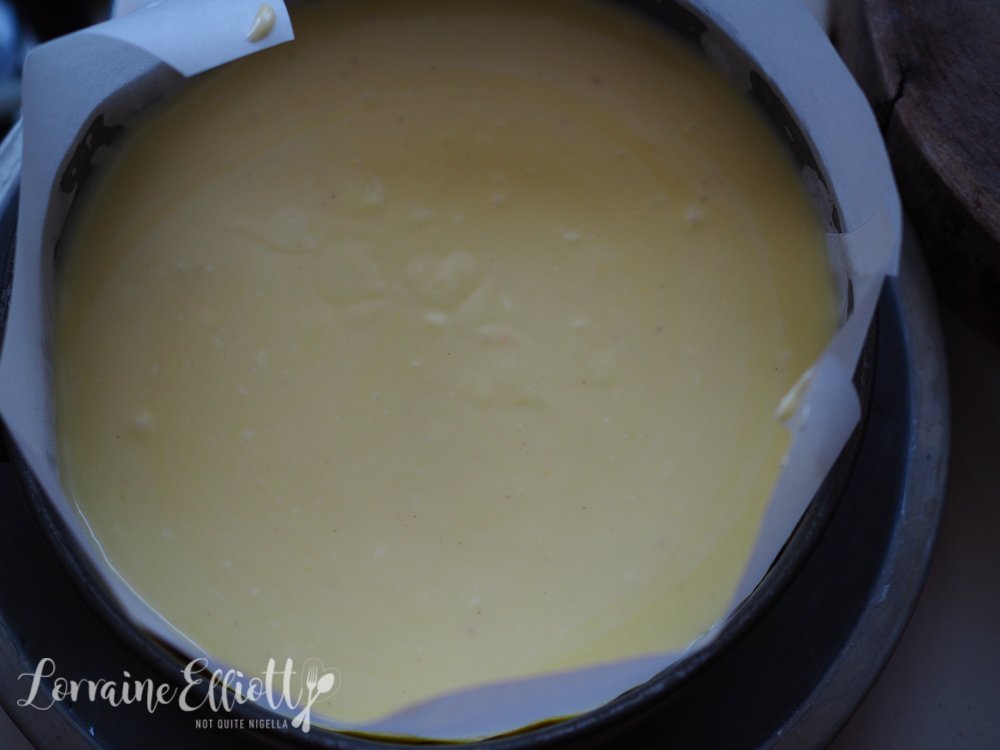 Step 3 - Pour into the prepared tin and in gently against the counter to remove any air bubbles. Bake for 50 minutes or until the top browns. If you need to, increase the oven temperature to 230C/446F and bake for 10 minutes to brown it further. Cool completely and refrigerate. You can serve this slightly warm or cold. 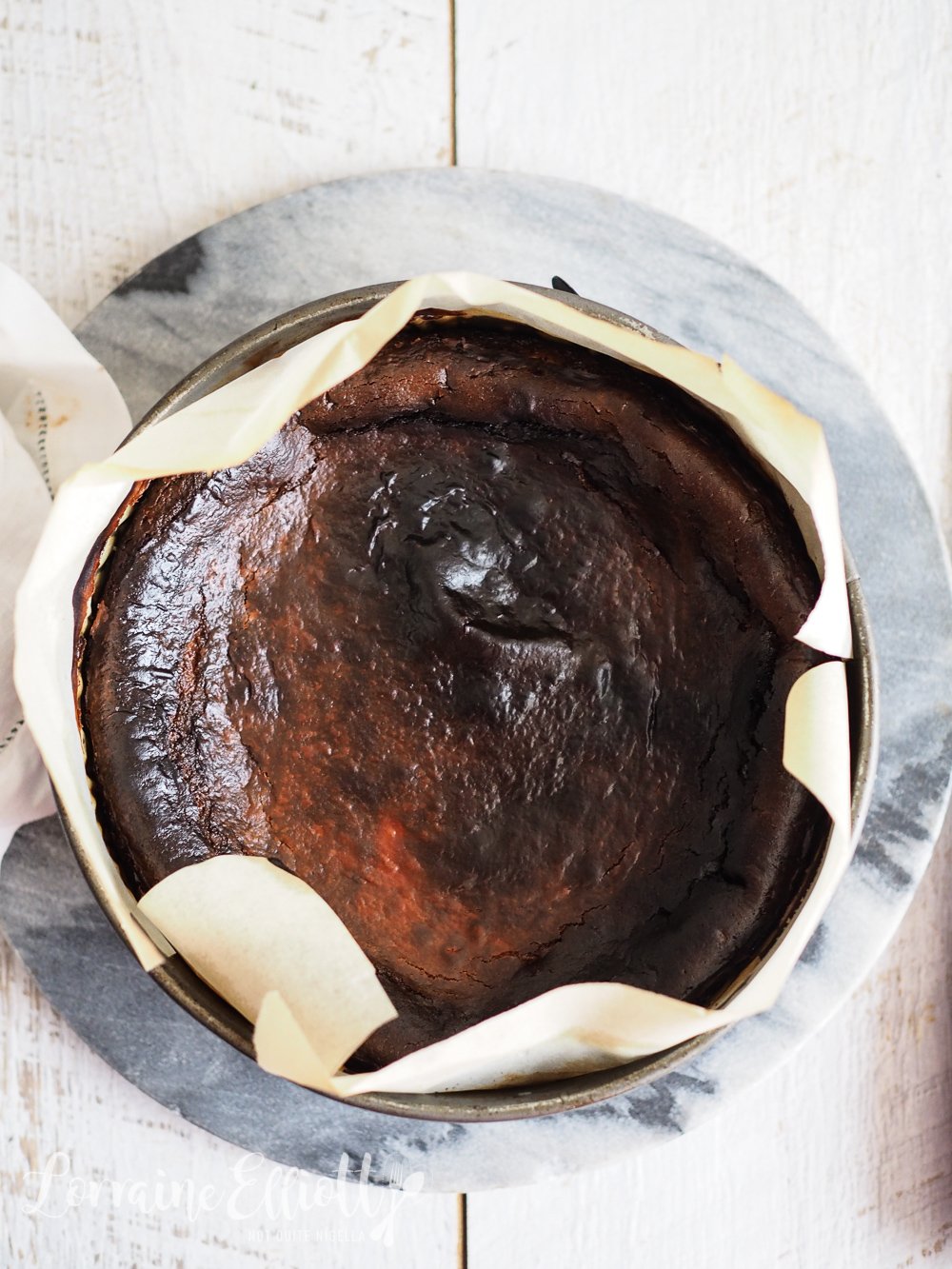