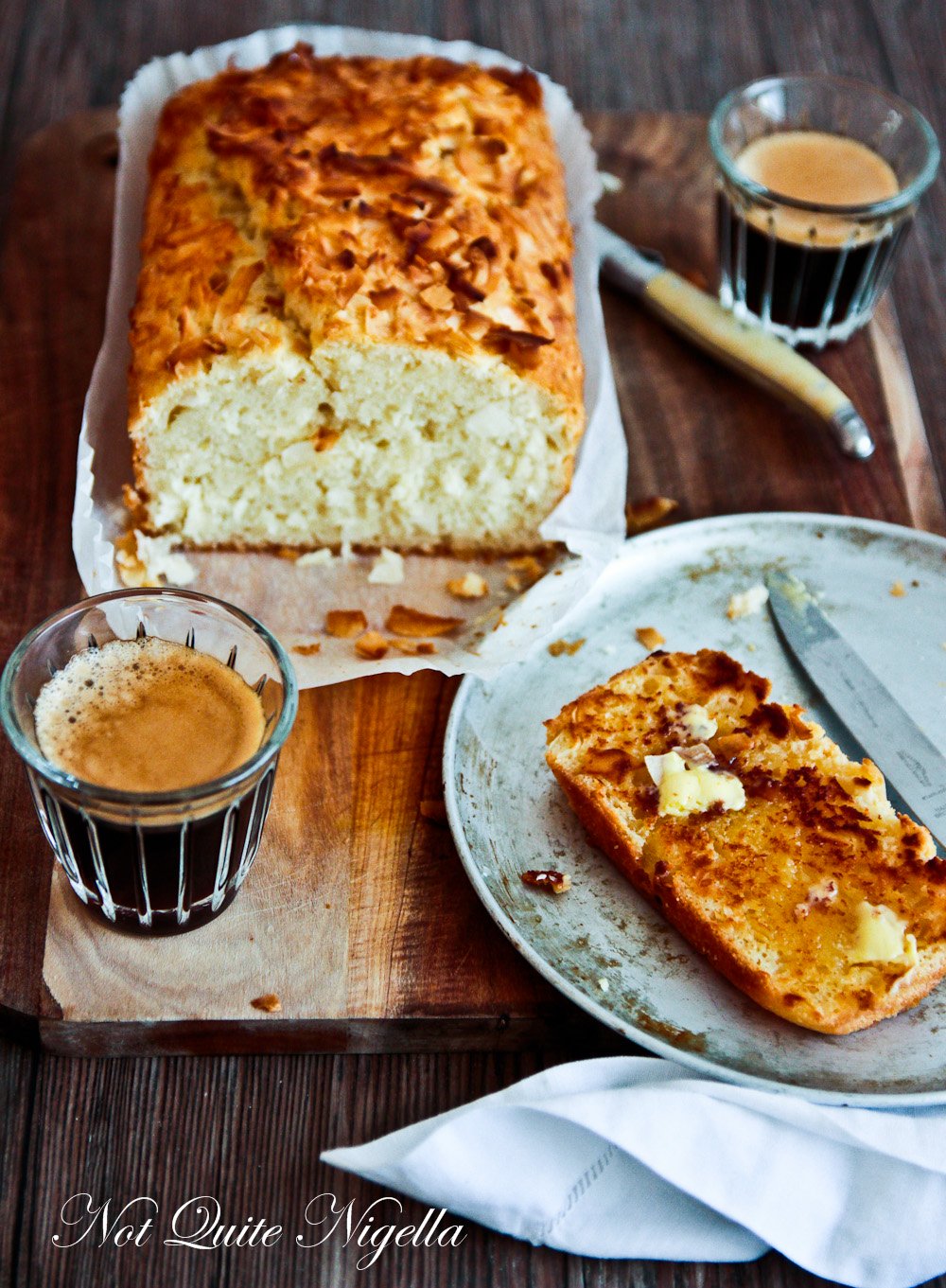 There, I've said it. And I'm ignoring Mr NQN snorting in the background and nodding his head with a "Hell yeah" expression and head wobble. Who knew he could do that head wobble?

You see I was going out for my birthday. A new everything was bought (dress, shoes, bag) and we were going to one of the best restaurants in Sydney. And I had to ruin everything by being a dag and bringing along some foil wrapped coconut bread for Belinda and Nick. I know logic tells me that there's nothing wrong with plying your friends and family with treats but perhaps bringing out a little foil wrapped brick during dinner from your clutch bag is a step too far. 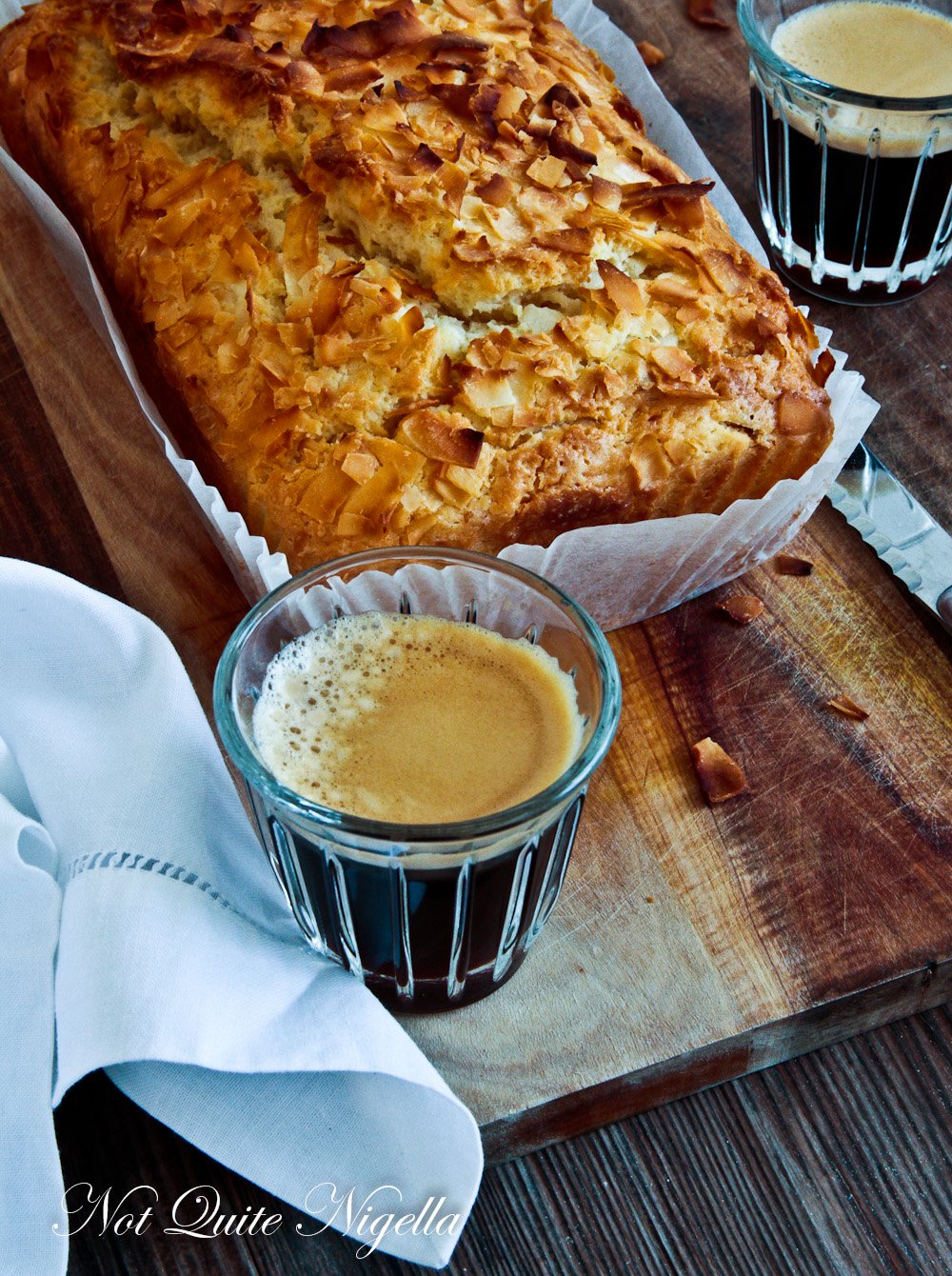 What I passed across the table were slices of this coconut and lime bread. We had just gone away for a weekend away and ordered coconut bread. Belinda listlessly picked at the coconut bread and suggested that I could make better so I decided to bring them some of my coconut bread. There are loads of coconut bread recipes out there but I have to say that this is my favourite. Whenever I order it at a cafe I'm always disappointed when I compare it to this one. I did however pick up one trick from that cafe and that is toasting or grilling the bread just before serving it. 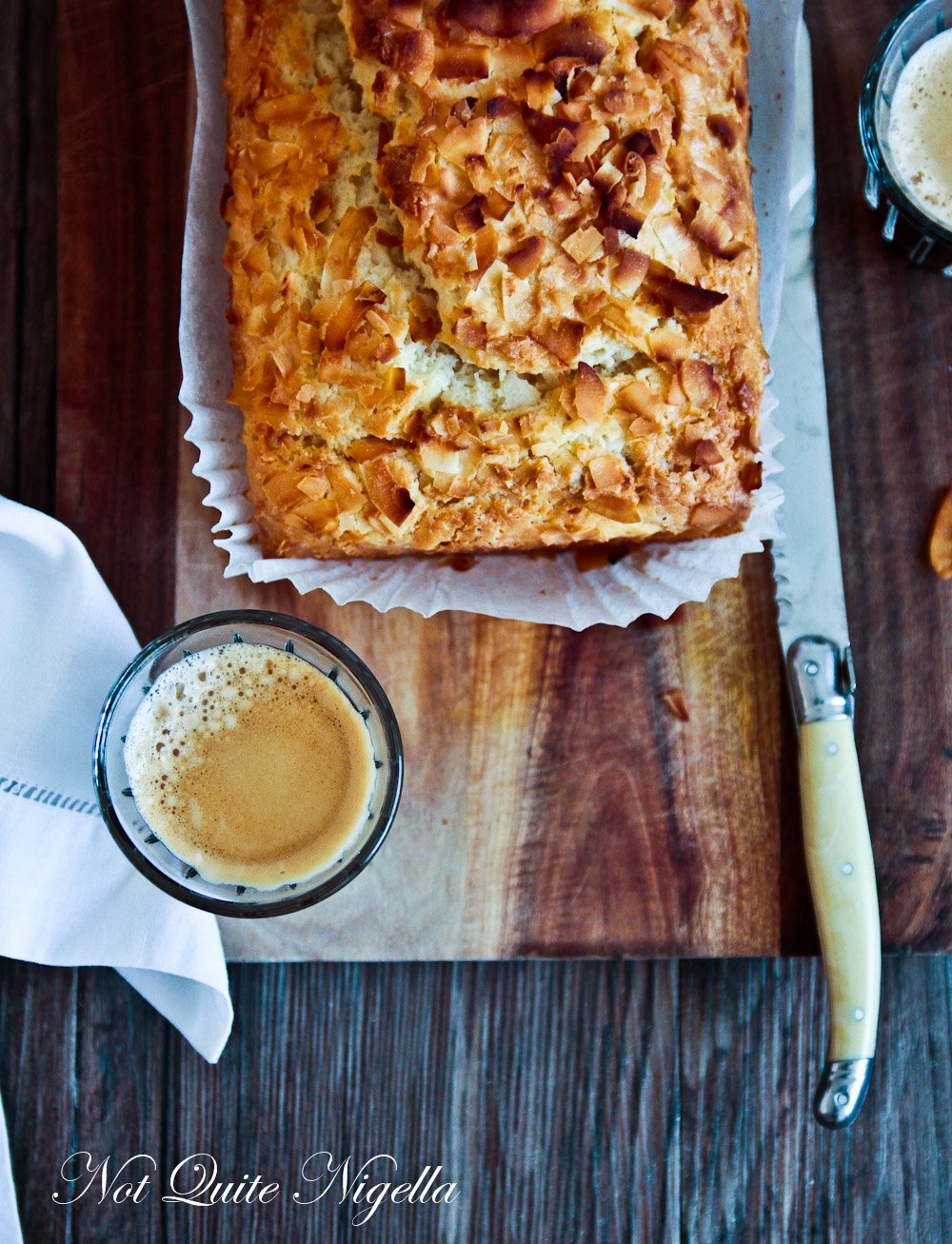 Toasting banana or coconut bread seems to be something that is done in regional areas of Australia which I know sounds odd but I don't see it much in the city (and by all means correct me if I am wrong! :)). Nevertheless it's a genius move and freshens up and gives the dense bread a delicious crispy crust. What I also like about this bread is that it is easy and is made dairy free by the use of coconut milk instead of milk or buttermilk.

So tell me Dear Reader, do you often bring food gifts to friends? Have you ever tried grilled coconut or banana bread before? 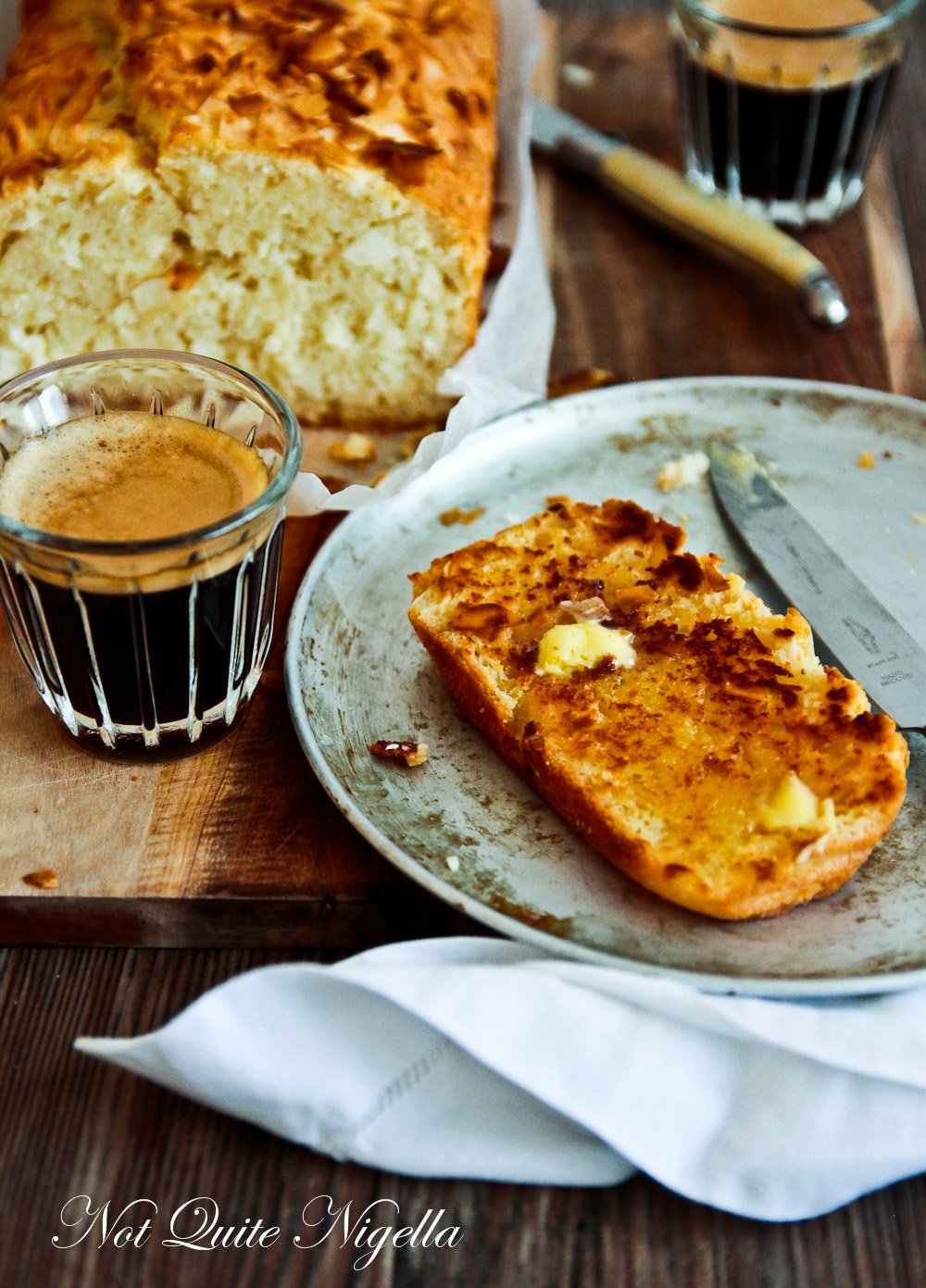 Baking time: 1 hour to bake, 5 minutes to grill or fry

Step 1 - Preheat oven to 180C/350F. Line a loaf tin with baking paper or a liner. In a large bowl, mix the flour, baking powder, flaked coconut and sugar until combined. In a jug whisk the coconut milk, lime juice and zest, coconut essence, vanilla extract, oil and eggs. Make a well in the dry ingredients and mix together until just combined. Scoop into the prepared tin and sprinkle with extra coconut flakes and bake for 1 hour until a skewer inserted in the centre comes out clean. 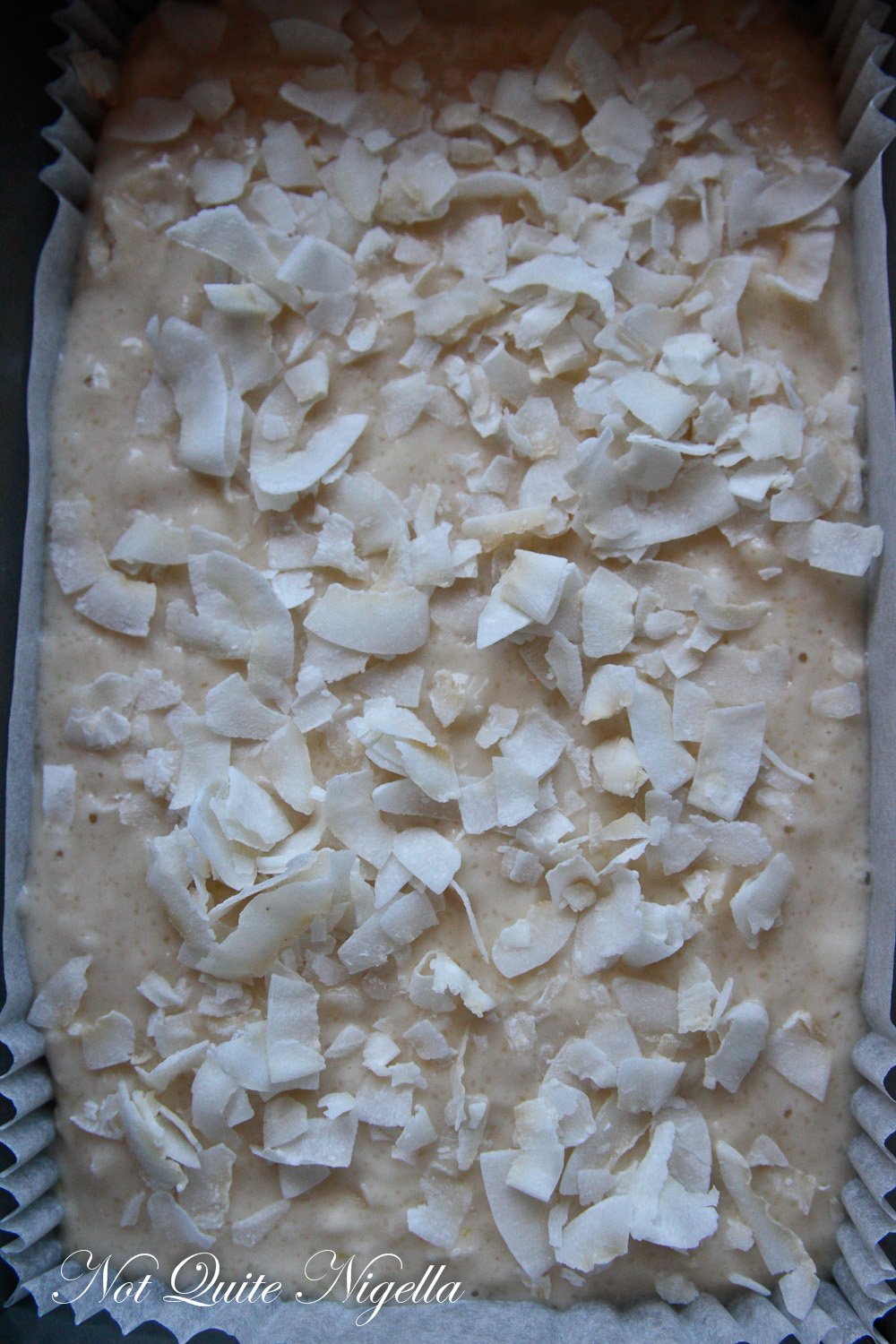 Step 2 - To serve, slice and then grill or pan fry and serve with butter. 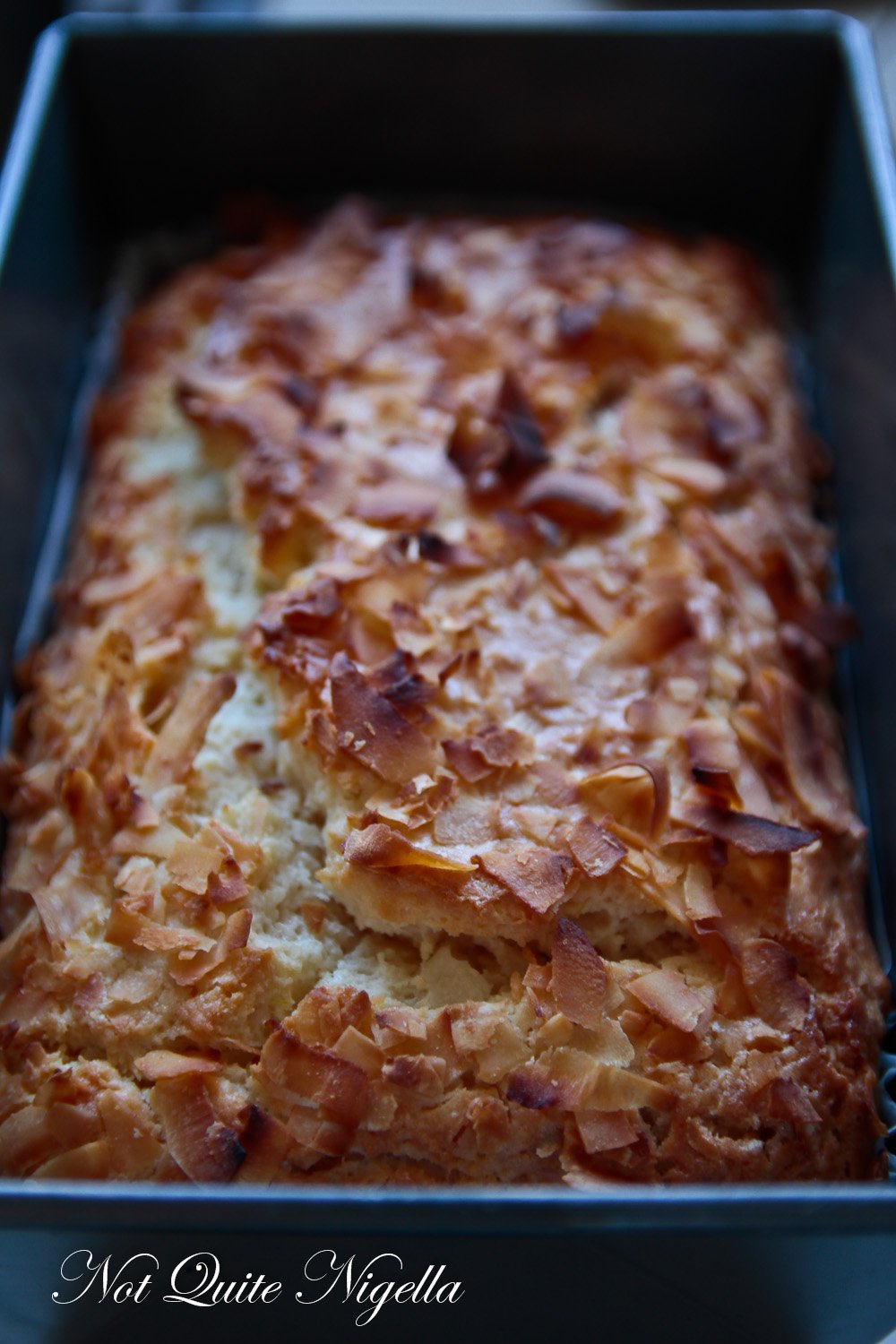