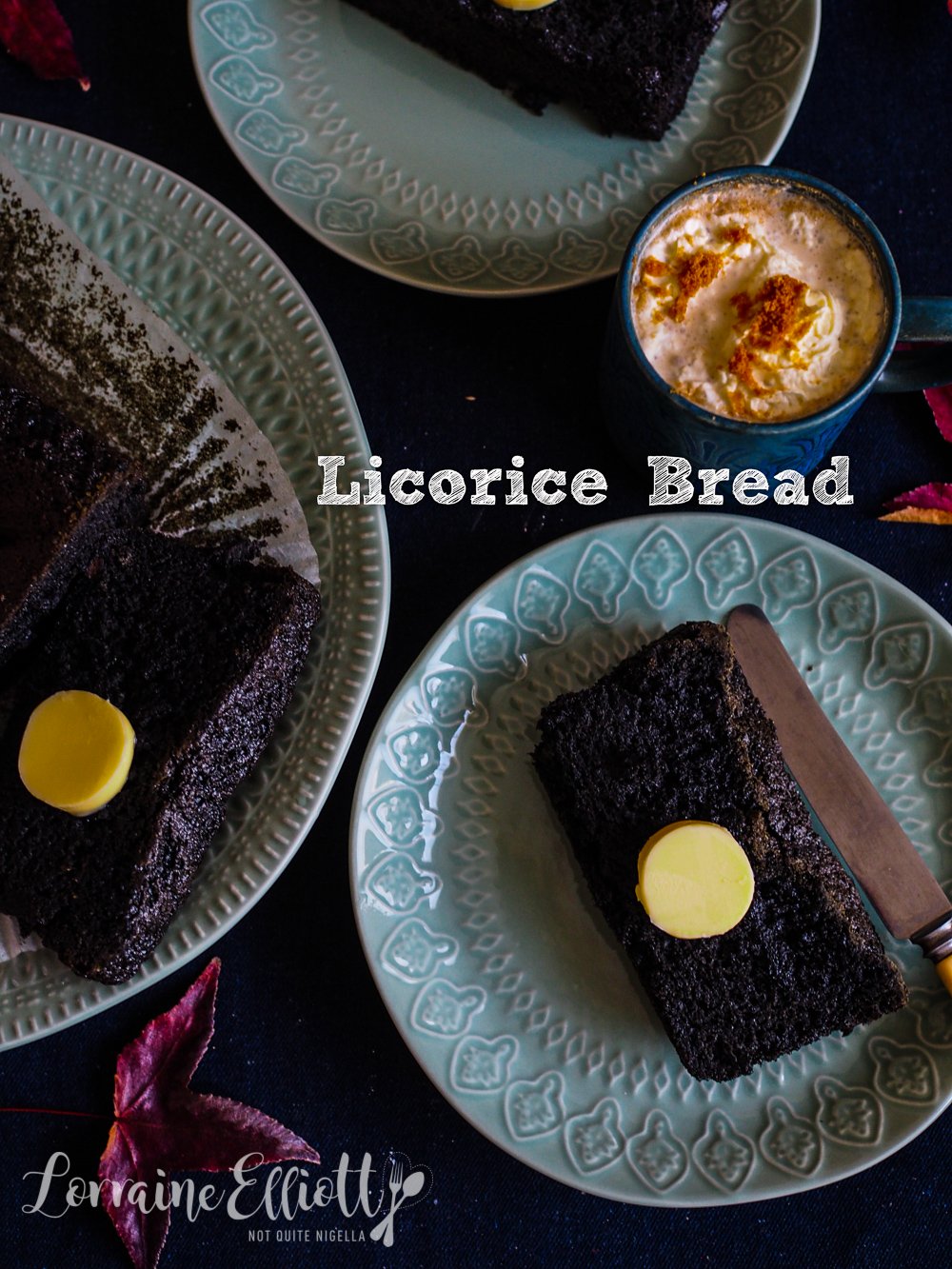 Darker than the night, this licorice bread has a bit of a cult following. This bread is simply stunning and made with actual licorice in it. And if you're a licorice lover, I'm willing to bet that you'll be utterly smitten with this bread! And this is a pushy recipe for licorice lovers!

Now that I've done the hard sell I will admit that I do like licorice now. And once I tried this bread I could not stop thinking about it. If I could have bought an entire loaf that day I would have. This liquorice bread is like a licorice version of banana bread (rather than say a sourdough bread loaf) and I tried it at the wonderful Kickaboom cafe in Glenbrook in the Blue Mountains. I got the loveliest message from Alisha, one half of the couple that own Kickaboom. She said that she had been cooking from Not Quite Nigella for years!

So I asked Alisha if it were possible to have the recipe and she was kind enough to give me their recipe for it, inspired by the liquorice bread from Yellow. It's super easy to make and produces the most incredible bread. All it needs is a spread of butter (cultured is best for the lovely tang). 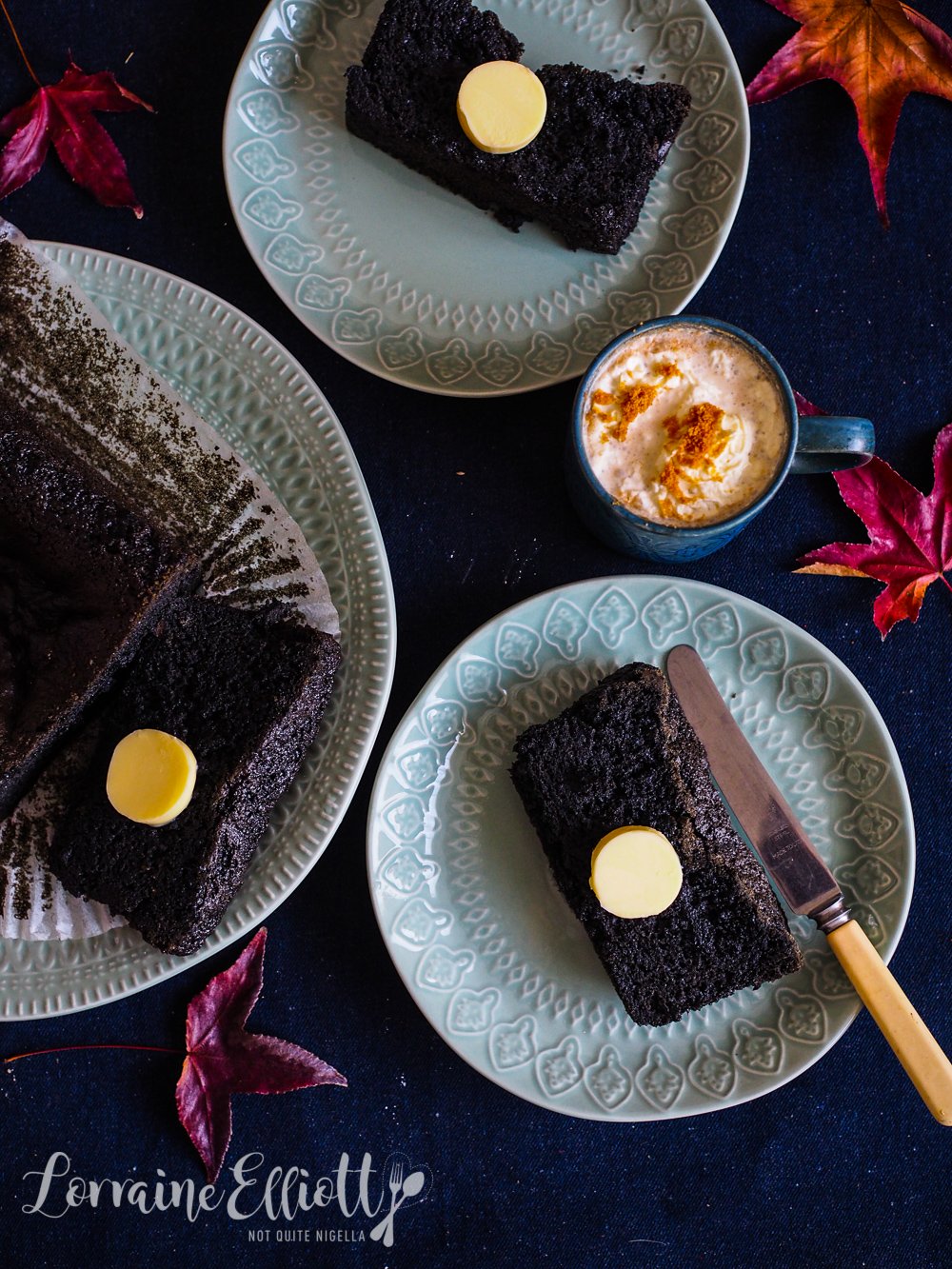 Speaking of being obsessed with food, Miss Mochi like her mummy, is rather obsessed with food. Her life revolves around guarding me and obtaining food. She gets so excited around food that she is not allowed in the kitchen and observes that restriction remarkably well. But then Mr NQN let me in on a little secret. He told me that when I go and have a shower, she checks that the water is running and runs straight into the kitchen to sniff around for food! She potters around there for a few minutes before standing guard outside the bathroom for me pretending like she has not been naughty at all. I can't even get mad because she's just like her mama and just loves being breaking rules and being naughty.

We recently left her with a dog sitters when we went away for a few days. We like leaving her with this sitter as she already has three small dogs and we like her to socialise although they're quite vocal dogs and I guess it can be quite intimidating being part of an already established family unit.

But we needn't have worried about little Mochi. We got a little message from the dog sitter. "She was super hungry this morning and she took some of the other dogs food haha," she said. Gone is the timid little dog that we adopted and in her place is a confident, food obsessed girl!

So tell me Dear Reader, do you ever try something and then can't stop thinking about it? Do you ever ask a chef or an eatery for recipes? And are you a licorice lover or loather? 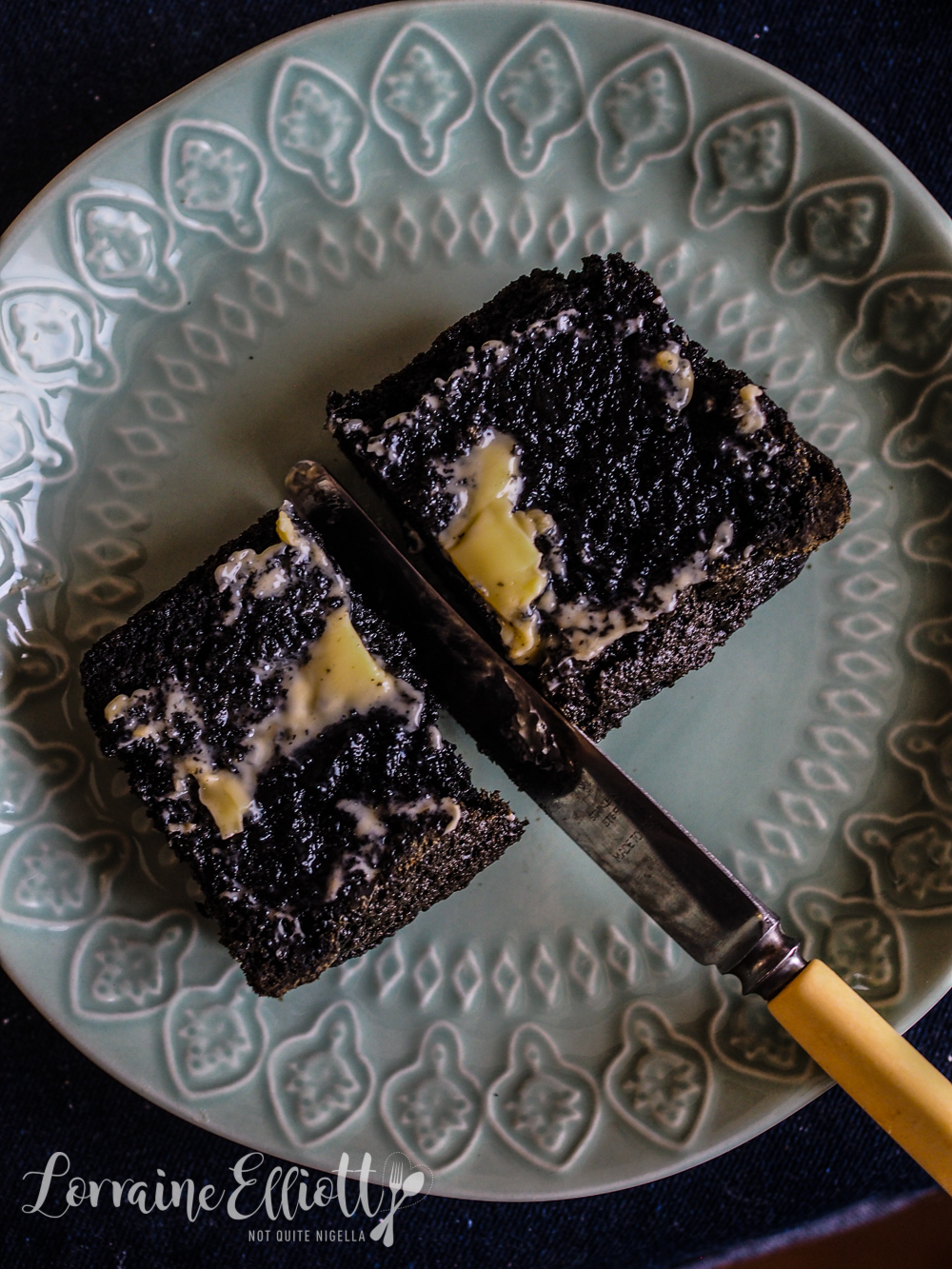 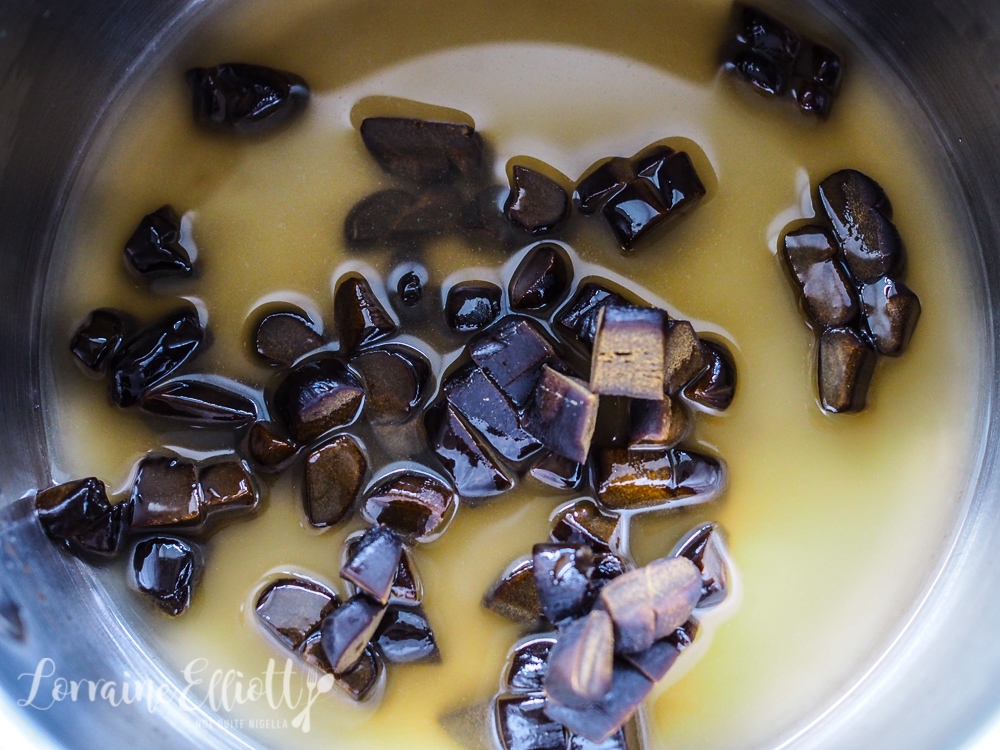 Step 1 - Make the liquorice puree. Combine liquorice and water in a saucepan, bring to a simmer and cook until liquorice is soft (about 10 mins). Blend to a smooth-ish puree and allow to cool (Mr NQN loved it when he got tiny pieces of licorice so you don't need to make it super smooth). 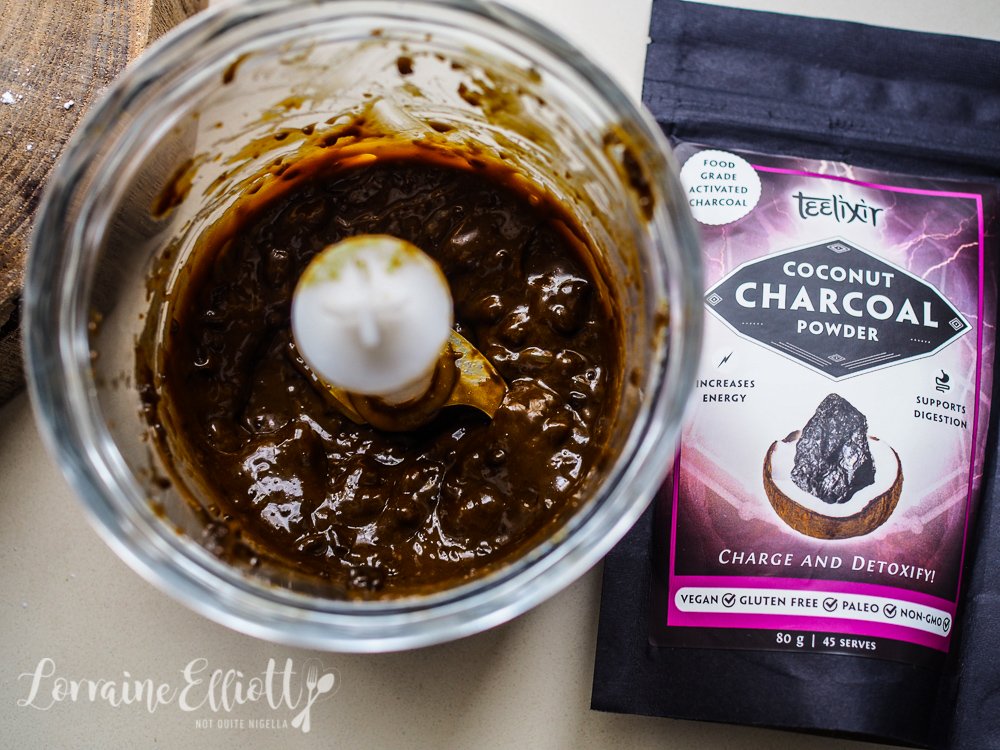 Step 2 - Preheat oven to 160C/320F and line a loaf tin with parchment on the base and sides. Beat eggs and caster and brown sugars together until combined. Beat in golden syrup, vegetable oil, liquorice puree and charcoal powder. Once all combined, finally add the flour and mix until just combined. Pour into a loaf tin and bake for 70 mins or until the centre springs back when touched. The middle may sink a little but don't worry about it, it's a bit temperamental. 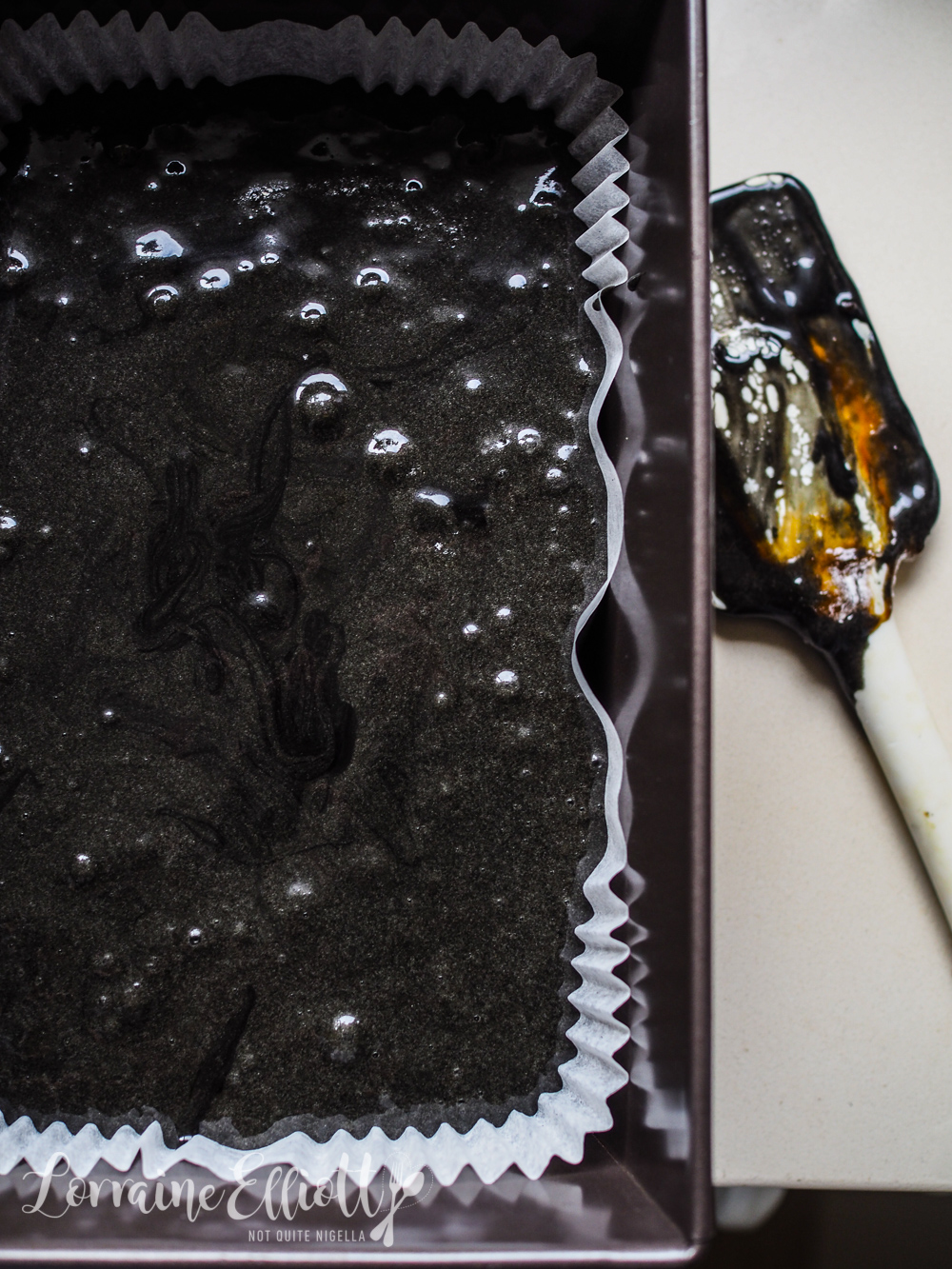