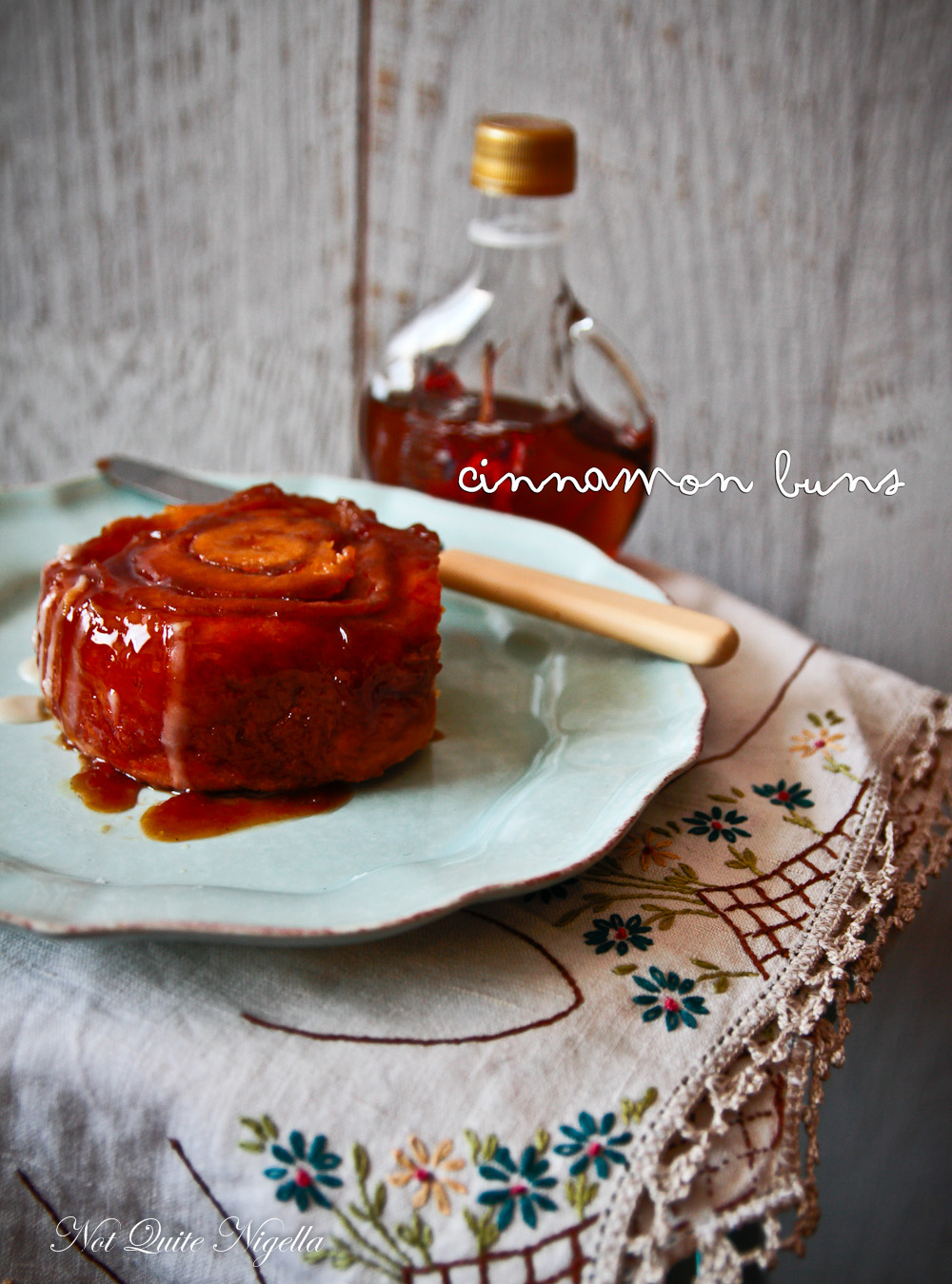 "Atchooo!!!!!" My sneeze flew at Mr NQN as if propelled by a handgun.

"I'm just going to leave you alone I think," he said closing the door behind him. I was sick with the dreaded flu that seems to be going around at the moment. I was too sick to protest and of course I didn't want him to get sick.

Mr NQN brought me a freshly squeezed orange juice that I gulped down hungrily. "Mmm whed did oranges taste dis good?" I said through a blocked up nose. I fell asleep in my thick robe and woke up the next morning sweating and dishevelled still in the robe, one sock hanging onto my foot with the other tossed off. My mouth was parched and all I could say was "Cinnamon buns...".

I had the best intentions to stay in bed and I had a whole season of "Orange is the New Black" and "Keeping up with the Kardashians" to get through. But as always happens, I get bored. Booooored to be specific. So while wearing my enormous robe and feeling like the size of the Titanic, I set about making these cinnamon buns. I had mashed potatoes from the night before and decided to add them to the mix-a friend had reminded me of how good mashed potato in bread is. 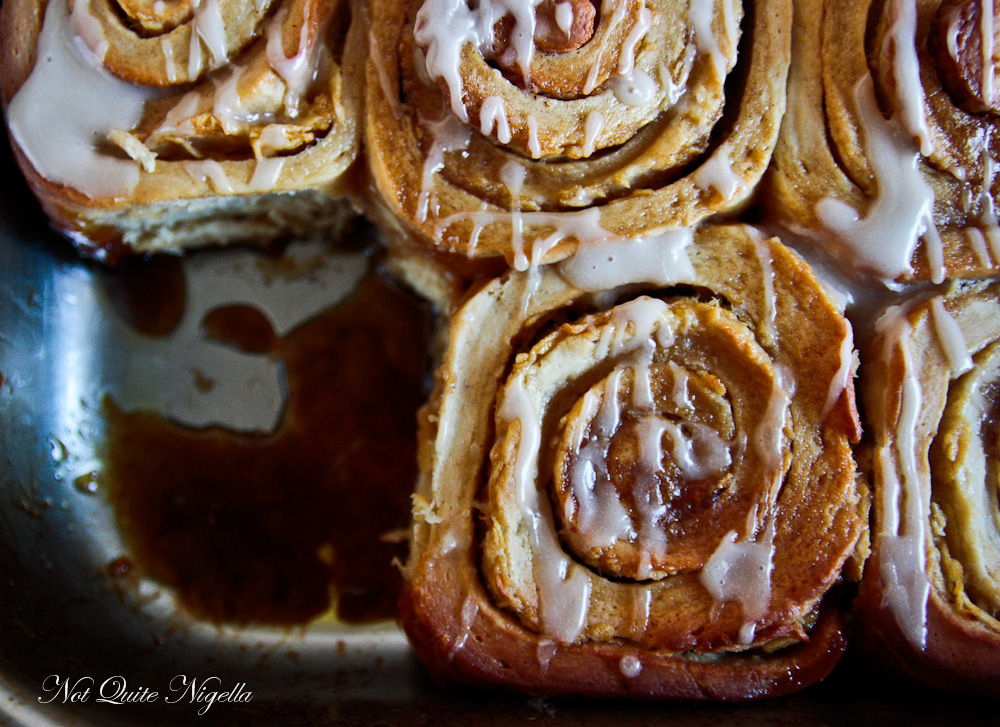 Perhaps it was my delirious state while I was mixing everything but I started thinking of lots of disparate things:

"Is Kim Kardashian's bottom real?" that segued into...

"Why don't I put some caramel sauce on the bottom of these buns?" which then segued into...

"Browned butter! That's it! That's my secret ingredient!" followed by a delirious cackle. This segued into...

"Oh looky here, an apple that I forgot about it, I'm going to use it!"

And somehow, in my fugue state, these became the best ever cinnamon buns. The potato adds such a wonderful texture to the buns giving them a thin delicious crust and a soft, downy inside. The caramel sauce adds a delicious surprise at the bottom of the bun while the top has a drizzle of maple icing and the browned butter adds an other worldly aroma to these buns. So much so that the recently self proclaimed "gluten free" eating Mr NQN asked for two of them. I know they're a bit more trouble than your regular cinnamon bun but I promise that these are worth it if you are a cinnamon bun fan. This is one of those pushy recipes that I urge you to make.

Now if you'll excuse me, there's a monkey that's running about my apartment and he isn't wearing a nappy. Perhaps I'd better go to bed...

So tell me Dear Reader, is Kim K's bottom real? No really, is it? What shows are you into lately that you can recommend to me since I've exhausted my whole stash? And do you get a bit delirious when you're sick? 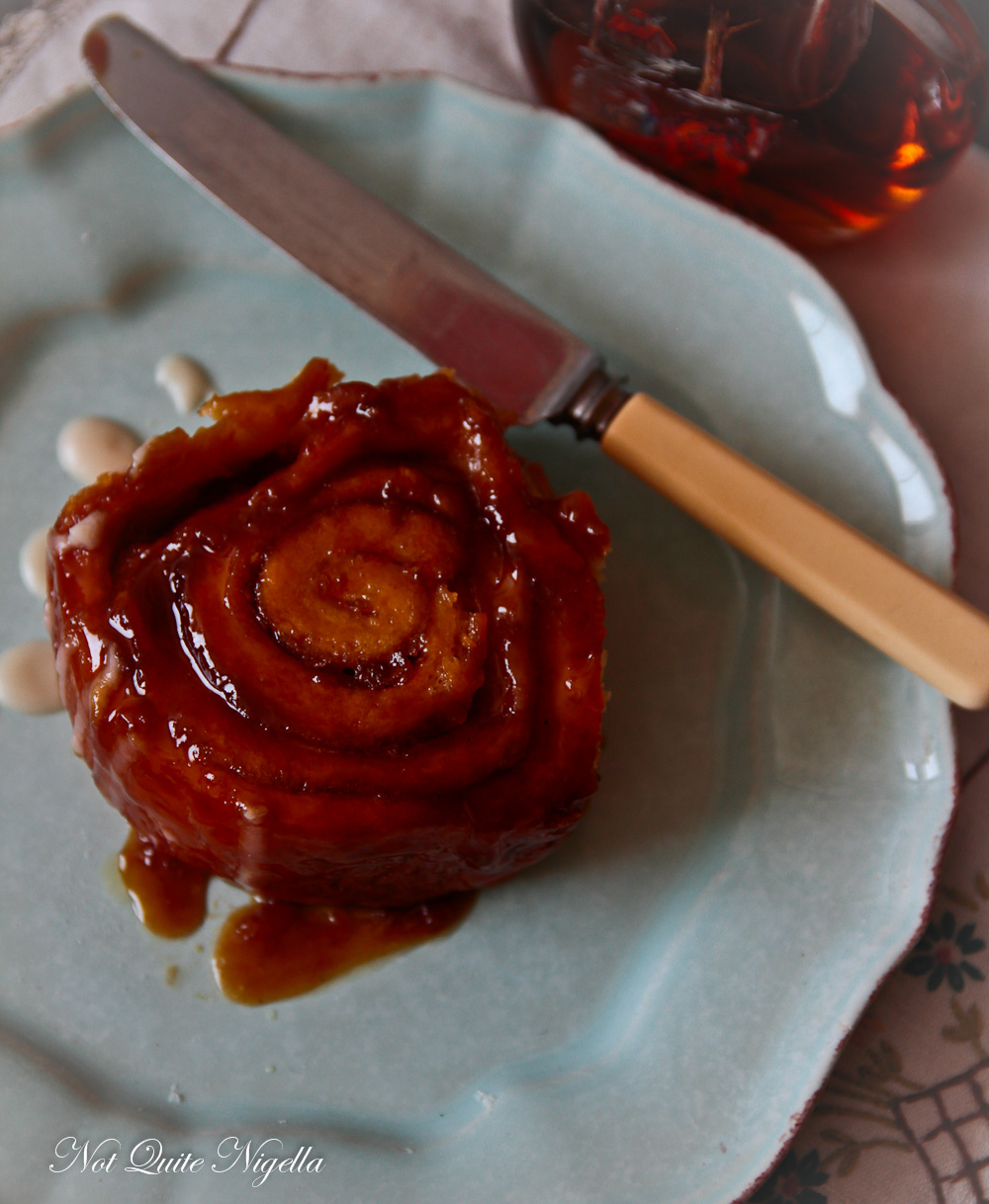 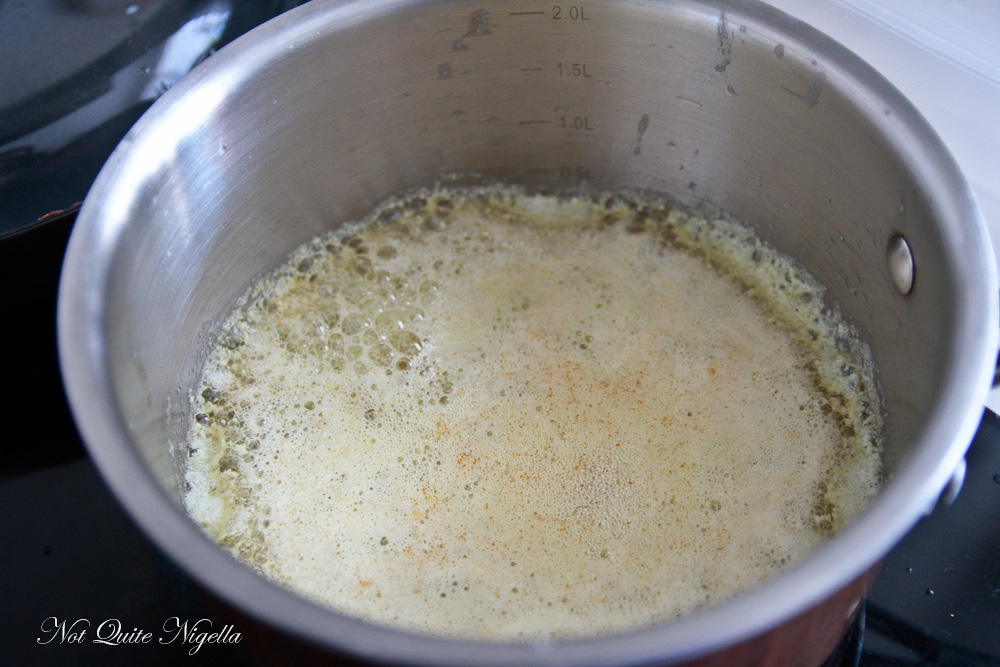 Step 1 - Brown the butter-you actually need 3/4 of a cup (or 180g/6ozs) in total so it's easier to do it all at once. Melt the butter on medium to high until it starts to bubble, take on a nutty smell and turn brown. As soon as it starts to brown remove it from the stovetop (cooking the butter for too long makes black butter which isn't good). Allow to cool while you get on with the rest.

Step 2 - Heat the milk until lukewarm temperature and add the sugar and stir. Sprinkle the yeast over the top of the sugared milk and cover with cling film for 5-10 minutes. Allow it to bubble and froth. 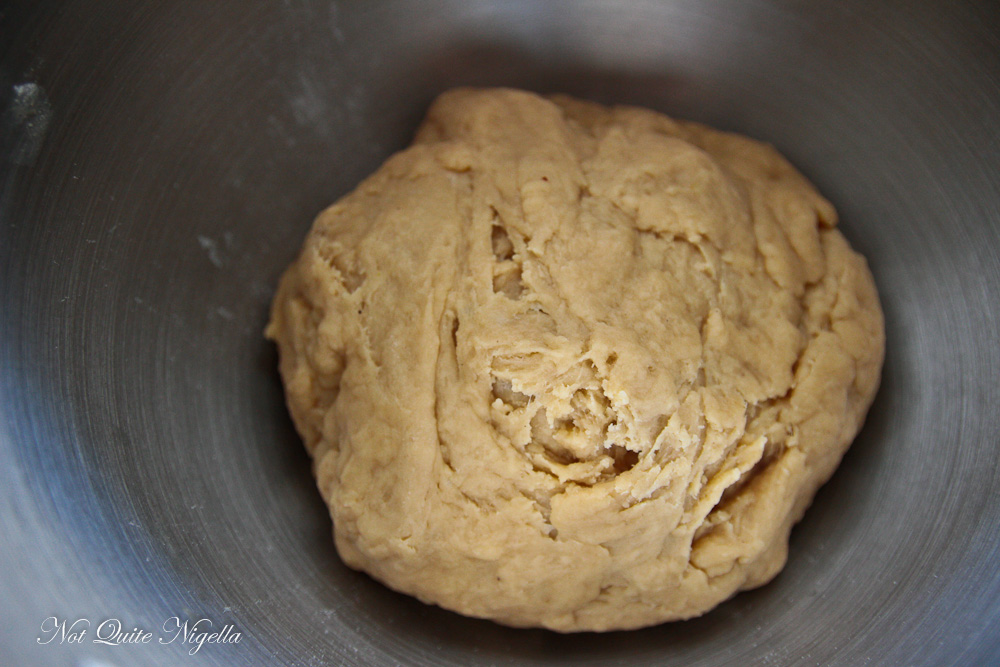 Step 3 - Mix the mashed potato, potato water, 1/2 cup of the browned butter (reserve 1/4 cup of browned butter for the filling), brown sugar, salt, egg and yeast mixture into the bowl of a mixer fitted with a dough hook and knead with 1 cup of the flour. Add the remaining flour-you may not need all of it - I had about 1/8 of a cup leftover. Shape into a ball and place back in the bowl and cover with cling film. Allow to rise for an hour in a warm place until doubled in size (I sometimes put it in my oven set at 35C/95F when it's really cold outside).

Step 4 - While it is rising, make the caramel. Heat the butter until melted and then add the brown sugar and whisk until you get a caramel. Spray a rectangular tray with non stick spray and pour the caramel in the bottom. To make the cinnamon filling, mix the two sugars and the cinnamon in a small bowl and set aside. 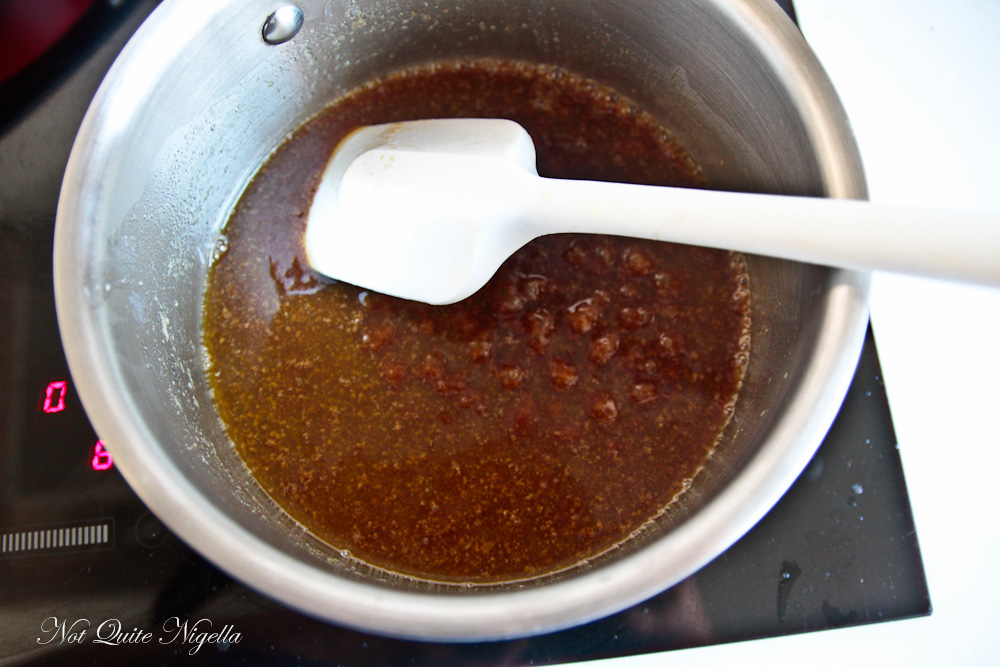 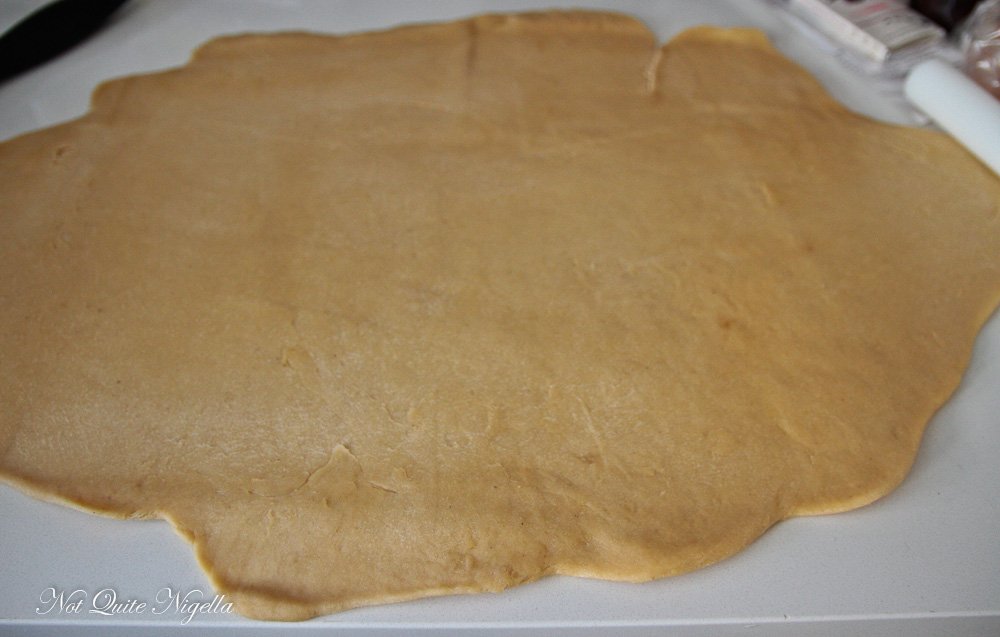 Step 5 - Punch down the dough and roll it out as thin as you can. Brush the browned butter on the surface and then sprinkle the dough with the cinnamon sugar. Grate the apples on top. Roll up the dough from the shortest end to make one large log. Cut into 12 pieces and place on the caramel lined tray. Allow to rise for 45 minutes in a warm place. 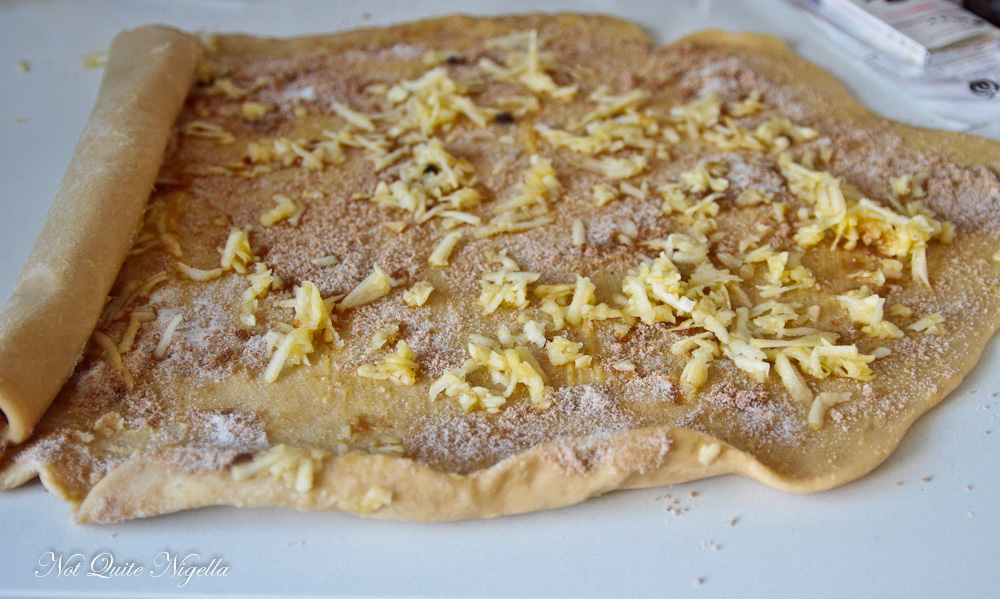 Step 6 - Preheat oven to 190C/374F. Bake for 25-30 minutes. When cooling, mix the two glaze ingredients together and drizzle over the top of the buns. Serve warm and don't forget to upturn them! 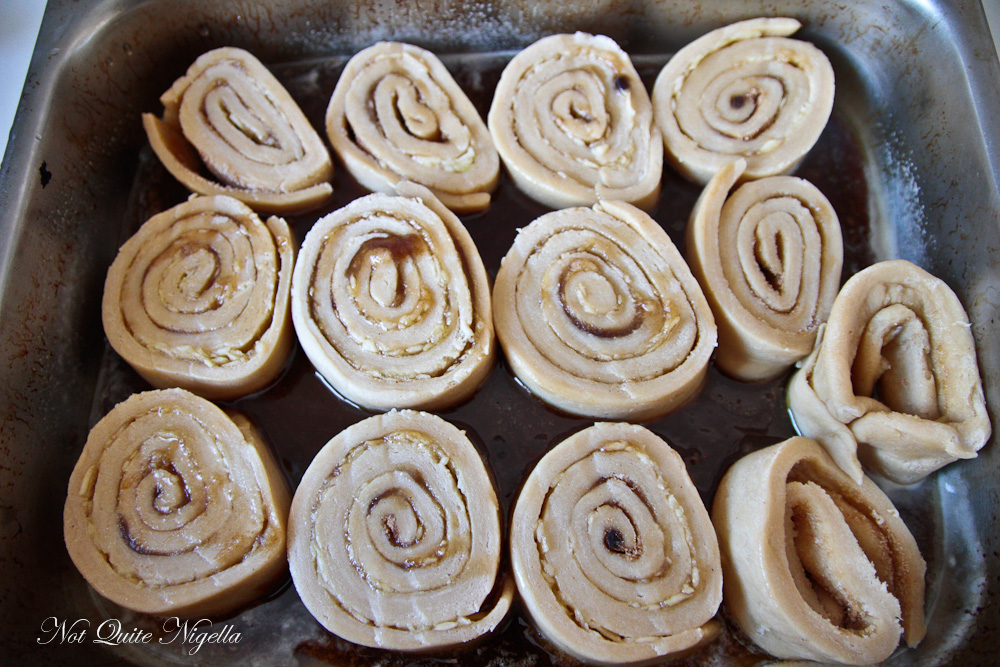