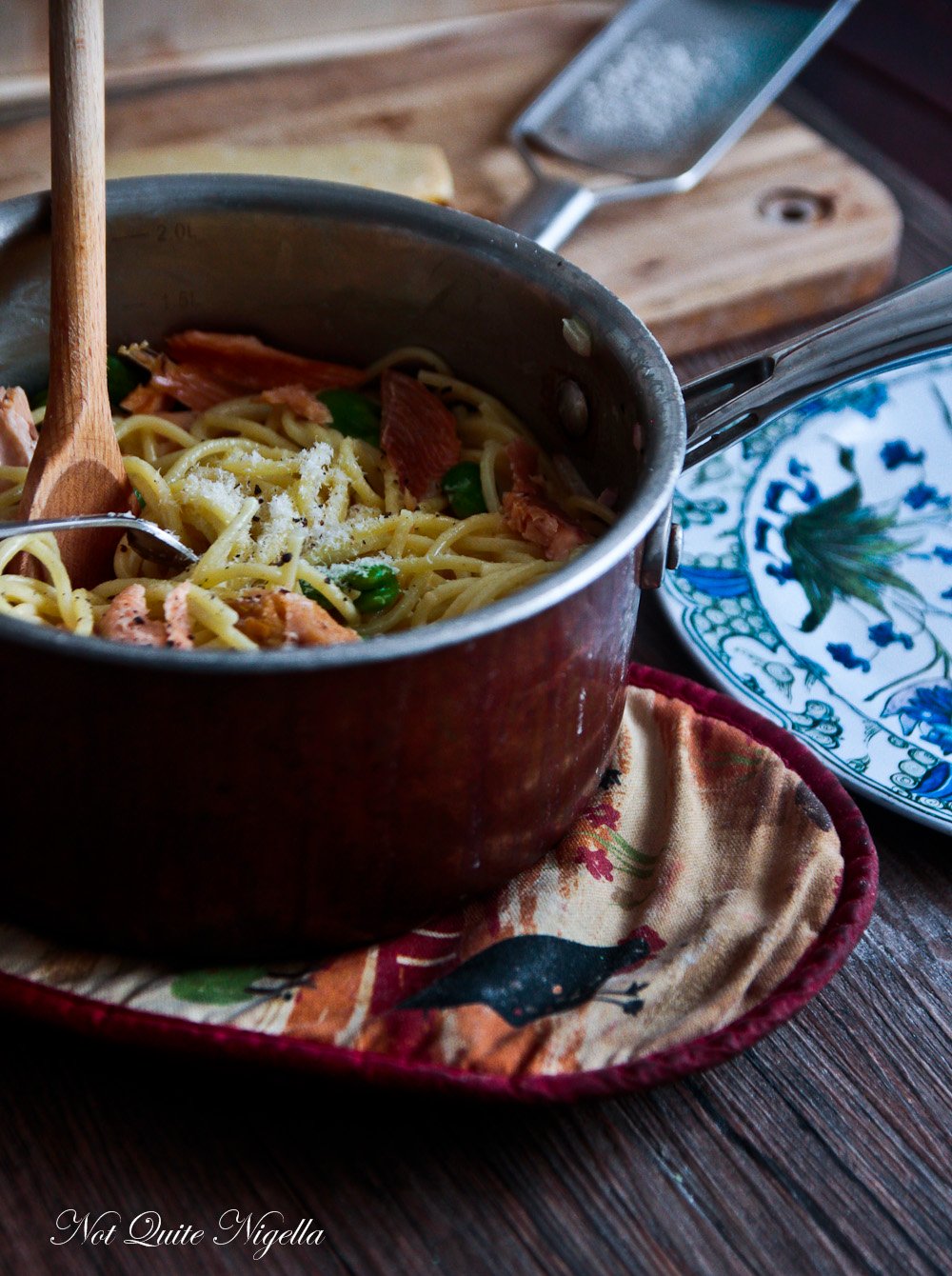 I recently had a conversation with Mr NQN that went like this:

Me: This apple tastes terrible.

Mr NQN: What's wrong with it?

I tried to eat healthily but alas, it just wasn't me. I've often written about our opposite tastes, we are really from the nursery rhyme Jack Sprat and his wife (Jack Sprat could eat no fat, his wife could eat no lean). Mr NQN shuns marrow and cakes while I could happily subsist on both. Even pasta is contentious. He loves spirals while I adore spaghetti. But since I make the food, I get to make the decisions on what shape of pasta we eat. He calls that bossy. I call it "Make the damn food and then we can talk." :P 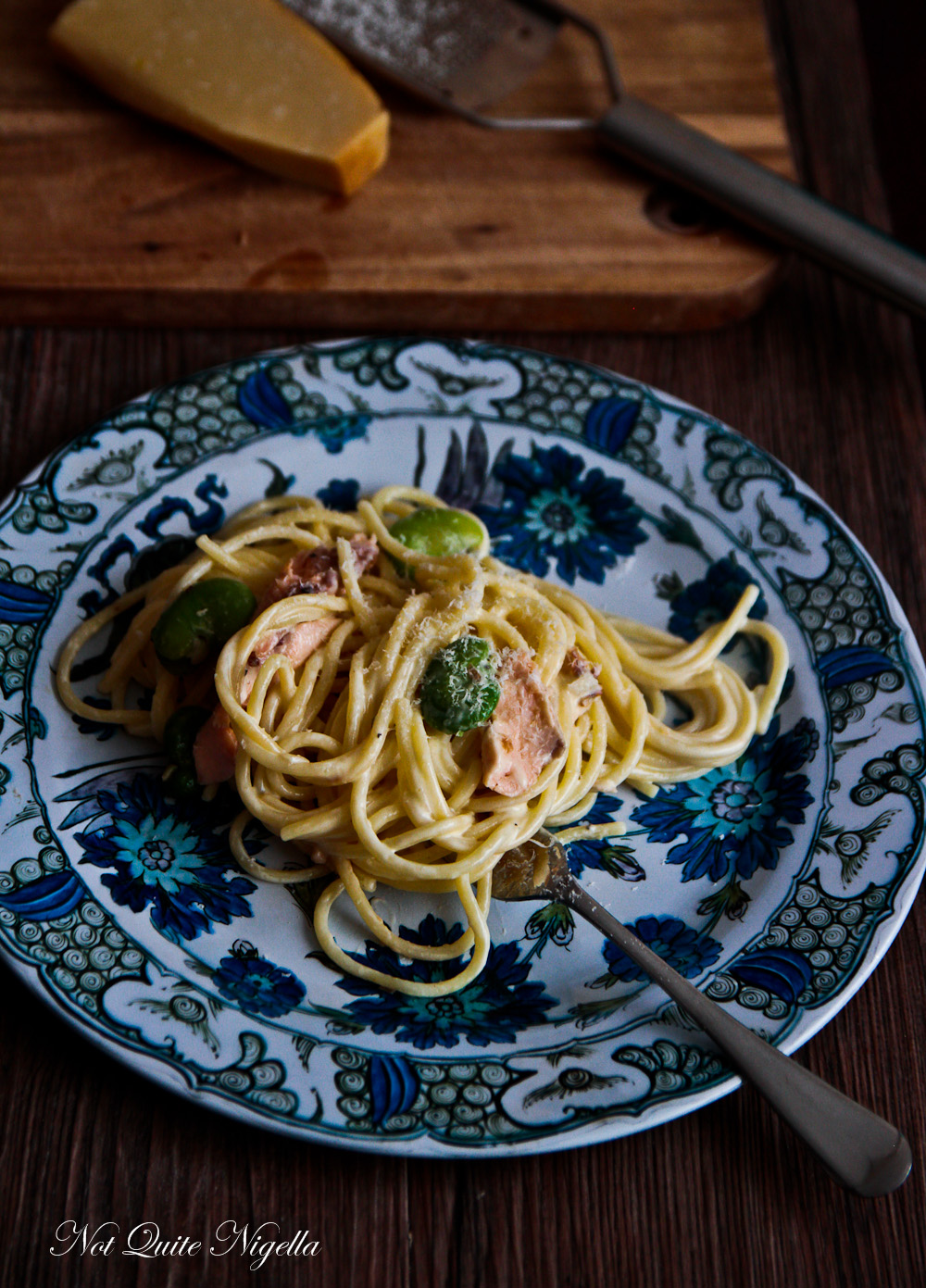 Despite this, he still loved this dish. It was one of those post market day dishes (oh how I love those days!) where I had fresh bought smoked trout and broad beans. The rest of the items were standbys that are always in the pantry or fridge.

Having recently come back from Italy, I realised that pasta is fabulous when it is simple. I had some of the best pasta that I've ever eaten and when they gave me the recipes, I was astounded at how simple the dishes were-some with only three ingredients (I'll share these soon). But in the meantime, give this dish a try. I honestly didn't expect to blog about this because it was so simple which is why there are no process photos. It was only when I was sticking my fork into it that I realised that I should definitely share this recipe with you.

The broad beans do take a bit of time to prepare but they're the only "tricky" bit and even then it's not really tricky, more repetitive. But I find doing repetitive tasks soothing when you're trying to think about things. Like ways to get your husband to cook and retorts when he calls you bossy ;)

So tell me Dear Reader, are you more Jack Sprat who can eat no fat or his wife that could eat no lean? And who decides on what you eat at home? 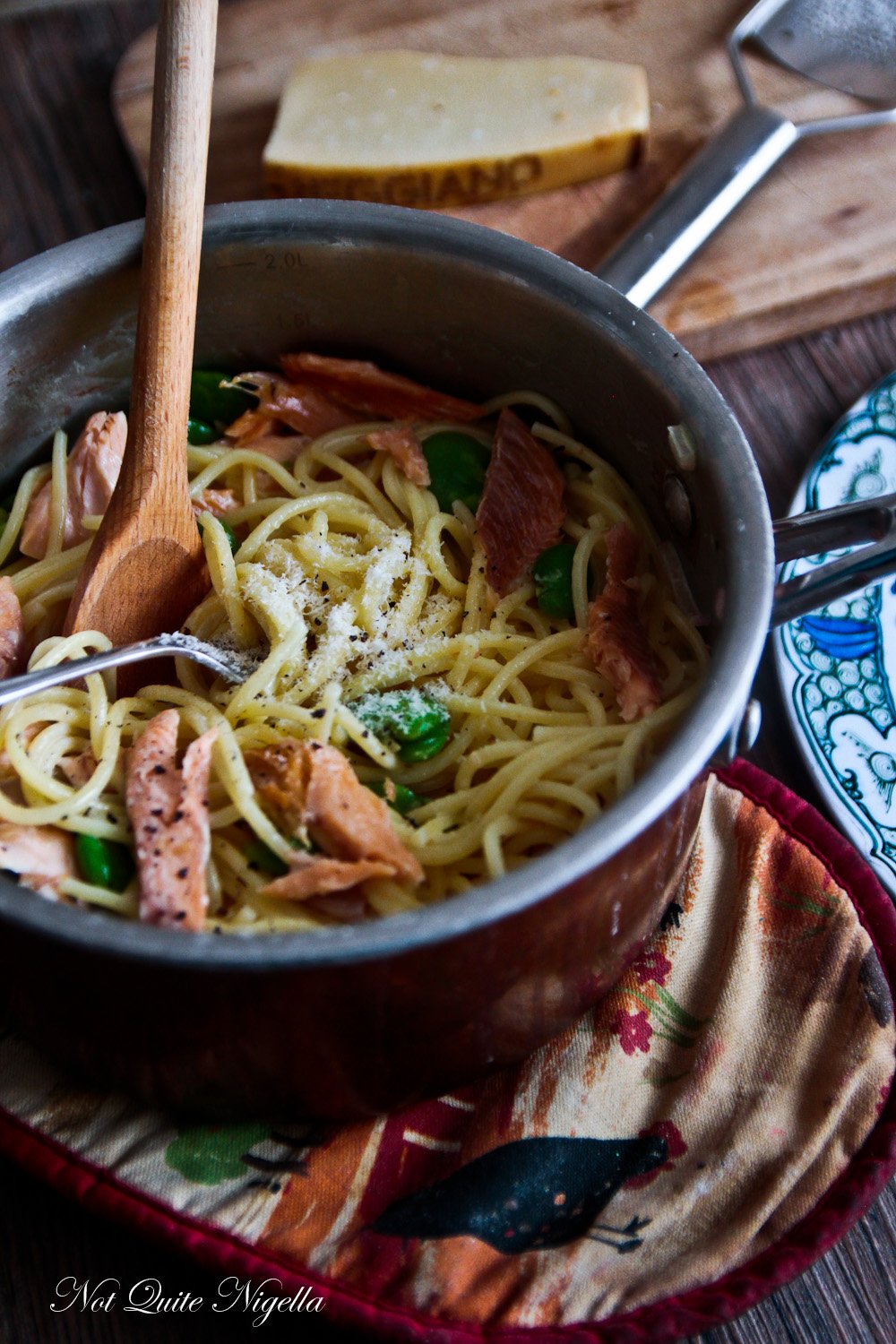 Step 1 - Put the spaghetti on to cook in plenty of salted, boiling water. Meanwhile fillet the trout by cutting off the head and tail. Pull the skin away and pushing away the flesh from the backbone. You should be able to get it in large chunks although don't worry as you will flake the fish anyway.

Step 2 - When the pasta has 3 minutes to go, pop in the broad beans and simmer those for three minutes. When done, drain the spaghetti and beans in a colander under cold water and separate out the beans. Peel the outer layer of skin to reveal a bright green bean inside.

Step 3 - Heat the cream in the saucepan (I used the same one) and add in the thinly sliced onion. When it is boiling, add the spaghetti and add seasoning. Make sure that the spaghetti has been coated with the sauce - if you need more liquid add some pasta water. Add grated cheese, smoked trout and cheese on top.