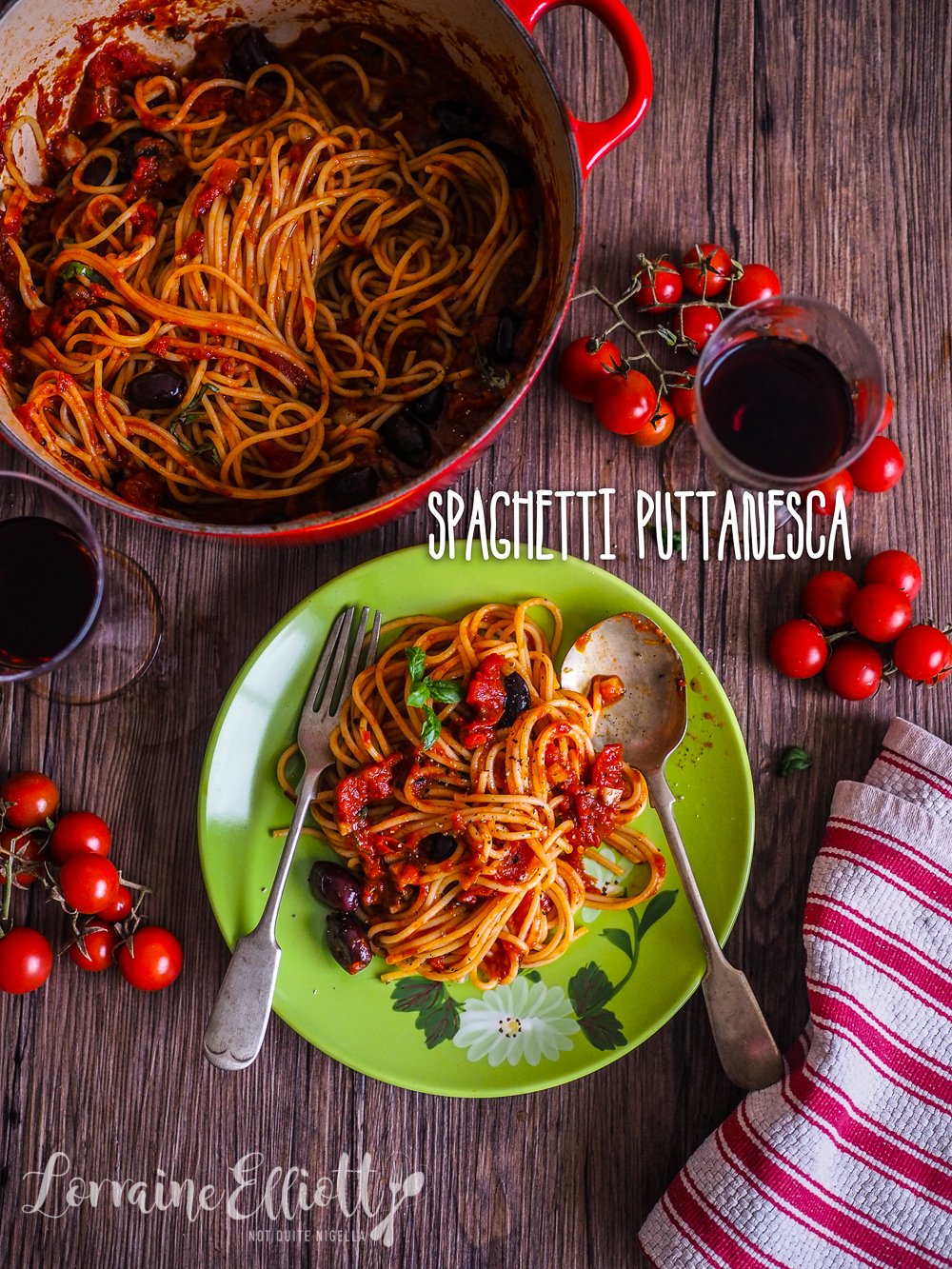 This Pasta Alla Puttanesca (or non slut shaming pasta ;)) is simplicity at its best. It's a flavoursome mix of tomato, anchovies, capers and black olives that give this dish its flavour (and the anchovy-phobic need not worry, they give it saltiness rather than fishiness).

Literally spaghetti alla puttanesca means spaghetti like a whore and is dubbed the prostitute's or sex worker's pasta. It was said to have been invented in Naples around the time of World War II which makes it a relatively recent pasta sauce, comparatively speaking. 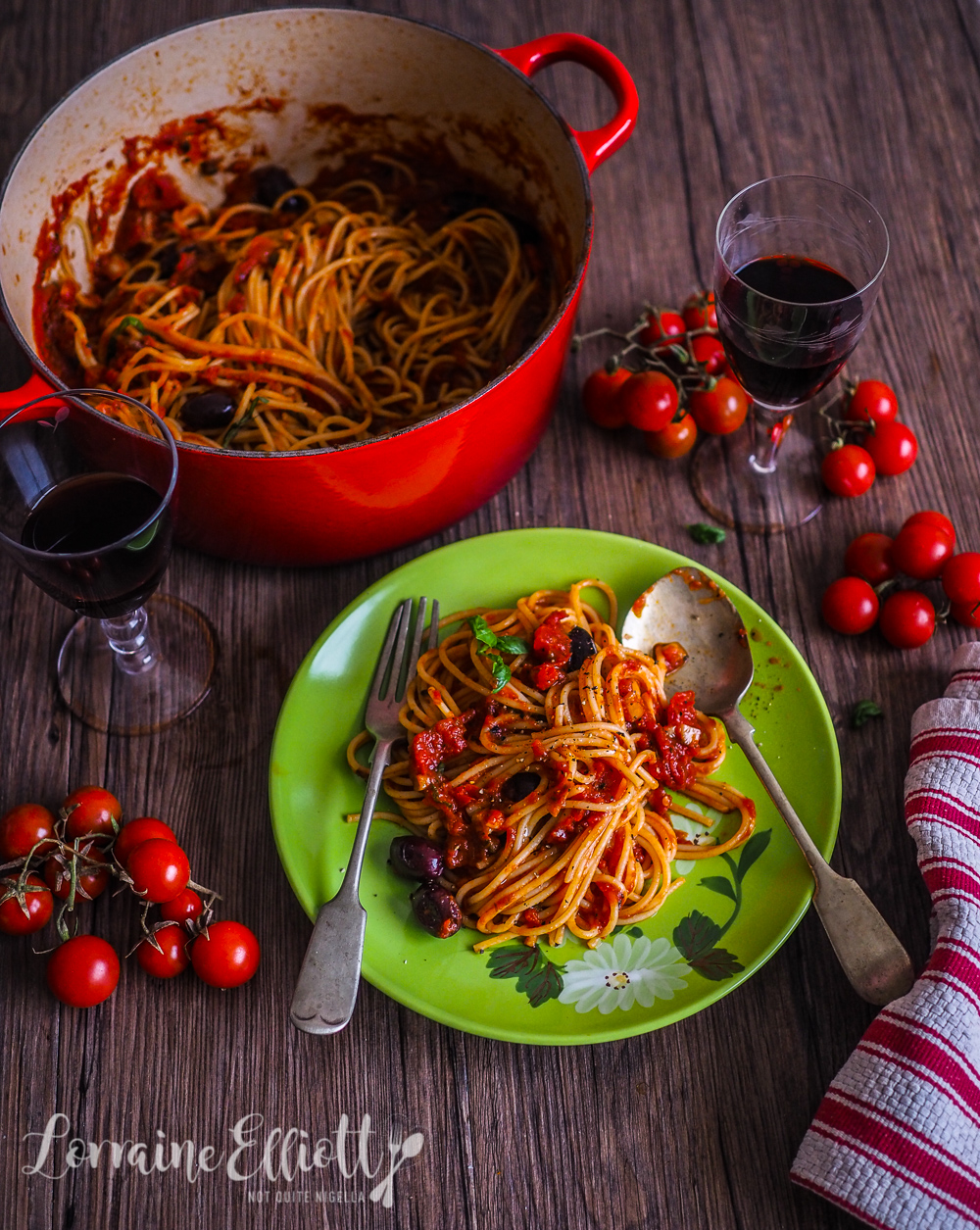 Numerous theories abound, such as they will with such a colourfully named pasta. Some have sex workers cooking pasta quickly between clients, some say that the aromatics lured customers in, some even say that married women cheating on their husbands would make this as this would mean that they would spend less time in the kitchen cooking so they could meet their lover. But they come back to the same theme: it is a ludicrously quick and simple pasta sauce. With simple recipes like this there's no reason to get takeaway. 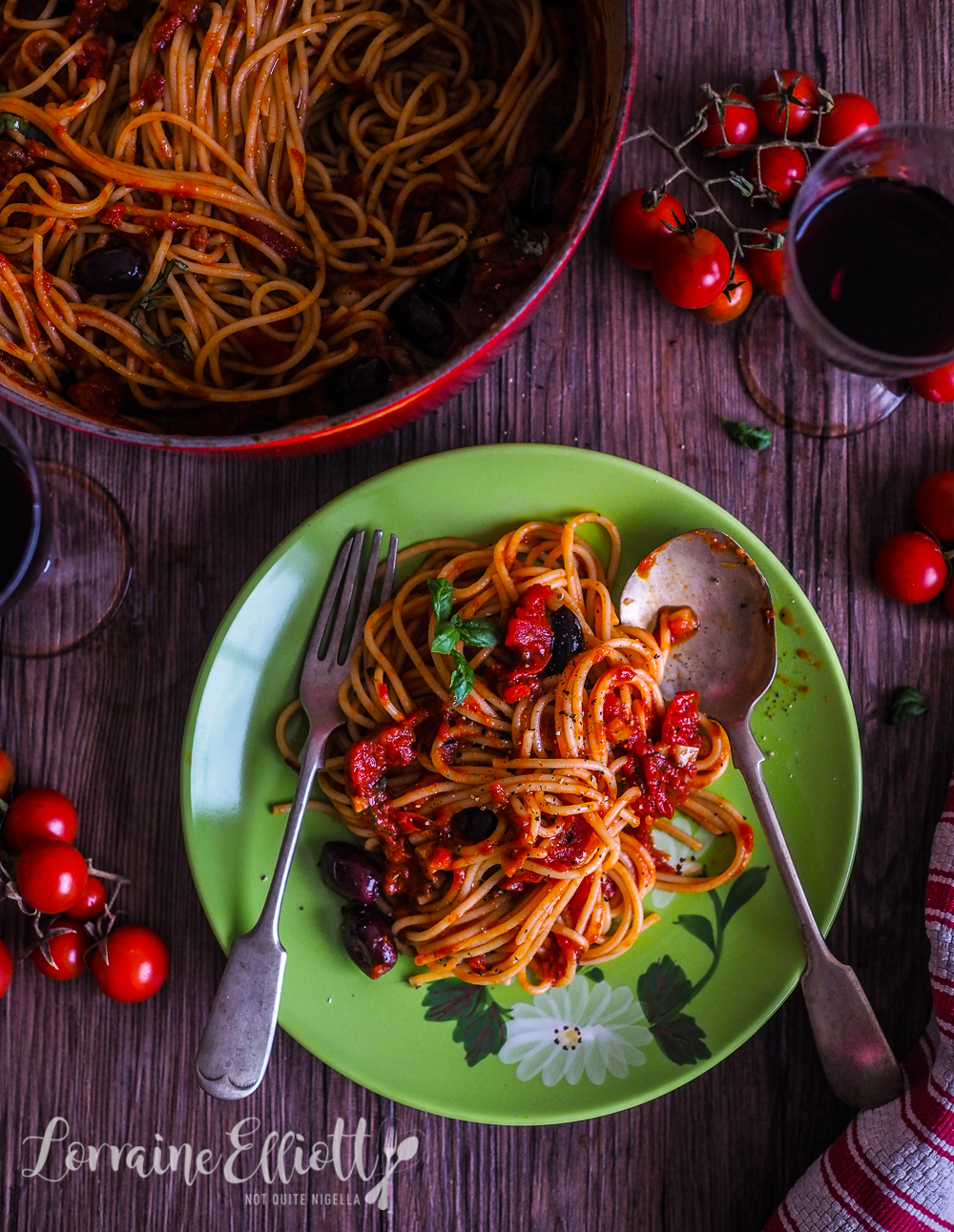 Takeaway is one thing that I don't do a lot of. I seem to veer towards restaurants and cafes or cooking at home. But takeaway to me is something I do very rarely, maybe twice a year. It's usually sushi which I don't tend to make at home and it's never really dishes like pasta.

For me I love the whole dance around restaurants and being out and sitting in a different setting. I'm even starting to visit pubs that have good food more. And even this past very cold winter didn't deter me from going out and I wasn't tempted to get takeaway once. But what about you? 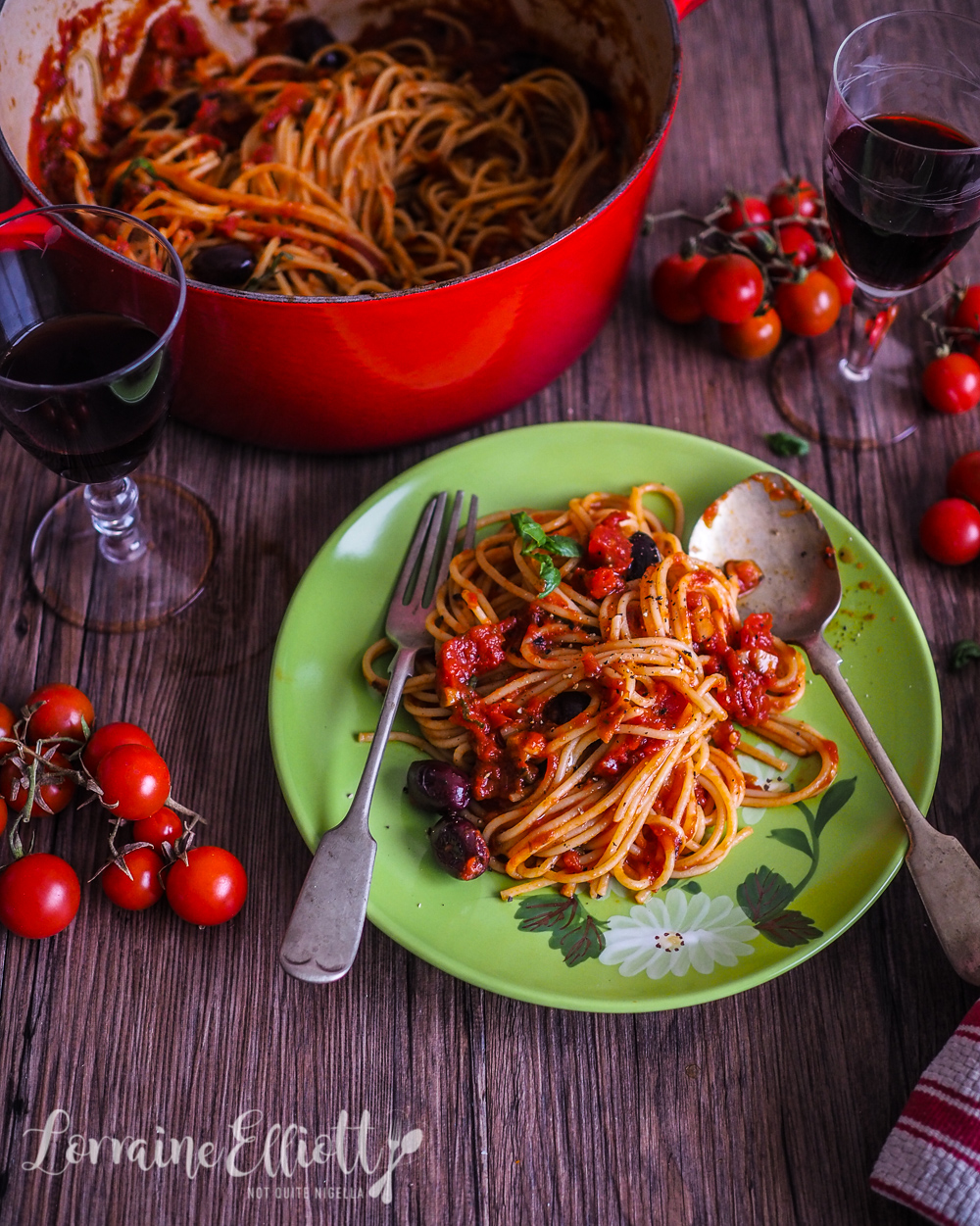 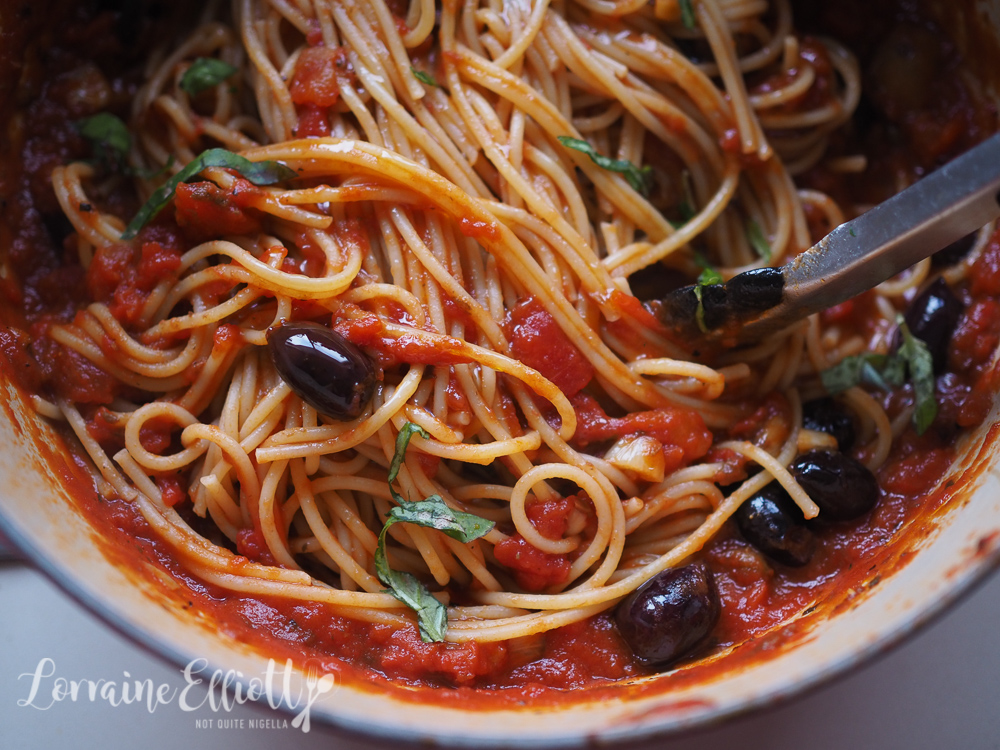 Step 1 - Make the sauce first (you can do this a day or two ahead of time). Heat the oil in a cast iron pot on medium to high heat and add the garlic and anchovies and fry briefly. Add the tomatoes, tomato paste, olives, capers and red pepper flakes and simmer with the lid off for 10-15 minutes or until the sauce has thickened. Taste for seasoning-the anchovies will mean that you don't have to add much salt but if the tomatoes are sour you can add a little sugar but not too much-puttanesca is a salty sauce. 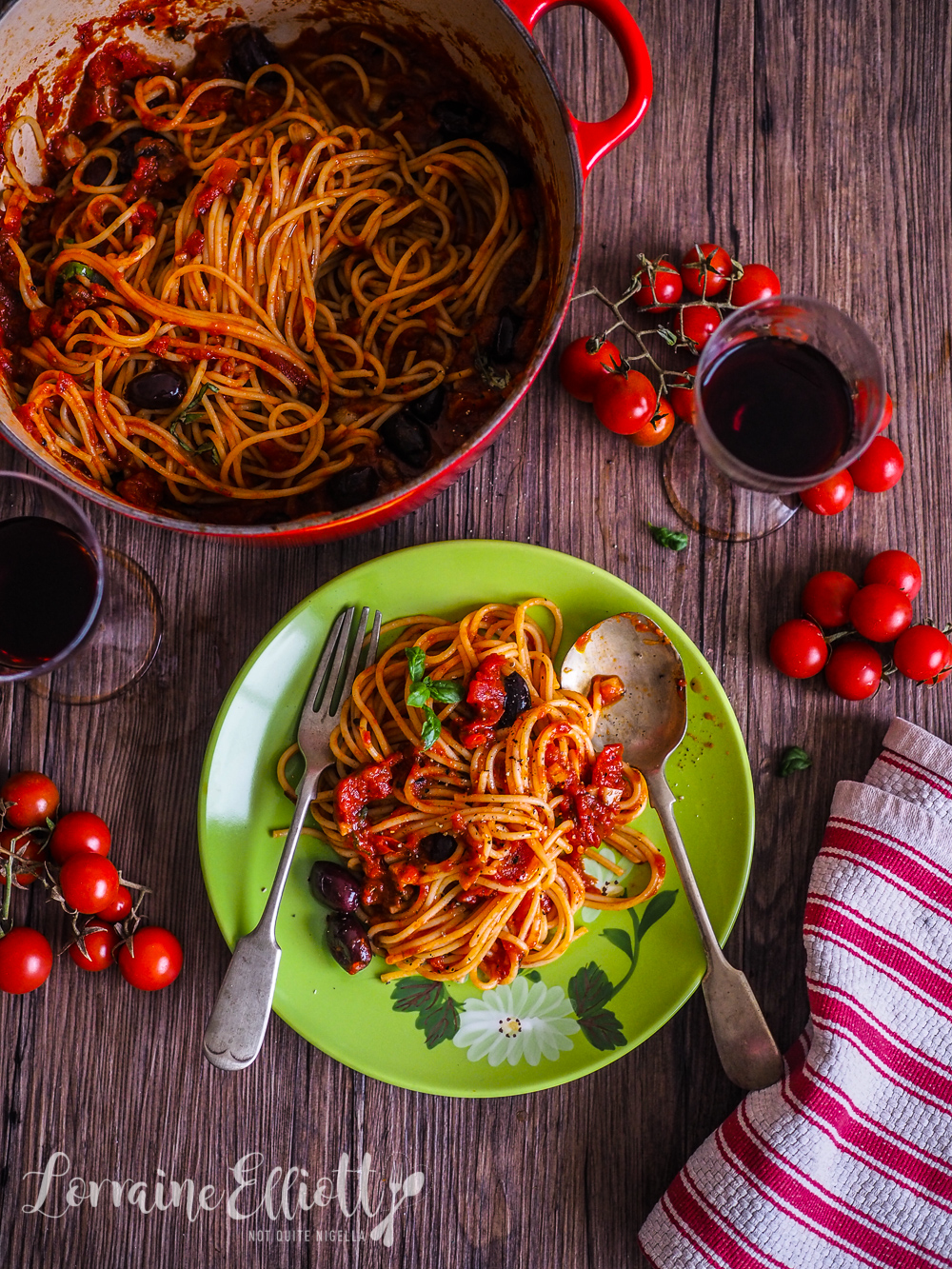 Step 2 - Boil the pasta in plenty of salted water until al dente. Add into the puttanesca sauce and coat the pasta. Serve with fresh herbs on top and cheese if you would like it.