Turducken Wellington - Not As Mad As You Would Think 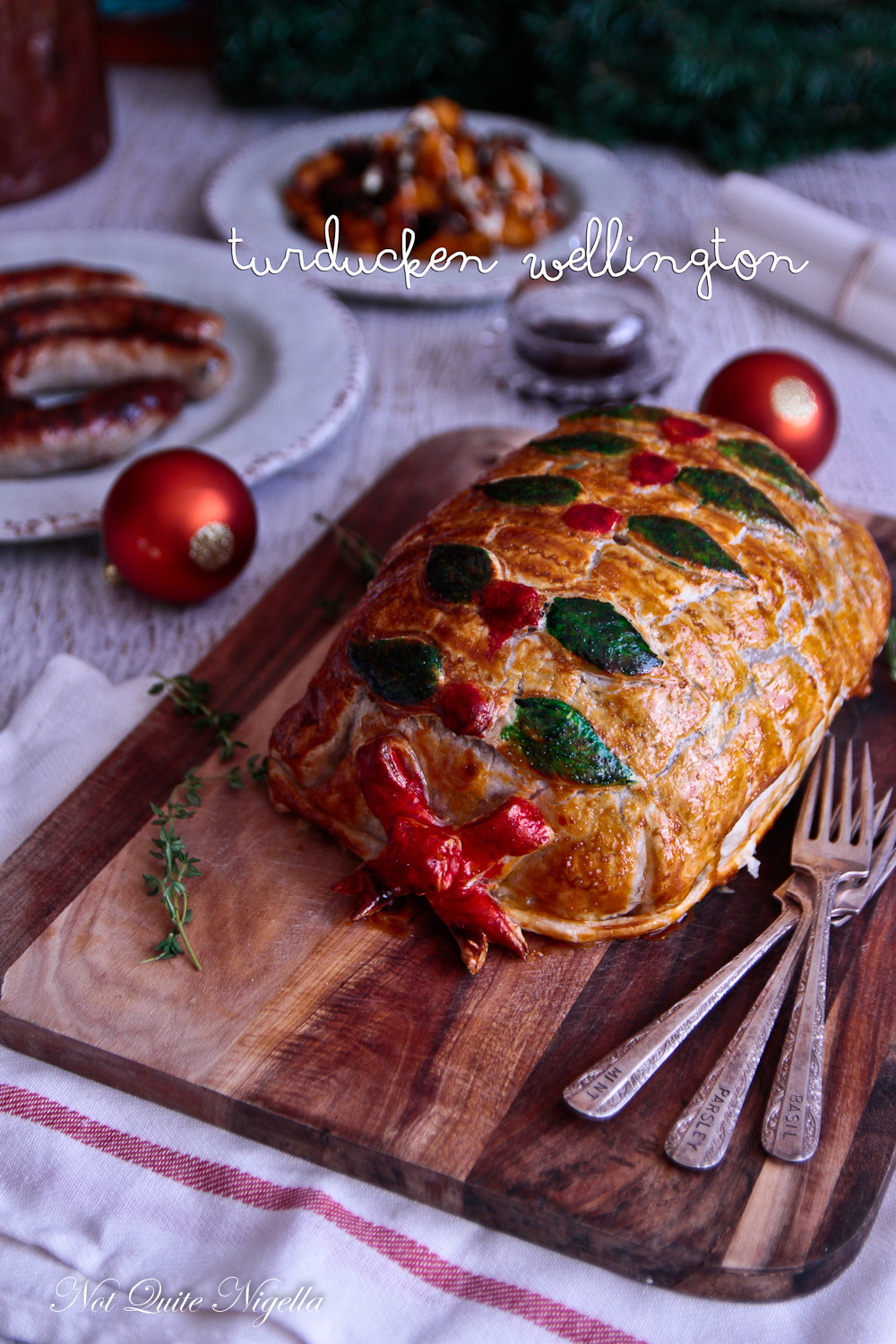 A surprisingly easy recipe made easier using a boneless turducken. The turducken is baked then topped with mushroom duxelle and then encased in a puff pastry layer. It is decorated with holly leaves and berries cut out of puff pastry and baked until golden. The holly leaves and berries are then painted red and green. The result is moist, tender meat and crispy, buttery pastry much like a classic beef wellington with a festive touch. 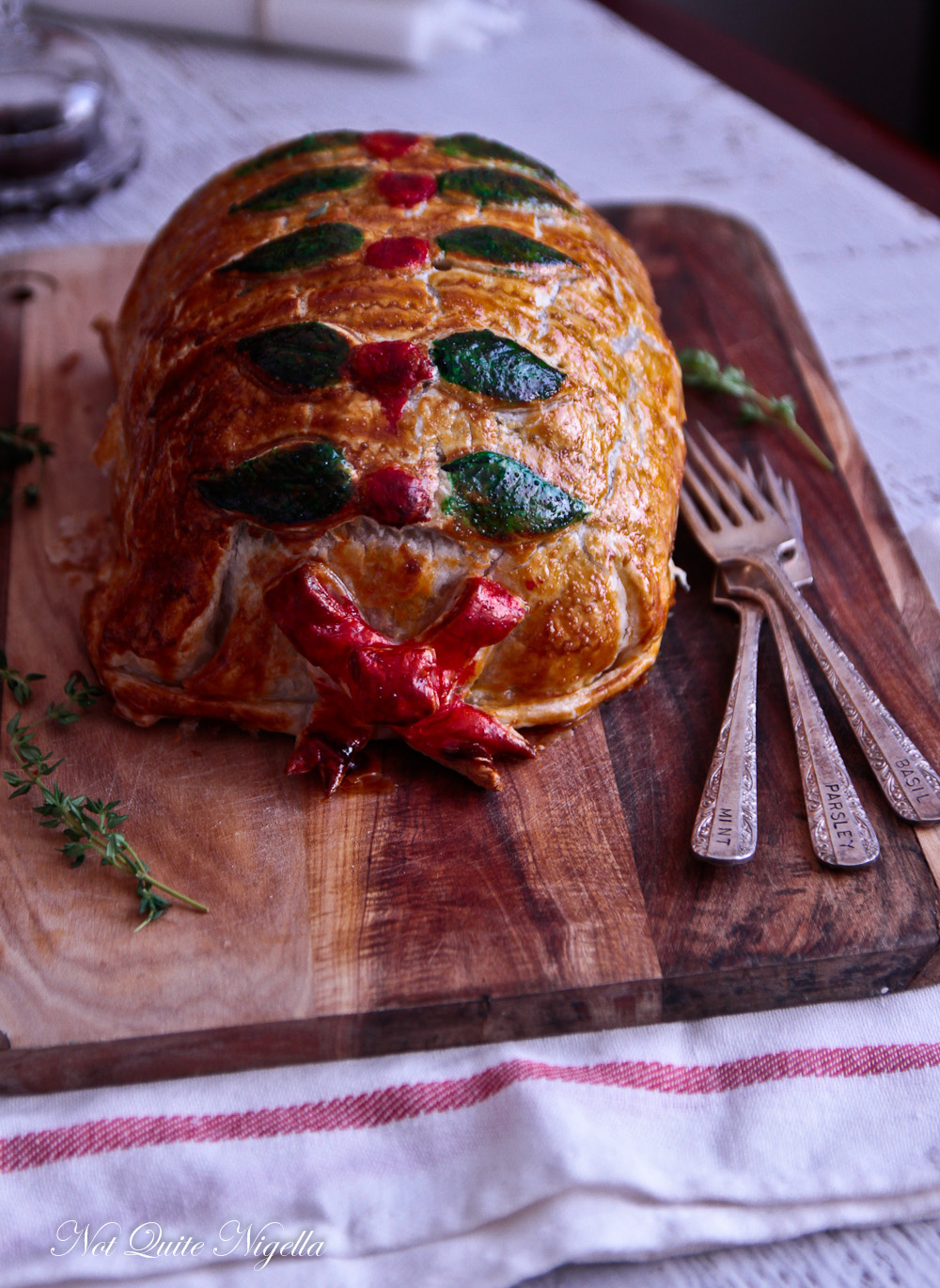 I can be one of those very annoying literal people. You know sometimes when people say "Oh we should have lunch!" I usually answer with "Okay great, when?". When you are talking to people that don't actually mean it and just say it as something to say, this can throw them off. It all started when I met someone that said it to me every time that we met. Sick of hearing it I then asked "Ok when?" and well...we never had lunch and she stopped saying it! Clearly my bad, I was meant to just say "Yes we should!" and not asked when. 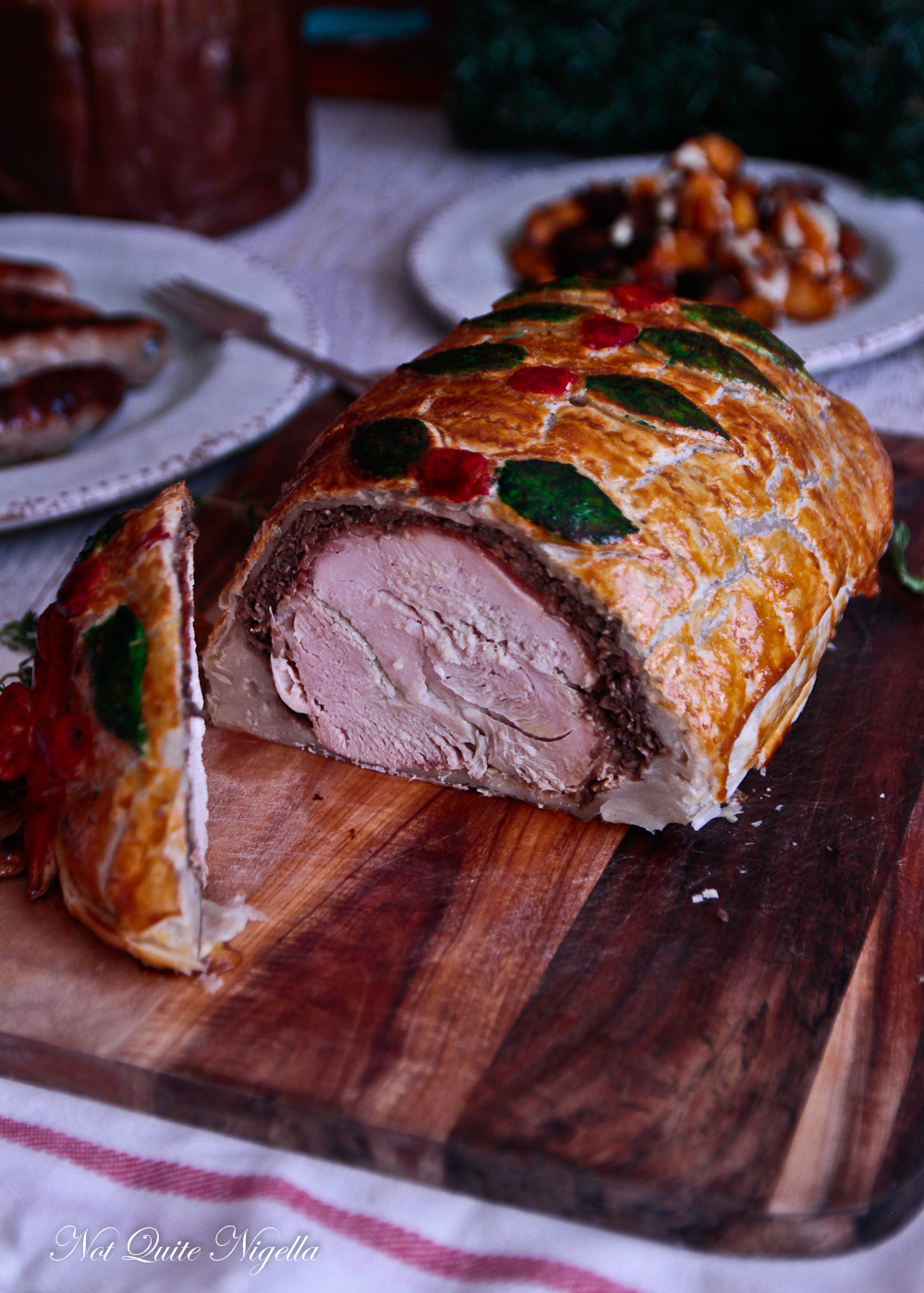 It's like when we discuss things and your friends say "We should do this!" to some semi crazy food adventure. My response is usually to clap with glee like a happy trained seal and say "Yes, when can we do it?" It can get you into all kinds of mischief but I don't really see the point in saying you'll do something only to not do it. To me to not do it would be a missed opportunity of executing a really fun idea.

One of these crazy food ideas was when I made a Turducken from scratch. You may know that crazy part chicken, part duck part turkey beast based on the famous rôti sans pareil (roast without equal) where 50 creatures are stuffed inside each other? I deboned the turkey myself which was absolutely the most violent thing that I've ever done. If I were the type to drink scotch after a stressful event I would have. But the turducken was done and it was delicious and well we were eating turkey for about 3 weeks after that. 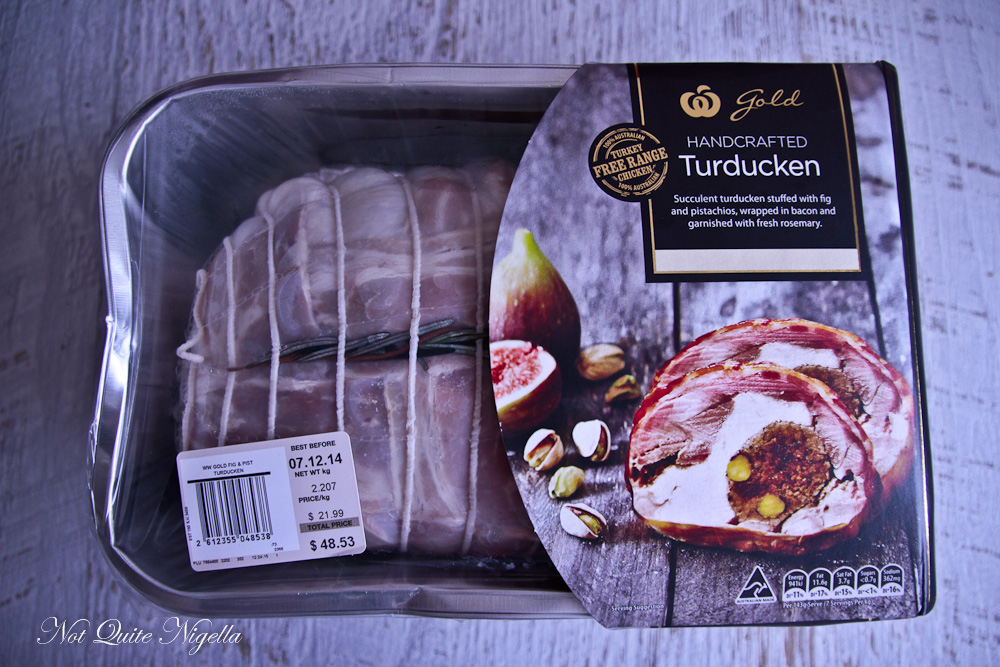 Much more manageable is this smaller boneless handcrafted Turducken by Woolworths Gold, a silver award winner at the Sydney Royal Fine Food Awards. They first put it on the shelves last year at Christmas and just could not keep up with demand and it sold out quickly before Christmas even arrived. This year they have more but even still, I only just managed to grab the last one on the shelf. This Turducken will feed about 6 to 8 people with sides which is better than the whole thing that feeds over 30. It is also boneless which makes it perfect for a wellington. And randomly, can you believe it but there are no search results for Turducken Wellington?! I can't believe it because a Turducken Wellington is so, so good. 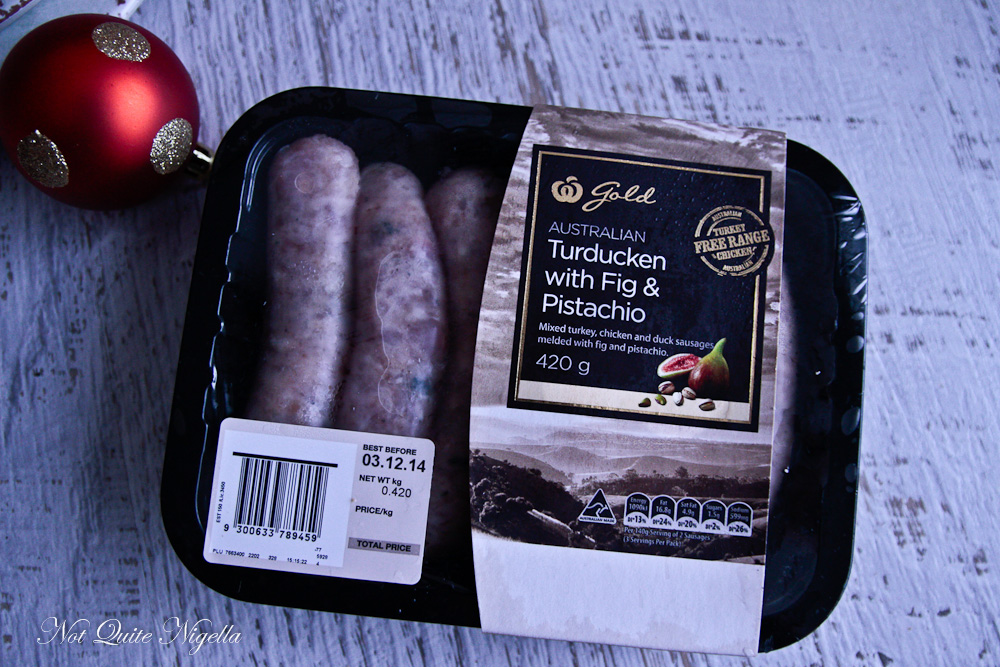 More interesting than a regular beef wellington this Turducken roast is made with Australian free range turkey from the Southern Highlands and Australian free range chicken and Australian duck fillet. It is filled with a fig and pistachio stuffing, rolled and then wrapped in bacon and garnished with rosemary. If you want to give the turducken flavour a go, there are also Woolworths Gold Turducken sausages also with fig and pistachio which are great with a cranberry sauce or gravy. 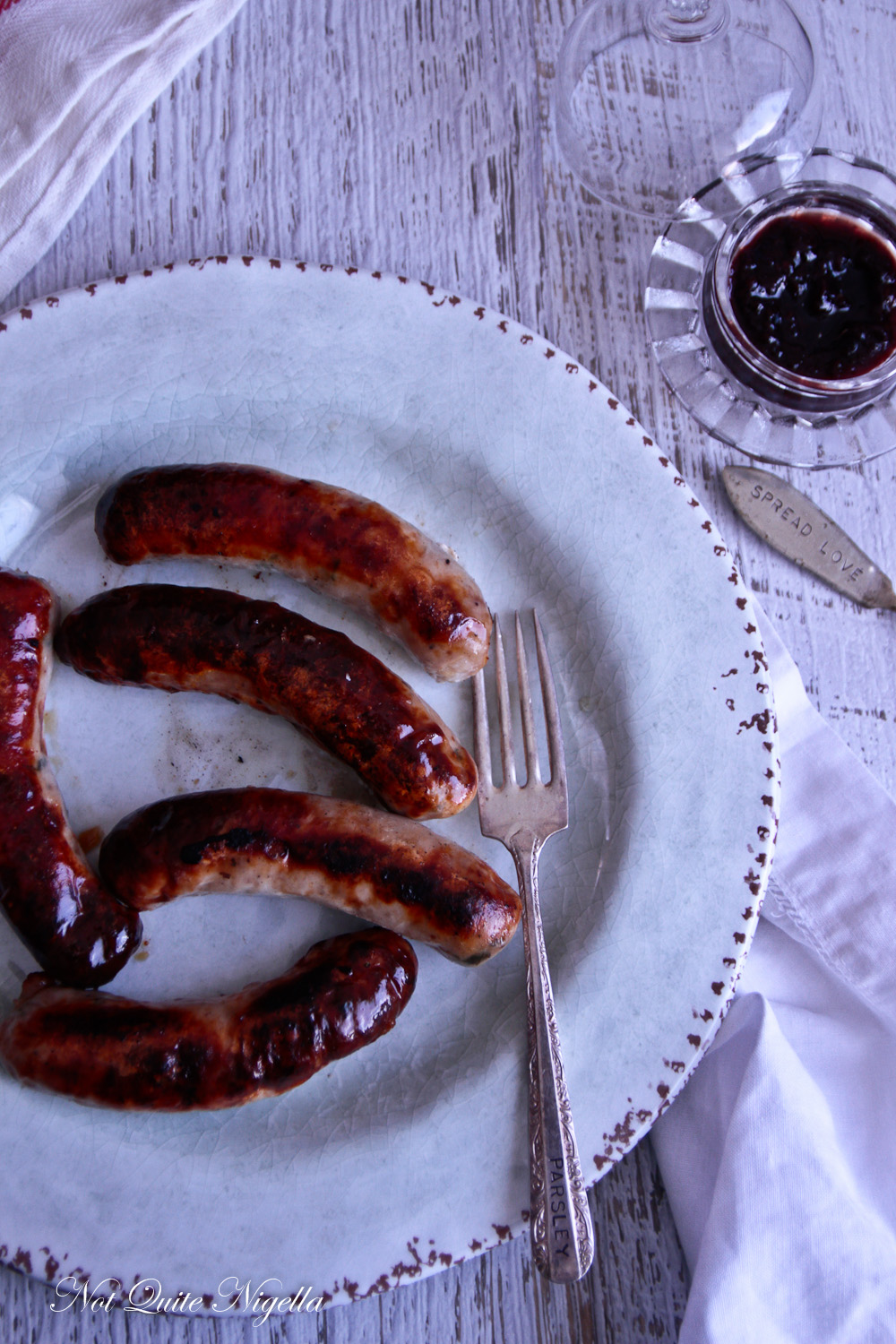 The whole process does take a while as you cook the turducken until completely cooked through and then cool so it is time consuming but not difficult at all. The only virtue you will need is patience - it took just under 3 hours to cook our 2.2kg or 4.85 pound Turducken. But it also means that you can start it the day before and put the final wrap of pastry on it afterwards and give it the final bake just before guests arrive that takes any anxiety out of whether your meat is completely cooked or not.

It's up to you as to how you want to decorate it. If you have some lovely cutters by all means use these-I decorated it with holly leaves and berries and painted these just to give them a little colour or it also looks great without any colour on them. But if you are looking for a show stopping Christmas roast, do give this a try because it is absolutely delicious served with cranberry or redcurrant sauce and gravy made from the pan drippings!

So tell me Dear Reader, do you tend to take things literally like when people say "We should have lunch?"?. And do you have a show stopper dish at Christmas every year? What will your menu be like this year? I'm dying to hear about what you're all eating! 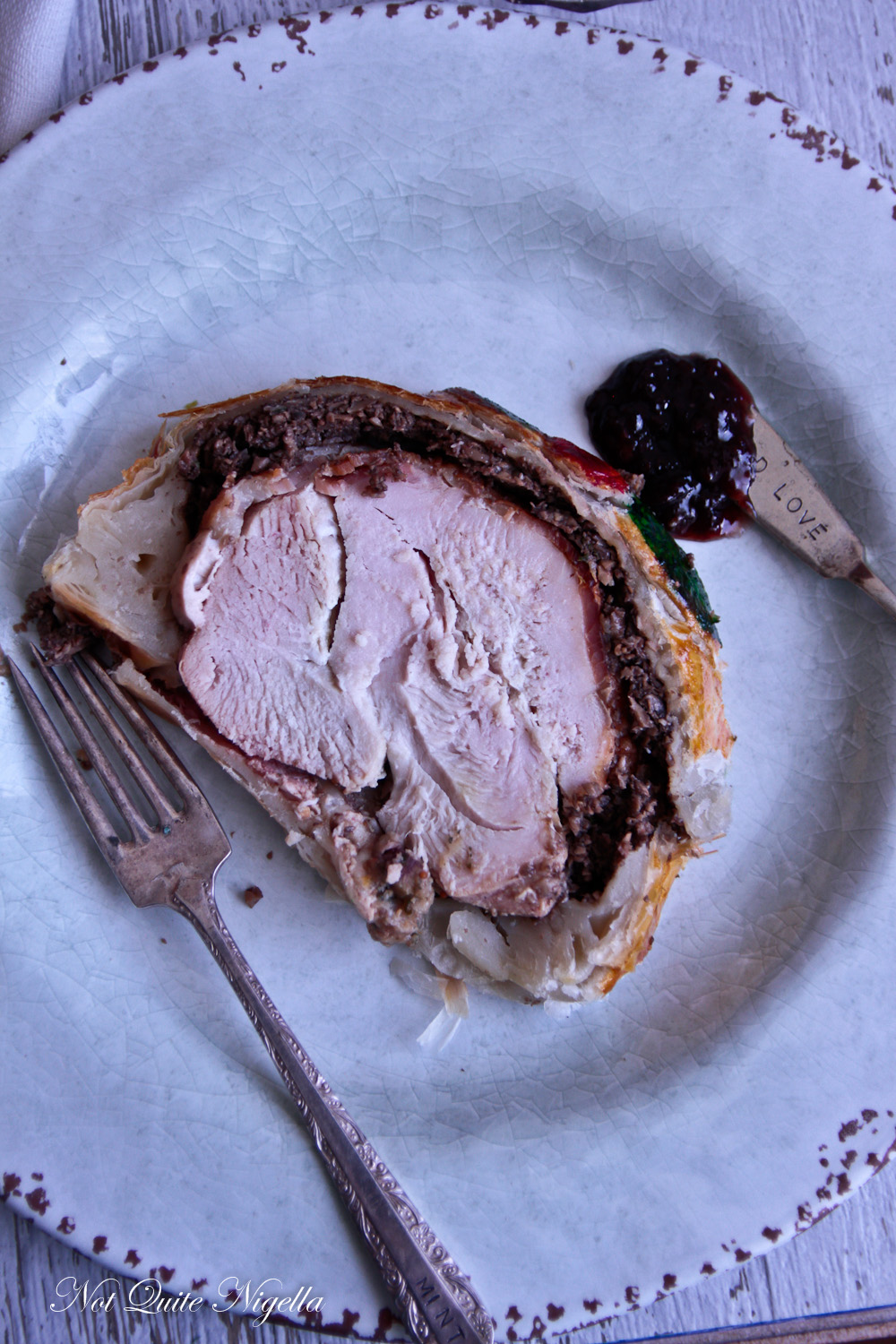 Cooking time: 3 hours (depending on size of Turducken, cook for 40 minutes per 500g/1 pound)

Step 1 - Preheat oven to 190C/374F. Remove the plastic top, cover with foil and roast as instructed (40 minutes for every 500g or 1 pound). Cool completely and cut away the string and netting. Reserve the pan drippings to make gravy-it tastes fantastic! 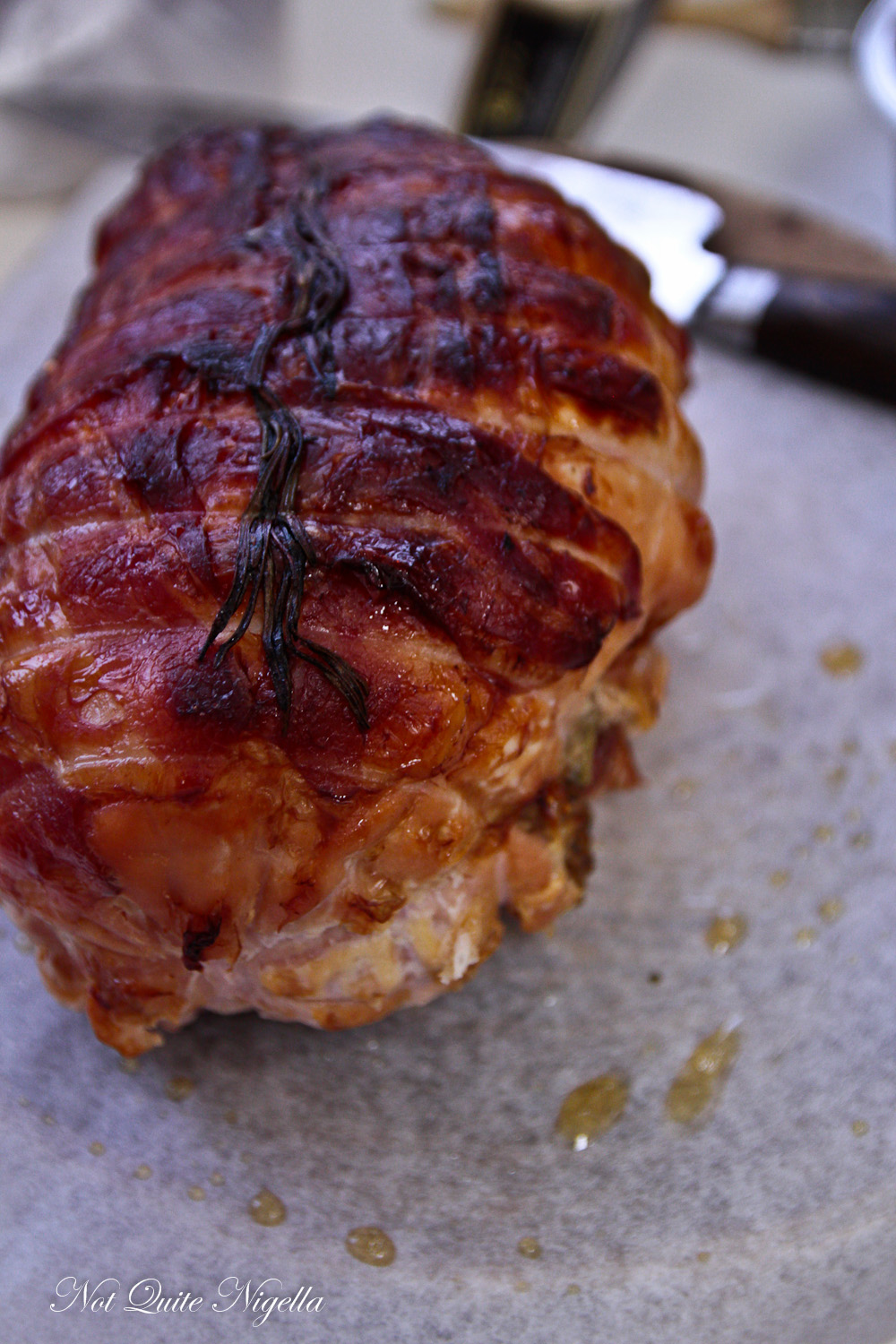 Step 2 - While the turducken is cooking, finely chop the mushrooms (I put them in a food processor). Heat the butter and oil in a frypan on medium heat and cook the garlic until fragrant. Add the mushrooms, red wine and thyme and cook until the mushrooms are soft and the liquid has evaporated. Cool. 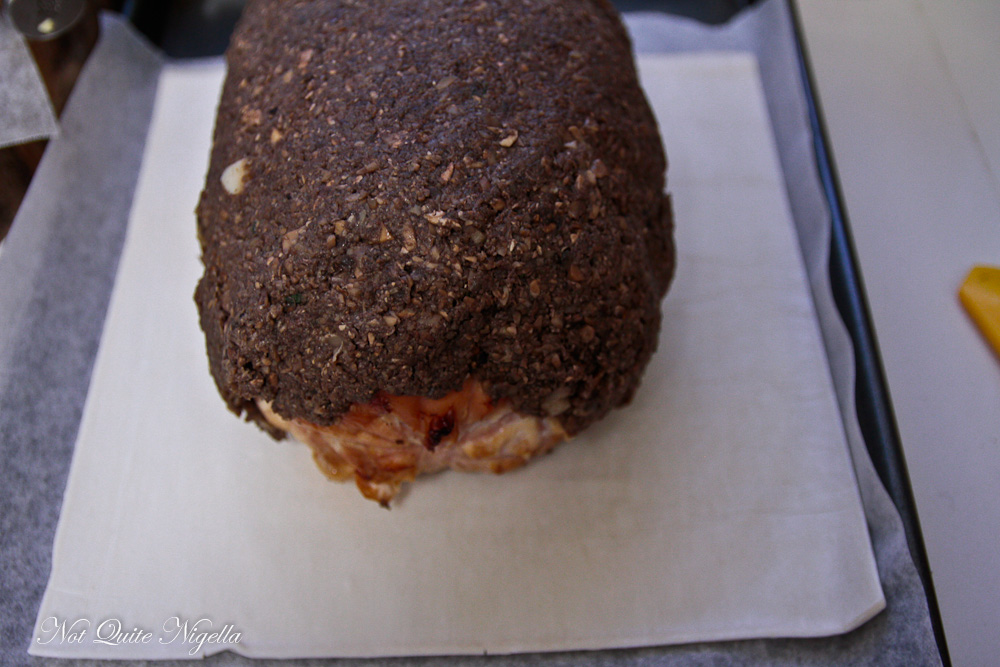 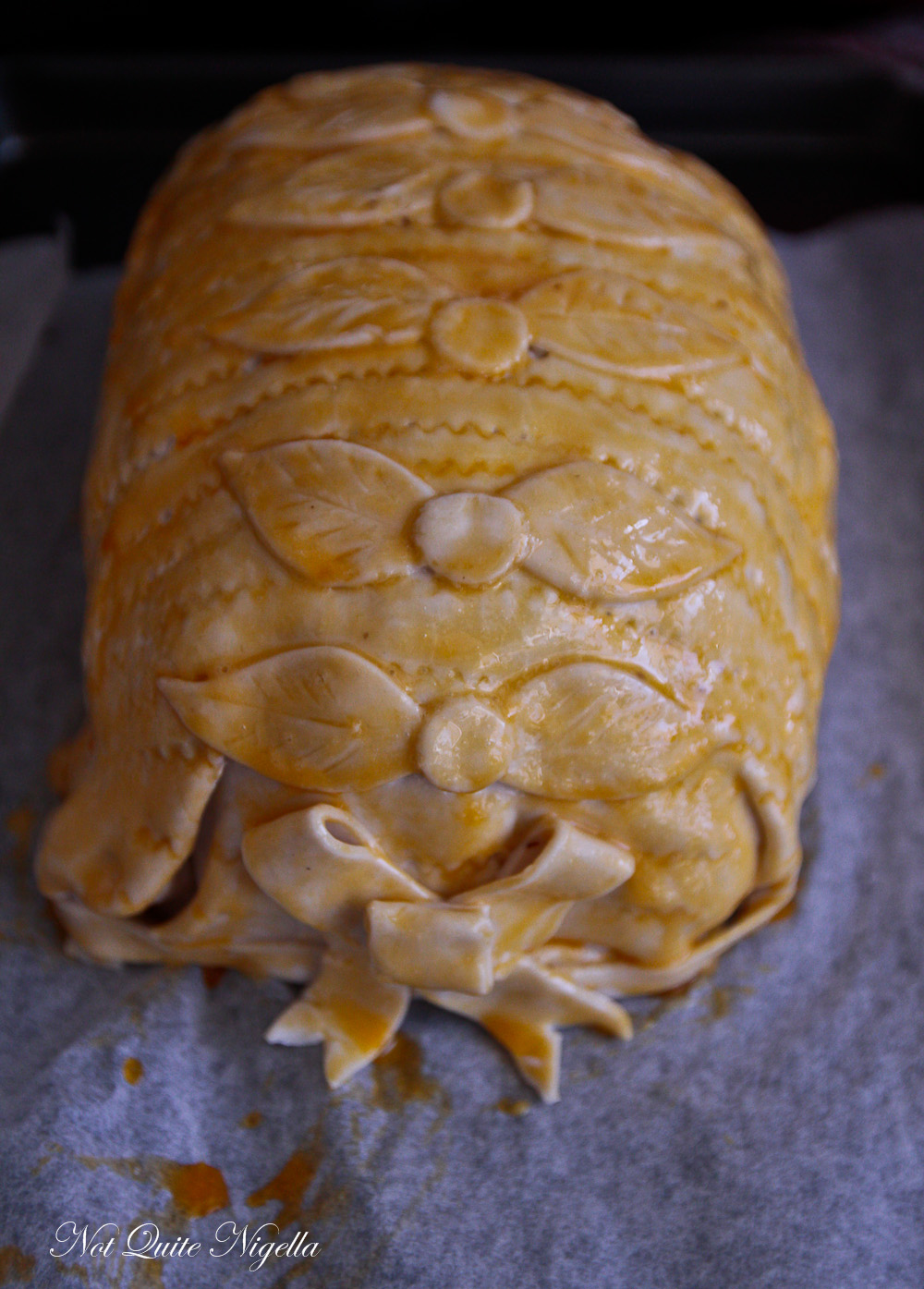 Step 4 - Preheat oven to 200C/400F. Bake the turducken in the oven for 20-25 minutes until the pastry is golden. Using paintbrushes, paint the holly leaves green and the berries red. The reason I paint them after this goes into the oven is because the pastry expands and the colours develop tiny little cracks. Allow the finished Turducken to stand for 10 minutes before slicing. 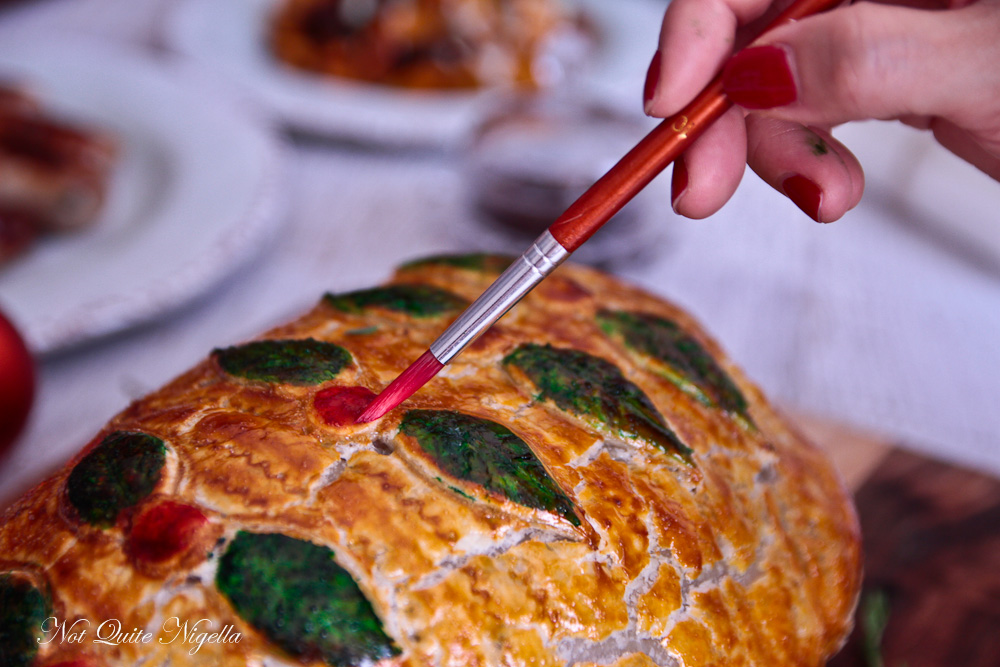 Painting the holly leaves and berries