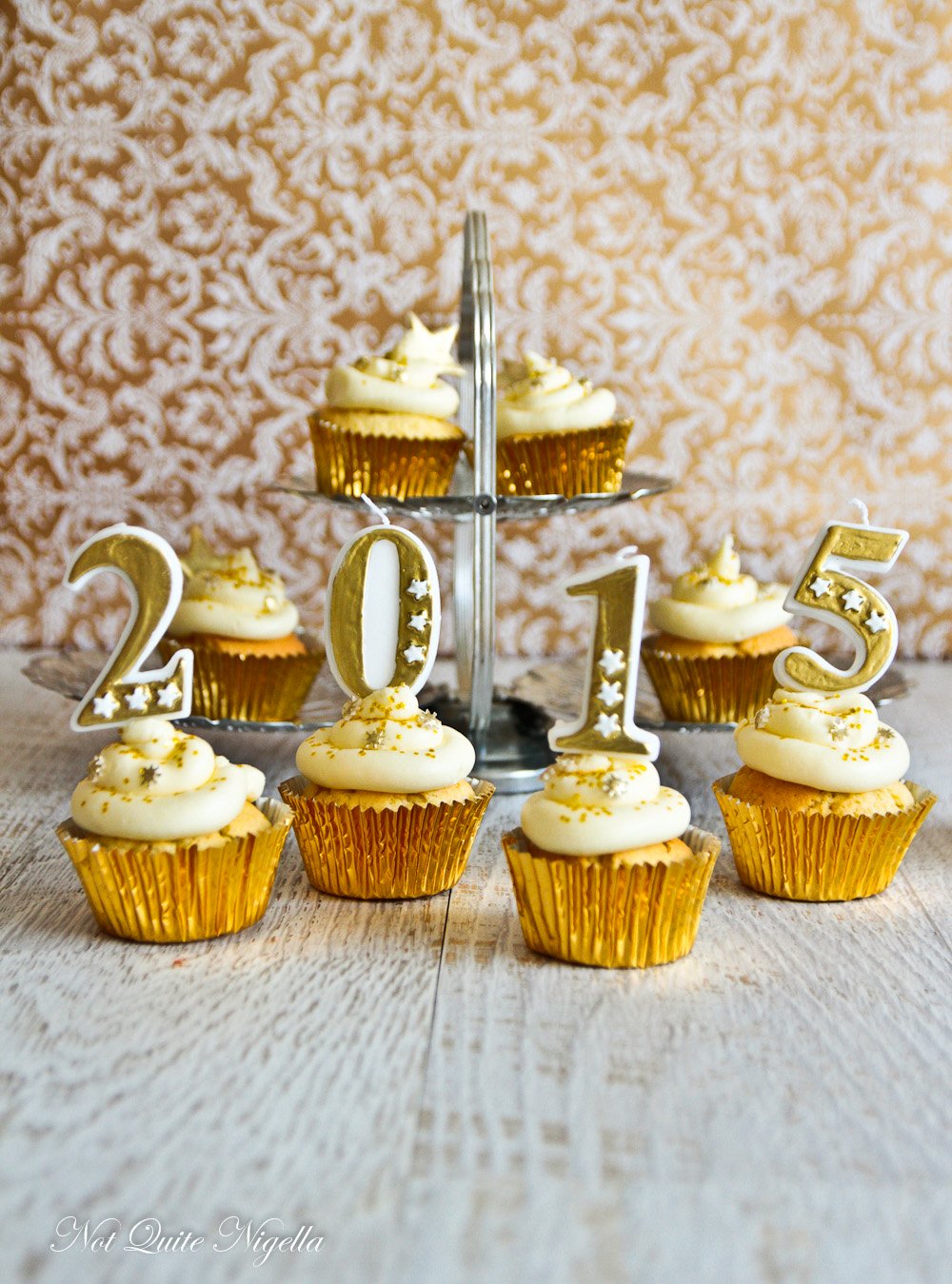 These glittery gold cupcakes are flavoured with champagne or prosecco to give your new year a festive touch. They are decorated with tiny and large hand made painted gold stars and the magic numbers to celebrate 2015.

At the risk of grossing you all out (and admittedly, it's not a great start to a recipe post!), for the past week and a half I've been trying to shake this ridiculous cough.

"I must have giant lungs!" I said to Mr NQN after day five. "Because I have so much mucus, I am pretty sure that I am a mucus factory!"

The thing is, I feel fine, it's just the constant coughing and disgusting mucus production that is putting a damper on my social life. I had just woken up and with my hair askew, I blew my nose and coughed for a good 10 seconds. "Sexy," Mr NQN said sarcastically. I was not too weak to punch him... 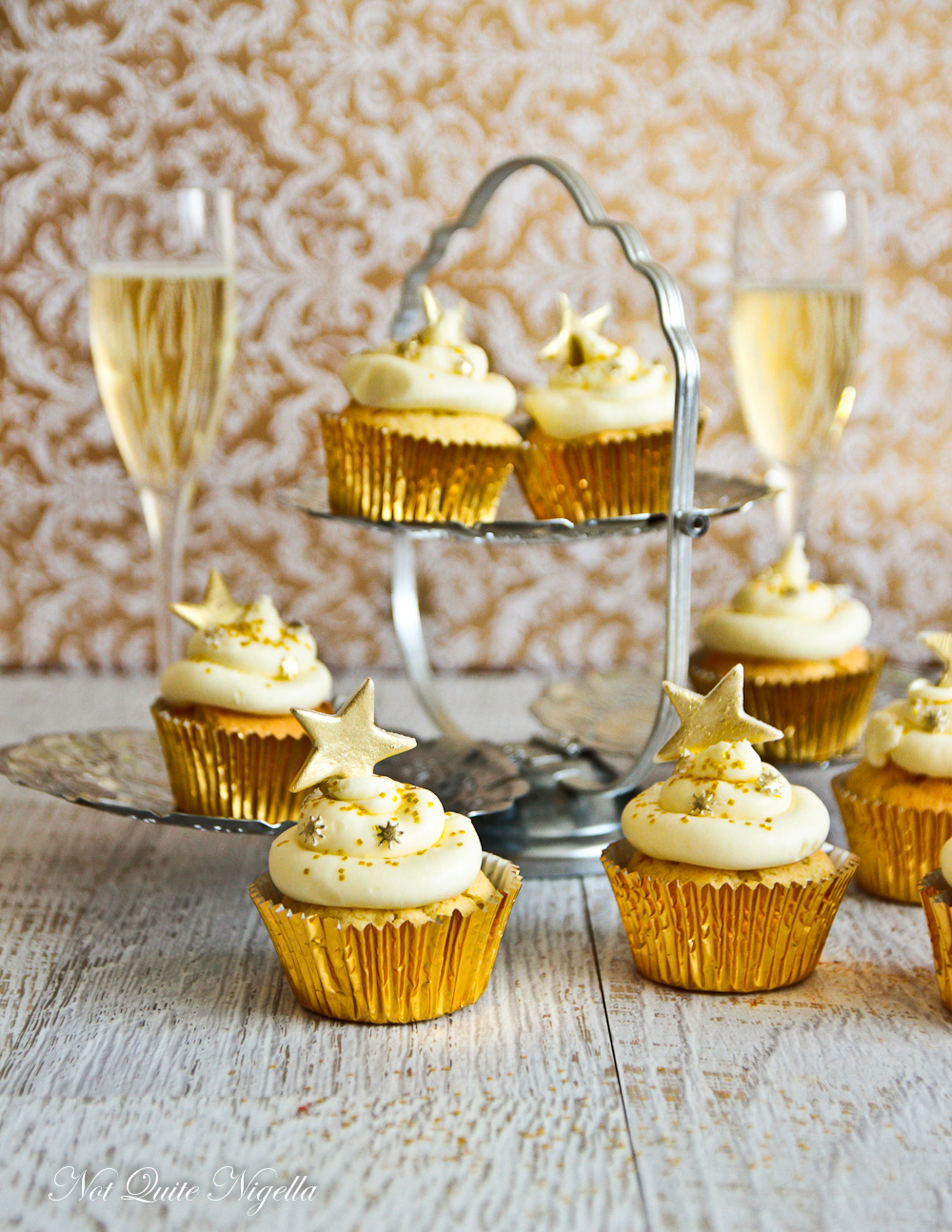 It got so bad that I asked him to tip me upside down so that some of the mucus could dislodge. This was after I started shaking my head to dislodge it. So there we were, in the bedroom, the pillow on the floor in case he dropped me on my head and he was shaking me while I was upside down. It seemed like a good idea at the time.

You see I need to be better for New Years Eve. It's an evening I find challenging at the best of times. There is just such high expectations on one night of the year and unlike Christmas, where we always seem to have a good time, New Years Eve can be fraught with problems. This year we are going to a friend's apartment - she possessed what popular people at NYE have, a water view. And because it always ends up being a long night, I wanted to be well. Not upside down at the end of my bed while my husband shakes me....

I was asked to bring along some cupcakes. Now that was the easy part. I already had a picture in my mind of the cupcakes. They would have to be gold and glittery - it's the showgirl in me and of course champagne had to be involved. Mr NQN suggested adding pop rocks as a little surprise to simulate bubbles popping. Making these cupcakes was straightforward and if you don't have the time to make the stars then you can make do with the edible gold glitter. You can really make these as simple as you want or as complicated! I loved the soft texture and the flavour of these cupcakes and using prosecco or champagne and the surprise bite of pop rocks will hopefully delight your guests!

So tell me Dear Reader, what are your plans for New Year's Eve? Do you feel a lot of pressure to do something significant then or are you past that? Do you cook or eat anything special for the occasion? 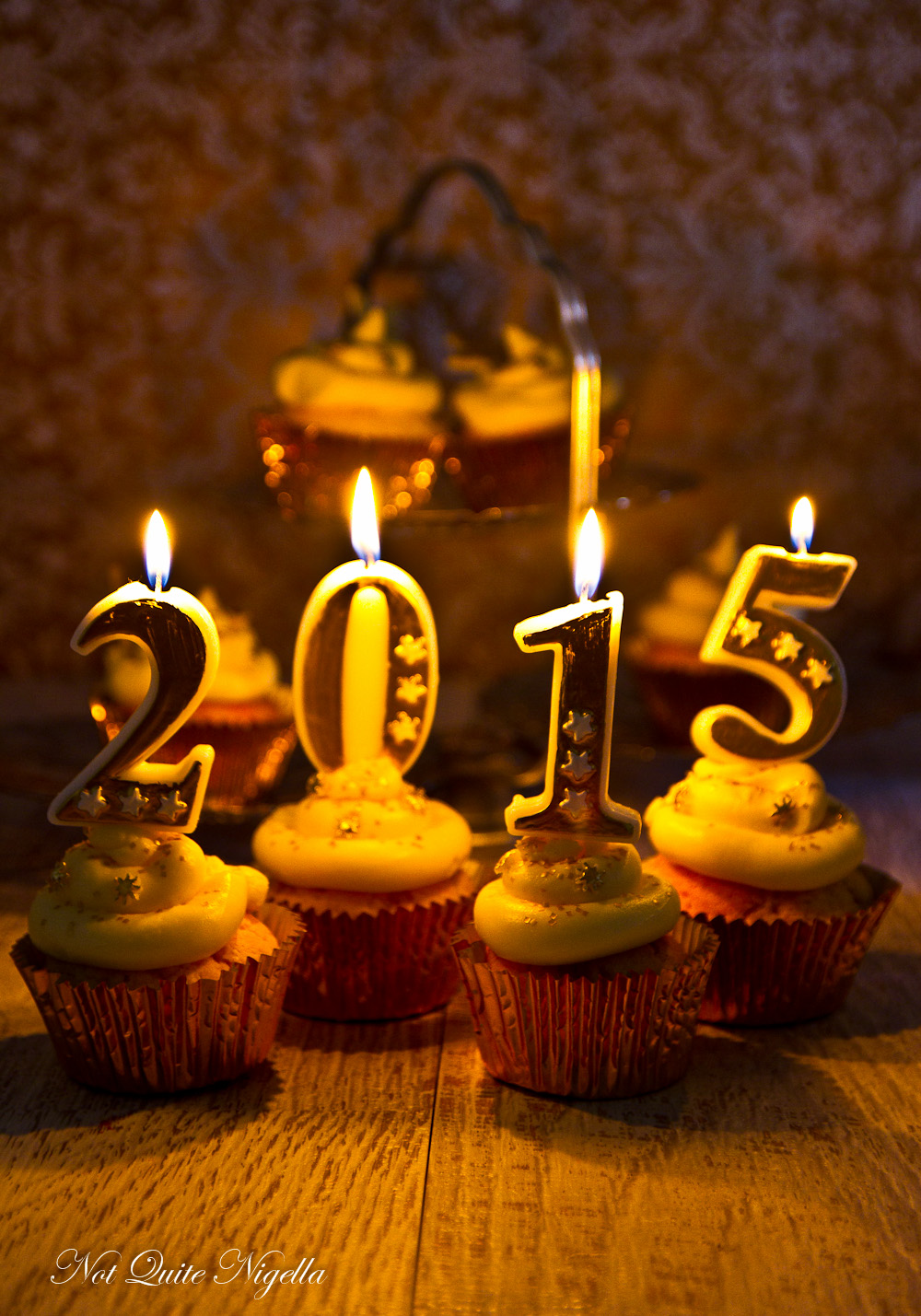 *Cocoa butter pop rocks are coated in cocoa butter so that they are ideal to use with a high moisture item. The buttercream icing I used is a high fat mixture but I was overly cautious and wanted these to stay "unpopped" until the last minute as I was making them ahead of time. 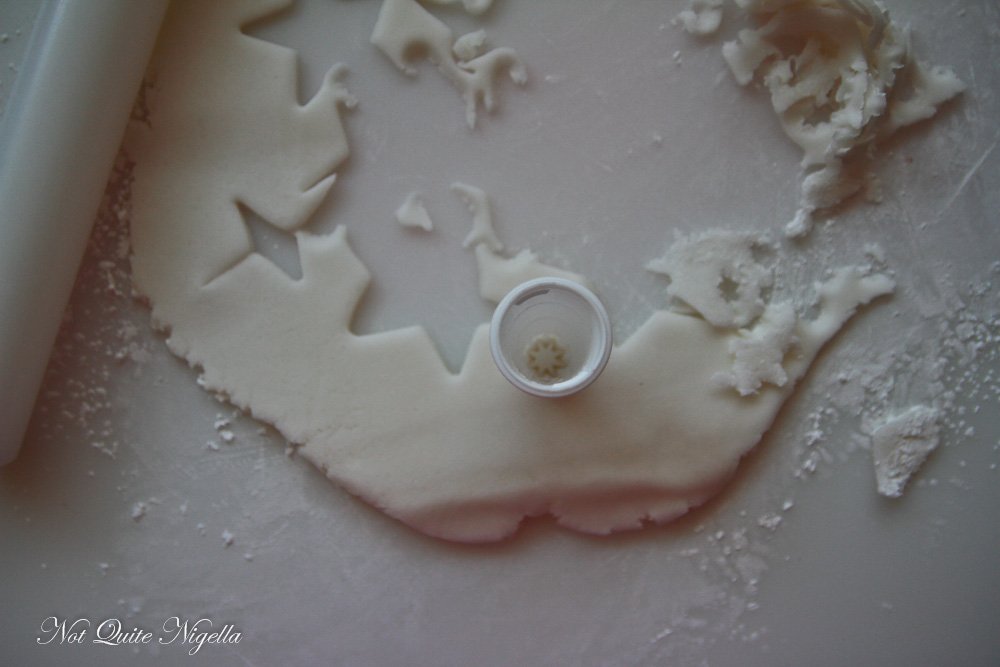 Step 1 - Make the fondant stars first as they will need to set and dry. I used a large star cutter as well as a star tip cutter upended to make lots of teeny little stars. Shake a little cornstarch onto a non stick surface and roll out the fondant using a non stick rolling pin. Cut out small and large stars s- about one large and 3-4 small ones per cupcake. Allow to harden a little for an hour. Paint with liquid gold and allow to completely harden (overnight if you have the time but a couple of hours should do). 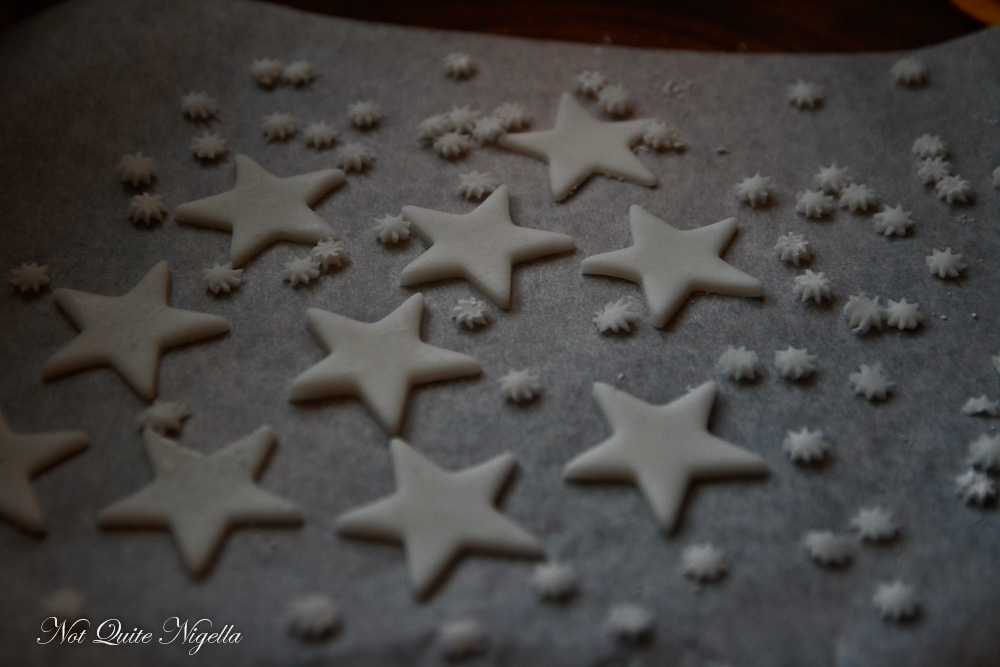 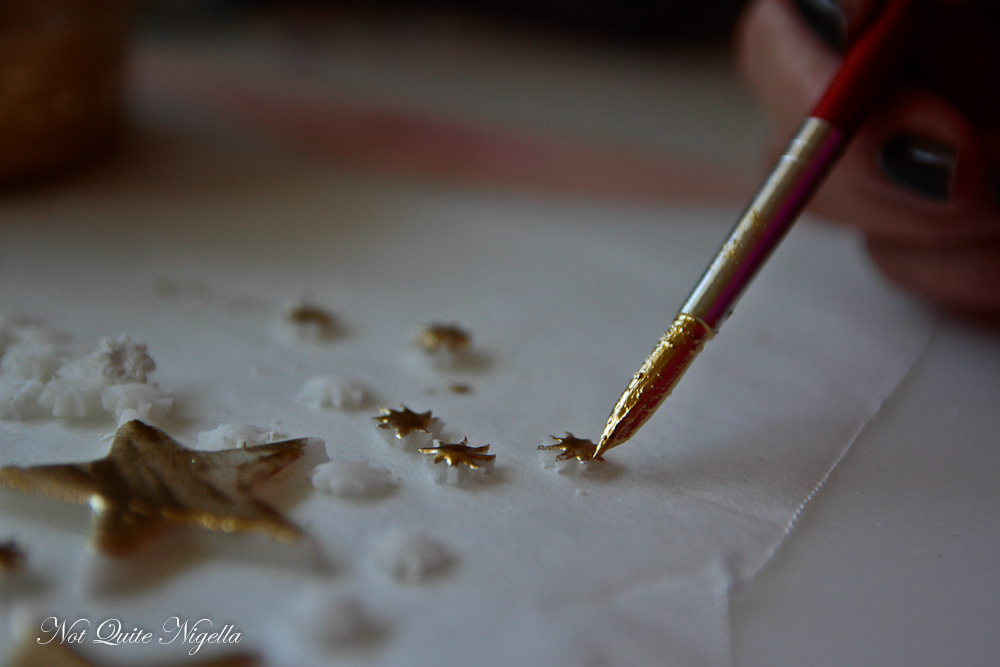 Step 2 - Preheat oven to 160C/320F and line one and a half cupcake trays with liners (18 cupcakes). Beat the butter and sugar until pale and fluffy. Add eggs one at a time until combined. On slow speed add the flour and champagne or prosecco and vanilla until just combined.

Step 3 - Use an ice cream scoop to divide into 18 cupcakes (no need to smooth these over). Bake for 25-30 minutes or until a skewer inserted comes out clean. Cool completely. 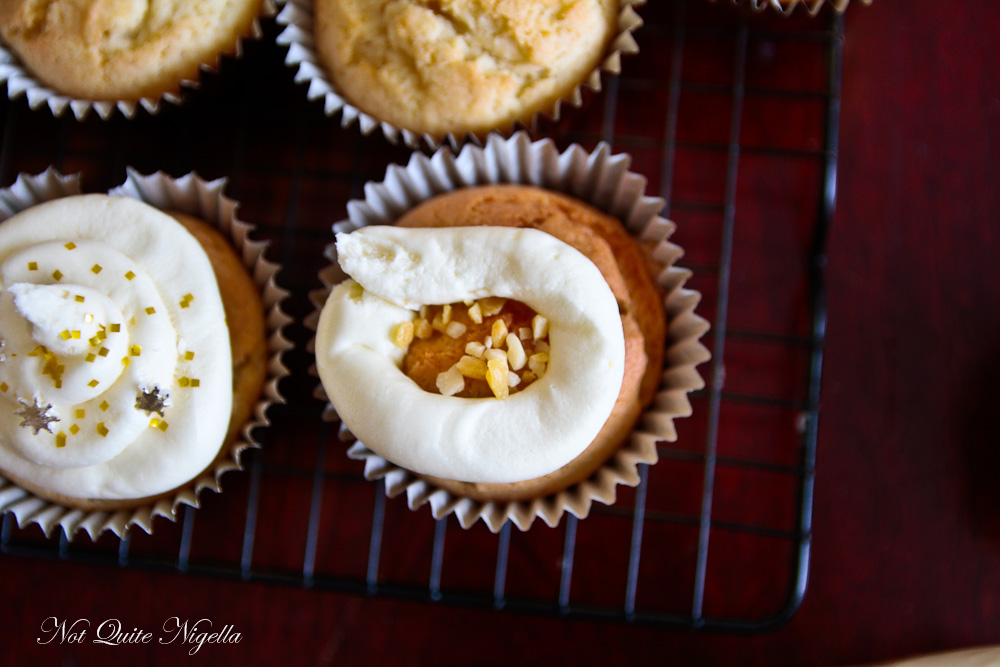 Step 4 - To make the buttercream, beat the butter and then add in the prosecco or champagne and icing or powdered sugar on low speed until combined. Beat until fluffy. Place in a piping bag with a large plain tip (I just snipped off the end of the bag). Pipe a circle of buttercream around the outside of the cupcake and then fill it in with the cocoa butter covered pop rocks. Pipe more buttercream on top.

Step 5 - Decorate with the edible gold glitter, 3-4 tiny stars and 1 large star. Place the 2015 candles on four of the cupcakes.