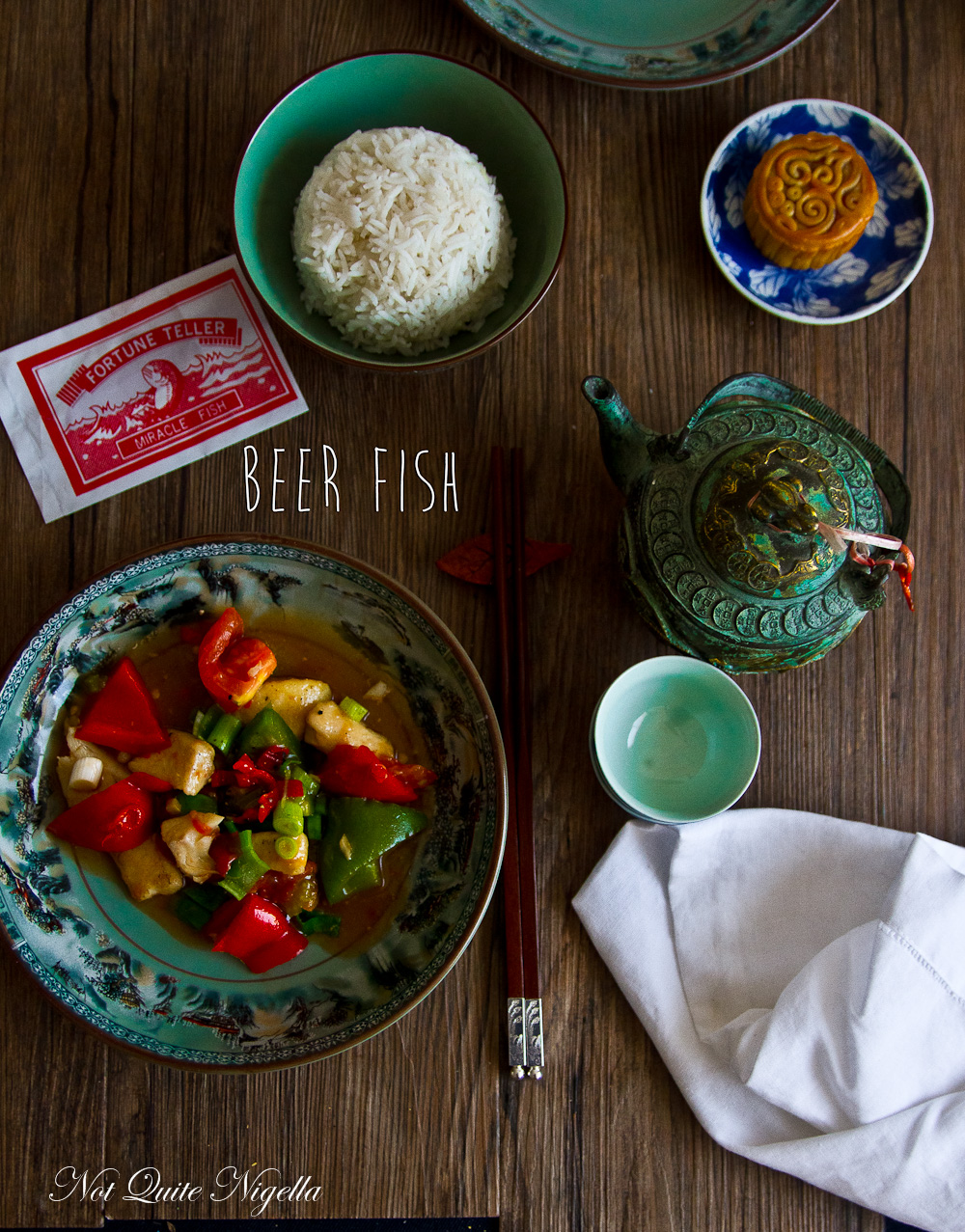 A seafood dish that you don't often see on menus in Australia, beer fish is a popular dish from the region of Guilin in Yangshuo. Surprisingly simple, it is made up of tender fish pieces with vegetables and a delectable beer sauce. It can be made in about 30 minutes which is another blessing.

I thought I had pretty much met every type of person while travelling but sometimes the interesting thing about travelling is being hit by an unexpected curve ball. My curve ball was a travel writer in our group.

"I want McDonalds! Can't we have McDonalds?" she said on our third day travelling in Asia. I laughed, at first I thought that she was joking but it turns out she wasn't. She wasn't actually fond of Chinese food at all even buying some KFC when we were given some free time to wander around. The only Chinese dish she liked was fried rice. Unfortunately for her, one of the main focuses of the trip was food and Chinese food at that. I had initially liked her but after a few days of outbursts from her ("I hate China! There's nothing good to eat here!") my patience was starting to wear thin. 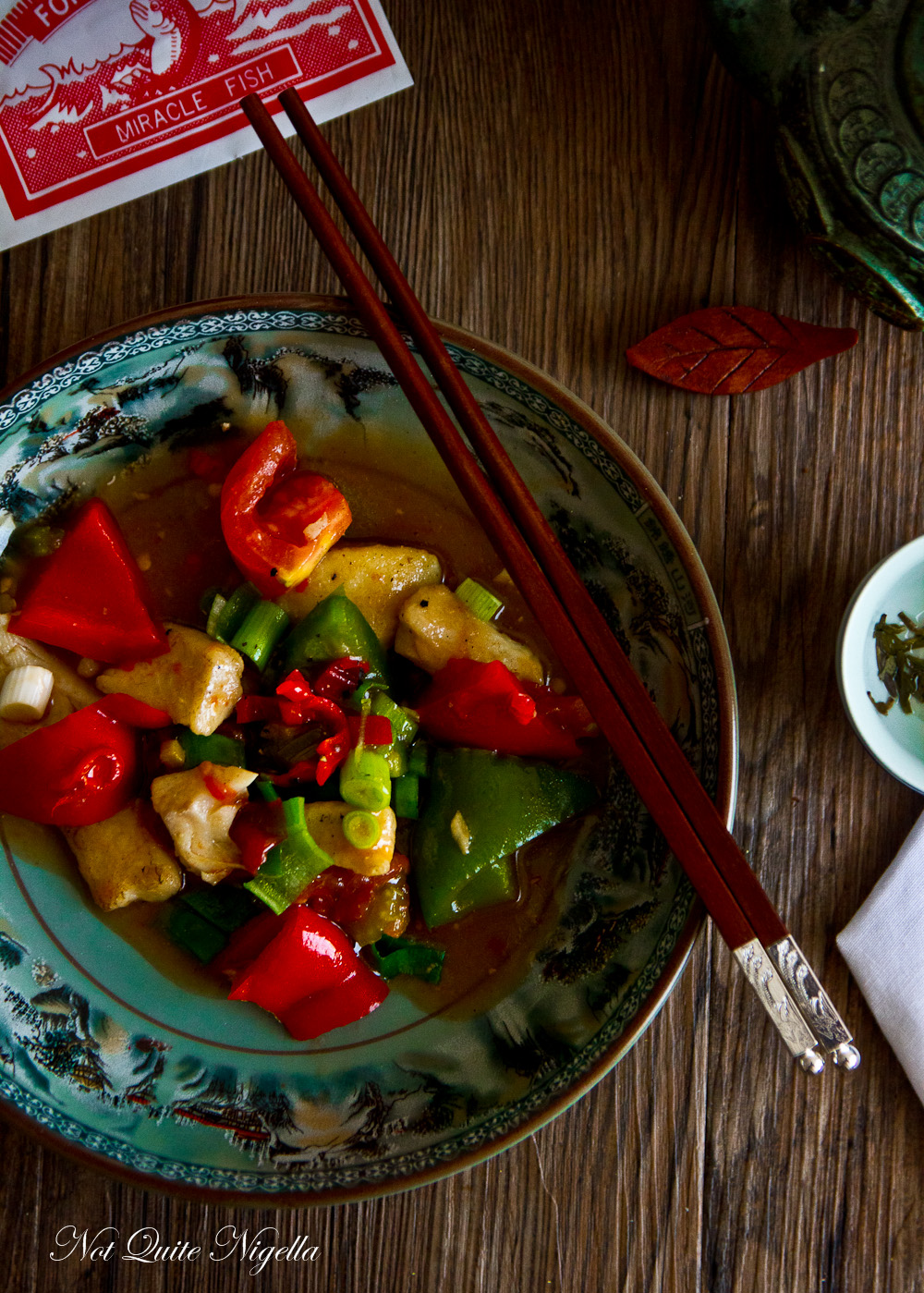 Anyway she remained unimpressed about this beer fish. The rest of our group of travel writers absolutely loved this dish from the Guilin area of Yangshuo and every dinner we would cry out "beer fish please!" when it came to ordering. Beer fish is a very simple 30 minute or less fish dish made with a delectable beer based sauce. You don't really taste the beer in it - the local beer used was quite light in alcohol but the sauce, tender fish and vegetables make up a dish that made our taste buds absolutely sing. And Dear Reader yes I'm being pushy here, you really should try it if you like Chinese cuisine :)

Towards the end of the trip, I thought that she softened. She had distanced herself from the rest of the group because of her attitude but she had one learned writer who was trying to school her on etiquette (i.e. don't offend everyone). I thought that she might have finally come around. Then on our last meal on a free day where we could choose what to eat she proclaimed loudly, "Just letting you know everyone, I am NOT eating Chinese food!" Off she went to get a burger while we went to look for our last Chinese meal there...

So tell me Dear Reader, when you go overseas, is trying the local food important to you? Do you miss fast food from home and crave it? Have you ever tried beer fish? 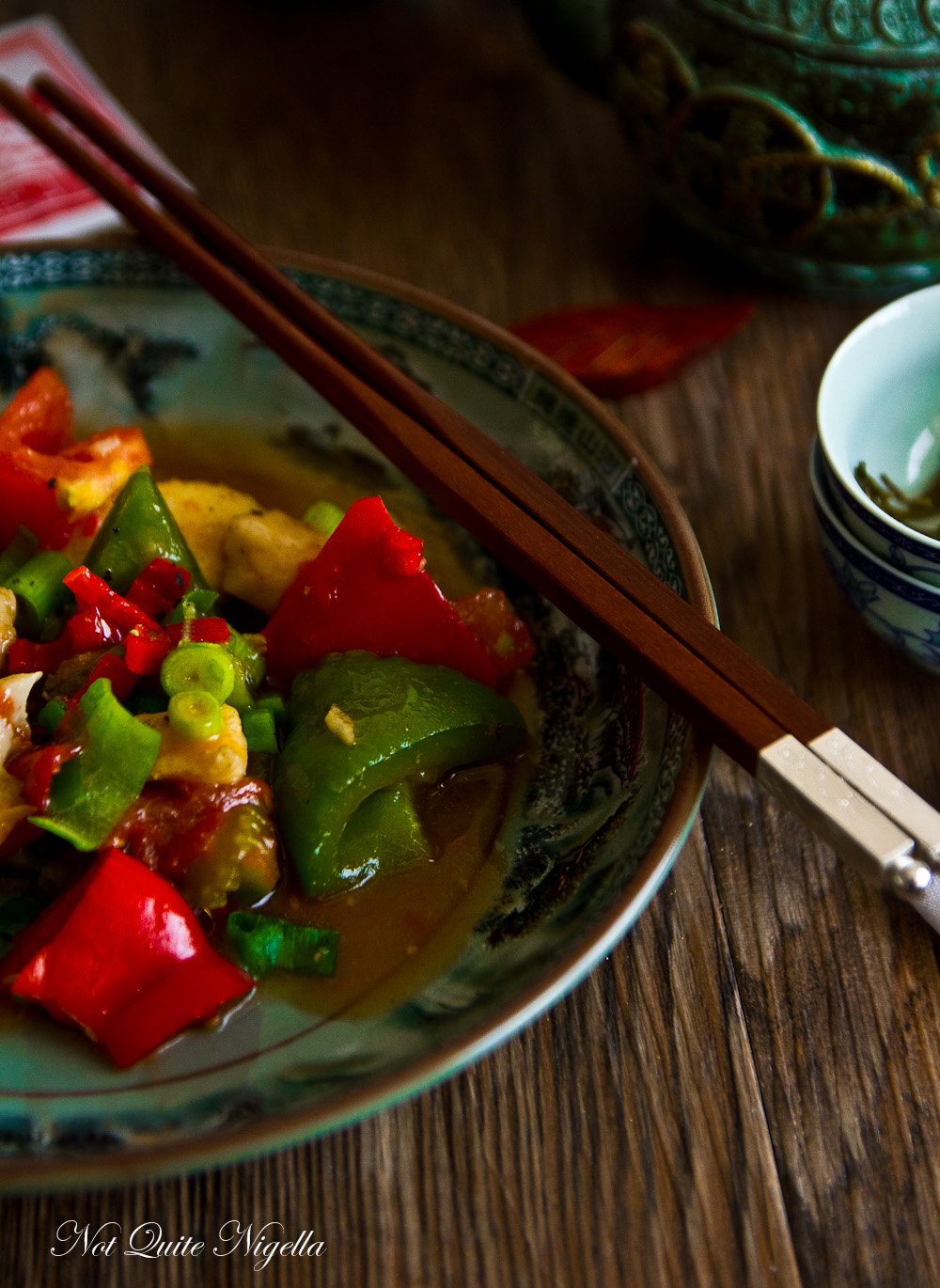 An Original Recipe by Not Quite NIgella 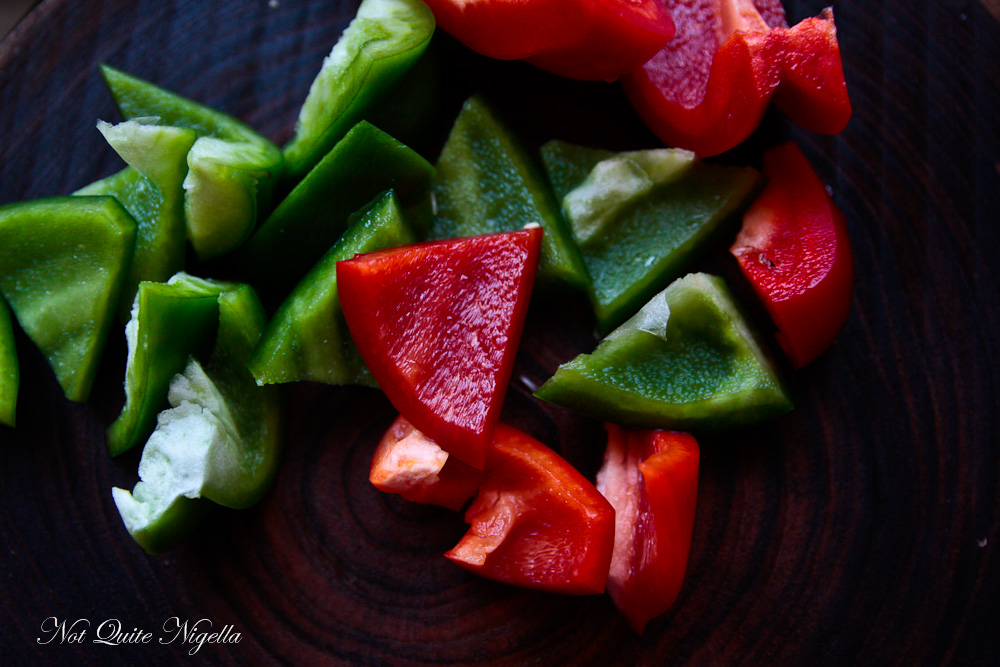 Cutting the capsicums into triangles

Step 1 - Mix the oyster and soy sauce, chicken powder, salt and sugar in a small bowl ready to use. Heat a wok or a pan on high heat until smoking. Knock back the heat onto medium and then fry the ginger, garlic and chillies for a minute until fragrant. Add the tomatoes and capsicums and fry for a minute or two. Add the fish and gently fry so that it gets browned (you can also deep fry the fish but I prefer not to deep fry). Add the oyster sauce mixture and 3/4 cup of beer (a light beer is best). Cook and gently, so that the fish doesn't break up, coat the vegetables and dish with the sauce two or three times. 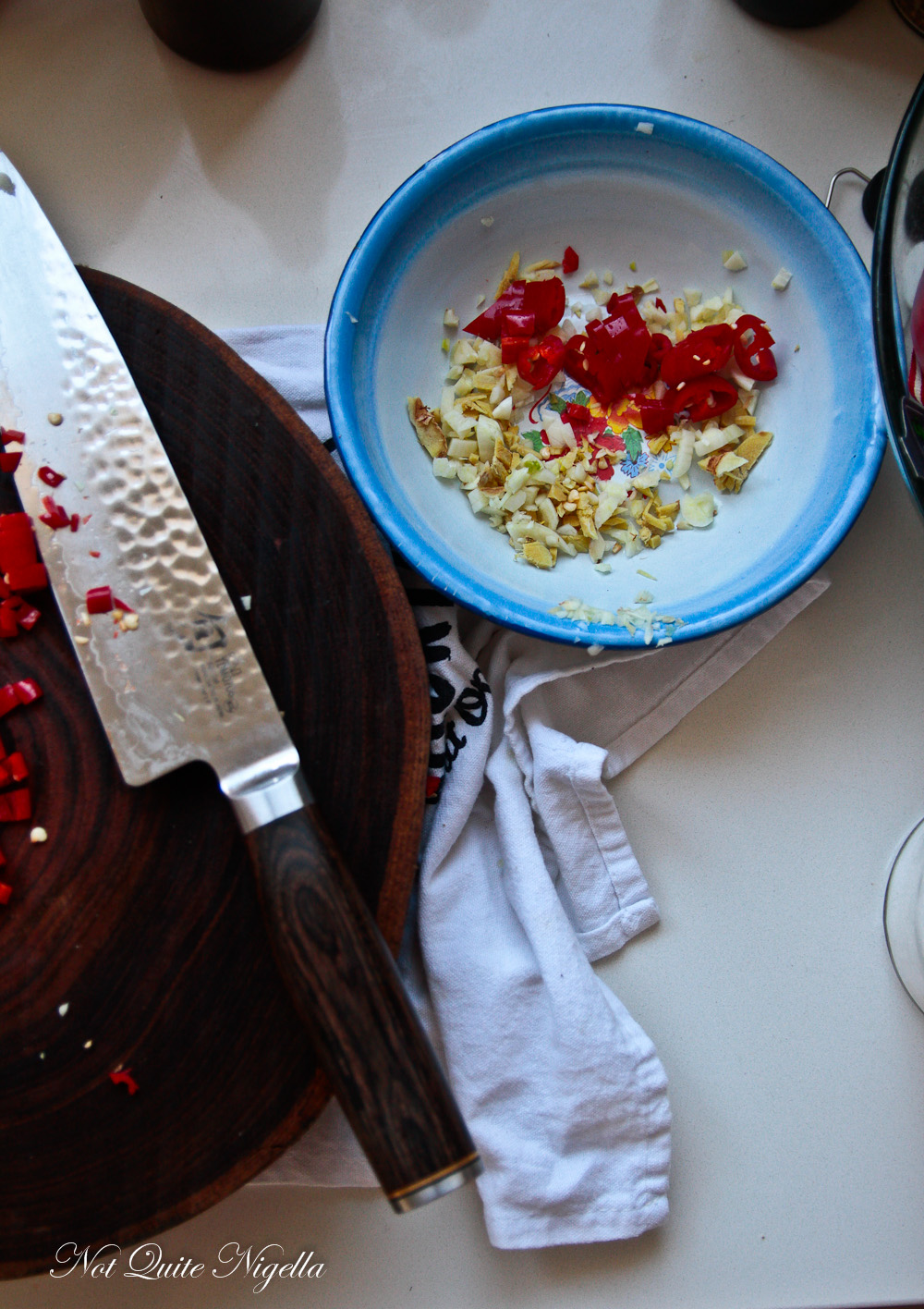 Step 2 - When the fish and vegetables are ready, turn the heat down to low and stir the cornstarch mixture together and add it to the liquid to thicken it. Drizzle with some sesame oil and serve with steamed rice.