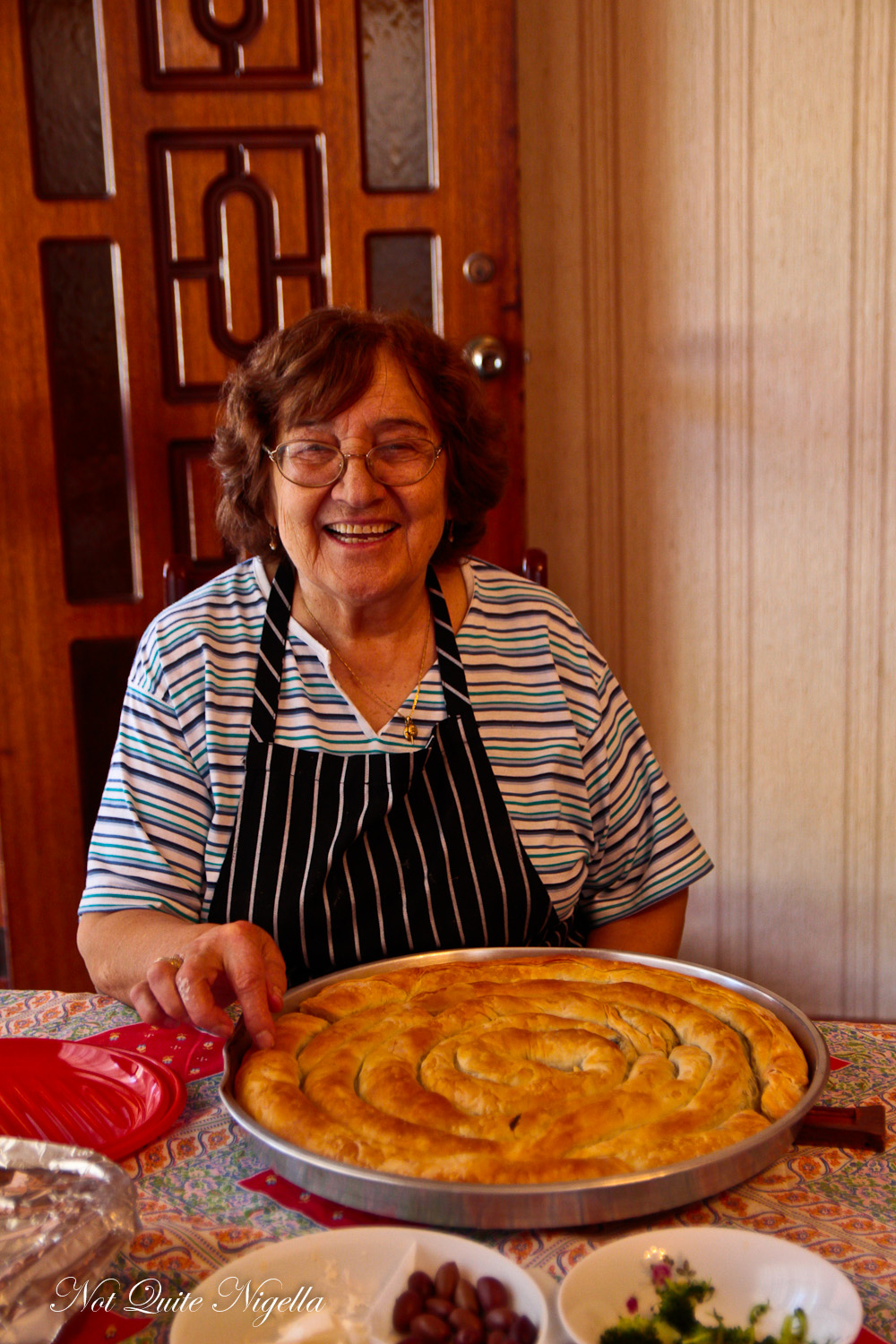 A popular Greek dish, spinach and cheese spanakopita is made with home made flaky, crisp pastry filled with cheese and spinach. The logs of pastry are then rolled up, coiled and then baked until golden brown. Best served warm it is a crowd pleasing dish that can feed many.

Dear Reader, recently I met royalty. Food royalty that is or more specifically the Queen of Pita (Spanakopita). Jenny Tsirekas has been making spanakopita since the tender age of 12 and she had to cook dinner for her family while her parents were at work. Her hands have shaped more of these cheese and spinach pastry coils than most and she has become so well known for her deliciously thin and crisp pastries that the term "Queen of Pita" was bestowed upon her lavishly and in abundance. 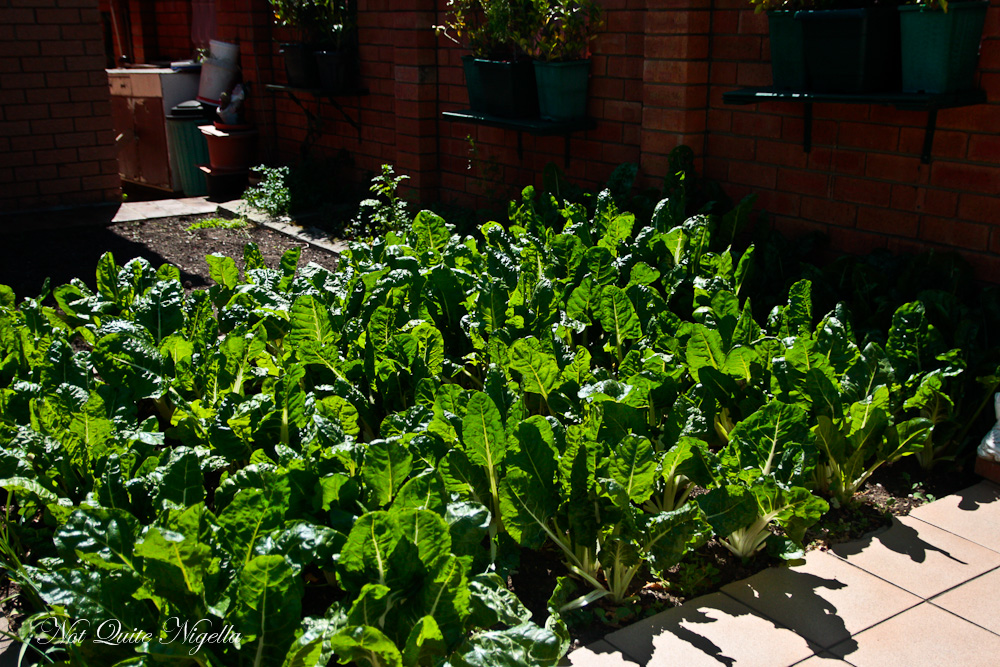 One of the first times I met Jenny she turned to me after lunch and offered me a post dessert dessert course. That is dessert after dessert. When I said that I was too full she didn't let up. "Coffee? Biscuits? I can get you biscuits!" she said before pausing and looking me dead straight in the eye and saying, "Nobody ever leaves me house hungry. Ever." 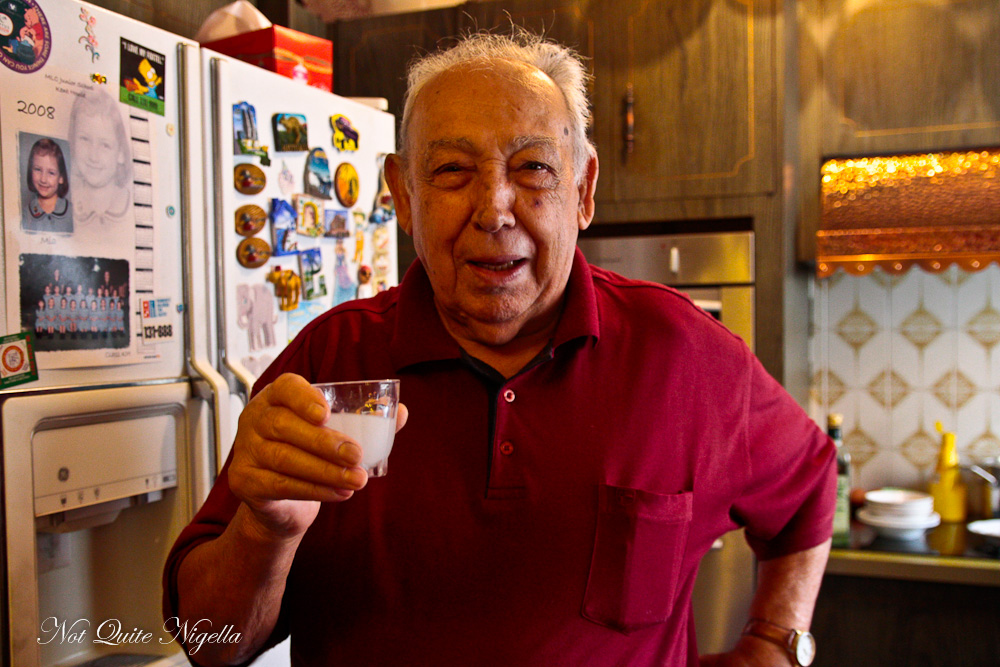 It was said in such a serious tone it was as if she were swearing revenge on a former lover. We looked out onto the vegetable garden that grows a range of herbs and greens. Jenny's husband George also preserves olives and they take pride of place alongside his home made sausages and his grand daughters Mia and Ruby. 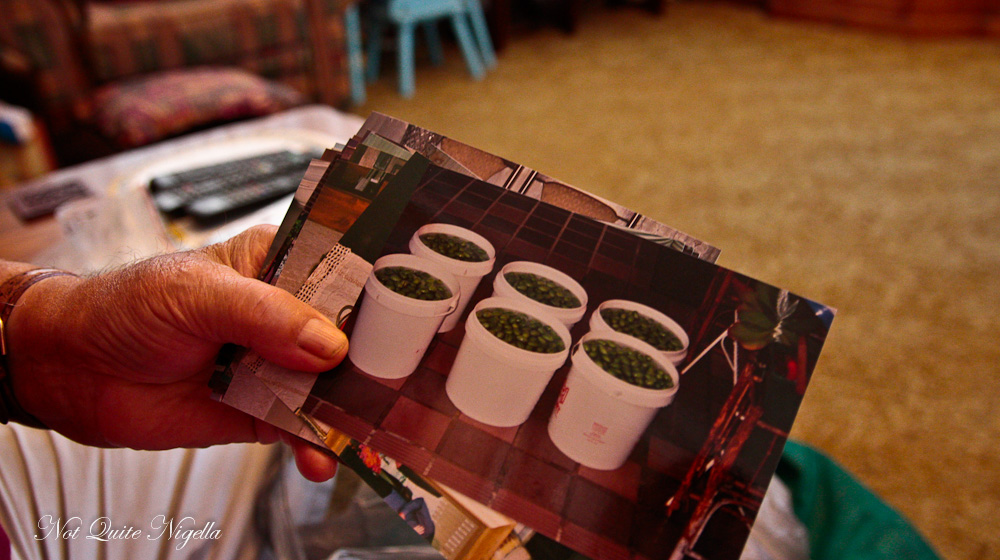 One day Jenny generously shared with me her recipe for Spanakopita. Unlike the Patsavoura that she had shared earlier, pita is admittedly more difficult as the pastry is made from scratch. I promise that it is not impossible though. The key is to have enough resting time to allow the dough to roll very thinly. Oh and also to have Jenny's recipe and tips. It's not every day that royalty shares a recipe!

I also made a video showing just how Jenny got her title of Queen of 'Pita with her magnificent spanakopita!

So tell me Dear Reader, do you have a dish that you are known for or queen or king of? And are you more an eater or a feeder? Or both?! 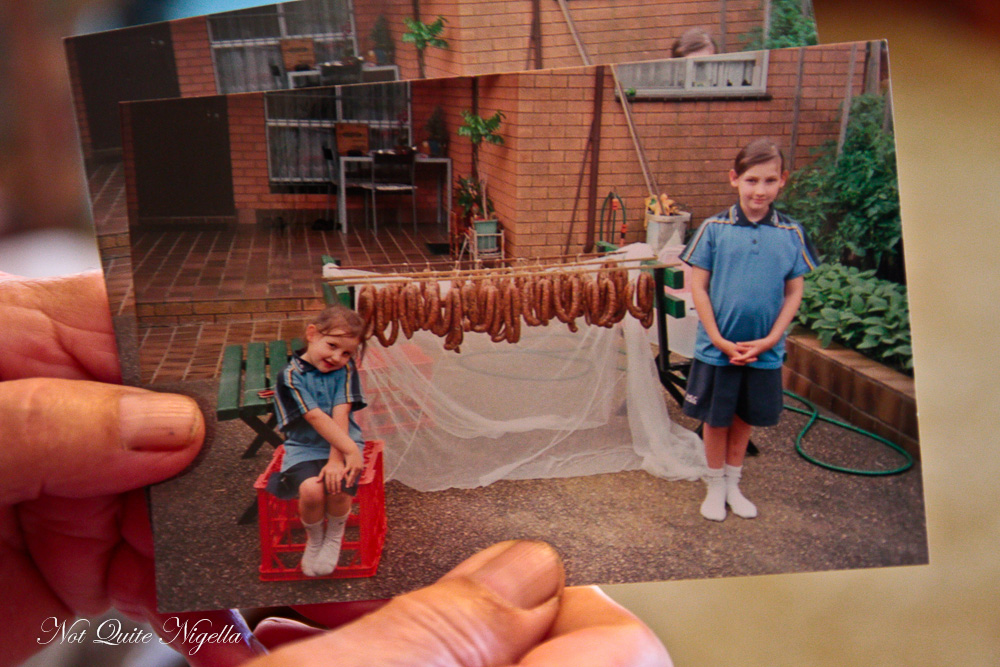 A recipe by Jenny Tsirekas

Step 1 - Mix the flour with enough water for it to make a smooth dough. Roll out into logs and refrigerate for an hour or two (or overnight). 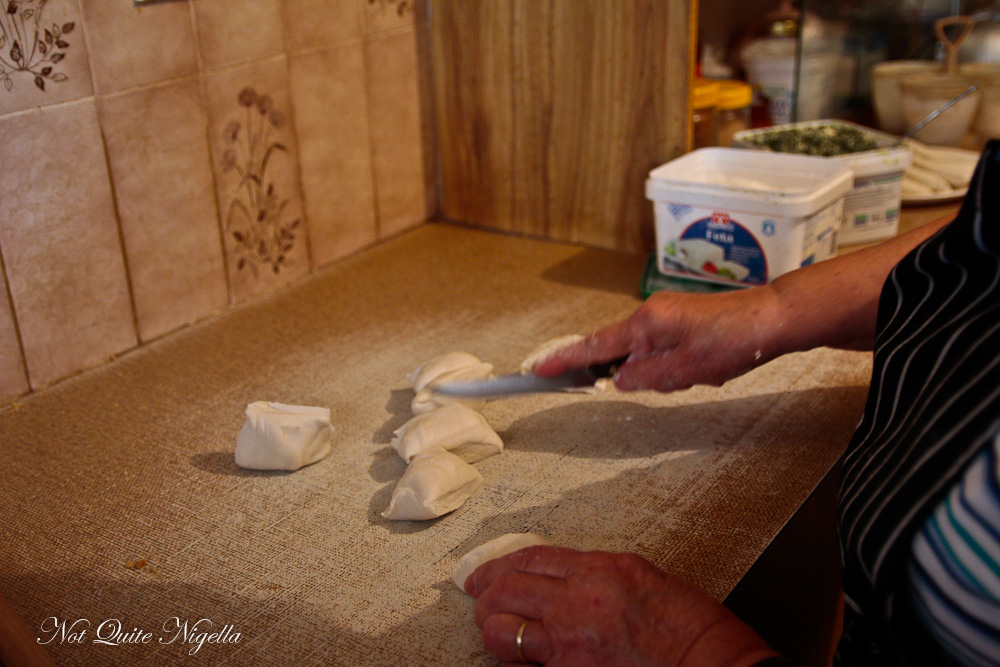 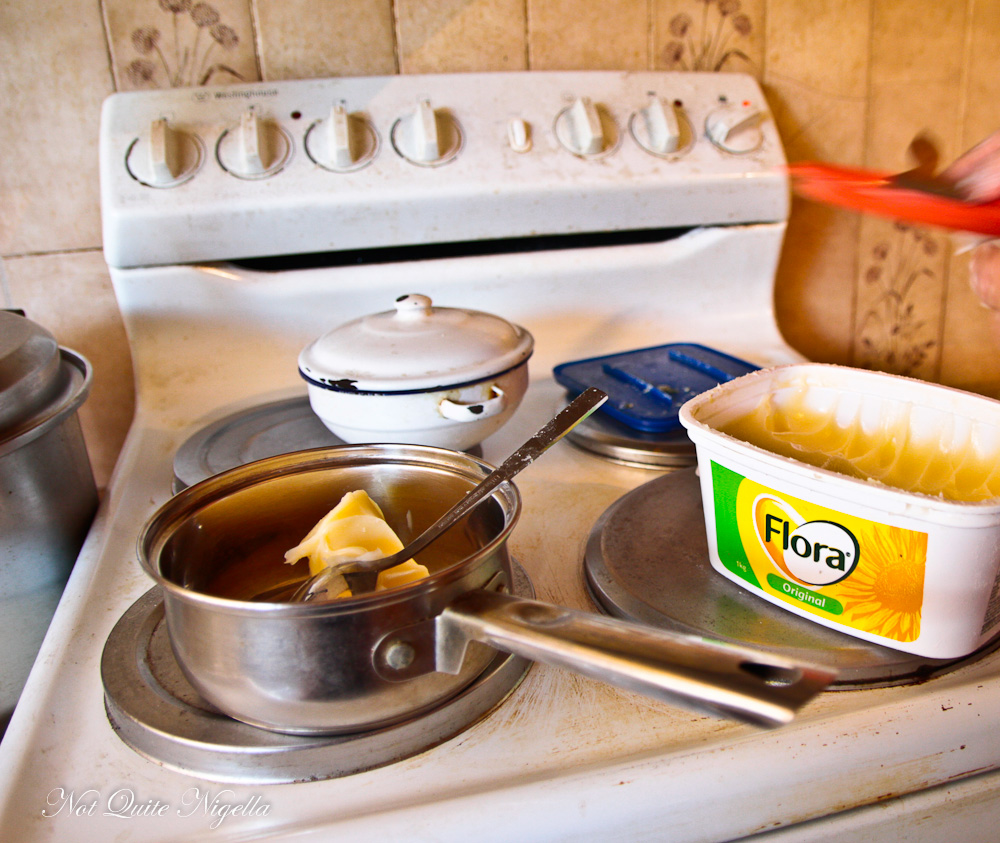 Step 3 - Cut each log into six portions and roll each out into a circle. Layer four circles on top of each other and brush with the butter and oil mixture. Allow to rest for a couple of hours so that the gluten relaxes and it rolls easier. 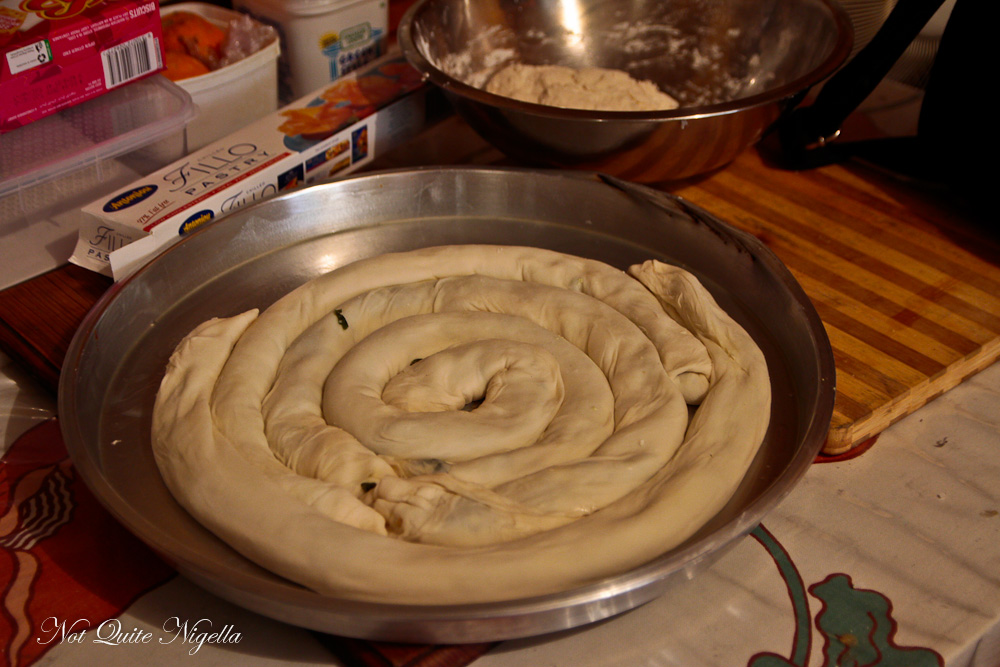 Step 4 - Grease a large round baking tray. Roll out the stack of four rounds to make one large, thin rectangle making sure to flour generously to prevent the dough sticking. Jenny uses a portion of wooden curtain rod for her roller. Fill with some of the spinach and cheese filling and roll up into a long log and place it in the tray starting a coil at the centre. Repeat with the rest of the dough and filling. Bake at 220C/440F for 20-25 minutes or until golden. 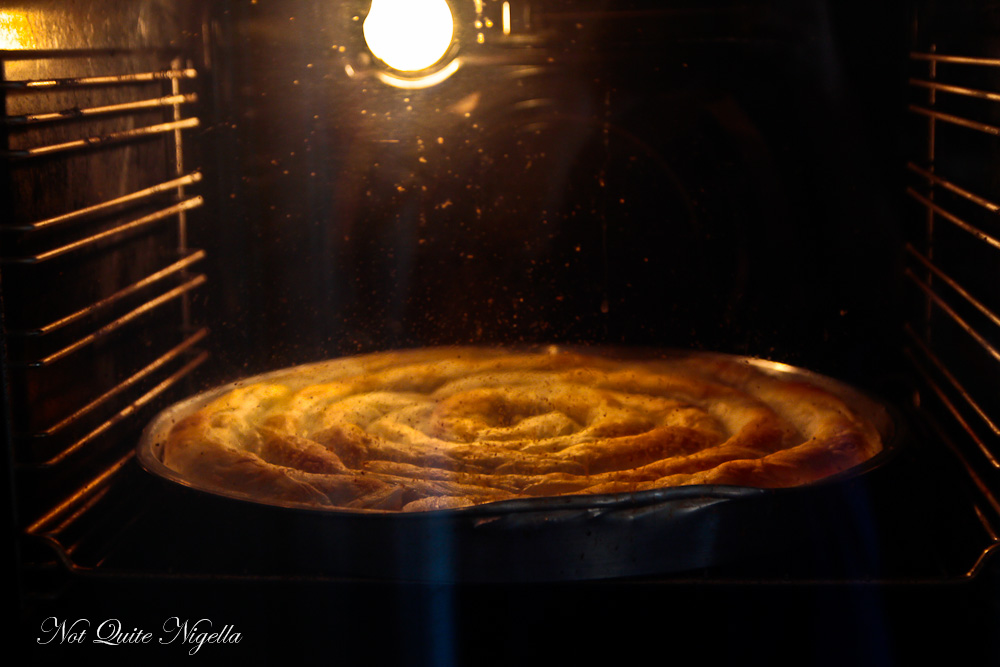