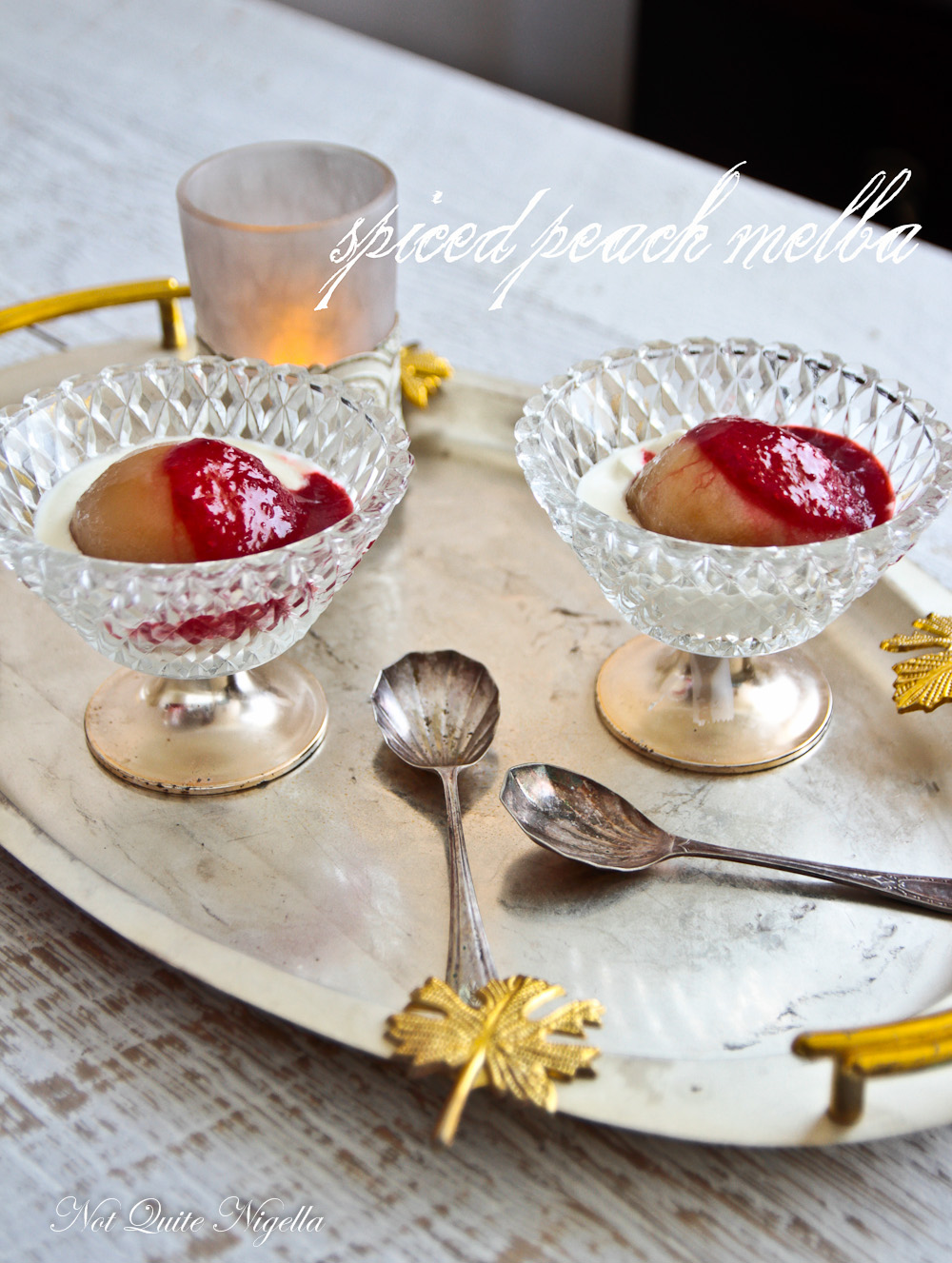 *A gorgeous yet simple dessert, a Peach Melba created by Auguste Escoffier to honour Dame Nellie Melba is ideal for the make-ahead cook that simply wants to put the components together and serve. Current season white peaches are poached in a spiced syrup heady with star anise, cinnamon, clove and vanilla and then drained and chilled. They are served on a layer of thick cream or vanilla ice cream with raspberry sauce. *

Dear Reader, are you freaking out as much as I am? Because the other day I did something really quite normal and regular, I looked at the calendar. And like a cartoon character my eyes bulged out of their sockets (okay, not quite) but they did figuratively and I almost needed a lie down. It's February already? 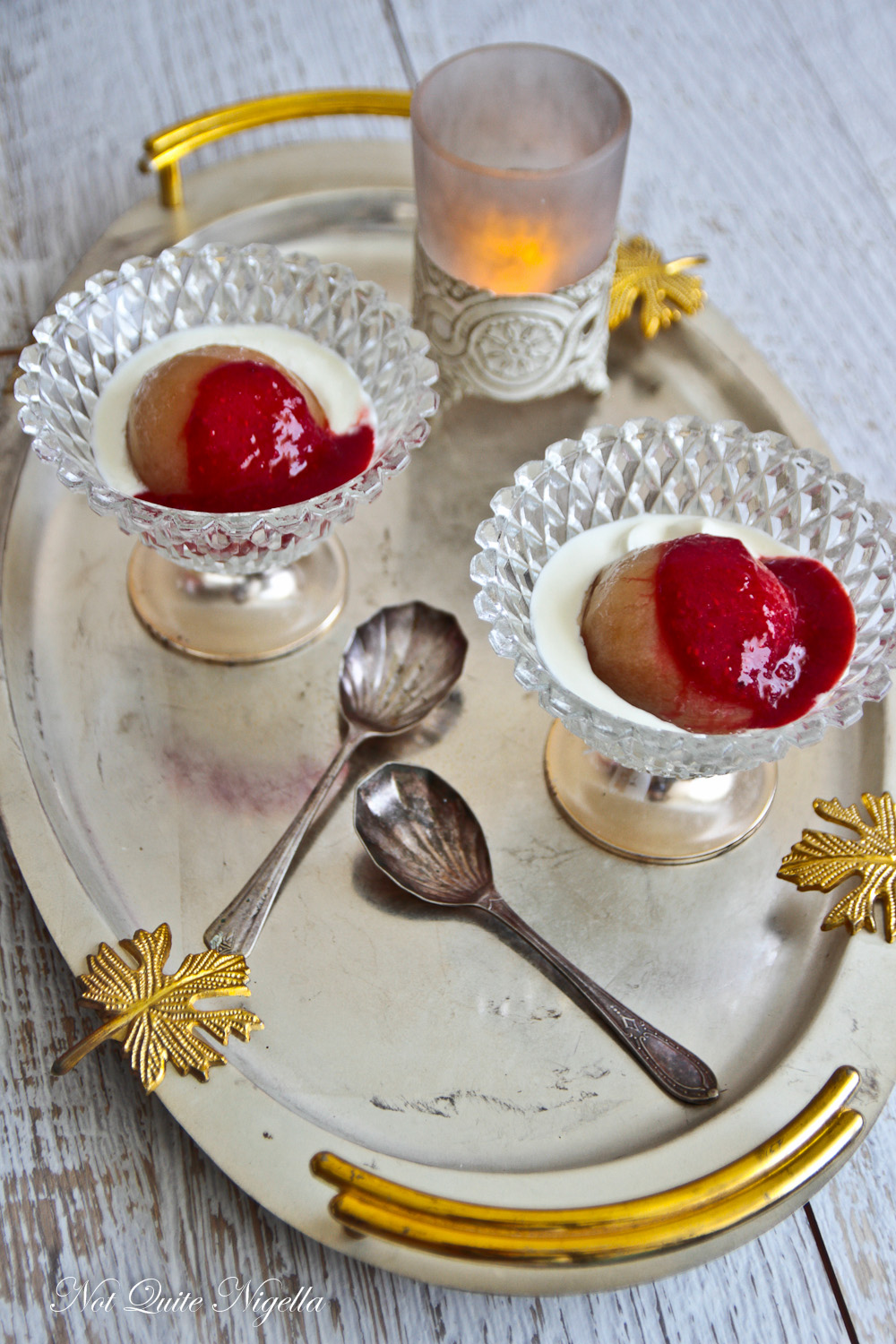 I was sure that we were still in January, that NYE had just happened and that we were all just getting back into the swing of things. I was still wishing people "Happy New Year" for goodness' sake! 2014 went by at a lightning pace and it seems 2015 is no different. But a new month also means a new In My Kitchen hosted by Celia from Figjamandlimecordial where we show you what is new in our kitchens. 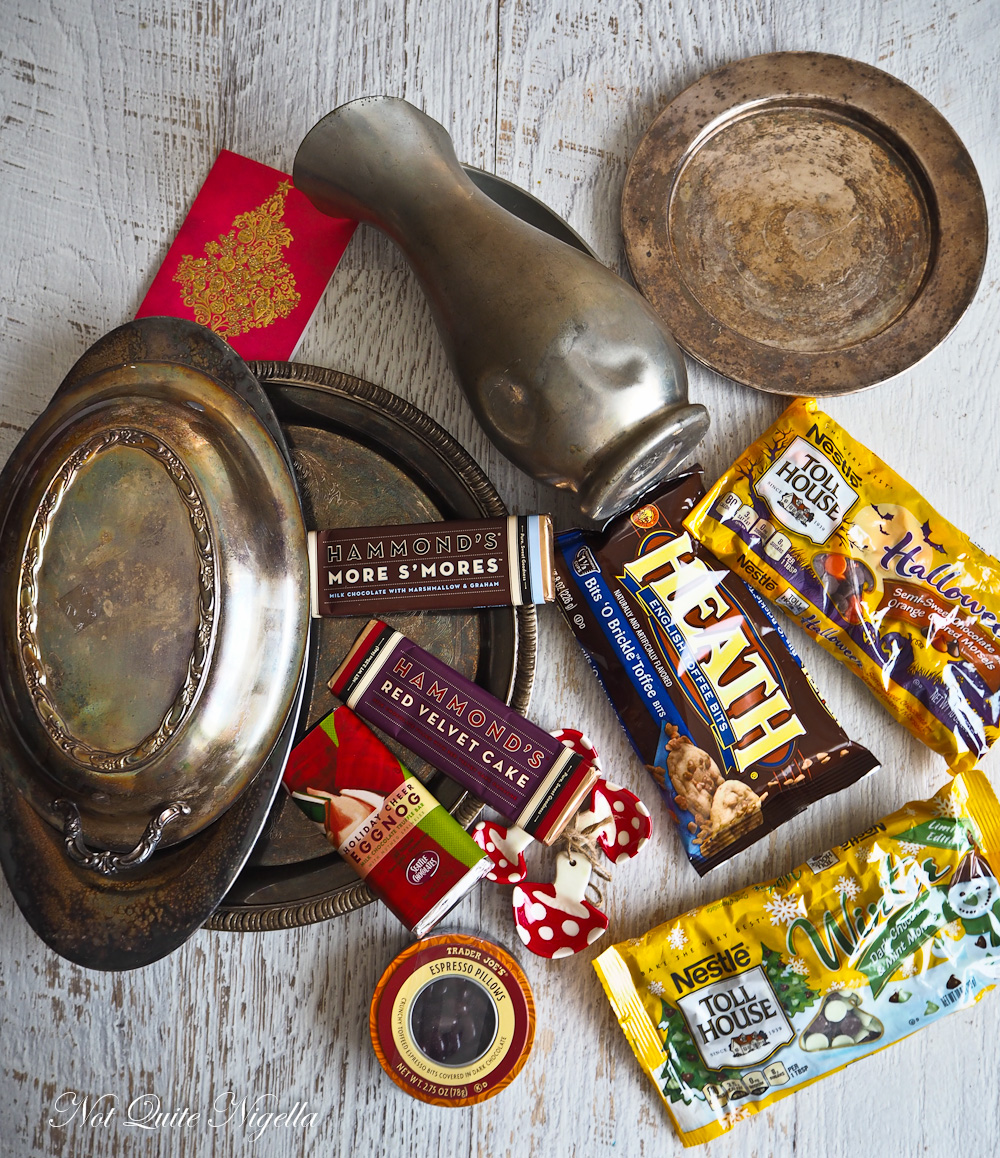 First up is a package I received all the way back in December from my lovely friend Faith from Anediblemosaic. We've been blogging buddies since our blogs first began and every Christmas we send each other a package mostly of props because we both know that food bloggers absolutely love new props. There also some candy thrown in too. She knows my taste so well and I got so excited opening up this box! I especially love that pewter jug and plates and those espresso chocolates disappeared faster than you could say "hello!". 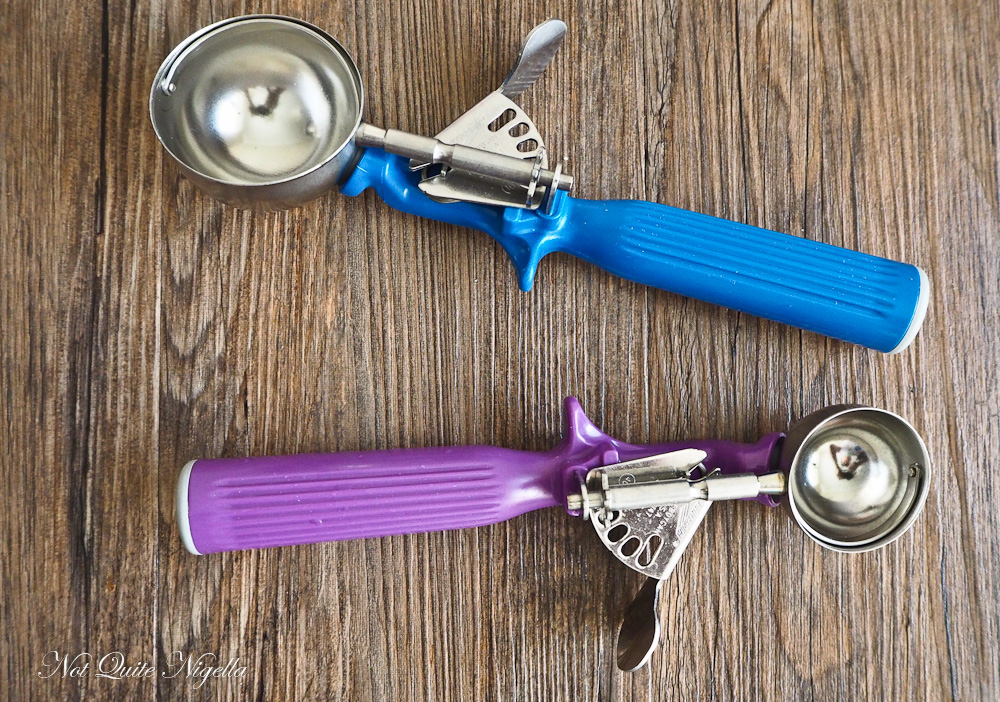 Next up is a gift from my adopted mum Barbara from Barbarabakes. Now the thing about adopted mums is just how intuitive they are about things. She watched my video making pumpkin muffins and sent me over two ice cream scoops which are so perfect for scooping muffin or cupcake batter. I've used them so many times since and to think I didn't have one before. So handy! 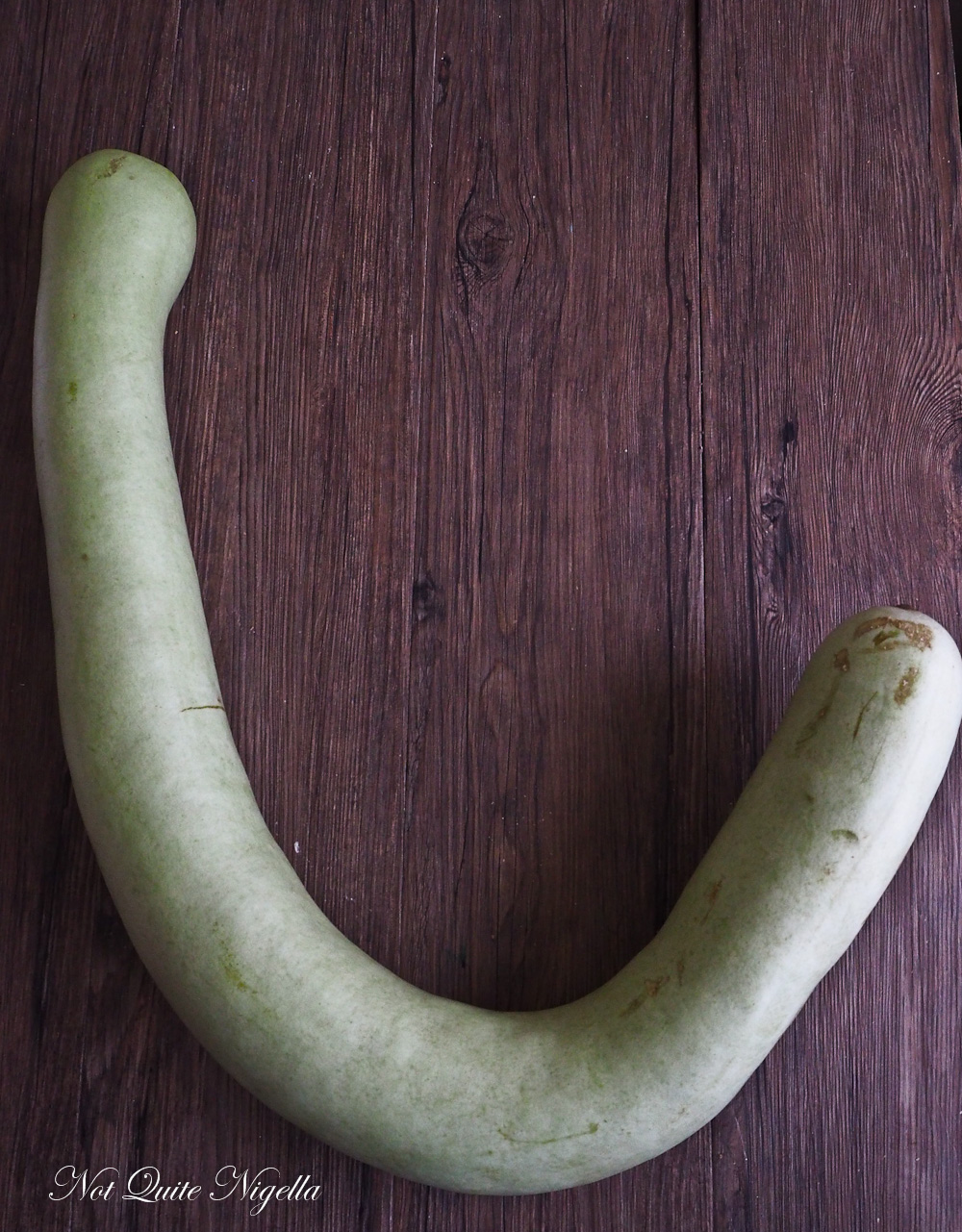 The next item is an Italian melon and if the picture doesn't depict how large it is, it was like a giant boa constrictor. I was reminded of that time that Britney Spears had a python around her neck on stage and I went around with it around my neck saying, "It's Britney b*h!". Alas nobody knew of that moment and I was that strange person with a melon around her neck... 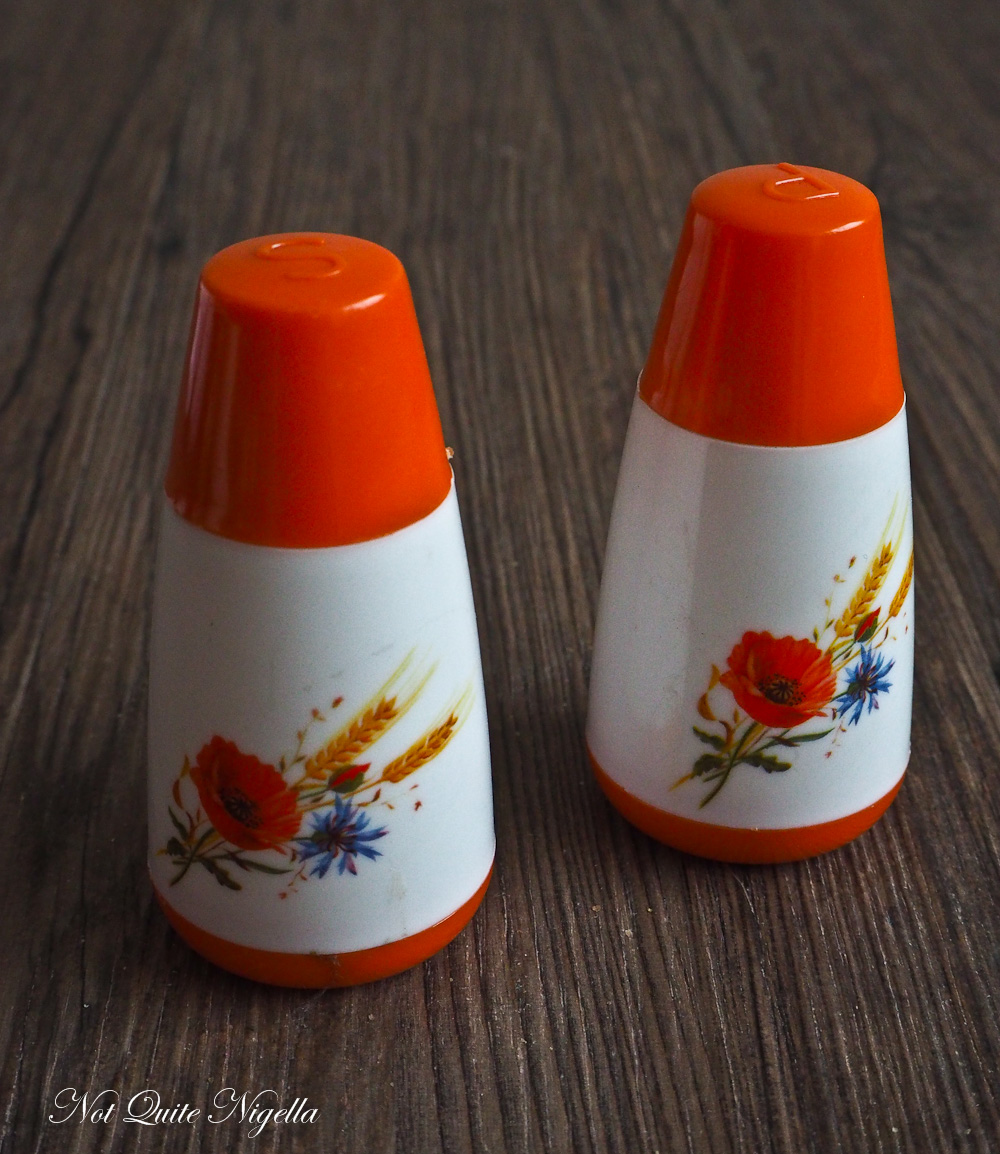 One day Belinda and I were out to lunch when we spotted a second hand store across the road. After getting hit in the face with one of their dresses hanging up and flapping in the wind, I went straight towards an orange fondue pot and these vintage salt and pepper shakers. I didn't get the fondue pot owing to the fact that I know I'd use it once if that but these were too cute to pass up. 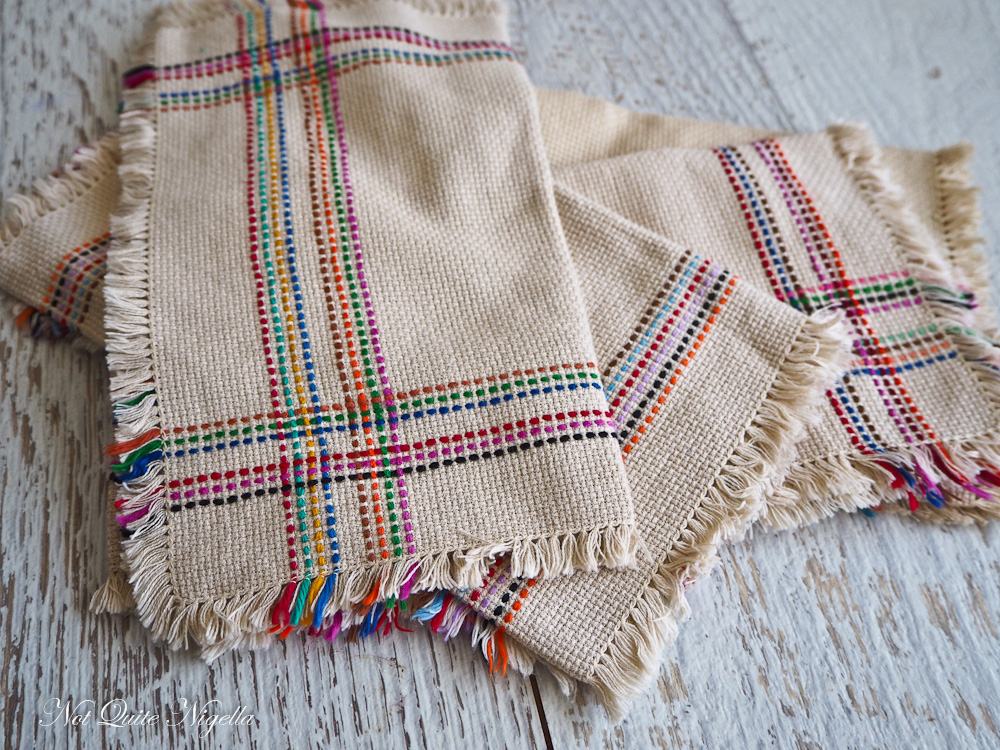 The next items are from my mother. We grew up using these in various ways but mostly as a trivet. They're still in perfect condition, particularly given the usage and years and they were done by hand by my mother. 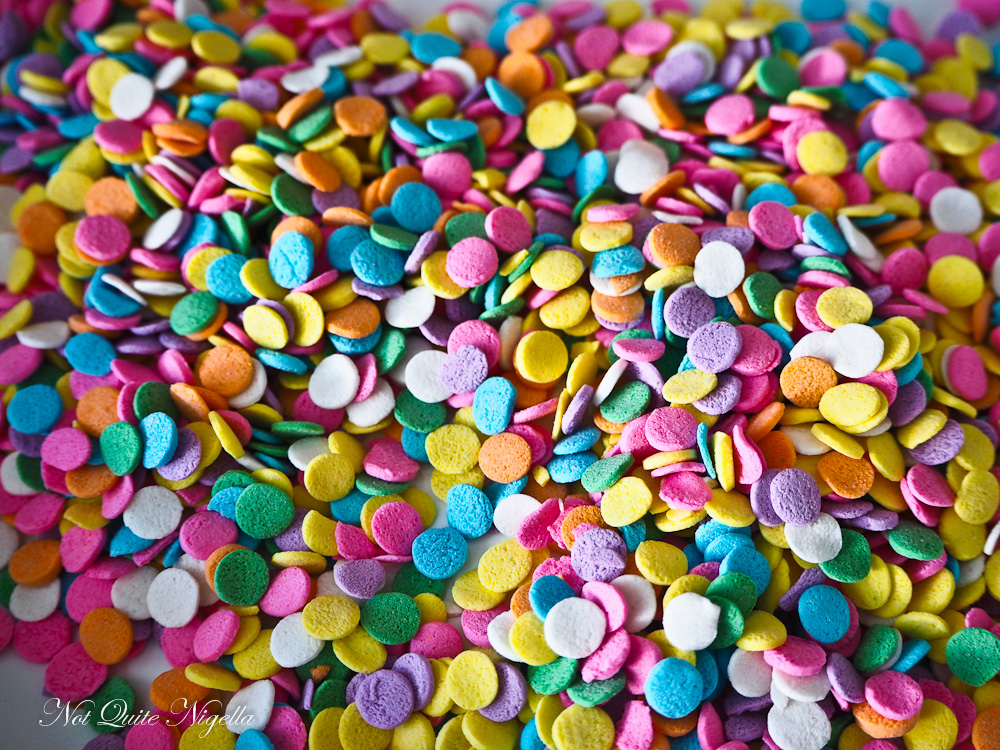 I also have these confetti sprinkles. I have all sorts of sprinkles in my cupboard but it occurred to me one day that I didn't have confetti ones. I considered making my own but then thought better of it and ordered them online instead. I don't know what I'll do with them, no doubt they'll sit in the pantry alongside the stars, hearts, snowflakes and other shapes. 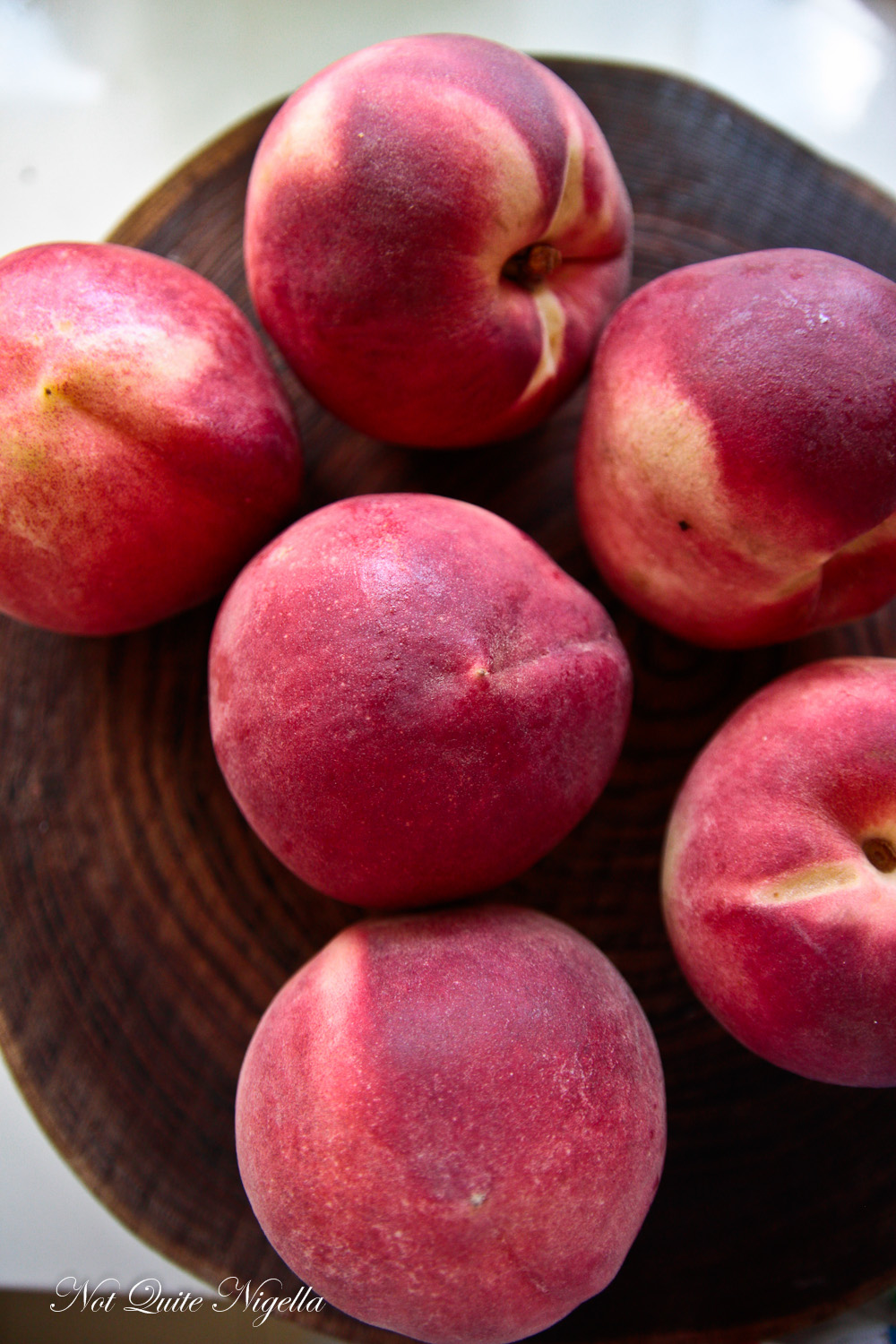 What is no longer in my kitchen are these white peaches. I bought some from the market hoping that they would ripen up quickly but they remained hard so I decided to poach them in some spices based on a dessert we had recently eaten at the Shangri-La hotel's Altitude restaurant. I'm sure they did some more magic to them than I did - I treated them simply and simmered them in a fragrant mix of cinnamon, star anise, clove and vanilla and then I decided to serve them to Mr NQN as a spiced peach melba.

It's a very easy dessert and one where you'd almost think was too easy for the amount of pleasure that you gain from eating it. The spices are given that extra gentle push nd the raspberry sauce and icecream (or yogurt, we ate them with both) are really just a matter of spooning it in and eating. You could even omit the raspberry sauce for a non Melba version because of course peaches and cream are a delicious combination in themselves.

So tell me Dear Reader, did you know that Britney moment? Is this year going quickly for you too? Do you have any exciting in your kitchen? 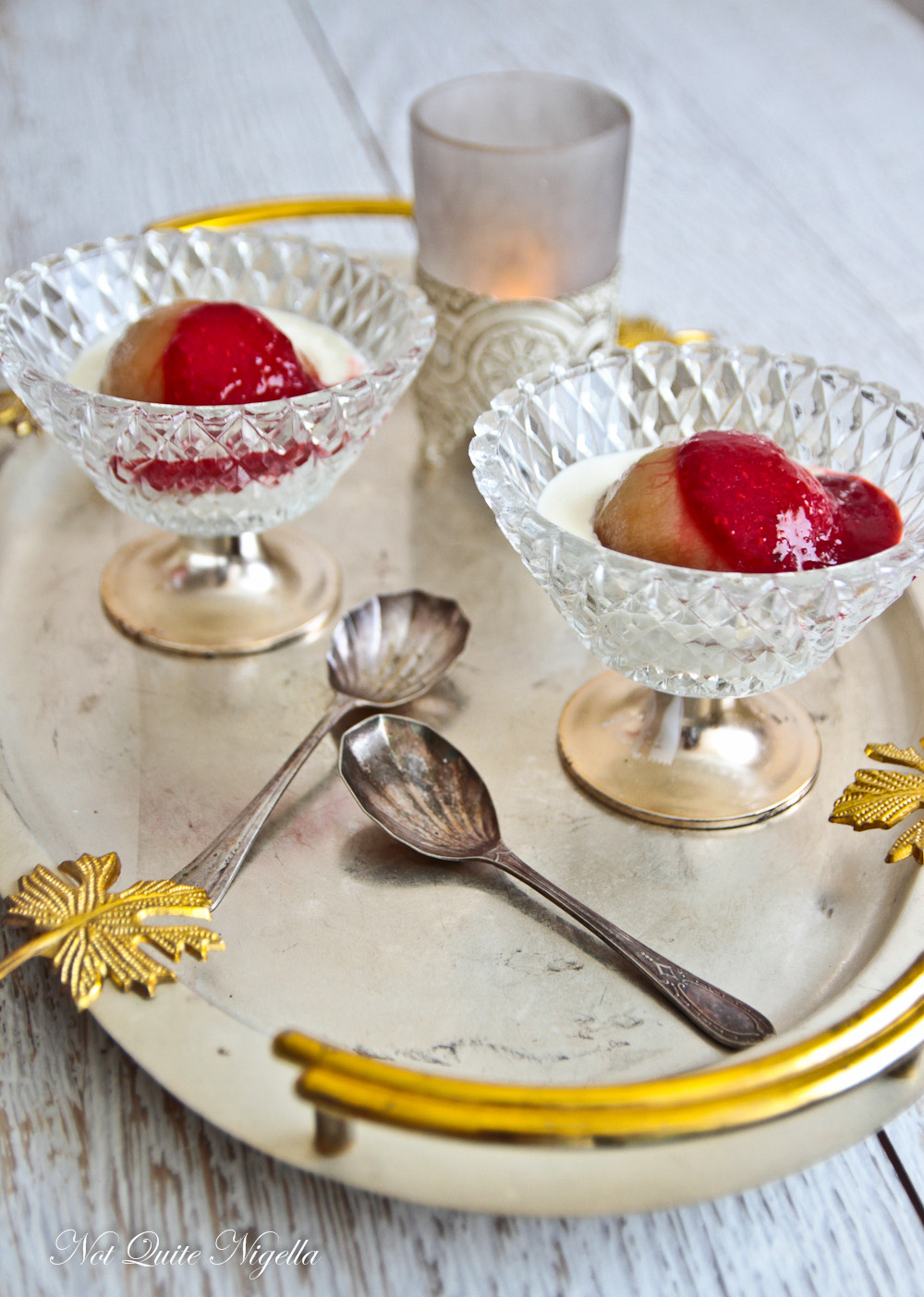 Step 1 - Simmer the sugar, water, star anise, cinnamon, clove and vanilla for a few minutes until the sugar has dissolved. Cut peaches in half - you don't need to remove the pip now if it is hard to get out, it comes out easier once they are cooked but remove them if they come out easily. 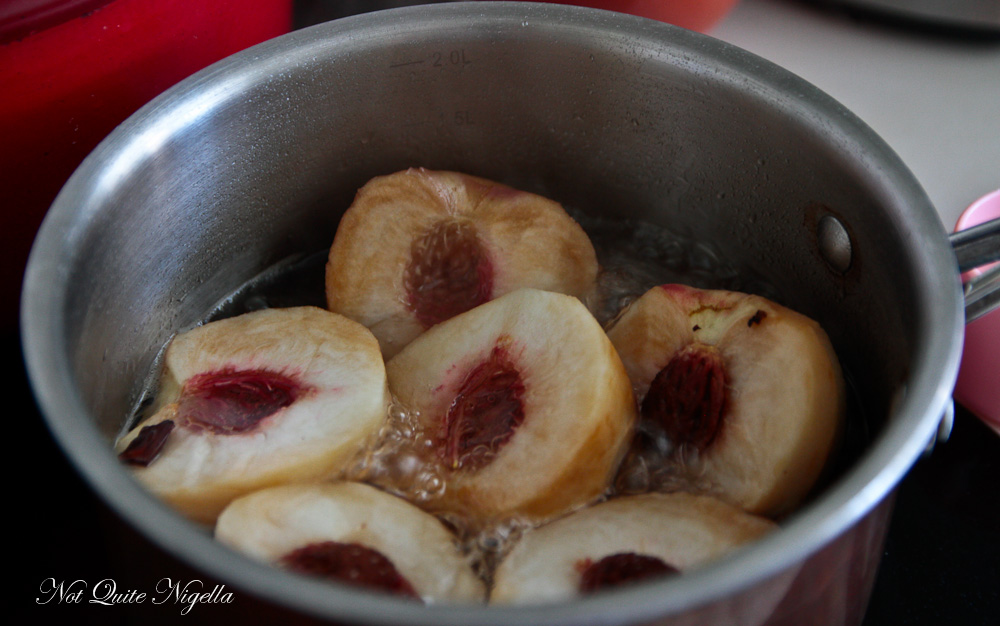 Step 2 - Simmer the peaches in the syrup for anywhere between 5-15 minutes. This really depends on the ripeness of the peaches. For ripe ones, I've simmered them for as little as 5 minutes but these were really quite crisp so this was closer to 15 minutes. You don't want them to fall apart though, you just want them to be luscious but not crisp or hard. Chill completely (strain and reserve syrup for drinks). I usually do this the day before and then assemble these on the day to save time.

Step 3 - Blend the raspberries, sugar and water until you get a raspberry sauce. You can choose to strain this to get the pips out if you want or not, it's up to you (and I tend to err on the side of lazy figuring that pips must be good for you).

Step 4 - Dollop some ice cream, cream or yogurt in a serving glass. Then place one peach half on top of this. Spoon the raspberry sauce over it just before serving.