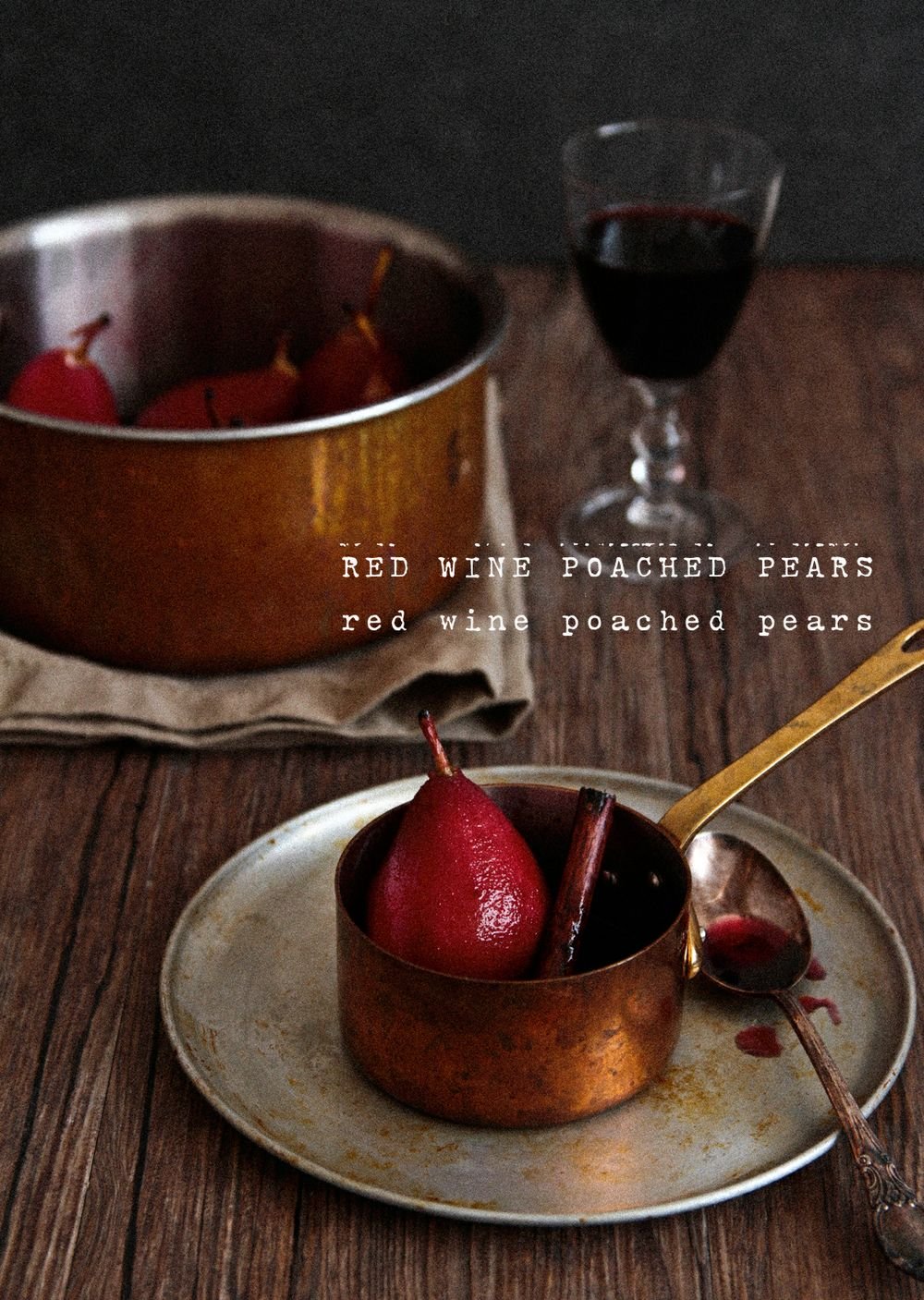 A friend of mine Freaky Flier told me about his recent flatmate dramas. His previous flatmate had left in disgrace being thrown out (it's a rather and sordid story) and when he was looking for another, he auditioned one young man who seemed eager to please but a little "different" in manner. 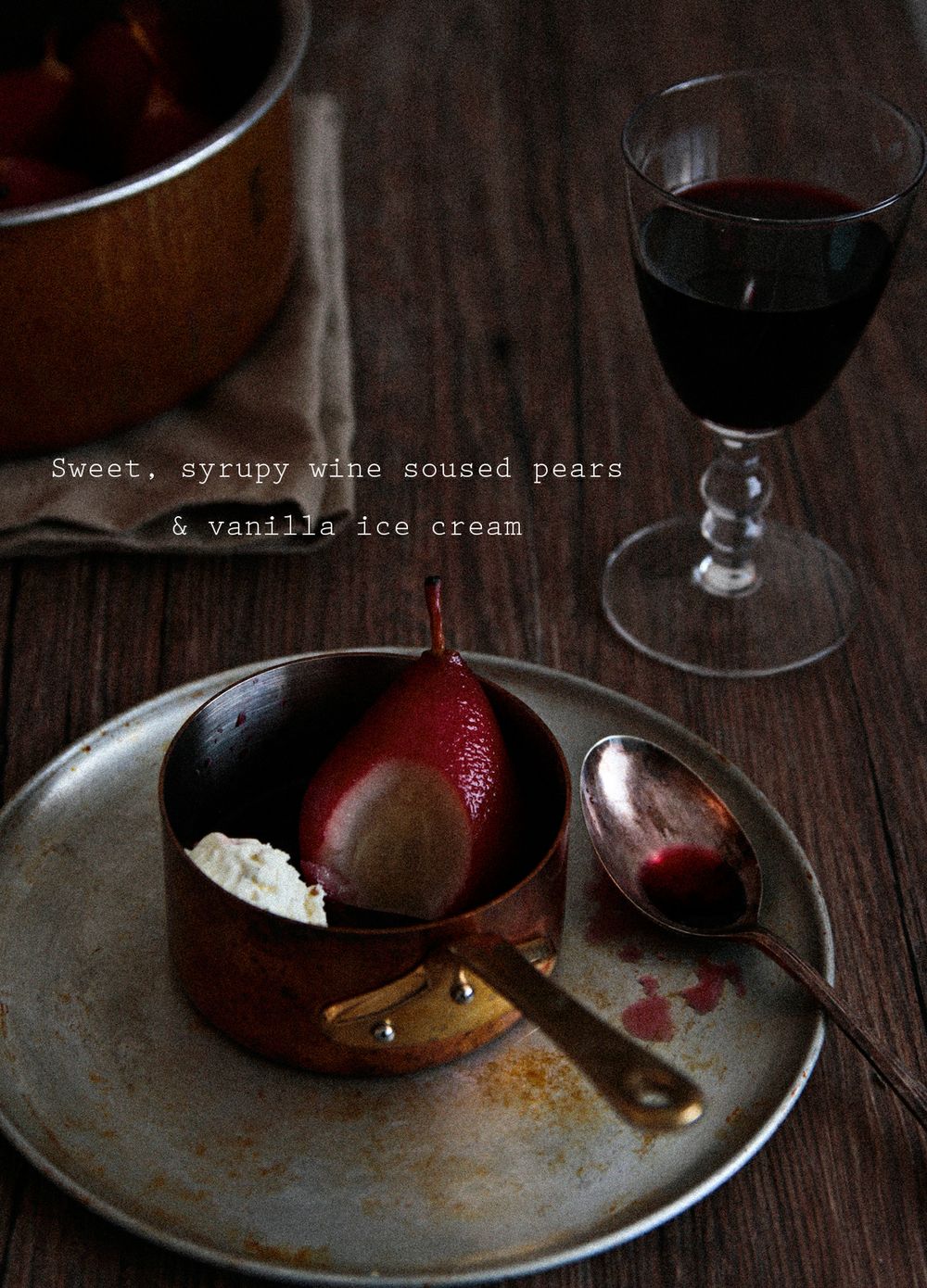 "Well he takes about four showers a day, brushes his teeth for 30 minutes and he seems terrified to turn his back to me" he said conspiratorially. "The oddest thing though is that he doesn't quite know how to empty bins and every day he throws out his garbage out of his bedroom window out of the hole that he made for himself in the fly screen!" he said laughing. Their apartment is on the second floor of a block and in the garden below are the remnants of a human life above and its assorted detritus. Other tenants had complained of being dumped on and yet his flatmate didn't quite understand why nor the whole process of emptying a bin in a bag and throwing that out. It seemed so bizarre that we were unable to figure out why he would do this. 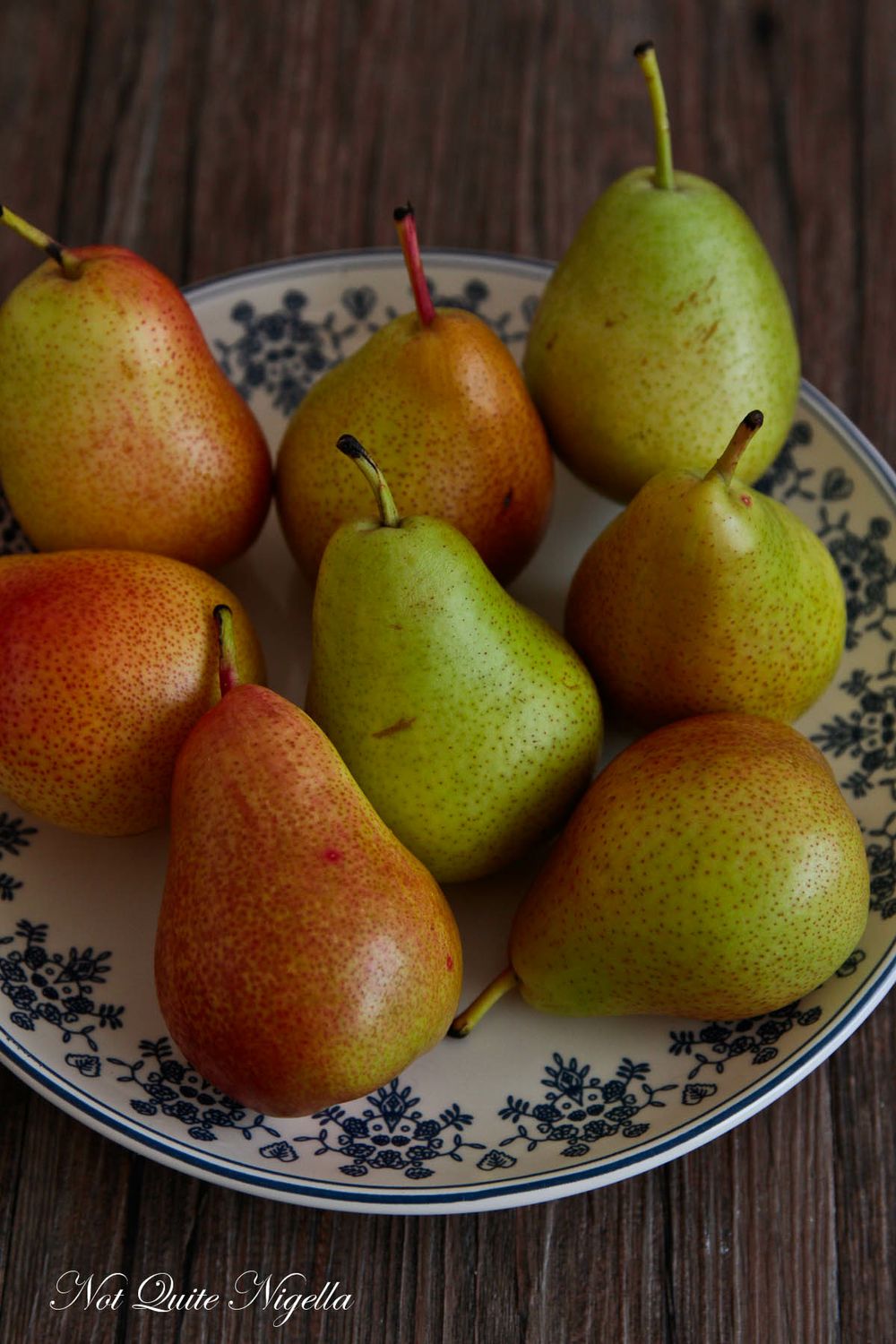 Anyway, I bought a bag of pears recently for Mr NQN's lunch. Except that he didn't like them at all finding them too hard. I'm not going to throw away a bag of perfectly good pears so I decided to poach these in red wine. It's one of my favourite desserts and I was reminded how easy it is to make these. Spicing the red wine with cinnamon and citrus zests reminds me of Gluwein, that wonderful European Winter drink and the pears that were otherwise regarded as too hard by Mr NQN took on softer, sweeter proportions and a beautiful rubied glaze. They were served with home made vanilla ice cream or yogurt.

So tell me Dear Reader, what are your thoughts on the garbage thrower? And what is your favourite winter fruit?

P.S. I was recently asked to share some pictures from our wedding with the fabulous people at Polka Dot Weddings. If you would like to take a peek you can see our wedding photos here! 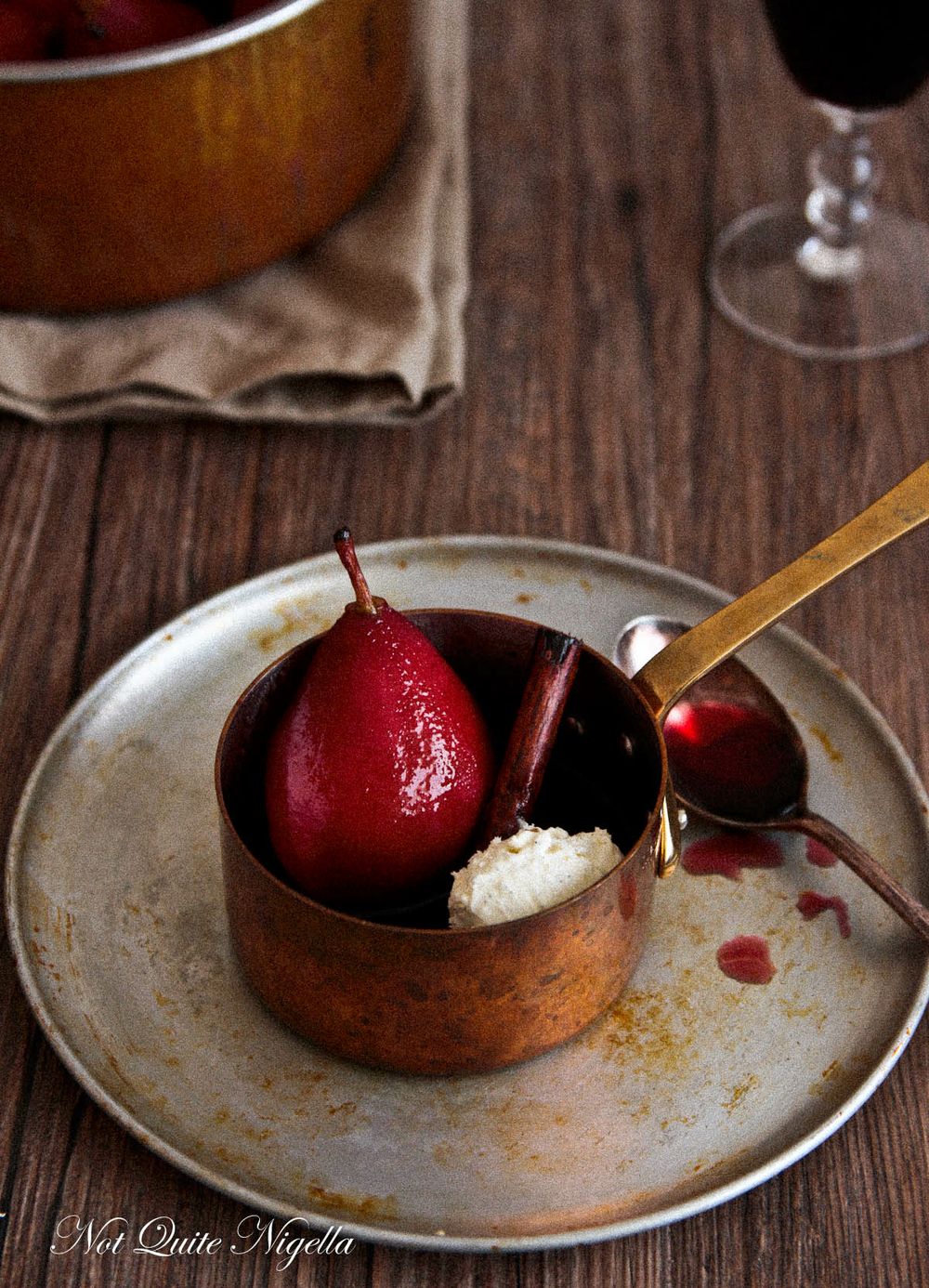 Tip: you can also add dried figs into the mix too-they taste fantastic with the cream. 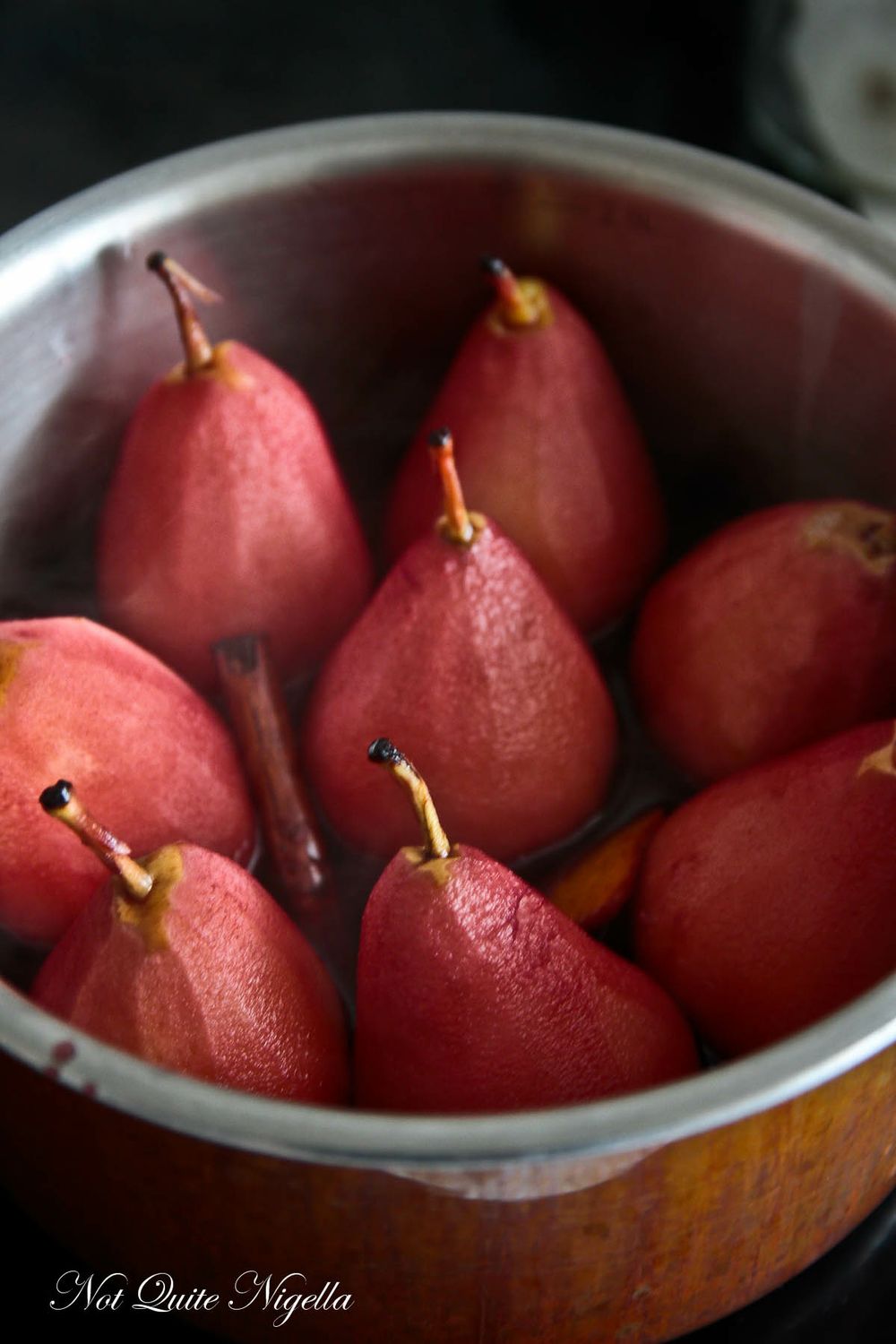 Step 1 - Place the red wine, sugar, cinnamon stick and zests onto the heat to boil in a pot that fits all of the pears snugly upright. Meanwhile peel the pears well making sure that you get all of the skin off (the skin that remains won't colour). By the time you've finished peeling, your wine should be boiling. Add the pears and cook turning three or four times for 15 minutes if Corella pears and 25 minutes if Beurre Bosc pears (check as it also depends on how big your pears are). Remove the pears as soon as they are done to prevent further cooking (you don't want them to become too soft).

Step 2 - Taste the syrup and if you want it thicker, then put it back on the boil and reduce until syrupy-anywhere from 5-12 minutes. Serve the pears with some of the syrup and the cream or yogurt. 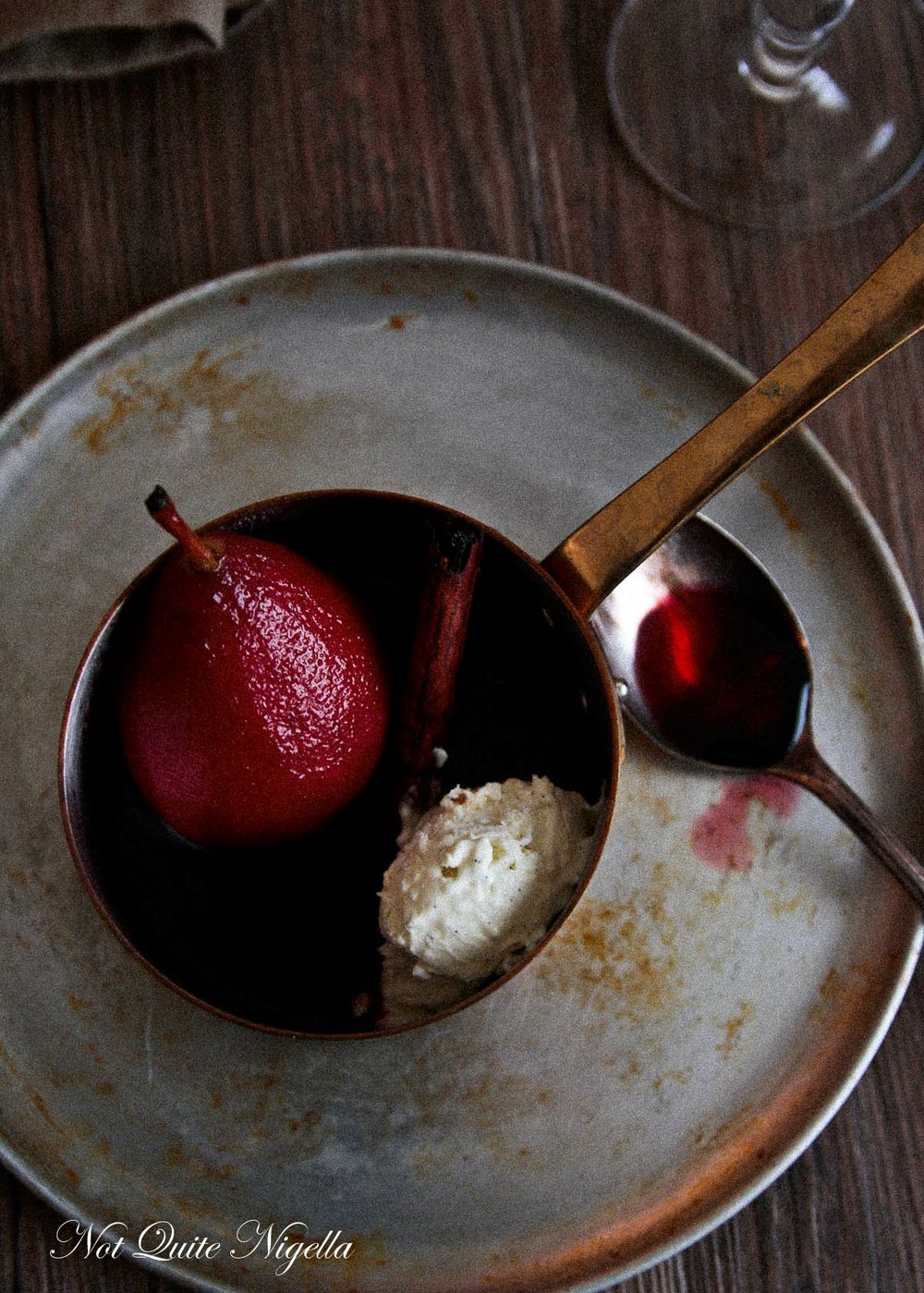