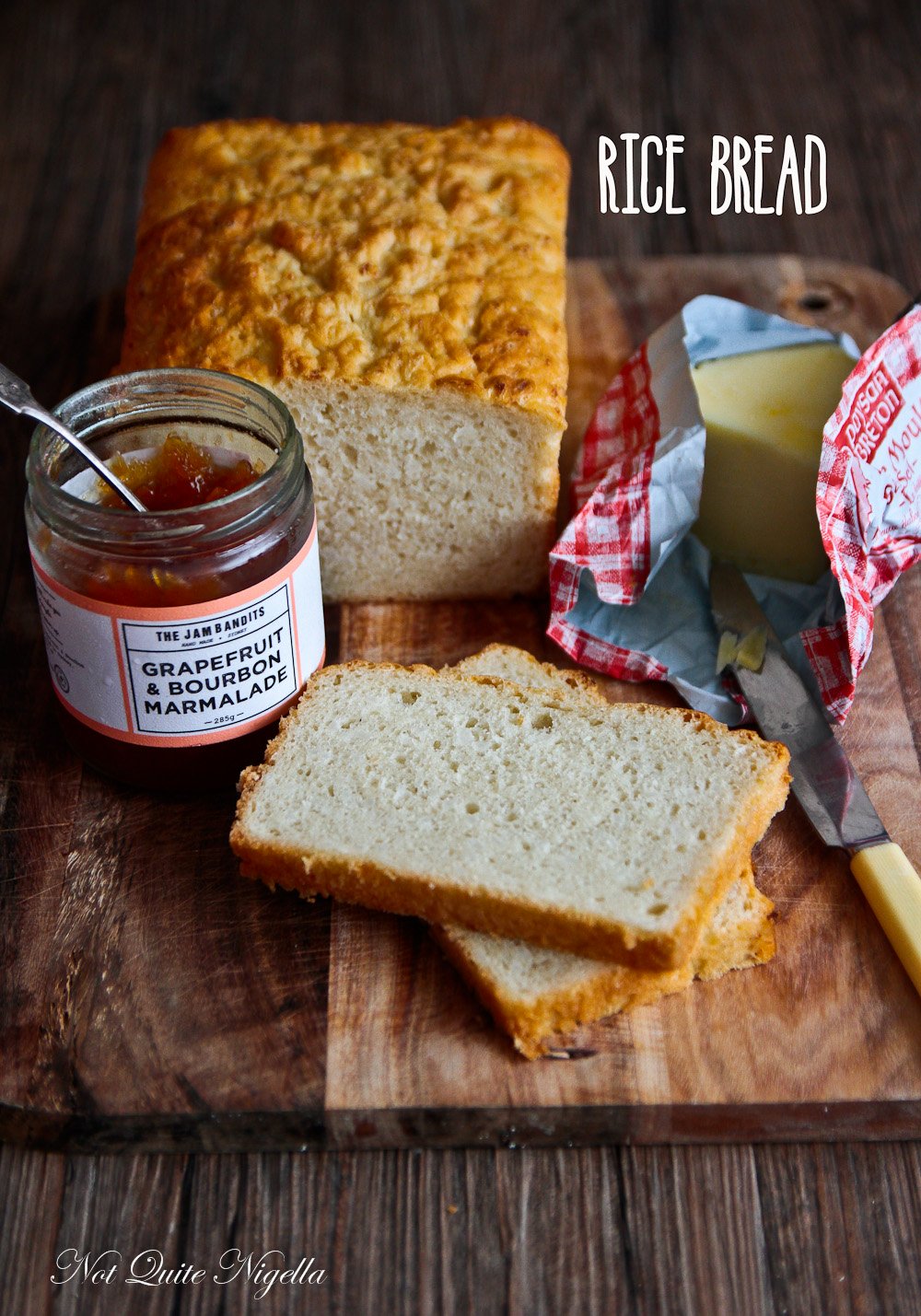 A recipe that I recently became quite obsessed with was this rice bread. From the cookbook Della Fattoria Bread by the Della Fattoria Bakery in California, it is a bread given a uniquely chewy, delicious texture with the addition of arborio rice. It's fantastic toasted or fresh and is just made for your favourite spread in the morning.

So how did everyone's Valentines Day go? Were you one that studiously ignored it, dipped your toe in it or flung yourself fully into the whole thing? Mr NQN and I don't usually go out to dinner and we usually do our own thing. This year it was the highly original (sarcasm) idea of seeing Fifty Shades of Grey. When we tried to book a special theatre to make the experience a bit more special we were offered movie packages for $150 where you got two tickets, pancakes and sparkling wine.

"What if you don't want pancakes at 4:10 in the afternoon?" I said, irritated at the profiteering for this occasion. We did find some other luxe tickets at another theatre. As for Fifty Shades, I have read all three books so I was excited to see how it would turn out. While I thought that on the whole the cast were good and it looked stunning with an obviously big budget behind it, there was something almost clinical and quite unfulfilling about the book played out in film. I found myself fidgeting and checking the time a couple of times. Also whilst he was ridiculously handsome, Jamie Dornan's Irish accent was strong throughout it and quite distracting. He looked like how I imagined Christian Grey to look but didn't sound like him. 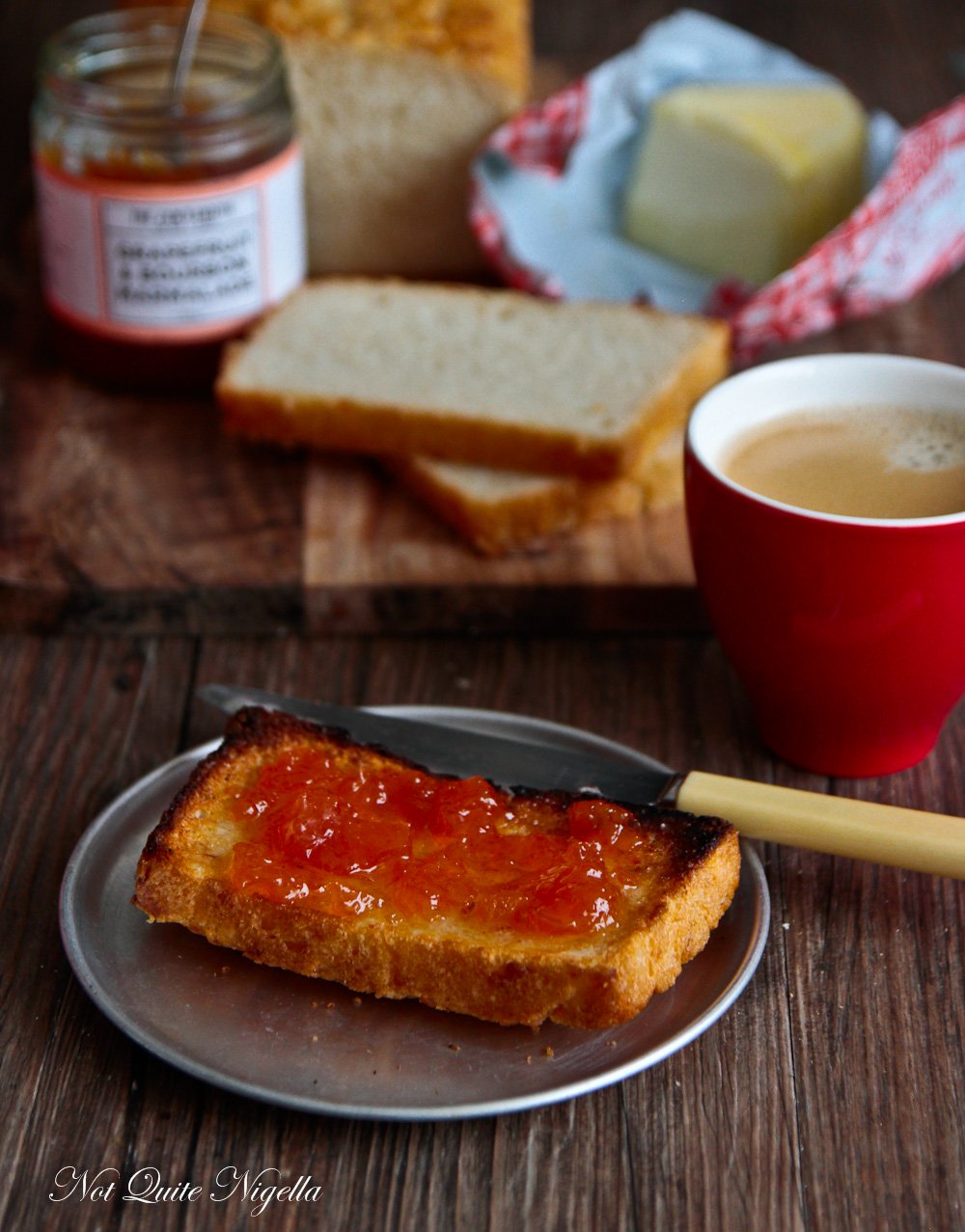 After the movie we had another idea because our interests are so disparate. This was that we would spend two hours doing whatever he wanted and then two hours spending what I wanted to do. In this case, all I wanted was for Mr NQN to watch my favourite television show with me in bed. He threatened to get me to ride around Centennial Park on my bike for two hours. I mean because we're really wild and crazy people so they were our wishes.

There weren't any heart shaped pancakes that morning but there was some of this rice bread. I had made it the day before as I had first seen it on Carolyn's lovely blog FoodGal . It's originally an Italian recipe from Della Fattoria bakery in Petaluma, California. The recipe comes from their cookbook, "Della Fattoria Bread". Their wood fired bakery is so popular that one of the first clients was Thomas Keller's "French Laundry" in Yountville.

The bread smells deliciously yeasty as it is baking. Perhaps it's a Pavlovian response but whenever I smell that familiar bakery yeast smell I start salivating because I know that something delicious will be coming out of the oven soon. And when I sliced it open when it was cooled, it was an intriguing loaf indeed. Chewy and wholesome, it had a comfort factor to it with heft as it is a dense but not leaden, heavy loaf. I've never really had anything quite like it. If I were to relate it to a food, it would perhaps be Finnish Karelian rice pies which probably doesn't help you because you may not ever have tried those. It's a bread worth making, at least once just to see what it is like. I loved it toasted with plenty of butter and jam.

So tell me Dear Reader, how did your Valentines Day play out? Have you seen or will you watch Fifty Shades of Grey? 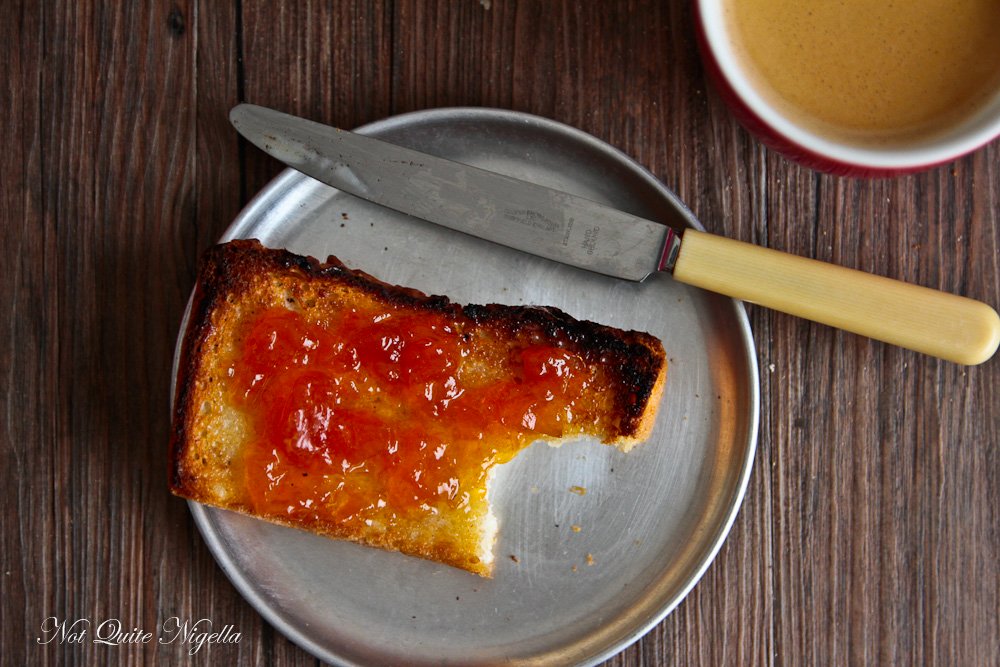 Step 1 - Rinse rice until the water runs clear (about 2-3 times) and add water. Bring to a boil and then turn down to low making sure to keep the lid on. Steam for 15-20 minutes making sure not to lift lid. Allow to cool for 5-10 minutes. 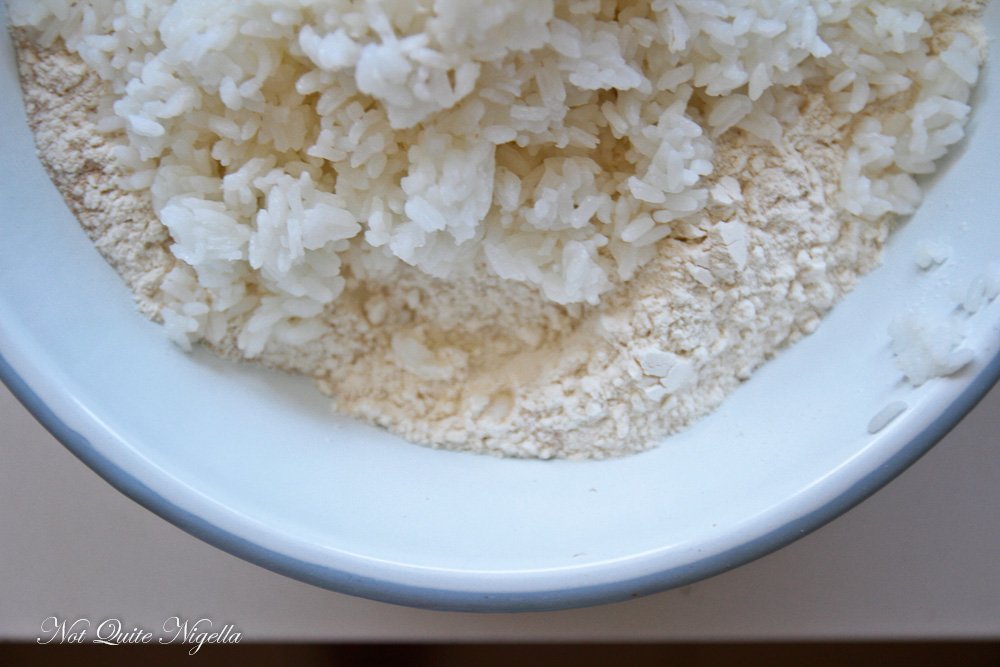 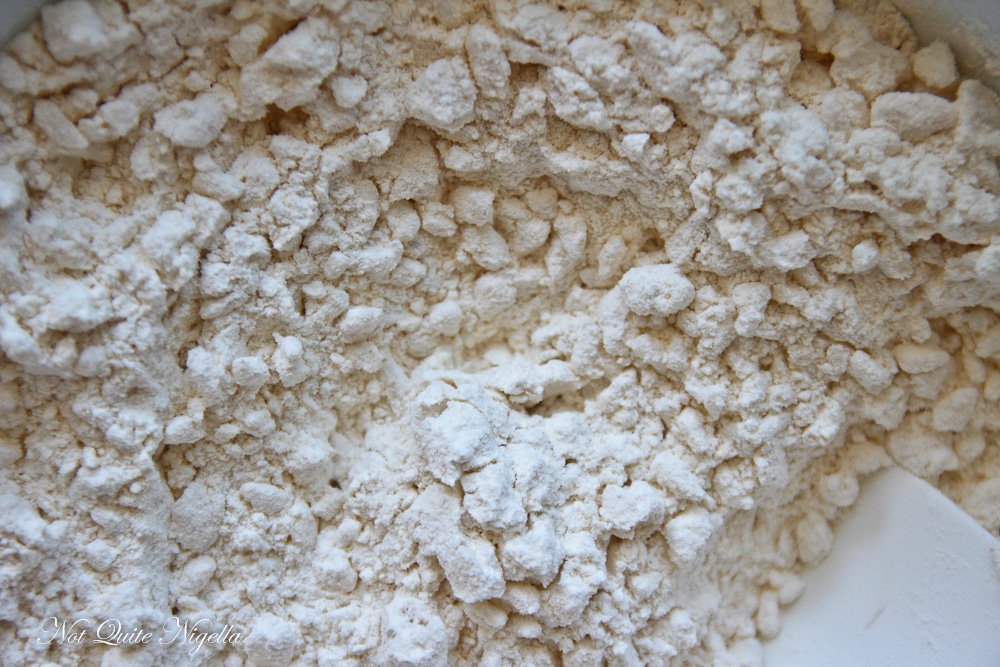 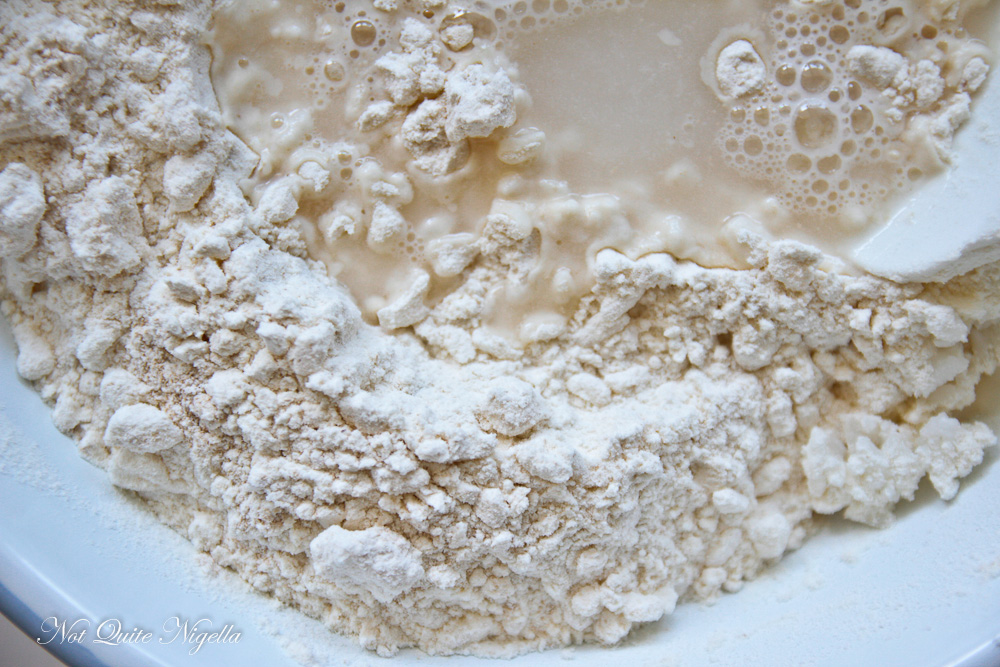 Step 2 - Whisk the flour and yeast together and add to the bowl of an electric mixer fitted with a dough hook attachment. Add the rice mixture and mix together. Then add the water and knead until elastic - about 5 minutes with the dough hook or 8 minutes by hand. 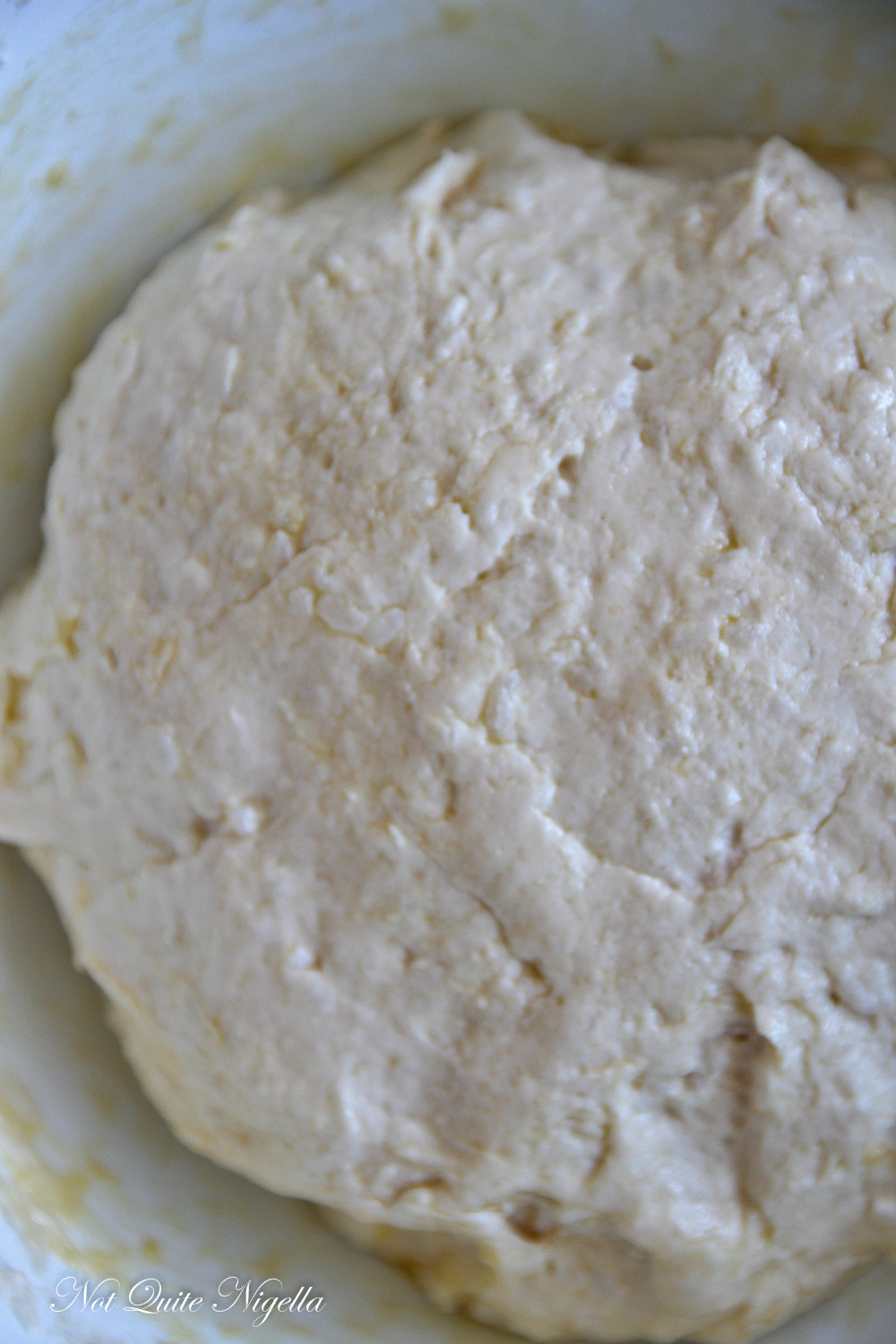 Step 3 - Grease a large bowl with oil and shape the dough into a round and turn it in the bowl so that the ball of dough is coated in oil. Cover with cling film and allow to prove until double in size. Punch down and add salt and knead for 1 minute again. 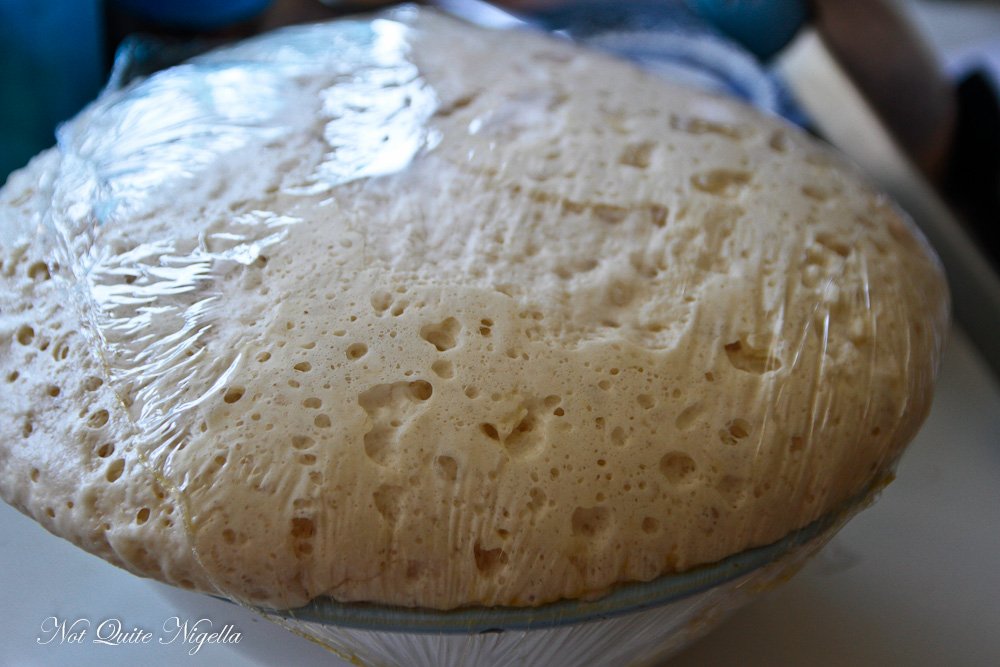 This is how the top of my jeans look after I've had too much brunch...

Step 4 - Preheat oven to 200C/400F. Grease a large loaf tin and place the dough in this. Brush with more oil and cover with cling film and allow to rise again for about 30 minutes or so or until the dough rises to the rim of the tin. Bake in the preheated oven for 35-40 minutes. Allow to cool for a few minutes before turning out of the tin and cooling it on a rack completely.