Our Oscars Viewing Party & A Home Made Version of the In-N-Out Burger With Video! 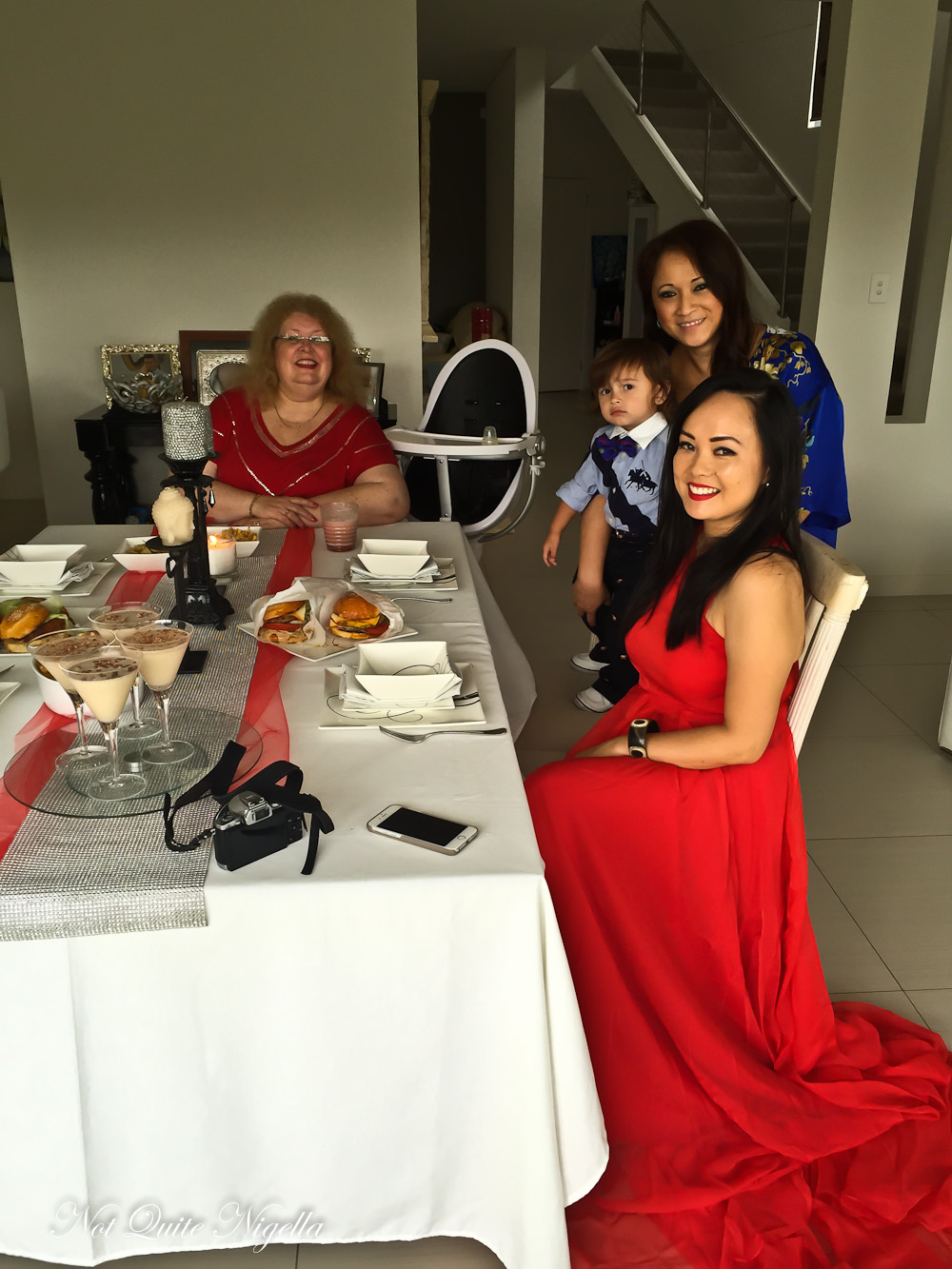 What better way to watch the Oscars than with an Oscars viewing party with a bunch of girlfriends? This year we got dressed up in our finest red carpet gowns and ate In-N-Out burgers, caviar fries, bacon & maple cinnamon popcorn, cookies & cream cocktails and cherry cupcakes!

Dear Reader, do you have a bucket list of things that you want to do? I think I have a few bucket lists. There is the serious travel and goal related one. Admittedly it's mostly travel related for me rather than goals but one goal was to play Rose Porteous in a mini series. I mean just imagine the drama! And there's another list, mainly made up of things that I've always wanted to do but have been too lazy or disorganised to do. 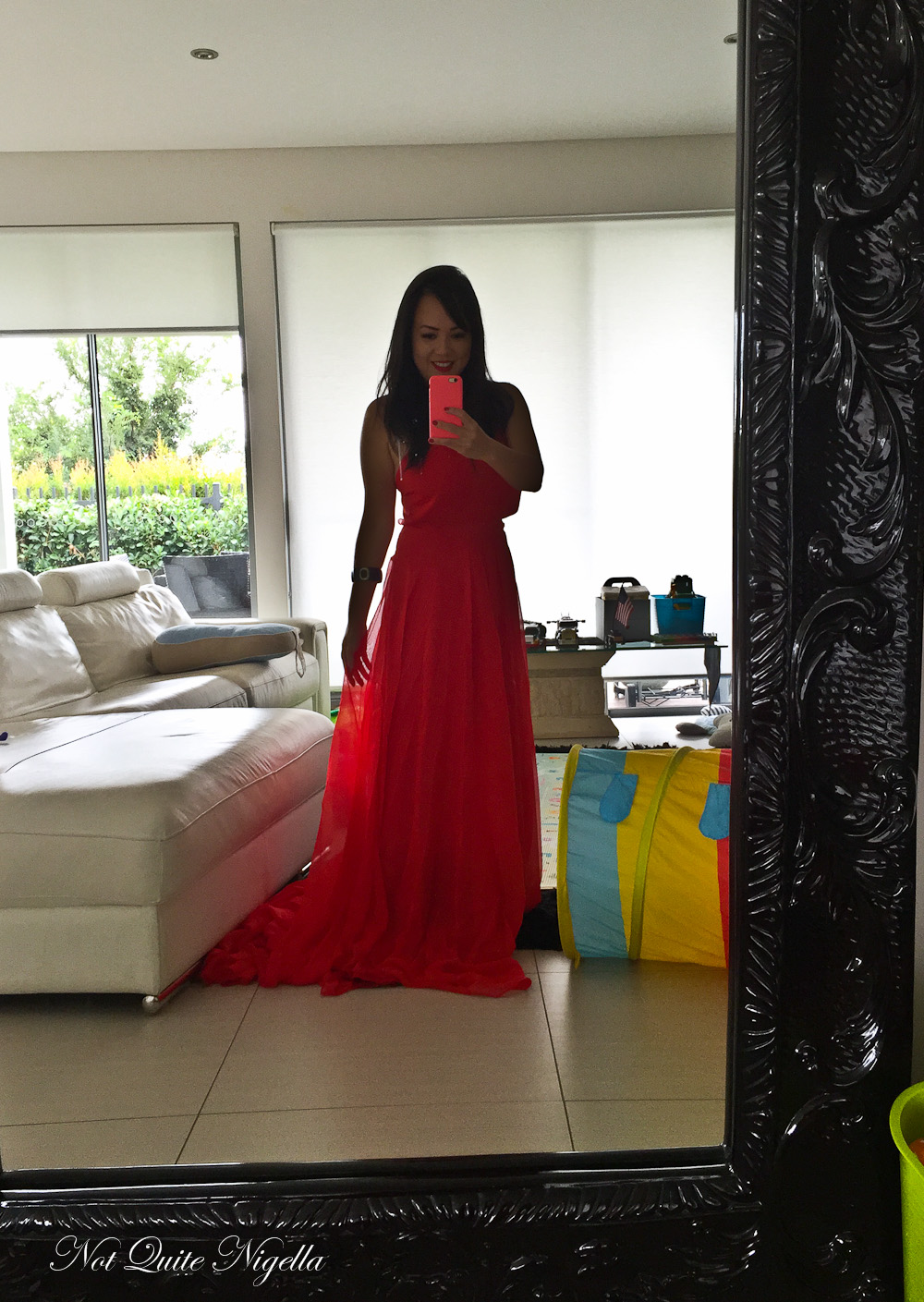 Every year the Acadmey Awards rolls around and I think, "Wouldn't it be fun to do an Oscars viewing party?". But then this year, I suggested it to Belinda who thought that it was a great idea and before we knew it, we had a viewing party planned at Joanne's house. 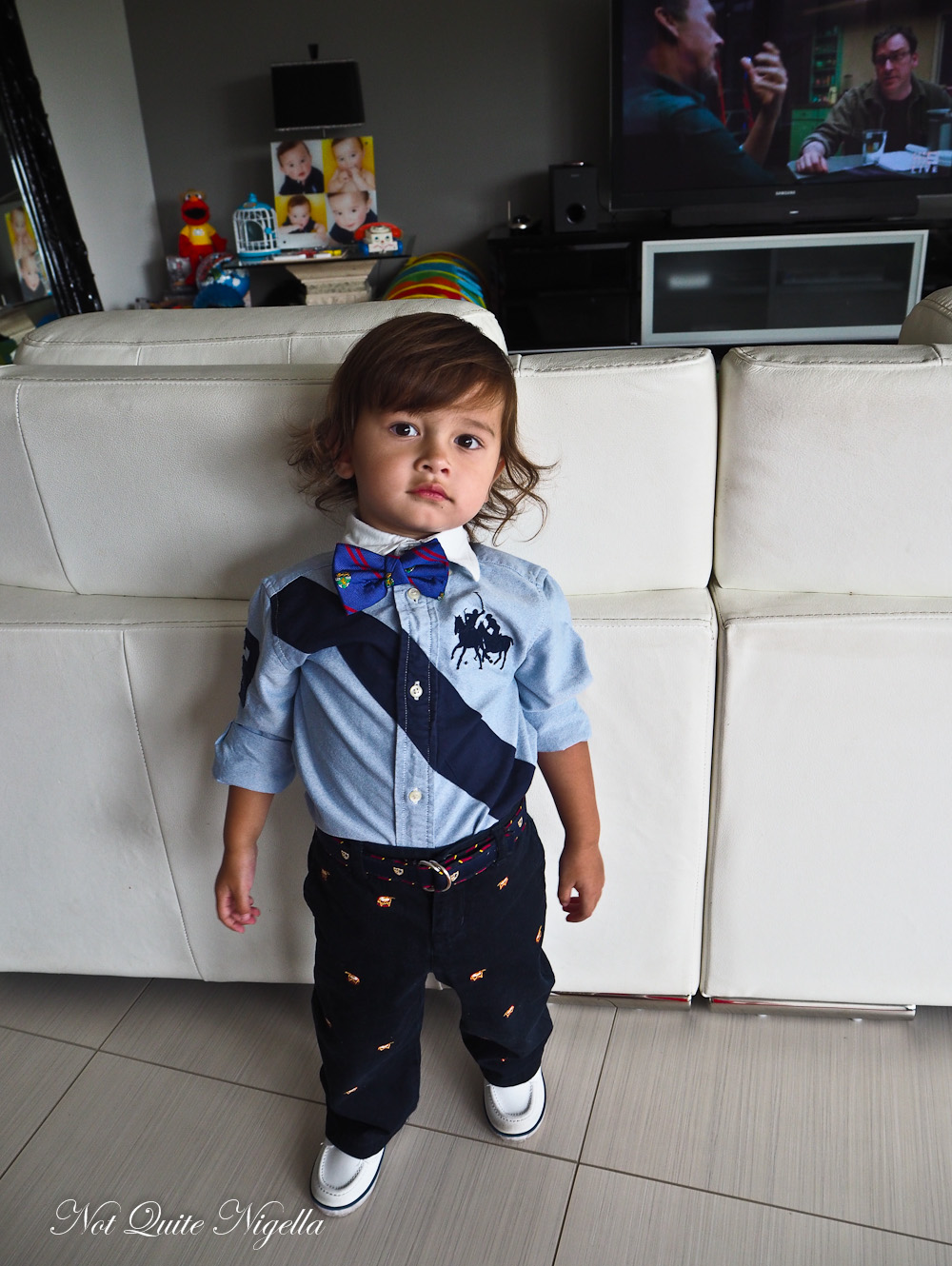 Even Xavier got red carpet ready

There was an ulterior motive for it all of course and it was a food related one. You see there are poor Hollywood folk that have to starve themselves before the ceremony because there's nothing more brutal for really rich Hollywood folk than walking down a red carpet. The idea was that we would dress up in red carpet gowns and eat burgers while watching the telecast. Eating by proxy-Hollywood we've got your back ;) Actually, we would be eating the burgers that they would no doubt be eating once the ceremony was over. I practiced an acceptance speech in my head for my performance as Rose Porteous thanking my accountant, the lady that does my nails and eventually would get around to thanking Mr NQN because as we know, some Hollywood folk forget that they're married. 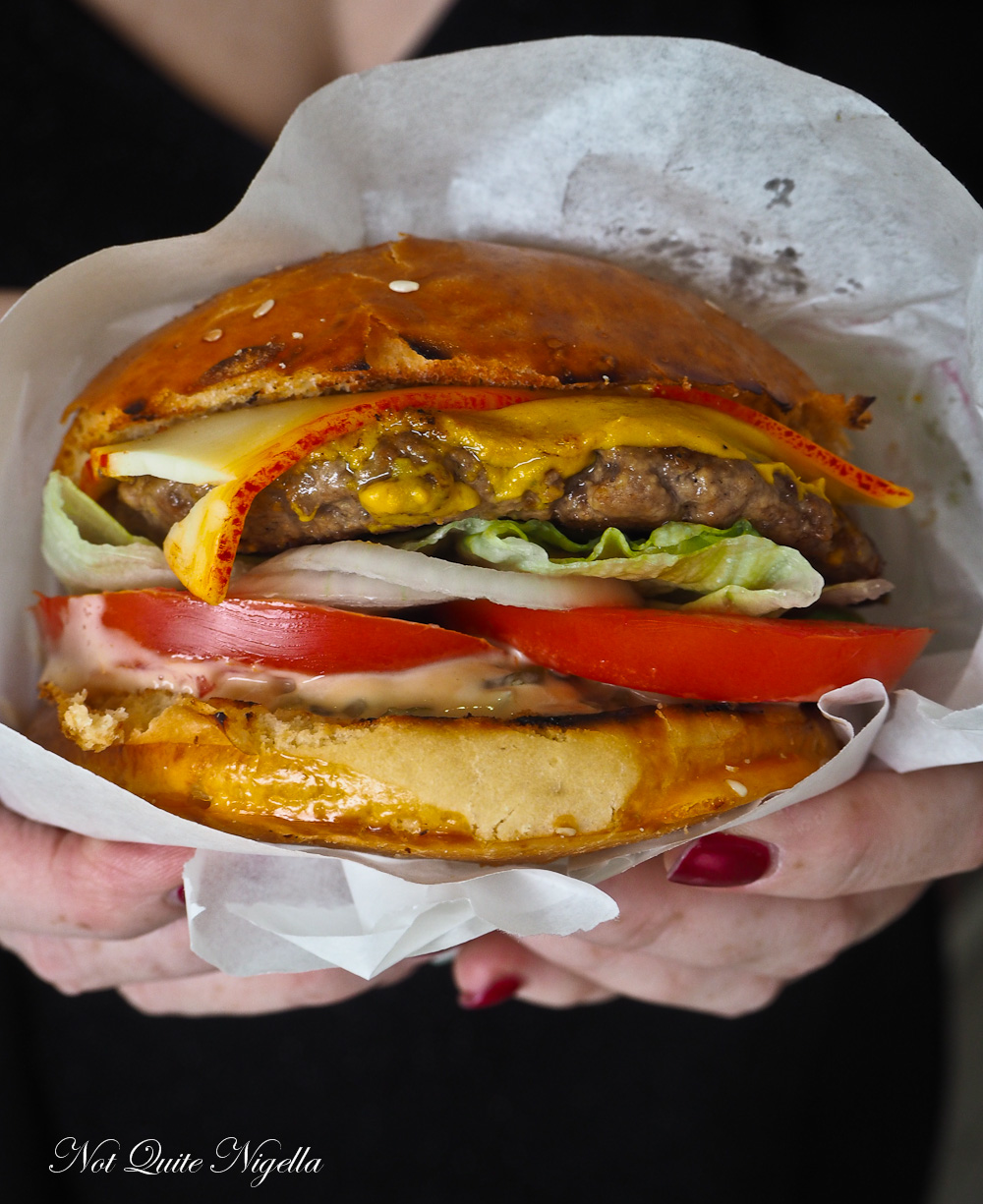 The plan was to do a dish for every best picture nominee. But since there are eight of them it proved a bit too much. I mean I couldn't make eight items and put on a dress. I had read in one of those very trustworthy gossip magazines that the post Oscars stop of choice for Hollywood folk was In-N-Out burger. Could we do it? Yes we can! And trust me, these home made In-N-Out burgers are brilliant and well worth making just to get your own taste of the West Coast at home! 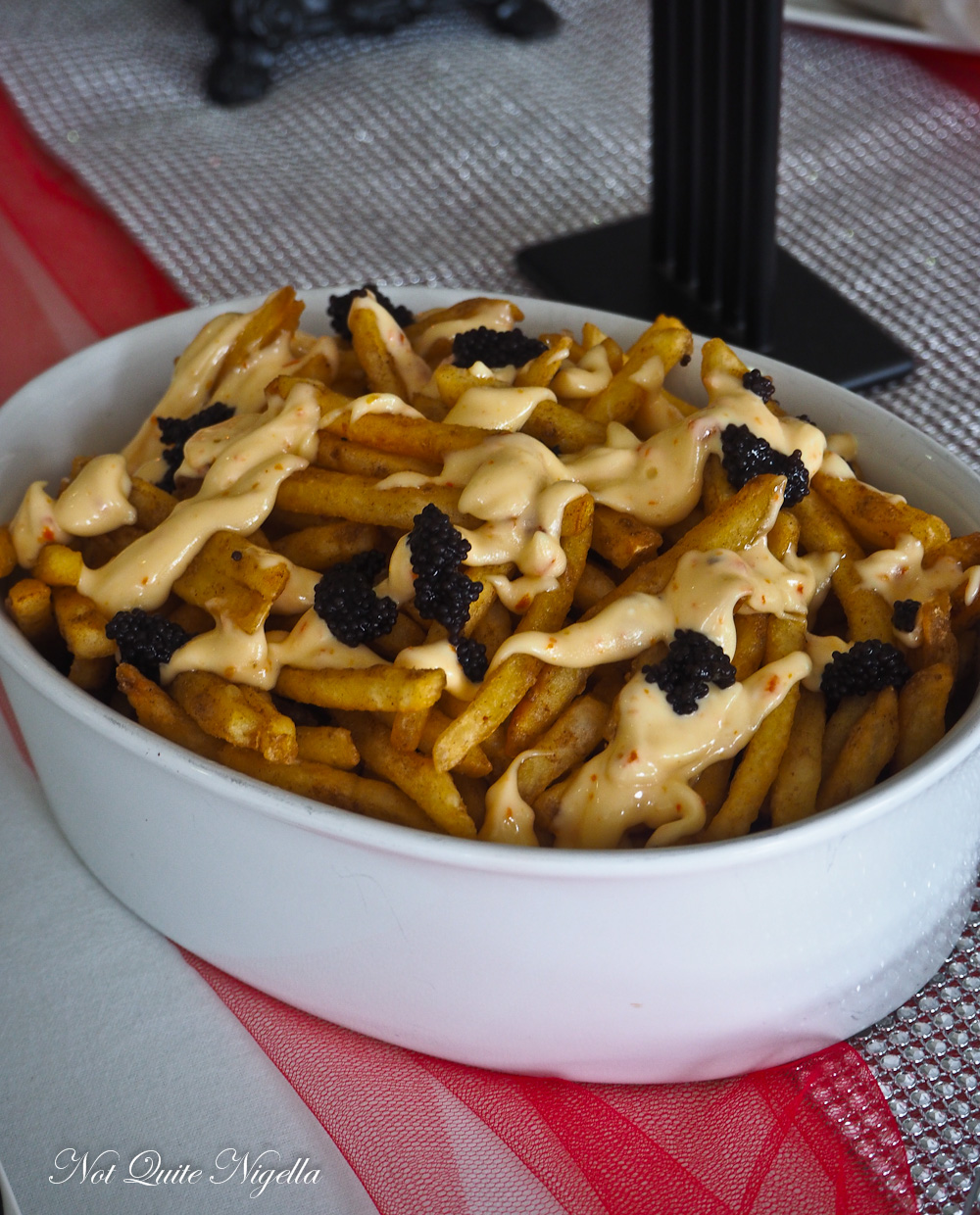 What goes best with burgers? Fries! And while we could do the In-N-Out animal style fries we thought that we'd glam them up a bit by adding caviar to them and mayonnaise. Just because we all have an avowed love of mayonnaise and caviar would add the salt to the fries. Serendiptously, tossing French fries in curry powder is a great idea. If anything was the breakout hit (check my Hollywood agent-speak ;)), it was these fries. 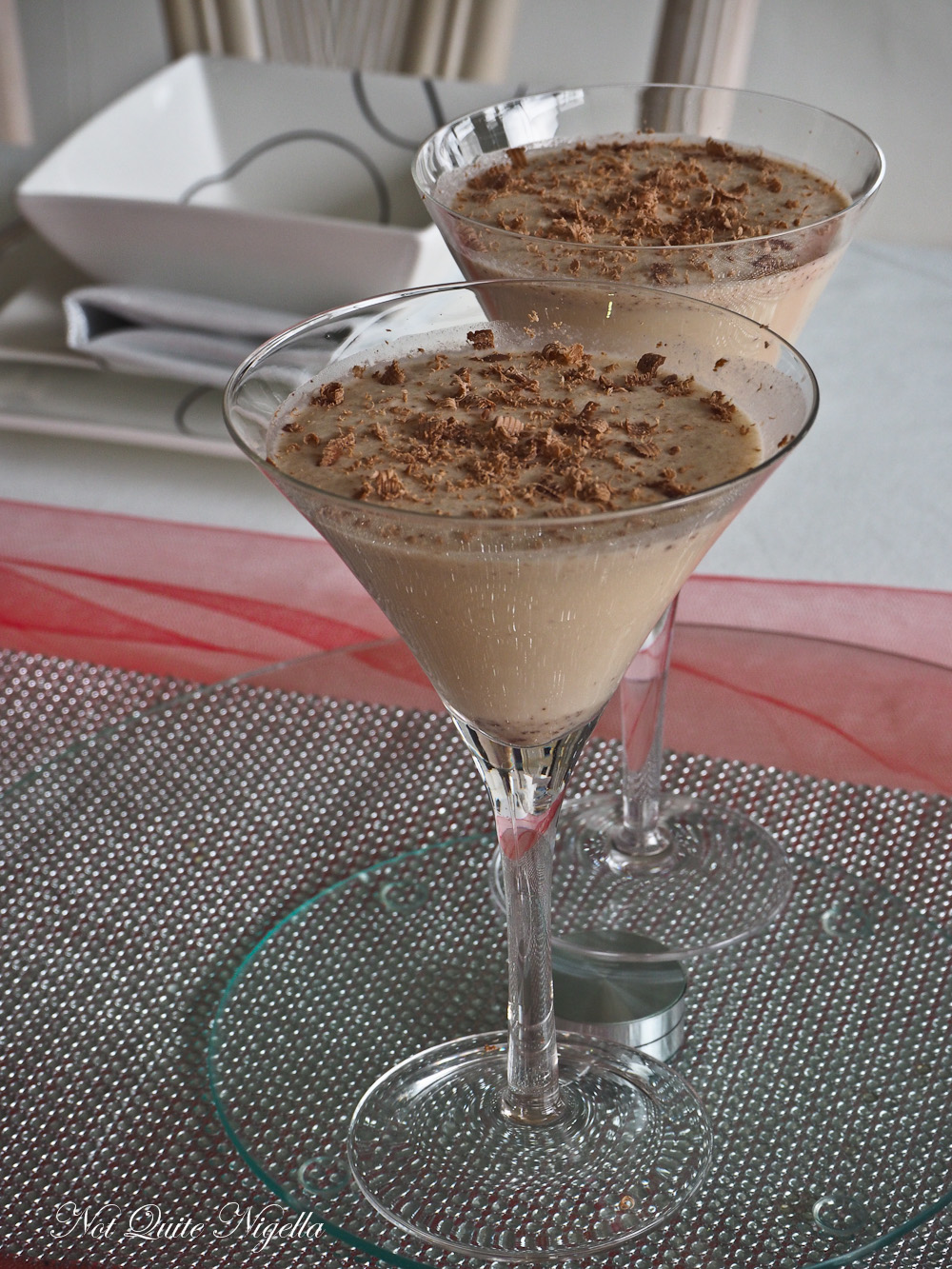 After that, you need a cocktail and we couldn't think of anything for the film Whiplash (admittedly, the only nominated films I saw was Selma and Grand Budapest Hotel) so we thought what better than a Whiplash cocktail that Cheryl made in the blender. It was pretty much a delicious alcoholic dessert in a martini glass. Hollywood folk like drinking - have you ever seen the tabloids? 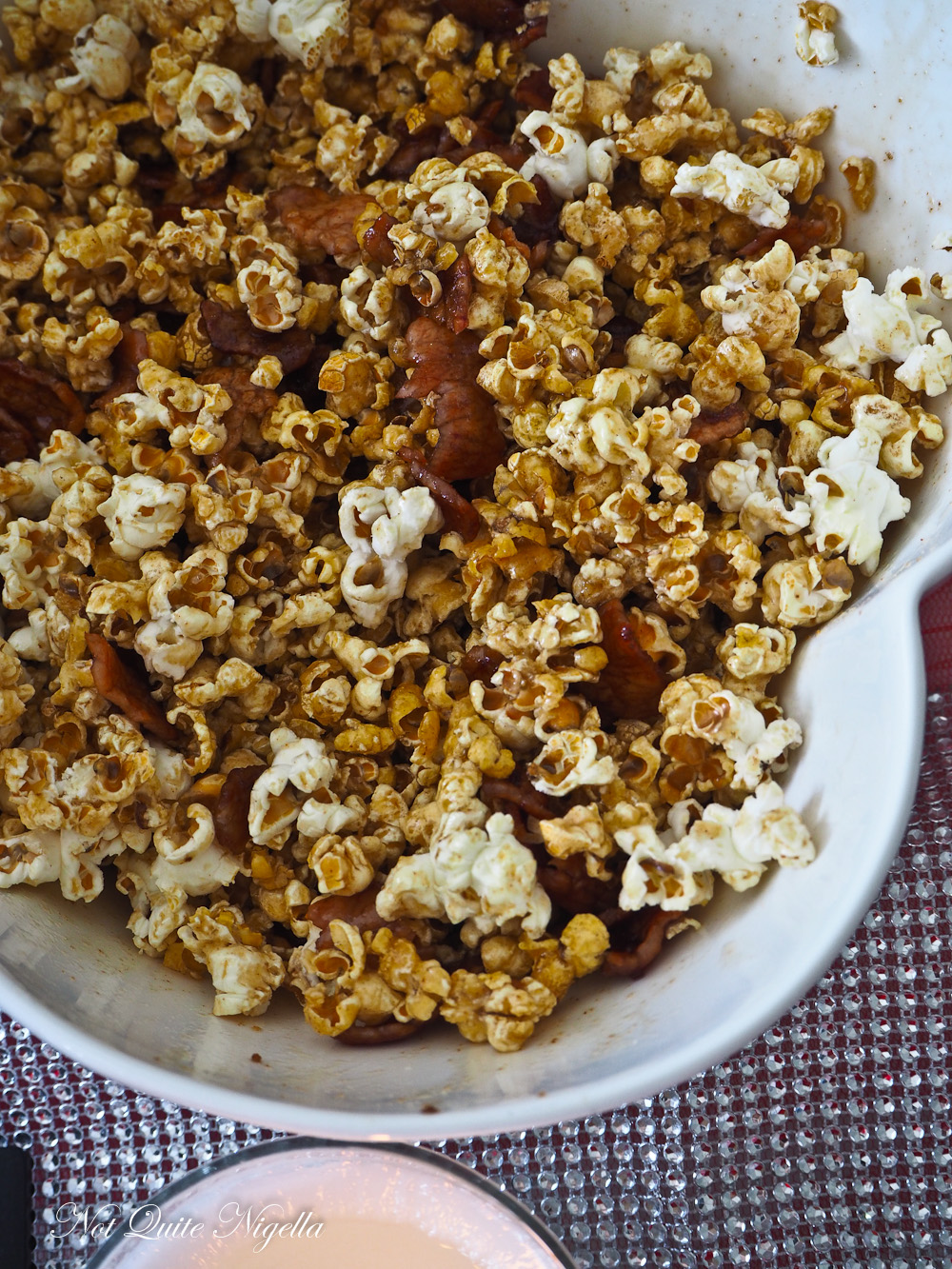 What better to watch movies with than popcorn? Belinda's idea was a version referencing American Sniper where Bradley Cooper had to put on a lot of weight to play the lead character. This version had bacon, maple and cinnamon salt and was a killer combination. No pun intended! 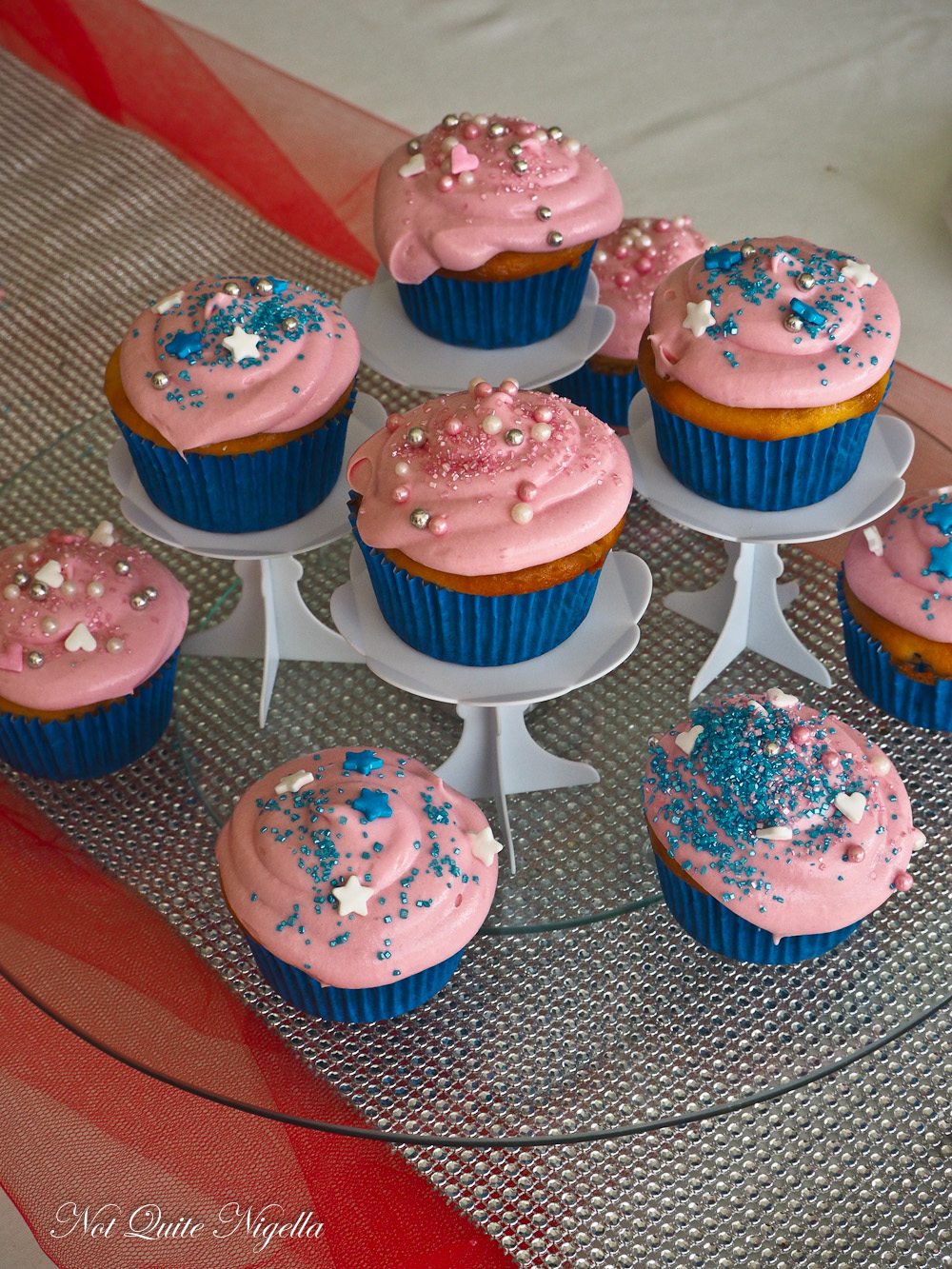 Last but not least was dessert-cherry cupcakes in blue and pink just in the style of The Grand Budapest Hotel made by Belinda and her girls with strawberry cream cheese frosting and a cherry studded vanilla cupcake. And like Hollywood folk do, we cut one into quarters and shared it and just stared at the rest. Because Hollywood. 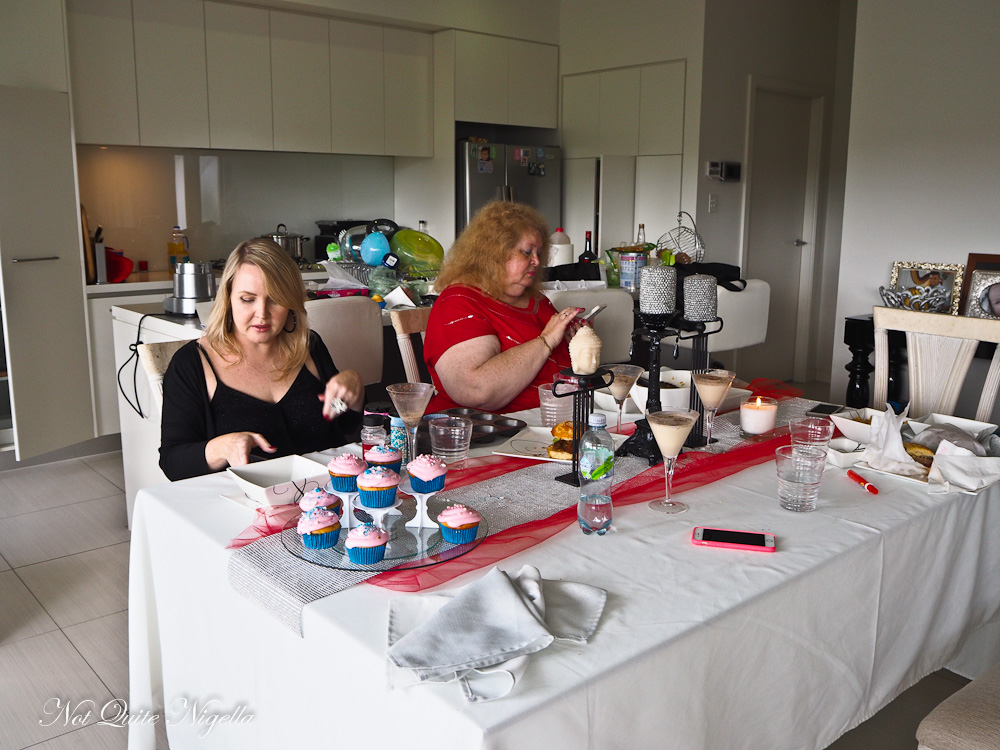 Belinda and Cheryl riveted by the Oscars telecast.

Once everything was made, we sat down and ate our food in our fanciest gowns-and the Oscars gods were looking down upon us as we didn't spill any burger sauce on our dresses. Next year we'll do this in Hollywood right?

So tell me Dear Reader, have you ever held an Oscars viewing party? Did you watch the Oscars this year? What did you think of it? What was your favourite moment? Have you ever tried and In-N-Out burger?

And if you want to see a video of how to make your own In-N-Out Burger have look at the video that I made!

The Imitation Game: the In-N-Out Burger 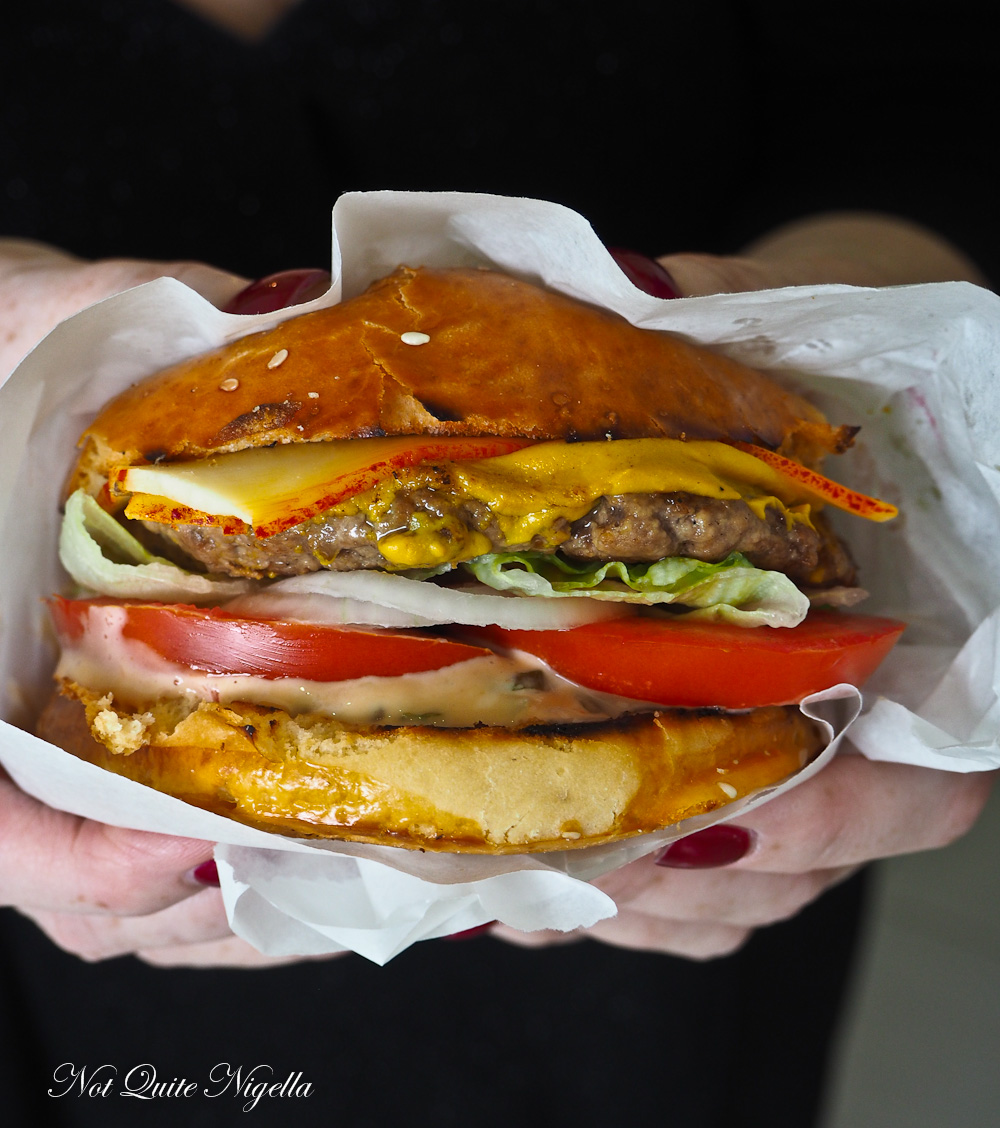 Unfortunately we don't have an In-N-Out Burger in Australia although apparently there has been the occasional pop up across Sydney. I say apparently because going to one was like seeing the Loch Ness monster - you heard about it but you never actually saw it yourself. But the key to In-N-Out burgers is really just fresh ingredients. I'm not kidding you when I tell you how easy this is to make. The only things that you may find challenging to find are American cheese and soft milk buns although you can make the latter. I was lucky enough to be able to get American cheese and milk buns from a lovely cafe owner that soon after regretted offering me some cheese and buns. The rest is crazy easy to put together.

I called my butcher and asked for a mix of 60% lean and 40% fat chuck to be ground for me. Unless you want to grind it yourself, this is the only way to get the ratios just right. He didn't bat an eyelid at the request and before I knew it, I had the burger patties (just give your butcher a few day's notice). The sauce is also really easy and is made up of three ingredients: mayonnaise, ketchup and gherkin relish all of which you can find at the supermarket (just don't be alarmed at the lurid green colour of the gherkin pickles!). The rest is four slices of dill pickles, white onion, tomato and iceberg lettuce. Don't wait until the next Oscars to make these, make them now. God I am pushy when I am drunk on Oscars cocktails...

Recipe based on this one-got to love someone like J. Kenji López-Alt 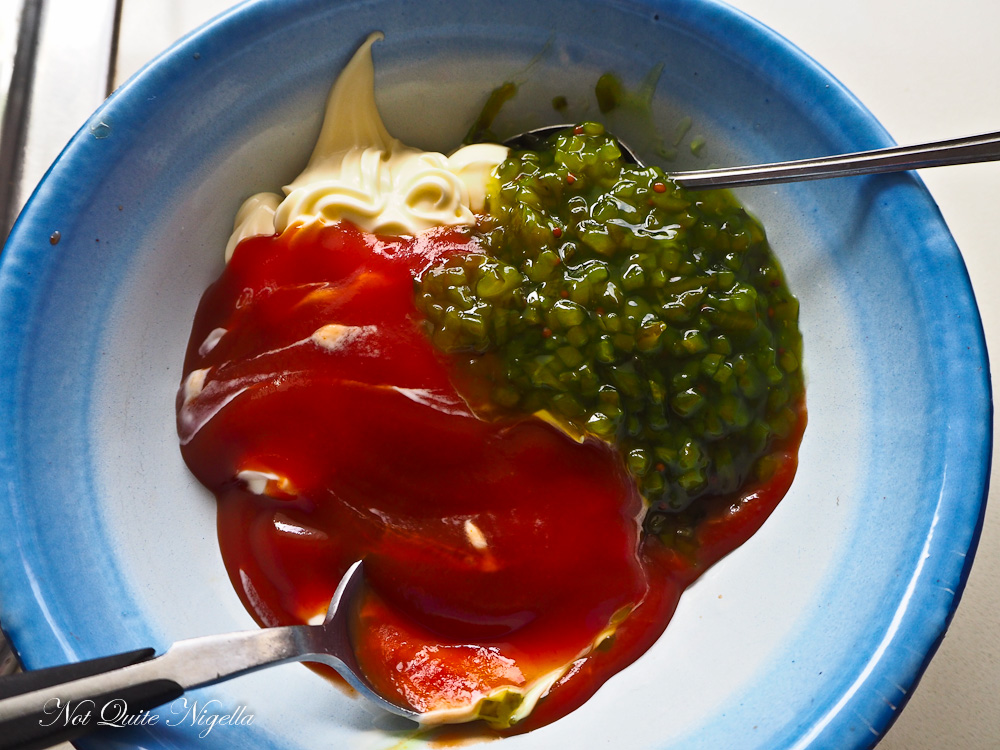 Step 1 - Make the sauce first by mixing the mayonnaise, ketchup and relish in a bowl. Set aside.

Step 2 - Warm the buns in the oven and then toast them on the cut side on a dry skillet or bbq. Add a couple of tablespoons of oil into a pan. Season the patties with salt and pepper and fry the beef patties until they are cooked through. When almost done, squeeze some American mustard on the top of the patty and flip over in the pan to melt and soften.

Step 3 - Assemble the burger. Spread a couple of tablespoons of the sauce on the bottom of the toasted bun. Add the dill slices, slice of tomato, onion and lettuce. Then add the mustard grilled patty and the cheese. Place the top on it and wrap in some wax paper. Squish it down and eat straight away. 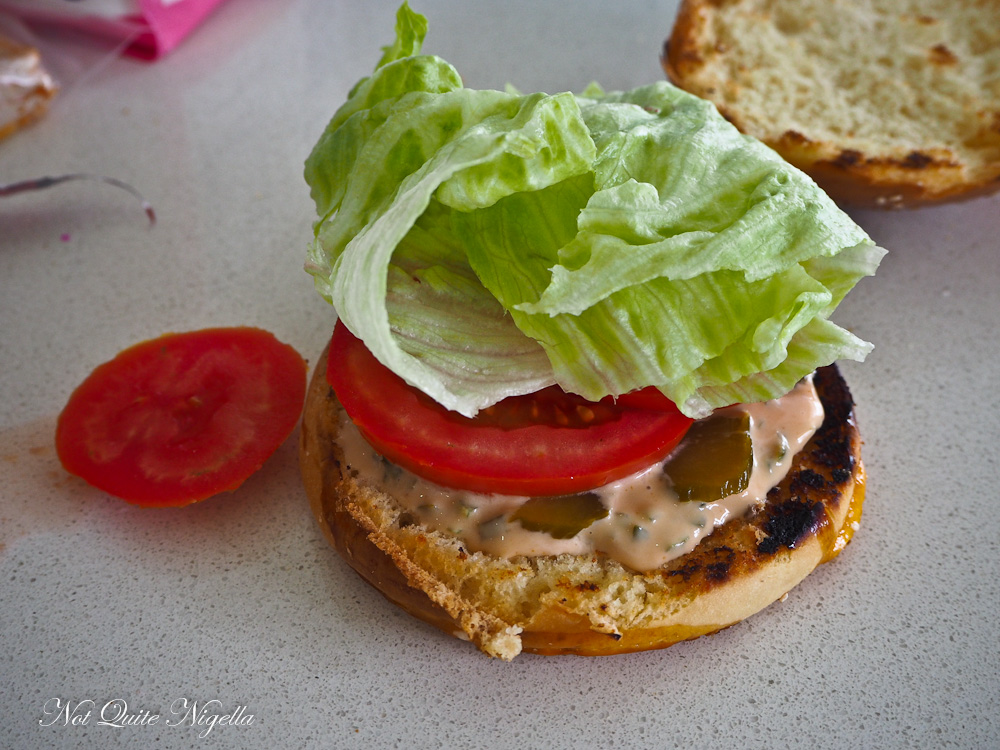 The Theory of Everything Fries 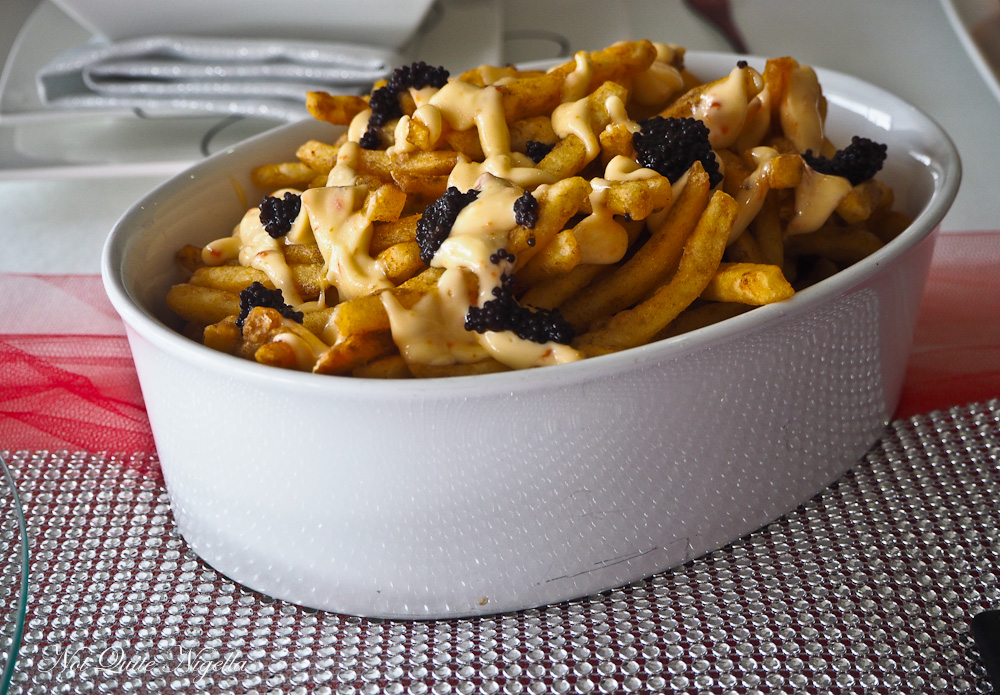 Okay this is a slightly tenuous link but I have no idea what Stephen Hawking eats although I'd love to know. But I'm pretty sure that given all the important questions that he gets asked (the opposite of the #AskHerMore campaign) then a question about what he has for lunch would no doubt produce derisive looks. Even if you don't like the idea of caviar on fries (I'm just trying to channel what people that make $10 million a film spend their money on) then do shake your frozen French fries in curry powder before frying them. It's amazing!!

Step 1 - Shake the French fries in the curry powder. Heat the oil and when ready, add the spiced French fries and fry until golden. Belinda's advice was to fry them for a long time so that they are completely crisp-it's hard to overfry French fries apparently and these were beautifully crisp and stayed so for a long time never going soggy.

Step 2 - Using the plain tip, squeeze mayonnaise over the top of the fries and add the caviar.

Cheryl loves cocktails like Fluffy Ducks and Strawberry Blondes which are essentially like a dessert in a cocktail form. I haven't seen Whiplash yet but I don't know if it is about getting whiplash. And apparently Birdman isn't about a man obsessed with chicken burgers...

Adapted from this recipe

Step 1 - Place all ingredients but the chocolate in a blender and blitz. Serve in martini glasses because you're just a little bit fancy today.

One thing that Hollywood folk like is bacon because they're all on that paleo diet and bacon is like a demi god to Paleo people. I like it because it tastes good but I'm pretty sure that it also responsible for any gained weight. Especially when you pair it with two thirds of a cup of maple syrup. I'm pretty sure that this was what Bradley Cooper ate to bulk up. Also fakebaby. I just had to mention that.

Step 1 - Mix the popped corn with the cinnamon and salt. In a frypan cook the bacon through and then add the maple syrup to the pan to heat it up. Pour over the popcorn and toss through to coat the popcorn. 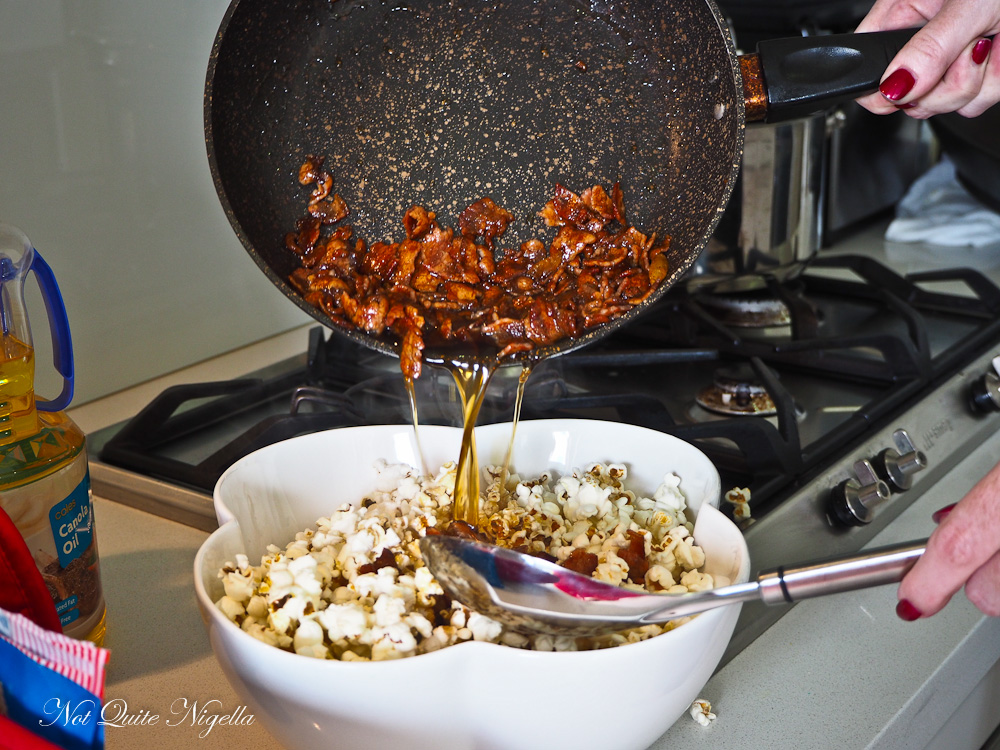