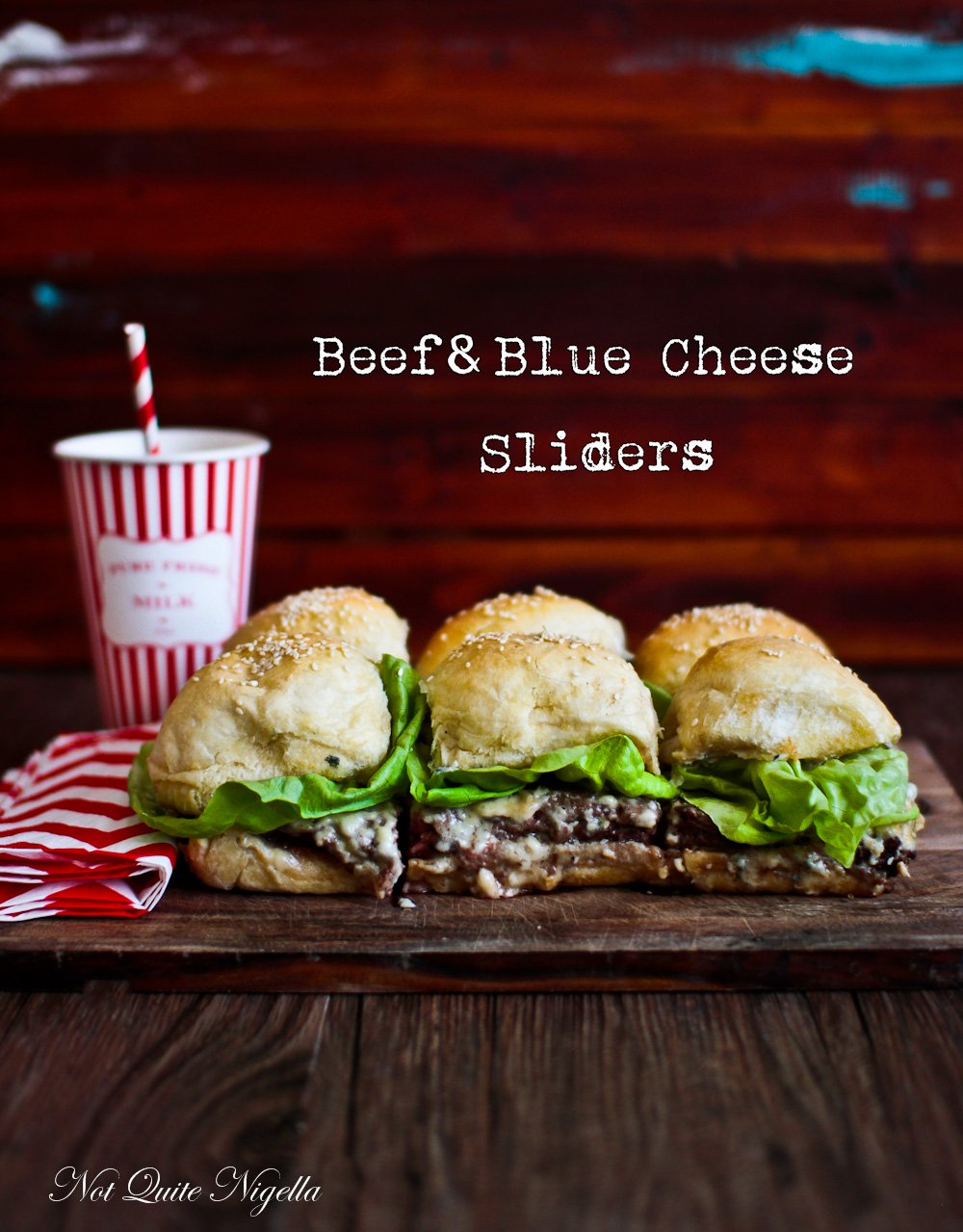 A few years ago I tried a steak with blue cheese sauce. I thought that it was a magical combination that I couldn't wait to make at home. Except I waited ages to make it and it wasn't until I decided to make some sliders to feed some friends that I decided to make this heavenly combination again!

Everyone knows sliders right? They're almost a trend that has been done to death and to be honest I find most sliders fiddly and the buns are never quite right for the proportion of filling - the bread is often tough or there isn't enough filling and they're dry. But in this recipe, sliders really come into their own. This beef slider is topped with melted Castello Burger Blue to create a slider that it is rich, gooey and divine. But because it is rich, it is much better in smaller slider proportions. And the way that we make it is a total cinch too! I can't wait to show it to you! :D 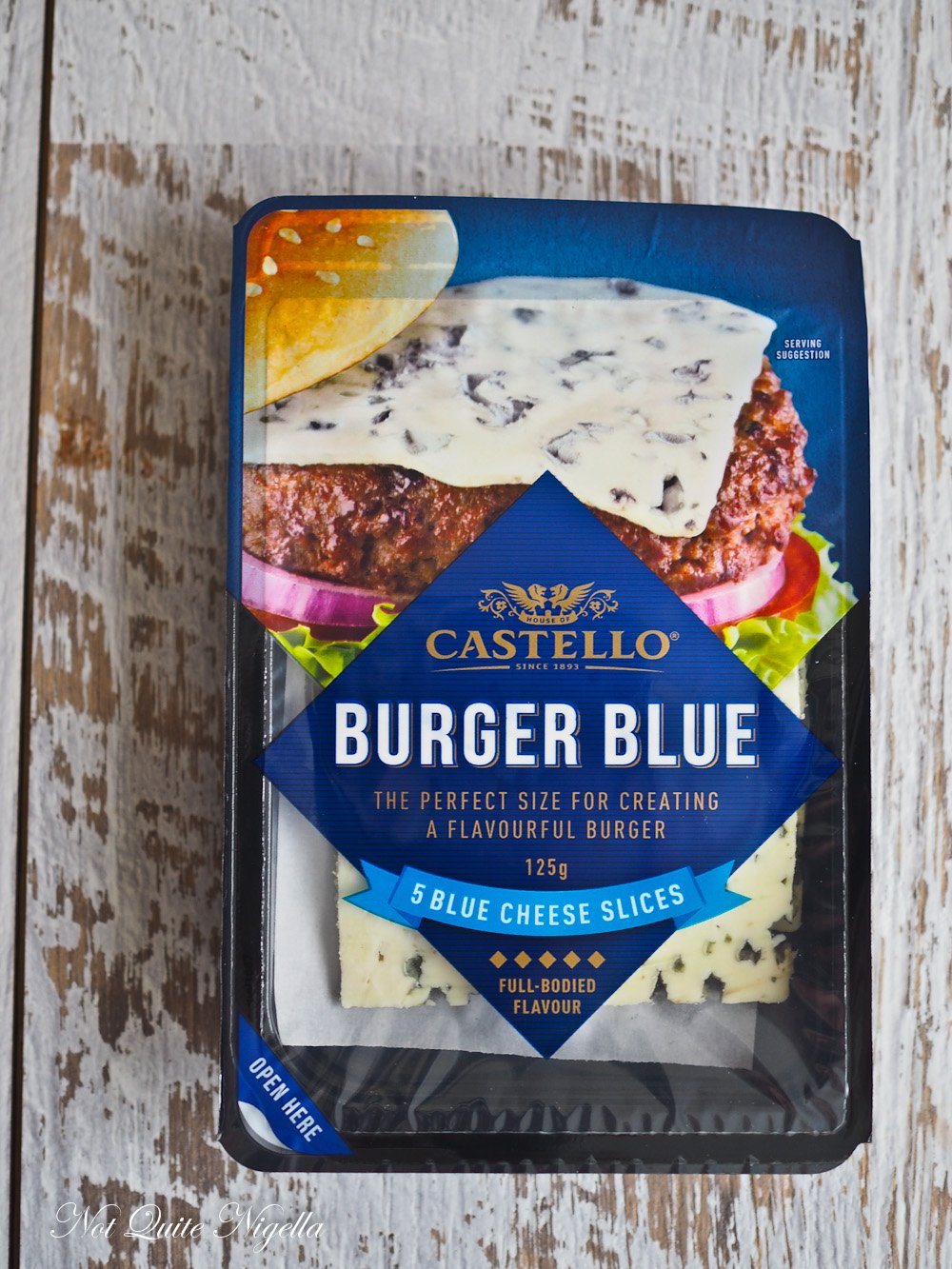 The method is super simple and I was inspired by a Tasty video. It revolves around a rectangular baking dish and half a dozen of the softest buns. There is no individual shaping of the patties and because of this, the proportion of bun to beef to cheese is juuust right. The flavour of the beef is enhanced by the easy to make baste that our friend Viggo came up with.

Viggo's perfect burger quest has been going for almost a year now and the baste is his secret weapon. We went over to his place and made burgers using his method and tried and tested a few different kinds with all sorts of buns. The sliders came up tops, the soft melty blue cheese rich and creamy but not too strong and the top quality dry aged brisket chuck beef blend was perfect. 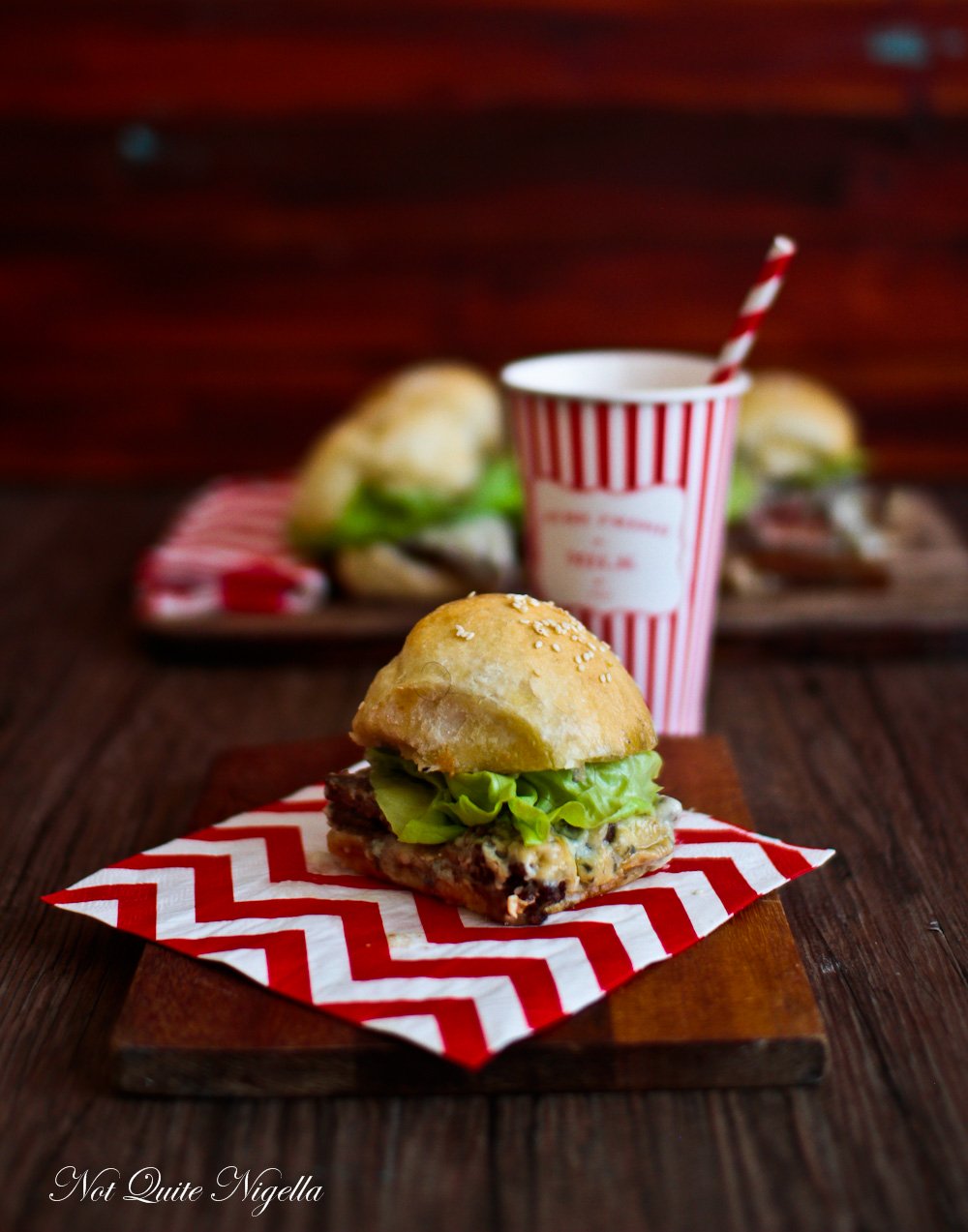 Castello Cheese has been in Australia for more than 30 years, but has a strong Danish heritage. Castello’s blue cheese was the very first blue cheese I tried and it's relatively mild and creamy. You get 5 slices per pack of Burger Blue (you'll need 6 for this recipe, so make sure you grab two packets) and you lift it up using the square of parchment and place it on the burger so that it remains in one slice.

Because I wanted to make a quick slider recipe I pared back Viggo's baste to make it even simpler. He simmers his soy sauce on the stovetop with sugar, garlic, Worcestershire, Tabasco and Sriracha sauce. I made mine an abridged version that didn't require cooking but added a bit of kick with a wasabi mayonnaise.

This blue cheese beef slider also changed Viggo's mind about cheese. He's actually a Dane that doesn't usually like cheese. He recalled his grandfather in Denmark who was a fisherman who would swap fish for cheese. His grandfather was particularly fond of a stinky cheese called Gamle Ole,a kind that had to be kept outside the house. This of course is a much milder cheese so there's no need to open up all the windows like his grandmother insisted her husband do before consuming said cheese!

So tell me Dear Reader, how strong do you like your cheese? And what do you think of blue cheese? And have you ever tried it with beef? 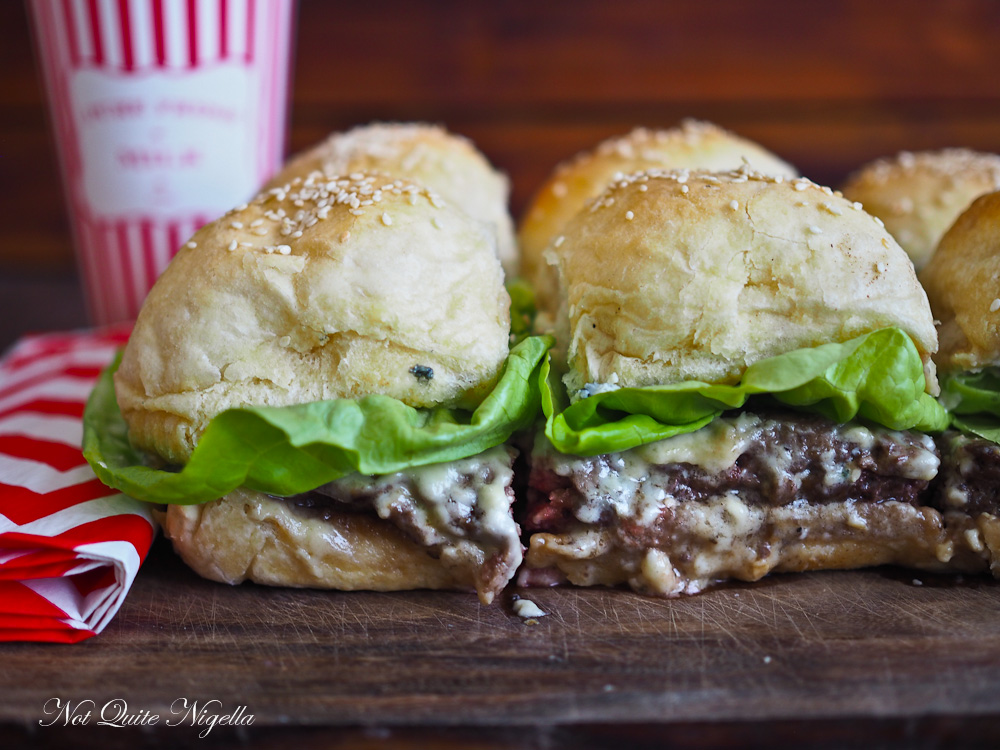 Not all butchers carry brisket, you can ring ahead to order it. I buy dry aged grass fed brisket and chuck steak and ask them to grind it to order. Note: supermarket beef releases more water while this beef didn't. 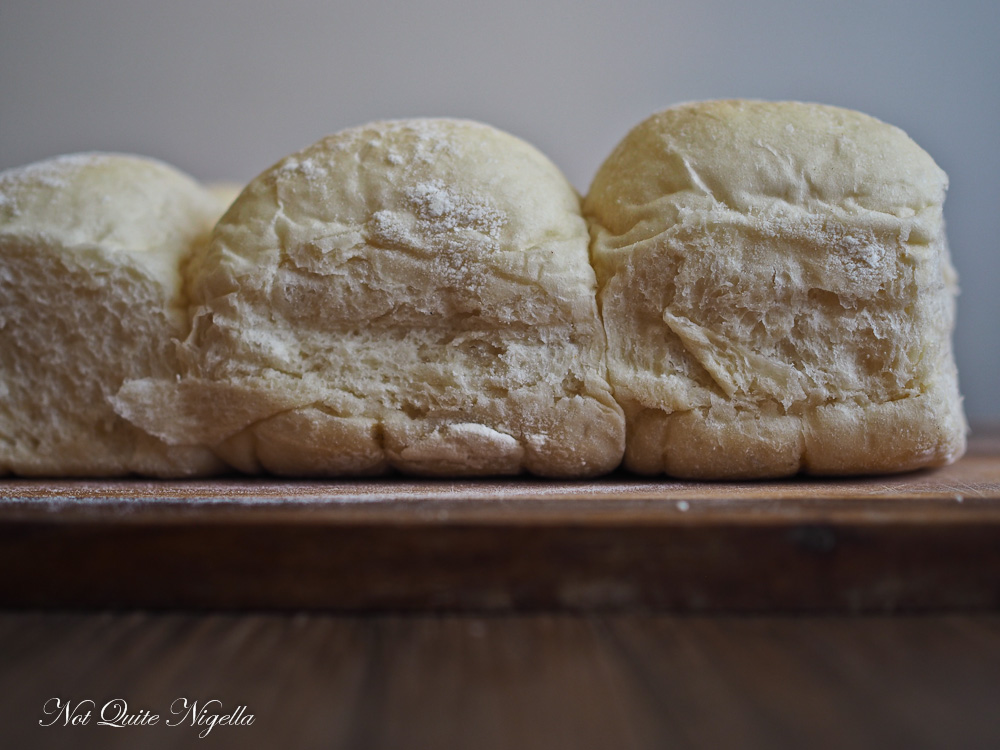 Scotch rolls are par baked rolls that are attached to each other which makes theme easy to cut and prep. They are super soft and fluffy. I found these at Brumby's bakery in Randwick. 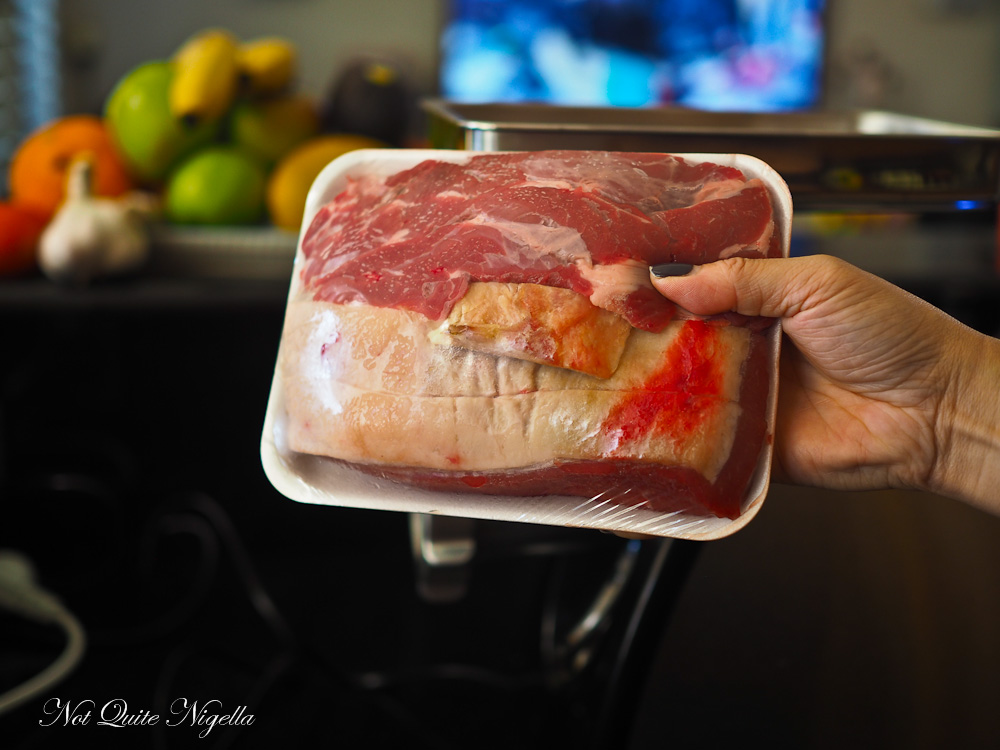 Step 1 - Preheat oven to 200C/400F and have a baking dish that snugly fits the buns. Mix the kecap manis, black pepper, garlic and Tabasco together in a small bowl. Brush the base of the baking dish with the marinade. Then lay the ground beef on top and brush it on top with the sauce too. Bake for 20 minutes (this will cook them through, bake for less time if you want them pink in the centre). 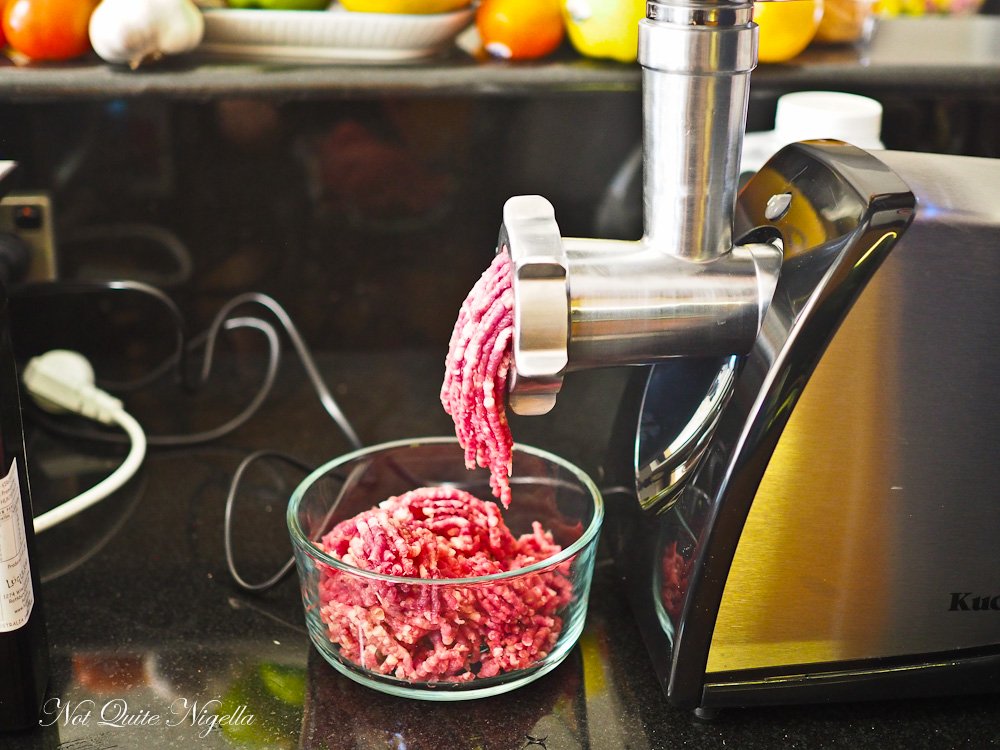 Step 2 - Meanwhile slice the buns in half horizontally and mix the mayonnaise with the wasabi. When the beef is done, remove it from the baking dish and clean and dry the dish. 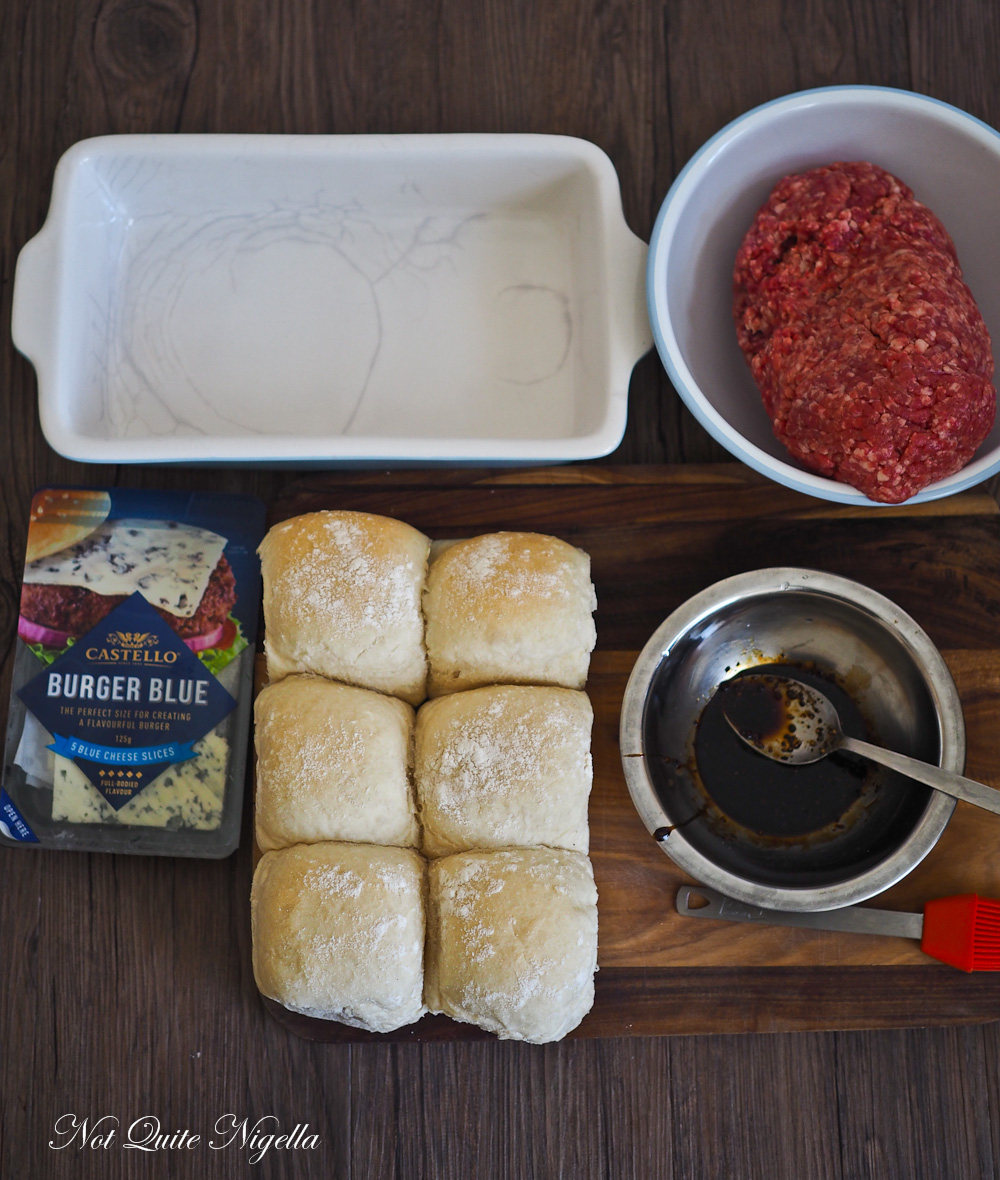 Step 3 - Lay down the bottom layer of the buns and add the beef. Spread with the mayonnaise and then lay the six slices of the Castello Burger Blue cheese slices. Grill until the cheese bubbles. Switch back to the oven at 200C/400F and add the burger buns. Brush with butter and sprinkle sesame seeds and then bake until golden, about 5 minutes. Serve with dill pickles. 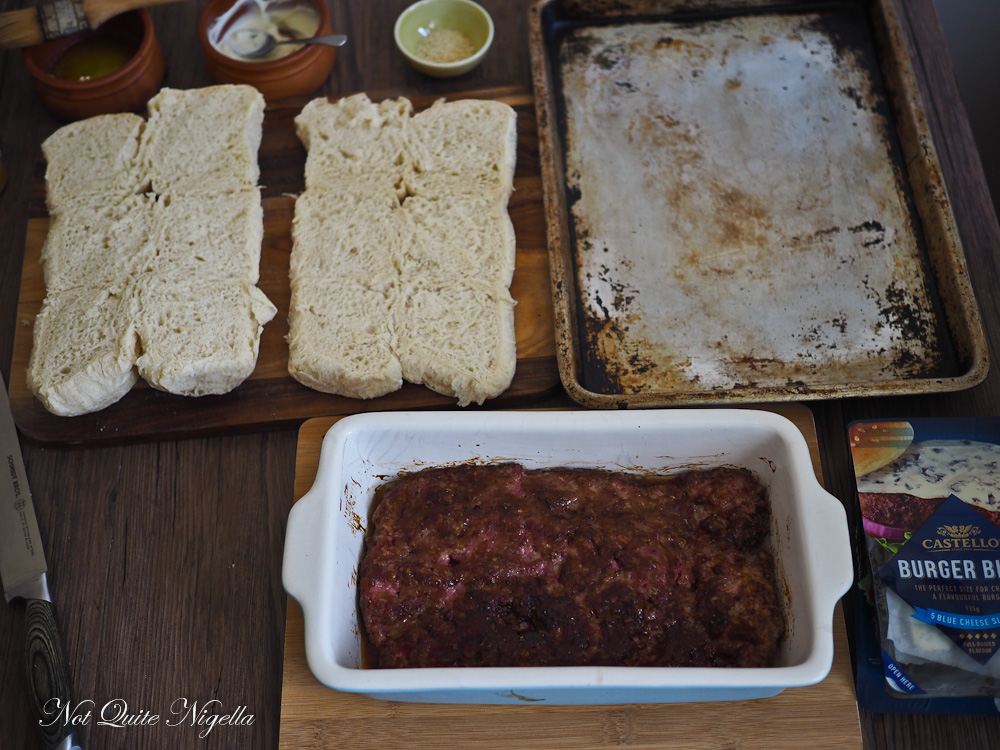 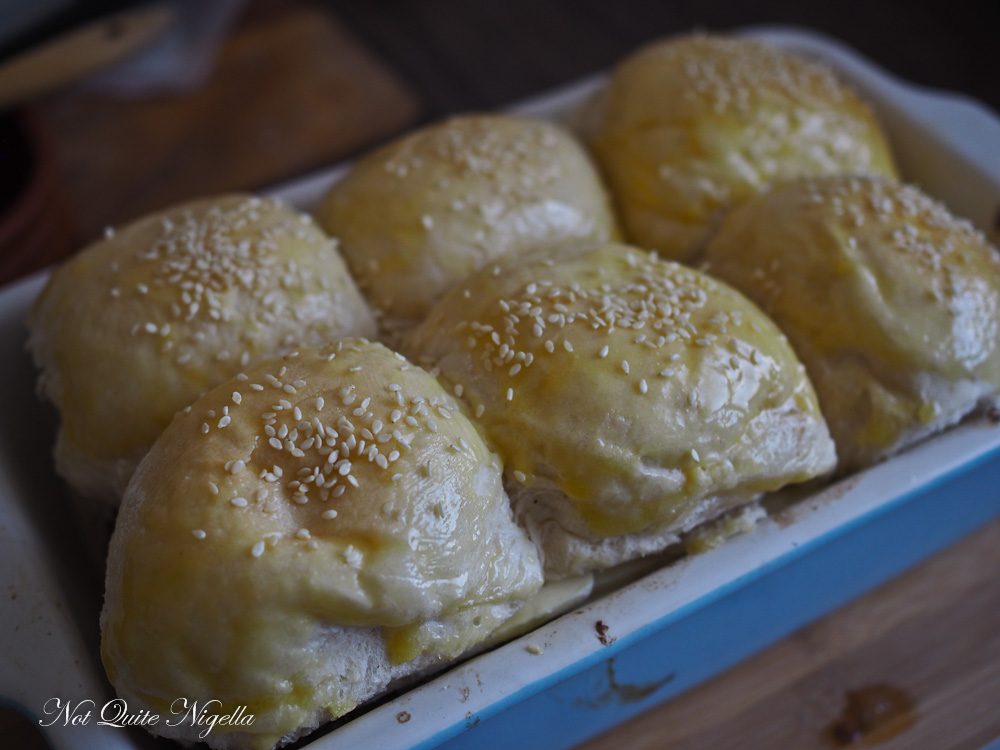 Brushing with melted butter and sprinkling with sesame seeds 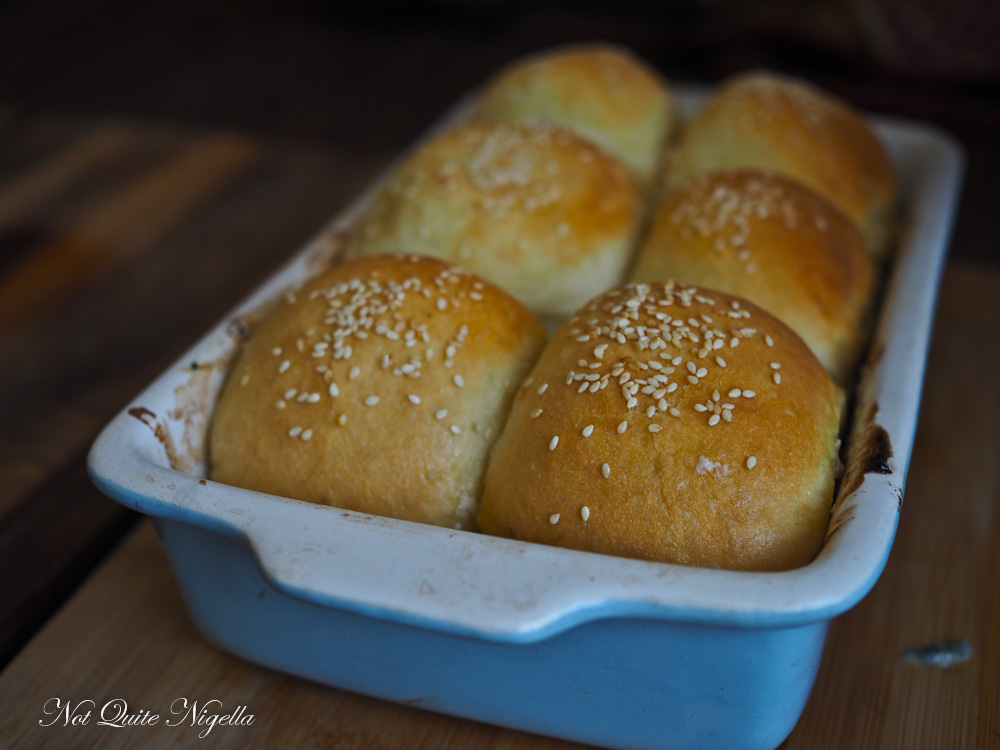