The Ombre Chocolates That Took Over The World (Mother's Day Gift Tutorial)! 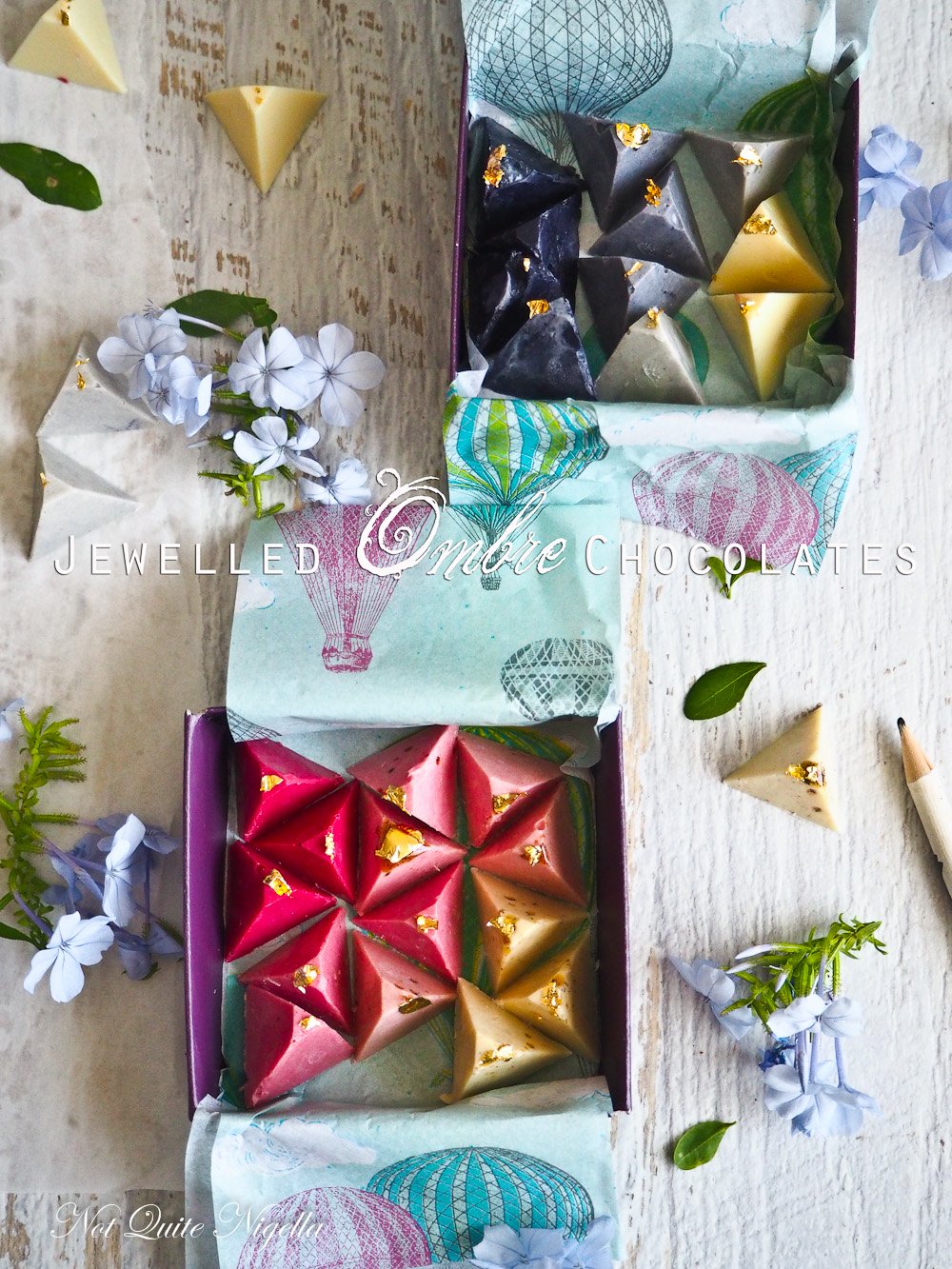 A gorgeous idea for a Mother's Day gift or just a gift for someone that loves all things pretty, these ombre chocolates have taken the world by storm. But did you know that they're really easy to make? I'm not kidding here when I tell you that you can make dozens of these gorgeous gold leaf chocolates yourself!

Dear Reader, I was thinking about names the other day. It came to me while I was faux meditating. You know where you've been told by your spouse that you just need to meditate - or else! And because you're sometimes a people pleaser, you do as you're told (or because you're sick of the argument) so you sit on the bed and close your eyes and try to think of white space.

You already know that it didn't work right? ;) 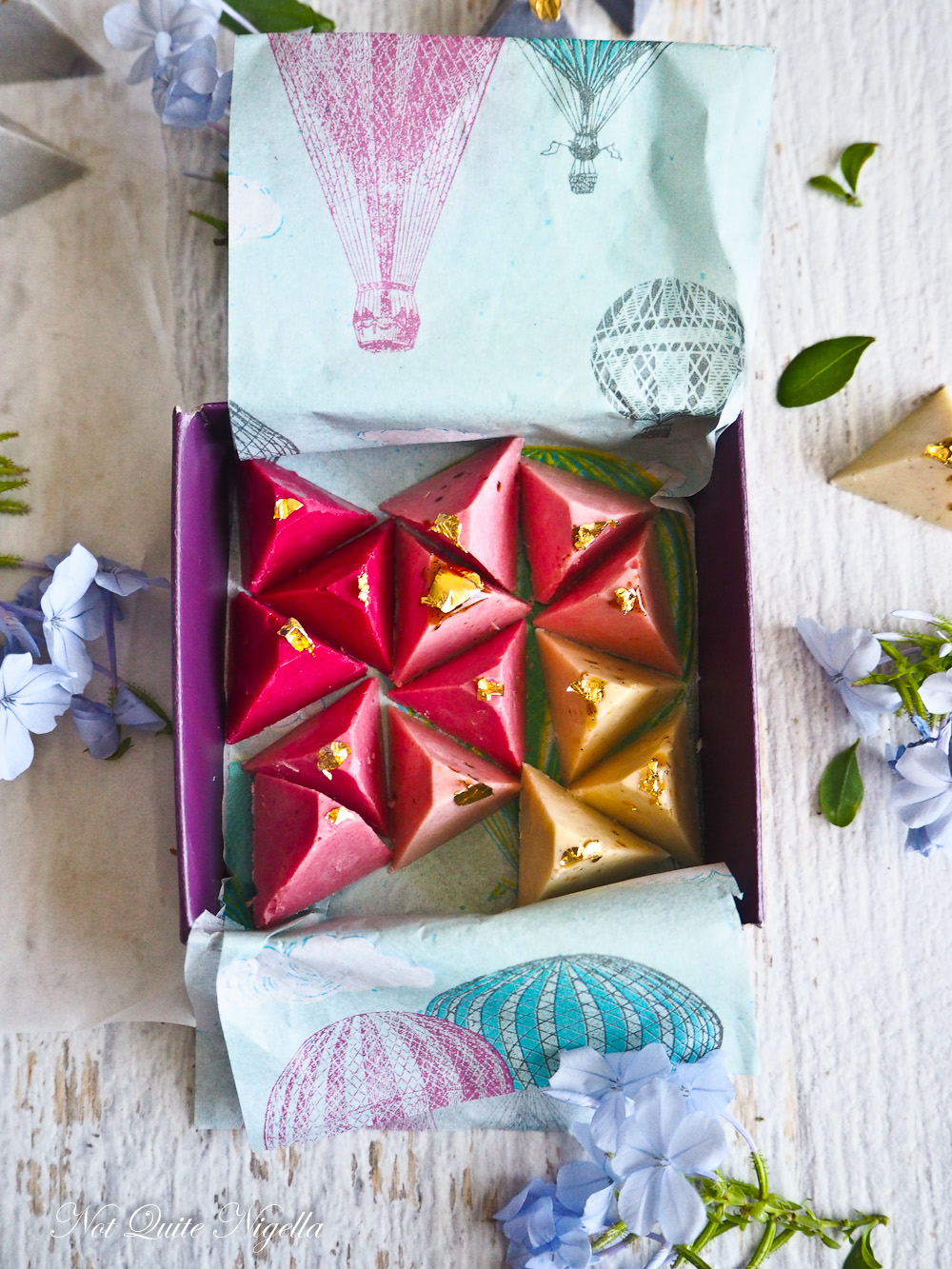 Because on that white space, something pink appears. For me, it's a lipstick mark. You see I had just bought a new lipstick and I was thinking about it. (Bad brain! You're supposed to think of white space!) It was by a brand called Kat Von D (not sponsored, I just love it) and it got me to doing the opposite of what I was supposed to be doing. It got me to thinking. Kat Von D and Dita Von Teese. Two dark haired temptresses with surnames with Von wedged in the middle. Both are actually not their real names but I started thinking, would putting a Von in my name make me sexier?

Try it with your own name. Yes? No? Maybe?

No? Okay. Sigh...back to the white space. And then my mind went drifting to chocolate because it was the afternoon and I needed a sugar hit. And I thought of these chocolates in particular. 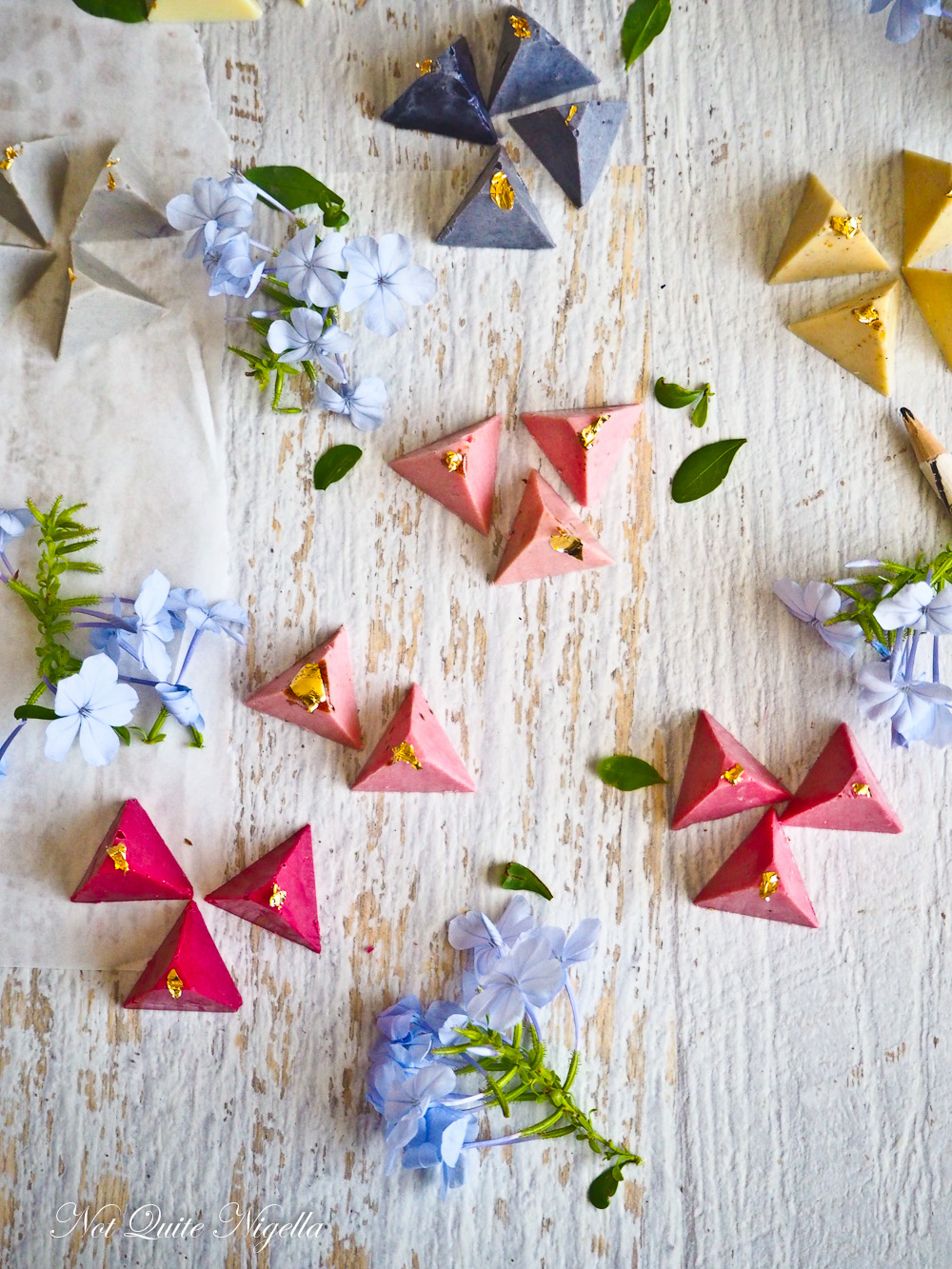 These ombre chocolate pyramids remind me of lipsticks. As soon as I saw them on so many Instagram accounts (Nectar & Stone, Winnow) I knew I wanted some so I bought several boxes for Christmas gifts for friends as they were so pretty. But in my quest to have never ending chocolates (sort of a riff on teach a man to fish but with chocolate) I wanted to experiment and make my own versions so I could have an endless supply of these. So off to ebay I hopped - I bought some silicon pyramid molds and then proceeded to wait ages to make them because I was too busy meditating.

I'm kidding! No it was because I was just a bit scared. Because I thought that they would be really hard to do but let me let you in on a big secret - they are in fact really easy. Deliriously easy!! In fact if you've got the basics down, there's no way you can screw this up (unlike meditating which continues to elude me). 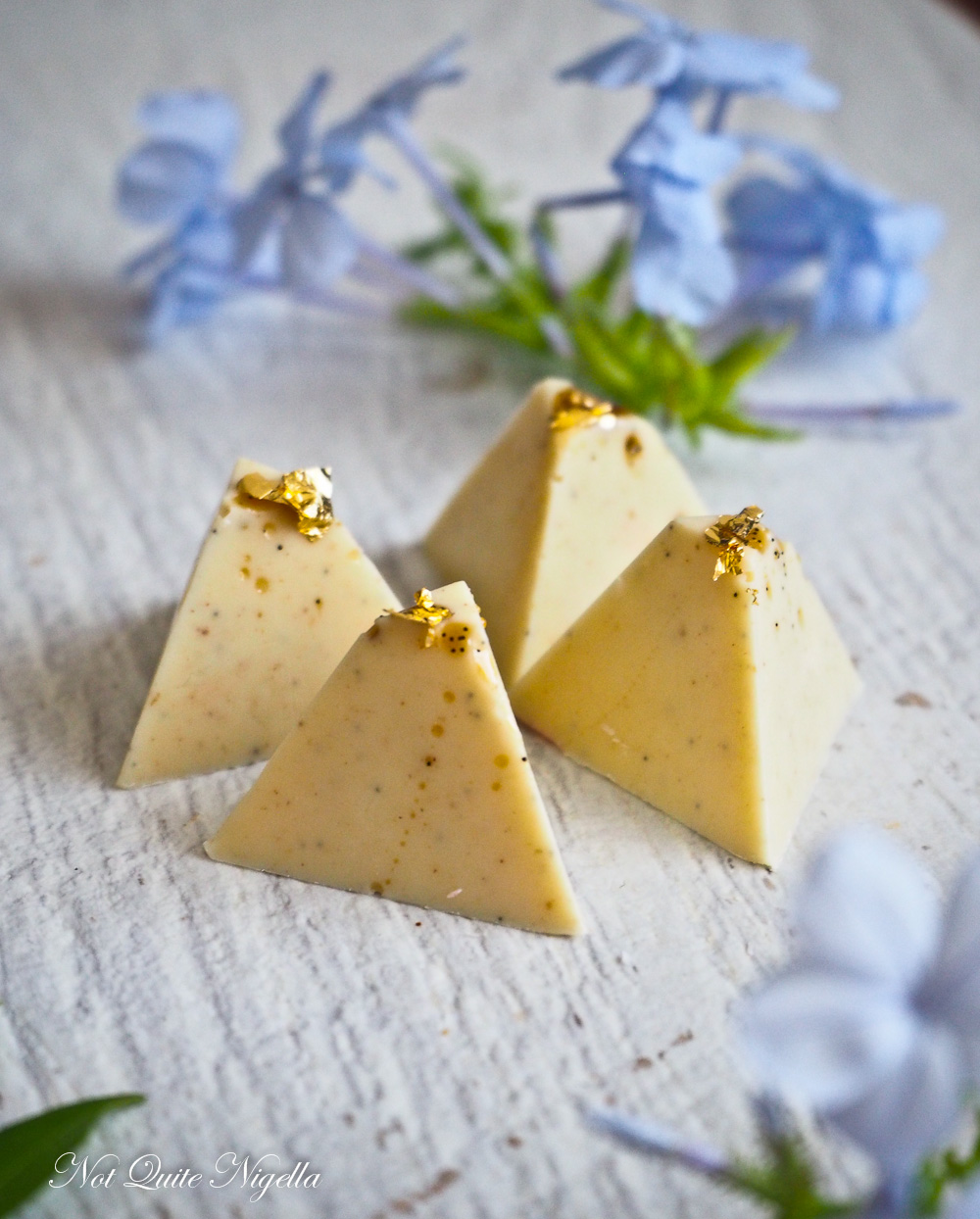 All you need is your favourite white chocolate. Go for the good stuff, especially if you're making this for Mother's Day which I am (surprise mother! Guess what you're getting?!). Couverture is best but be prepared to temper it. To do this you need an infrared temperature gun which Mr NQN bought me for my birthday this year. And don't worry it is also handy if you want to pretend to be Olivia Benson from Law & Order SVU (although apparently it gets old quickly if you're Mr NQN and refuse to play the perp).

I also learned the hard way that you also need fat soluble colours just so the chocolate doesn't get all grainy if you add a lot of colour to the chocolate. That means the Wilton and Americolor gels that you may use for cakes will work for the very pale pastels but they'll turn the darker colours chalky and grainy. But once you have the tools, you can make all sorts of shapes and patterns. These would also be beautiful done as hearts (I'm sure you could also use the Ikea silicon ice cube trays) or letters. The sky really is the limit on these.

And here's a video to show you just how easy the whole process is!

Anyone want to swap meditation lessons for chocolate making lessons?

So tell me Dear Reader, does adding Von in the middle make your name sexier or like mine, just sillier? If you could have a fantasy name what would it be? Have you ever tried tempering chocolate? 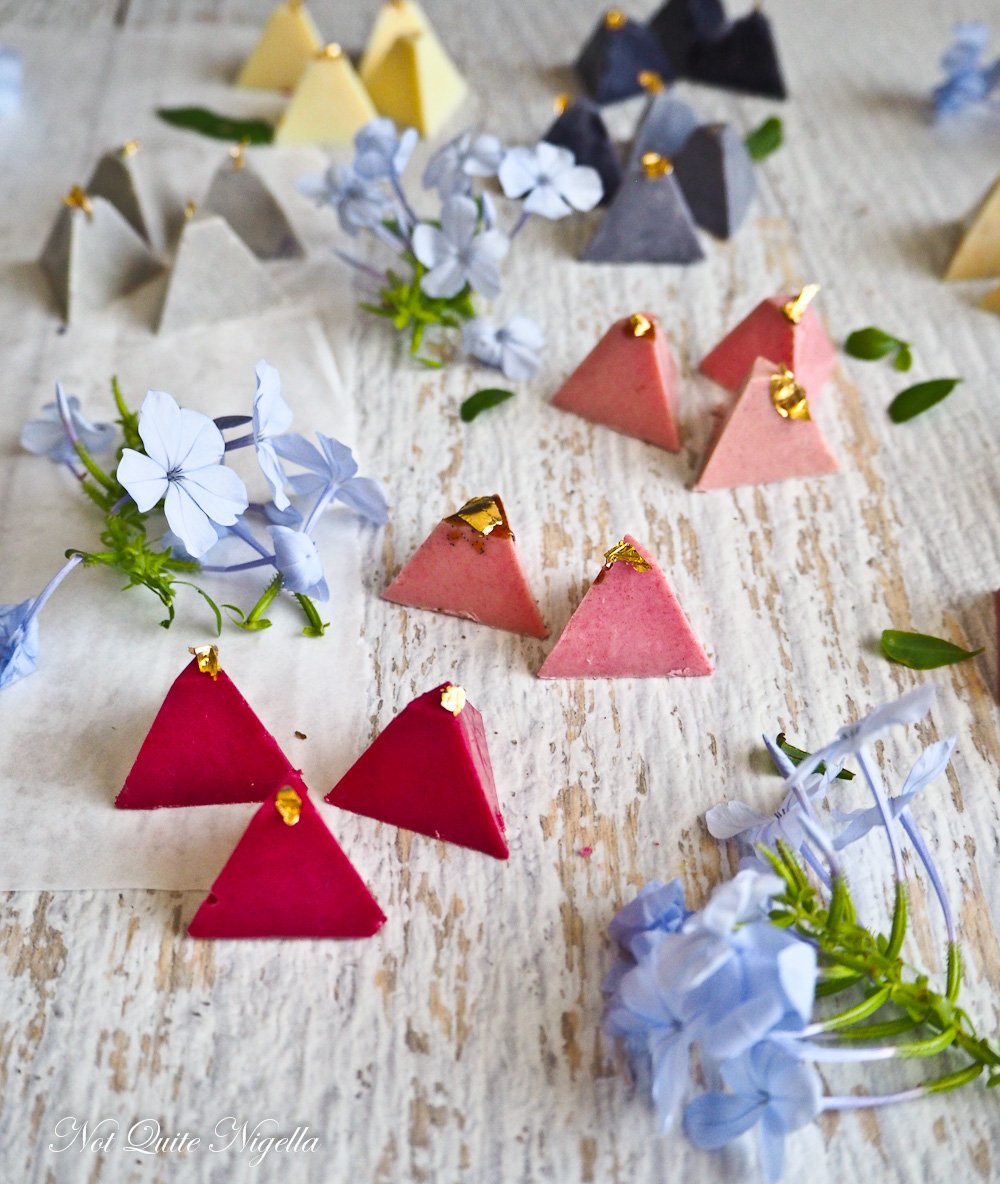 *You can buy fat soluble food colouring at The Essential Ingredient & The Red Spoon in Sydney. It comes in a small jar in a powder or liquid form. Deshel's also sells PCB food colouring in larger amounts.

Step 4 - Fill a fifth of the molds with plain white chocolate. It is important to gently tap the mold on the counter to bring any air bubbles to the surface. Then add a tiny bit of the food colouring to the chocolate to get a pale pastel colour and fill the next fifth of the molds with this shade. Then add a little bit more and repeat the process until you end on a bold shade. Use a dough scraper to scrape of excess chocolate back into the bowl. Allow to set completely.