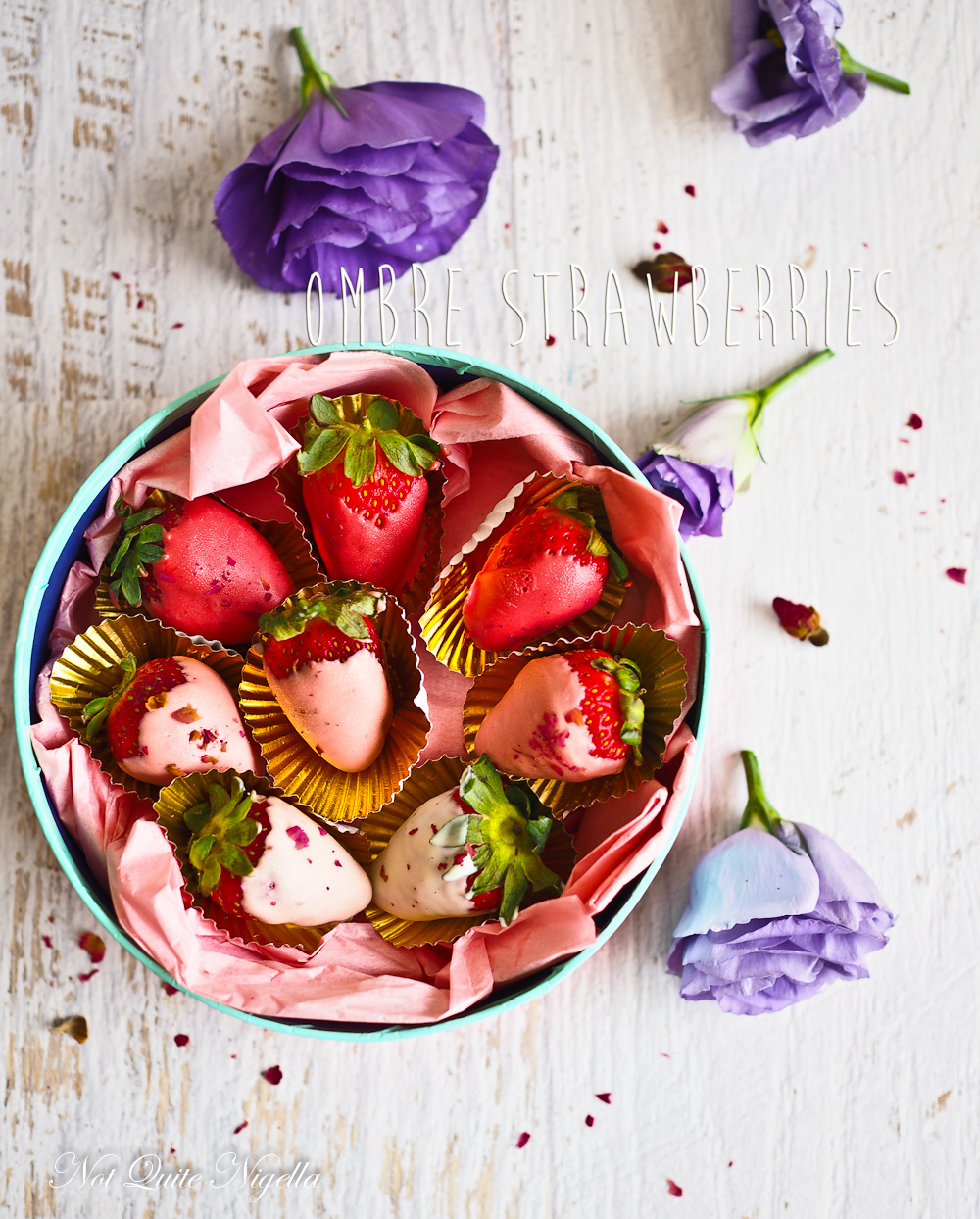 Looking for a delicious edible Mother's Day gift that is sweet but fruity at the same time? These ombre chocolate dipped strawberries are several shades of pretty. Even better is that they are very simple to do. I would love to surprise my mother with these for Mother's Day but my family don't do surprises. With gifts they're more practical. You tell them what you want and they'll buy it or they give you money and a card to buy it. Surprises while growing up were kept at a minimum (my father once said, "Why surprise? You give me heart attack!").

But the lack of surprises means that they've raised an absolute freak for them. I delight in surprising friends (but not my parents) and one day at a media function, another guest told me about this cycling gym called Scenic Cycle. My main issue with cycling is falling over and trying to get the balance right but these are stationary bikes sort of like a spin class (honestly I only found out what spin classes were from watching Unbreakable Kimmy Schmidt, I thought you spun around and made yourself dizzy).

Anyway, this man was a non sporty person and he loved it and the non sporty person in me became interested. I'm happy to take sporting recommendations from the non-sporty because I figure they've got a similar threshold to me. The concept is that they pair a ride with large screens where they show various rides in cities around the world so it feels like you are riding along. They turn the lights off and you can do as fast or as slow as you want. Mr NQN always complains that we don't do any sort of sporting things together and my sports apathy is the main cause of that. But I thought that this was something that we could do together.

I almost spoiled the surprise several times and there were moments when I was sure he would guess what I was up to. The first time was the night before when I asked him to pack his cycling gear into a bag because I have no idea what he wears when he cycles. He was quite suspicious and kept saying, "Don't throw it out ok?" (who moi? ;) ). The second time I thought he would know something was up was an hour before when I messaged him and told him we were going to a restaurant but I didn't have any makeup on and I wasn't dressed up. Because that never, ever happens. Because glamour should be taken seriously darlings! 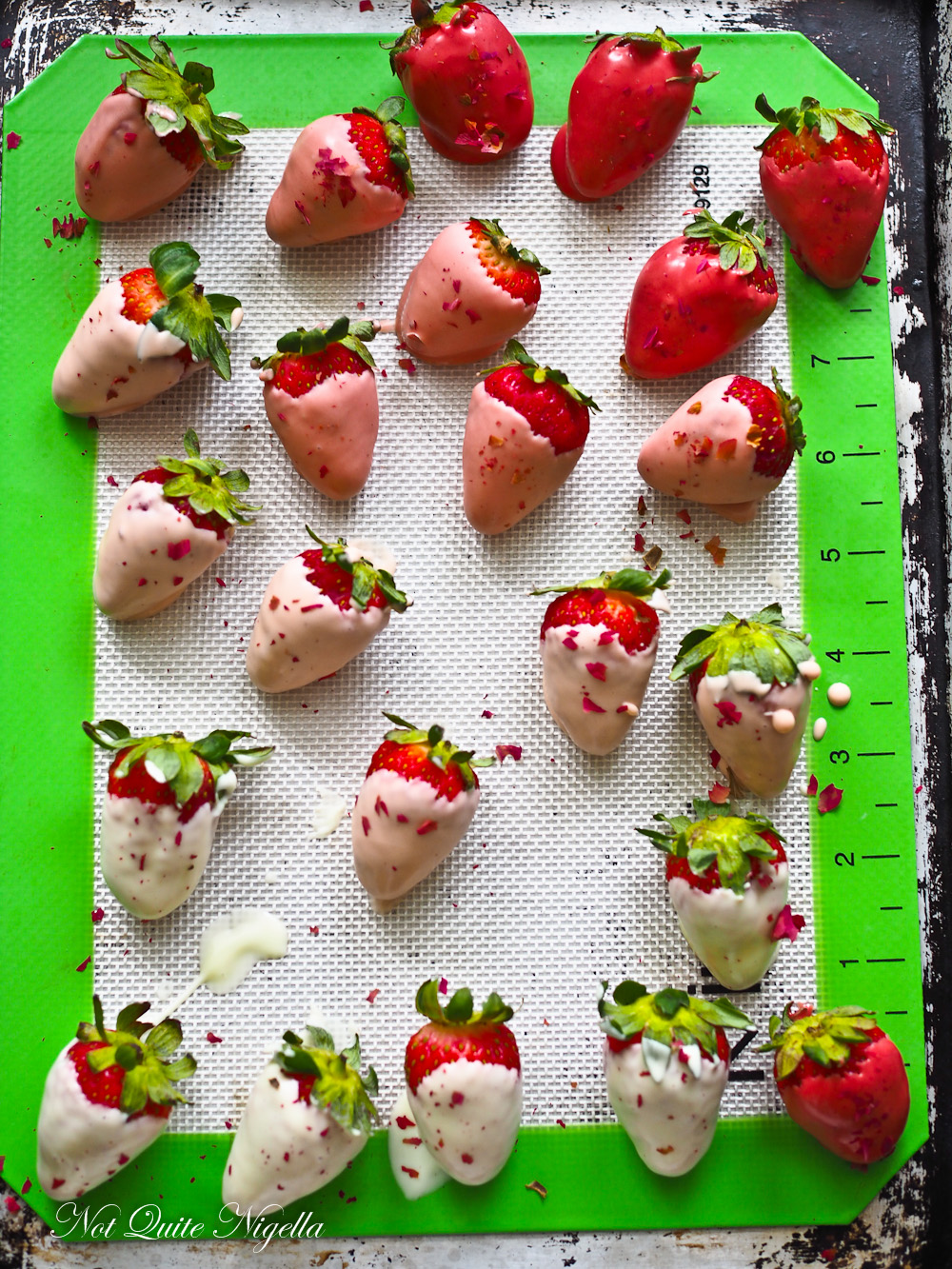 "What sort of food is it?" he asked as we were driving there.

"Ummm modern Australian," I answered changing the subject as quickly as possible.

As fortune would have it, there was a parking spot right nearby and while he got a parking ticket, I slipped the large and heavy gym bag onto my shoulder and hoped that he hadn't noticed it. I wasn't sure if he saw it but he started to tell me a story as we were walking there and then he said, "I'll tell you the rest of the story at the restaurant,".

I was relieved but then I realised that I didn't know where Scenic Cycle was. Was it in the enormous building and would I have to subtly look up the directory? It turned out it was easy to find and when I directed him towards it, his face looked confused and he tried to stop me by pulling my hand away.

"SURRPRIIISE!!" I said to him jumping up and down excitedly. The poor man had no idea and his eyes were darting everywhere and his mouth was open. We both tried it out and he really liked the concept and had a great time dripping sweat by the end of it. Surprisingly, I liked it too although I never quite got to the sweaty stage (I think what I did burned 20 calories and was at a pace like a scenic ride throughout the countryside). I even agreed to go with him and maybe get my own membership (once my legs recovered, I'm still waiting haha). 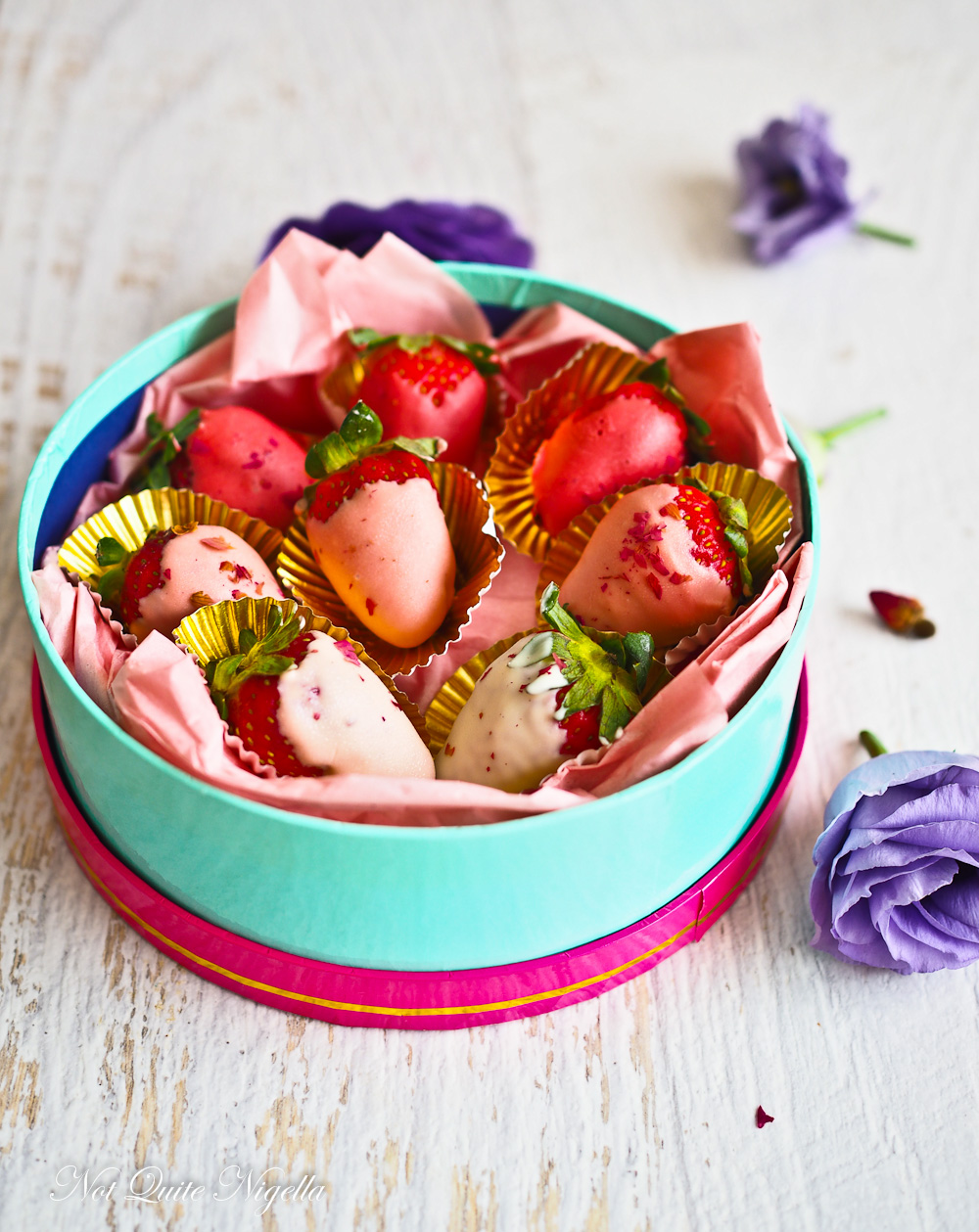 Back to surprises and gifts. In my humble opinion these chocolate covered ombre strawberries are pretty enough to give as a gift. I always think that chocolate strawberries seem like more effort than they are because they are just so pretty but the time and effect ratio for these is excellent. I set aside an hour to do these and I was done in 15 minutes and I dip strawberries like I'm going for a leisurely bike ride (i.e. not fast at all). The only thing that you'll need is fat soluble colouring that you can buy from specialty cake decorating stores. The rest is very easy indeed.

So tell me Dear Reader, do you like surprises? Either giving or receiving? Are you good at keeping secrets or surprises? Are you a sporty person? 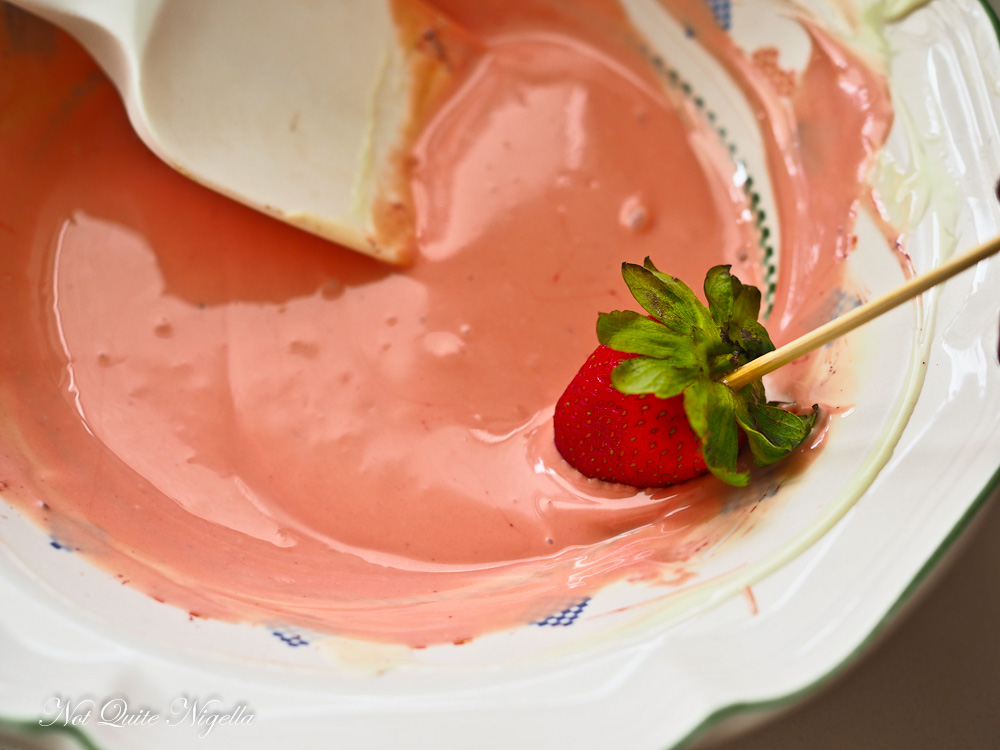 Step 1 - Line a large baking tray with parchment. Melt chocolate in a microwave or over a double boiler until smooth. Take a skewer and insert it into the calyx end of the strawberry. Roll the strawberry in the white chocolate and drain well on the side of the bowl. Repeat with the remainder of the first lot. Place on the tray and sprinkle some dried rose petals on top. 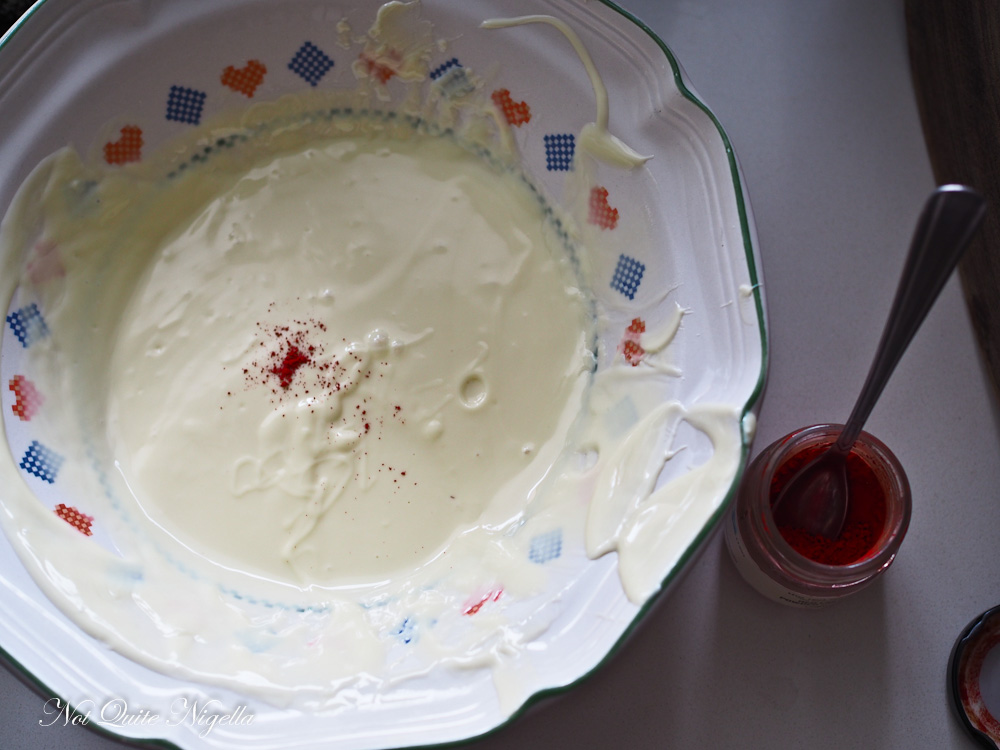 Step 2 - Take a small amount of the food colouring and add it in stirring well. You want just a faint blush. Repeat with the next lot of strawberries. Then add more colouring and dip the third lot. You want the last lot to be quite bold to create the ombre effect. Allow to set in the fridge and store in the fridge if it is hot. 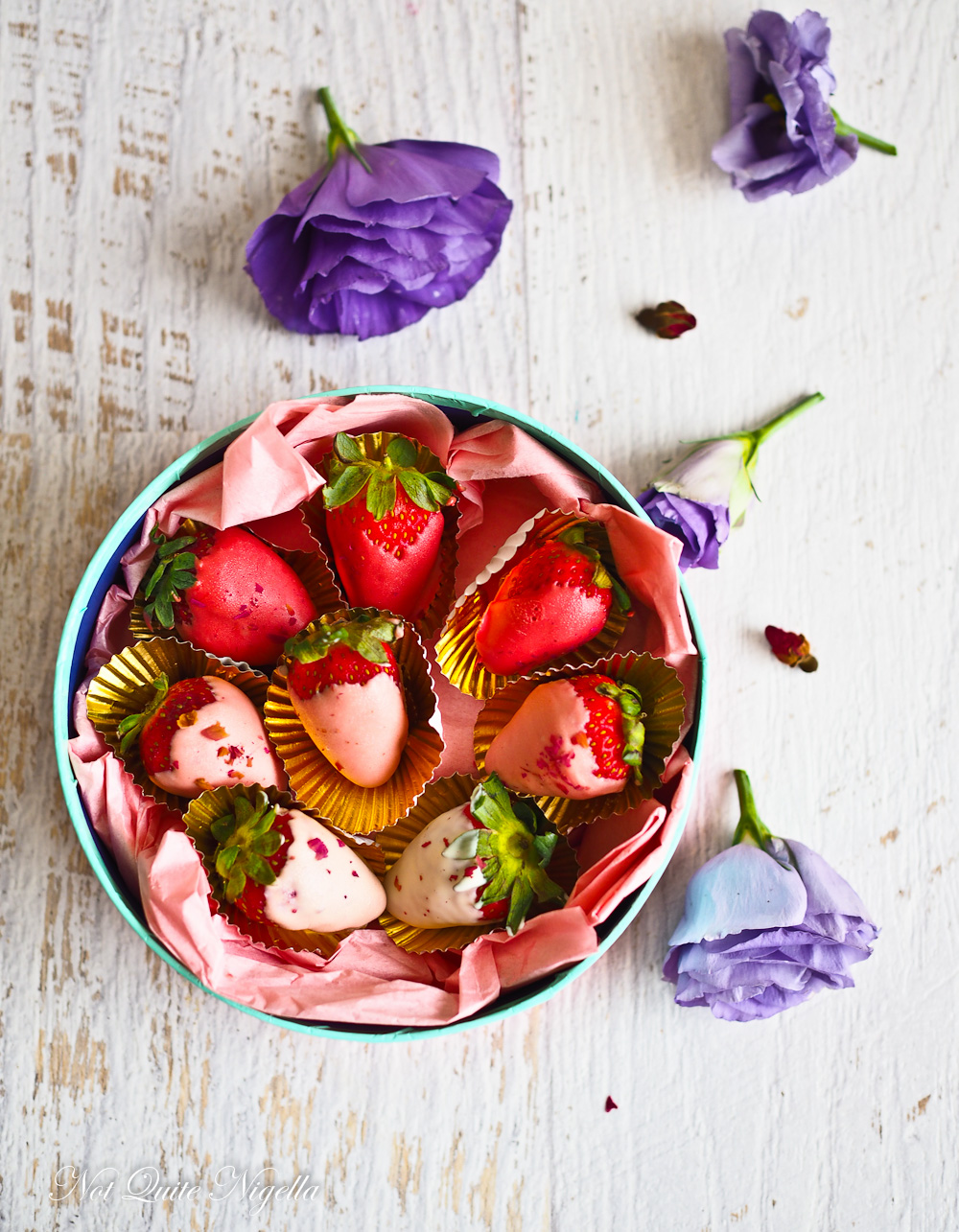