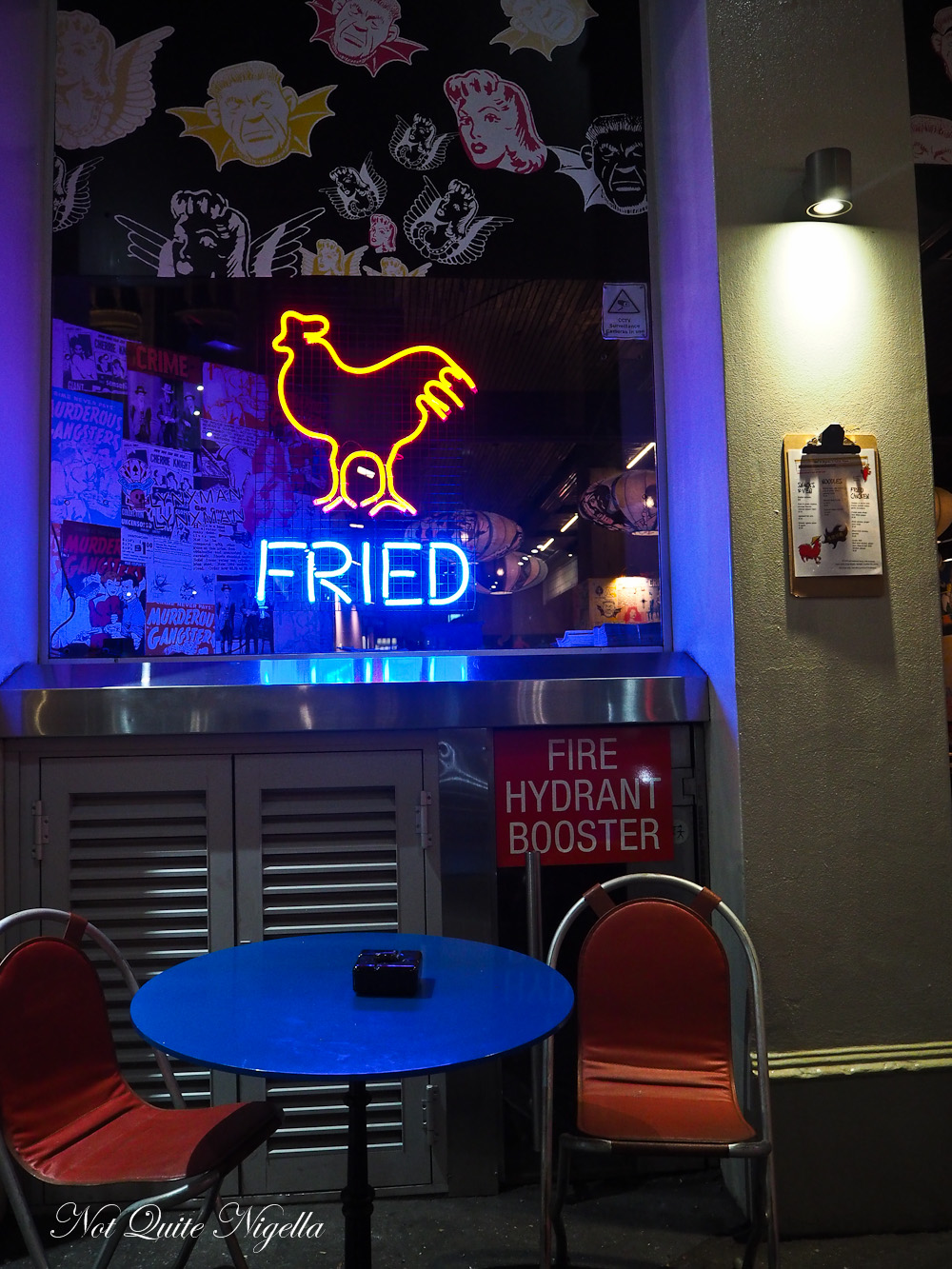 A night out in Sydney's CBD starts with a quick meal at Work In Progress, an Asian eatery from Merivale and Papi Chulo head chef Patrick Friesen. Originally meant to be a temporary venture for March only, its won ton soups, crunchy agedashi tofu and range of Korean fried chicken have proved so popular it is staying open indefinitely. Dessert is a 10 minute walk down George Street where ice cream parlour and Instagram hit Aqua S churns out soft serve ice cream surrounded by a halo of fairy floss, with toasted marshmallows, caramel popcorn or popping candy atop fortnightly changing flavours.

The man striding in front of me is having a rather animated conversation with his friend and it's only when we stop at a light that I hear the last words that he says, "...and next thing you know we'll all be eatin' noodles and this Asian fried chicken business!" gesturing high into the heavens.

What is one man's nightmare might be another person's dream and while he is envisaging all sorts of things, good or bad, my mind is wandering to a good place. One where we can order bowls of noodles and Korean fried chicken. Which is lucky because we are headed toward such a place. 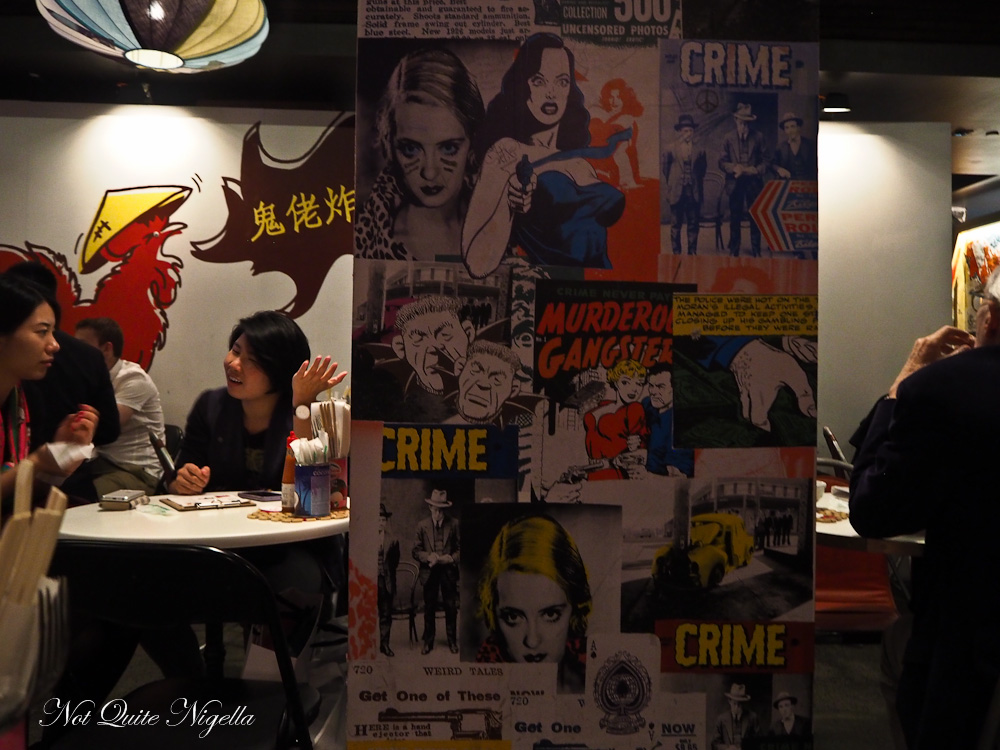 Papi Chulo's head chef Patrick Friesen is behind "Work in Progress", a bar and eatery located on King Street in Sydney's CBD. Patrick says, "Work in progress was inspired by food that I like to eat. Whether it's eating wonton soup for breakfast before heading to work or Korean fried chicken after service with beers."

Where does he get his inspiration for Asian food? "The inspiration for Asian food is simple - I love eating Asian food. I really only cook things I like. There's no rose water or green capsicums on any of my menus, that's for sure. I've just learned Asian food from Dan Hong, Jowett Yu and my big brother Bao La. A lot of experimentation and a lot of late night eating really is how I have learned. I'm also really good at making poutine."

He grew up in the Canadian town of Steinbach in south eastern Manitoba, population 13,500. He moved to Australia in 2009 after Steinbach experienced a week of -40°C weather. He first moved to Brisbane and then to Sydney at Guillame at Bennelong, Ms G's and Papi Chulo where he is one of the head chefs.

Work in Progress is subtly signposted, the clue is the neon chicken and the word "fried" above it. Originally meant to be open just for a five week stint starting with March into Merivale, it has proved so popular that it is staying open indefinitely. 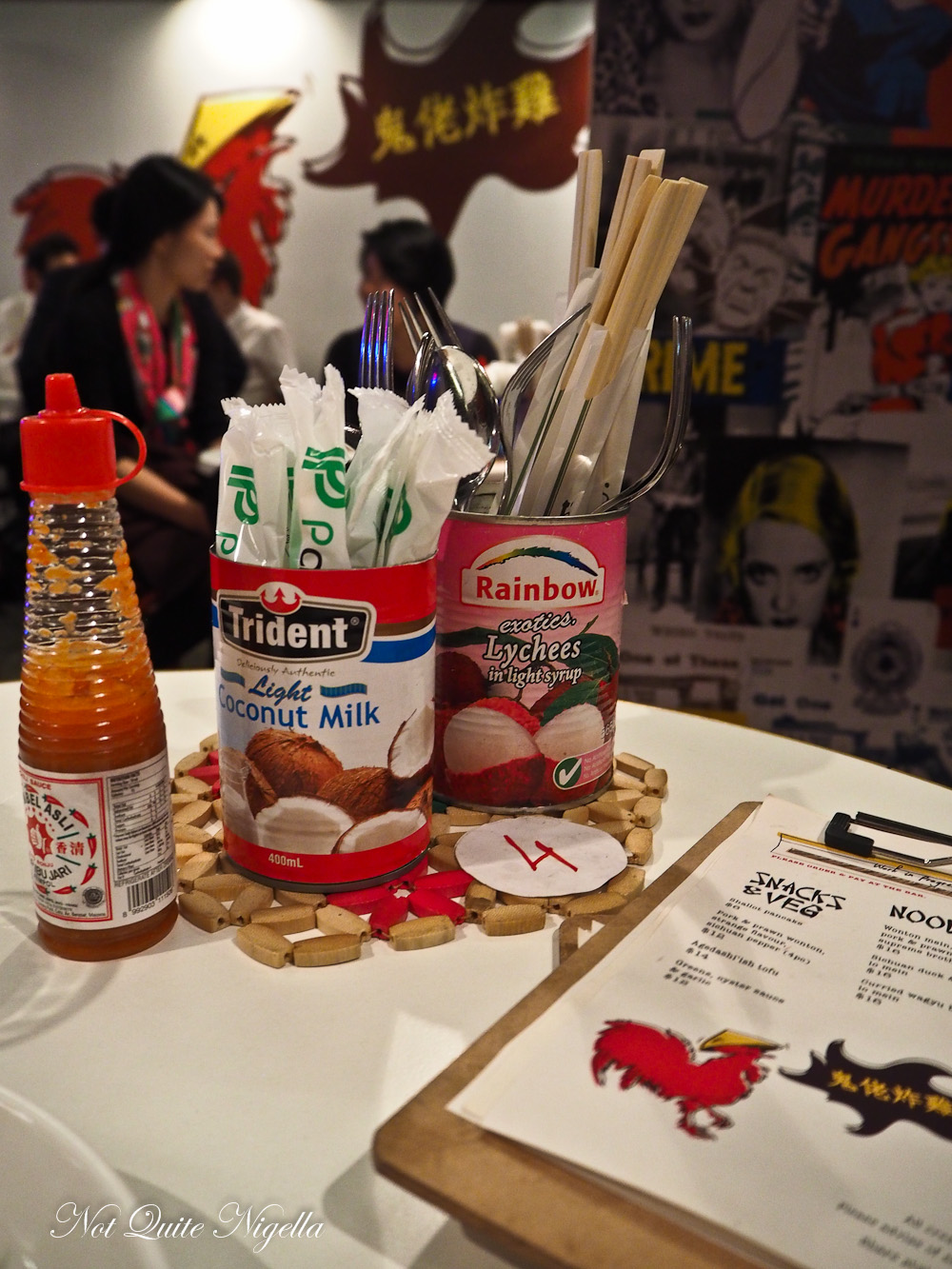 It's a Thursday night and fairly busy although there are a few tables available. We sit down at one table and they bring us menus and explain that we can order at the counter. The food menu is one page long and there's a cocktail list on the second page but I try and stick to cocktails on a Friday and Saturday only so we help ourselves to the water at the water station and take a seat after placing an order at the counter. The bill comes to an impressive $64 which is not bad at all for two people that have ordered enough for three or four. Cutlery is on the table in empty lychee and coconut cream containers and there are forks, spoons and chopsticks. The only thing missing is a tissue box (although there are paper napkins)! 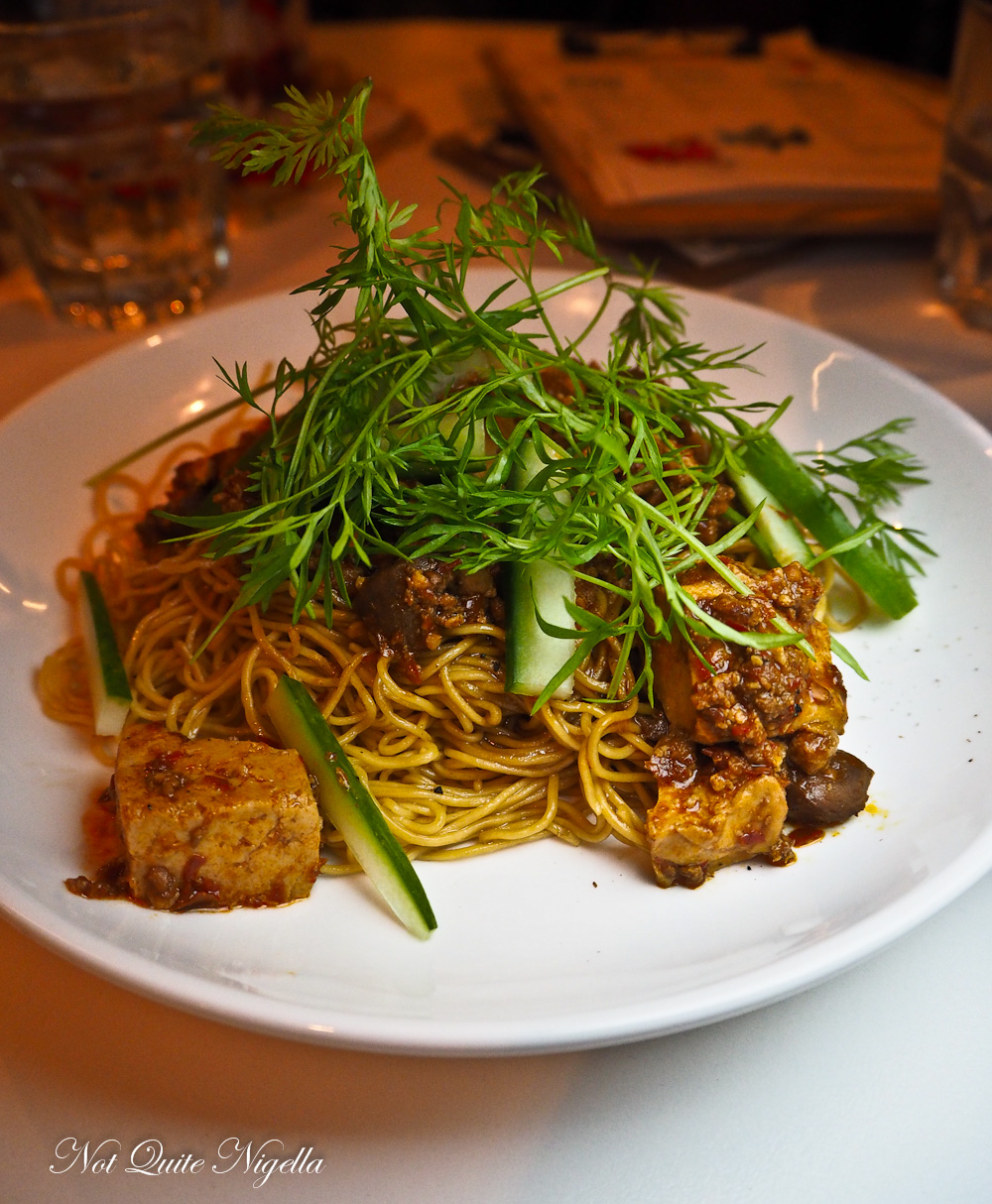 The food is fast to arrive and the first item is the Sichuan duck and tofu cube lo mein with perfectly textured egg noodles and a rich, spicy sauce with mince duck and offal. The flavours are intense and well balanced and this is a great dish. 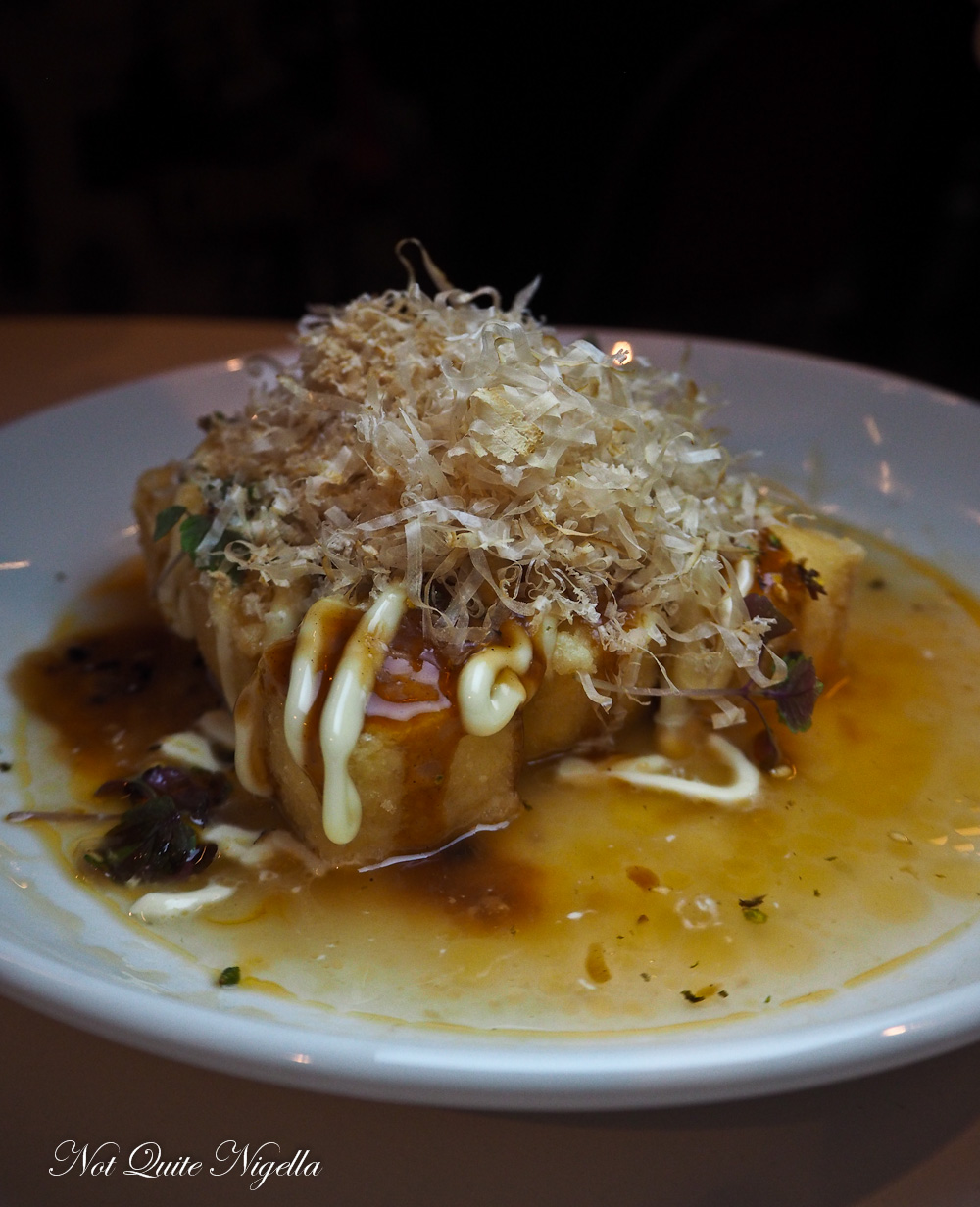 This is one of the better agedashi tofus that I've eaten. I can't remember actually liking one as much even when I lived in Japan. There are nine squares of perfectly crisp on the outside tofu that are soft and silky inside. The deep fried pieces are rolled in salt sugar and served in dashi with bulldog sauce, furikake and a heavy blanket of itogaki bonito flakes and squiggles of Japanese mayonnaise. I have to stop myself with these and quite honestly who ever said that about tofu? 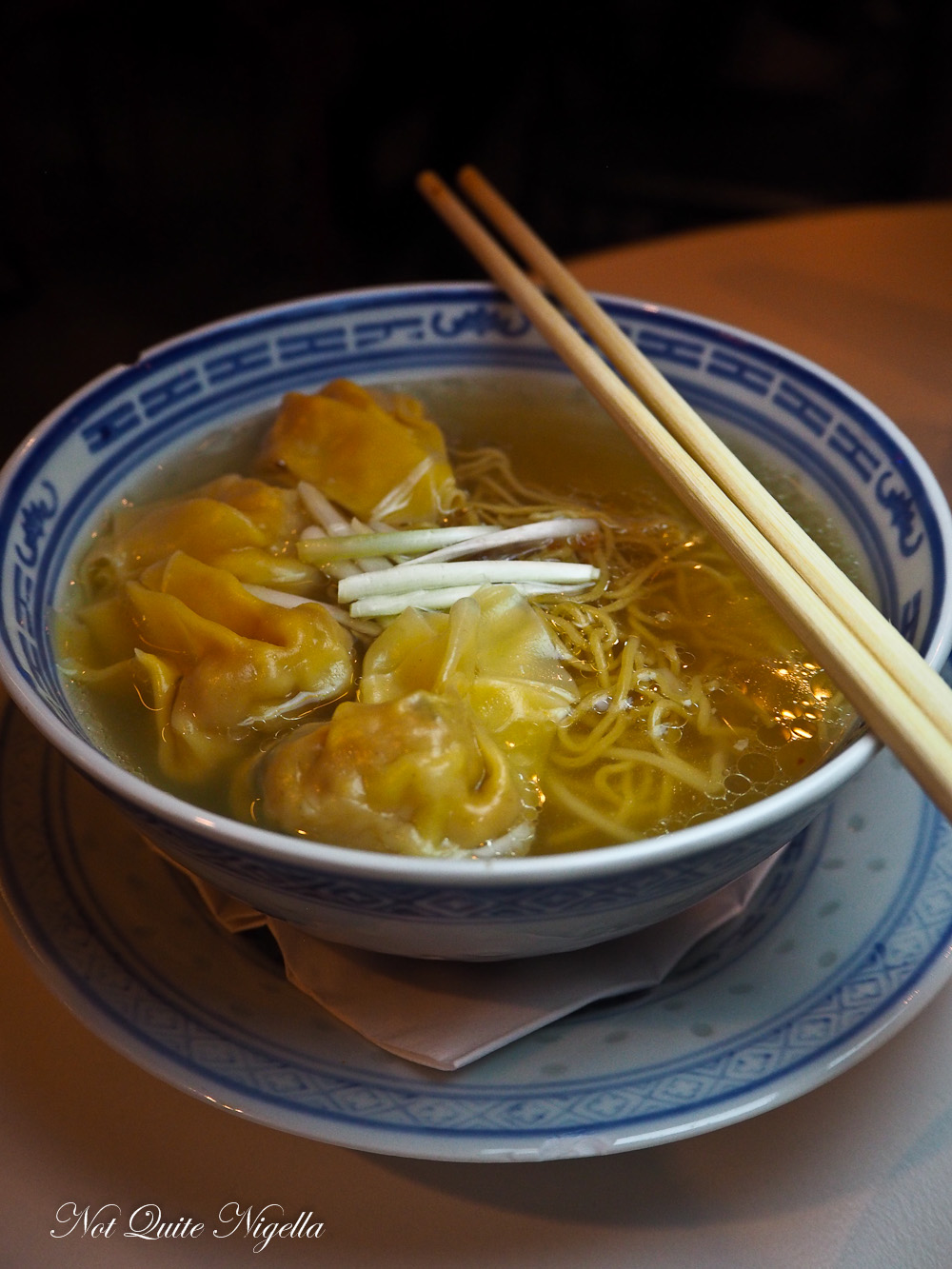 The bowl of wonton mein is admittedly smaller than what you would get at a Chinese restaurant, particularly for the price and most of the criticism that I've read is usually about the price. There are four won tons and some egg noodles. The soup is very good, singing with flavour and the pork and prawn wontons are perfectly seasoned and soft with a good whack of ginger in them to lighten them. Patrick explains the noodles are "Made from egg, alkaline water, salt and flour. We buy them from Jangs noodles who is an uncle to Kylie Kwong. Our stock is made from smoked ham hocks, pork bones, chicken bones, dried fish, dried prawns and kombu. It's cooked gently for about three hours to have a light but full flavoured soul." 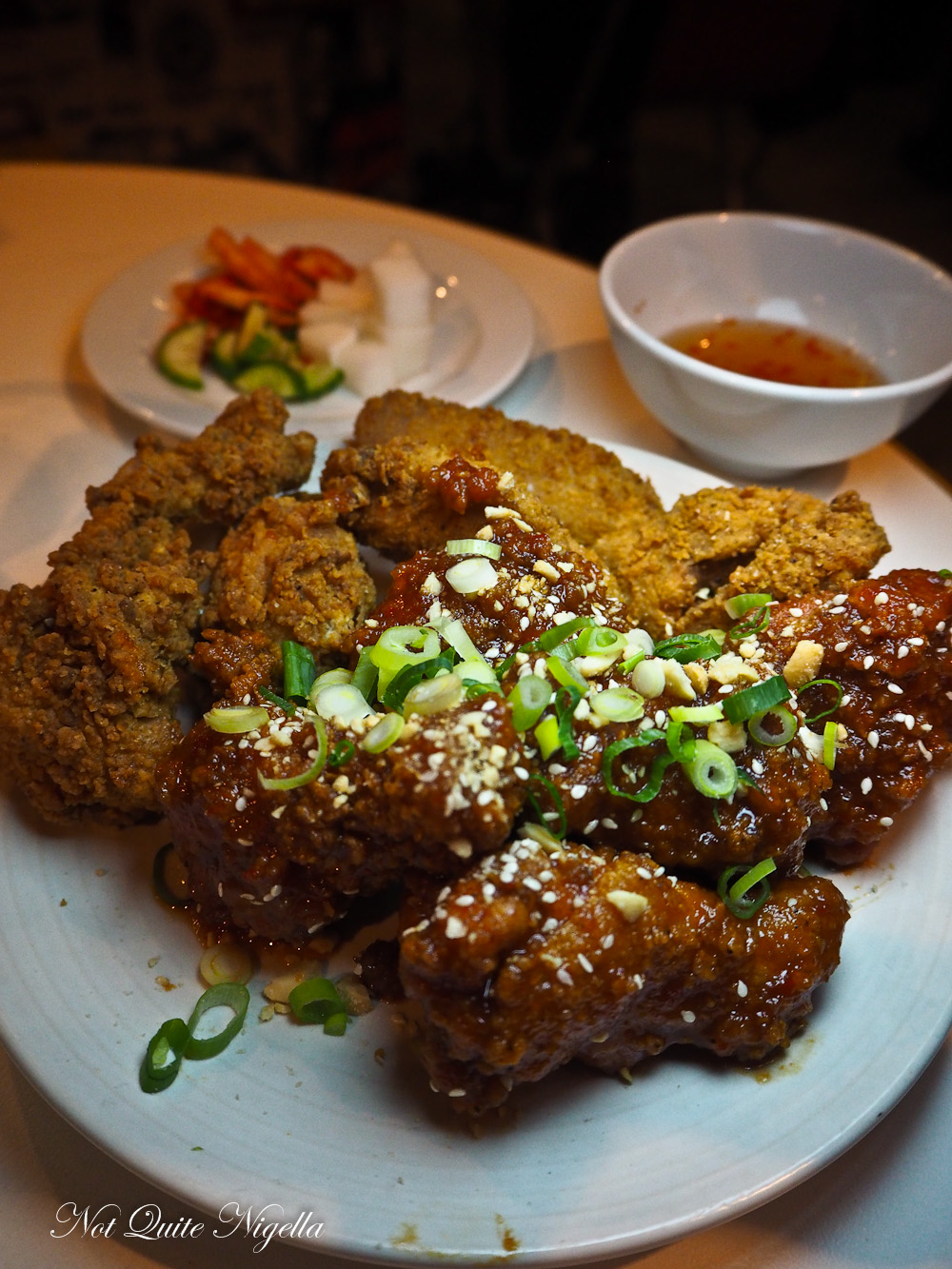 At first I think it is an $88 combo of chicken and I'm wondering exactly how large it will be but then I realise that it's a half half serve of fried chicken with ginger nuoc cham and half fried chilli chicken with peanuts. The fried chicken is crunchy and golden with tender and juicy bone in pieces. However the ginger nuoc cham barely registers against this and I need to sambal on the table to give it a boost. I prefer the saucy chilli chicken with crunchy peanuts and a thick almost sweet and sour sauce to it - hell I even ate three pieces of it. There goes my three bite rule. I might have to change it to the three piece rule...

I had heard that there are sometimes cinnamon buns but there wasn't any mention of dessert on the menu. Later I asked and Patrick explained, "Cinnamon buns are made really whenever I have the time to make them. We don't have a mixer and they have to be made by hand. I grew up smashing cinnamon buns for breakfast when my mom made them and it was always a special treat. Now I make them to show what I grew up with and have a taste of home while living so far away." 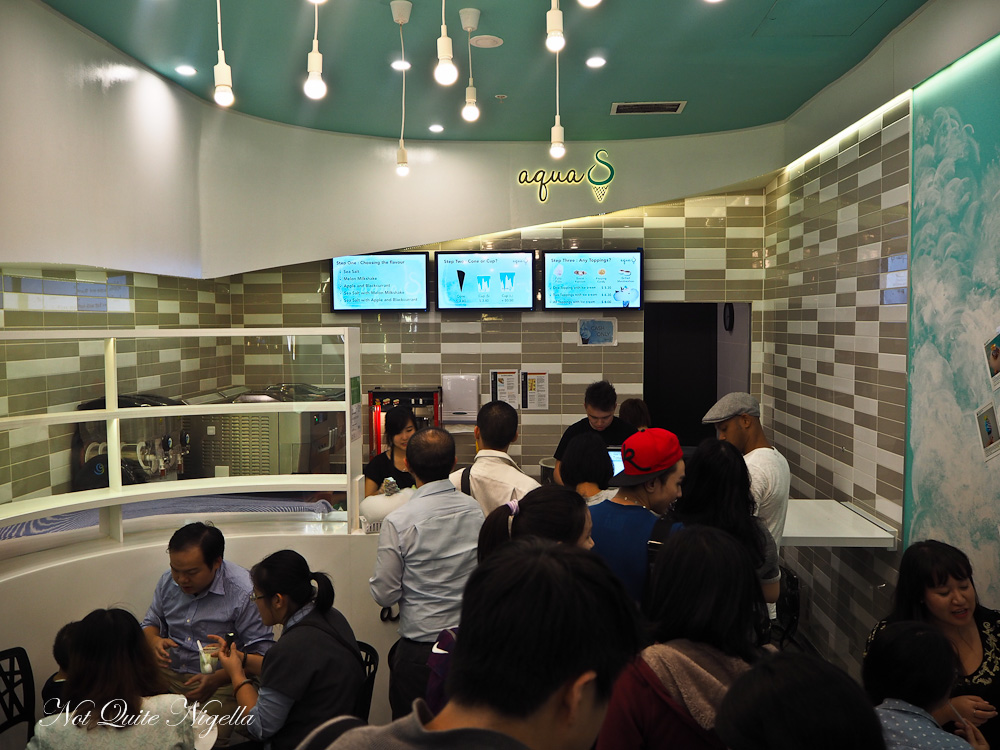 So jonesing for a dessert, we decide to head 10 minutes' walk south towards another very popular place that sells soft serve with a difference. Thankfully it was an unseasonably warm Autumn day so it felt like Summer all over again! It also meant that it was the perfect weather that evening to try out Aqua S, the soft serve ice cream that won Instagram. 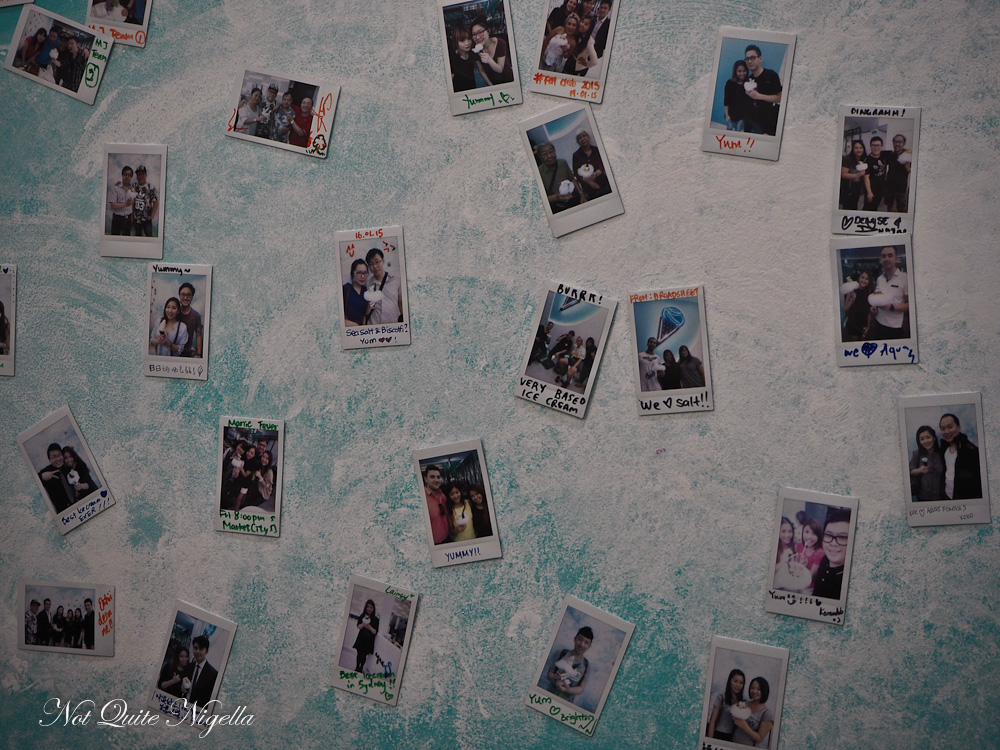 Located inside Regent Place on George Street we snake our way through the building to find it - the giveaway is the number of people holding soft serve cups and cones. The system is this: first choose a flavour out of five of them (sea salt, melon milkshake, apple blackcurrant, or sea salt with melon milkshake and seasalt with apple blackcurrant although these change every fortnight or so). 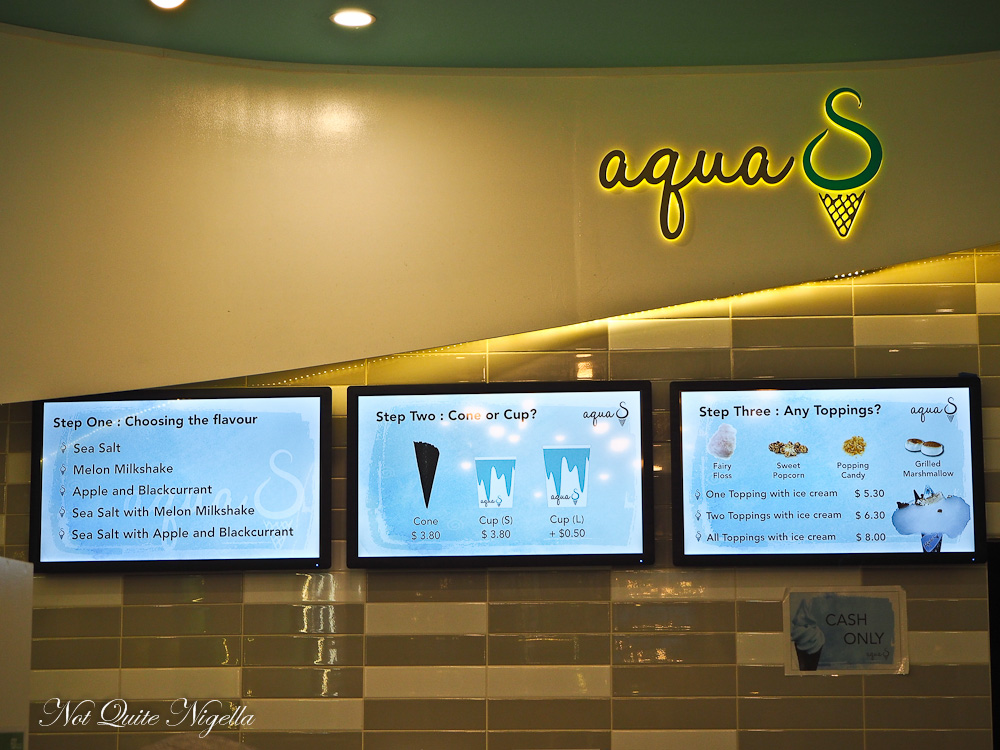 You then choose whether you want it in a small or large cup or cone and then see whether you want the additions. There are four of these including popping candy, toffee popcorn, fairy floss and grilled marshmallow. To have everything in a cone is $8 so it's not the cheapest soft serve you can get but it certainly is one that attracts attention. 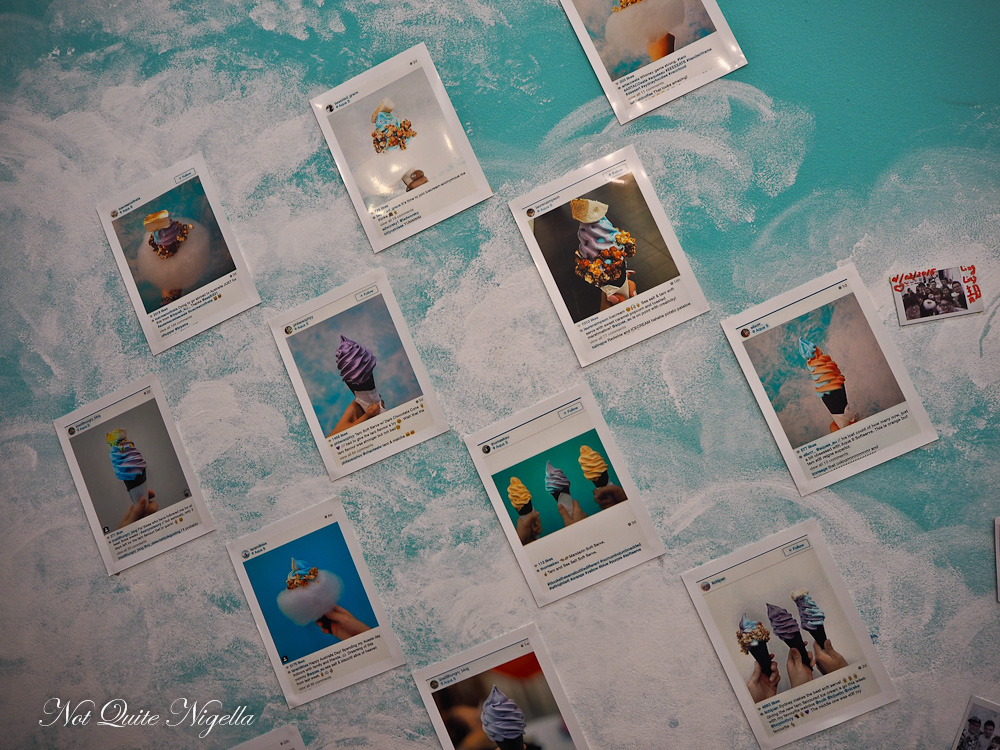 When I bring both of them to the table and hold them up for the photo everyone that walks past stares and lets out an involuntary "Wow". It is the Zsa Zsa Gabor of soft serves - fluffy, extravagant and over the top. They stop, peer further into the shop and some line up for one. It really is the best sales tactic. There's the wall of painted fluffy white clouds on an aqua background where everyone gets photos taken of their soft serve or selfies with the soft serve. 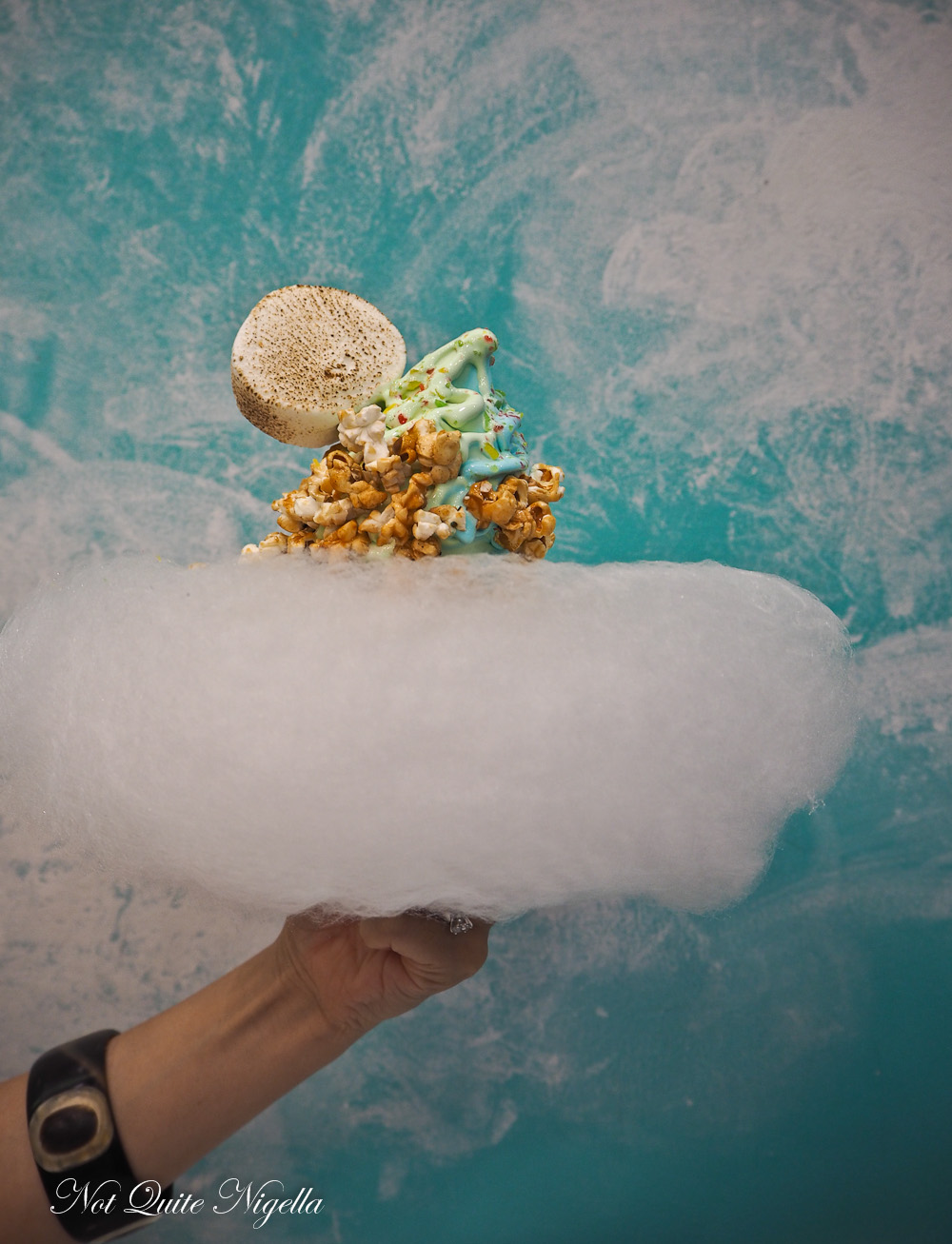 Soft serve with all toppings $8

So how was it? For all of the attention the fairy floss gets, it's incredibly sticky and hard to finish it all and goes soft and sticky very quickly. I suspect it is the thing that rookies like ourselves order while those that come back go for a cup and less conspicuous additions. The toffee popcorn pieces are good and crunchy while the pop rocks mostly disappear quickly. The marshmallow is secured with a chocolate Pocky stick but it's greed rather than need that we are exercising here. I'm too busy really trying to wrangle the fairy floss and the dripping soft serve. 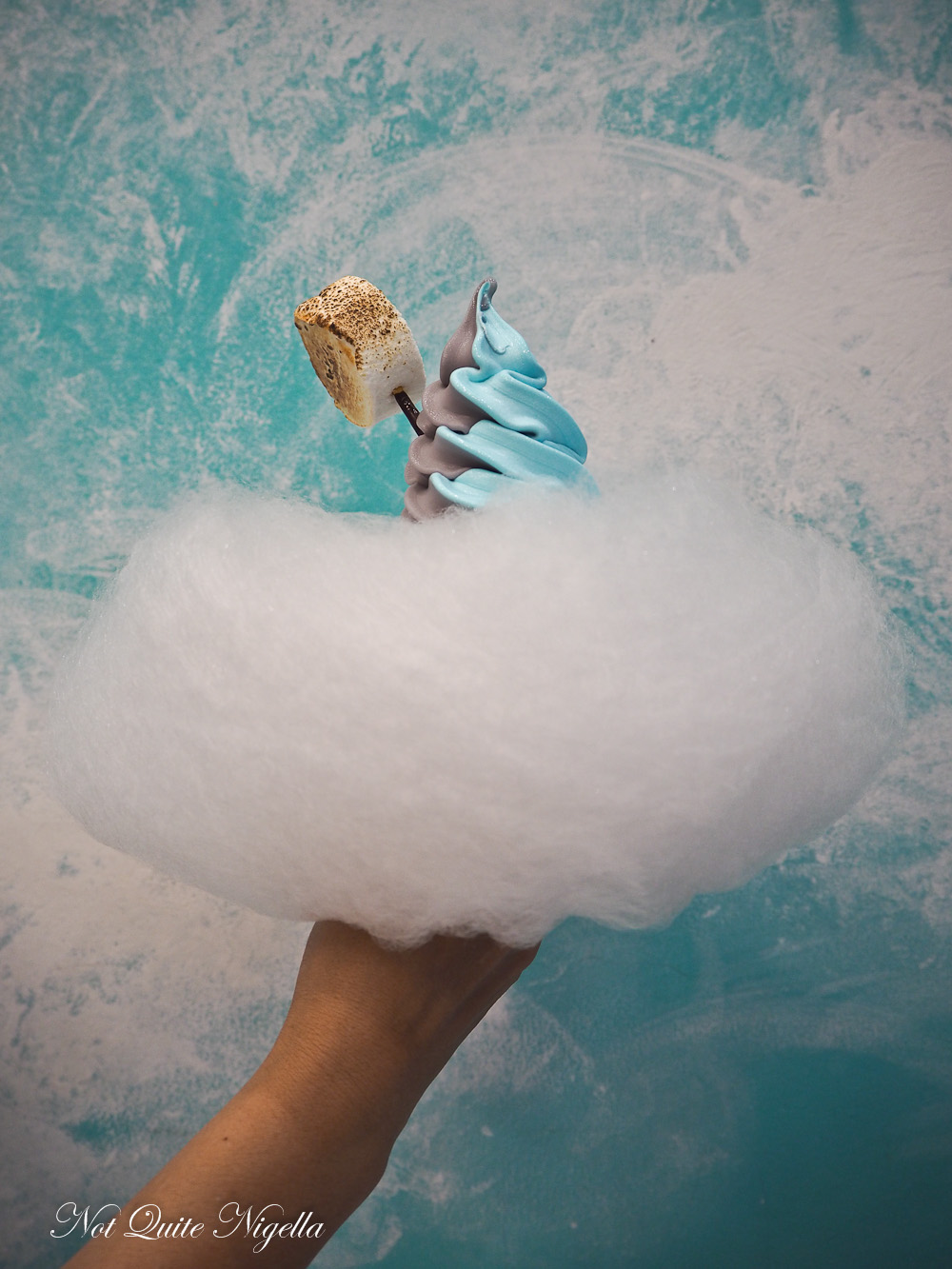 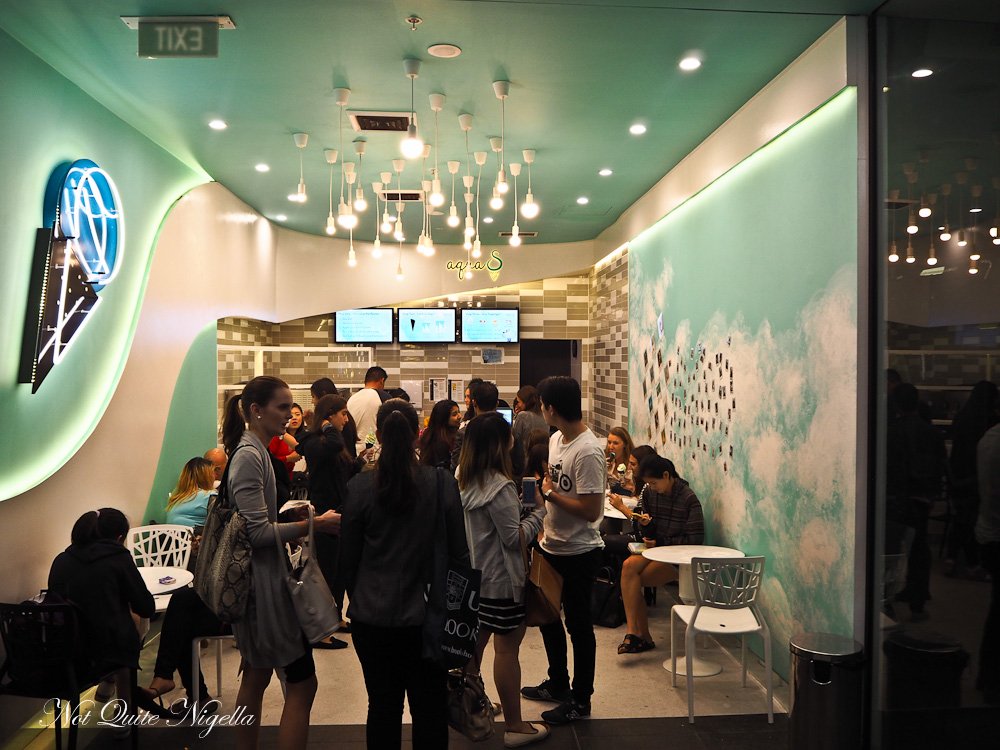 We aren't able to finish our cones and we look down and see our table covered in drips with fairy floss and sticky bits. I fish out a wipe from my bag (I'm not Monk, I just happened to have one from an overseas trip) and it still can't get it all off! Still, I'm curious about the next set of flavours...

So tell me Dear Reader, how do you envisage the future? And do you like going somewhere else for dessert for a change of scenery or do you usually stay put? And do you always order dessert? Have you ever had dessert as your dinner?

These meals were independently paid for