A twist on a regular Shepherd's Pie, this version has slow cooked lamb and a delicious Greek twist adding flavours like honey, lemon, oregano, feta and olives as well as extra virgin olive oil. Rich and creamy it's a dish that serves many people and is ideal for entertaining. 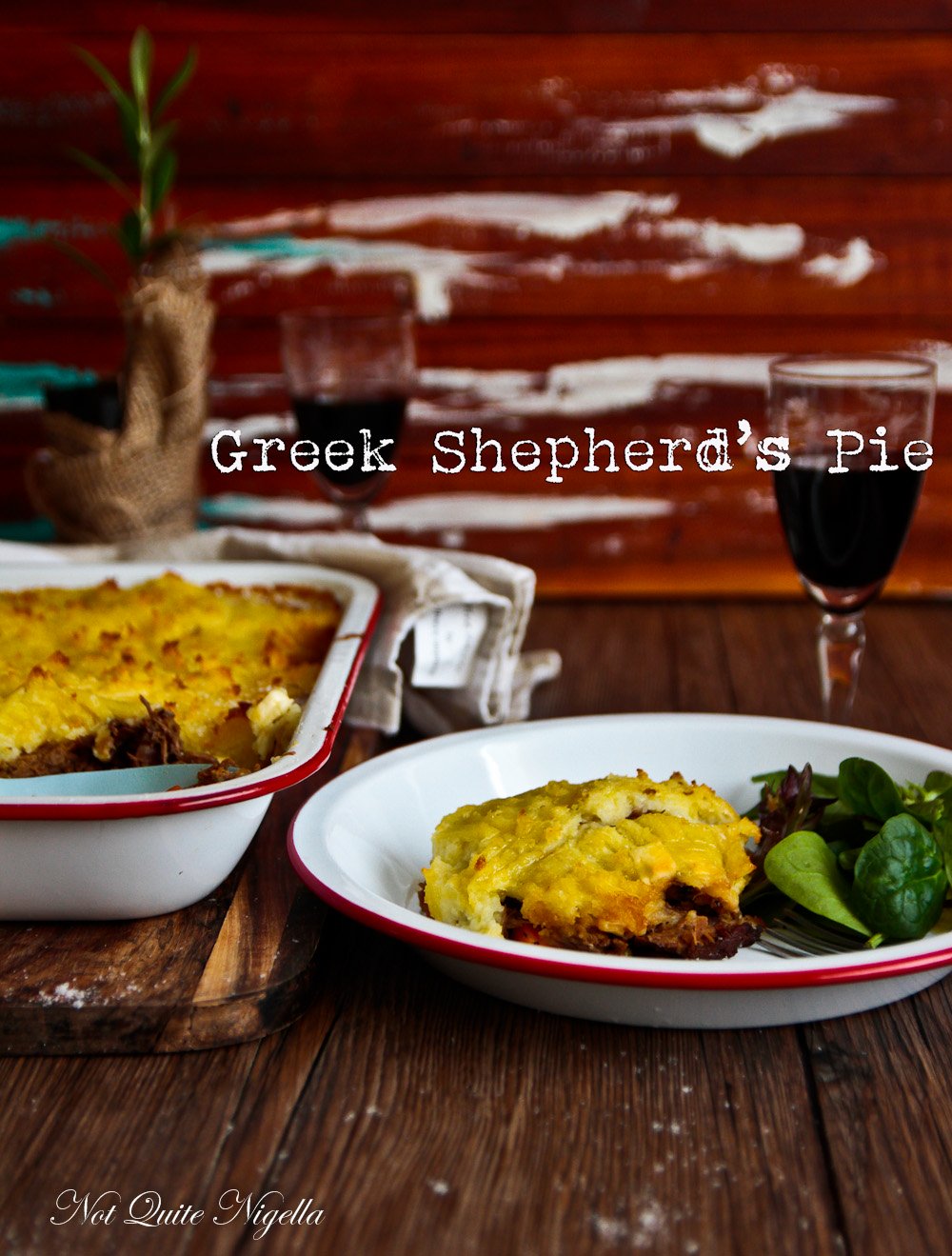 This recipe is brought to you by MLA

I'm going to start today's post off with an embarrassing confession that really shows how ignorant I am of a whole section of society: sportspeople. Up until the other night where I was attending the Legends & Lamb charity dinner, which was fundraising for Mates4Mates, I didn't realise that Sam Kekovich was a real person. I thought that he was a character, kind of like Dame Edna or Borat and that underneath that gruff, funny Australian exterior lay a comedian, giggling at the gills at the havoc he wreaked upon our country.

It was only when I was at a charity dinner for the Mates 4 Mates charity where he was emceeing that someone mentioned his AFL background and that Sam was actually real! And what I thought was his put on character was his larger than life natural comedic personality. Sam is the spokesperson for lamb who every year around Australia Day gets into trouble for saying something politically incorrect or for telling Australians that it is unAustralian to not eat lamb. He's kind of like your uncle that says occasionally inappropriate things, except he's really funny. So anyway it was no surprise that the main meat at this dinner was lamb. 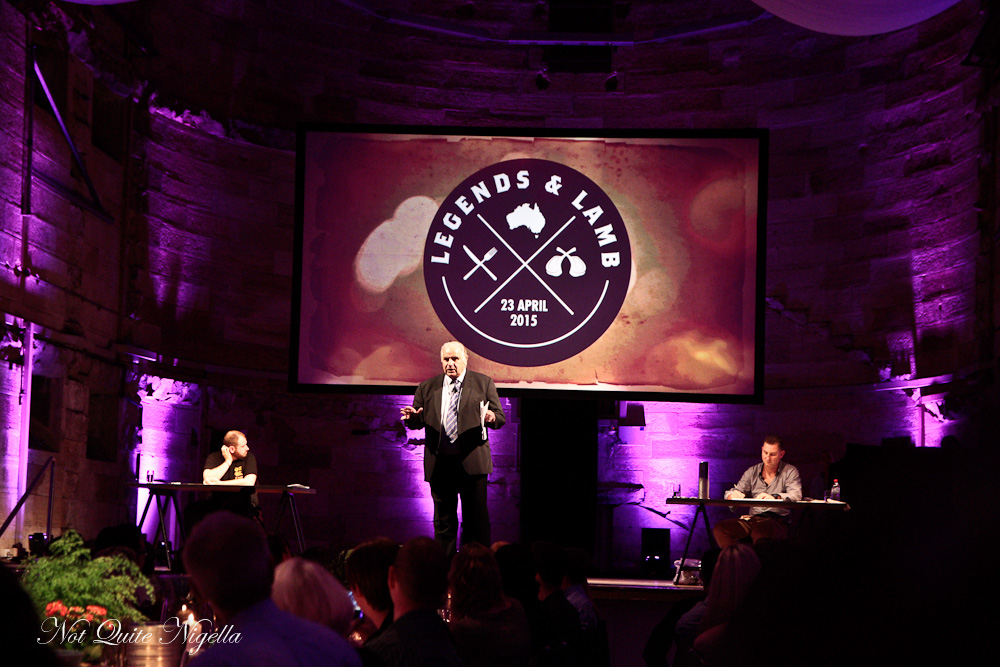 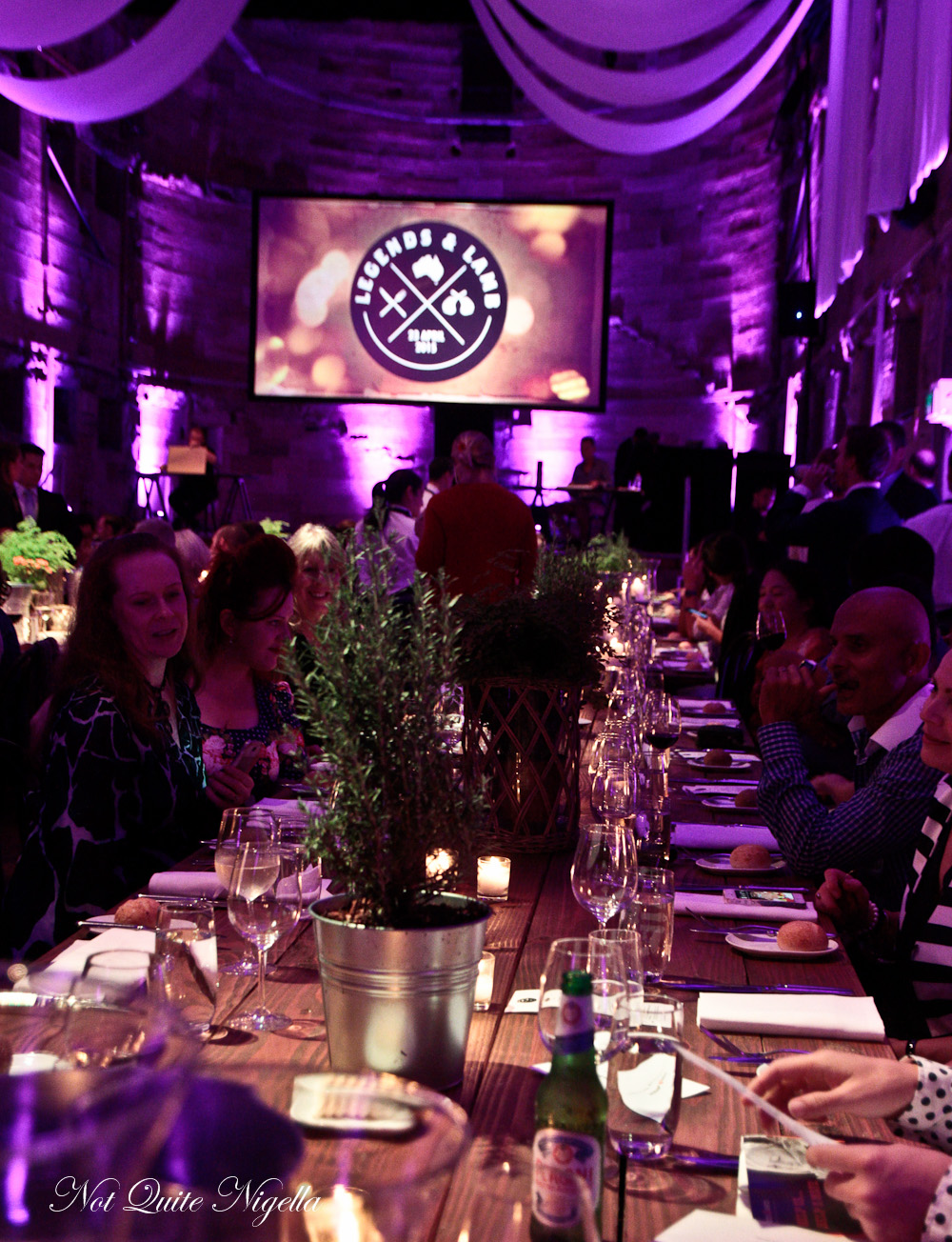 Along with Sam, food lover and cook Hayden Quinn was also there as a guest. The food was surprisingly good. I only say surprisingly, not as a slight to the chef Tom Walton from the Bucket List but only because catering for such large numbers often means that quality sometimes dips but the lamb shank pithivier with sweet pea puree was very good while the nine hour roast lamb came to the table steaming hot. 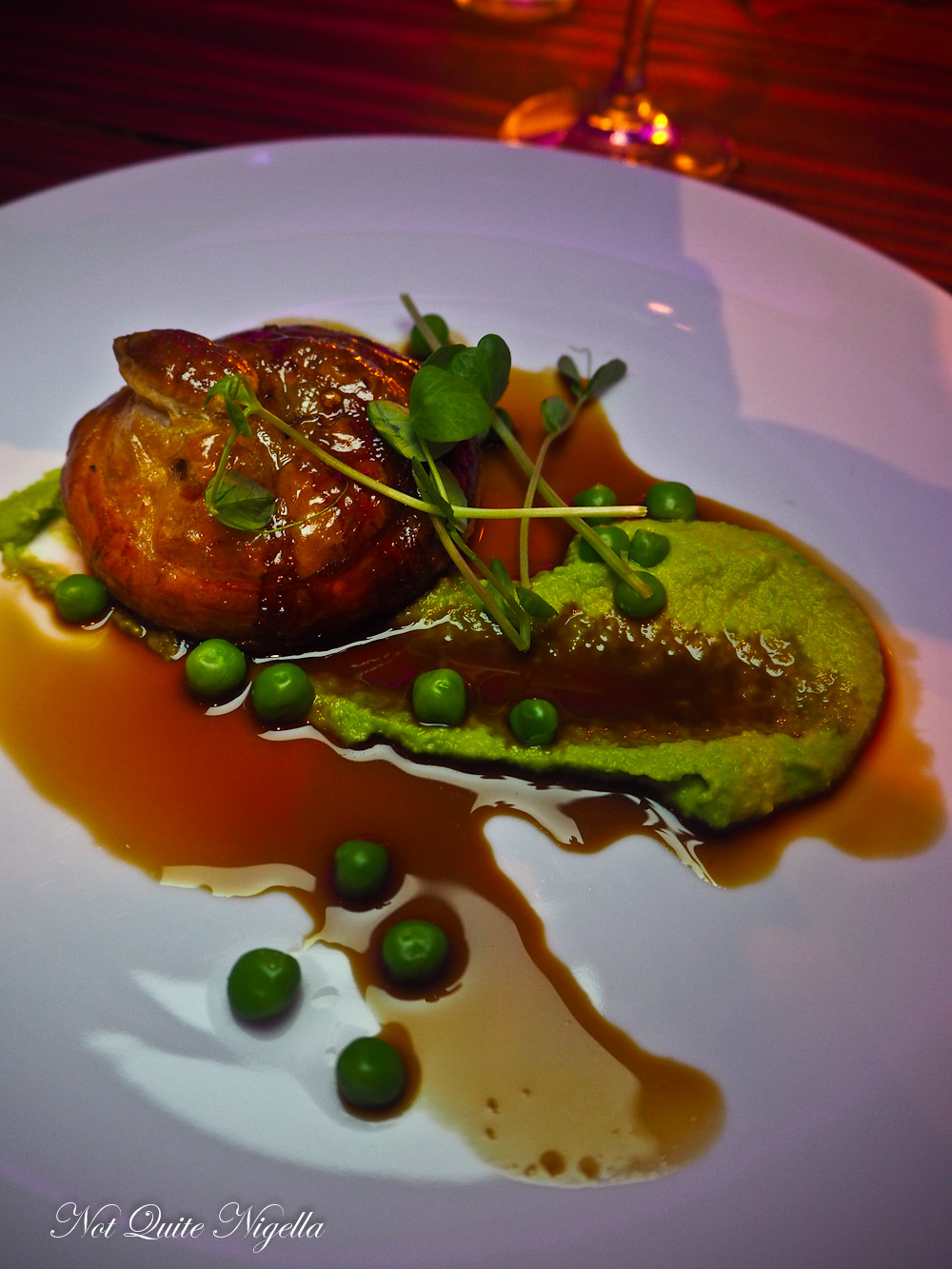 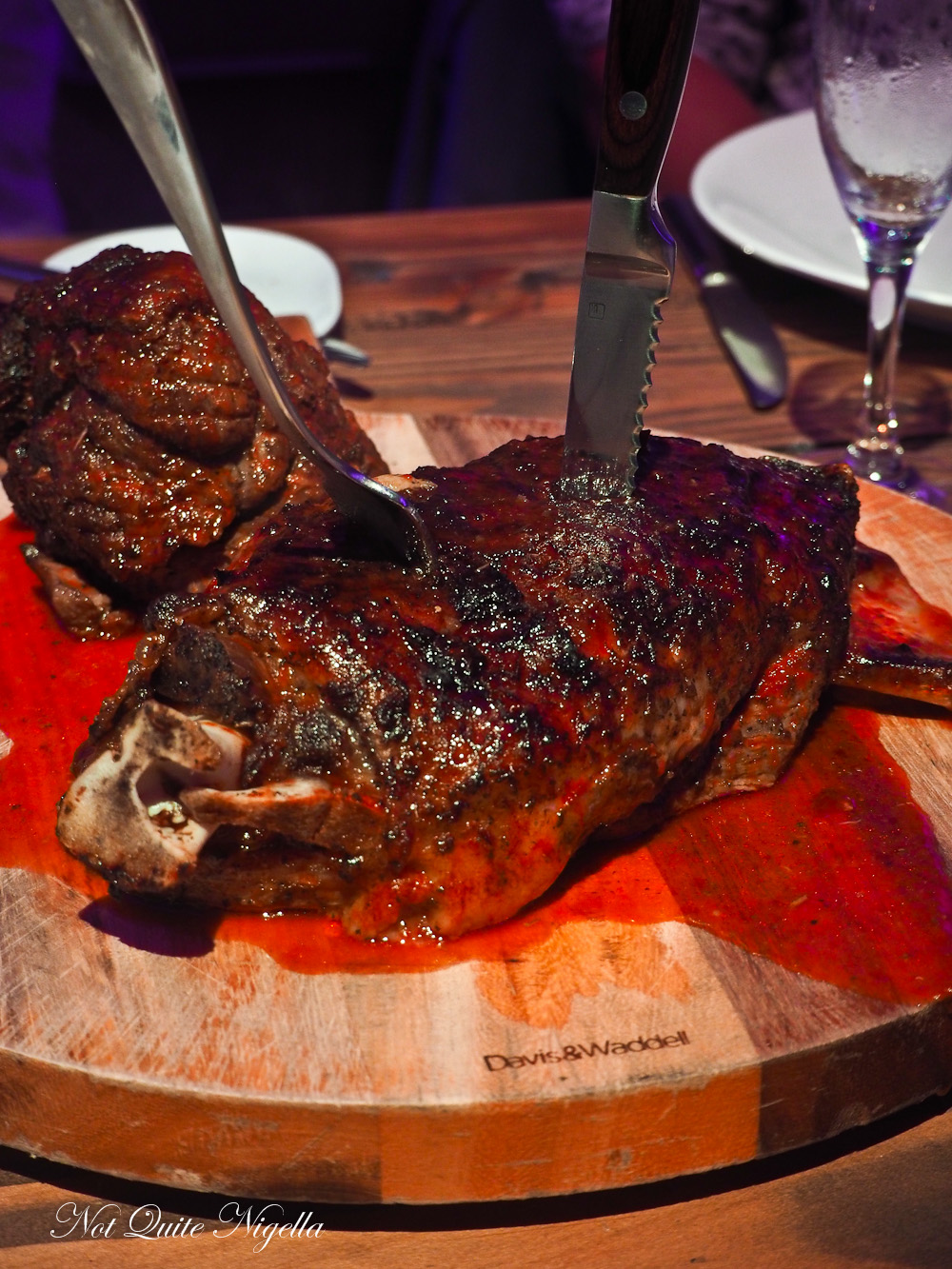 It was served share or family style which I always like as it brings a table together. The lamb shoulder and saddle cut like soft butter and had a light lemony touch. It was served with honeyed white, orange and purple Dutch carrots, a green salad and a creamy Paris mash that I just wanted to eat all of (but I didn't, it's rude I've been told ;) ). 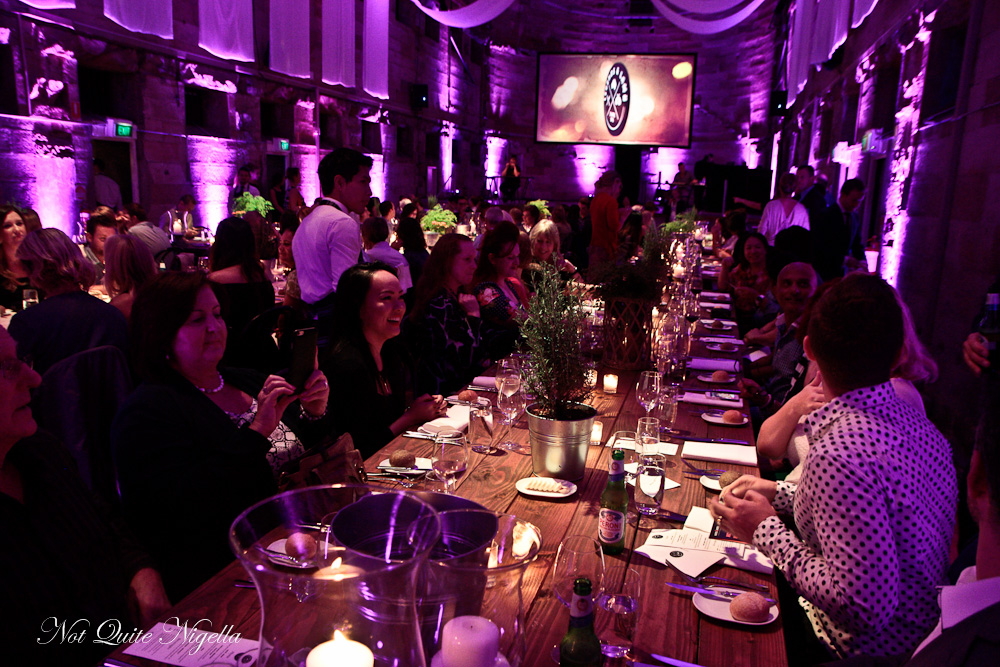 The evening had 130 guests and three guest speakers as the main idea behind it was to raise money for Mates 4 Mates, a military charity that provides crucial physical and psychological rehabilitation services for the Australian Defence Force (ADF) members who are wounded, injured or ill in the line of duty. There was ex Commando Craig Ball, Major Kelly Jackson and retired RAAF pilot Matt Hall. 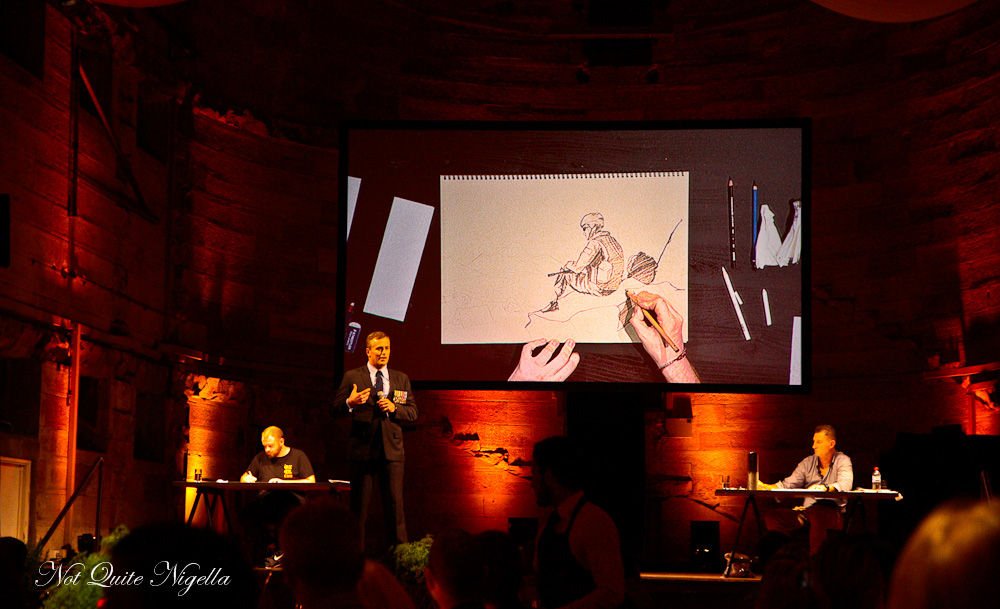 Each speaker brought a different aspect and talked honestly about their experiences and struggles working in the military. My heart ached for Kelly who talked about how they experience depression when they return from tours of duty and my heart soared when Matt showed us videos of him in the cockpit of a fighter jet. "Who has watched Top Gun 10 times?" he asked. Hello 50 times here!! 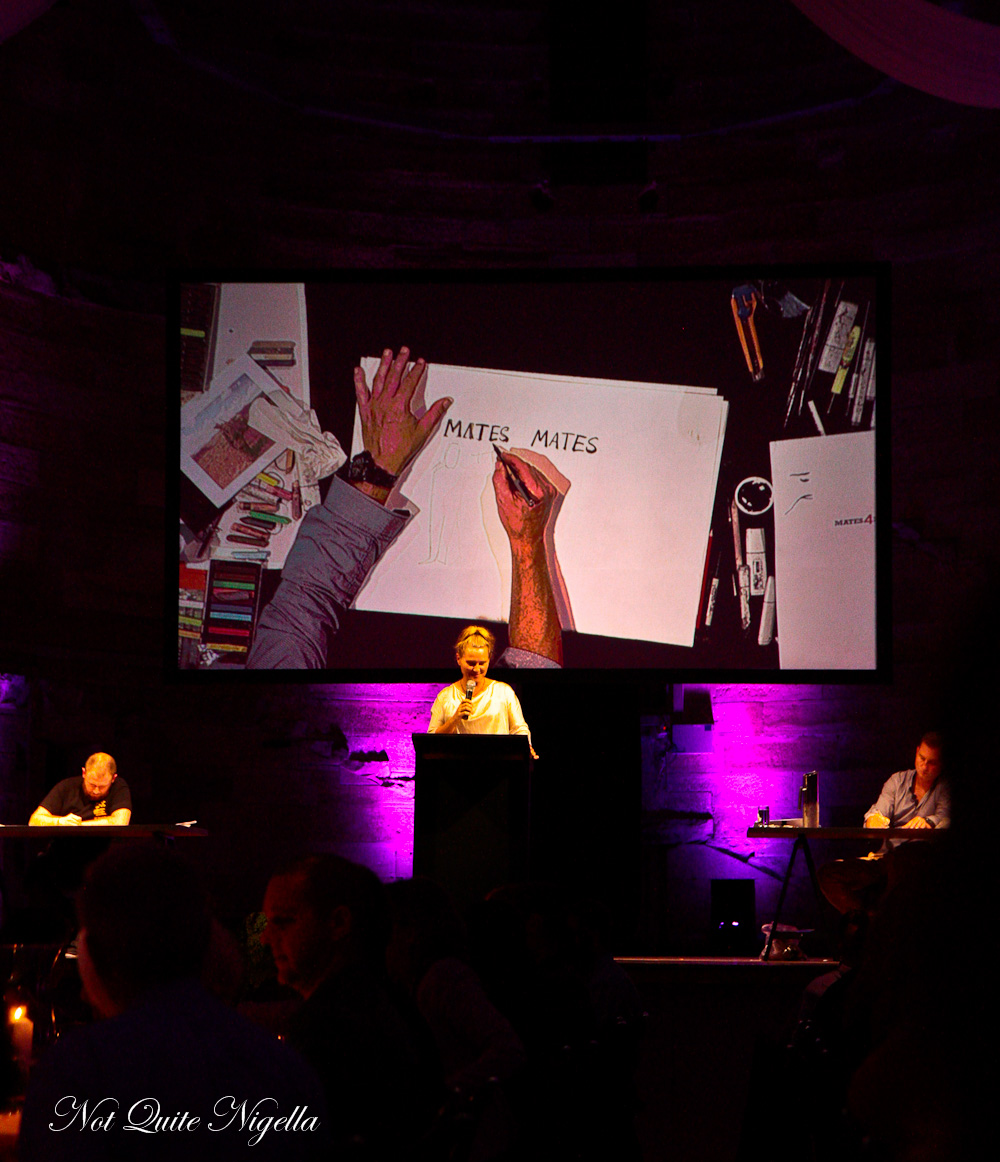 Alas I didn't win the prize of a trip up in the air in a fighter jet but the gentlemen that won it looked so happy that it really went to a deserving winner. At the conclusion of the night, everyone dug deep into their purses and donated money to Mates4Mates based on what they felt the evening was worth. 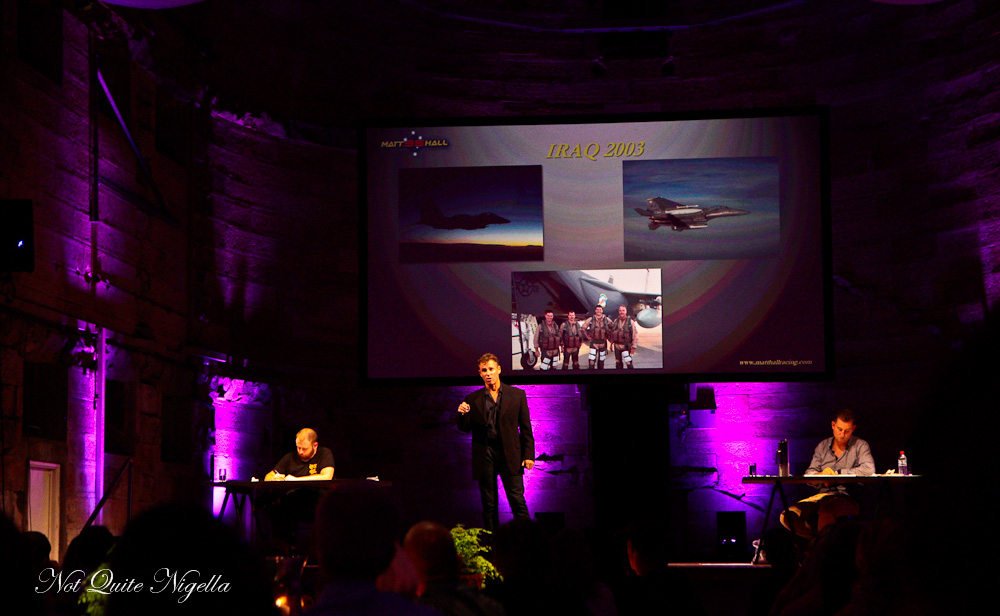 Today I'm sharing with you a lamb recipe. Every year when Autumn and Winter rolls around I wonder how on earth I coped with it the previous year because I am simply not a cold weather person. But I know that the best thing about Autumn and Winter is cold weather food. Things like stews, pies and bakes. And this is a twist on a classic Shepherd's Pie - with Greek flavours. 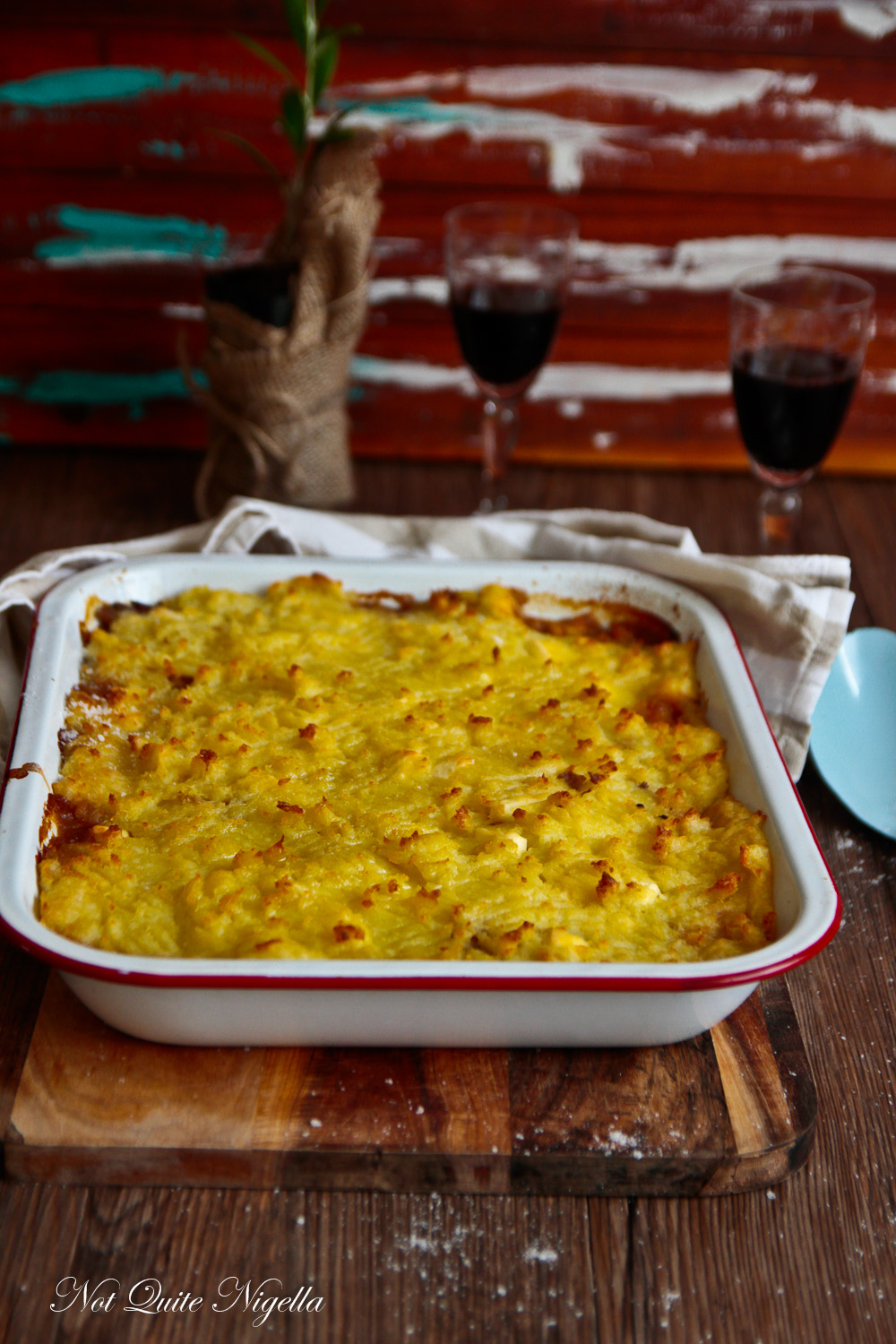 You may think I've thrown every Greek flavour that I know in this pie and you'd be quite right. There's oregano, lemon, feta, olives, olive oil and honey but I promise that each has its place. Because lamb is so rich, lemon is a must to lift it and the feta dots the creamy olive oil rich mashed potato topping. The honey and olives season the lamb with sweetness and savouryness and while I've used a slow roasted leg of lamb, you can certainly substitute it with mince to make it even faster to make. And this is an enormous dish that serves eight people because the other good thing about colder weather is barricading yourself in and having friends over.

So tell me Dear Reader, which charities do you support? Are you a fan of Top Gun? What is the most times you've watched a movie and which movie was it? 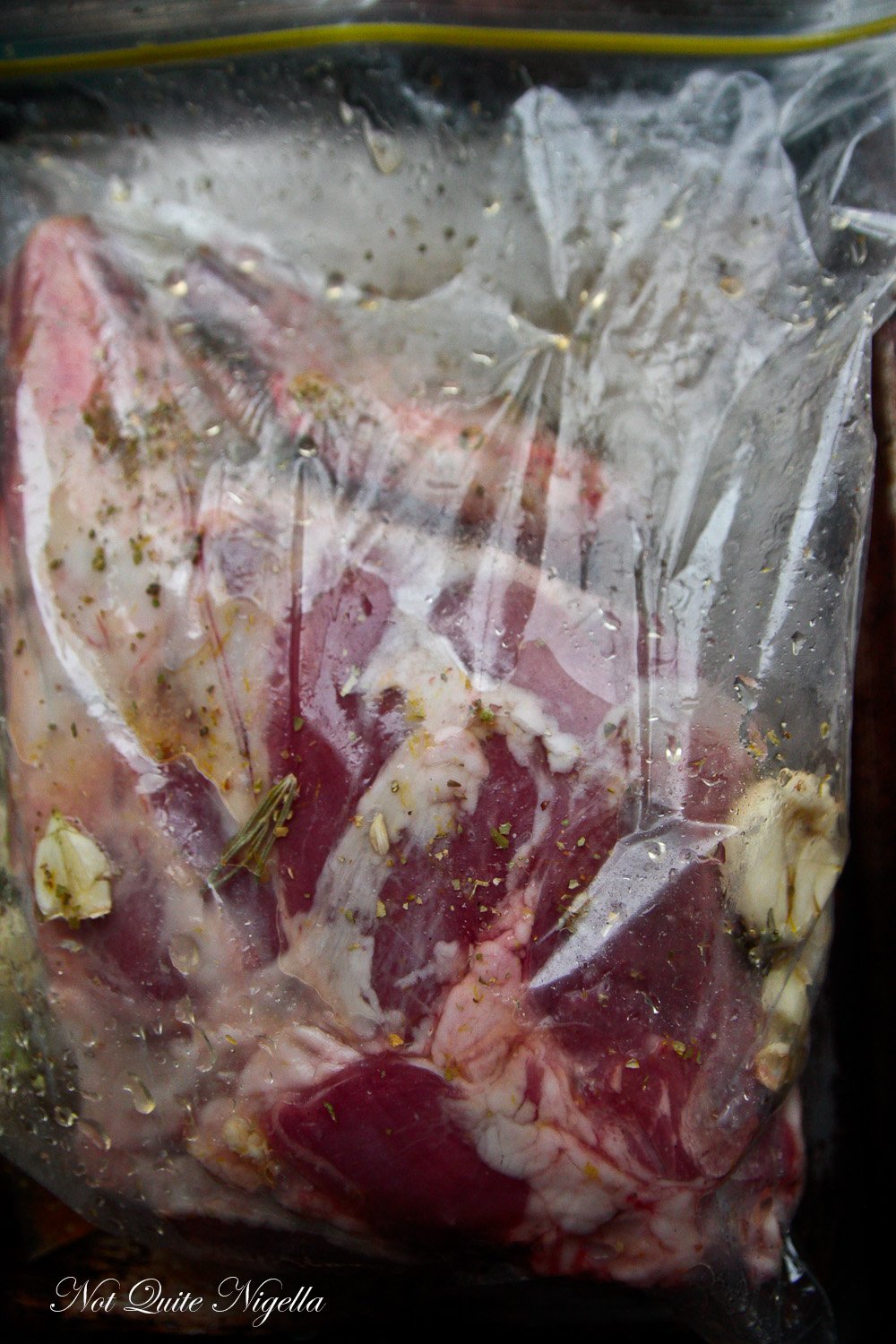 Step 1 - Place the lemon juice, zest, oregano and garlic in a large ziplock bag and marinate the leg of lamb for 1-2 hours turning occasionally. Preheat oven to 160C/320F. Line a baking tray with parchment (to make it easier to clean) and place the lamb on the tray with the marinade. Season generously with salt and pepper and roast for 3.5 to four hours basting every 30 minutes or so. 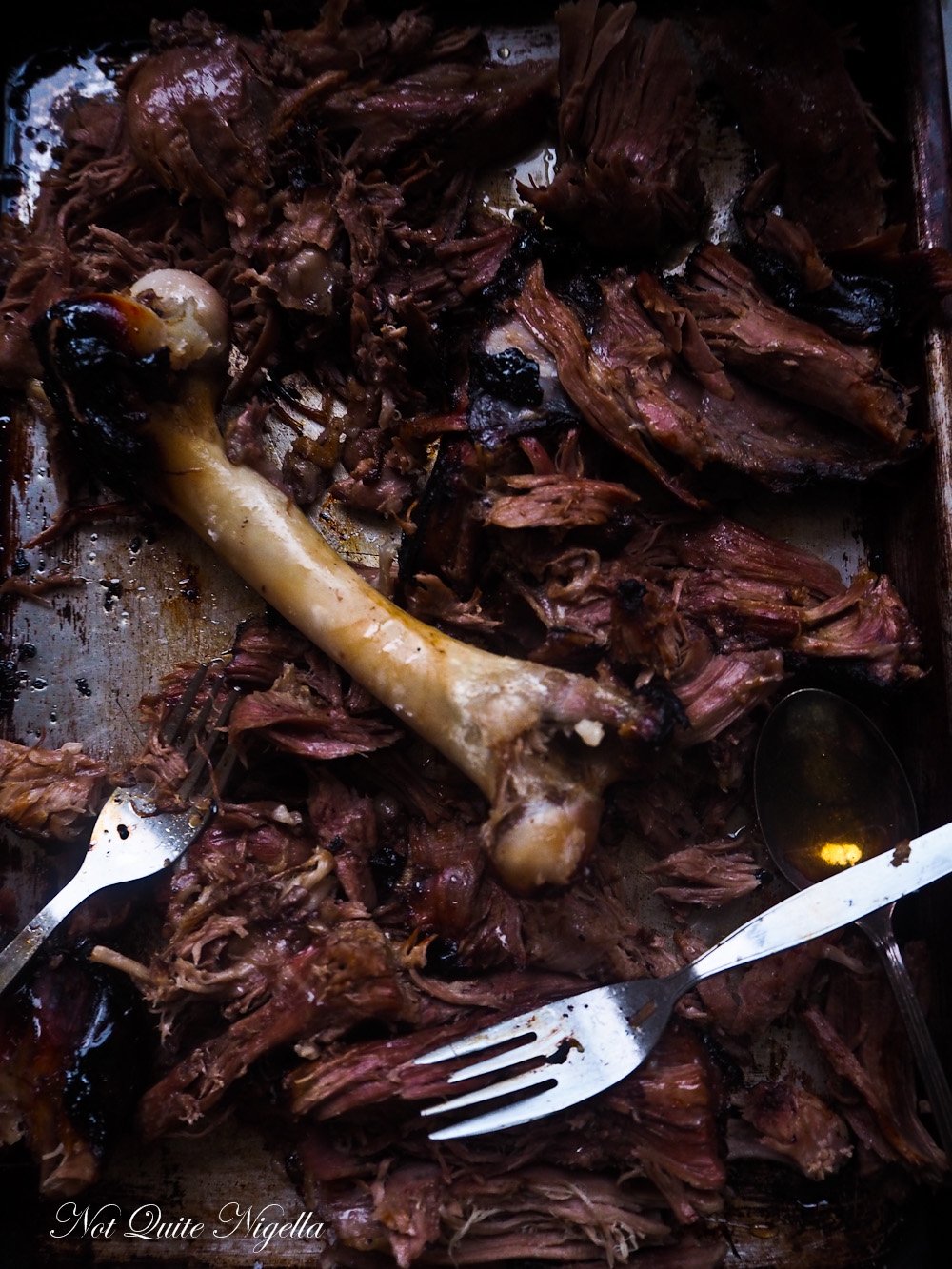 Step 2 - Using forks, shred the meat (you can reserve the bone to put in a soup along with extra vegetables and barley) and put aside. I did this the day before. 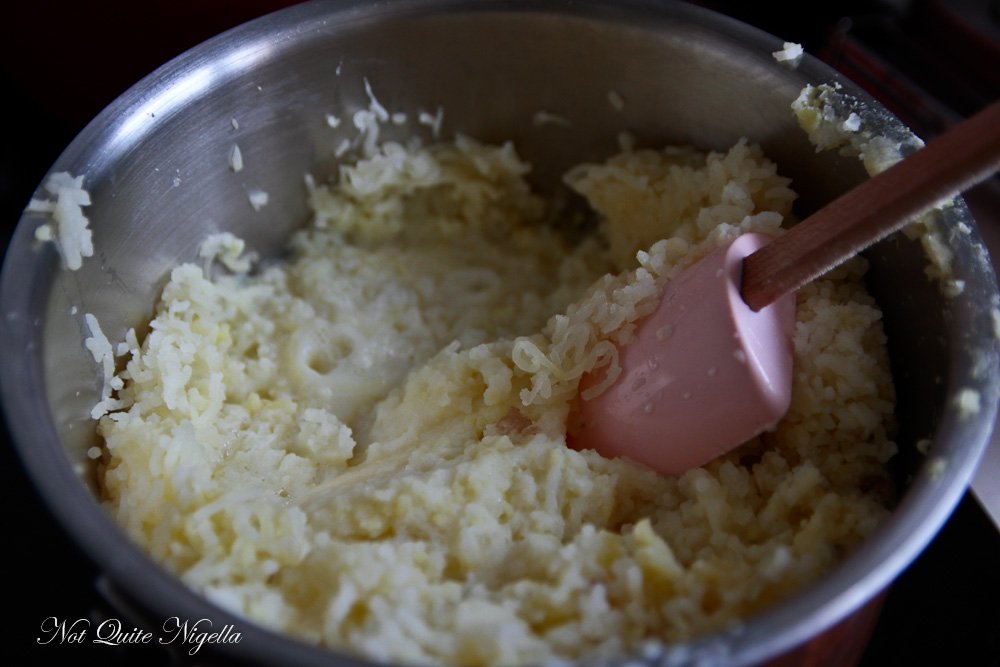 Step 3 - Boil the potatoes in their skins until soft. Pass them through a potato ricer and back into the saucepan. Add the hot milk in a thin stream and then add the feta, olive oil and salt and taste for seasoning (I find potatoes need a lot of salt). Set aside. 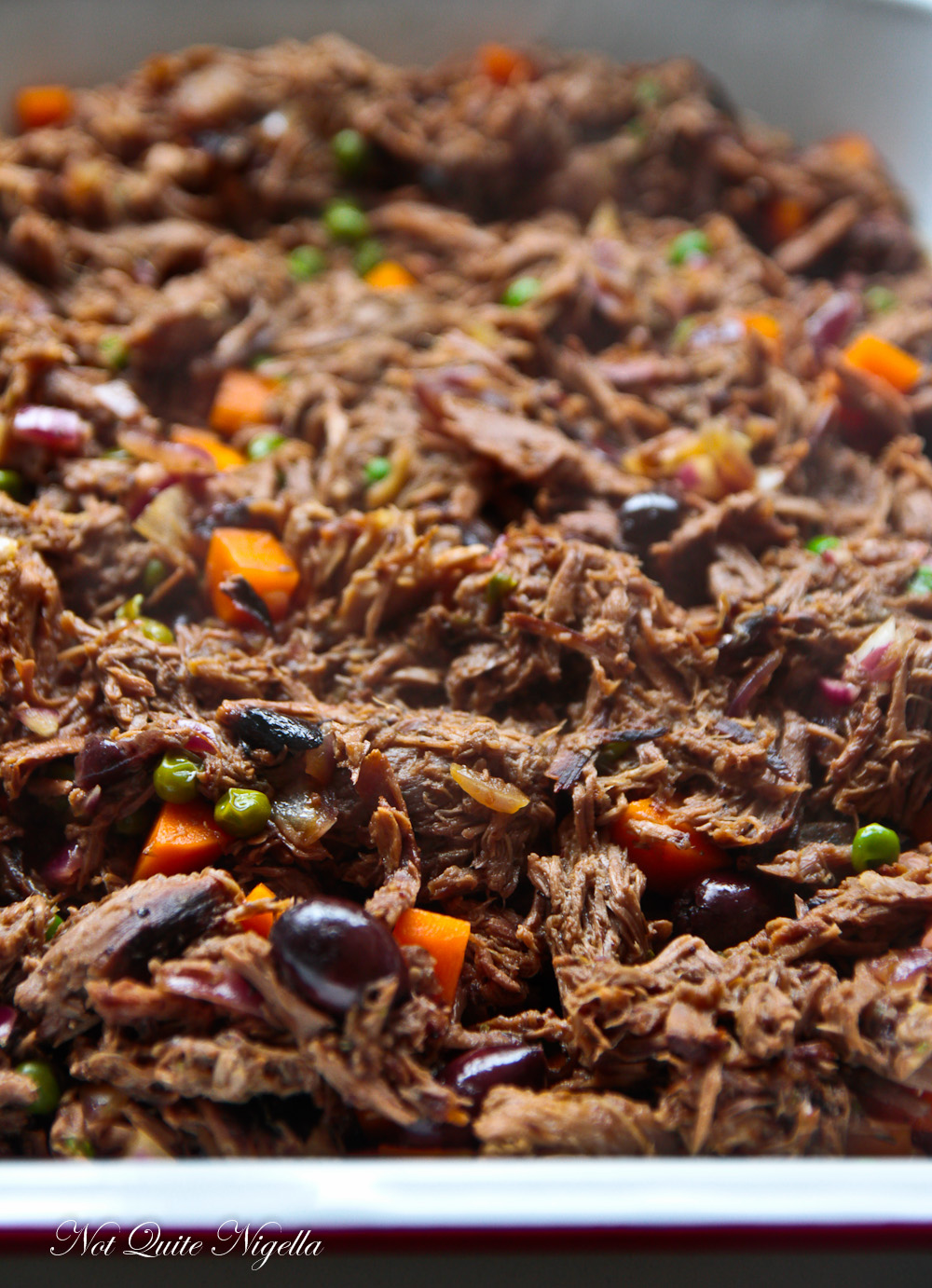 Step 4 - Preheat oven to 180C/350F. Heat some oil in a frypan and saute the onion and carrots. Add the lamb and the stock. If you are using mince, add it in two lots now browning it well before adding the stock. When the lamb is cooked through and softened, add the peas, honey, lemon, black olives and oregano. Taste for seasoning, you want a wonderful balance between salty, lemony and sweet. 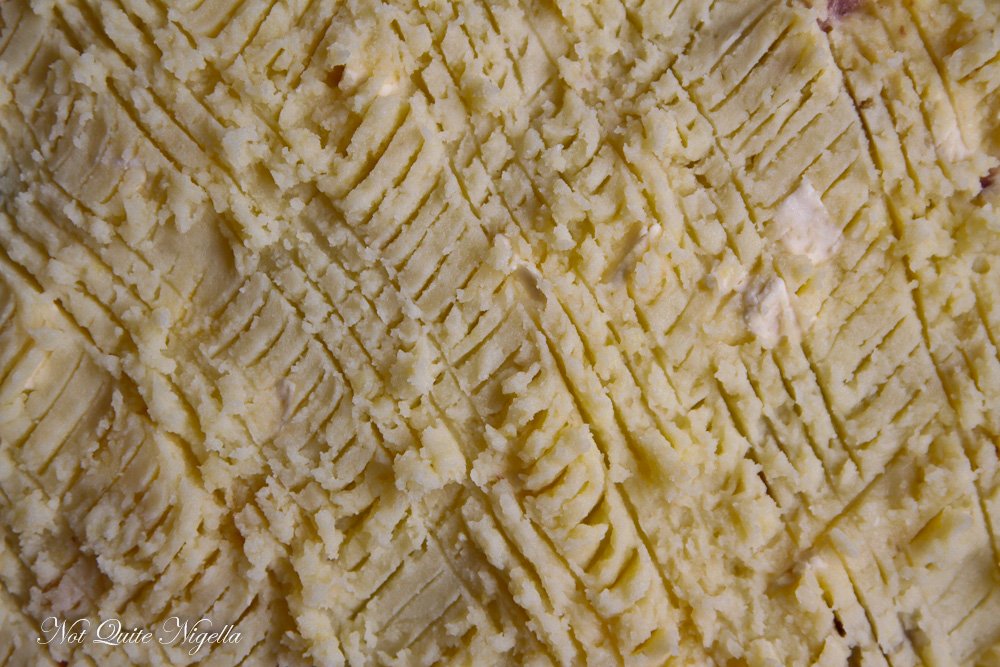 Step 5 - Place the lamb mixture into a baking dish and then top with the mashed potato. Make marks or patterns with a fork if you want to. Drizzle with some extra olive oil on top and bake for 30 minutes.