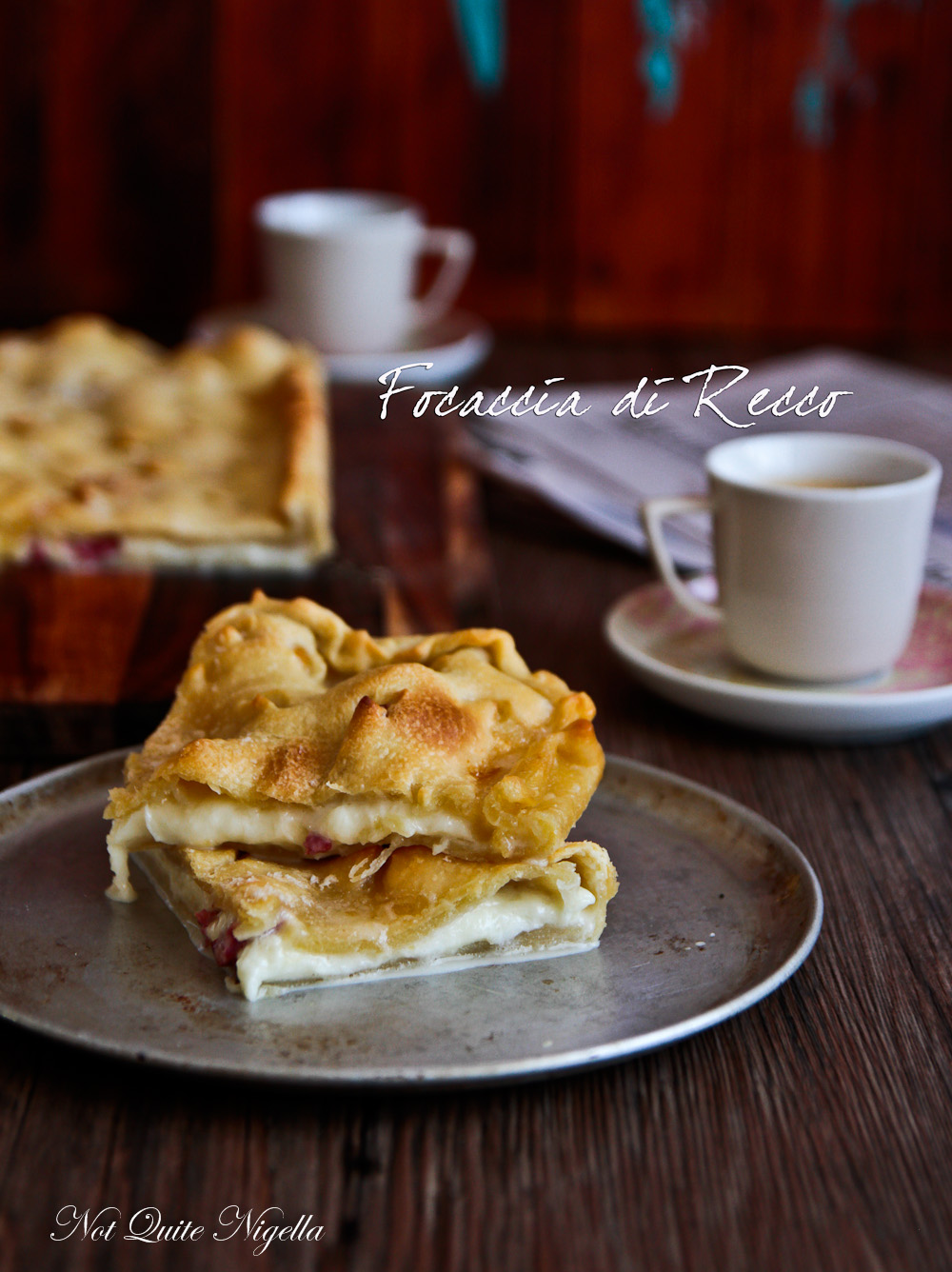 An absolutely gorgeous version of focaccia bread, this is nothing like the thick, airy, spongy focaccia you may have tried. Focaccia di Recco from the town of Recco has a thin top and bottom layer of pastry and is filled with melting stracchino or crescenza cheese. If you enjoy breads and bread making (or eating!) this unique bread is well worth a try!

From time to time I'm fortunate enough to be gifted delicious things to try. A few weeks ago, I was given a goat ham from The Gourmet Goat Lady. Jan farms boer goats on her property in Gilgandra in Central Western NSW. This all came about after I had mentioned her while reviewing Shayan Quarter at the Shangri-la Hotel. One of the hotel's head chefs Bo Ip Sorensen contacted me saying that she had given him a goat ham to pass onto me and that he would glaze it up for me.

So one night, we happily took delivery of this goat leg ham. It was enormous and smelled wonderful. It was brined for 48 hours, smoked for 2 and then cooked for 4 hours. Bo had glazed it using honey from the hotel's rooftop hives mixed with mead. I cut off a piece from the bottom and it was luscious. Unlike goat's milk and goat's cheese, goat meat is actually very mild in flavour and doesn't taste "gamey". But given that it is just the two of us in this house, we thought that we'd invite The Wizard over for dinner to drink scotch, cider and eat goat ham.

I heated the goat up according to Bo's instructions. I placed it down on the table and proceeded to look a bit lost. 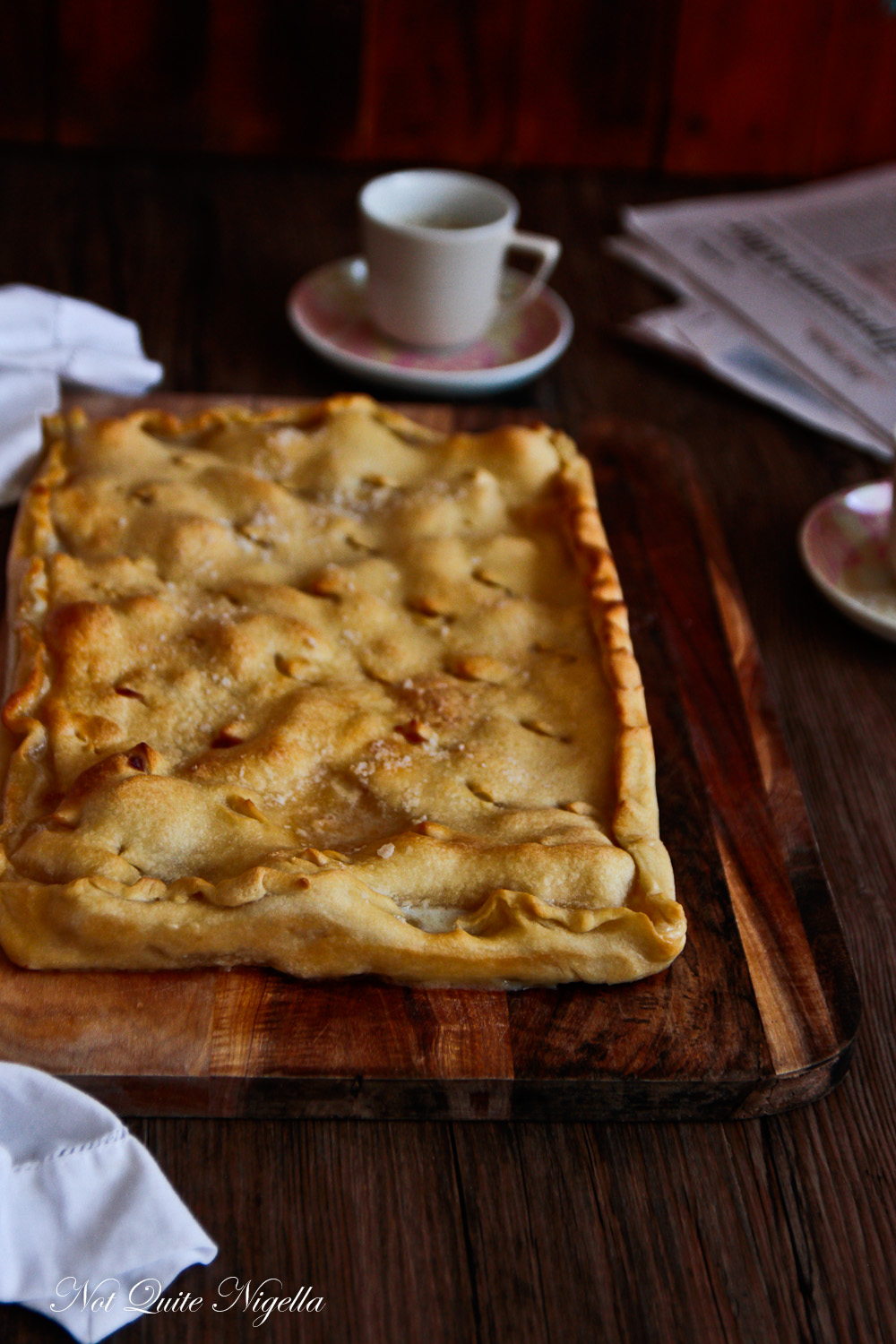 "Ummm does anyone know how to carve a leg of goat ham?" I asked looking at it. It's longer than a leg of lamb and while I've carved plenty of chicken and turkey, a leg of goat was new to me.

"I come from Chinese people. We don't serve roasts like this," I answered, thinking back to how we serve meats cleavered up into pieces.

"Well I come from vegetarian people," added Mr NQN. I don't imagine there were many tofurkeys bandied about in the Elliott household.

"Well I'll give it a go!" said The Wizard who did a pretty good job of it.

I faced the same carving question recently although this time, it wasn't meat. It was a Focaccia di Recco, from the town of Recco in Liguria, Italy. It was actually a Daring Baker's Challenge this month but I ran out of time to complete it by the due date. It's a simple recipe made up of the simplest ingredients that are easily found in Liguria - bread flour, honey, olive oil, fresh cheese and salt. Focaccia de Recco has PGI or Protected Geographical Indication, the designation of origin and geographical indication. 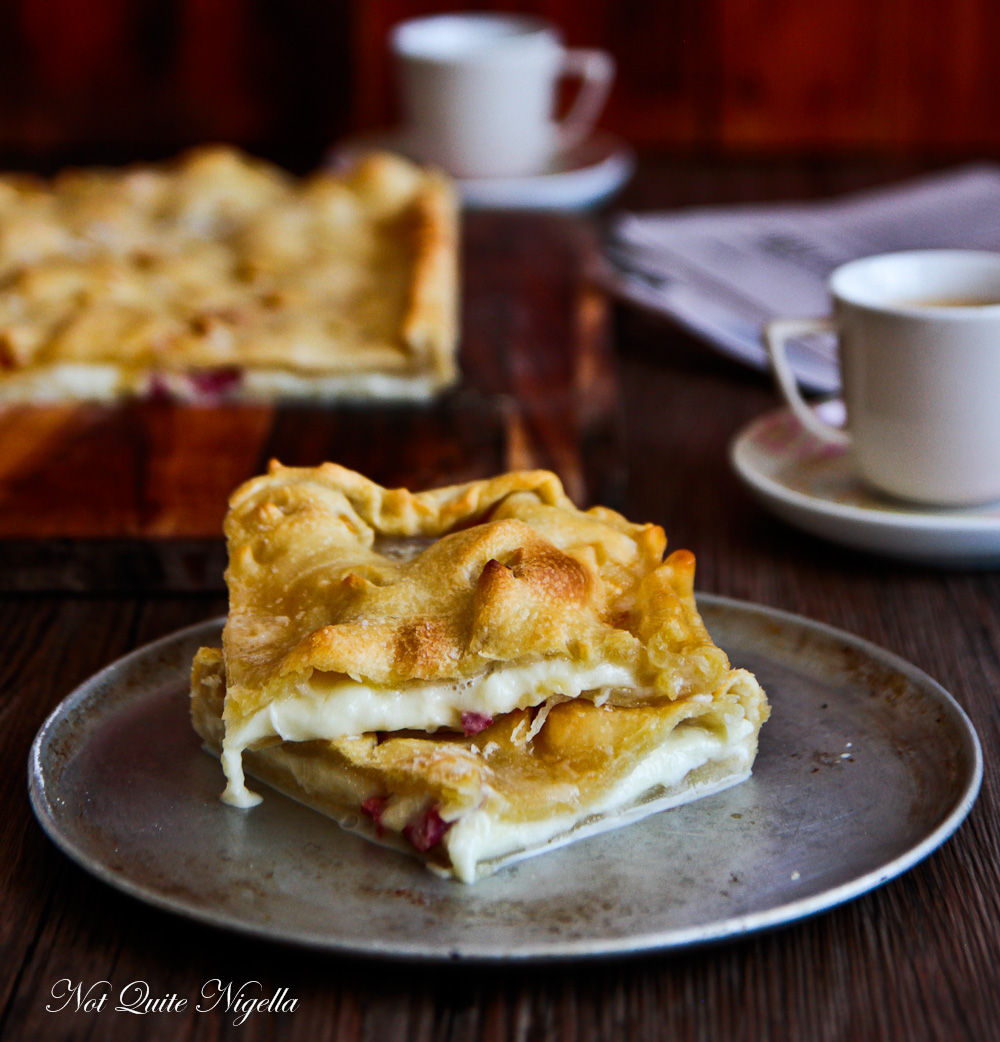 This focaccia is really nothing like the other fluffy, thick and airy focaccias you may have tried. What attracted me to this was the paper thin dough and the filling with plenty of melted stracchino or crescenza cheese, a cow's milk cheese that melts and stretches. Its flavour is not unlike halloumi although it is more malleable. These is also no yeast in this which means that the resting time is just to make the soft dough easier to handle and roll out.

If you love cheese as much as I do, Dear Reader, then this is one of those pushy recipes. The biggest difficulty is to get a hold of stracchino cheese. I found it at Norton Street Grocers at $16 for a wheel. You can also use mozzarella but will need to adjust salt quantities as the stracchino I used (by brand La Vera) was saltier. But whatever you do, give this a go. It's a marvellous take on a filled flat bread and when it emerged from the oven the cheese has bubbled its way through the cuts in the top. I cut it into squares where cheese dribbled and melted all over me. Did I care? No. Because I come from eager to eat people you see ;)

So tell me Dear Reader, what sort of "people" do you come from? And do you know your way around carving a roast? What's your favourite meat to roast? 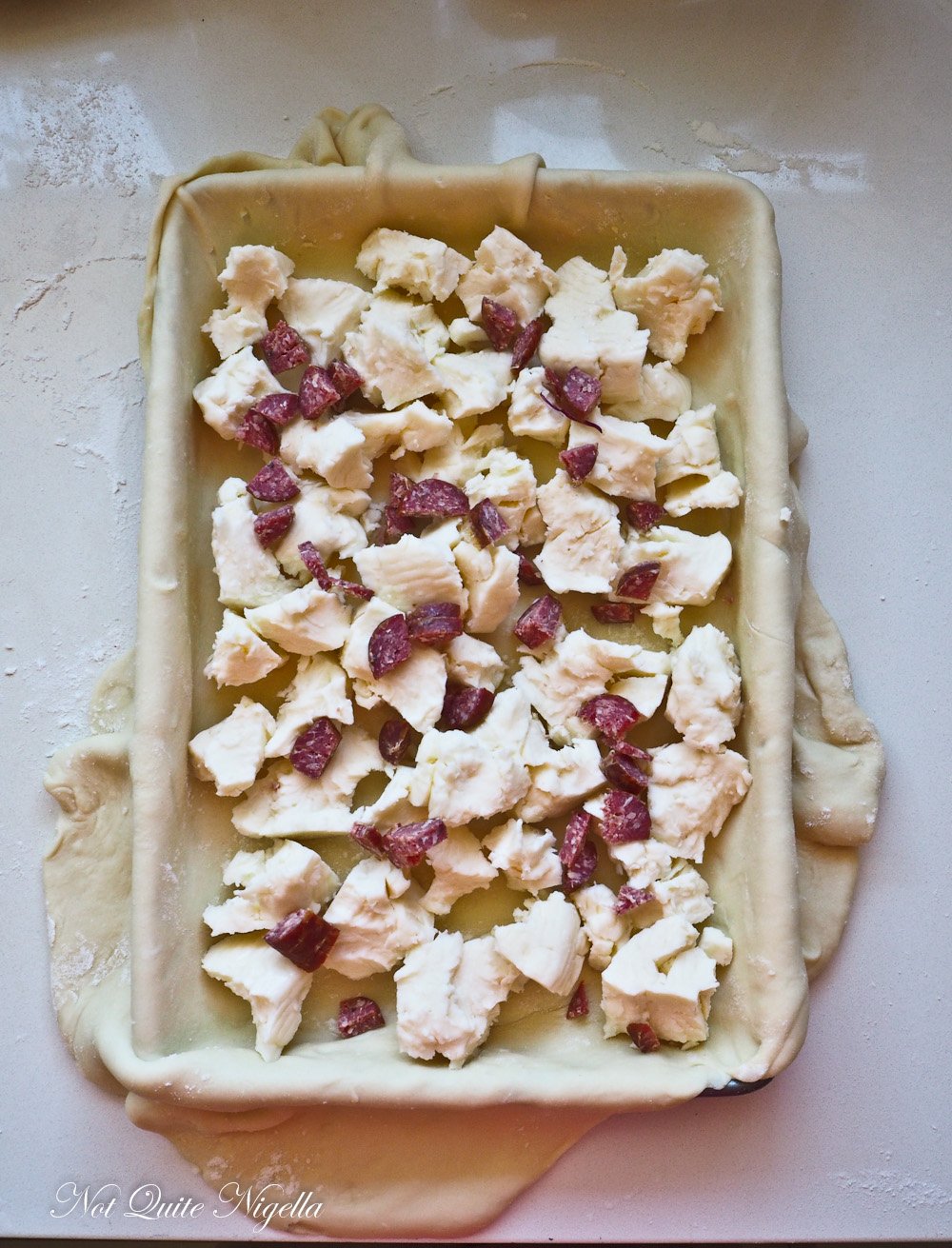 *Step 1 - *Mix the flour and salt together and make a well in the centre. Whisk the oil, water and honey and add to the flour mix and knead with an electric mixer or by hand until elastic. It takes about 6-8 minutes in a mixer, and around 8-10 minutes by hand. Divide dough in half and cover with cling film and rest for 1 hour. 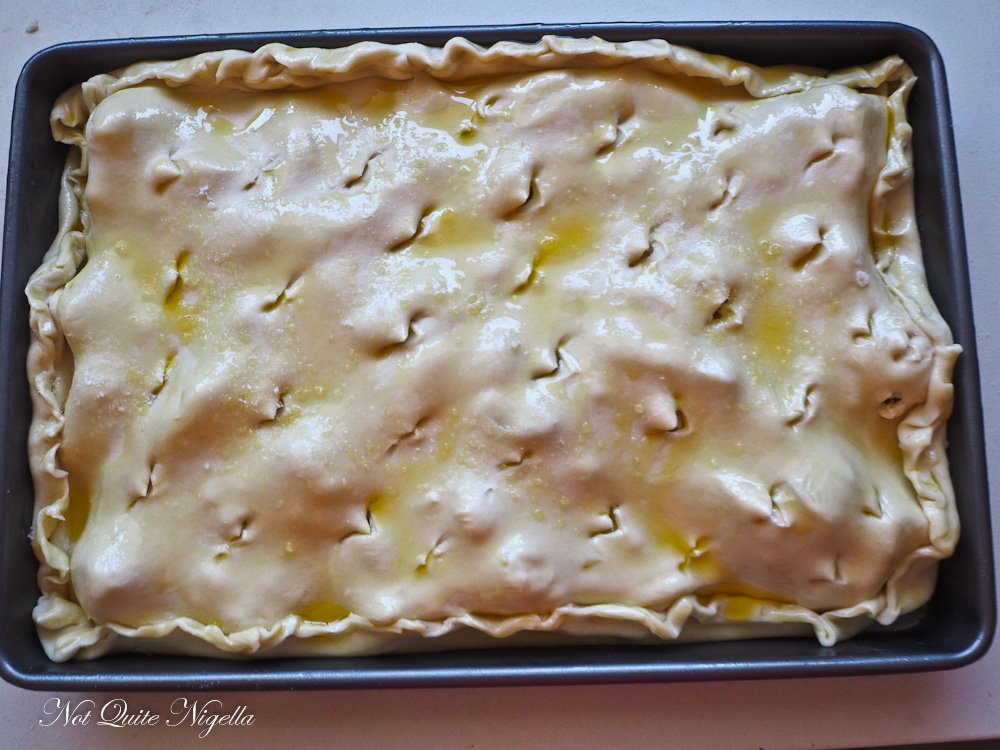 *Step 2 - *Preheat oven to 250C/482F. Lightly flour a 30x40cms (12x16inch) baking tray and roll out one half of the dough as thinly as possible. Place into the baking tray. Tear pieces of the cheese and sprinkle over along with the sausage. Roll out the other half of the dough and place on top. Don't worry about the lumpy surface. Trim off excess (you can rest it for 45 minutes and reroll it into a smaller bun but make sure to rest it or it will be tough) and then crimp the edges. Using a pair of scissors, snip little holes in the top of the focaccia. Brush with extra oil and add a little extra salt. Bake for 15 minutes or until cheese bubbles through the top and the crust is a light golden shade.