Made From Scratch: Baba Ghanoush and Pita Bread! 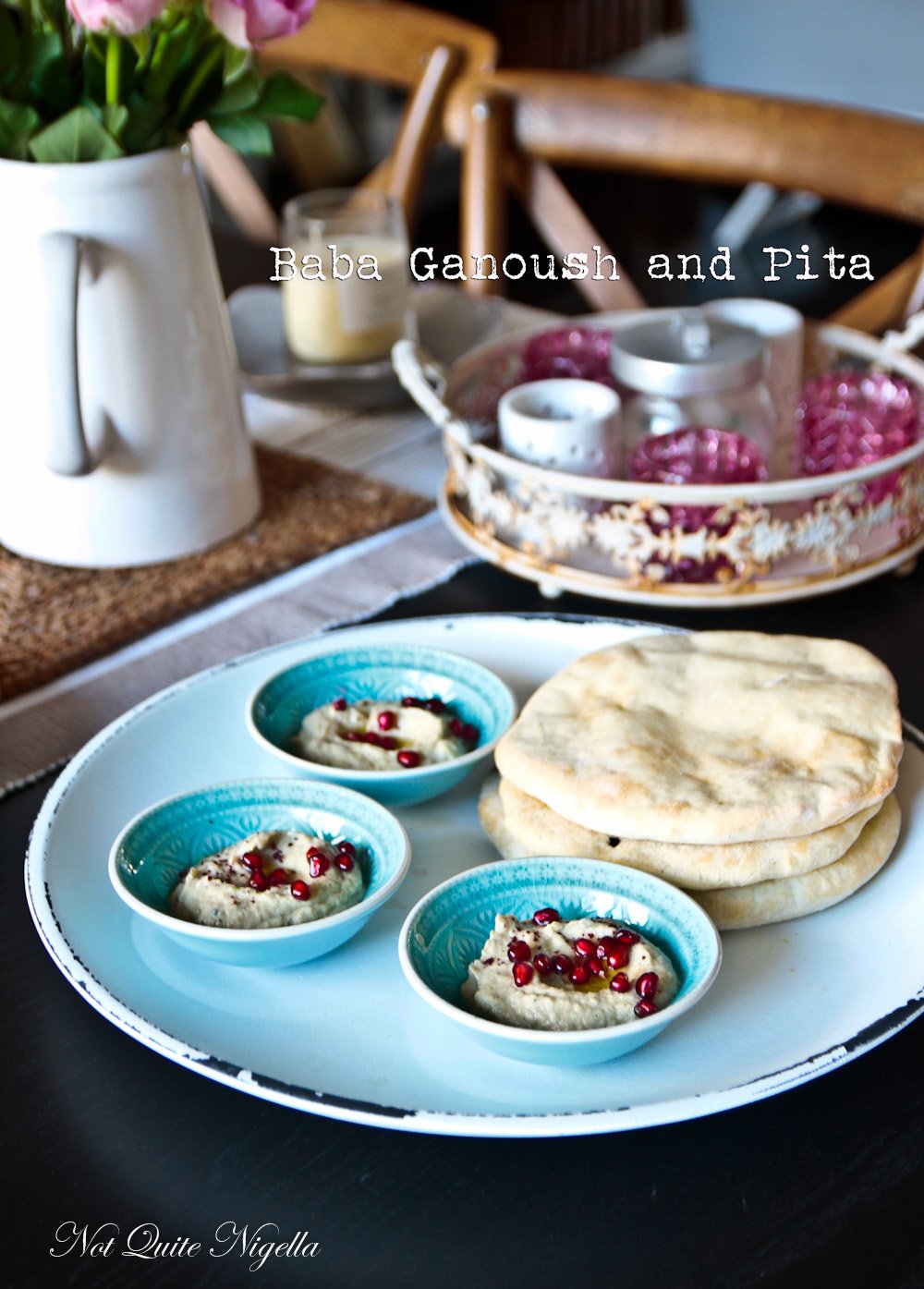 Ever made baba ghannoush and pita bread from scratch? With these two recipes, your baba ghannoush will taste just like the one at your favourite restaurant and the pita will be one of the best, softest and freshest pita bread you will ever try!

This recipe was brought to you by Natural Gas

Usually on a weeknight, if I am not at a restaurant, I'm usually crouched over my computer monitor working. One night, an email popped into my inbox that took me aback a little. It read:

My girlfriend is a big fan of your blogging and reviews. I am hoping to propose to her and to do so, I was hoping to publish a custom made newspaper. In the newspaper, I was hoping if it were possible to use one of your reviews/blog entries? To be even more of a nuisance, I am wondering if you have one that is unpublished? Would I be able to use that?

I do understand if this is not at all possible. I thought I'd check before doing anything. I thank you for your time and consideration.

I stopped what I was doing (developing a recipe) and re-read it. You see I absolutely love weddings because they're such happy times and being invited into this couple's world no matter how tenuously was nothing but an honour to me. I asked Karnik some details and sent him through an exclusive unpublished review and wished him good luck (I'm sure a guy that goes to all that trouble for a proposal doesn't need any luck) and then resumed my recipe development, a smile playing on my face. 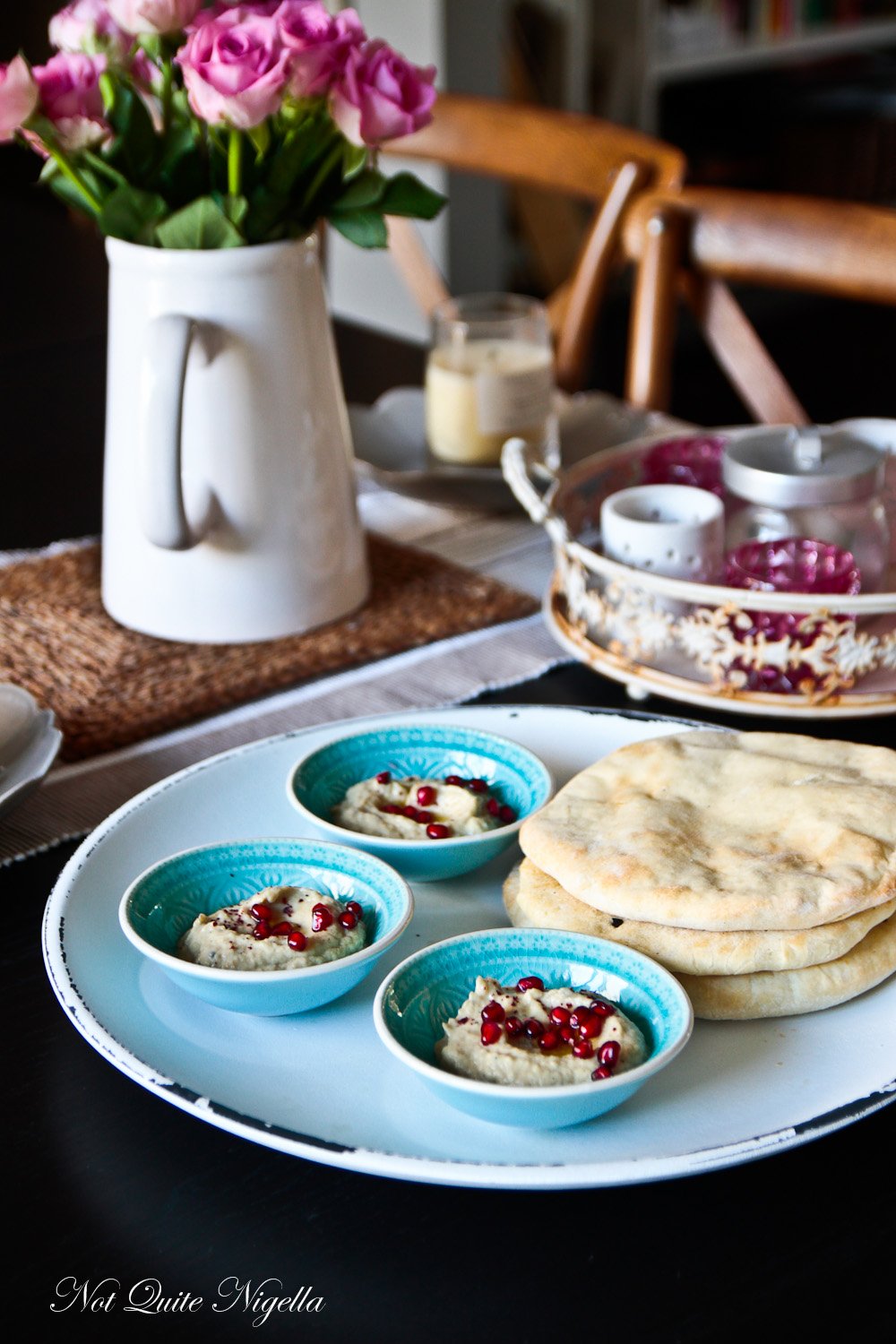 The recipe that I was developing was this baba ghanoush. It's one that I have wanted to make for the longest time but I knew that to get that incredible, really smokey delicious flavour of baba ghanoush, you need a gas stovetop. The only problem is our whole apartment block doesn't have gas - I checked when we first moved in because I wanted it. I know people swear by their gas stovetop for fast cooking and responsiveness and when I've cooked with gas I've really noticed the difference. There are no peak or off peak tariffs and because it heats up so quickly and instantly, you don't need to use it for as long. Natural gas also produces lower greenhouse gas emissions than other energy options.

A lovely friend Angie offered to loan me her gas stovetop to make this recipe because I really wanted to see if I could reproduce a restaurant quality baba ghanoush. She and I turned the gas on to a full flame and I positioned two eggplants straight on the open flame. I had seen this done at a cooking class years ago and I was warned that if you think that the eggplant is done, it isn't. It's only done when it's a collapsing mass of carbon! The outside is totally obliterated but inside, the eggplant is beautifully smokey and creamy which gives it that distinctive taste. I scooped out the eggplant flesh and blended it with oil, garlic, lemon juice and a smidge of tahini. When Angie and I tried it, we both looked at each other. "It's just like at a restaurant!" she said, which was music to my ears.

I paired this with a pita bread, made from scratch which was placed in the oven while the eggplant was cooking. I adapted the recipe on my adopted mum's blog Barbara Bakes. I had wanted to make it for the longest time but I was quite honestly a bit intimidated by it. I was so impressed by this gorgeous pita bread that I've made it several times since. The stuff that you buy in the shops is a few days old and nothing compares to this fresh baked pita. It reminded me of pita that I had in the Middle East as it was so soft and fresh. I'm being pushy again here but please do try and make this if you love soft, fresh bread and dip!

A few days ago I received an email from a girl called Mimansa. The name didn't ring a bell as Karnik hadn't mentioned his girlfriend's name but once I started reading the email, it brought a smile to my face again. 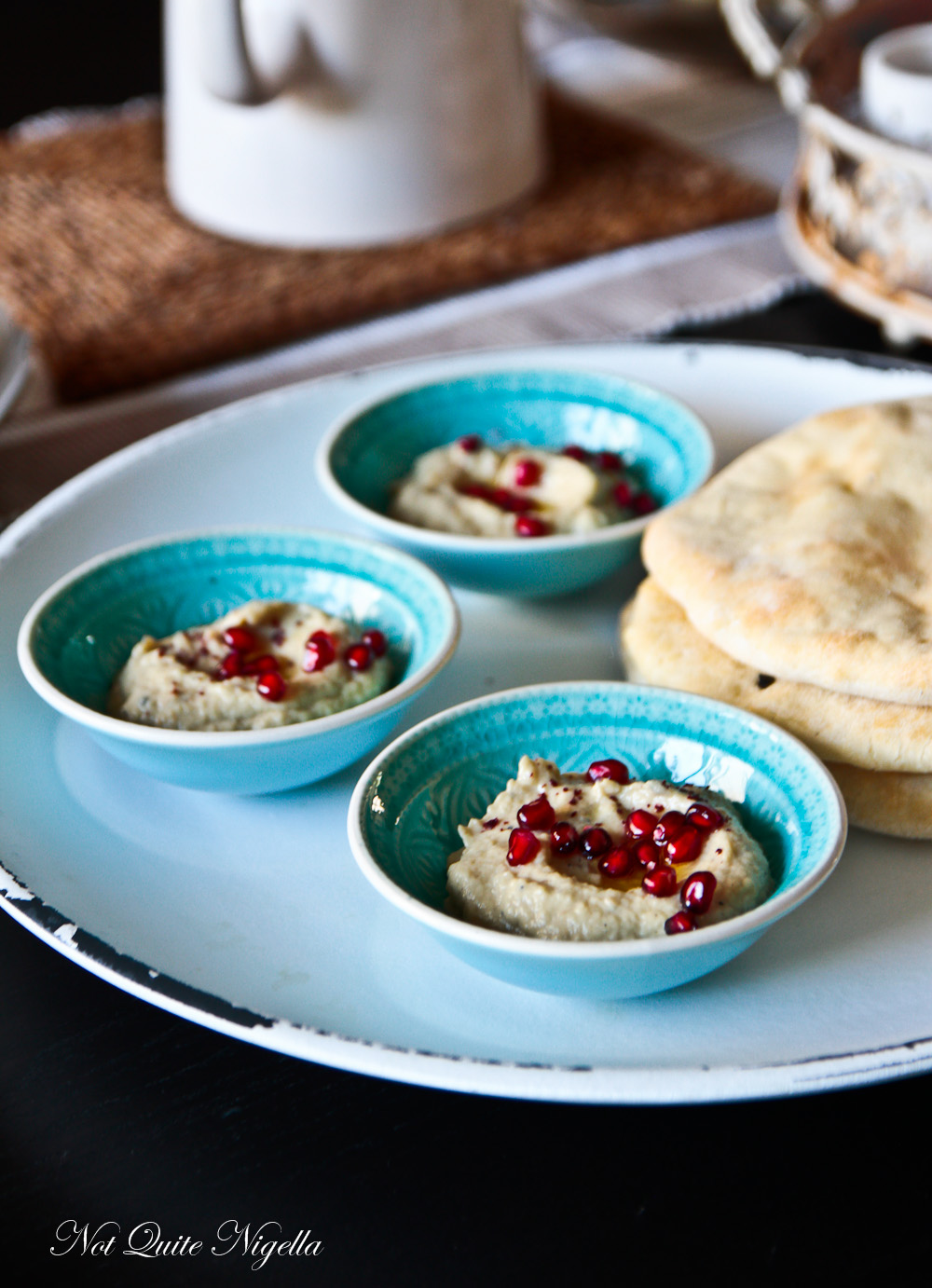 My name is Mimansa and I am a big fan of your blog. Reading your daily posts during breakfast has been a part of my daily morning ritual for a couple of years! I often visit restaurants you recommend and like to try out your recipes.

Recently, I got engaged. It was all so wonderful. One of the most exciting aspects of the proposal was seeing a post (one that I cannot recall reading before) written by you published in the newspaper that was given to me before he got down on one knee and asked me to marry him!

I was bursting with excitement when I found out later that he had been in touch with you and gotten you to send him an unpublished story.

Thank you for being involved and making it that extra bit more special :-)

Karnik mentioned that you would like a copy of the paper. Would you be able to send me your postal address so we can post it to you?

Please keep up the great work on the blog, looking forward to reading about all your food adventures!

So tell me Dear Reader, how were you proposed to? And if you haven't been proposed to already, how do you want it to be? Grand or private? And what sort of stovetop do you have? Have you ever made baba ghannoush or pita from scratch before? 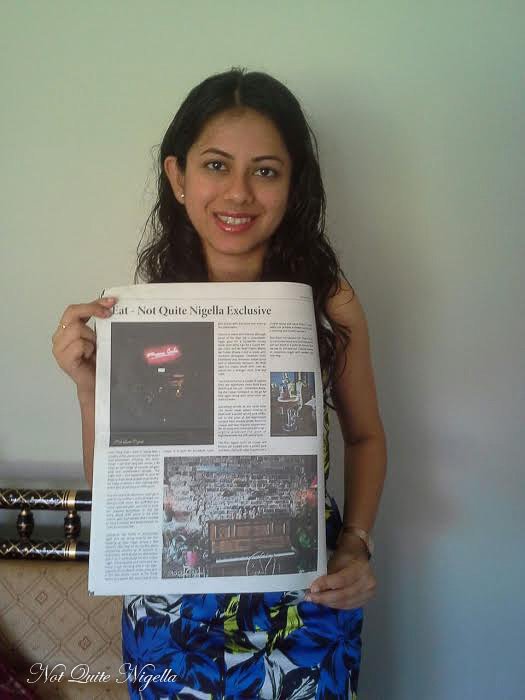 The lovely Mimansa with the newspaper from the proposal!

Tip: this recipe doesn't make a lot of baba ghannoush, considering how delicious it is. I'd actually recommend doubling this but I've left it at the smaller quantity in case you are a bit nervous about doing the eggplant on the open flame for the first time. I guarantee the second time you make it you'll probably double or triple the recipe it's that good! 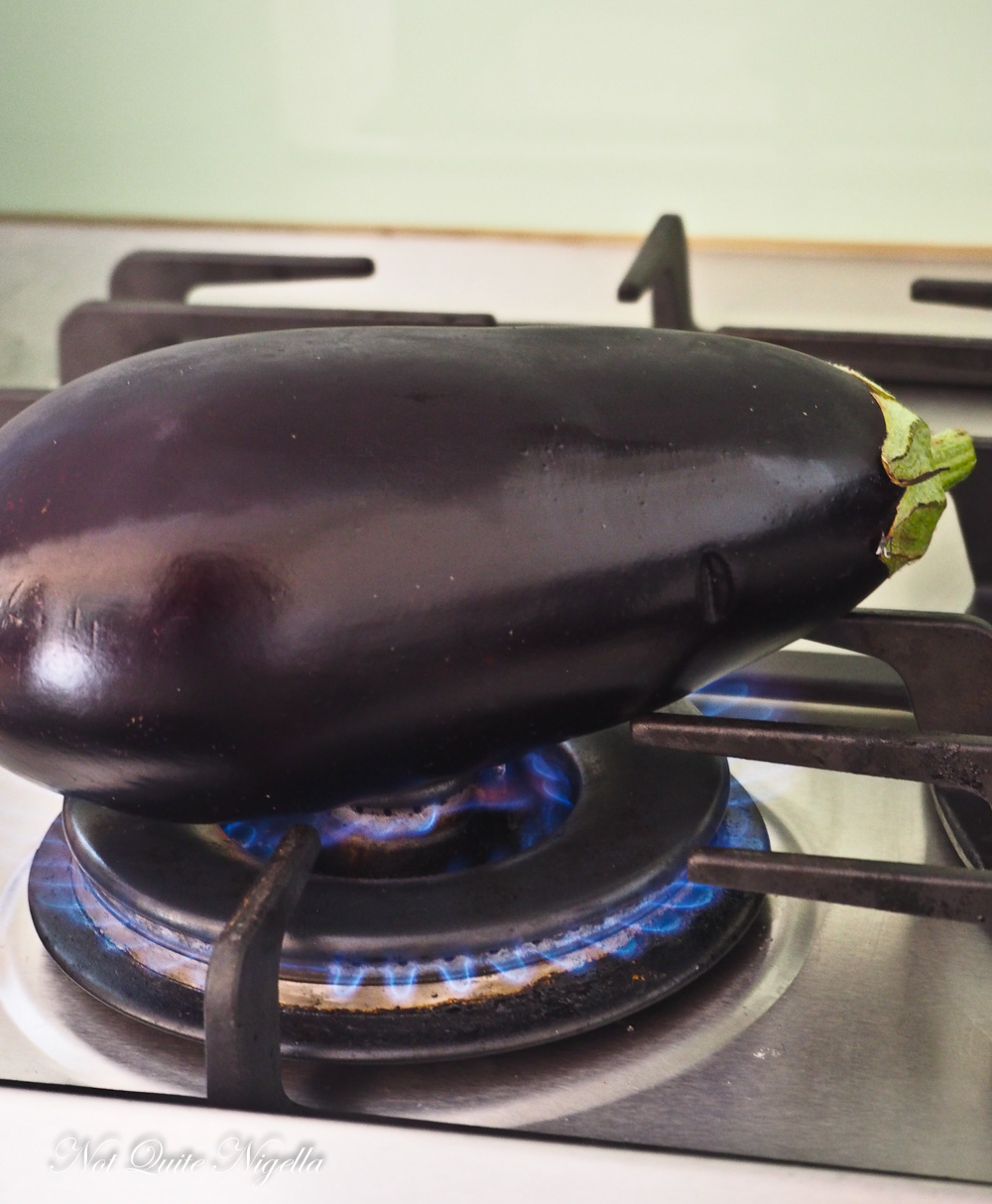 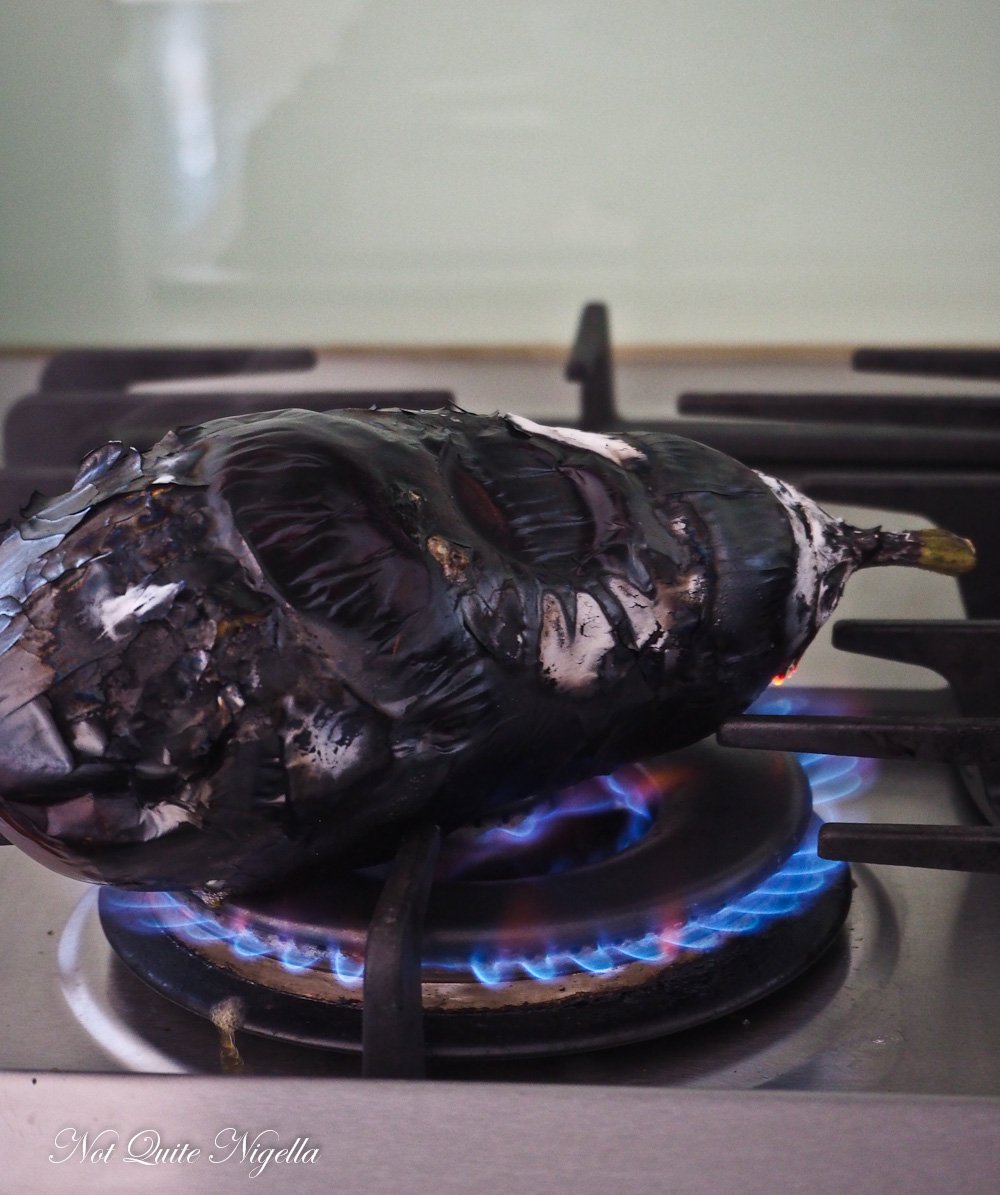 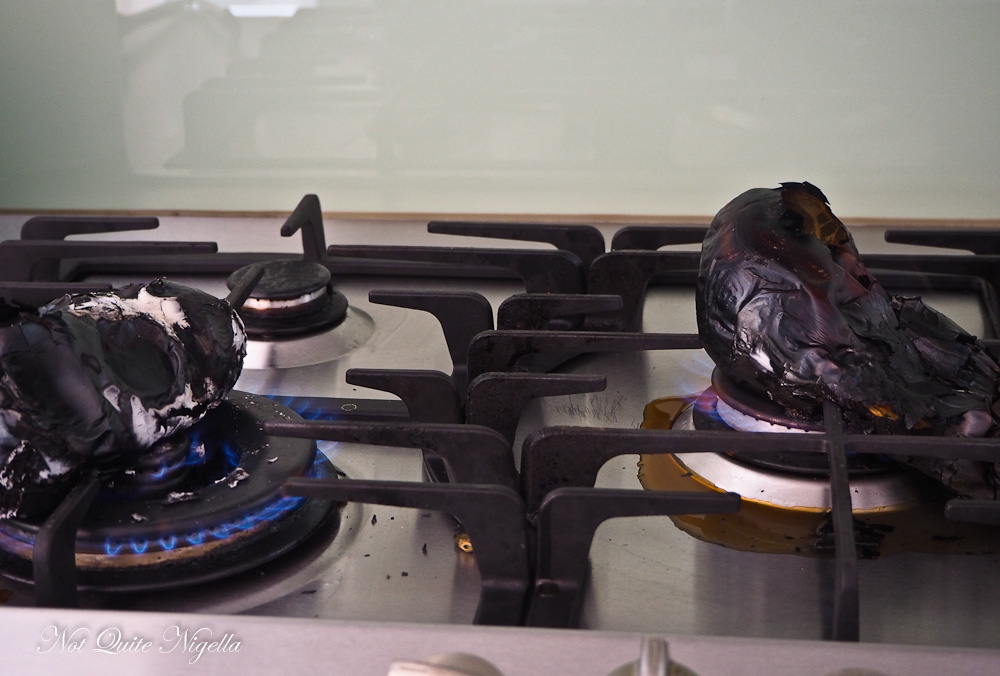 To a collapsing mass of carbon!

Step 1 - Place the eggplants directly on a gas flame on high. Allow it to become charred on the outside - this can take around 15 minutes and the outside will look totally black and charred. Turn with tongs and be patient and resist the urge to take it off earlier. This is how you get the distinctive smokey flavour. Take a peek inside and you can see the the inside is creamy and soft but not burnt so don't worry. Pinky swear ;) 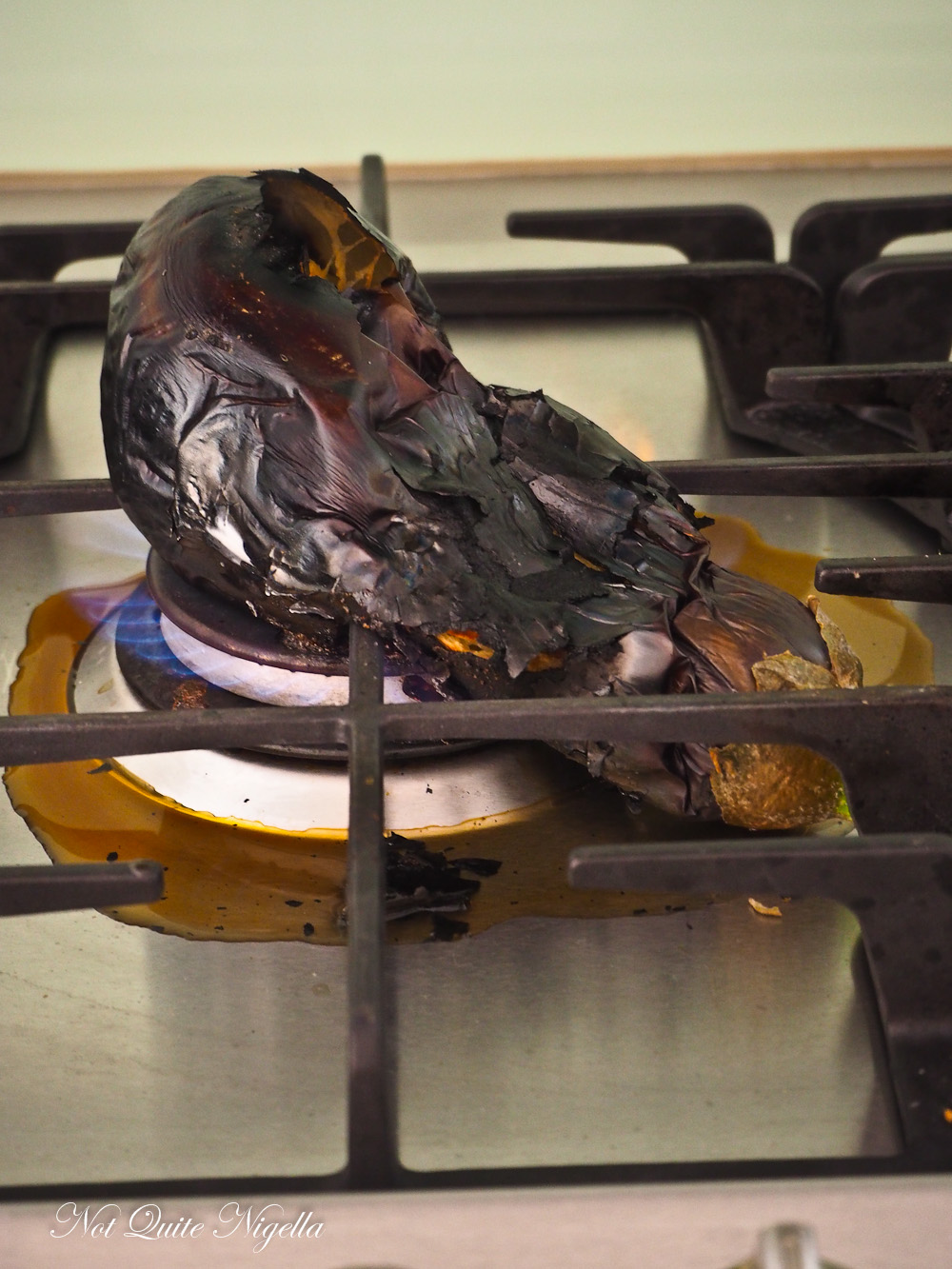 Step 2 - Remove the eggplant from the burner and allow to cool for 10-15 minutes. Meanwhile get the rest of the recipe ready. Peel the garlic cloves and place in a food processor. Add the lemon juice, oil and tahini. Remove the black charred skin from the eggplant and place the soft flesh in the food processor. Blend until smooth and silky. Add salt and taste. Add more lemon juice, oil or tahini if it needs it.

Step 3 - Serve in small individual bowls with a drizzle of oil, sumac and some pomegranate seeds. 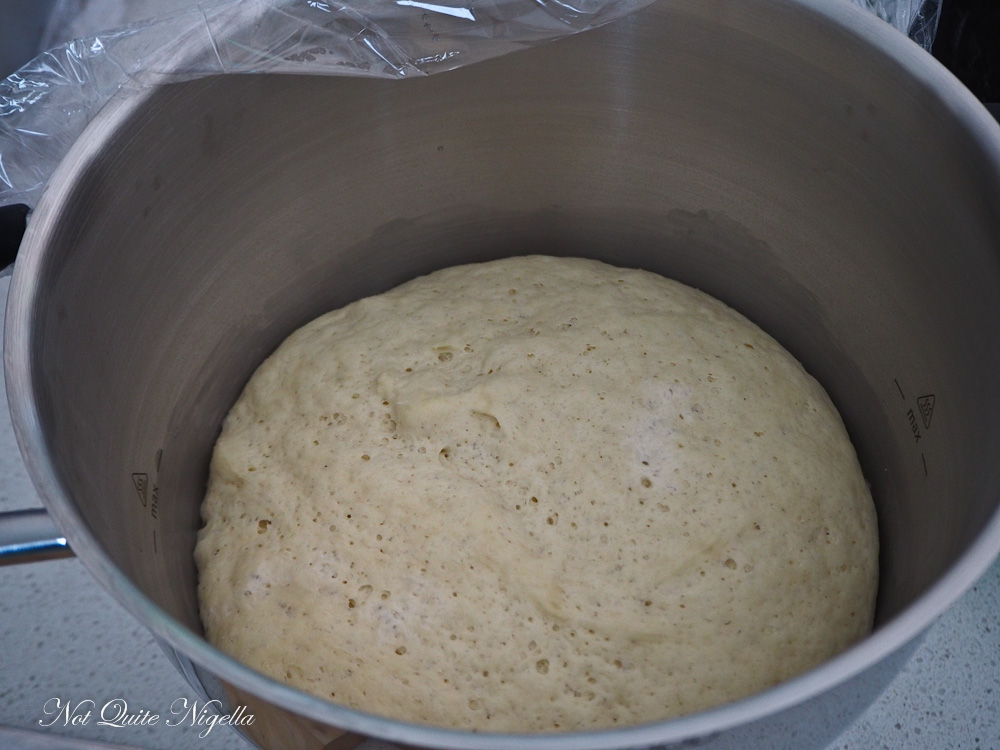 Step 1 - Mix the flour and yeast well together. Then using a dough hook or your hands add the water, oil and honey and knead together. When it has just combined add the salt and (you don't want the salt to come into direct contact with the yeast as it can inhibit yeast growth). Allow to rise for 1 hour in a warm area. 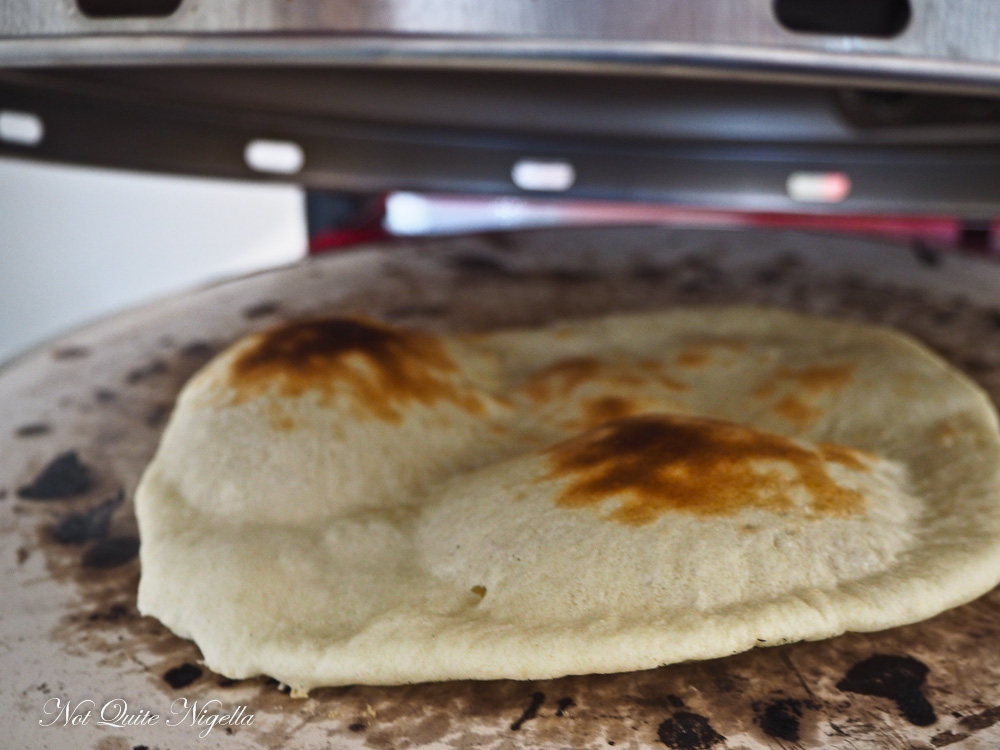 Step 2 - Preheat oven to 275C/527F or the hottest it will go. Have a pizza stone in the oven or an oven tray that is heating the entire time. For the pita to puff up the oven and the pizza stone or tray needs to be very hot. 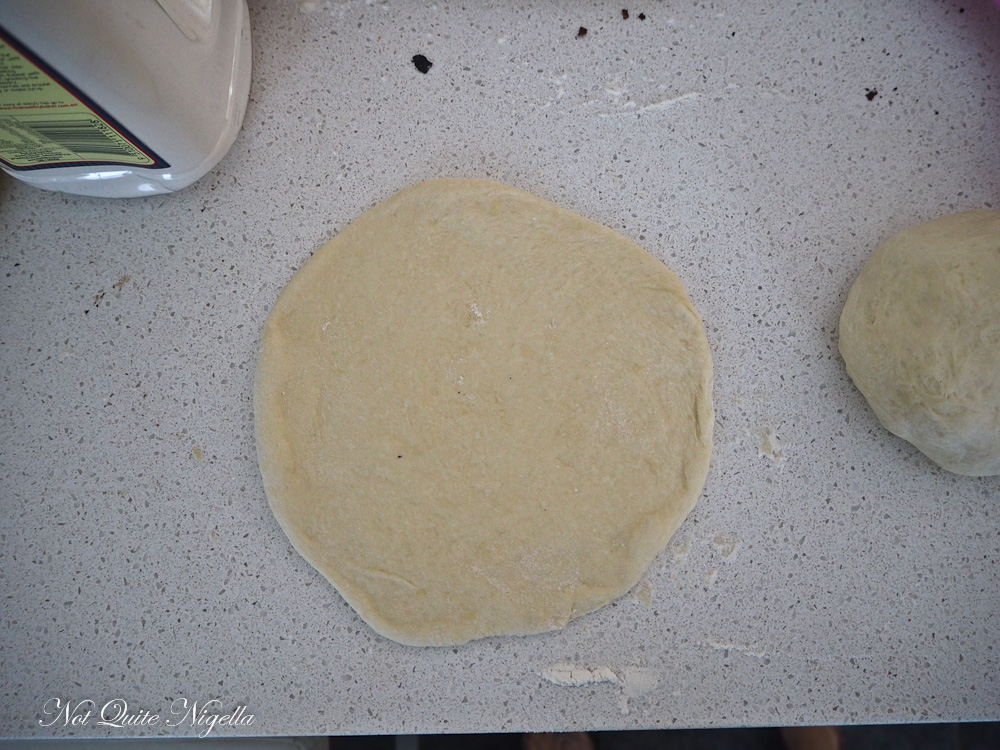 Step 3 - While the oven is preheating, divide the dough into six balls and place on a lightly floured surface and cover and allow to rest for 15 minutes. Then flour the surface again and roll out the balls into circles. Gently carry two round to the oven and bake each for 3-4 minutes until they puff up. Using tongs gently turn over and bake for another minute or two. 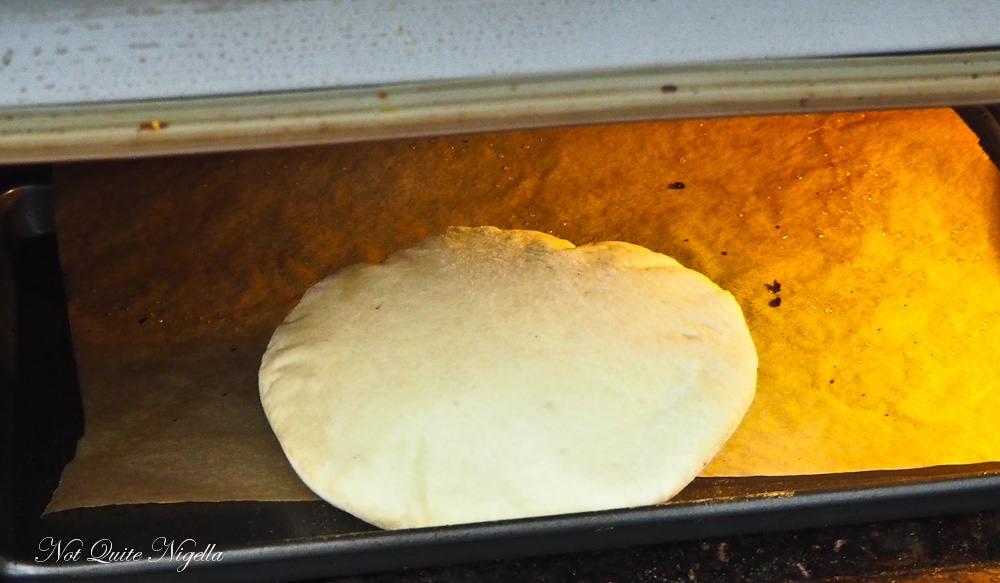 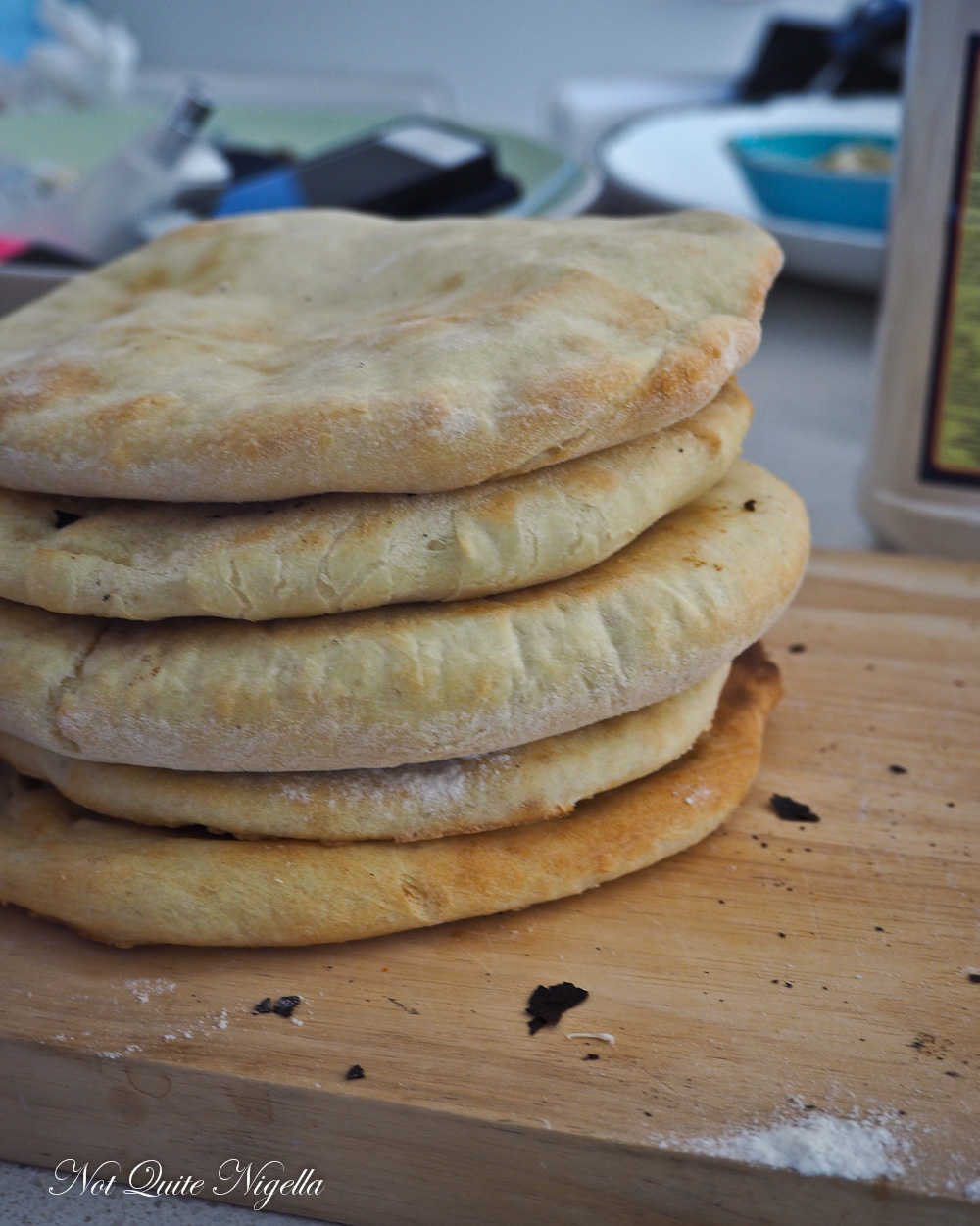