The Day I Made Haggis 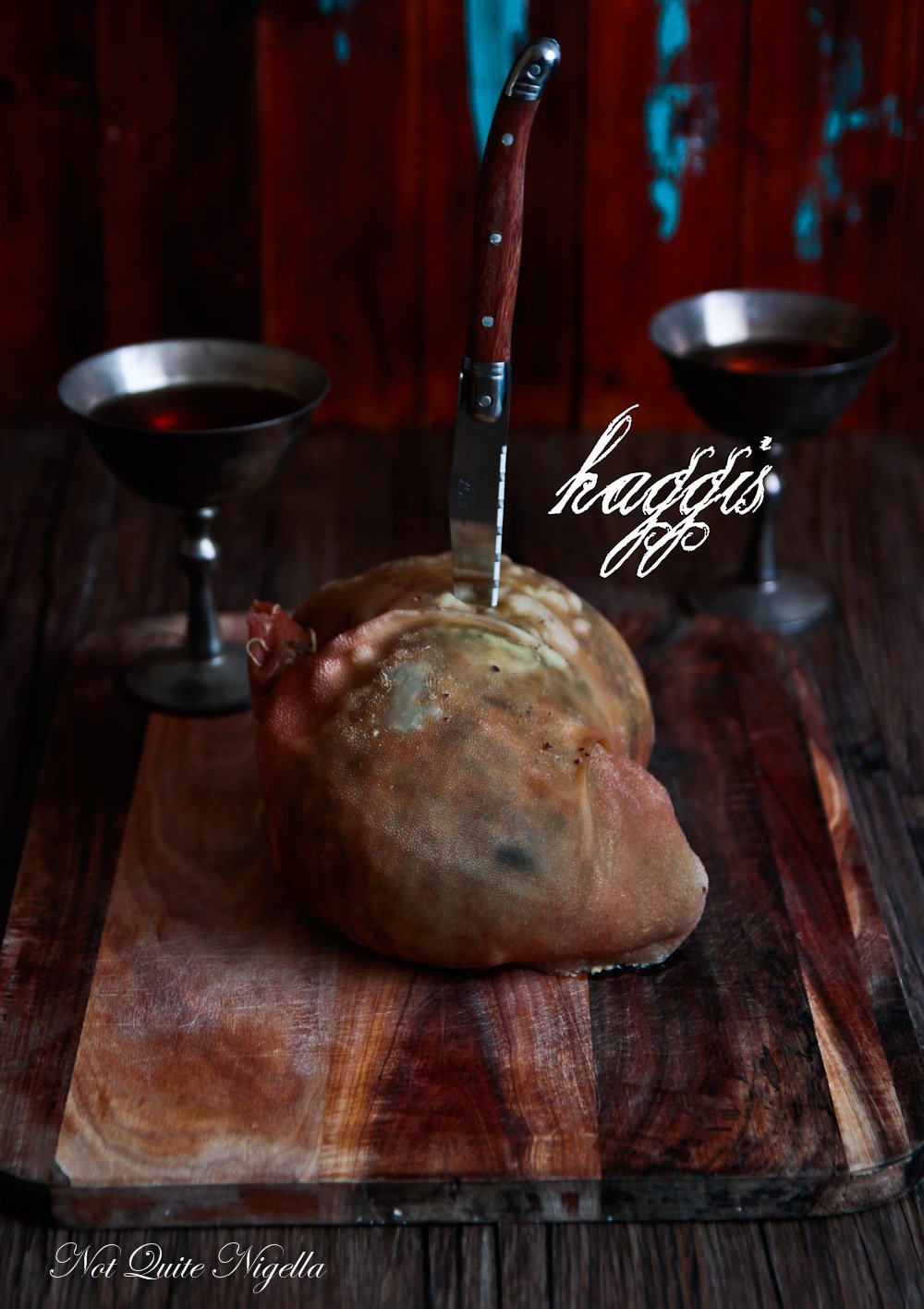 Ahh haggis. What more can I say about this oft maligned and under appreciated dish. It was only when I visited Scotland that I really got to appreciate how delicious it is. Making a haggis from scratch has been on my bucket list for a long time and it was during a recent Eurovision party that I decided to give it a go. So how was it? Read on Dear Reader...

Up until recently, I was a Eurovision virgin. I didn't know anything about this contest apart from what I saw from the news. From what I could ascertain, it was camp, it was funny and it was not necessarily about music. But when Danish Viggo and his wife Louise decided to throw a Eurovision breakfast where guests bring something from one of the countries competing, I got excited because it allowed me to make something that I had wanted to for the longest time. My bucket list item of making a haggis was coming closer to reality.

Can you hear the brakes screeching to a halt in the background? That's what it was like. "Soooo Haggis...I said to myself" sitting at my desk rolling my chair back and forth. Where would one begin? Mention the word Haggis and non-Scots tend to screw their face up and say, "Isn't it made out of the intestines boiled up?". For those of you that are familiar with the concept, yes it is all about offal. Allow me to explain. 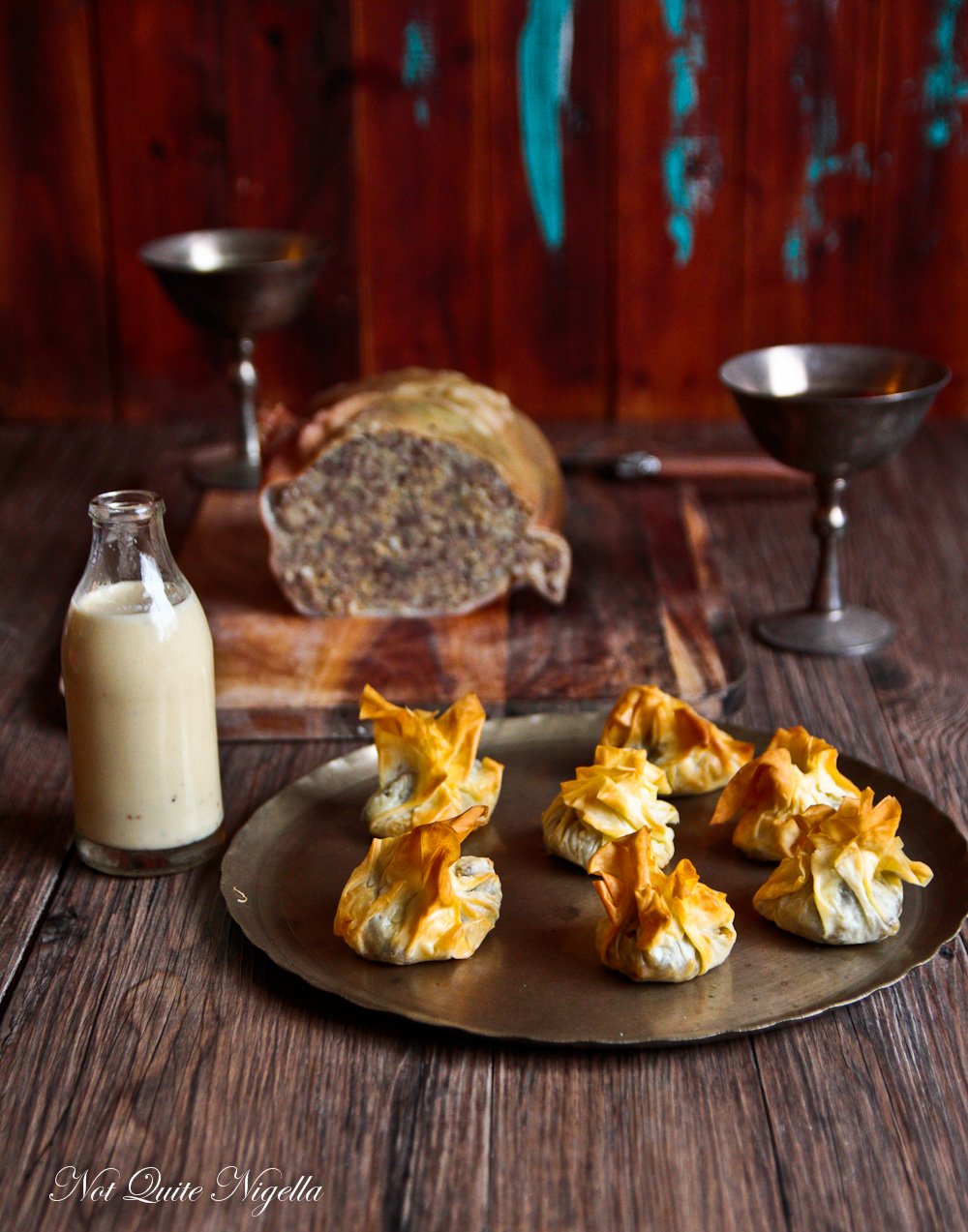 First you boil the heart, lungs, liver and lamb trimmings until soft. Oh god I can see everyone clicking away from this page right now. But I'll continue. Then you mince this along with toasted oatmeal, onions and spices and stuff the mixture into a sheep's stomach. The stomach serves as a poaching bag for the filling and you don't actually eat the stomach. It's commonly served at a Burn's Supper where a poet Robert Burns' "Ode to a Haggis" is recited. For us it wouldn't be a poem but rather eating it to the strains of Eurovision ballads while air guitars, over the top costumes and wailing singers prevailed.

I realise that haggis doesn't sound great. There are few people that will become excitable at the sound of it. But I actually love the stuff. This year I went to Scotland where I tried many a haggis or haggii (the plural of haggis). Unlike a lot of food, haggis has managed to change with the times and that's a rather good thing because it's not immediately appealing. You can get haggis burgers, haggis pakoras and haggis fudge (okay that's the spices and there's no meat involved). 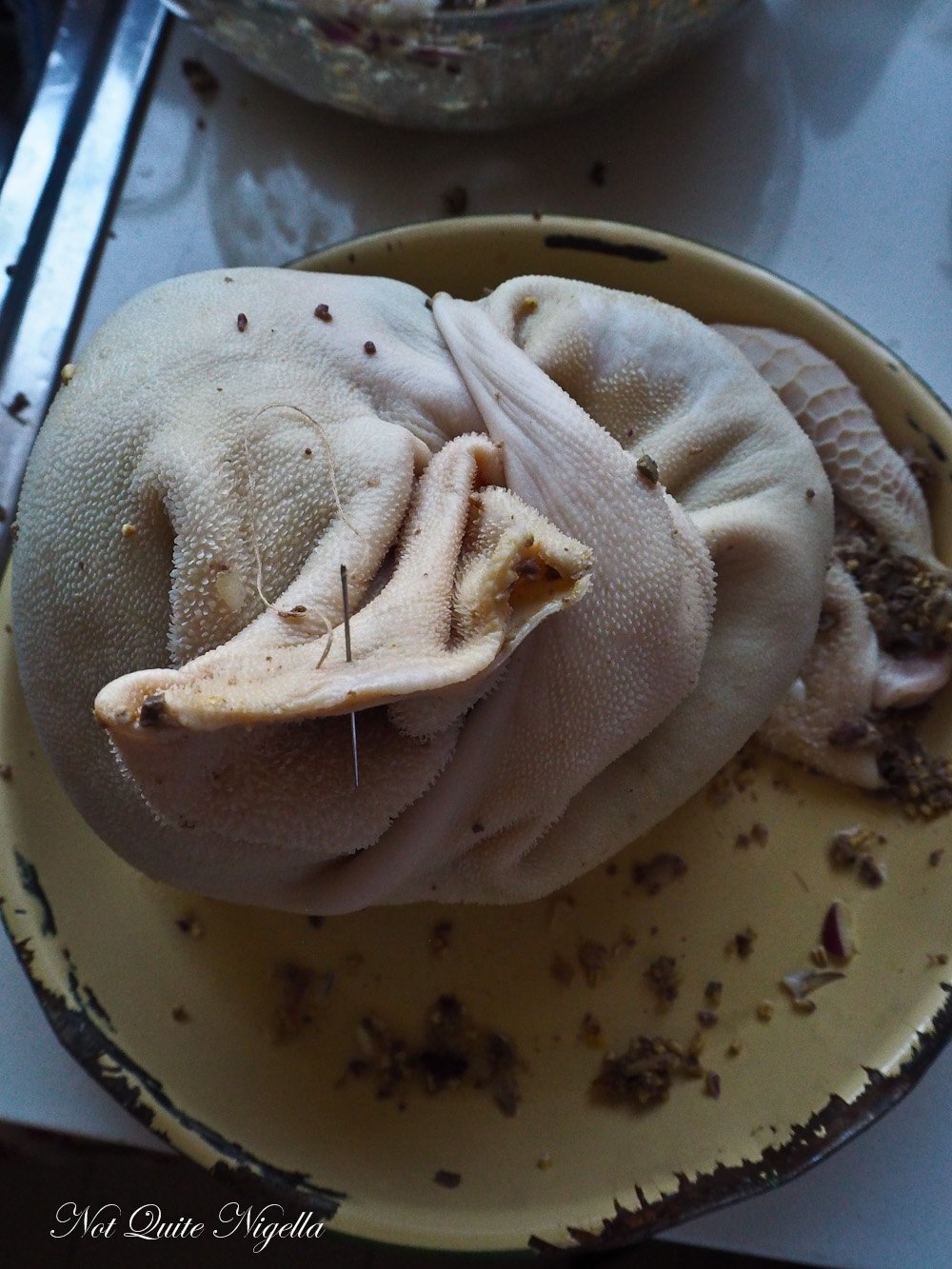 I found that in Scotland, haggis varied a lot. Some were strong in an offal aroma, some mild but like Goldilocks I tried them all and found one that I absolutely loved. Made by boutique butcher Findlay's of Portobello it was a cross cultural haggis made with curry spices for an Indian bride and a Scottish groom. These aromatic spices help to mask any of the distinctive offal odours. And when Eurovision rolled around, I claimed Scotland as my country and decided to make haggis and cranachan (a delicious Scottish dessert involving cream, raspberries and toasted oats).

I started with a phone call to the butcher. I may be known afterwards as the "crazy haggis lady" but that was ok with me, before that I was the "Crazy In N Out Burger lady" and before that I was the "crazy lady that wanted to buy poison". The butcher rang me back. If I could give him two days then he could give me everything that I ordered. I added some lean and fat lamb trimming and some suet to the order and counted down the days until Eurovision. Haggis is actually not that difficult - time consuming yes and altogether different from anything else really but not difficult. But you do need time. 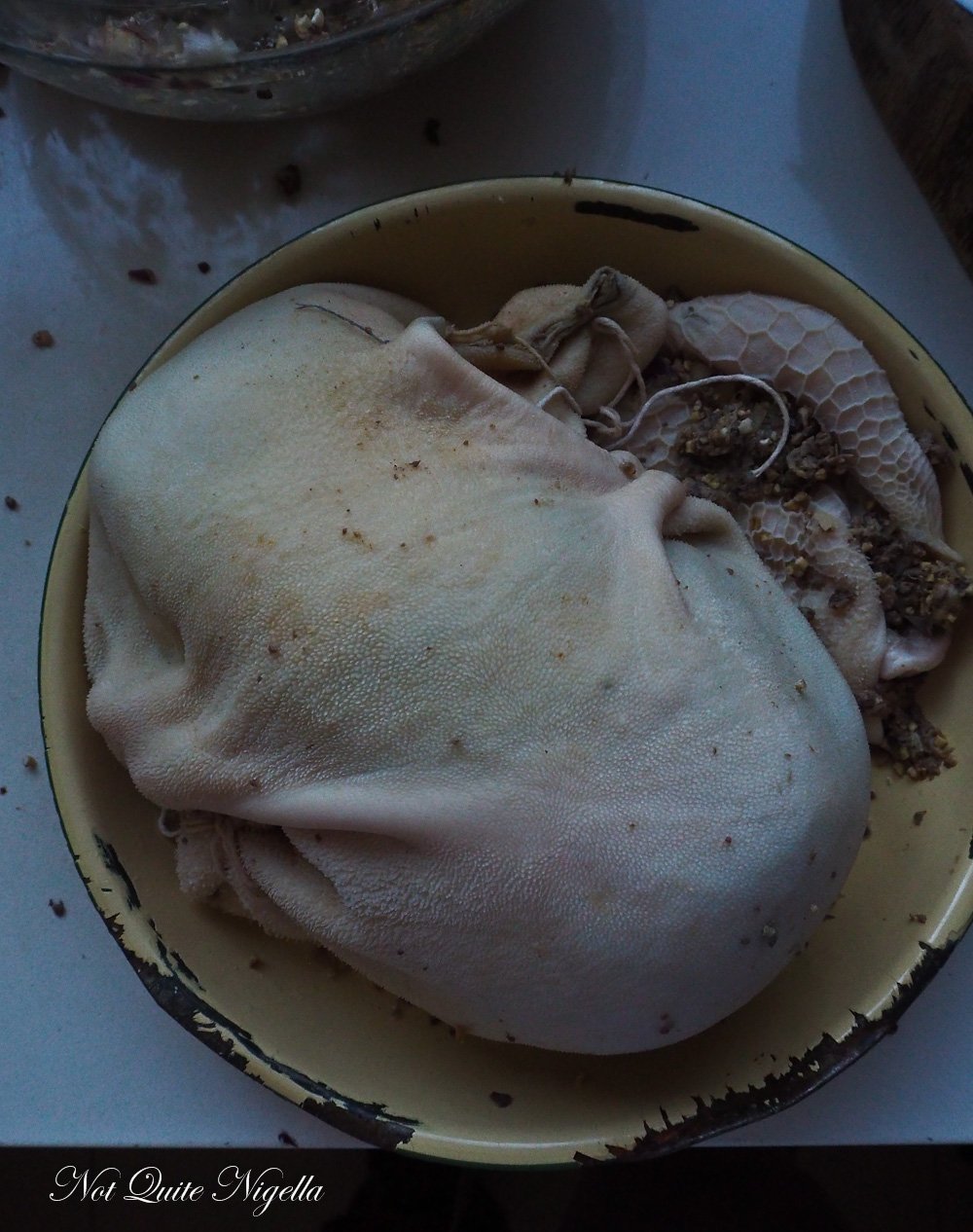 I set aside a whole Saturday for this - in truth I didn't want to spend a whole Saturday with my hand up a sheep's stomach but sometimes things work out that way. It was mostly waiting and scrubbing. That is, scrubbing of the sheep's stomach. Tripe has a smell and it reminds me of (not surprisingly) waste and stomach acids, kind of like when you vomit. Charming no? There goes anyone else that was reading... Anyway so now I only have those really interested reading. Cleaning stomach or tripe is a big process and can involve bleaching and resting it in soaking water overnight but I didn't have the time or forethought for that. I scrubbed it inside and out with a scourer with dishwashing liquid. About half of the aroma disappeared but I didn't have time to soak and bleach it. So in the stuffing went and I boiled it. It smelled, well not great I will admit, even with the curry spices. 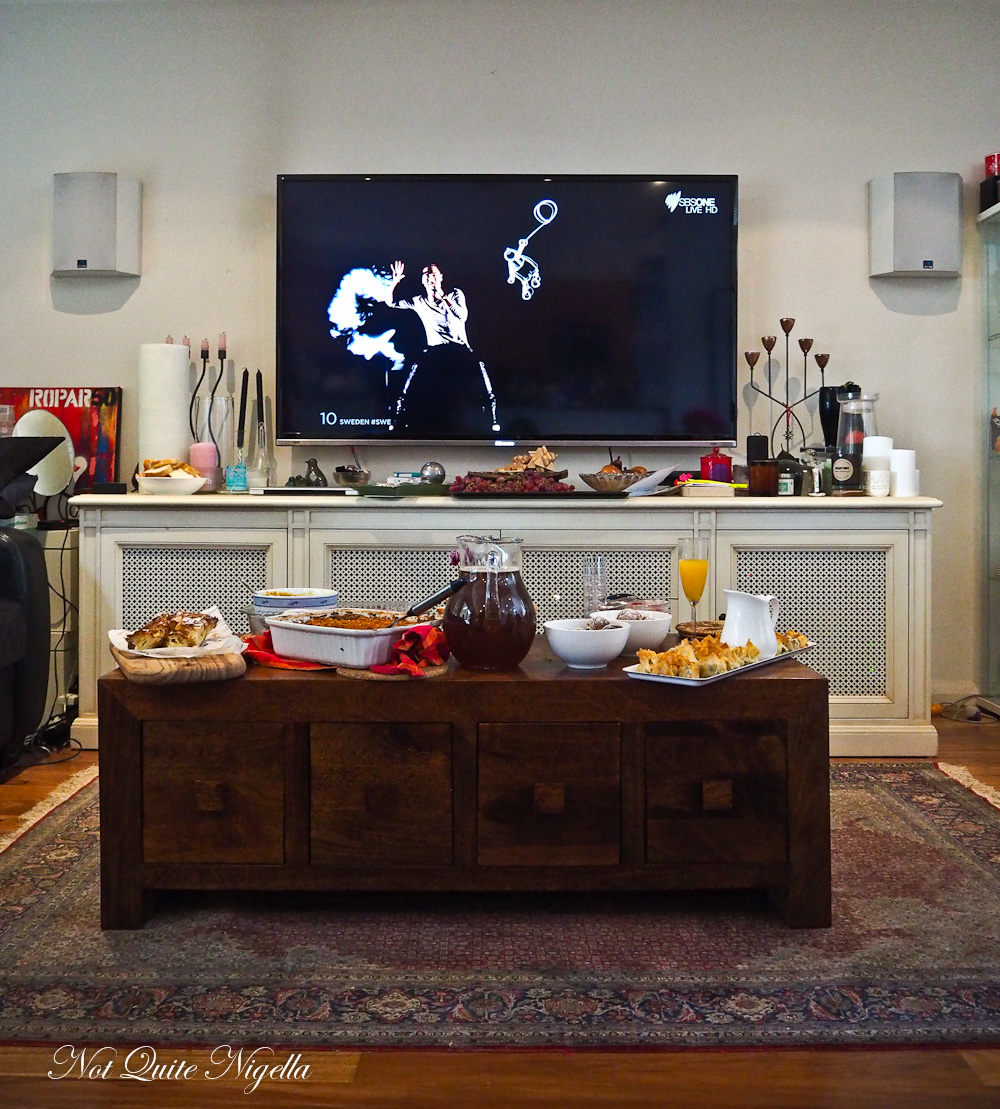 After three hours I pulled it out of the pot and allowed it to cool. I refrigerated it and very early the next morning I cut into it. Once it was refrigerated the smell of tripe completely disappeared. It was delicious! I made some haggis bon bons while Mr NQN made the whisky sauce to accompany it and a breakfast cranachan. Because of the amount of suet in it, haggis or anything you make with haggis like bonbons is best served hot because otherwise you can really taste the suet or lamb fat but it was surprisingly well received and everyone seemed to like it. One thing was that the curry spices were faint - if I were to do it again I'd double the spices. Hmmm did I really say that I'd make it again? Maybe, when Australia gets to participate in Eurovision again! ;)

So tell me Dear Reader, what items do you have on your bucket list? Is there something that you've always wanted to make or eat? And are you a haggis fan? Do you eat much offal? And are you into Eurovision?

Edited to add: here's a video of how to make haggis too! That is, the video that nobody asked for... 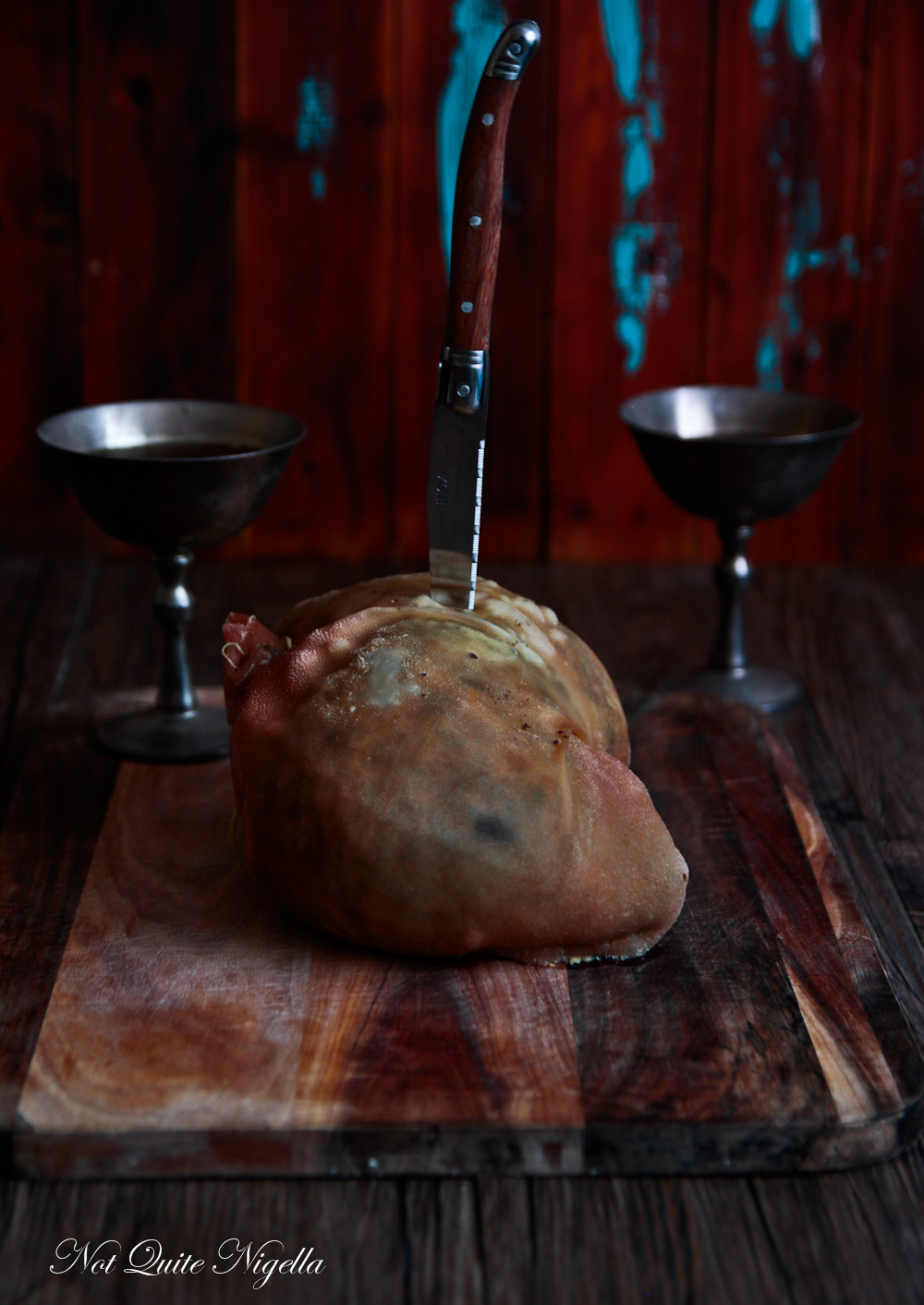 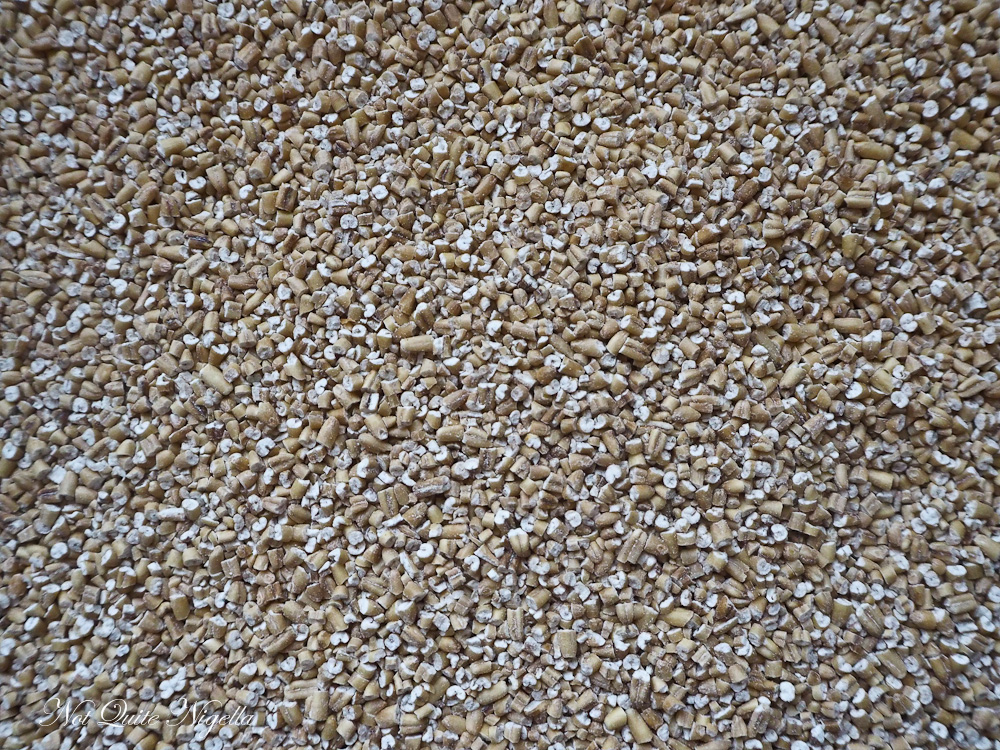 Close up of texture of the pinhead oats

*To toast oats, lay them out on a baking tray and bake in a 180C/350F oven for 10 minutes or so (be careful they don't burn). You can also toast them in a large dry frying pan. You cannot use rolled oats for haggis as they have a completely different texture. 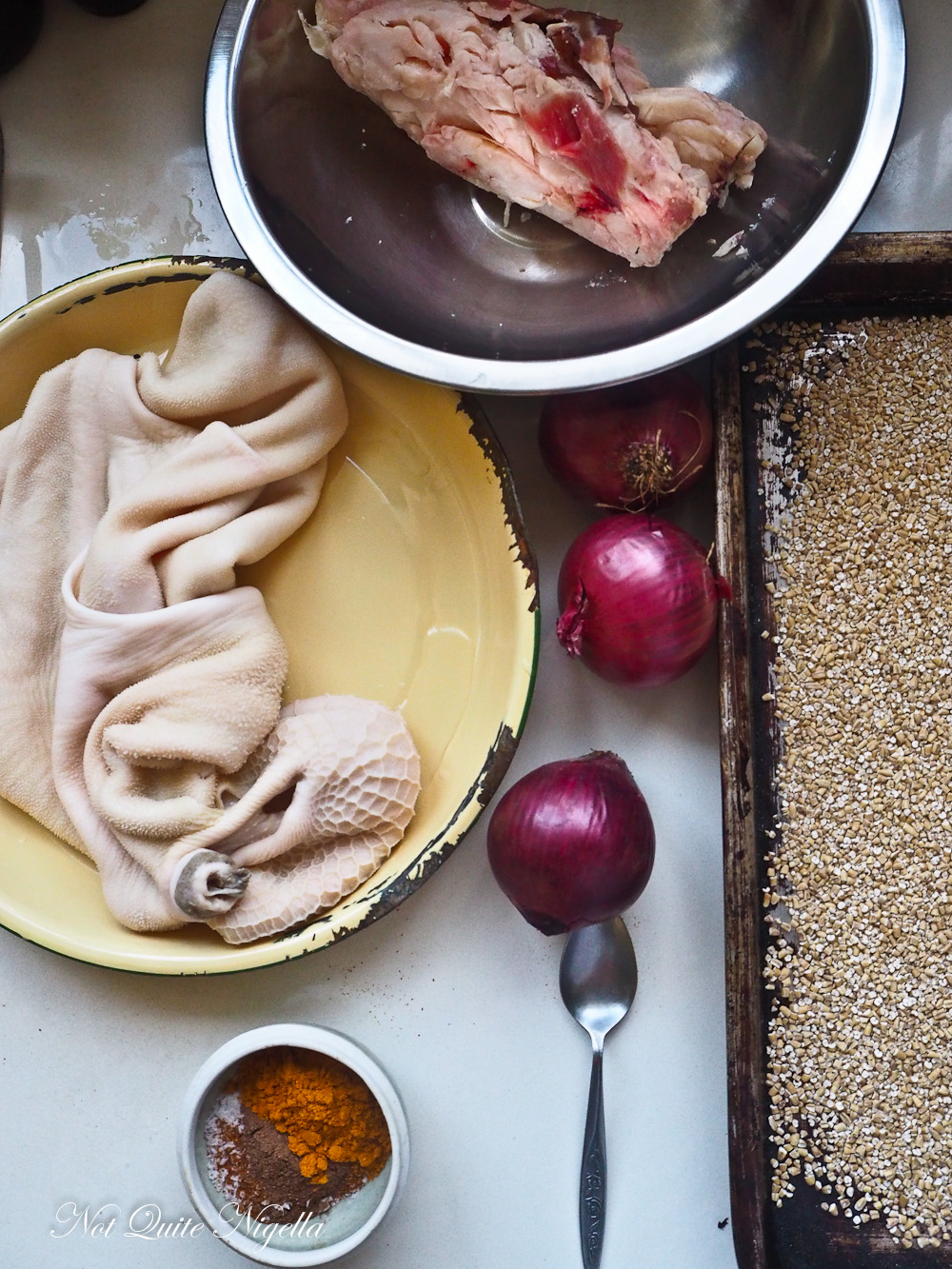 Step 1 - Wash the heart, lungs and liver and place in a pot full of water along with the lamb fat and lean trimmings and bring to a boil. Simmer for 2.5 hours (I started a bit late so I put this in a pressure cooker for 45 minutes). 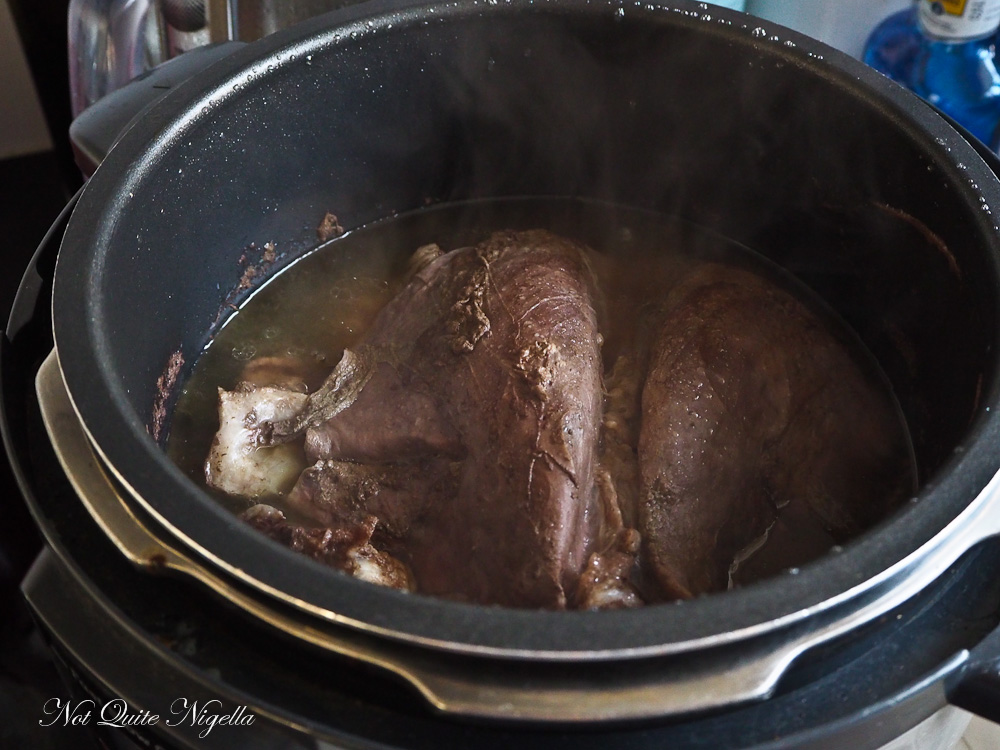 Step 2 - While this is cooking, clean the stomach by scrubbing it well with detergent and a scrubber. It is tough and flexible so you can turn it inside out to wash out the smell. The stomach smells while it is cooking but it doesn't impart a flavour to the haggis once cooked and cooled if you clean it as best you can in this step. 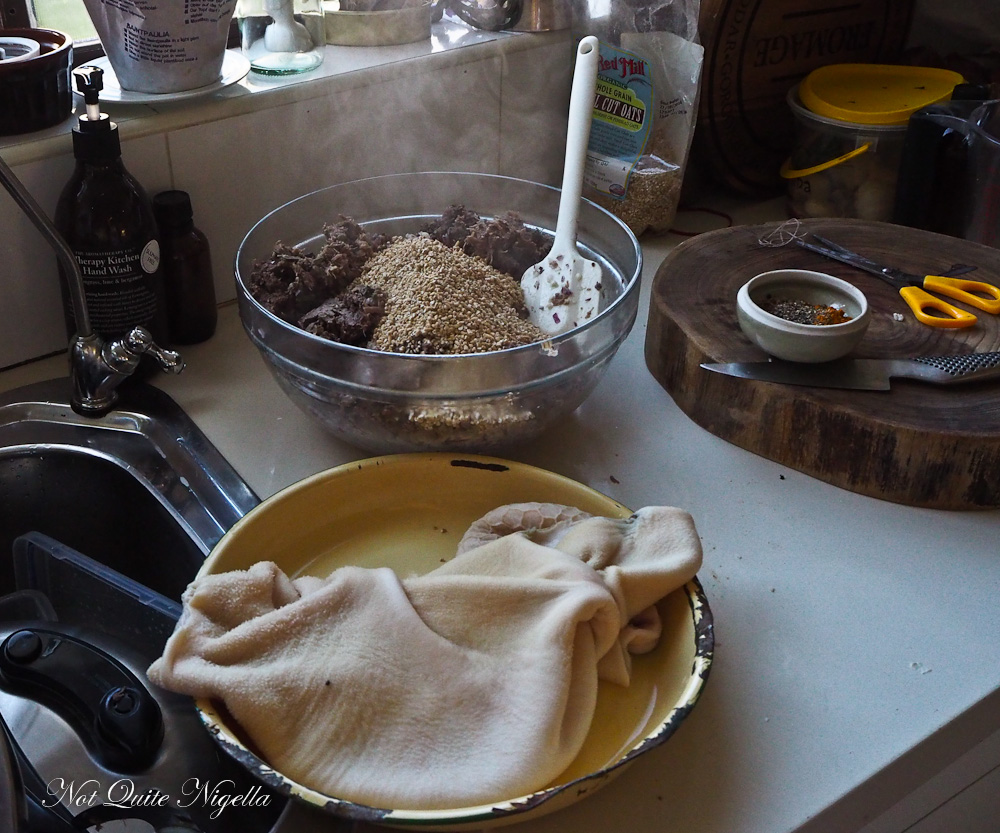 Step 3 - Remove meat and offal from the pot reserving the liquid and place the meat and offal in a mincer (I used a food processor). Place the minced meat and offal in a bowl and add the chopped suet, onions, oatmeal, salt, pepper, curry powder, cayenne pepper and allspice. Mix to combine. Taste a little for seasoning. A lot of the flavour gets cooked out in the water so don't worry if the curry is too strong at this point. You may even want to add more. 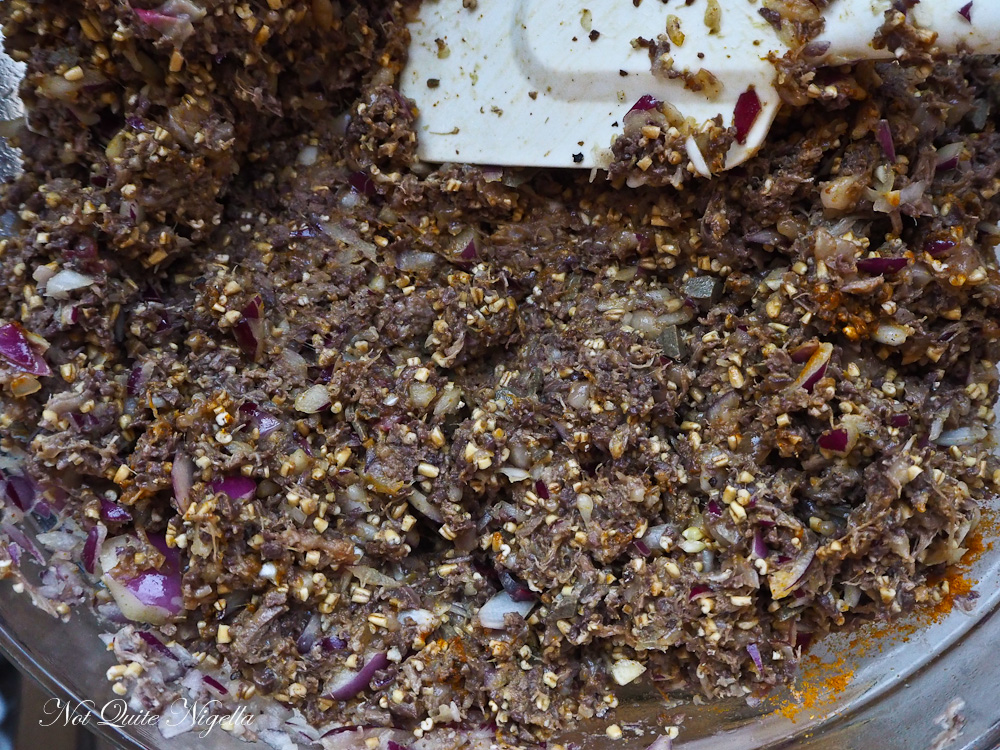 Step 4 - Place a large pot of water onto boil (one large enough to fit the haggis). Stuff the stomach about 80% full with the haggis meat. You can tie the ends with string to seal them shut or you can sew the ends together. You don't need a particularly strong needle and thread, any kind will do. 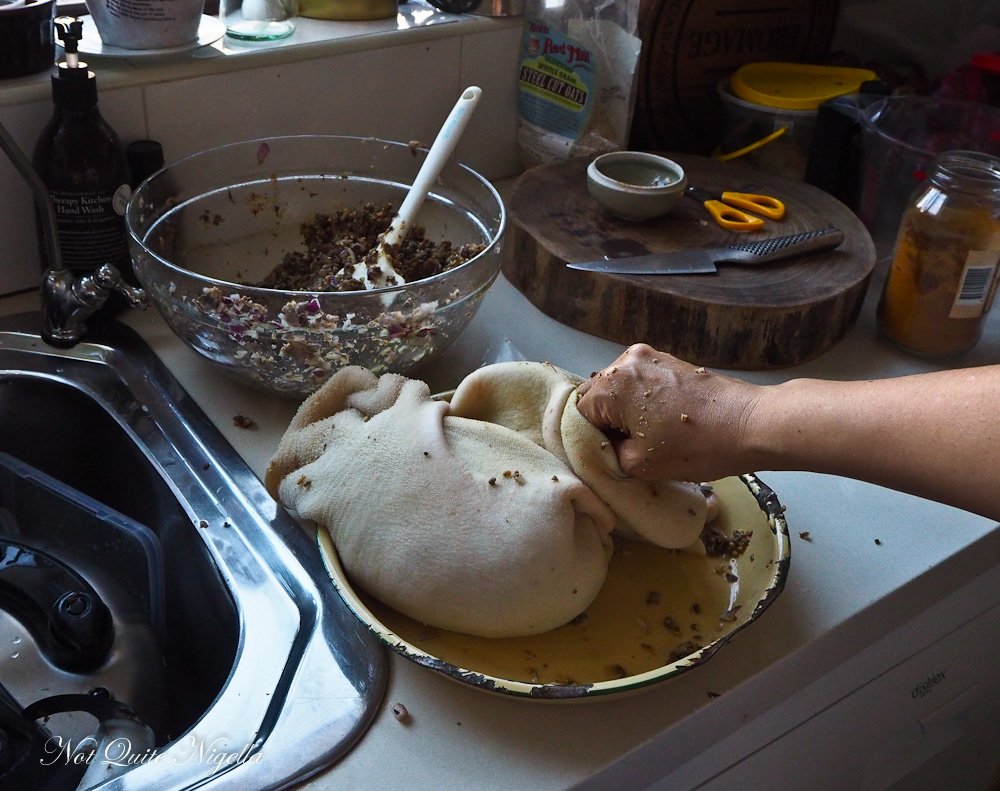 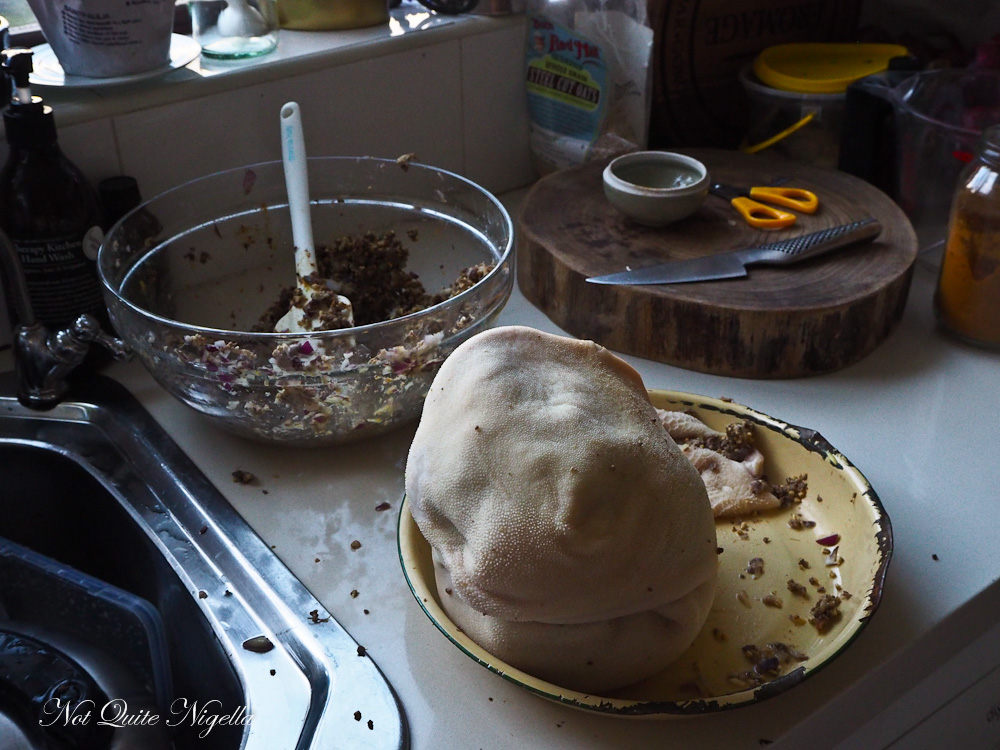 Step 5 - Place the haggis in the simmering water and bring to a boil. Prick in a couple of places with a needle so that it doesn't explode. Prick it every 30 minutes or so in different areas. Cook for 3 hours. Drain the water away and refrigerate or serve straight away with whisky sauce. 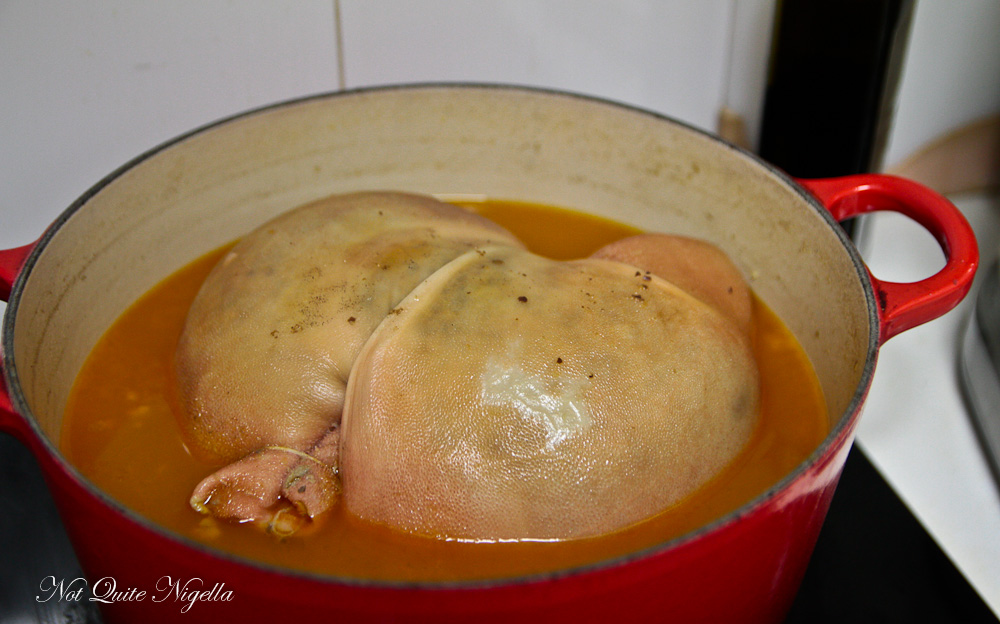 Step 6 - To make whisky sauce, place the cream, whisky, mustard, honey, salt and pepper into a small saucepan and allow the alcohol to evaporate by boiling for a couple of minutes. The sauce will thicken a little.

Step 1 - Preheat oven to 180C/350F and line two baking trays with parchment. Lay out one sheet of filo pastry and brush with butter. Lay another sheet on top and brush with butter. Cut into six squares and place a ball the size of a walnut in the centre of each square0 Gather up the pastry on all sides and gently secure shut with a gentle twist. Brush with a little extra butter and place on baking tray.