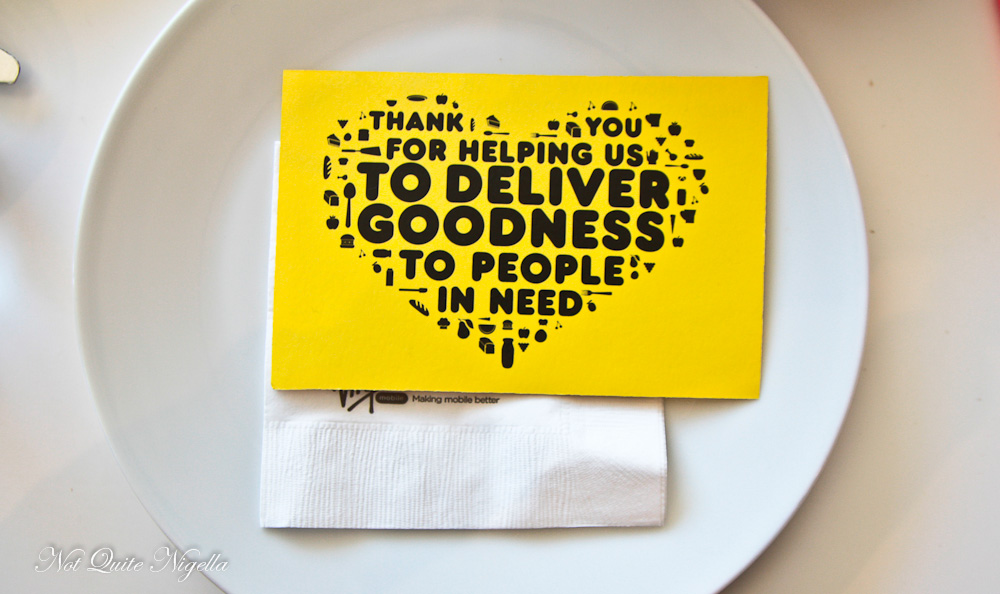 Food charity OzHarvest's new cafe Harvested in Pyrmont uses entirely rescued food in their kitchens. For the modest cost of $15 or $20 per person, diners can get a three course meal. What makes the deal even sweeter is how that money is used afterwards. So what does rescued food look like on the plate? The meals that you might find here might surprise you.

Once in a while it's nice to let other people choose where to eat. Don't get me wrong, I love choosing where to eat because hopefully it's somewhere that I can write about and my friends are usually really easy going and up for any sort of adventure. But while I was overseas Celia and Jaqi made plans to have lunch at a place that I was eager to go to: Harvested by the OzHarvest charity and they invited me along.

OzHarvest is the brainchild of founder Ronni Khan and the charity collects 340,000 kilograms of surplus food each month from a range of businesses big and small. To take a peek at what it's like to do this take a peek at my story where I spent a morning rescuing food with OzHarvest. The next idea for this clever charity was to open a cafe. 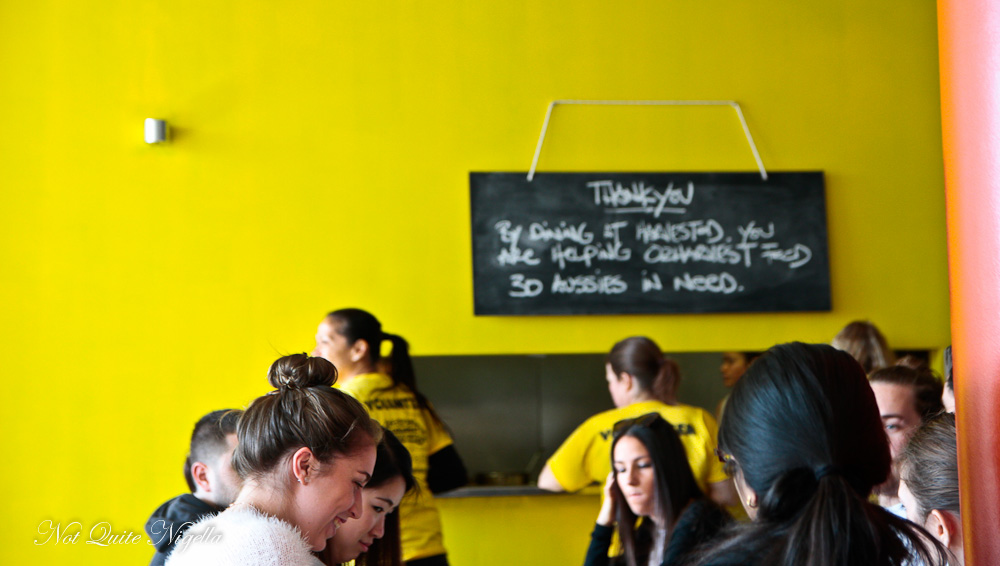 The cafe aptly named Harvested sits on Harris Street in Pyrmont in temporary premises. Originally designed as a pop up for July 2015, there has been much demand and an extension has been granted until the end of August. They have been given this space by City West Housing until it is closed down for demolition. The plan is to move to other premises taking their kitchen equipment with them.

Fine dining Head Chef Travis Harvey heads OzHarvest's Cooking For a Cause Program and devises menus based on what is rescued and sent to them. The cafe is open on Tuesday and Wednesday for lunch and for special charity events. And just how much is rescued and do they have to order produce in to supplement it? He assures us that they don't actually need to order anything and all of the food is rescued from going into a landfill (although obviously there are stores of things and they do freeze proteins if there is a surplus). 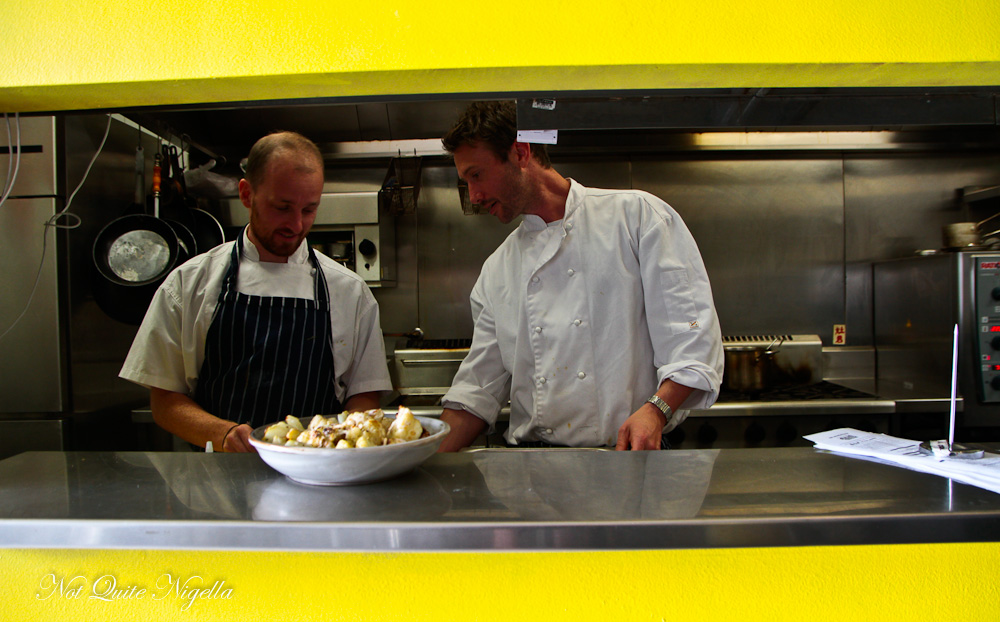 It's very busy on the Wednesday that we visit and the volunteers cover the floor. You pay before you sit down and there is an indoor and a covered outdoor section that in total seats about 60 people. $20 buys you a three course lunch which is phenomenal value (you can also go for $15 without dessert). But not only that but for every person that pays $15, OzHarvest delivers 30 meals to people in need which is a heart warming idea. For Travis the idea is also to show people what rescued food looks like - that is, no different to other food.

Customers pay at the counter and then take a seat at a table and fill in the form. It changes daily according to the produce and there are six selections to choose from and items are marked gluten free and vegetarian. Our lovely volunteer Dale says that between the three of us, we can choose up to four items. They will arrive share style and cutlery is in a jar on the table. The whole ethos behind the cafe is generosity and if you want seconds of any course you just need to ask and there is no extra charge. Service is warm and friendly from everyone and the atmosphere is welcoming. 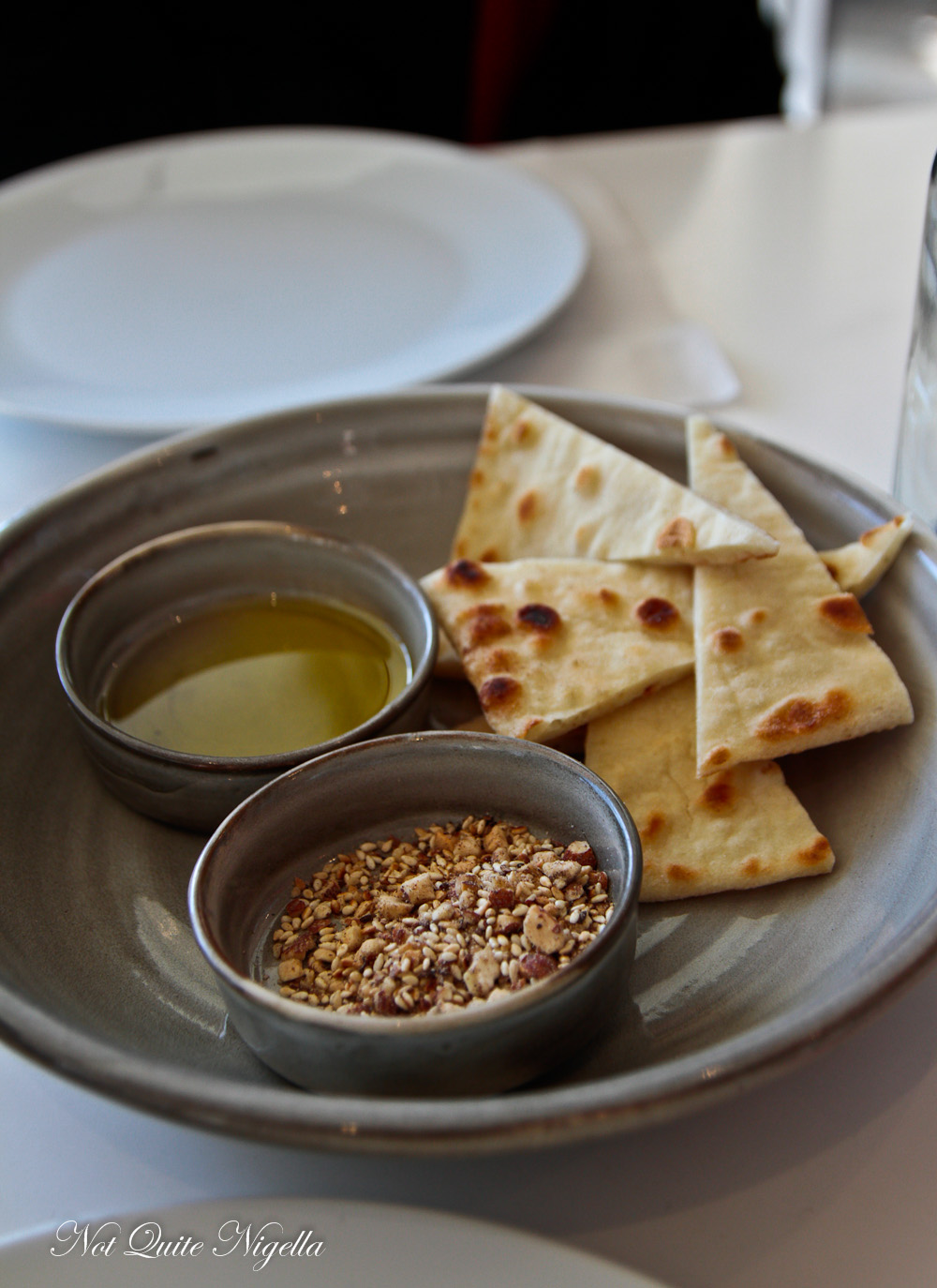 Our first course arrives and it's a surprise course. Because not only do you get three courses you get complimentary bread. The flatbread is made on the premises and served warm with olive oil and a crunchy, aromatic dukkah. We dip the fresh, soft bread into the oil and then the dukkah and chew contentedly. 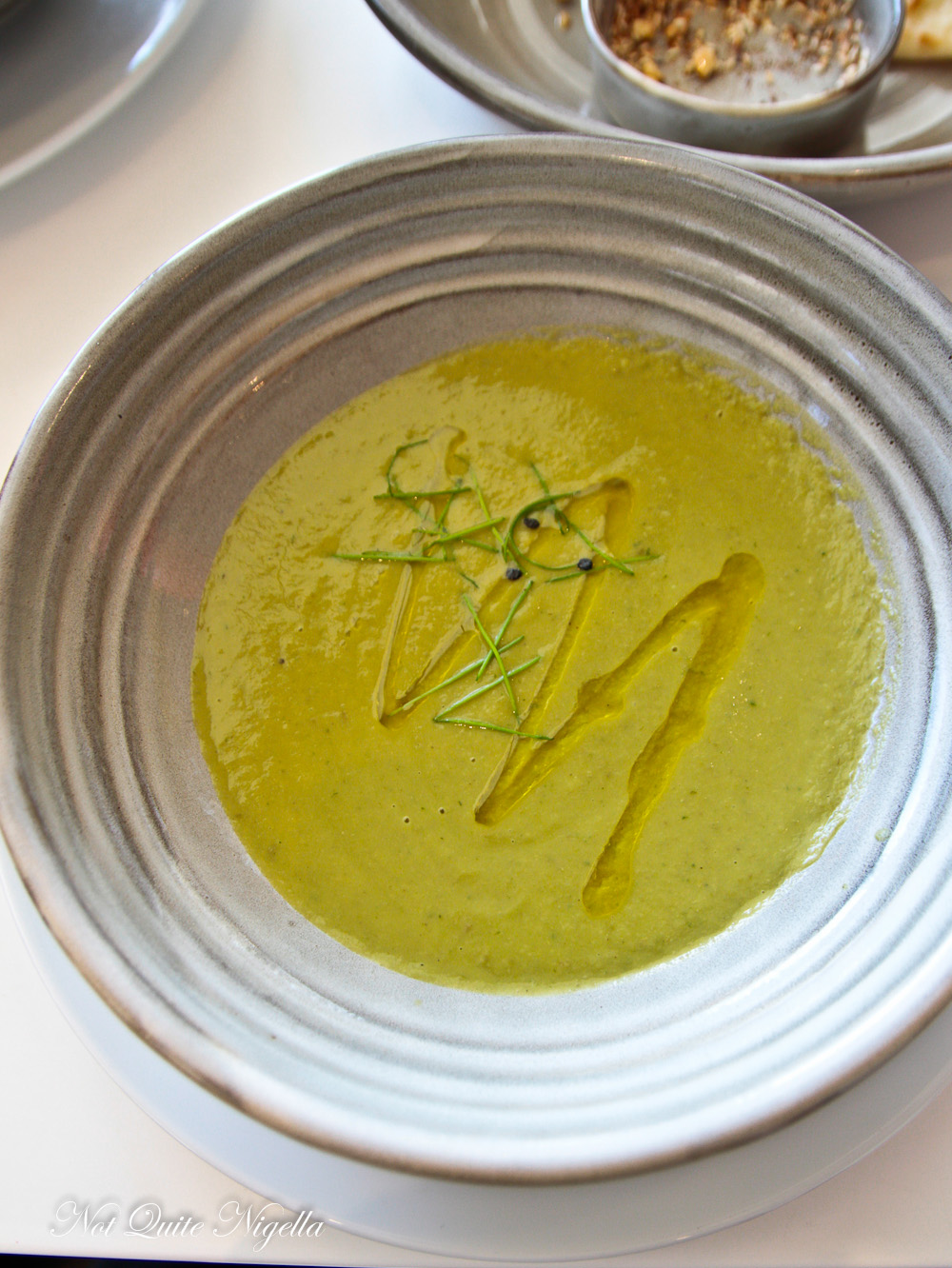 The soup arrives and it is served in separate bowls (the soup is the only course not served share style). It is an asparagus and broad bean soup with lemon oil and a touch of heat. It's creamy and warming and absolutely delicious especially when you dip a bit of bread into it. 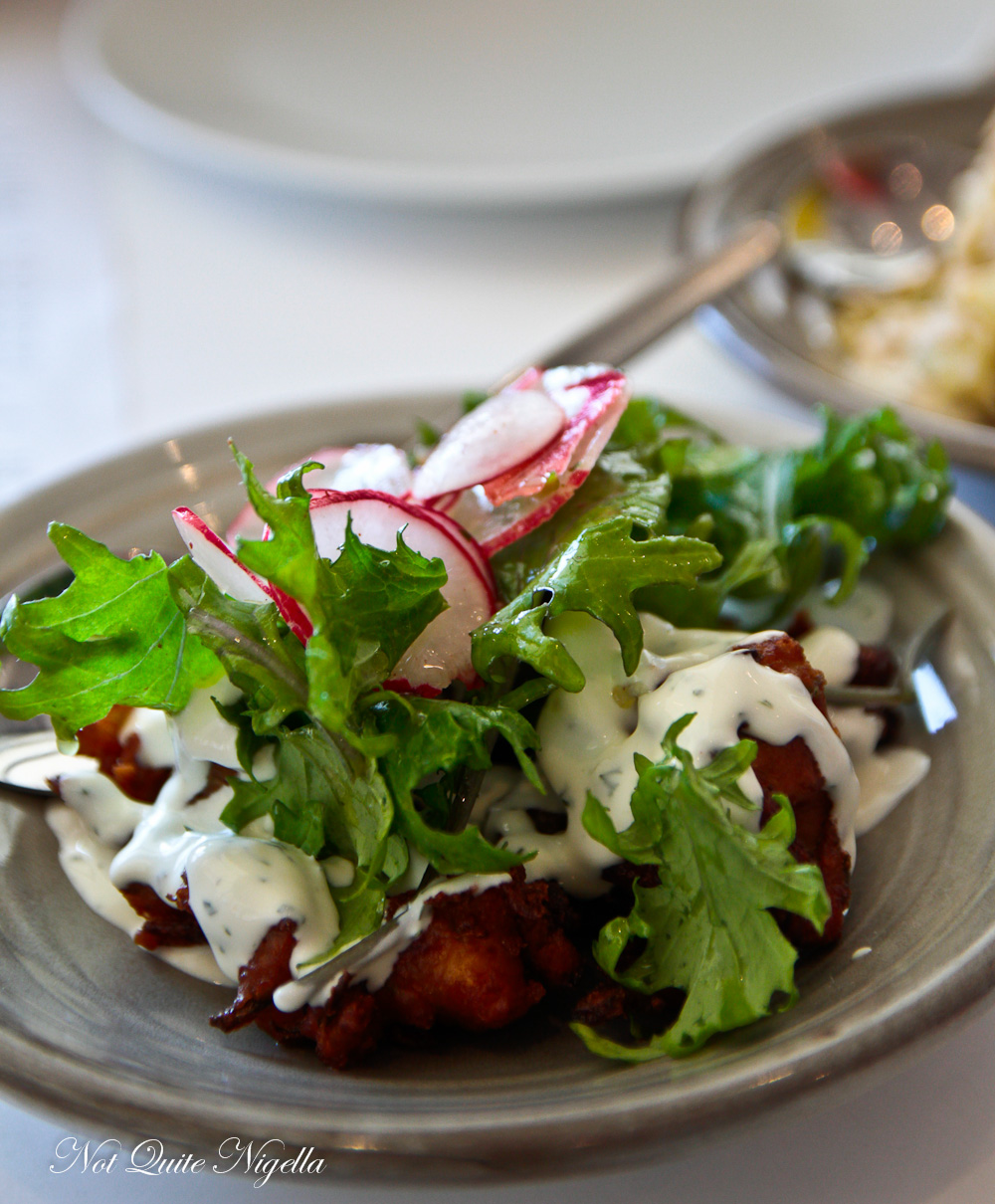 The two next courses arrive together share style. It's a neat portion but we are encouraged to order seconds if we want. The zucchini fritters are flavoursome and moreish and paired well with a yogurt sauce. We like the emphasis on vegetables on the menu too. 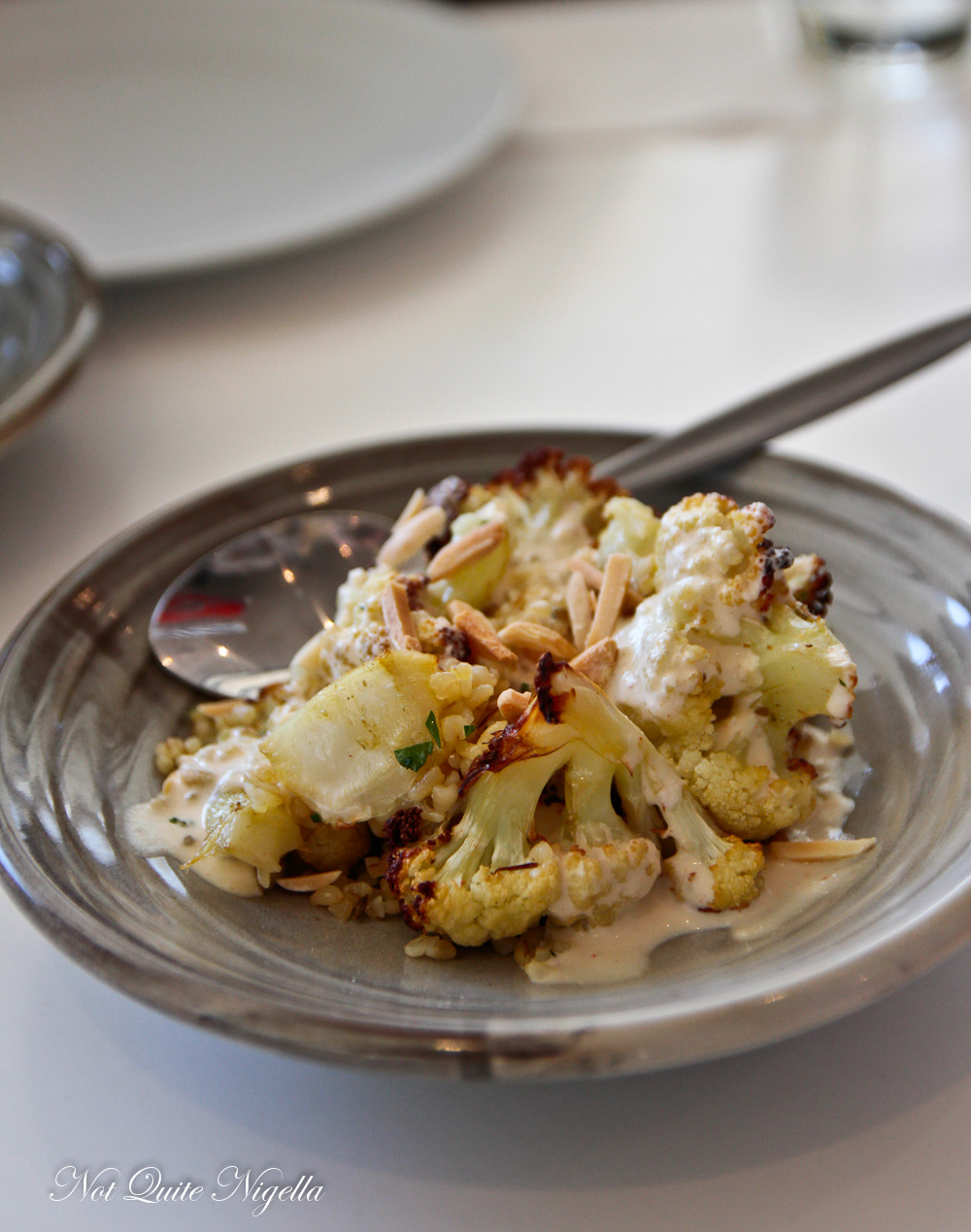 I am a huge roast cauliflower fan and it is caramelised and soft and served with cracked wheat, herbs, almonds and tahini. I contemplate ordering more of this but now I'm just being gluttonous. 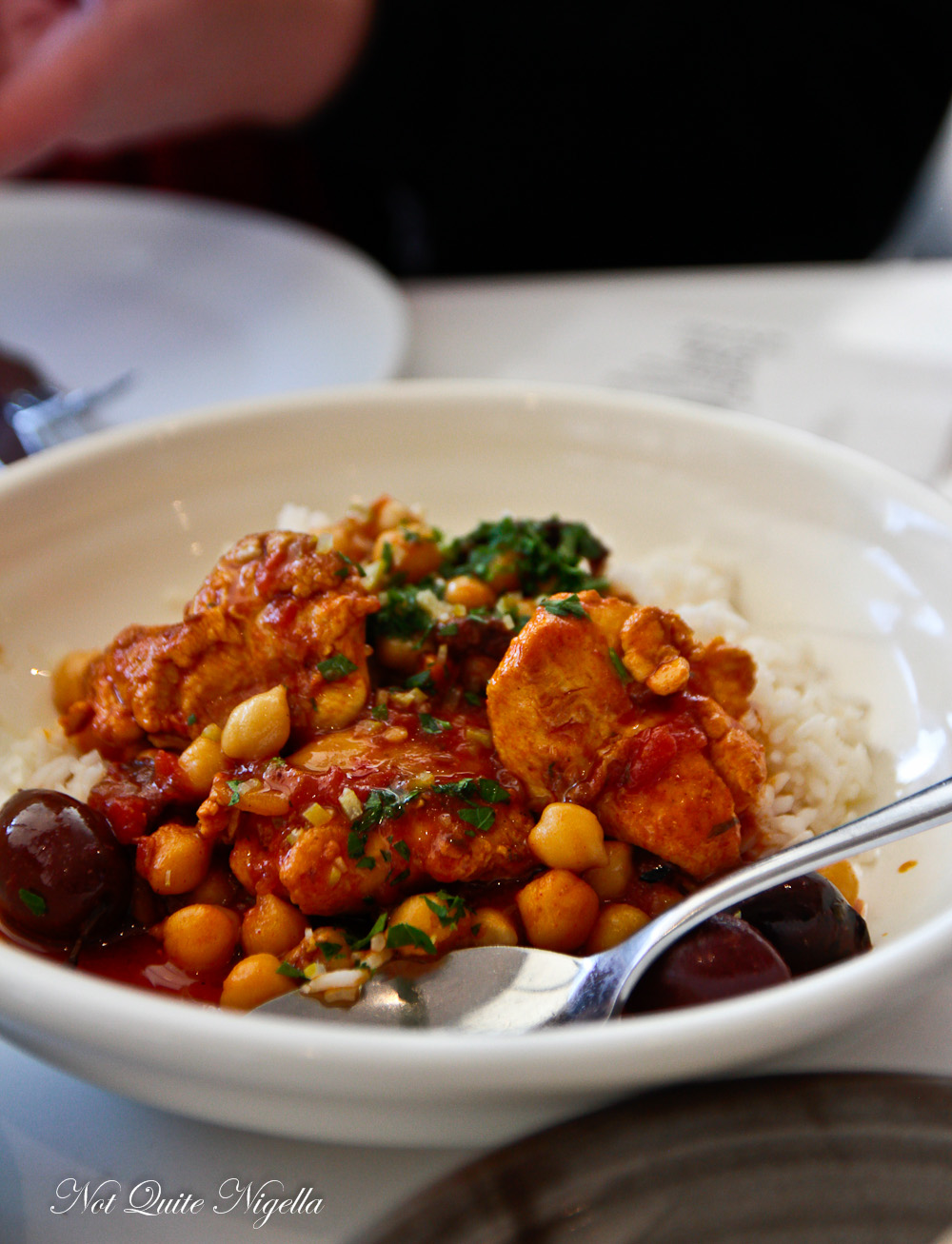 We try some chicken. There is a citrus aroma that I can smell straight away which is the preserved lime. The flavours of this chicken are wonderfully sweet with prunes, chickpeas and rice alongside the tomato based tagine. It's warming, perfectly seasoned and delicious. We all remark on how the food tastes exactly like what you would get at a "non-rescue" restaurant, just without the higher price tag. 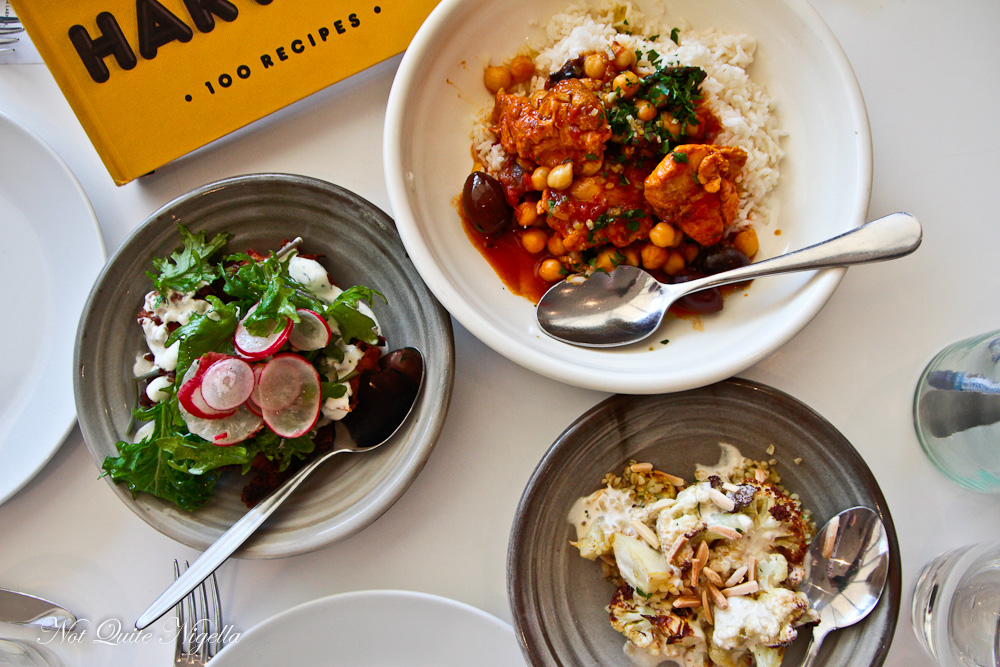 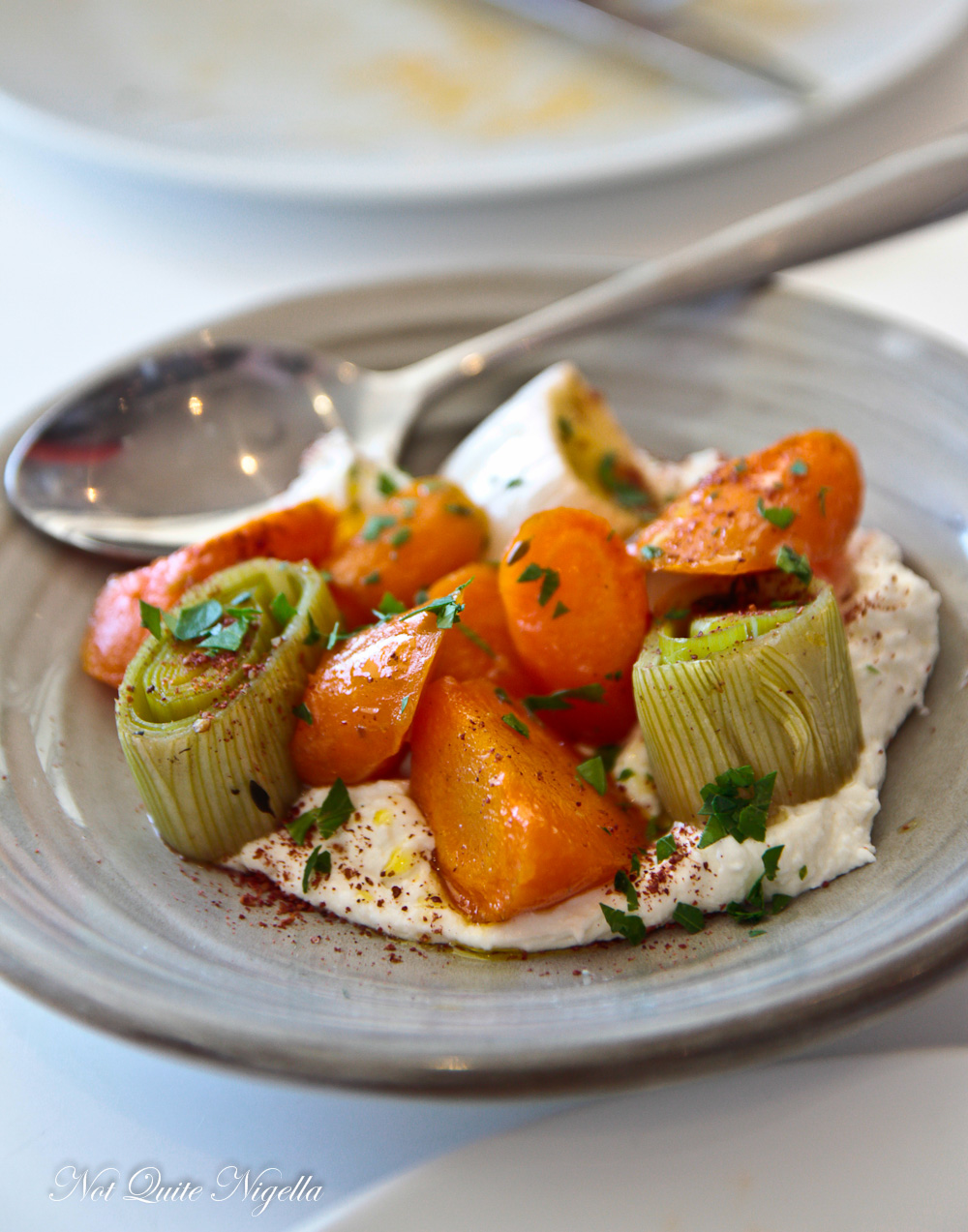 Celia has a hankering for a little something savoury before our dessert so we ask about the other savoury dishes and offer to pay extra to try the braised organic carrot and leeks. They were nice enough to give us a serving of the carrots as the pumpkin salad was sold out. The carrots and leeks are roasted until buttery soft and are given a gentle push towards richness with a light and creamy goats cheese. 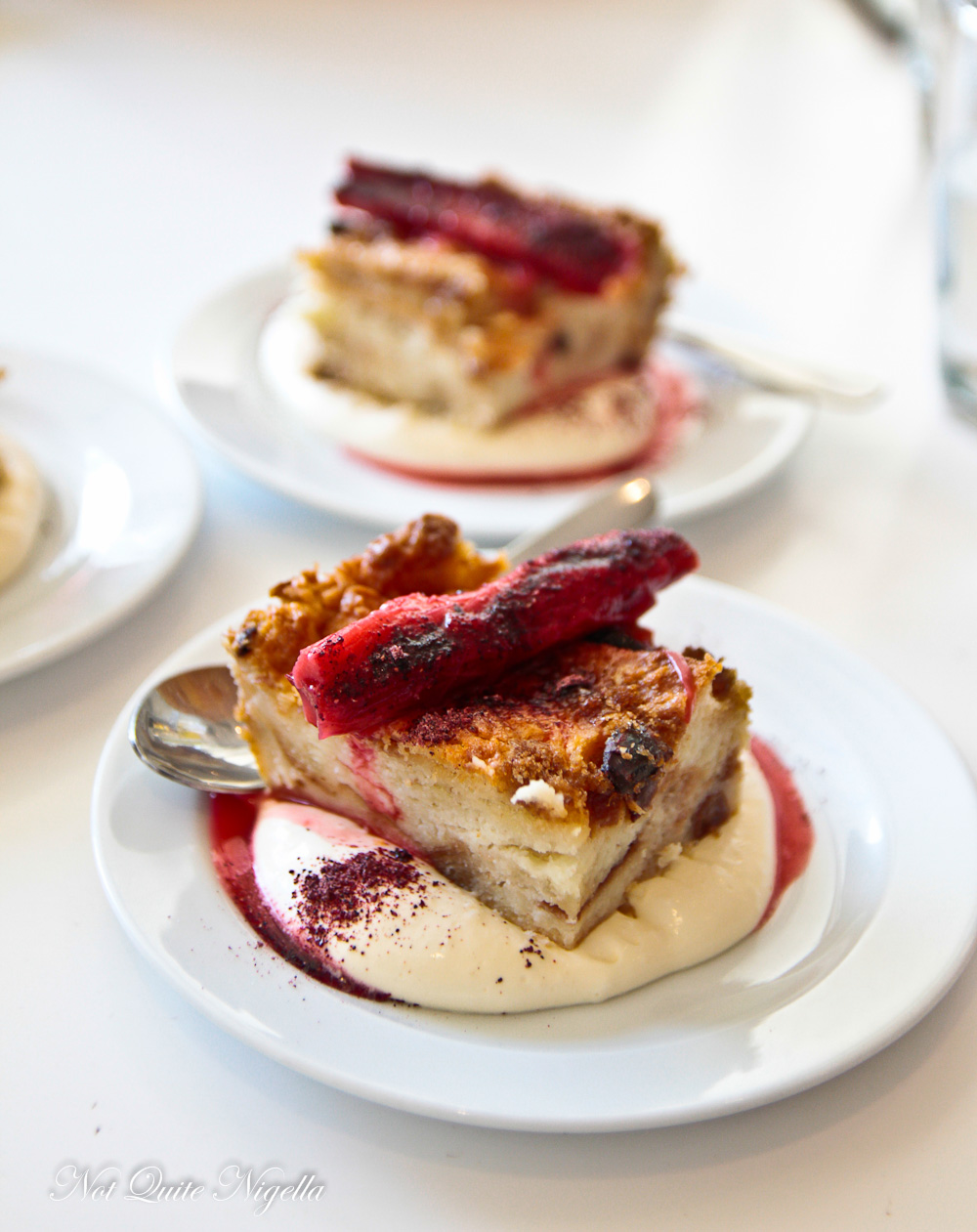 A lot of preserving goes on in the kitchens here to make use of the produce. The raspberry powder was made using an excess of fresh raspberries which obviously don't last very long when fresh. Here it is served on the dessert, a rich bread and butter pudding with a delightfully sticky crust on top. It sits on a bed of rosewater cream with a soft baton of tart, glazed rhubarb on top. The raspberry dust is a pretty touch and adds a tart zing of raspberry. 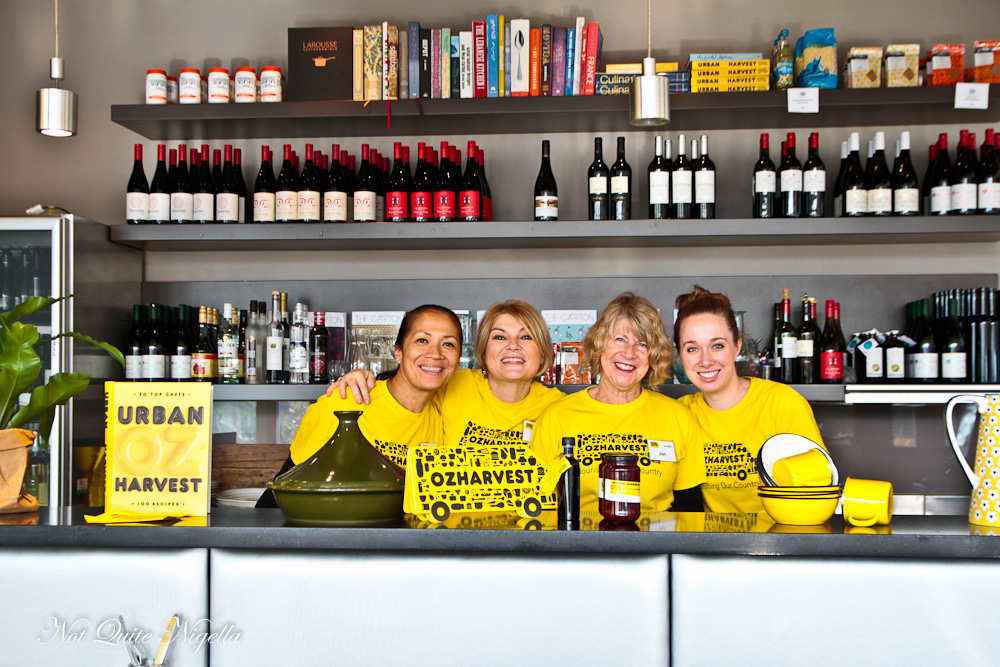 We are one of the last tables to leave. Jaqi is eager to chat to the chefs at the pass and they explain how they are holding events. Travis and Jed tell us that on Monday the 27th of July they are holding a Think. Eat. Save. event between 11.30am-2.00pm, in Martin Place, Sydney. Chefs such as Matt Moran, Neil Perry, Peter Gilmore, Guillaume Brahimi and Somer Sivrioglu will be lending a hand to create dishes for the public using rescued food. It is a free public event. Also for every meal featured on Instagram with a #mealforameal hastag, Virgin Mobile will donate the cost of a real meal to someone in need.

So tell me Dear Reader, would you try a cafe like this where the food is rescued? Would you be curious go to an event like this just to see what the food is like? And do you ever buy imperfect produce from the shops? 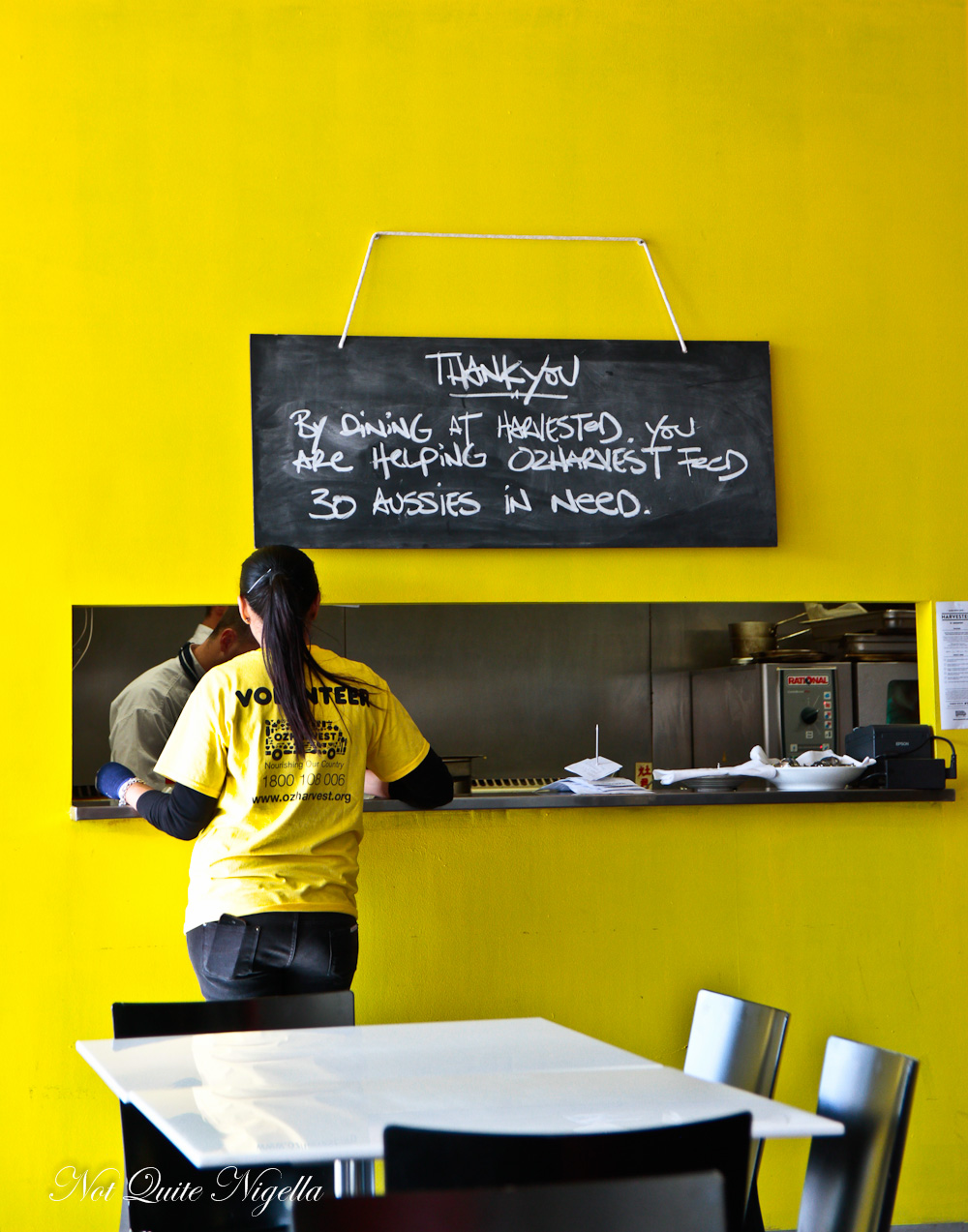