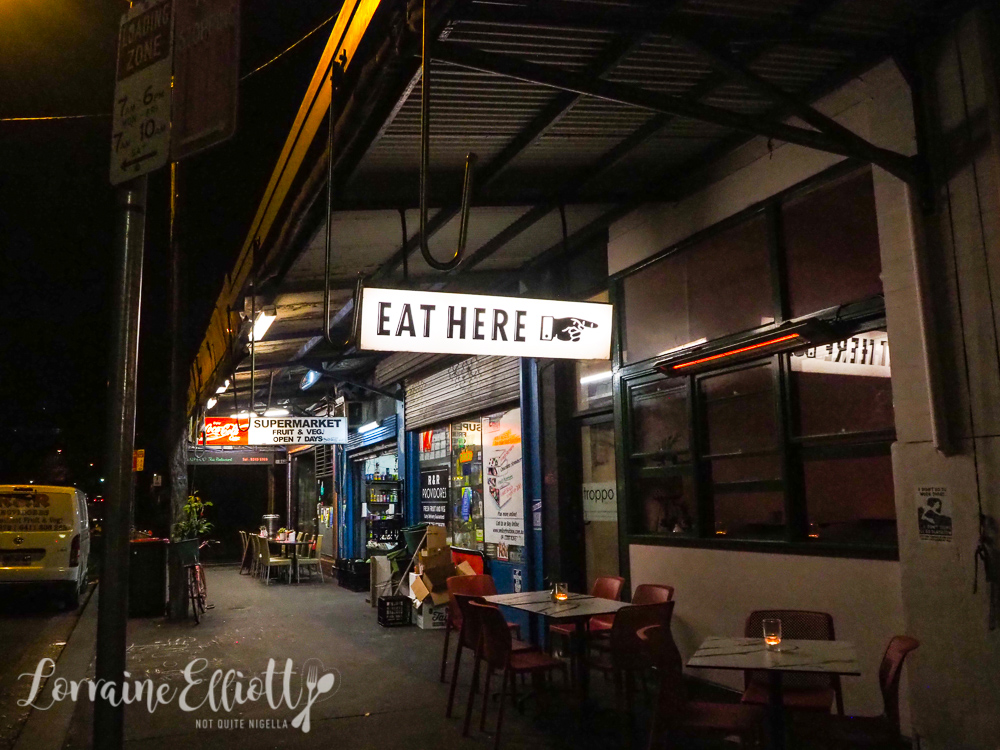 There's a seemingly never ending choice of eateries in Redfern. Southside Charmers is located on Chalmers Street in Redfern and takes over the Eathouse Diner space. There's a lunch menu and a newish after 3pm and 5pm menu on at night with influences from Mexico and other countries all at reasonable prices. 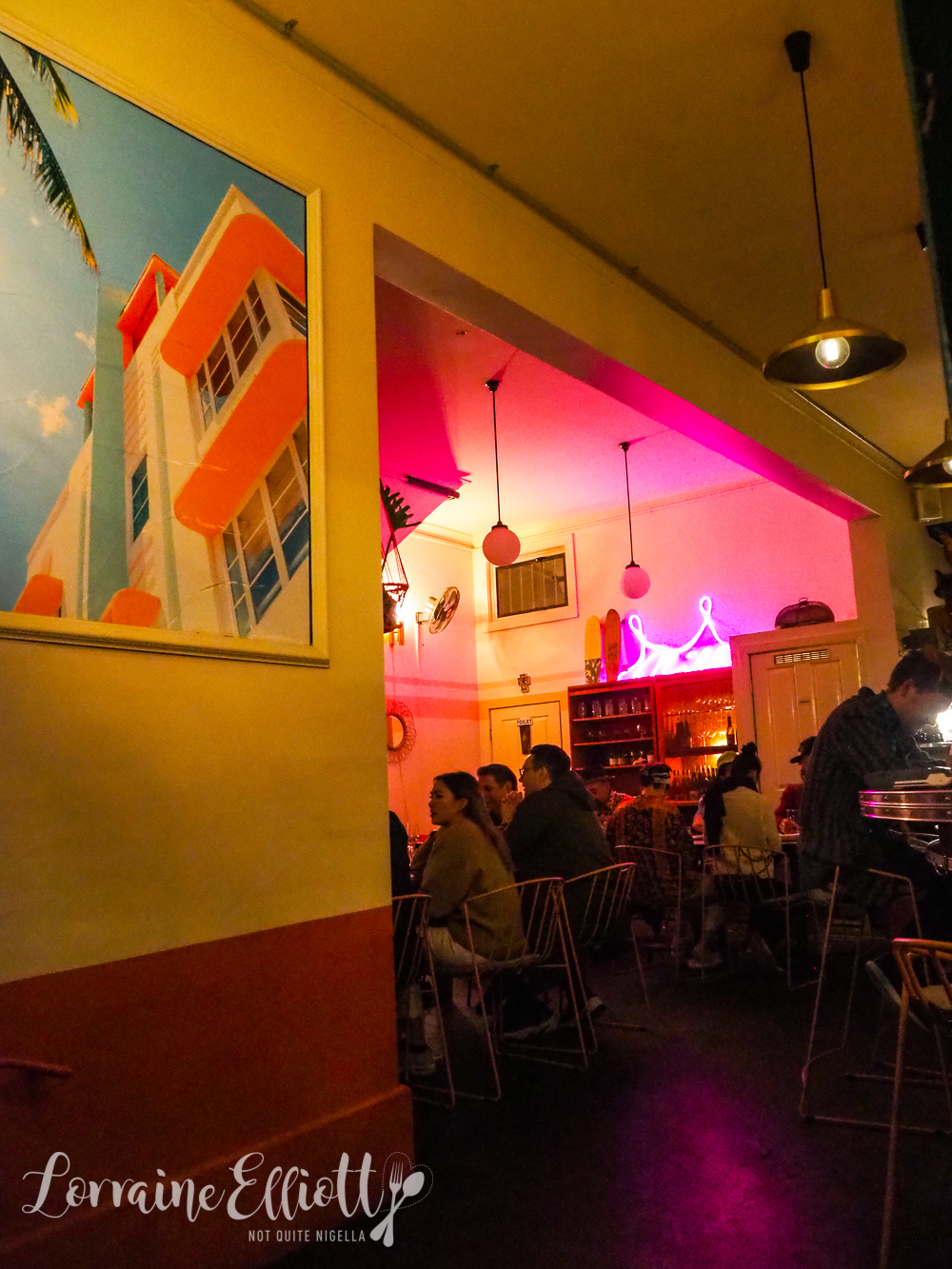 Southside Charmers came as a request from Ivy. Ever since her beloved dog Trevor passed away she wanted to spend as much time as possible with her remaining pupper Thor. My pilates studio is right near Southside Charmers and I spotted the outdoor tables and took a peek at their menu. It has everything that we needed- good, casual food, dog friendly tables and cocktails so we could toast little Trevor. 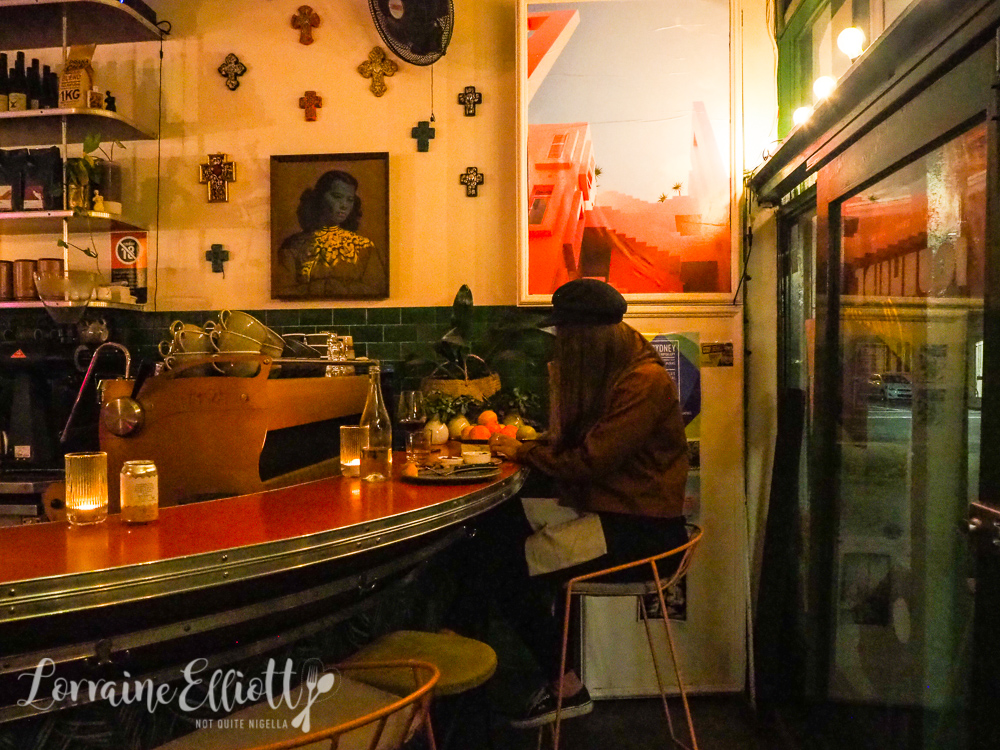 It is by Anne Cooper and Georgia Woodyard who had Scouts Honour and Bart Jnr also in Redfern. There's a retro curving bar, neon pink signs, eclectic paintings and a wall of crosses that remind us of Mexico. 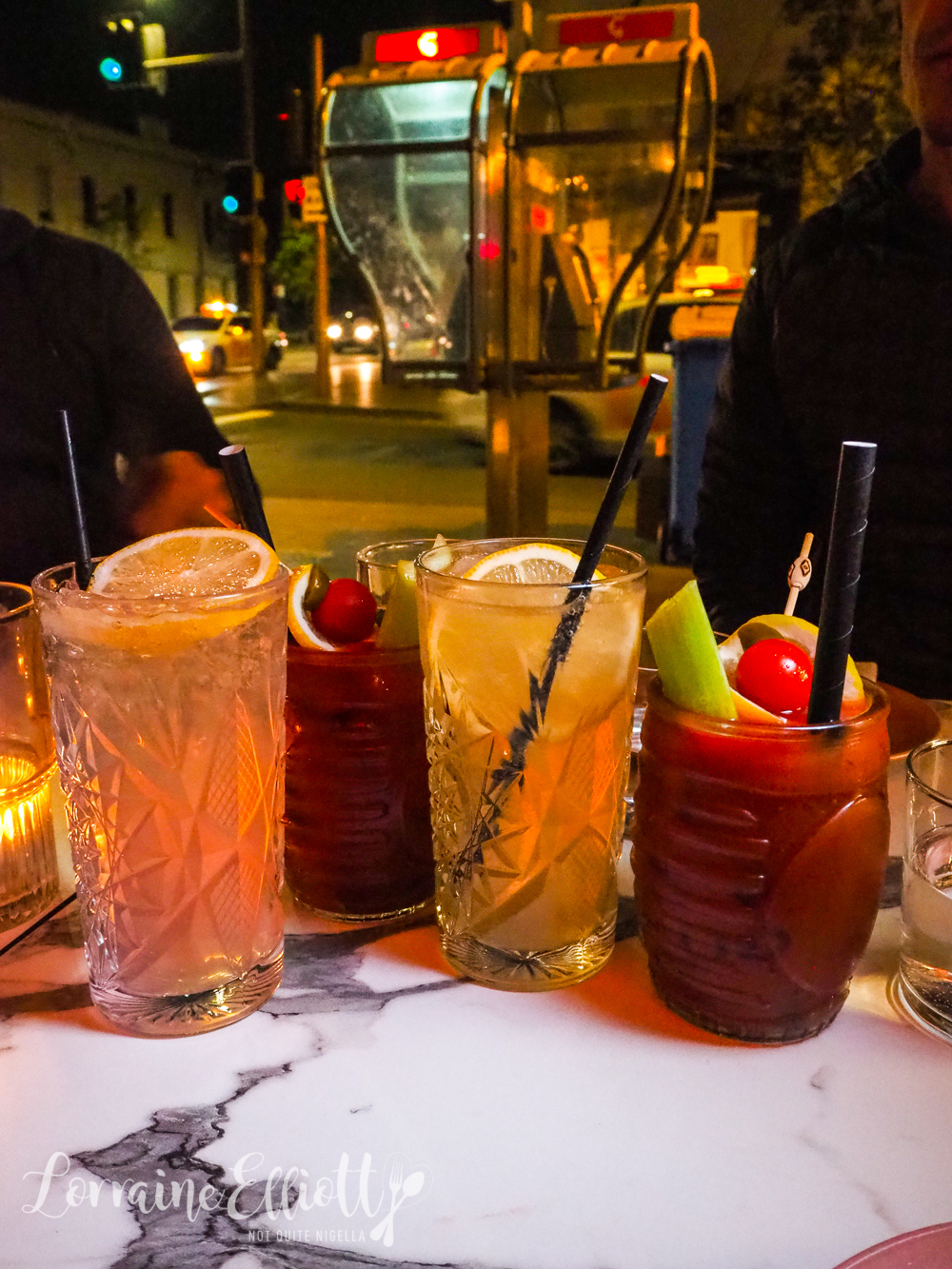 Our waiter Ryan is fantastic and easily charms everyone especially when he tells us that there is one serve of the beef short rib left and would we like to reserve it (I later find out that he used to work at Hubert which explains why the service is so good for such a casual setting). It's a resounding yes for me, short rib is probably my favourite beef dish. Ivy and I order shrubs while Mr NQN and Ryan both order the Jalapeno Bloody Mary which is delicious. My shrub is a peach and chilli shrub with gin while Ivy's is a rhubarb and ginger shrub with a shot of gin. 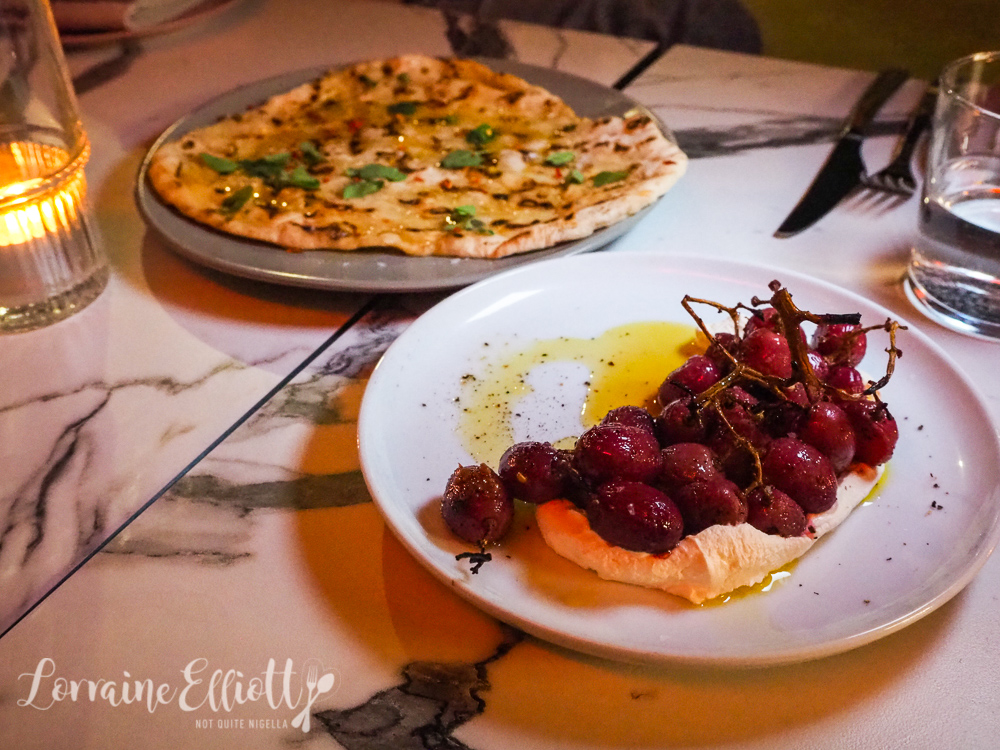 Why can't all meals start with dip and flatbread? The labne is creamy and goes well with the sweet pop of roasted dark grapes. You definitely want to order the flatbread because it is divine and soft with a nice sprinkle of chilli on top. The only complaint would be that there isn't quite enough labne to the grape ratio and you'd probably want to share the labne between 2-3 people. 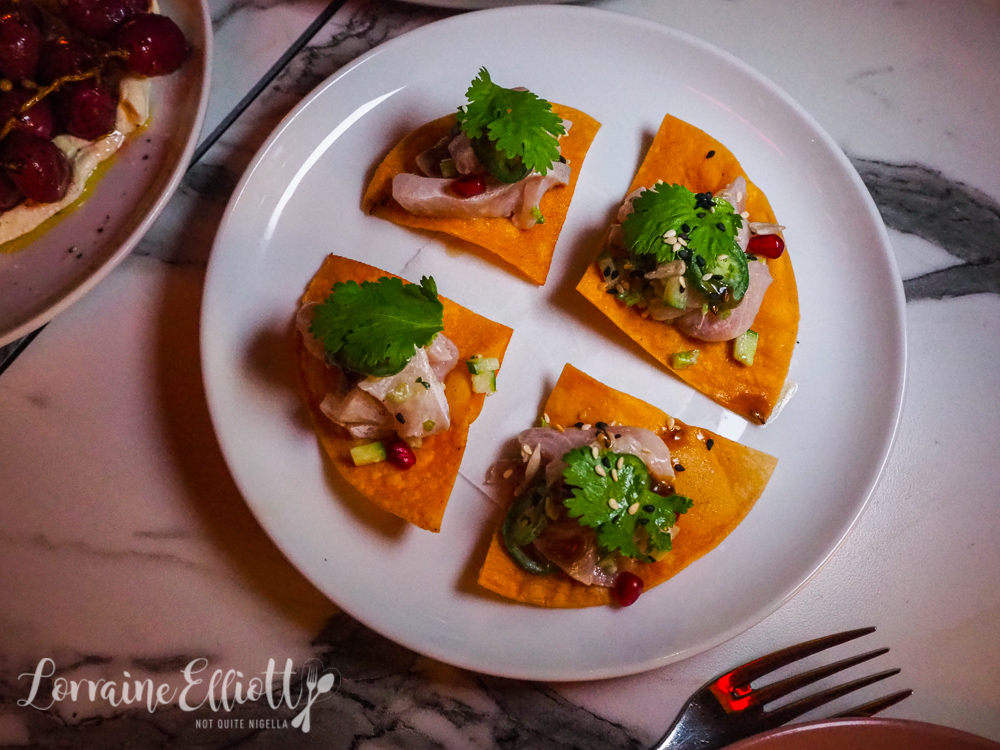 The thing that doesn't quite hit the spot for us are the tostadas. They usually come three to a serve but we upgraded to four. There's the requisite crunchy chip base and the fresh raw kingfish topping, coconut, chilli, onion and cucumber and plenty of lime. It just needs a little balance to the sourness with something like a garlic crema or something to take the edge off the lime. 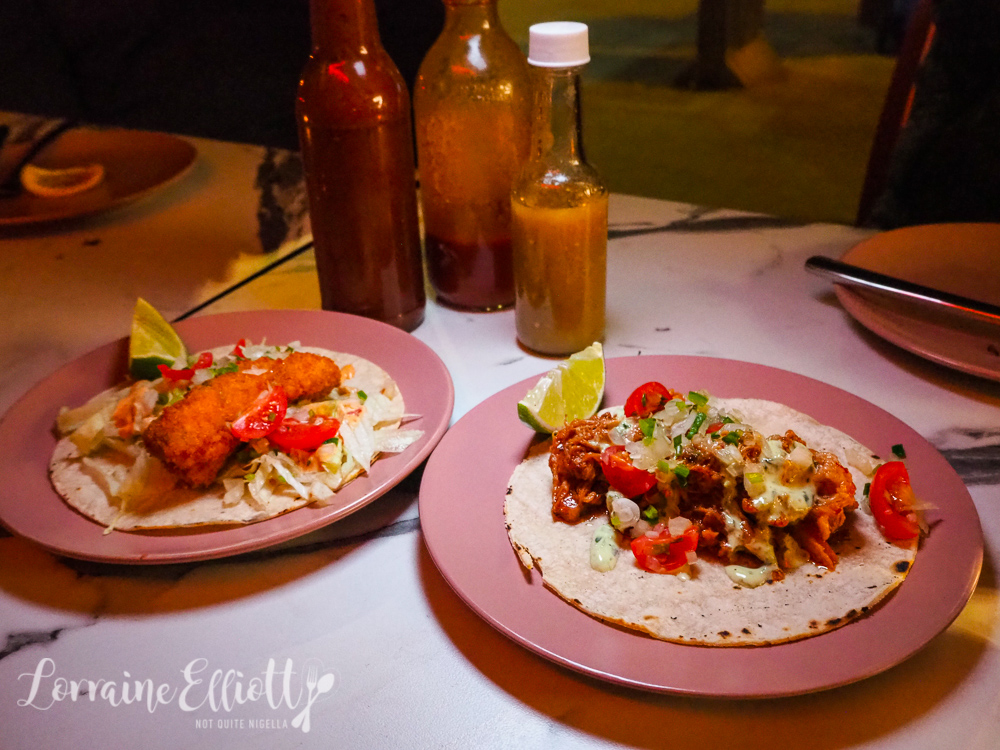 We decide to share a couple of tacos. The panko crusted snapper with pico de gallo, shredded iceberg, charred corn and ancho chilli sauce is nice although I think the snapper fillet is a little small for the taco size so you don't get as satisfying a bite ratio as you might want. 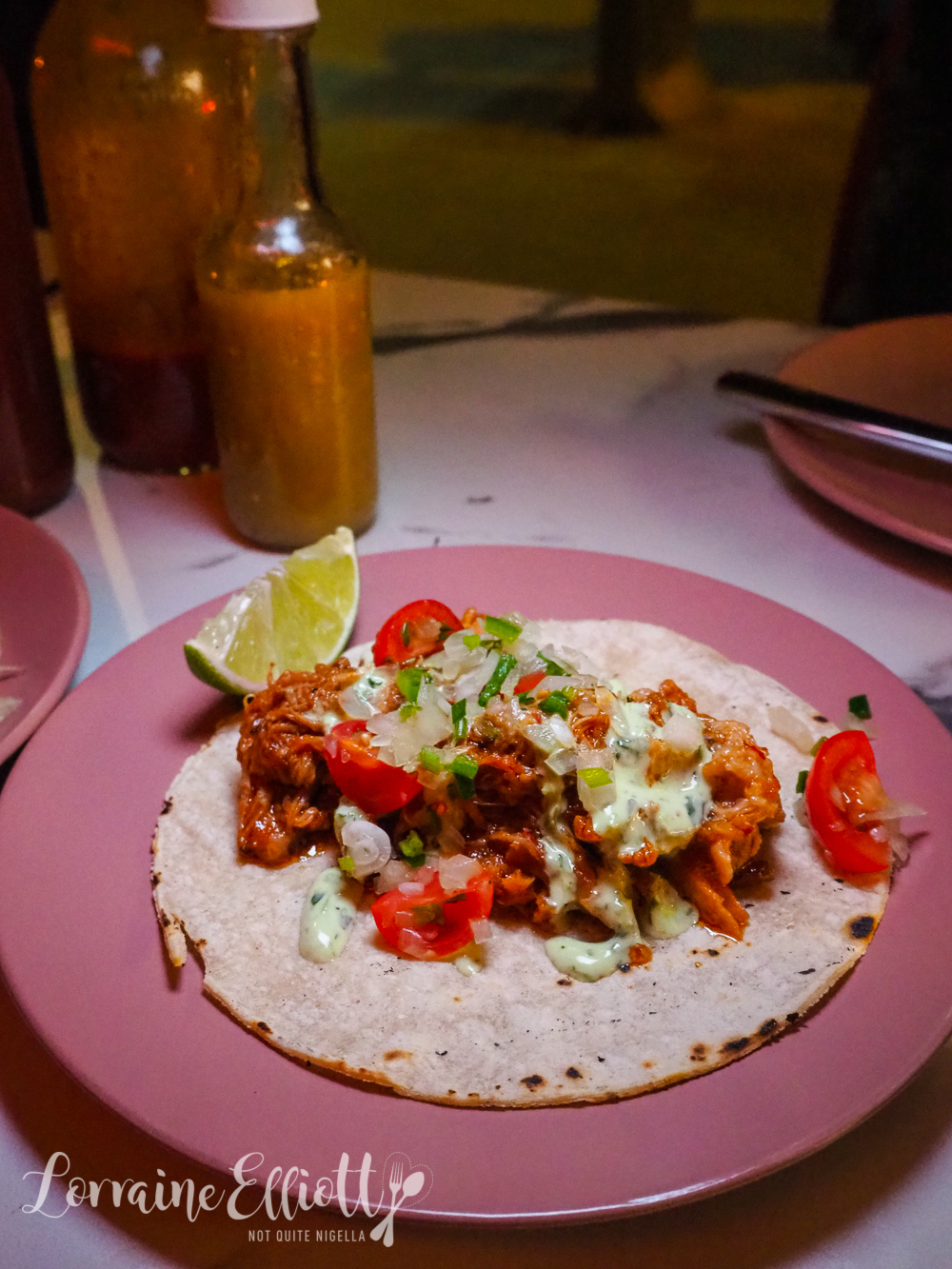 The pork taco is rich and soft with saucy slow roasted pork, pico de gallo and anchoa or anchovy cream that makes this very moreish indeed. It has a nice balance of creaminess with the sweet, spiced intensity of the roast pork. 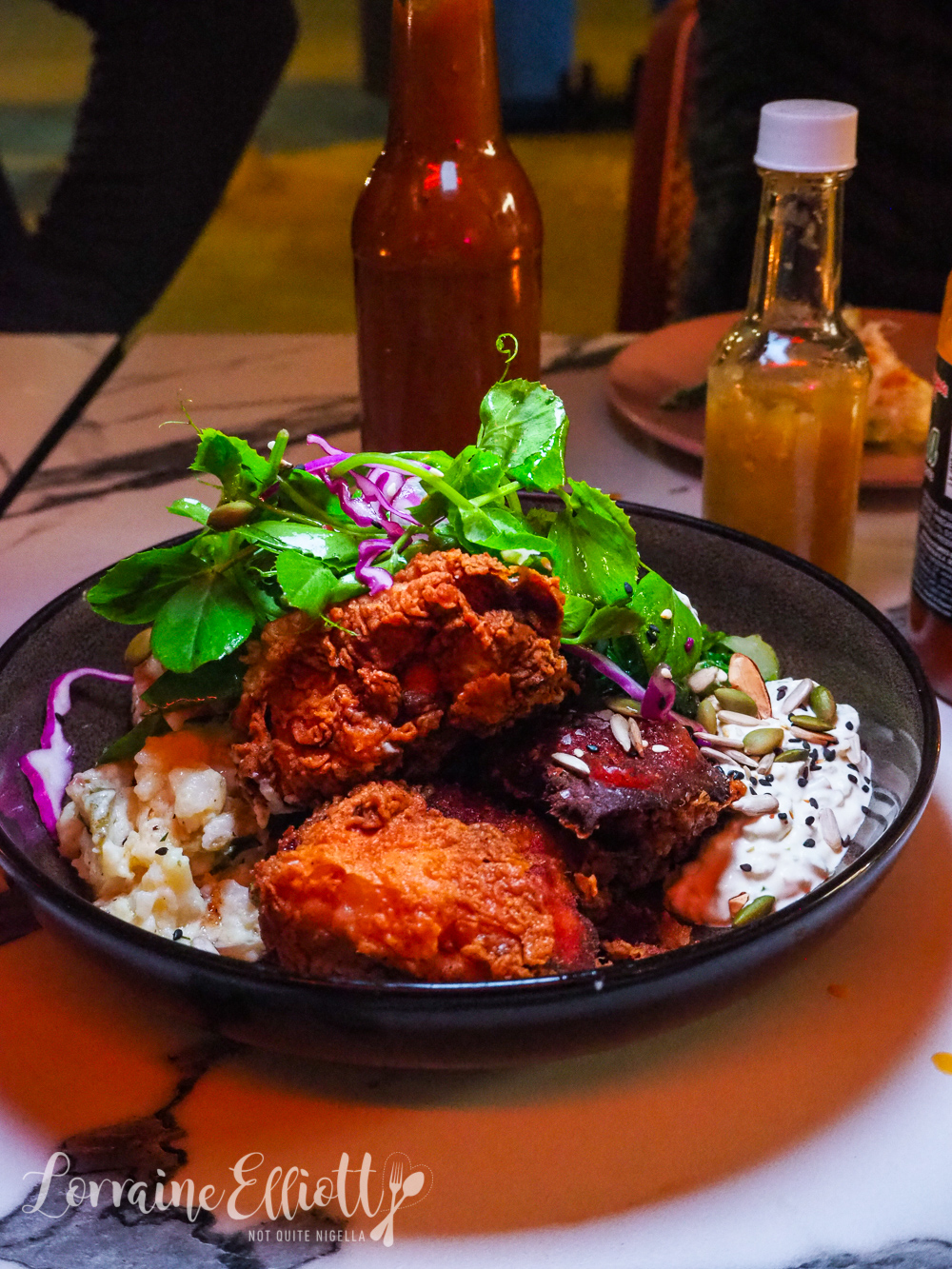 All of the mains are named after celebrities. The Pene Cruz is three pieces of crunchy, spicy fried chicken with salad. There's a warm potato and pickle salad, winter greens, toasted sunflower and sesame seeds and Mexican ranch. I love that the chicken comes with salads as it makes it a meal and we enjoyed both the salad and the chicken equally. 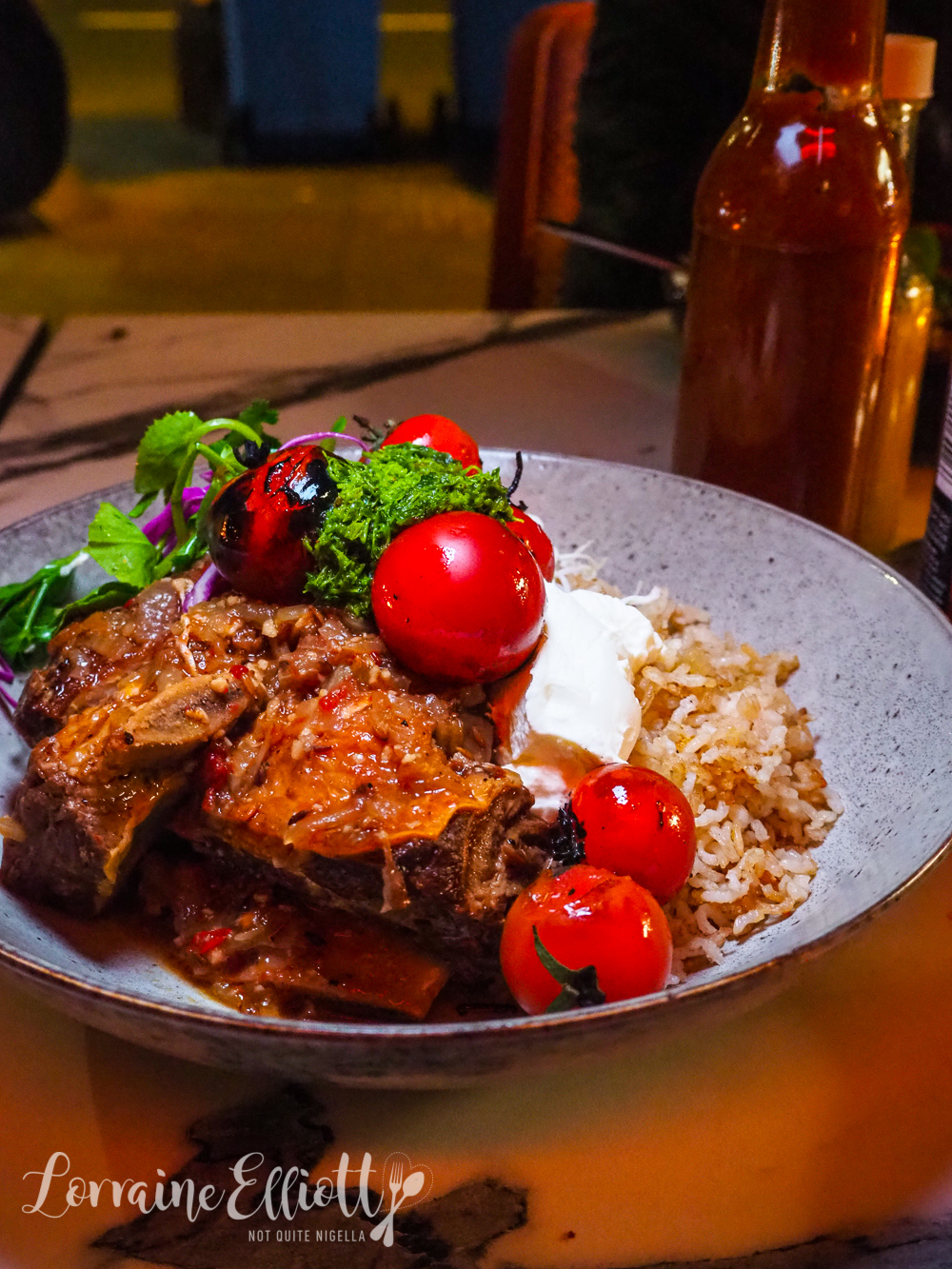 Antonio Banderas has the short rib named after him. It's a braised beef short rib in Filipino adobo sauce with crispy rice, green cabbage slaw, chimichurri, roasted tomatoes and labneh and damn it's good. The short rib is soft and melty while the crispy textured rice and labne is also a hit lending texture and creaminess. 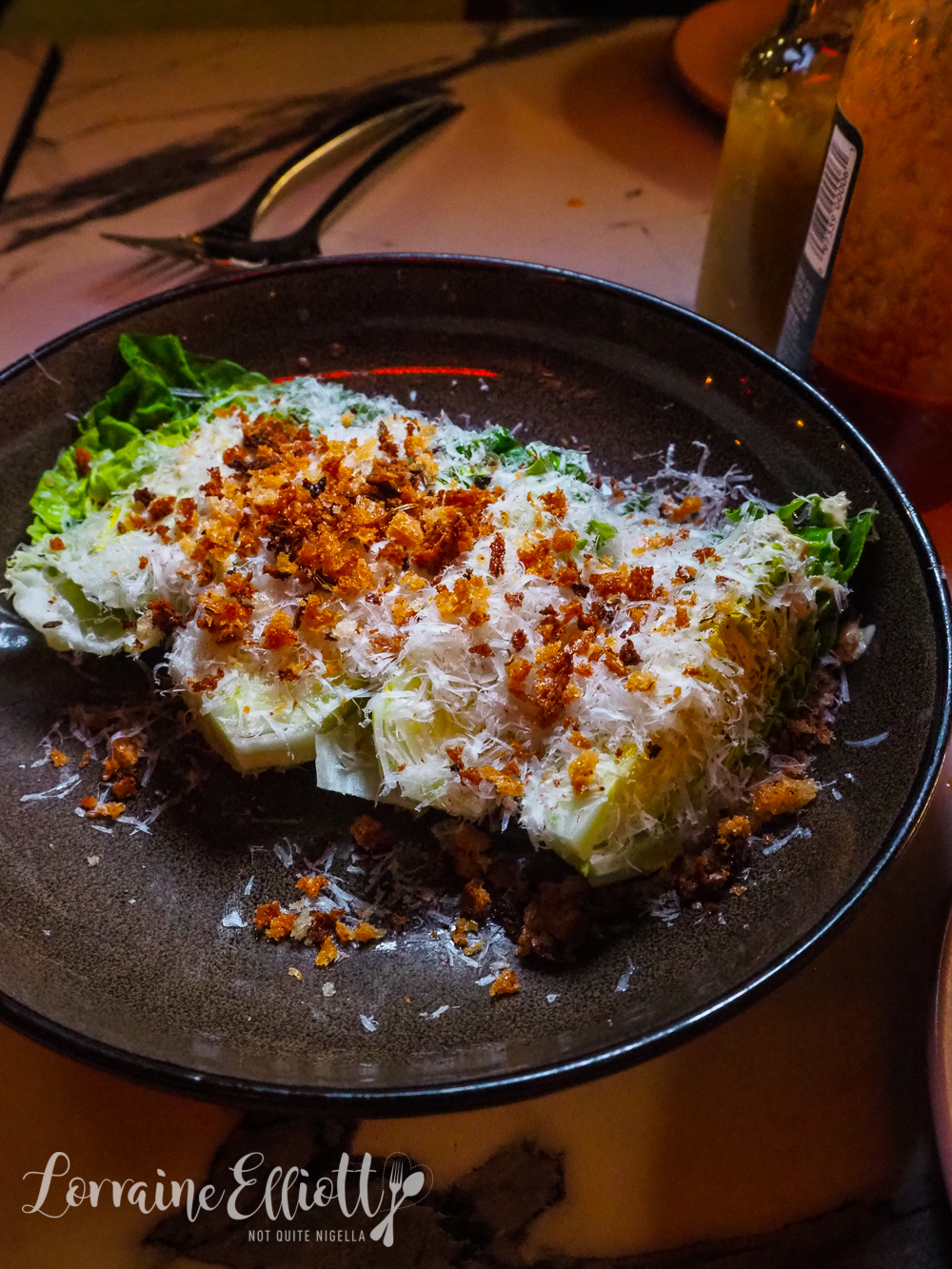 We also ordered the baby gem lettuce to go with the meatier mains. It's a take on a caesar salad made with baby gem lettuces. It's a crisp, fresh salad with just the right amount of chimichurri, pangratatto and parmesan cheese on top as well as a satisfying crunch. 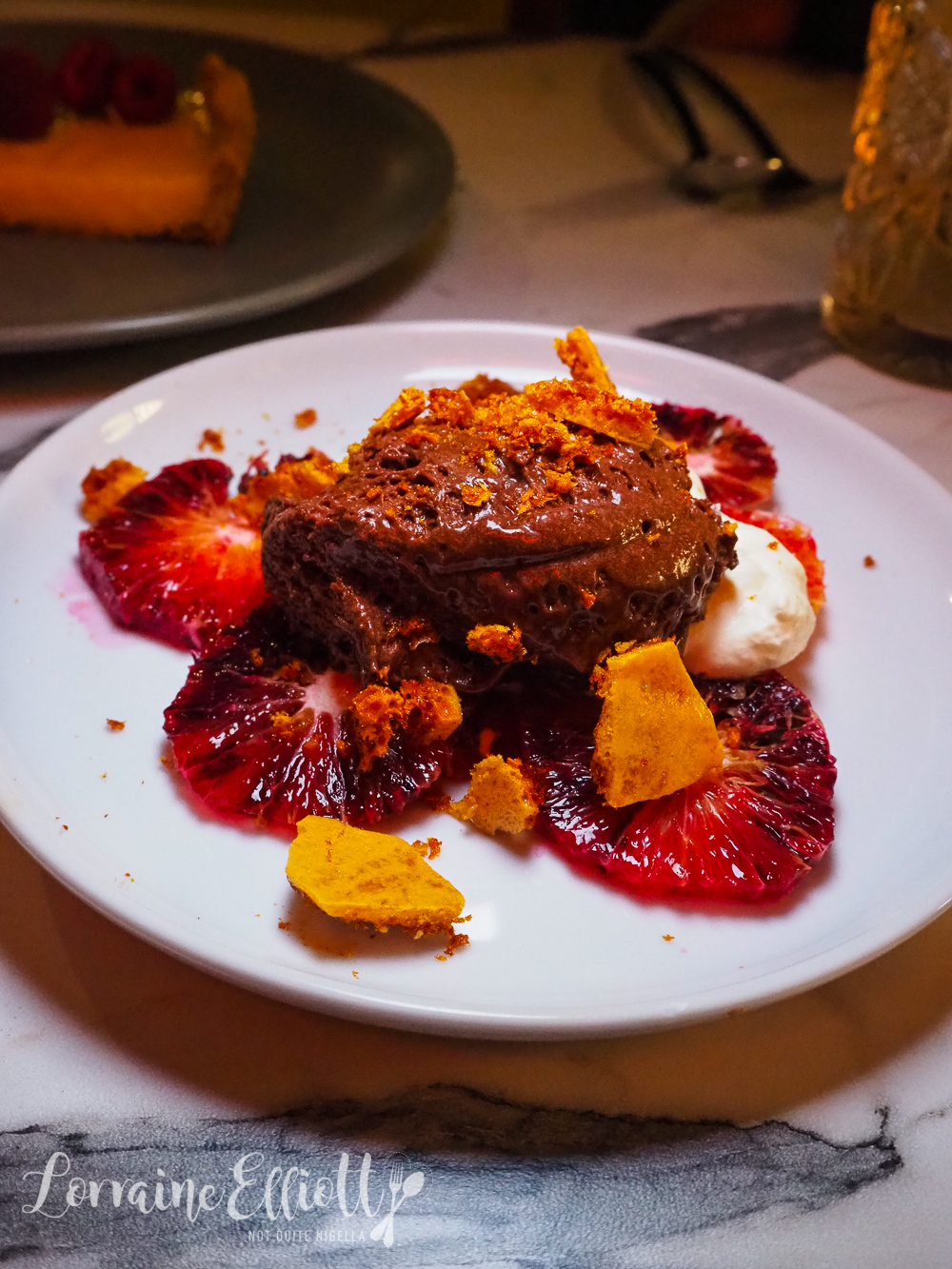 There are two desserts on the menu. The chocolate mousse has honeycomb shards and a double yogurt cream and sliced blood oranges on the side to balance the sweetness of the light, creamy mousse and the honeycomb pieces. 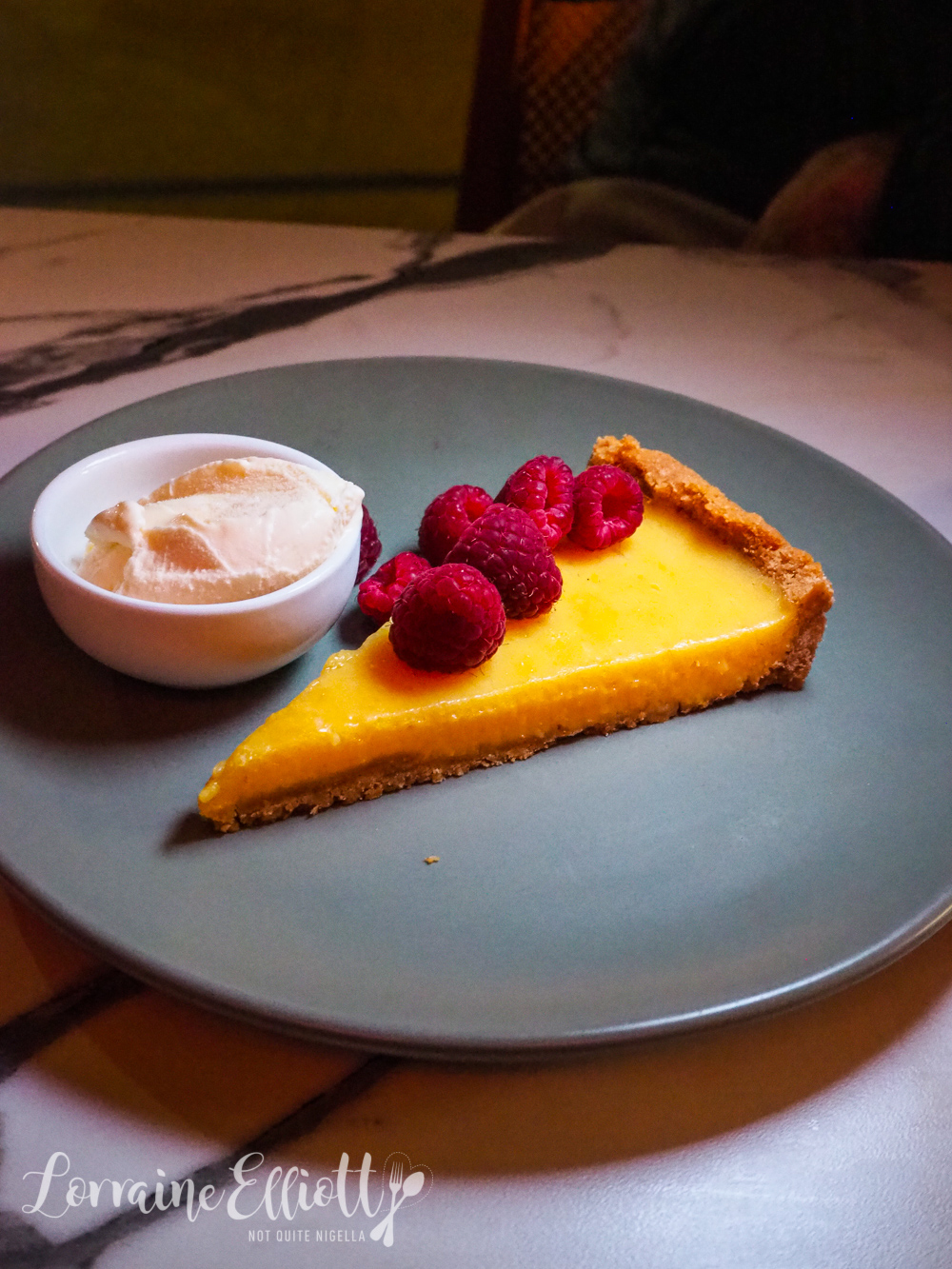 However everyone loves the lemon tart with its sharp pucker inducing curd filling, the sturdy but not too thick base and the scoop of vanilla ice cream on the side. And added bonus: during dinner Teddy and Thor played wall together under the table!