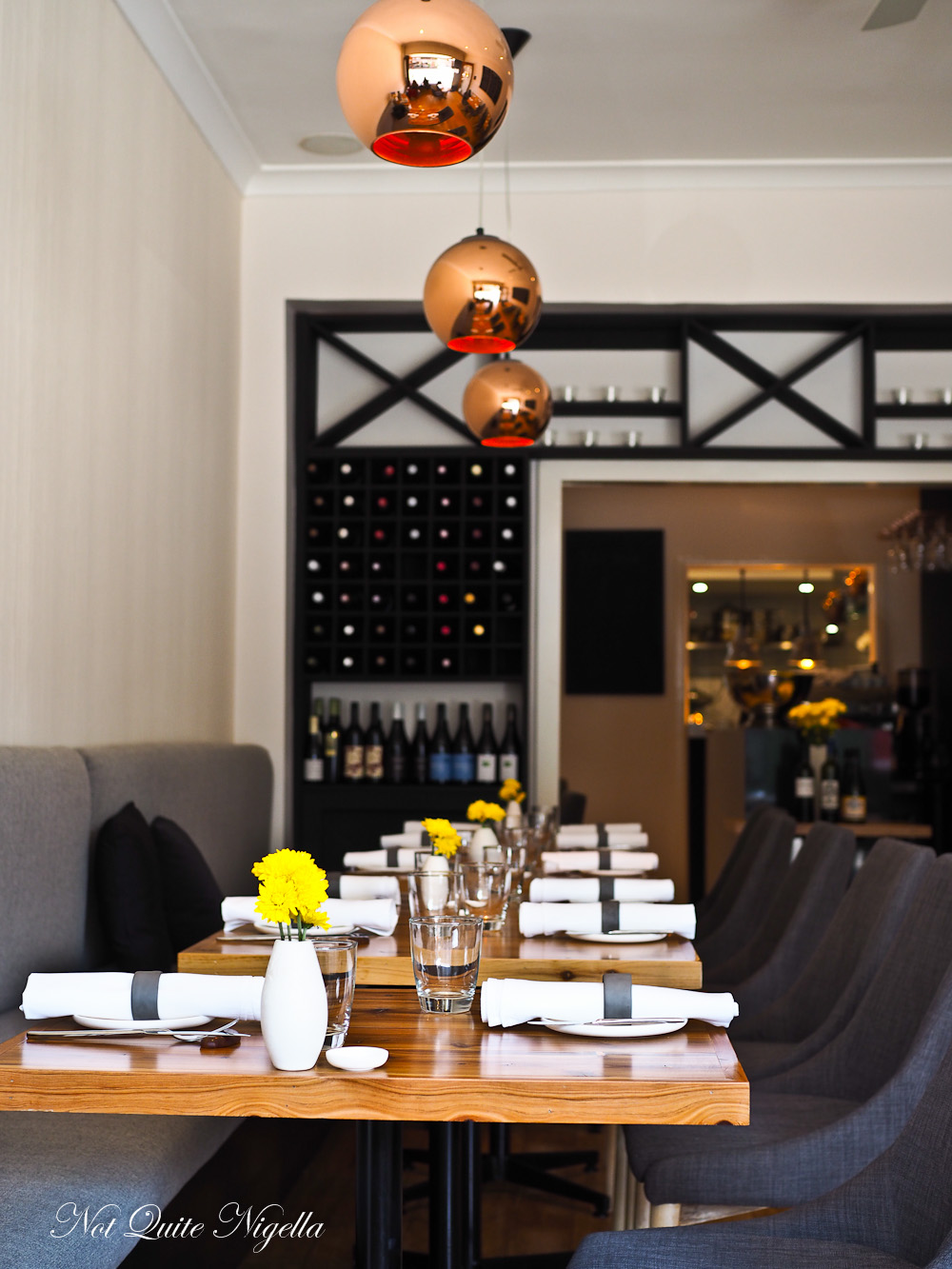 Belgian food is usually associated with beer, mussels and chocolate. At Moxhe in Bronte, the food is modern Belgian and Australian with plenty of seafood options. A chalkboard displays a range of wines by the glass and the specials while the menu has a neat selection of repast options.

I am careful not to complain about the life of a travel blogger because of course it is a dream come true. And there are surprising benefits to even things like jetlag. For example I recently started falling asleep at 10pm and rising at 6am. Something I've never managed to achieve in my whole life no matter how hard I try as I am usually a night owl. 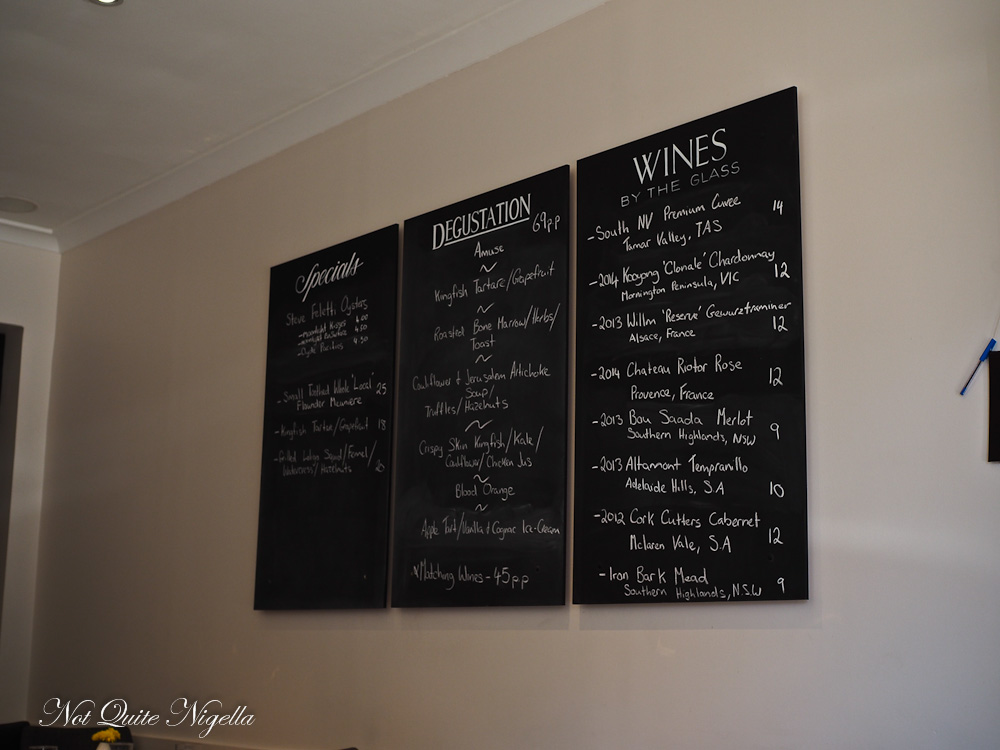 So at 6:30am one Sunday morning I found myself making a lasagna. I then put on two loads of laundry and then edited some blog posts before I started thinking "Surely it's time for lunch with Amanda now?". 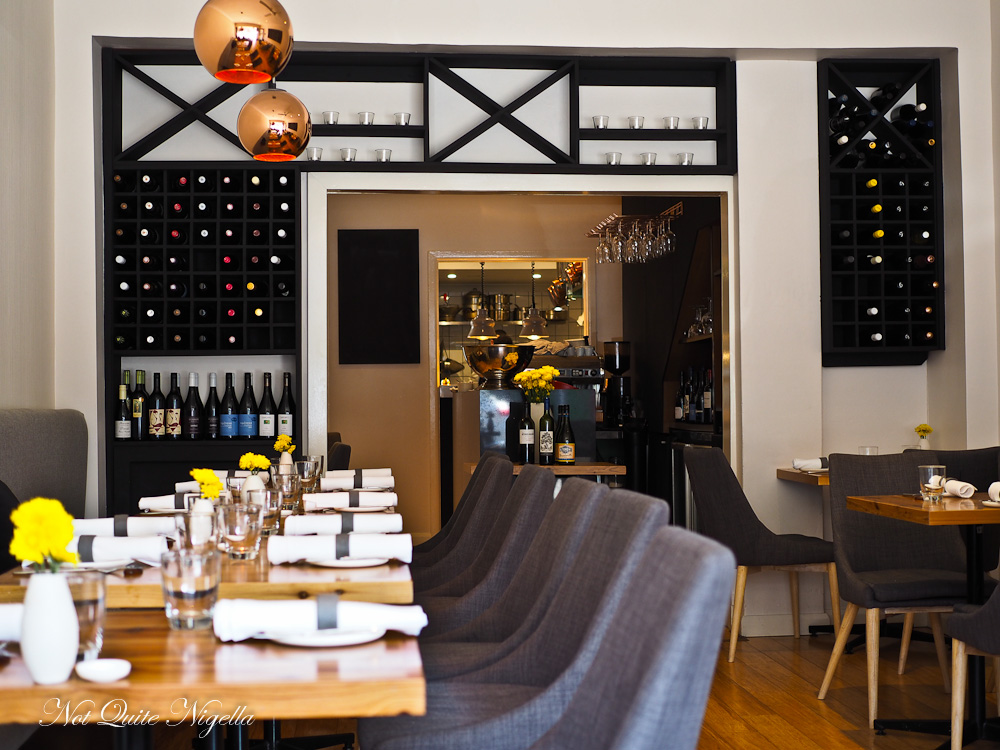 A few hours later I met my friend at Moxhe on Macpherson Street in Bronte. Both of us happened to be in that strange twilight jetlagged state where we would gabble for ages eager to chat about everything that we hadn't talked about since our last catch up which we would then alternate with large drawn out yawns.

Moxhe is a Belgian restaurant - it is actually pronounced "Mox" and refers to the small town in Belgium in which chef David Coumont hails from. He is in the kitchen while his partner Helen Diab tends to the floor. And the poor woman has to come back several times to take our order because we are too busy talking! 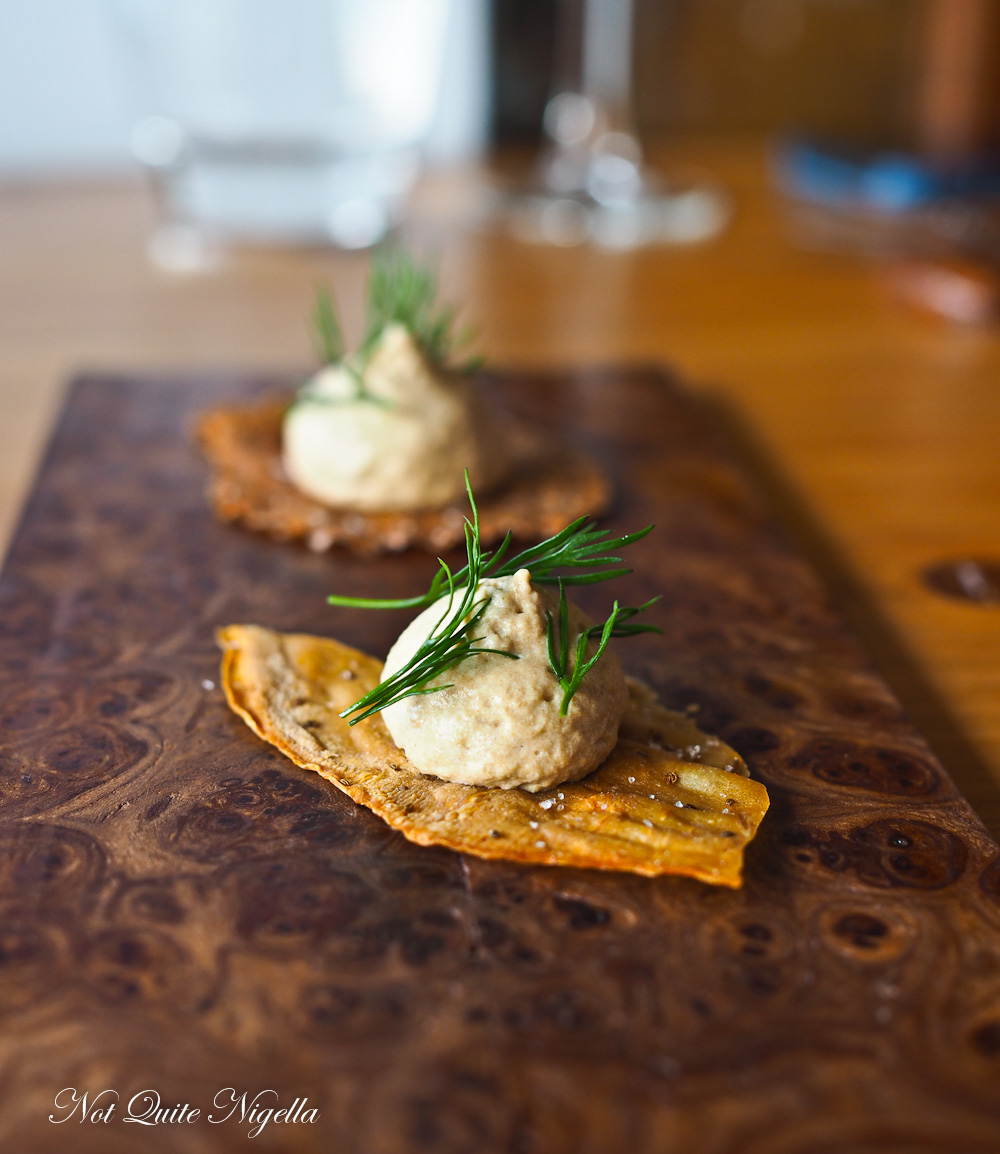 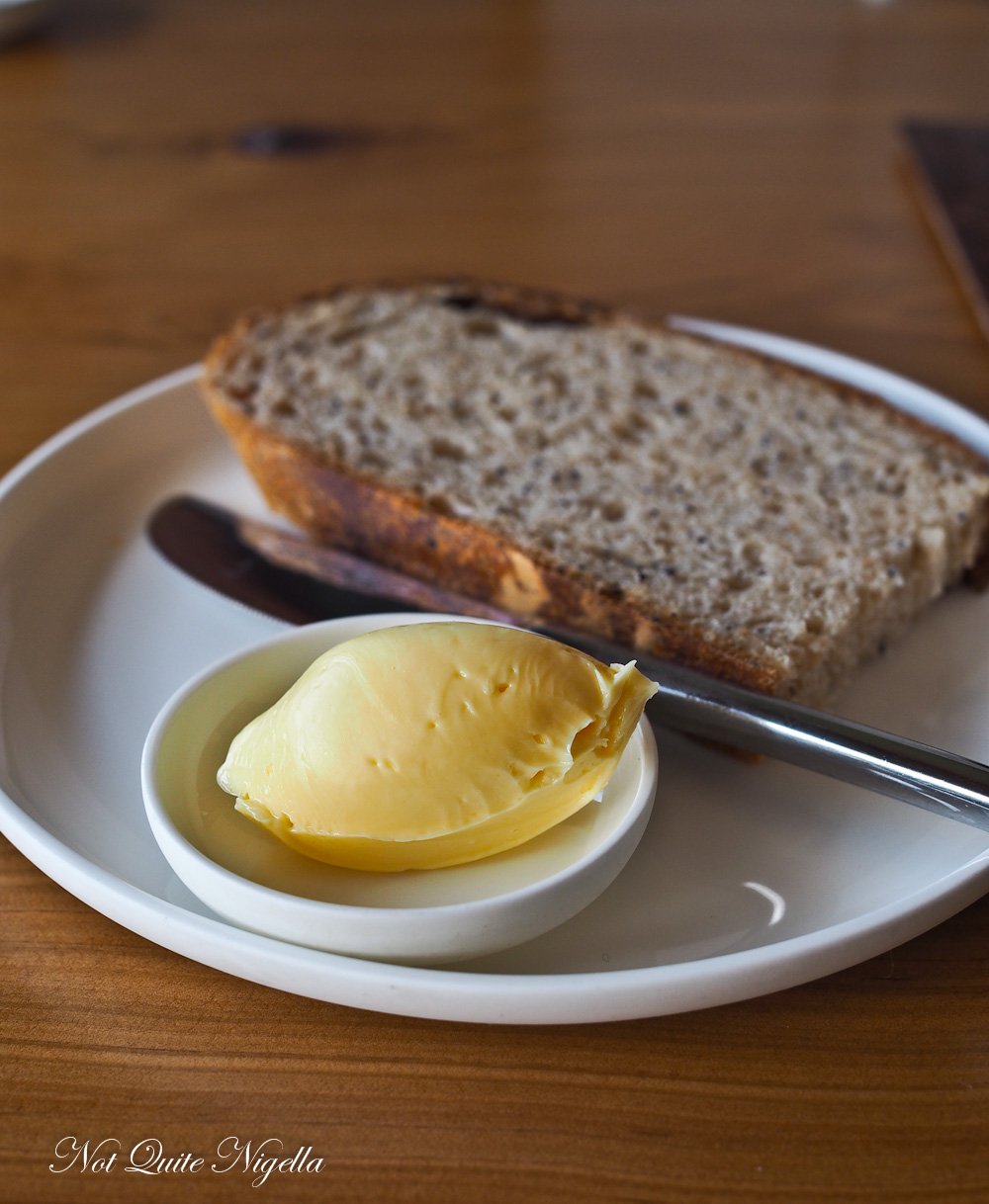 There is a chalkboard with some tempting specials as well as a range of three types of Steve Feletti oysters from Bateman's Bay. Amanda orders some of those while I am tempted by the bone marrow and the truffle soup. In the end I go for the soup. But first there is a little amuse bouche for each of us: a celeriac chip with a feather light, creamy mussel mousse. This is followed by a house made grain bread that has come straight out of the oven which has a light crunchy crust and soft interior. 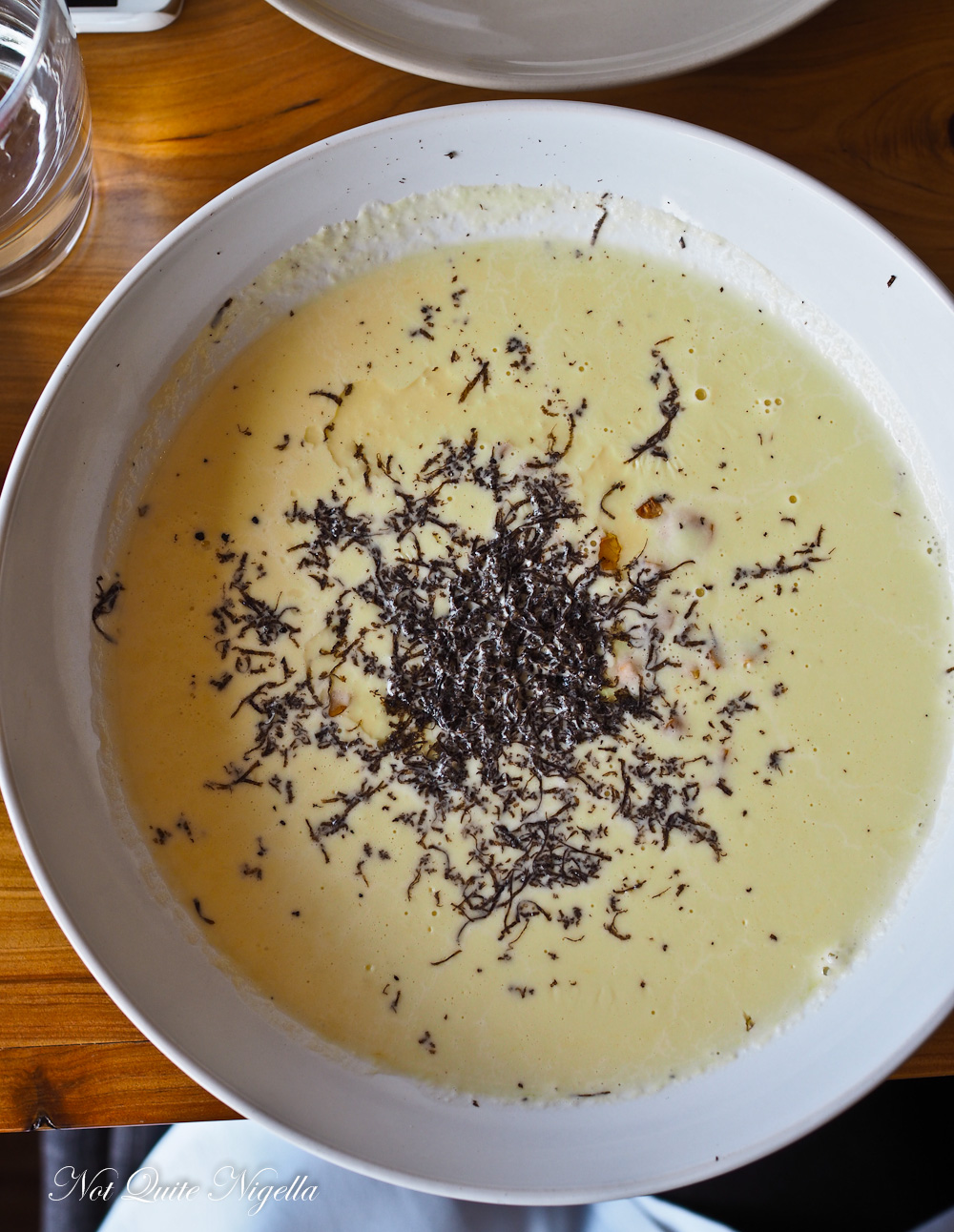 The soup comes out and it has a generous serving of fresh truffle on top. Helen tells us that they picked the truffles themselves from the Southern Highlands. The creamy Jerusalem artichoke soup is divine and generously portioned and the truffle is aromatic and underneath the surface lies cracked, crunchy hazelnuts. 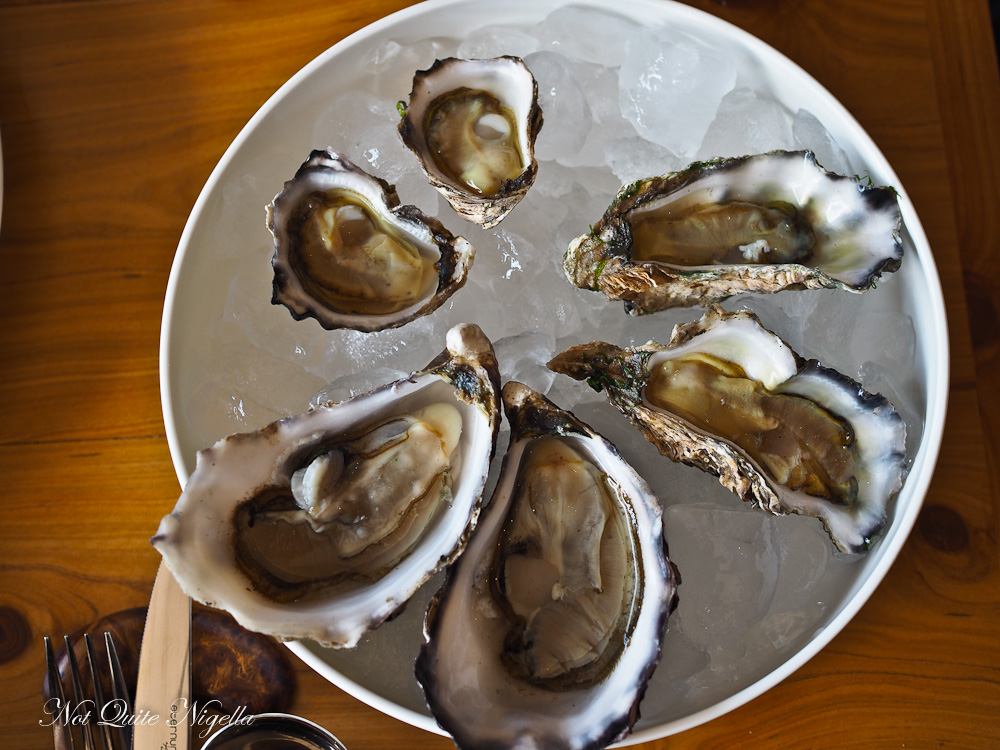 I try one of Amanda's oyster the Moonlight Kisses which has to be one of the most romantic names for an oyster. It's small and briney and packs a nice punch of zincy flavour. She also has Moonlight en Surface and Clyde River Pacific oysters. They're served with kampot pepper and a red wine vinaigrette and shallot dressing and lemon. 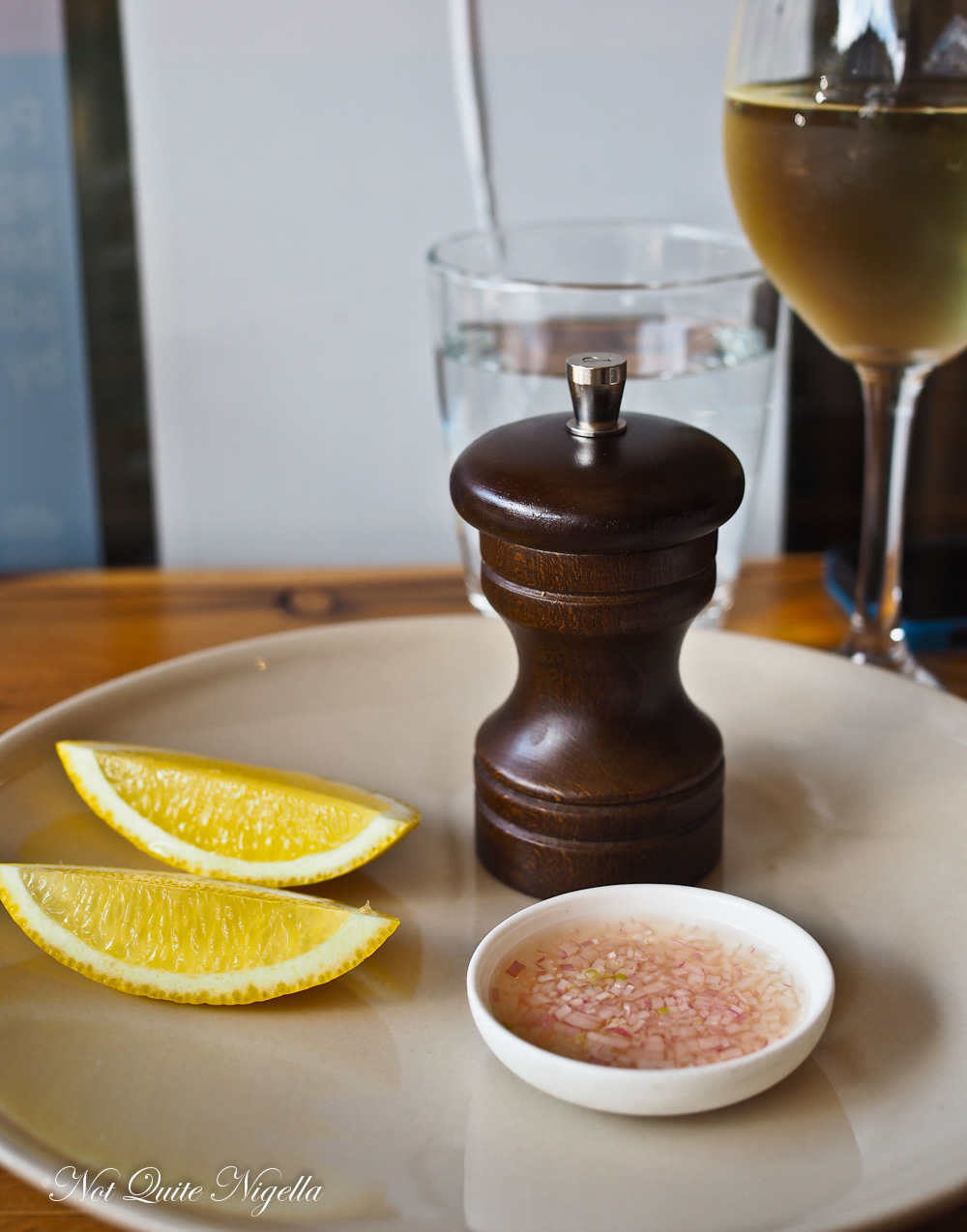 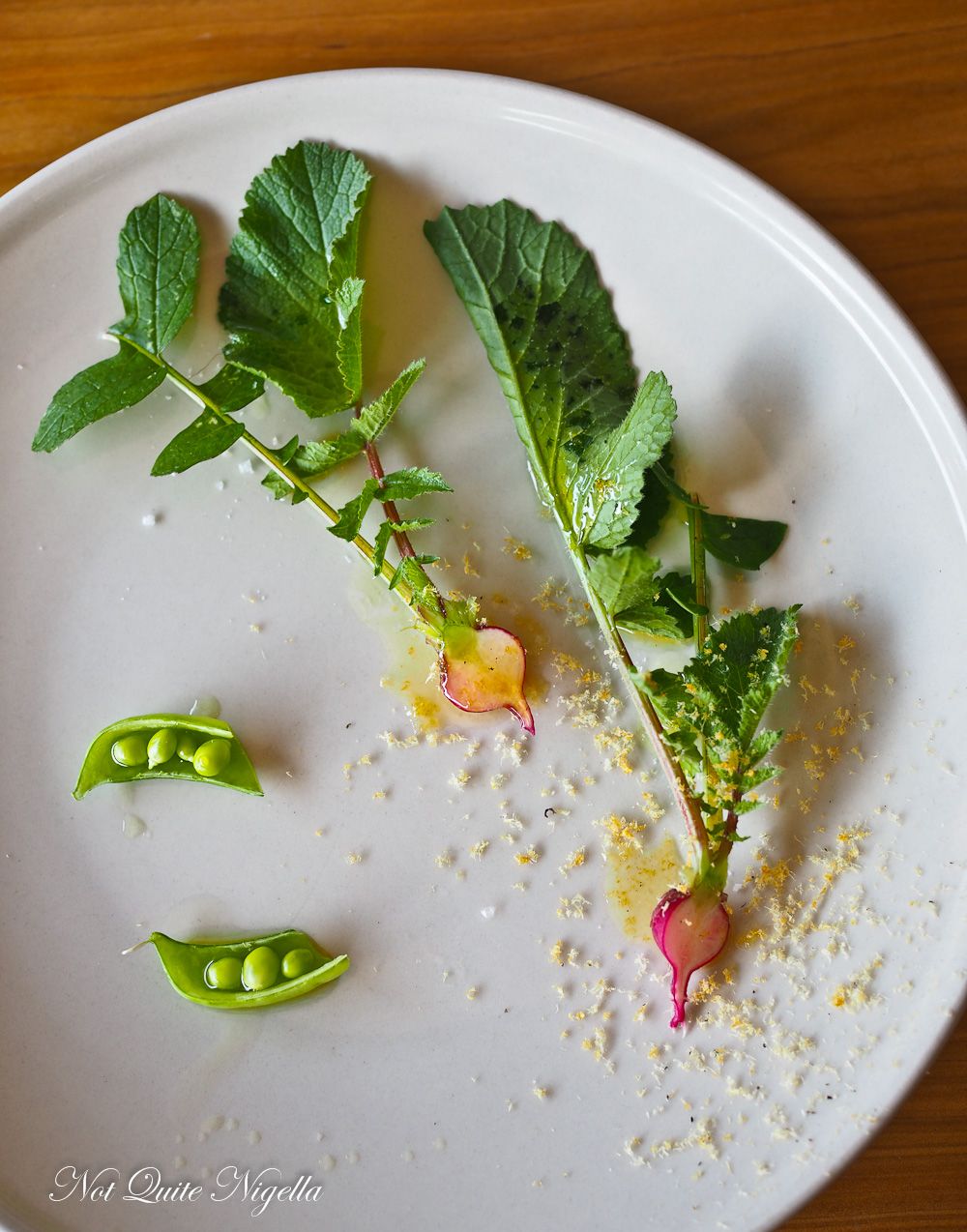 Before our mains arrive, there's another surprise from the kitchen and it is fresh vegetables from the garden in the back. There are baby peas and a young radish dusted with shaved bonito and dressed with oil. They're superbly crunchy and fresh and I could snack on them both all day long. 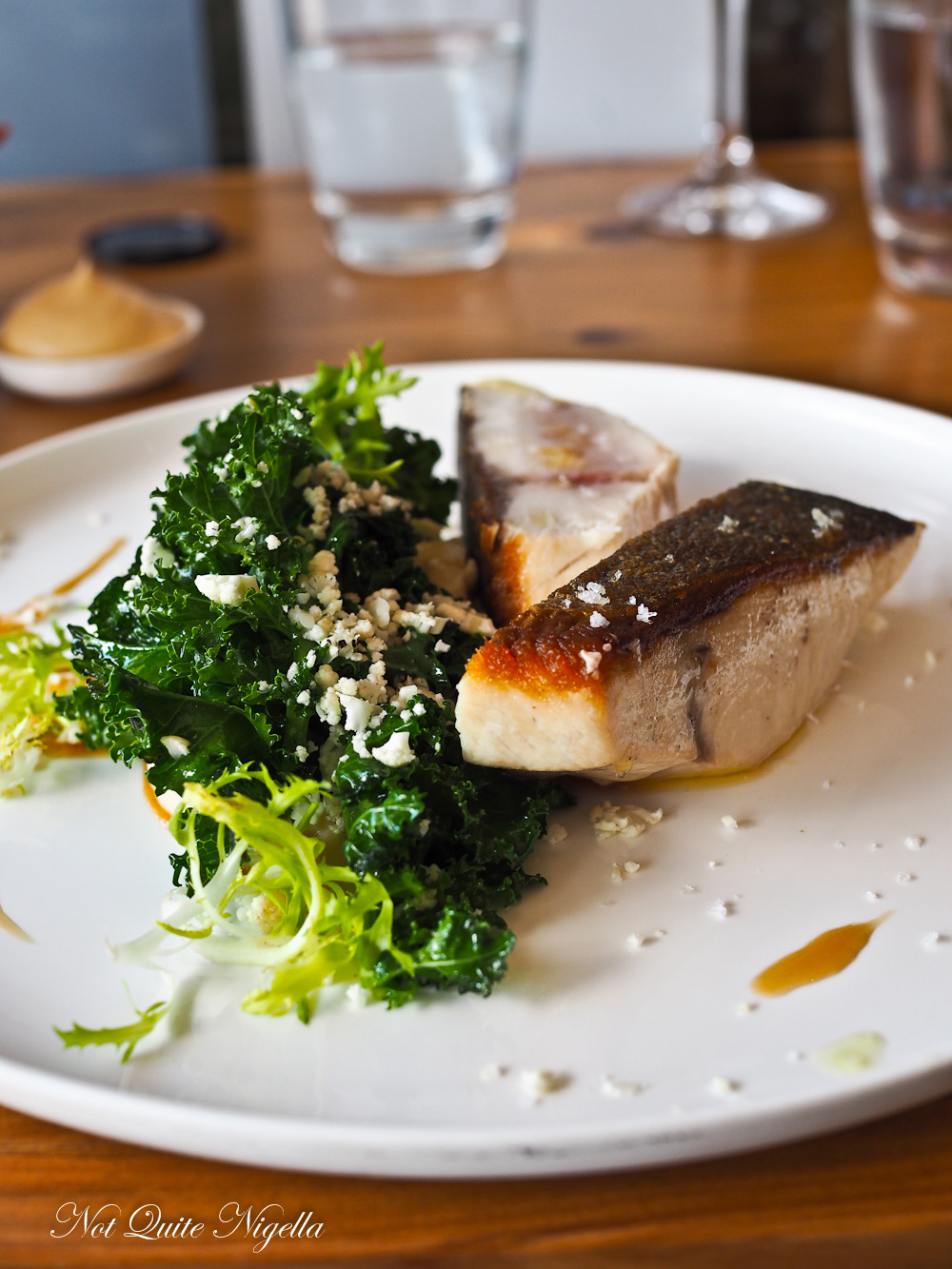 Our mains arrive and I try some of the kingfish. It is cooked rare in the centre which is how I like it as kingfish can tend to be a bit dry when cooked through. The crispy skin is fantastic against the soft fish and it is paired with a cauliflower puree, kale from the garden and chicken jus. The sides are rich against the clean tasting fish. 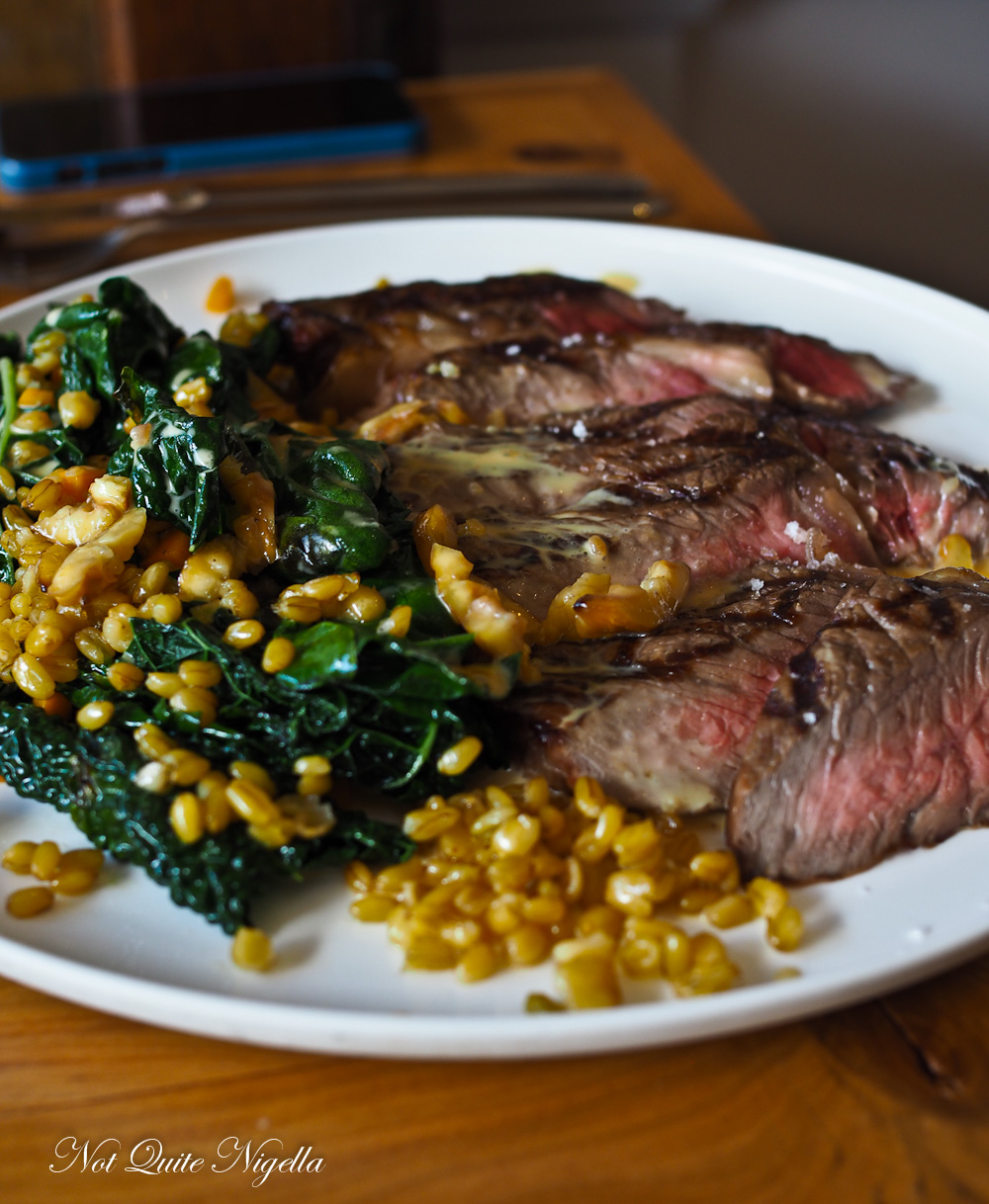 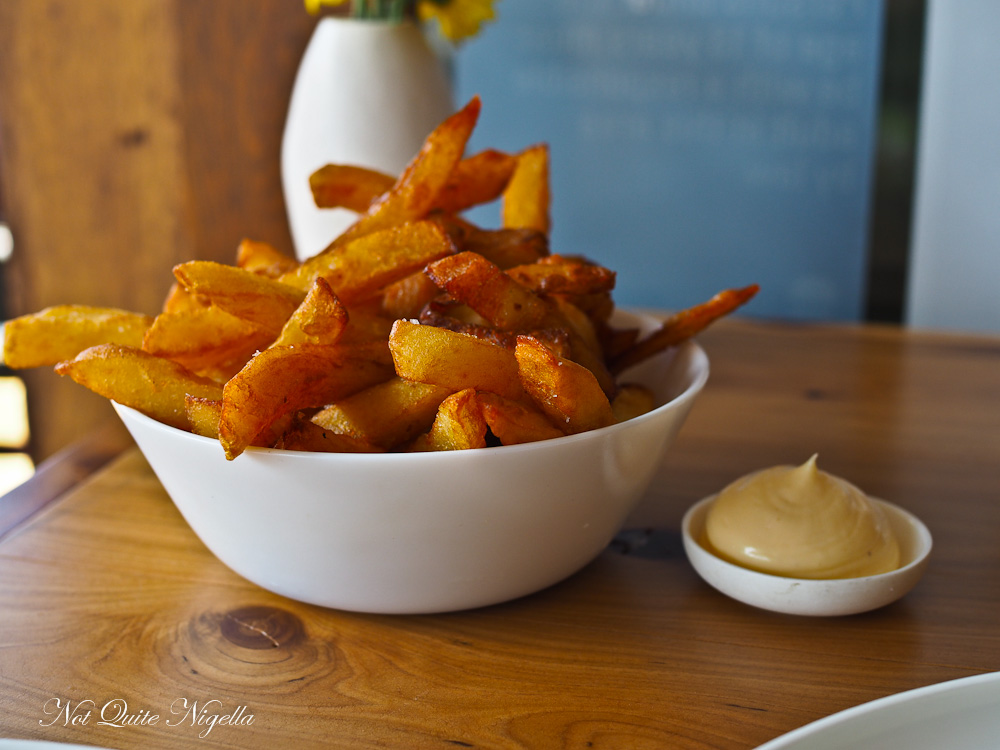 With the Belgian background we had to try the fries and they do not disappoint. Hand cut and twice fried they're crispy and moreish and served with a Belgian mayonnaise. 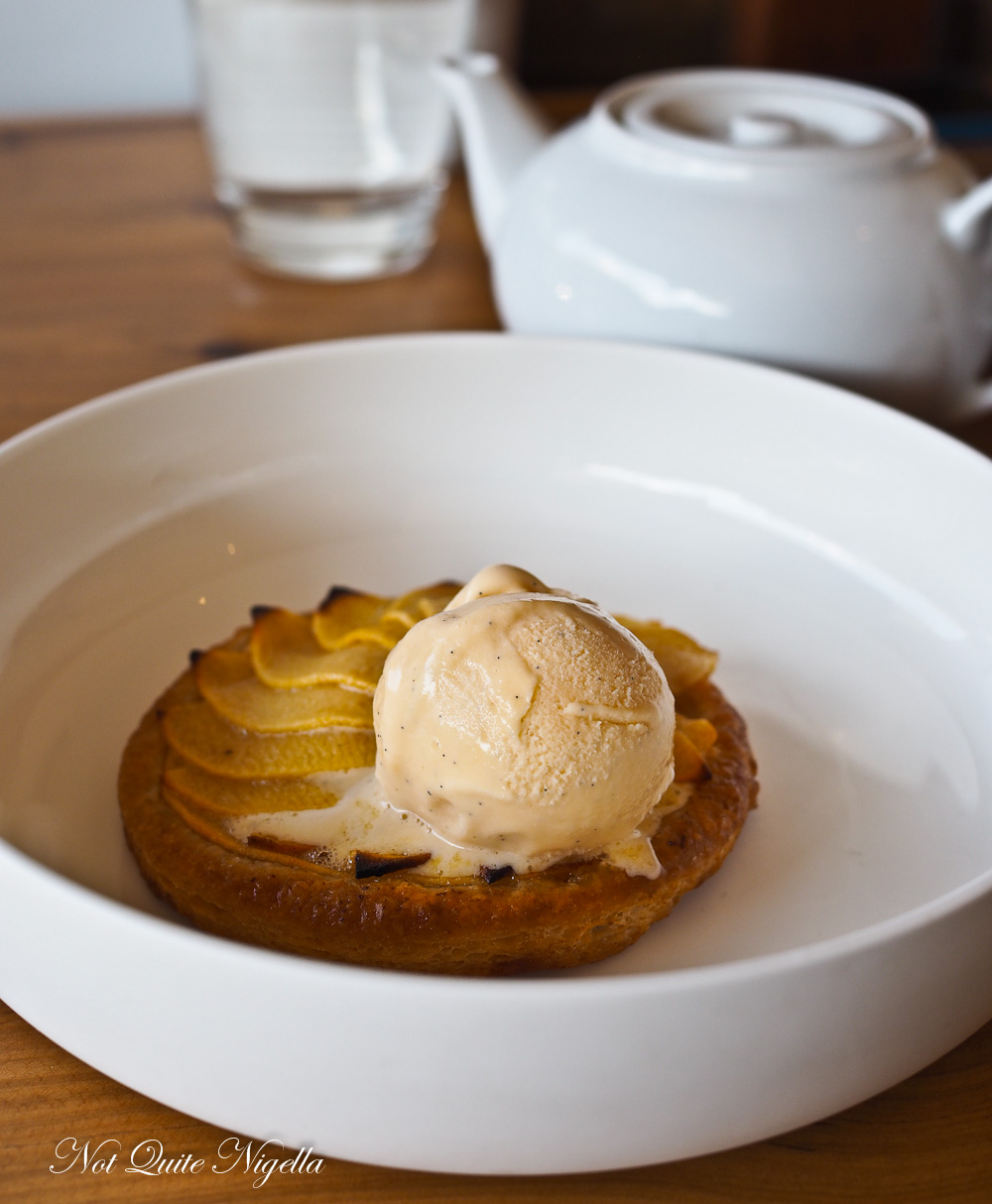 Amanda didn't have room for dessert but you simply can't stop me. There are two desserts on the menu: an apple tart and a lemon sorbet. The apple tart is made to order and requires 10 minutes wait but that's no issue. The fine apple tart comes with a crisp pastry over which thin slices of apple are interleaved. There is also a scoop of vanilla bean and cognac ice cream on the side. It's simple but well done and I'm glad that none of this goes to waste as Amanda tries the last few bites. 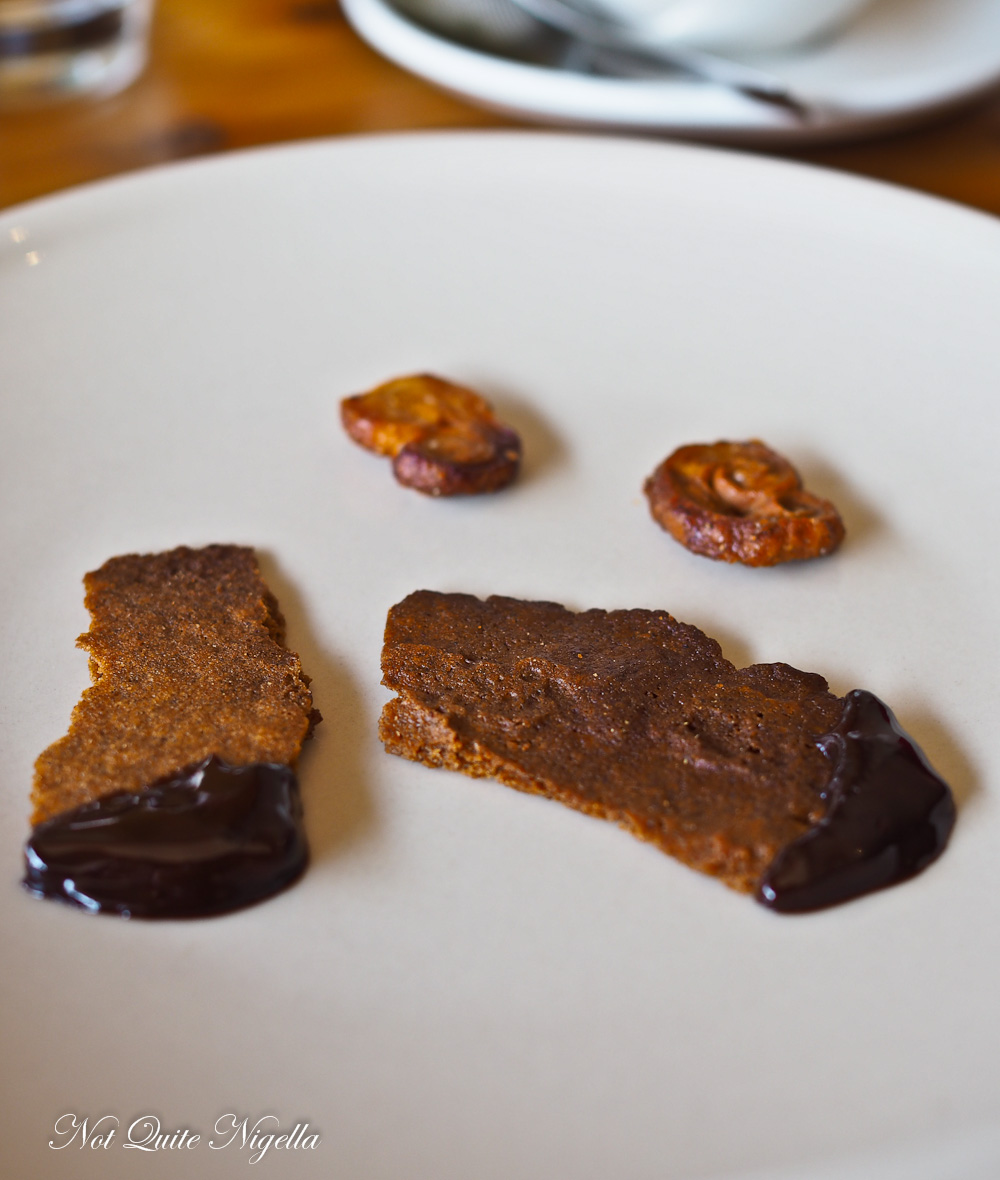 They're not quite done with us yet and the theme here seems to be lots of lovely little extras. They bring out some tiny palmiers and speculaas biscuits dipped in dark chocolate.

So tell me Dear Reader, what time do you get up in the morning and have you always been a late or early riser? And do you mind waiting for dishes that are cooked to order like the apple tart or do you tend to give them a miss?